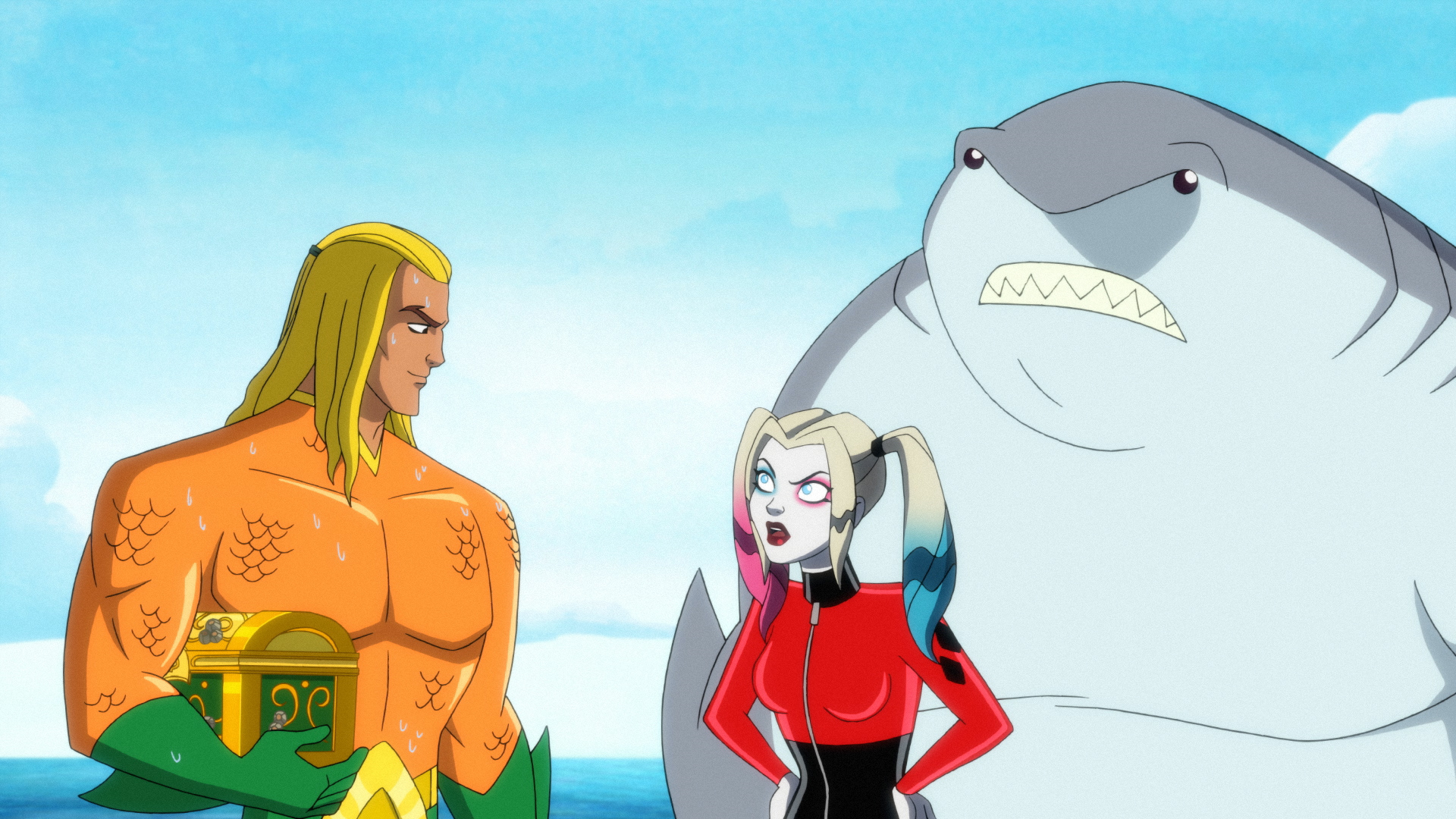 After weeks of planning and dreaming, Harley Quinn has finally made it into the Legion of Doom! This week’s episode of DC Universe’s Harley Quinn was an initiation to remember, because nobody throws a party like the Legion. Let’s break down episode 8, “L.O.D.R.S.V.P.!” 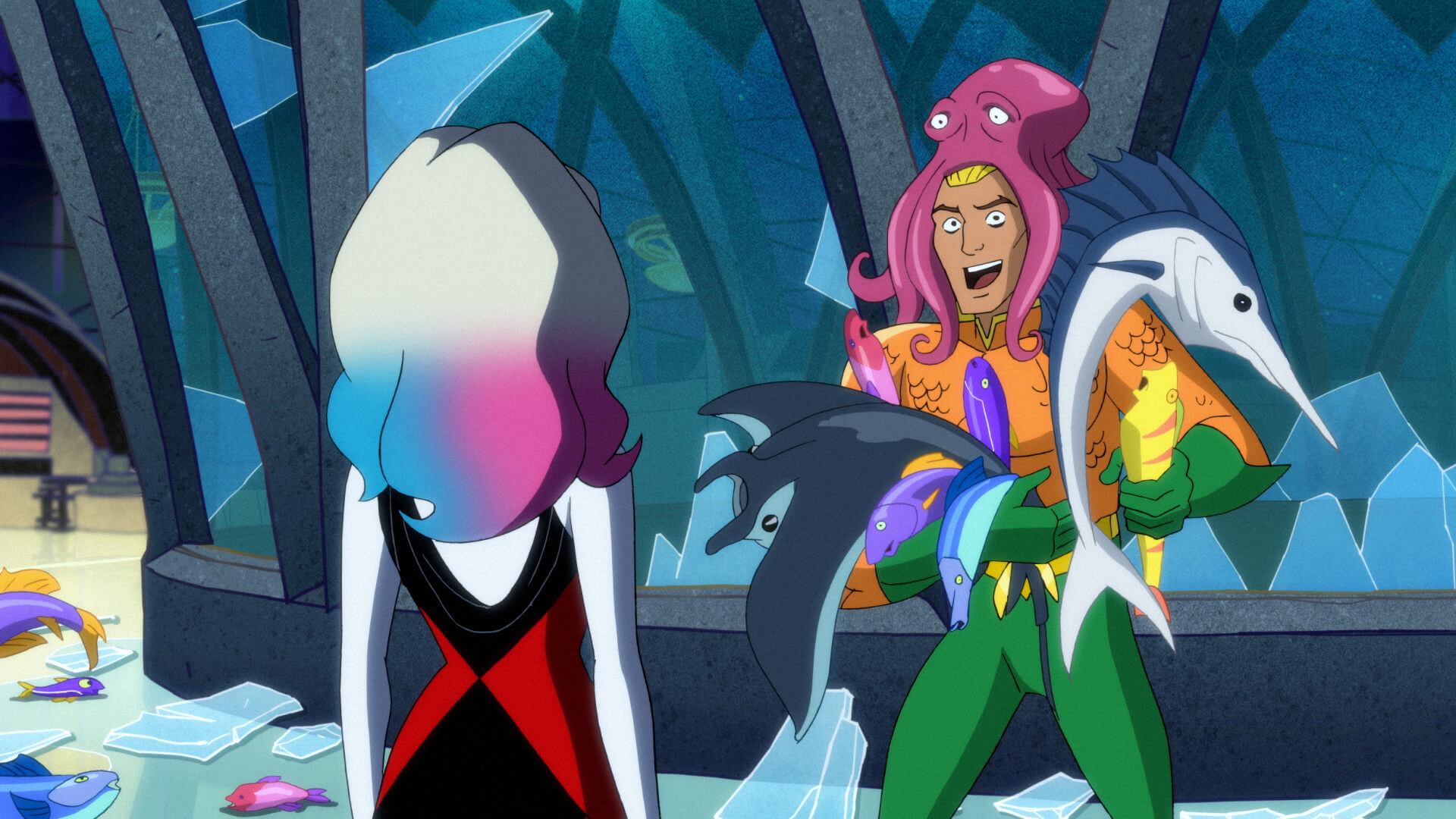 * During the first act of the episode Aquaman made a “that’s what she said” joke which is probably the first time he’s done so in any form of media. As shocking as it was to hear such language from the King of Atlantis, we have to admit it was a sick burn.

* Bane may be known as the man who broke the Bat, but after this week we’ll never stop looking at him as the guy who gleefully stomped on helpless fish. There was no reason to murder the fish that way Bane, other than being a colossal dick.

* This episode gave us more info on King Shark’s genitals than we ever needed to hear. “Shark genitalia is very hard to see, until it isn’t.” We’re not sure what the story behind that is, but we don’t want to know. 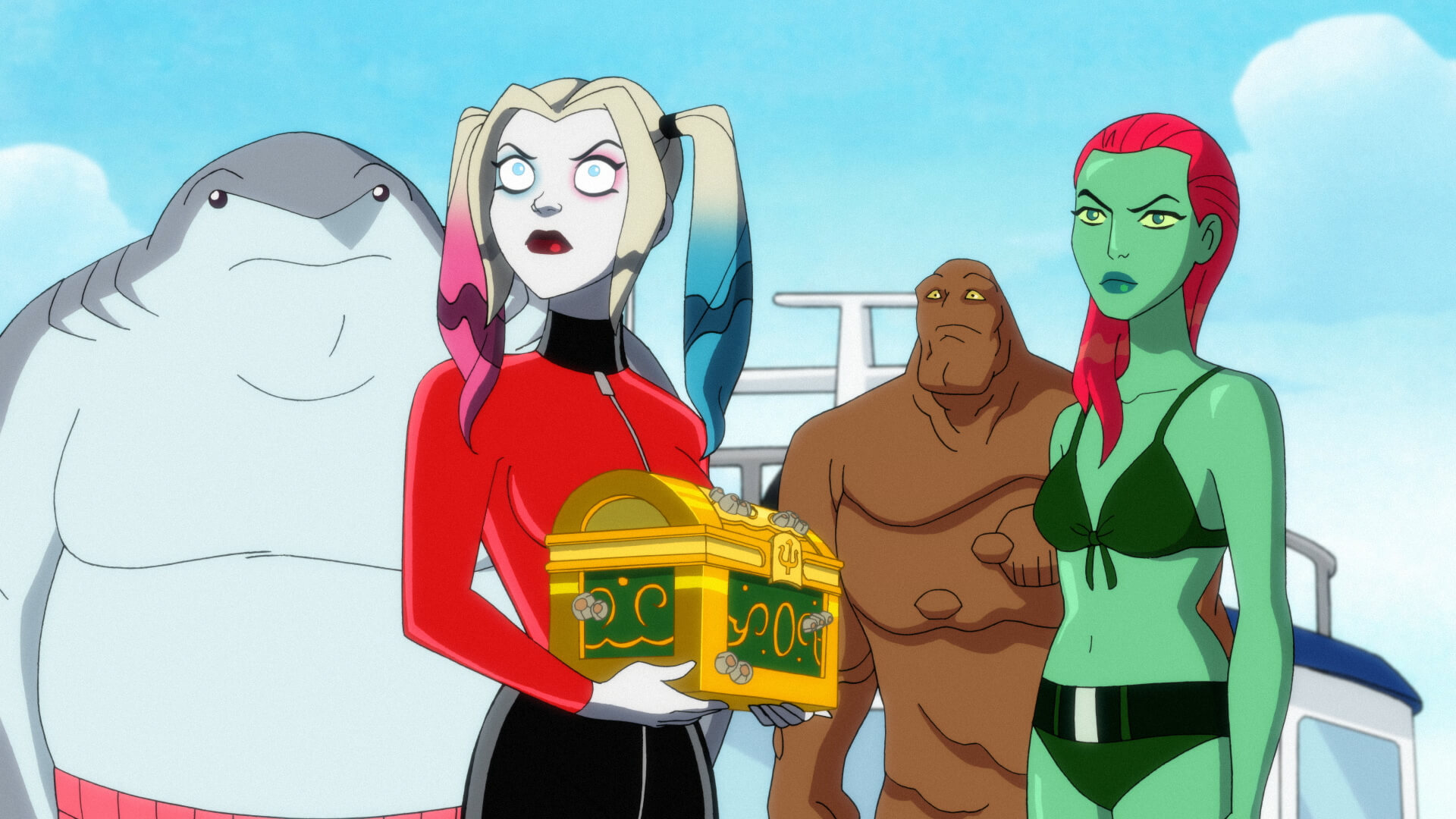 A Legion of Doom party is a high-class event, so the gang behaved themselves and only dropped 5 F Bombs this week. All things considered, that’s pretty restrained for them. This brings the series total to 81.

Harley now has a series total of 36, Ivy has 22, and King Shark has 2. Now that they’re in the Legion of Doom, do you think they’ll clean up their language? Not a F’ing chance! 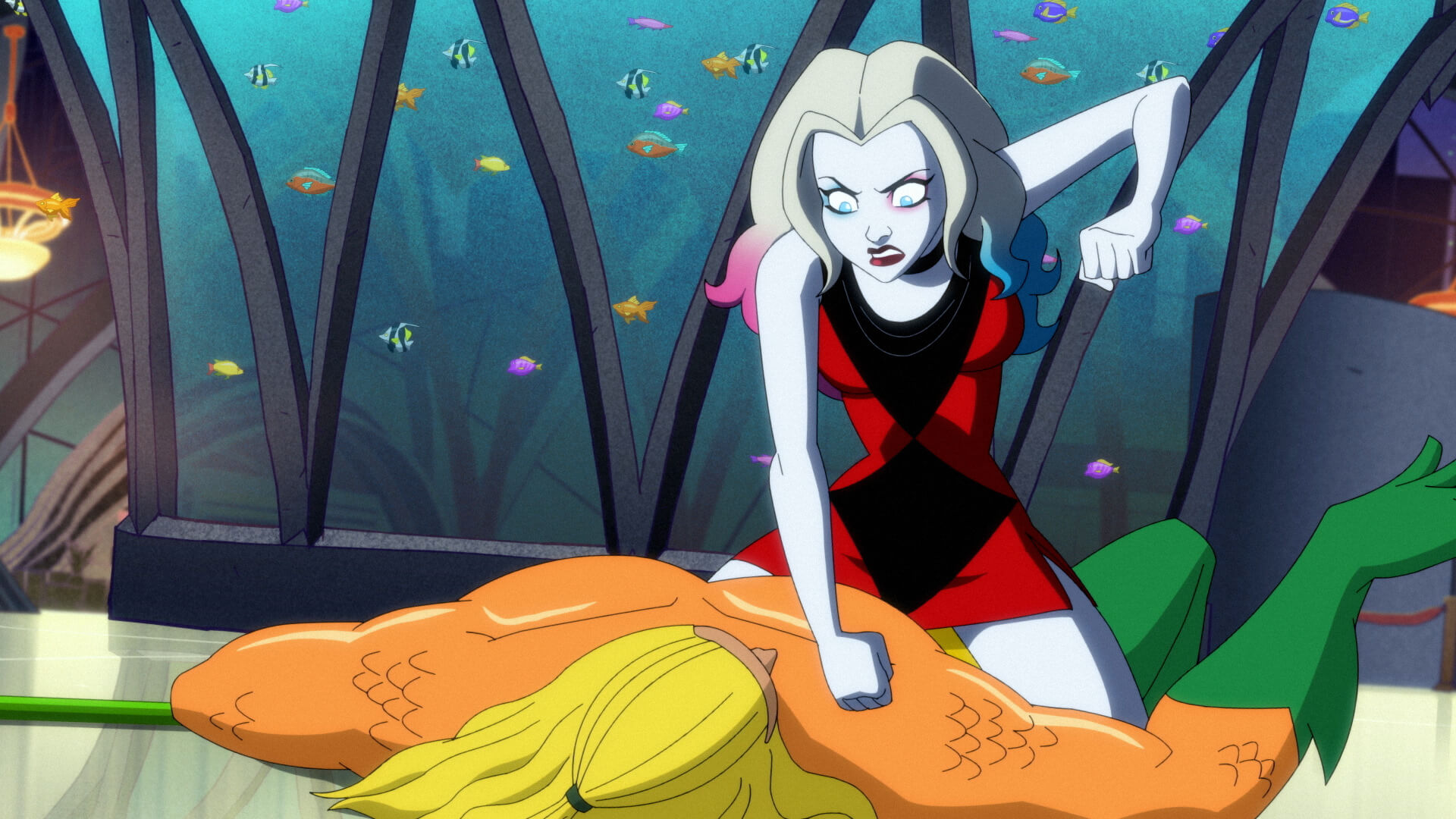 Once again this episode proved that it’s not safe to live in Gotham City, whether you’re a human or a fish. Sy Borgman’s flashback contained a body count of 15 people, but it’s likely that was just the tip of the iceberg. Murder runs in Sy’s family, and we have one confirmed kill from his mutated sister’s rampage at the end of the episode. Let’s be honest though, Mireille was probably just getting started. We don’t know how many of the fish Aquaman managed to save, but even if he got all of them to a body of water, it was too late to save the two that Bane stomped on. This gives the episode a kill count of 18, bringing our series total to 75 – and we still don’t know if King Shark ate the diver! 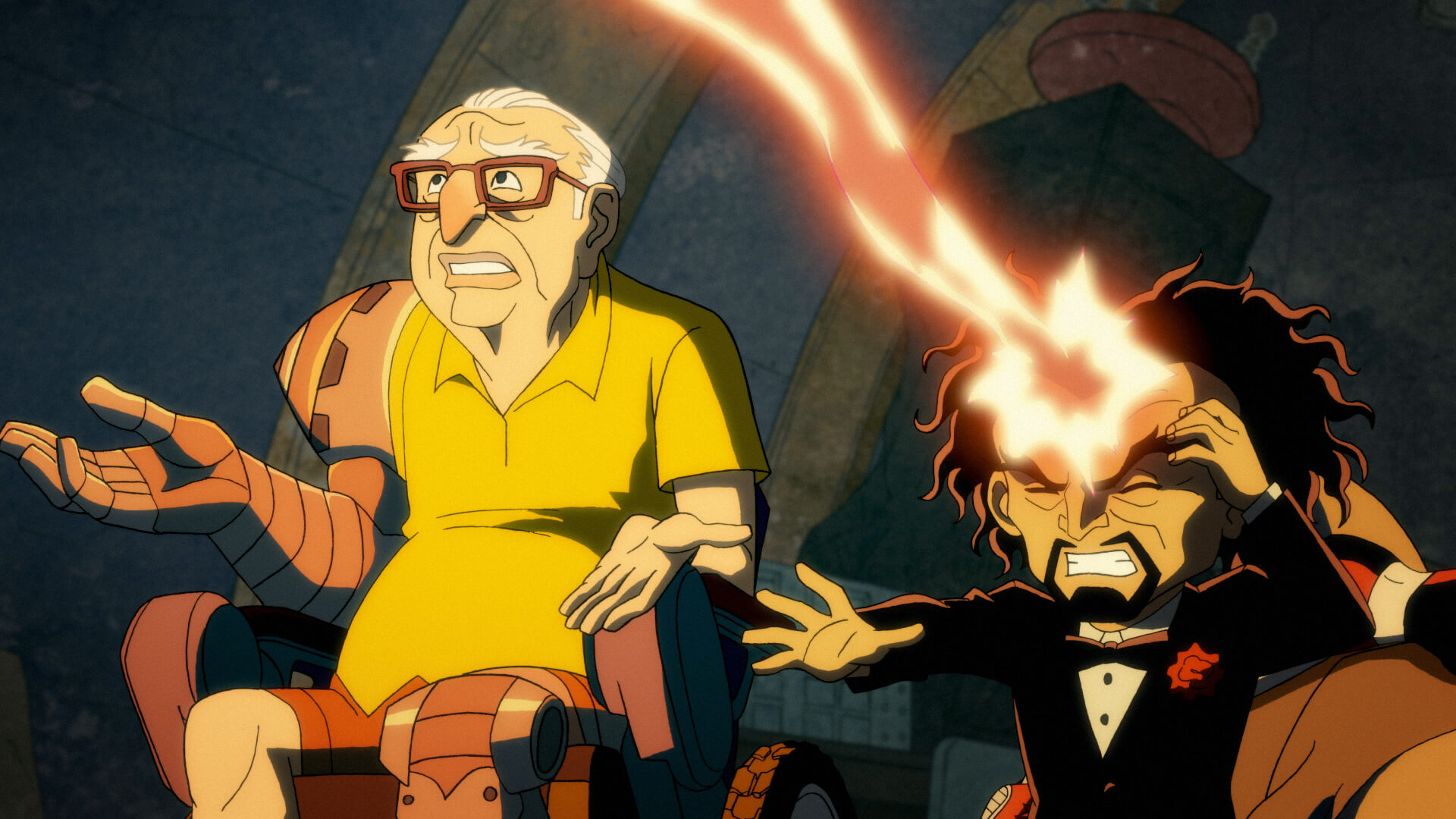 * While Harley and the gang were partying with the Legion, Dr. Psycho learned about Sy Borgman’s dark past. Sy’s background as a government “fixer” was first detailed in 2014’s Harley Quinn #4.

* After the aquarium shattered, the classic “Aquaman telepathy sound effect” could be heard as the fish were begging for anyone to save their lives. The sound effect became a pop culture staple after it’s inclusion in the 1967 Aquaman cartoon, and Super Friends. 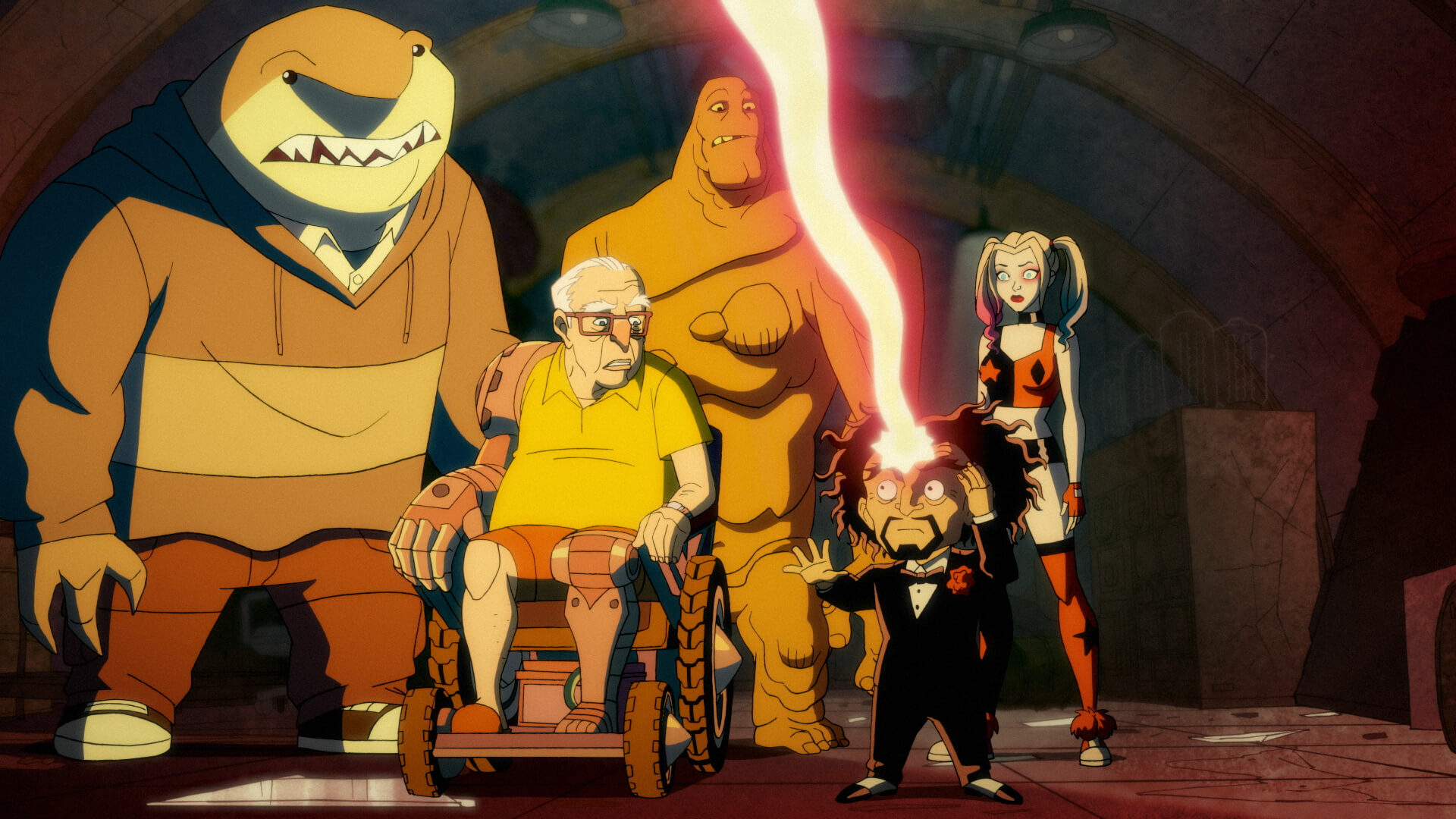 * Dr. Psycho sleeps in a race car bed. We just thought that was worth pointing out.

* Ivy’s loser college boyfriend was previously profiled in the first episode, and this week we learn he had a bad fish tank and took improv classes. Is it any wonder Ivy prefers plants?

* The Legion of Doom’s headquarters features a large painting of Maxie Zeus, which is giving us some weird flashbacks to his art from episode 3.

Now that Harley is in the Legion of Doom, she’ll have to work alongside her ex! Can Harley and Mistah J get along? Check out the next episode airing this Friday to find out!

Did this episode's Harley and Ivy feud break your heart? Let us know in our Community!