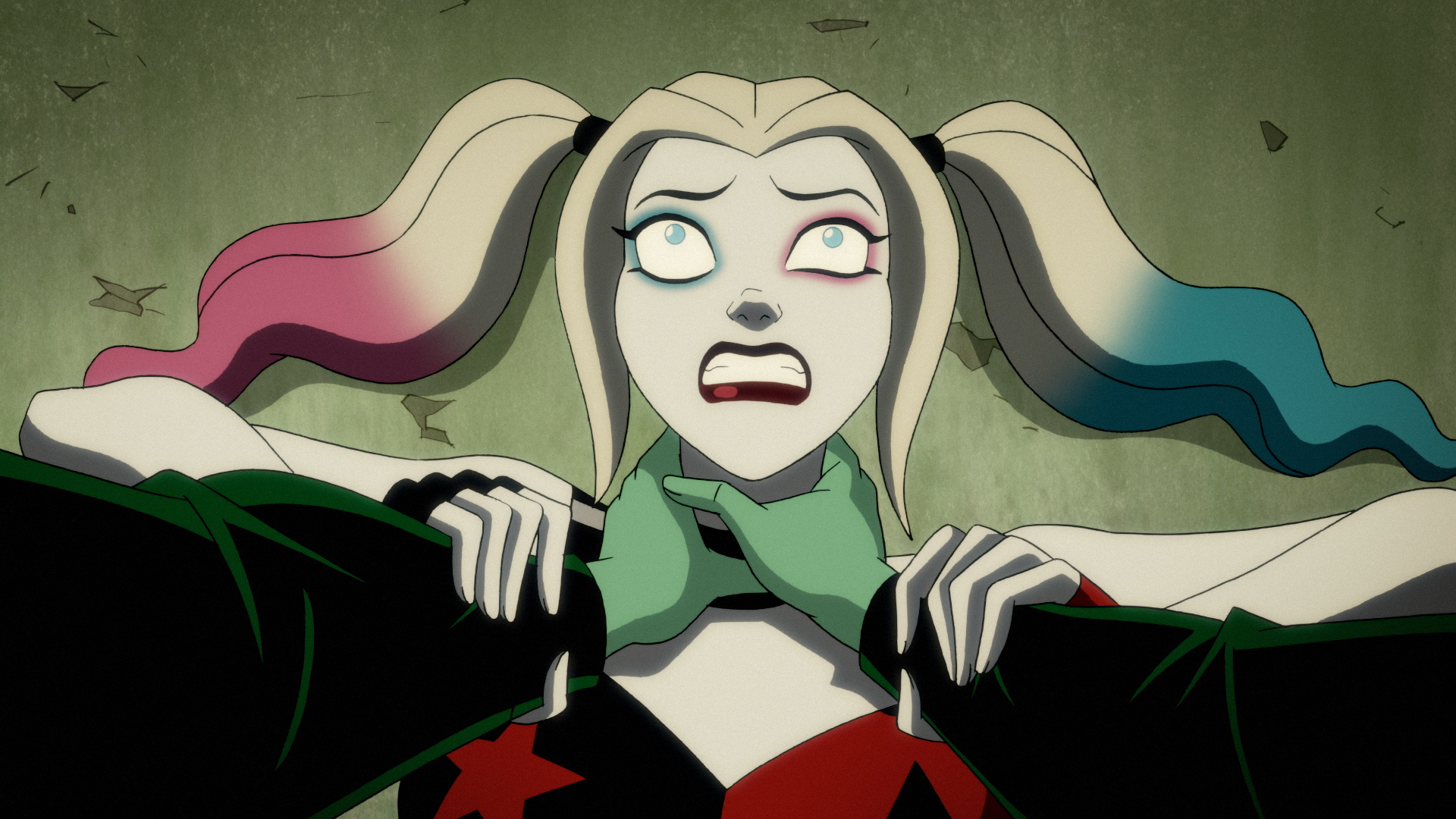 The Most F’d Up Moments in HARLEY QUINN Episode 2-12: “Lovers’ Quarrel” 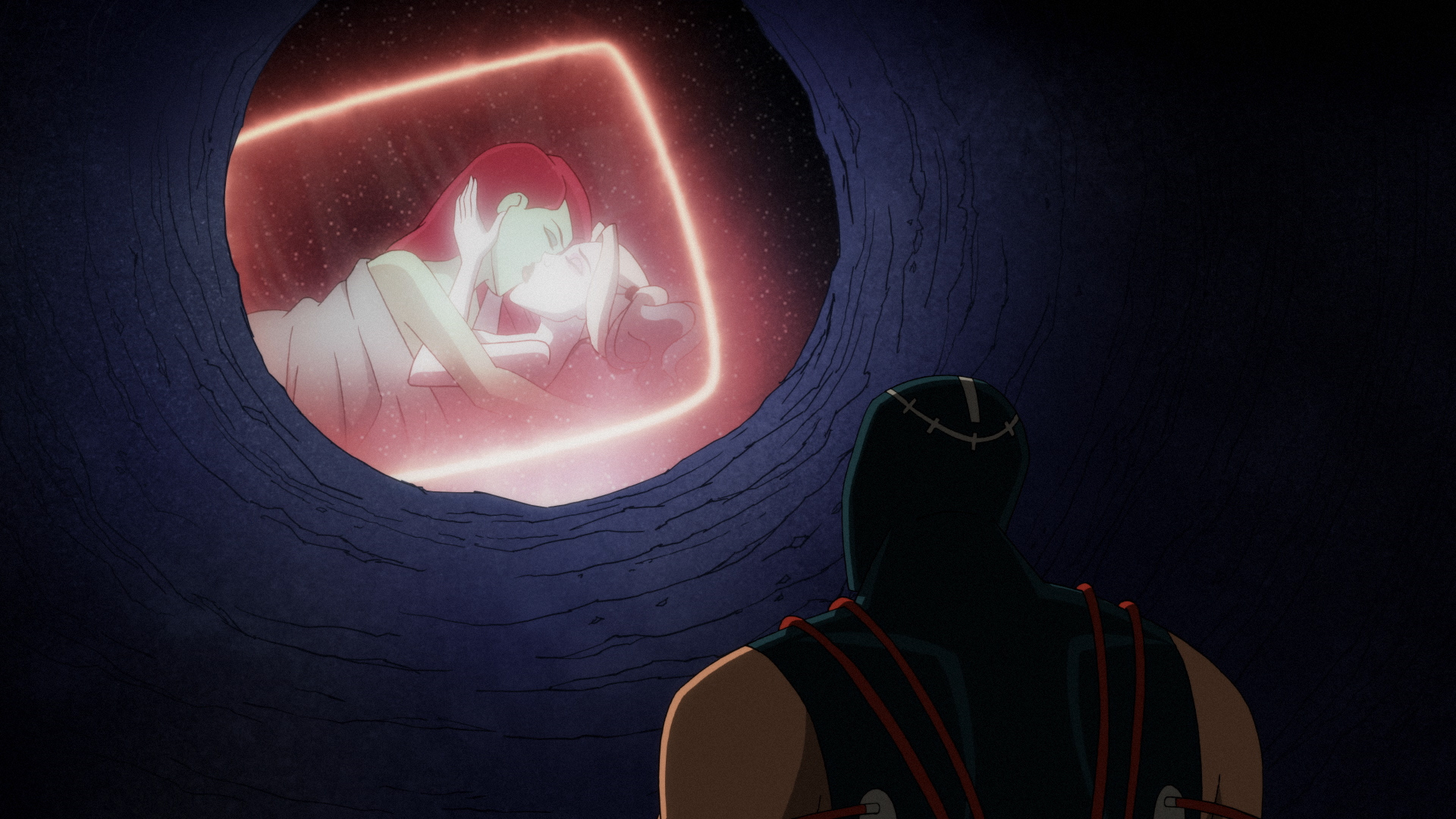 * Are we just going to ignore the fact that King Shark devoured his kid brother? We know that the latest developments in the Harley-Kite-Ivy triangle are riveting, but the crew CANNOT sweep this under the rug. As twisted as the brother-chowdown was, we were amused at Kid-King Shark’s braces. Sharks need orthodontists too!

* Superman, Batman, and Wonder Woman are the pillars of the DC Universe, so it was a bit jarring to see them go all Riverdale on each other. After Ivy zapped them with her love potion, the Trinity began to get ready for a different kind of crossover – one that’s probably more suited for DC’s Black Label. Don’t forget, Harley left so we don’t know just how far this went. The next JLA meeting is going to be totes awkward.

* The episode ended with Psycho pulling the mother of all d**k moves by broadcasting Harley and Ivy’s intimate moments in the sky. This is kind of like when a celebrity sex tape leaks online, except the celebrities are Harley and Ivy, and instead of leaking online, it’s in the sky for the entire city to see. Imagine how much this disrupted daily life. How many parents had to have uncomfortable talks with their children that night? Did a group of Karens collectively faint? 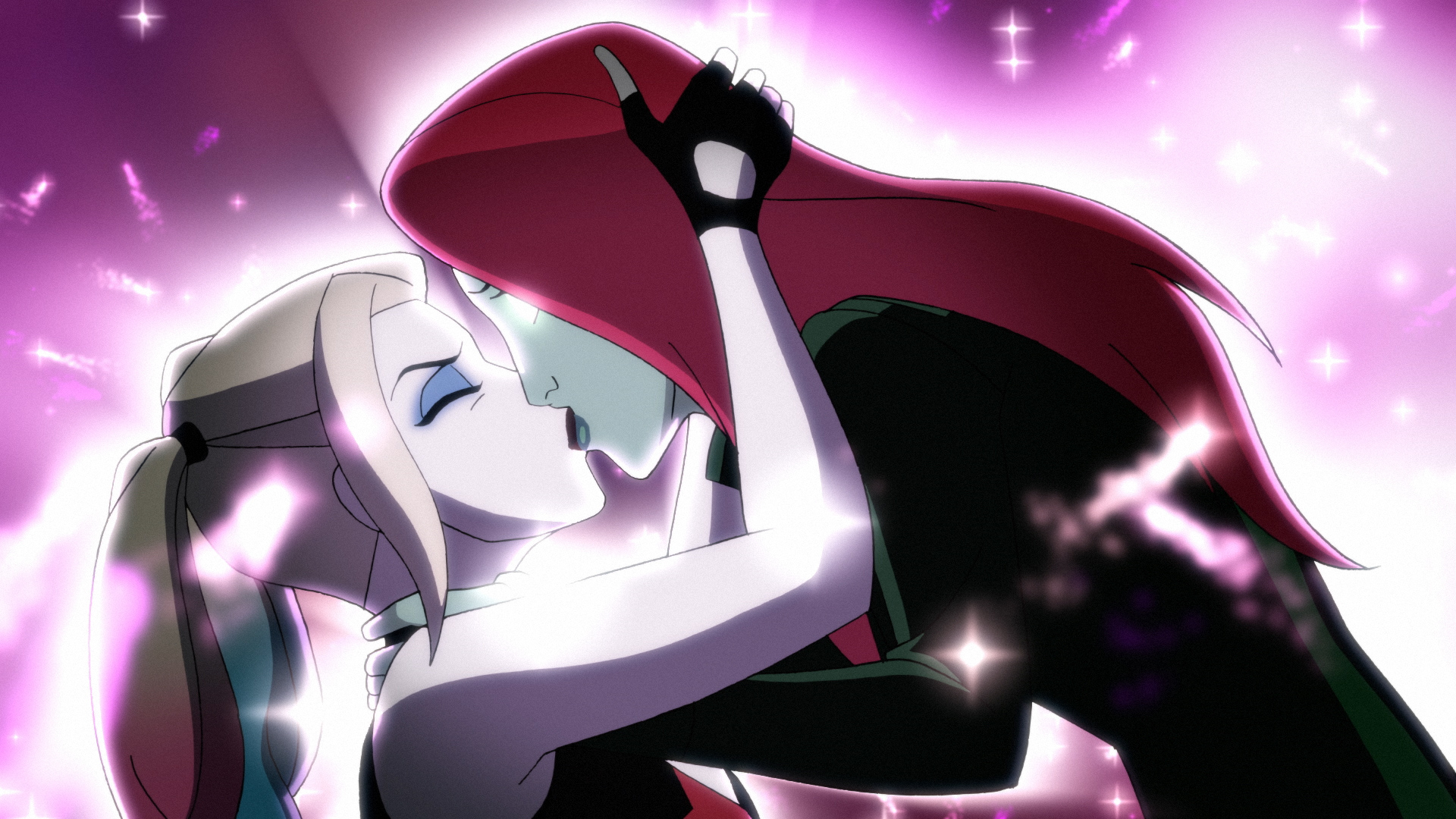 Because it warmed our shipper hearts, here’s Harley’s declaration of love to Ivy: “Ivy, you call me out on all my bullshit, but you don’t judge me for it. We have fun whether we’re sitting on the couch, or murdering a group of investment bankers. You showed me what the best version of myself could be and you held me to it. I’m in love with you. I want to be with you. And yeah, it might be messy, it might not work, it might even destroy our friendship forever, but love is a risk. I’d rather risk our friendship than pretend these feelings aren’t real. Because you don’t give up on love. Take a risk. Take a leap of faith and be with me.”

HARLEY, that was BEAUTIFUL! Take the leap Ivy, TAKE THE F**KING LEAP! 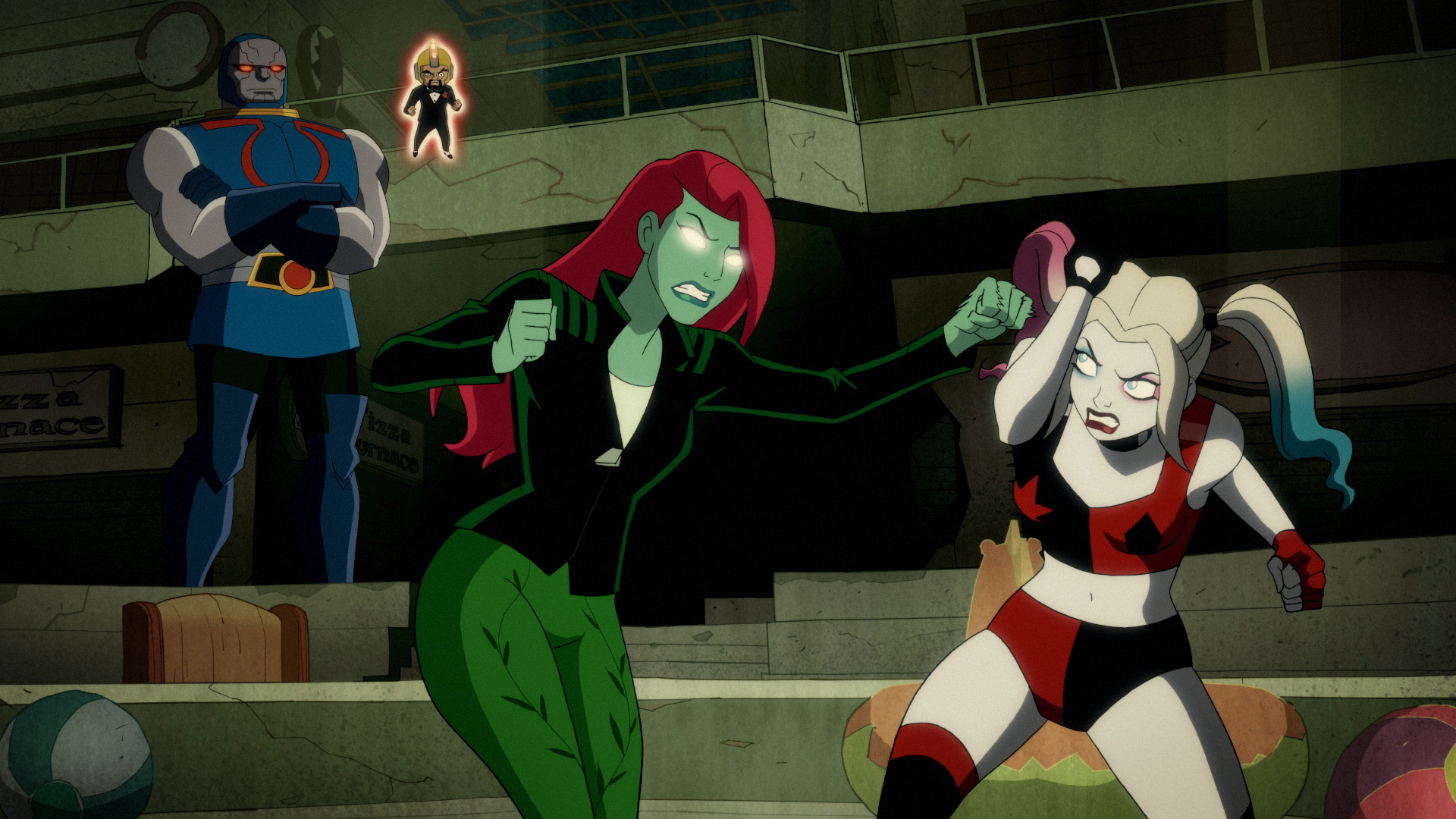 This episode contained 10 F-bombs, bringing our season total to 110.

That brings Harley’s season total to 35, Psycho to 31, and gives Riddler his first F-bomb of the season. Who will take the F-bomb crown next week for the season finale? 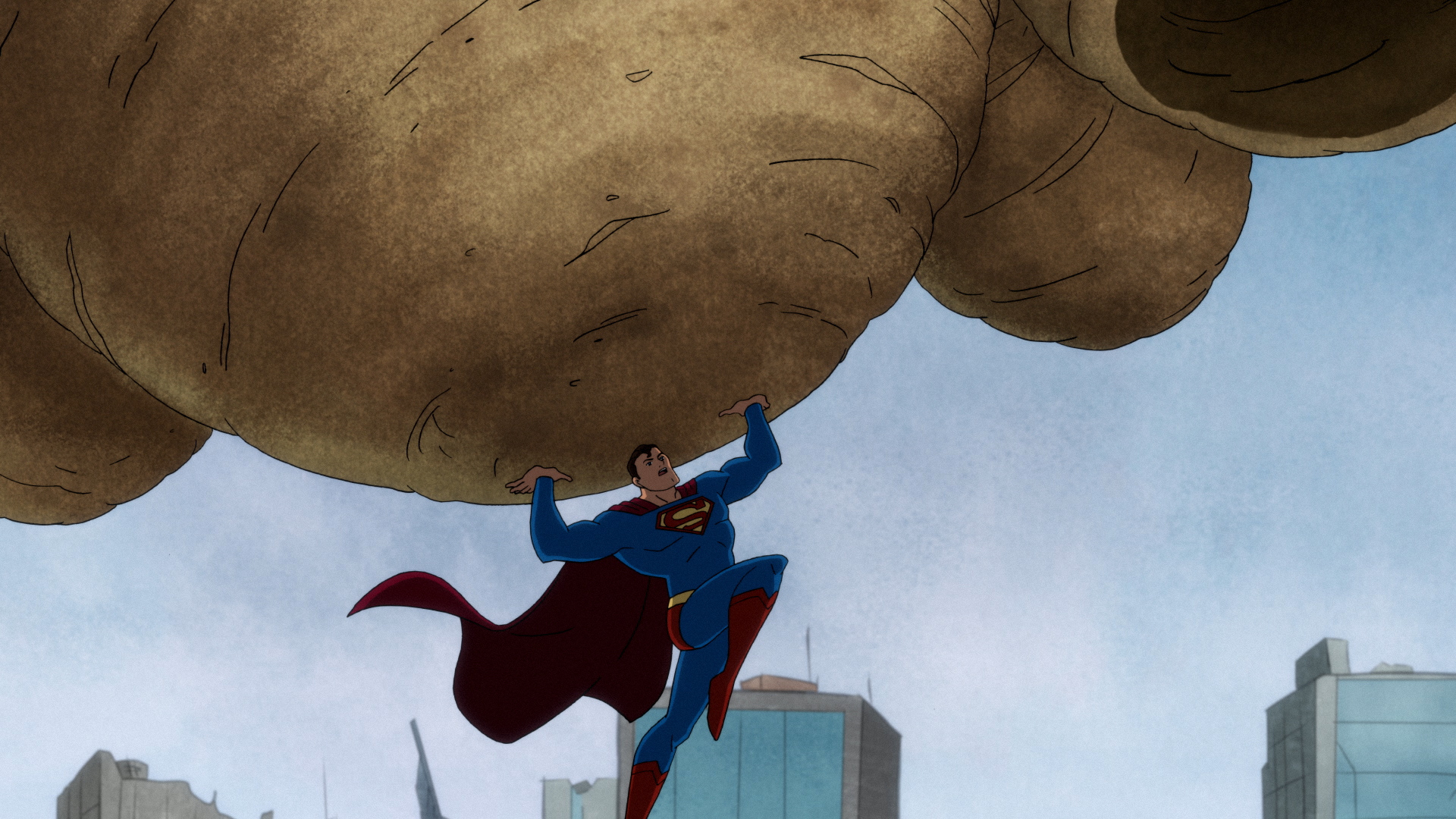 Everyone argues online when Batman and Superman’s cinematic counterparts kill someone, but when Superman throws a nest of Parademons to their doom, nobody bats a f**king eye. We have no way of knowing how many Parademons were killed, so we’re going to say 100 to be safe. King Shark also devoured his brother in a flashback, which brings the episode total to 101. That would bring the season total to 335.5, but since Sy Borgman isn’t as dead as we thought, we’re going to remove that pesky decimal, bringing the season 2 body count to 335.

So – WHAT THE HECK HAPPENS NOW!? Will Ivy return Harley’s love? What about Kite Man? The suspense is killing us! Tune in this Friday for the season 2 finale.

Holy f&*%ing s**t! What do you think is going to happen next?! Let us know in our Community!