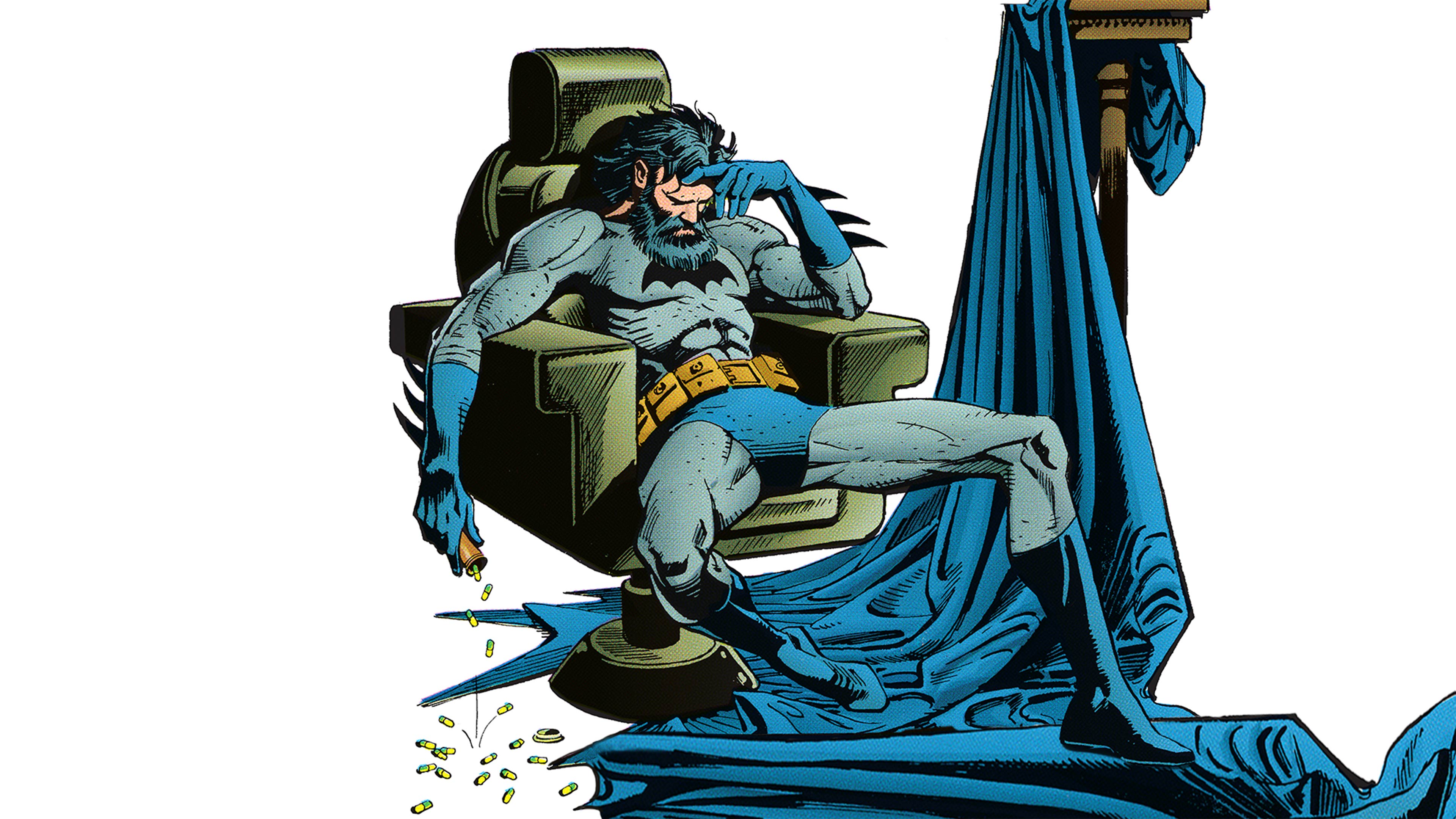 The More You Know: The 5 Best DC PSA Stories

If there’s one quality for which comic books are strangely underrated, it’s their level of influence. How often have you heard someone claim to have learned to read through comics? Many noted writers, filmmakers, and creators credit comics for inspiring their creative voice. So it's natural that most creators would like to impart a few important lessons between heroic brawls and cosmic battles. Enter the Public Service Announcement, or PSA. Most PSAs are regarded with nostalgic scorn and derision, recalled alongside cheesy attempts to make children aware of stranger danger, saying no to drugs, and child abuse.

While PSAs are often well-intentioned, the majority are characterized by a pallid sameness that fails to effect genuine consideration of the topic to young people. The following five stories are not that. Most of these stories personally involved their heroes – making their vulnerabilities, fears, and weaknesses more relatable. Here are the 5 best PSA stories that gave nuance and dimension to DC’s characters, and helped make fans all the more appreciative of their honesty. 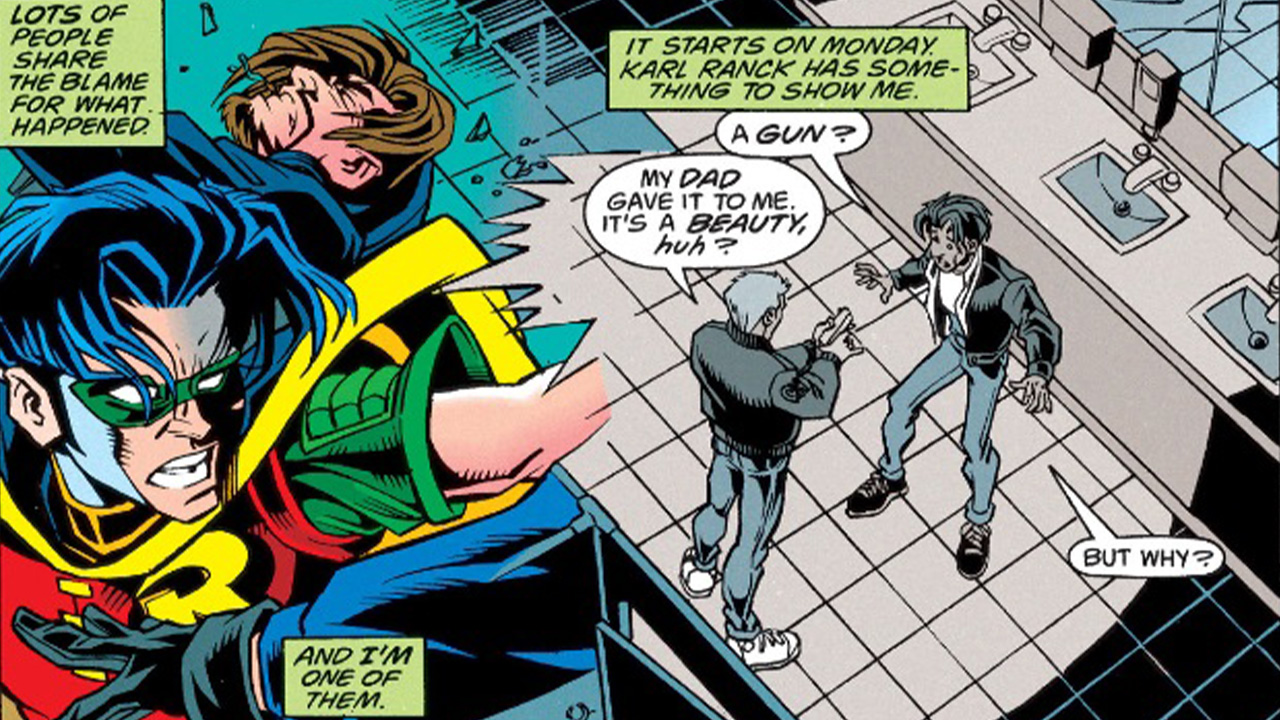 In the pages of Robin, Tim Drake struggled between protecting Gotham City as the Boy Wonder and living life as a regular 14-year-old boy attending Gotham Heights High School. In his orbit was a young jock named Karl Ranck, a muscle-headed jerk who always teased Tim for having geeky friends and not hanging with a cooler crowd. Karl often said Tim could be one of his crew if he acted more like him, and by issue #21, those suggestions grew more vague and suspicious. In Robin #24 and #25, Ranck shows Tim a gun his father gave him for protection against the influx of new students from the lower income neighborhoods in Gotham. Tim, at a loss on how to handle the situation, asks his father and step-mom for advice. Tim’s father speaks with Karl’s dad, who then takes back Karl’s gun. Karl, in turn, ends up stealing one of his dad’s guns and threatens Tim the next day at school for snitching. Tim goes straight to the principal. While Karl and his friends get into a fight with some of the new students who were also gang members. A fight breaks out, and the issue ends with Karl shot dead on the floor.

Writer Chuck Dixon always kept Tim leaning to the side of a real teenager, and having him go straight to his parents was a clear way of showing young readers how to confide in adults when faced with tough challenges such as gun violence. In Robin #26, Tim’s wracked with emotion and goes after Karl’s killers without alerting Batman. Batman arrives in time to save him and the Spoiler from a gangland execution; and though he chides his young partner for keeping him in the dark, he reminds him that Karl made the choice to wield the gun even if he didn’t comprehend the weight of that choice. 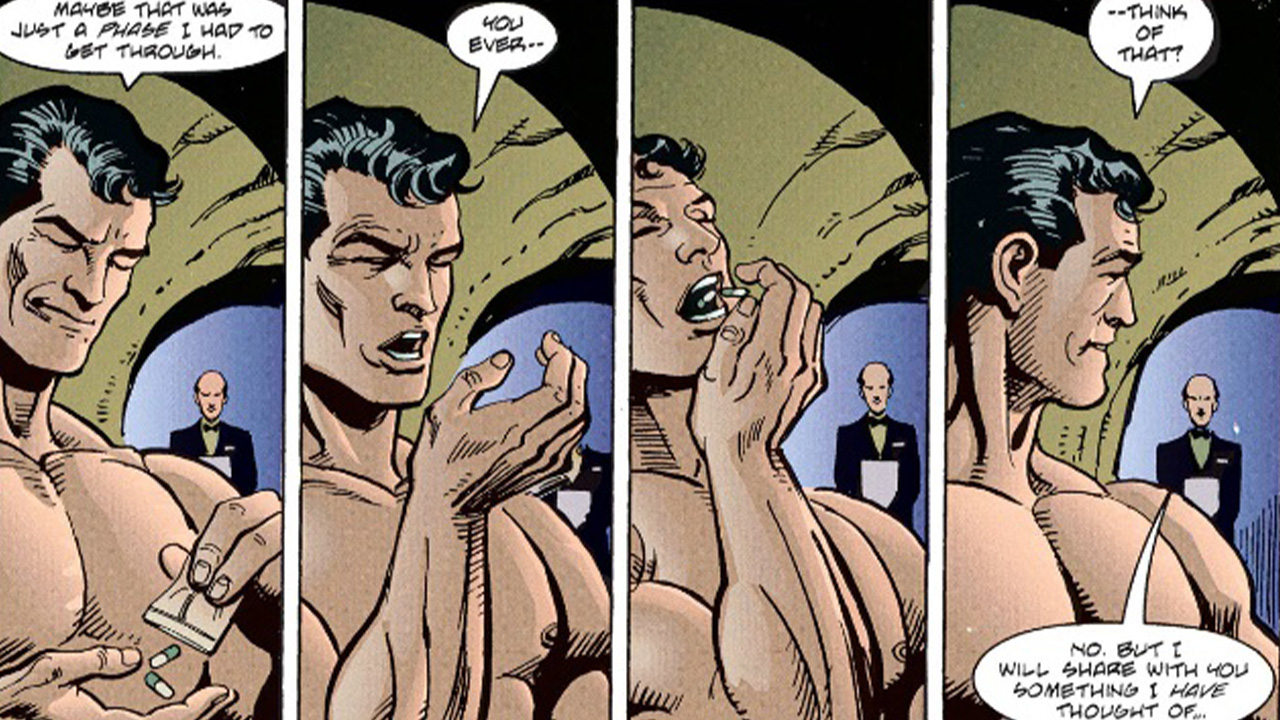 In the five-part storyline “Venom,” by writer Denny O’Neil, a flashback story set in Batman’s early career depicts a case in which he failed to save a girl from drowning. Bruce attributed this failure to his inability to lift a large boulder -- which stuck in his mind because the girl’s father was a scientist – Professor Randolph – who designed a prototype for the steroidal derivative that would later be known as Venom. The drug augmented one's strength’s ten-fold, and to Bruce’s eventual shame he took up the scientist’s offer to try it out. Soon he was strong enough to power-lift nearly 700lbs, hurl refrigerators through brick walls, and toss heavyweight men across rooms like pillows. But unbeknownst to Bruce, he was a dupe in a plot between Professor Randolph and a crazed military general bent on herding an army of super soldiers. While the drug granted super strength, it dulled the senses to the point of complete zombie-fication. Over the course of three months, Batman lost his deductive skills, his yearning for education, and his compassion. His loud outbursts and violent methods drove Alfred to abandon him, and Commissioner Gordon too found it difficult to work with him. Once Batman’s pill supply ran out, he demanded more from Randolph. He and the General promised more, but only if Batman killed Gordon for them. Batman seemingly accepted the contract, but at the last moment warned Gordon of the pair’s scheme and subsequently locked himself in the Batcave for a month in order to beat his addiction.

This was one of the most painful times in Bruce Wayne’s life. After going through withdrawal, he followed the mad scientist and general to South America, battled a shark, and escaped a steel trap in an ancient well where the only sure liberation was to take the pills again. Fighting temptation and his own physical weakness, Batman never relapsed and apprehended Randolph. But he remained haunted by what he had become. 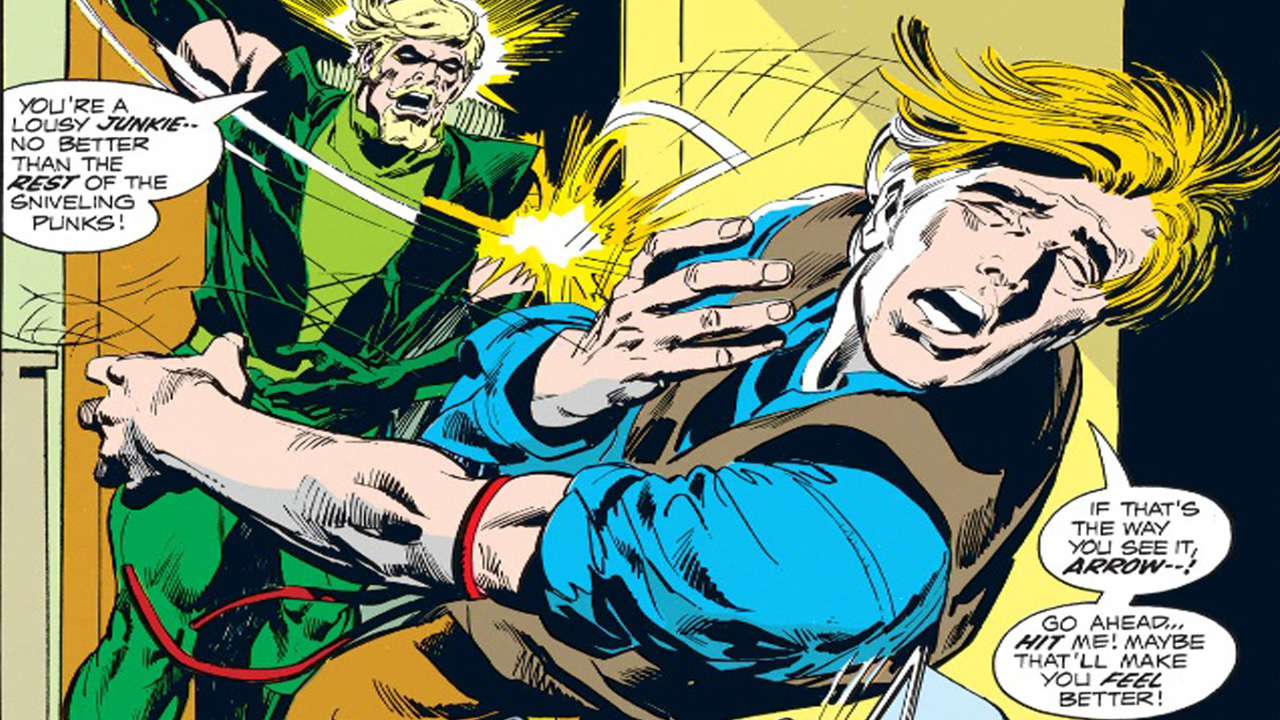 Inarguably one of DC’s most famous stories, “Snowbirds Don’t Fly!” and “They Say It’ll Kill Me…But They Don’t Say When!” is the two-part epic in Green Lantern/Green Arrow #85-86 by the writer/artist team of Dennis O’Neil and Neal Adams. It tells the tale of drug abuse, starting with a botched mugging of Green Arrow and introducing Green Lantern to the realities of users and pushers; and it ends with the addiction and rehabilitation of Green Arrow’s young partner Speedy. On the trail of a local drug gang who shot Oliver Queen with a crossbow (specifically, one of his arrows), Green Lantern and Green Arrow run into the hoodlums along with Roy Harper, a.k.a. Speedy. The two presume that Roy is already working the case, unthinking that the reason he’d been missing for over a month was due to his falling into heroin. After failing to stop a pack of dealers and experiencing the spell of uncut heroin themselves, the duo ask how anyone can get addicted to such terrible things as smack or cocaine. Roy tries to illuminate them, pouring his heart out about his emotional troubles, all owed to the fact that his mentor and guardian left him to travel the country with his friend and chase after Black Canary. It takes Oliver literally seeing Roy plunging a needle into his tied arm for him to realize Roy’s cautionary tale was about himself. 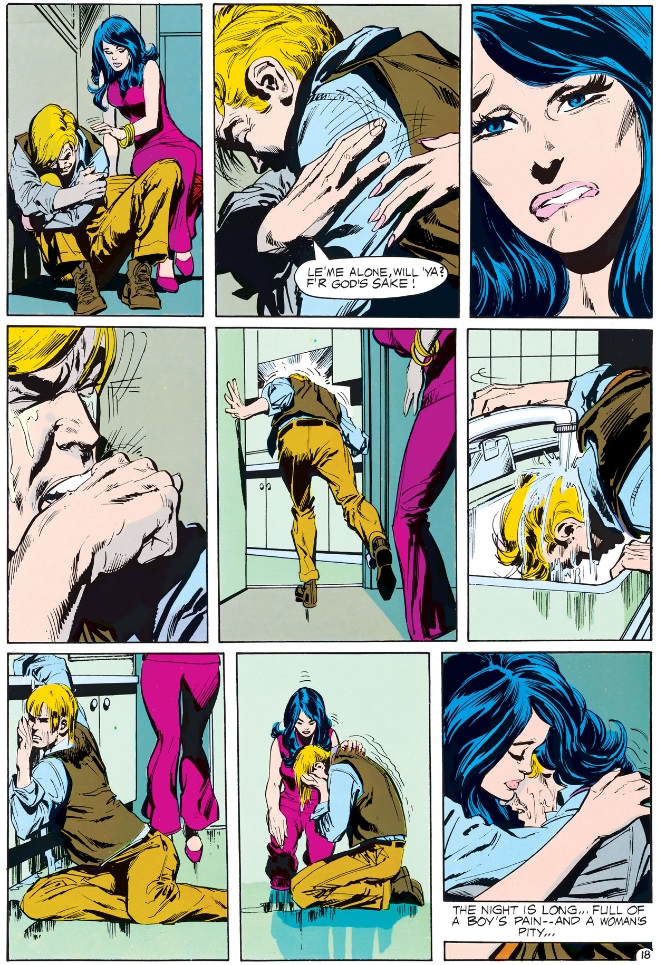 Most superhero tales would depict the central character coming to their troubled friend with empathy and understanding. In part 2, the story resumes with Oliver Queen backhanding his adopted son across the room and throwing him out on the street. Ollie briefly questions his role in Roy’s addiction before assuring himself that he did nothing wrong. Eventually Roy is found by Green Lantern, who flies him over to Dinah Lance’s residence to help him go through withdrawal. It’s a painful, brutal scene in which the superhero is at his lowest point. Dinah helps Roy get through the night, and some time later Roy recovers from his addiction. He thanks Ollie for inspiring him to fight through withdrawal by punching him back in the face, then leaves his partner, vowing to help kids across America fight drugs and get past their own personal demons that drove them towards substance abuse.

As shown in the gun violence two-parter, Tim Drake’s series often split focus between his crime fighting life and his life as a normal teenager in Gotham City. This often left his girlfriend Ariana Dzerchenko in the lurch, insecure about his feelings for her. In Robin #26 while attending Karl Ranck’s funeral, Tim spotted Stephanie Brown, a.k.a. the Spoiler. Worried that she would recognize him without his mask, Tim hurriedly tried to leave. Ariana took Tim’s anxiety as a sign that he knew Stephanie on a level he wouldn’t admit to. This led to her dying her hair in Robin #29, not so subtly matching Stephanie Brown’s golden locks. Finally in Robin #40, Ariana thought to take things a step further and invited Tim over her house while her aunt and uncle were attending church. She approaches Tim in a negligée, leaving the Boy Wonder at a complete loss for words. Tim refuses, confessing he’d love to get more physical with her but knew that he wasn’t ready to go that far. Ariana, confused and ashamed, cries and tells Tim of all the unwanted attention she’s gotten from other boys since dying her hair. Tim assures her that he loves her but sex is a doorway he wants to go through with her once they’re both ready. Just as they kiss, her aunt and uncle return home, and Tim has to use his Robin training to dodge her furious Uncle Vari from beating him to a pulp.

Unlike the ladies men in Batman and Nightwing that he surrounds himself with, Tim usually kept his feet on the ground and really only had two major love interests: Ariana and the Spoiler. The latter outlasted the former, and time will tell where their relationship will go as they grow older.

In the pages of Nightwing, Dick Grayson joined the Bludhaven police force in order to route out the corrupt officers in the city, as well as double-up the good he could accomplish on both sides of the law. The move irked Batman, who was aware Dick’s new job would require him to use a firearm, but Dick eventually earned his tolerance. After the deaths of certain former lawmen such as Chief Redhorn and the corrupt cop-turned-supervillain Dudley Soames a.k.a. Torque, Dick figured the troubles at the BHPD were over. Unfortunately, some problems take longer to solve over time than others. When assigned with a new partner, Gannon Malloy, Dick is witness to gay-bashing from their fellow officers. Malloy is beaten up before his shifts, and though Dick deduces this straight away, Gannon refuses help for fear that it’ll just make things worse. In Nightwing #78, Dick is in the locker room when more cops start hassling Gannon. When Dick defends his partner, one of the assailants mockingly asks if Dick is Gannon’s boyfriend. To which Dick responds, “What if I am?”

This showing of solidarity was a fresh angle in depicting queer relations in superhero comics. Dick isn’t distancing himself from his partner, he’s throwing himself into his friend’s orbit, inviting the idea of him being involved romantically and normalizing it for the readers. Writer Devin Grayson keeps Gannon’s independence by rejecting what he calls Dick’s “moment of P.C. bravado.” Nevertheless, even for the early 2000s, it was rare to see superhero comics involve themselves in the queer community, and even rarer for the heteronormativity of the central hero to be questioned by the hero for the sake of saving a friend.

What's your favorite DC story with a message? Let us know in our Community!