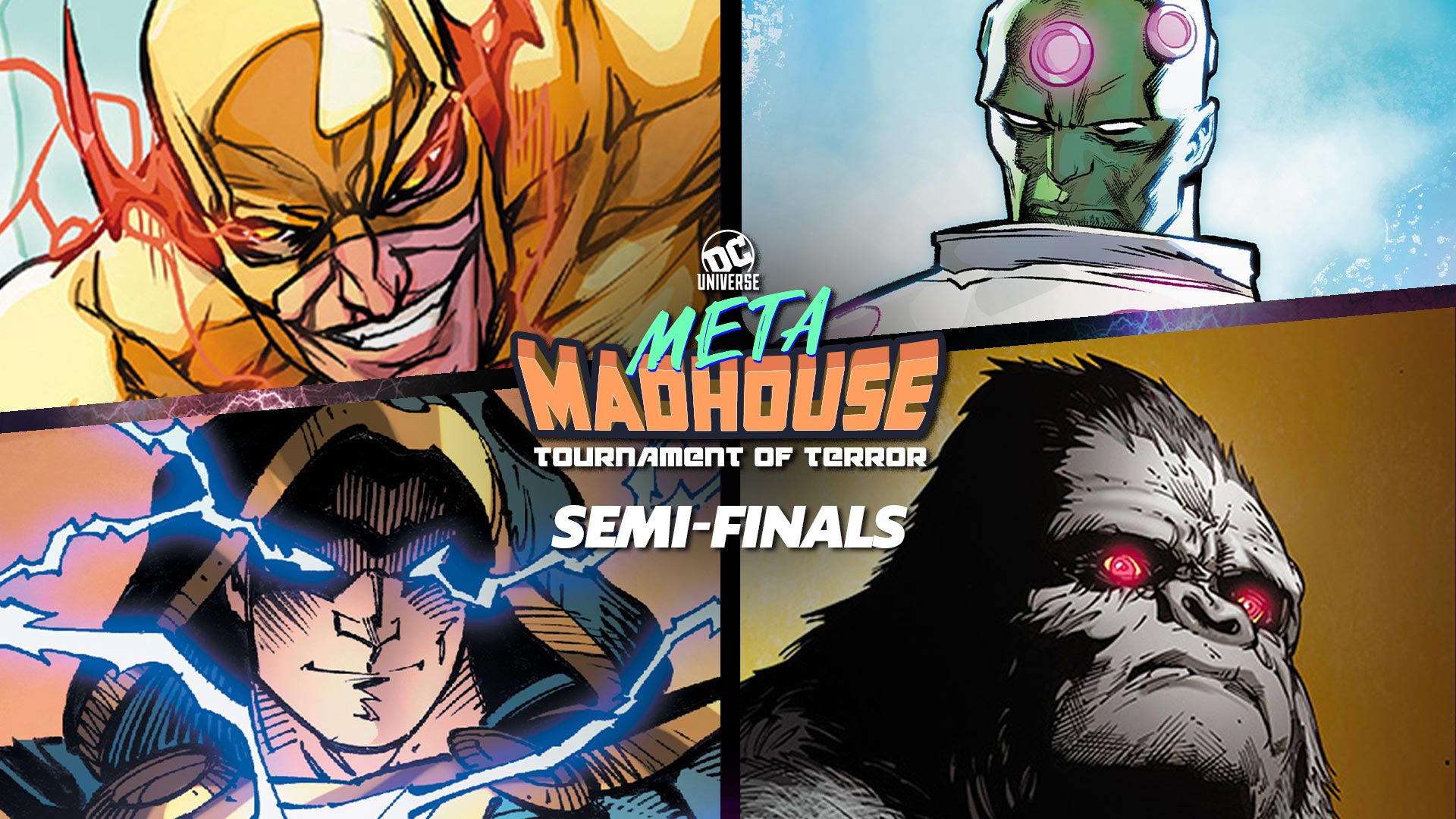 The TRUE Tournament of Terror begins today! Welcome, semi-finally, to our analysis of the semi-finals for this year’s entire Meta Madhouse competition! All four of our brackets have battled week after week to determine who would represent their team for this auspicious showdown. 64 entered, but only the four toughest, sharpest, and luckiest villains in the DC Universe remain. For the second to last time, YOU will be the ones who determine which of these fighters wins in their respective hypothetical matches by voting on your measured and considered opinion. As always, I remain the stalwart Alex Jaffe- trivia master, investigative columnist, and “who would win in a fight” expert- to help you with that measure and consideration in my own professional opinion. Speedster, sorcerer, alien and ape -- which will take the crown for next year? Before you cast your penultimate votes, read on, and we’ll try to begin answering that very question together.

ROUND ONE: REVERSE-FLASH VS. BLACK ADAM

It’s hard to imagine anything more formidable in the DC Universe than a speedster who knows exactly what he’s doing. Faster than light, or thought, or even time, any strategy for countering Thawne’s power requires speed equal to his own, or perhaps the ability to slow or stop time. Black Adam channels the swiftness of a god, and even has access to instant teleportation between his present location and the Rock of Eternity. But as Superman can attest, the guy who only has one power can often use it better and more effectively than the metahuman with a wide array of them. In terms of pure speed, Reverse-Flash has Black Adam licked.

It’s notable that of all the contestants to have been awarded the Lazarus Pit Save, only Black Adam- in his strategic victory against the Anti-Monitor- has made it this far. Shazam’s champion of bygone millennia has exhibited a power and cunning capable of overcoming universe destroyers, interdimensional demon lords, and even the god of war. Reverse-Flash can get his flurry of punches in, but can they even register against Black Adam’s magic-imbued defenses?

Maybe not. But then again, they may not have to. The key to Black Adam’s strategy so far has been on his reliance on the wisdom of Zehuti- a clairvoyance which allows him to peer through time and space to all the insight he needs to claim victory. But where Black Adam merely sees time… Reverse-Flash can change it entirely. The only reason Eobard Thawne hasn’t used his powers to wipe out The Flash is because it would indirectly lead to him losing his own powers. But against Black Adam? There are no such temporal hindrances. Thawne’s victory relies on traveling 5,000 years back in time, before the man once known as Teth Adam ever crossed paths with a duty-burdened wizard -- and simply ensuring the meeting never happens.

Interestingly, should Reverse-Flash take such a tactic, it would mean he’d probably return to a reality where he’s facing the Anti-Monitor- a squash match in the world killer’s favor. But each failed attempt to correct history in his favor just means more dickering until he finally gets it right.

My final word here: Black Adam may be one of the most powerful metahumans on Earth, but he can’t counter time travel. Then again, this isn’t the first impossible enemy he’s faced in this tournament; he’s not even the second. One thing we’ve clearly learned is to never count out the man in black.

ROUND TWO: BRAINIAC VS. GORILLA GRODD

First, I should point out that we have a potential Flash villain vs. Flash villain finale here on our hands… but with Brainiac standing opposite the arena from the scourge of Gorilla City, that outcome currently seems rather unlikely. In the Luthor Masterminds bracket, Brainiac’s first victory in the Round of 16 was against Maxwell Lord. Lord is a telepath whose abilities have altered the minds of Earth’s mightiest heroes, and during Brightest Day, the entire planet. In terms of sheer brain power, Lord’s abilities work magnitudes above Grodd’s own. And yet, those powers hardly even registered against Brainiac -- a being with telepathic abilities himself, but with an alien and cybernetic physiology which keeps mere Earthborn mind controllers from finding purchase within his own bionic mind, be they man or ape.

All the evidence you need for how this one goes down is in the video game Injustice 2, where Grodd works as Brainiac’s own emissary on Earth for an impending invasion. And while Grodd was clearly planning to usurp Brainiac’s seat of power when the time was right- you know, as all villains do when alliances are formed- neither the time nor opportunity ever arose when Grodd could reasonably challenge his benefactor and expect victory. This fight has already been waged in Grodd’s mind, and Grodd himself has determined Brainiac the victor. And you can expect that Superman’s positronic nemesis has already made that same analysis, down to the thousandth fraction of a percent. Besides: Brainiac fights as an equal to Superman, and Superman’s taken on bigger apes than Grodd before.

Which villains will make it to the Meta Madhouse Finals? Cast your vote now and talk about it in our Community!