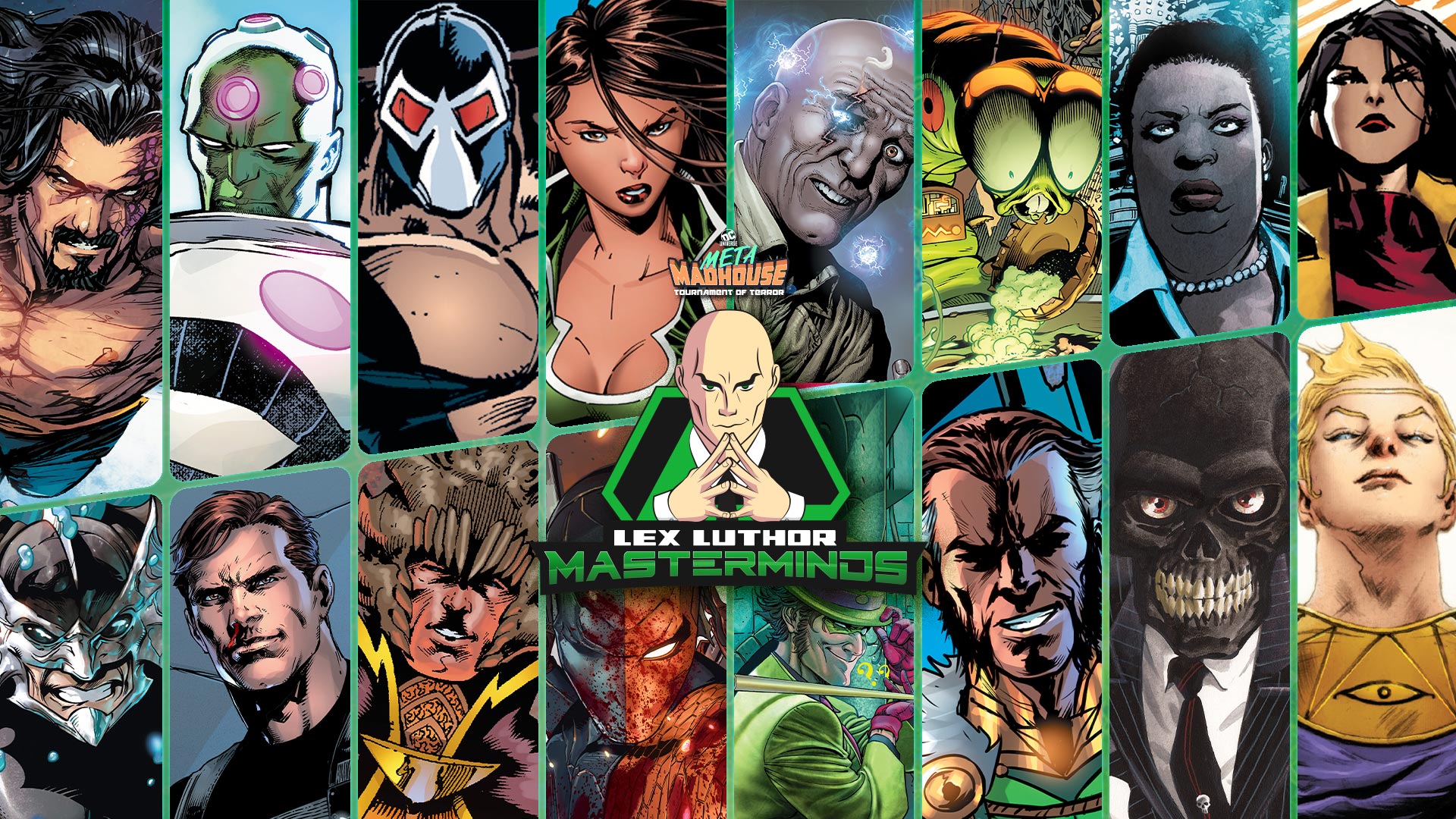 Meta Madhouse: Our Odds on Which Devious Mastermind Will Triumph in Round One!

First, Reverse-Flash tore through Gotham to represent the Joker Maniacs. Then, Black Adam brought the most powerful beings in the DC Universe to heel in his calculated campaign to rule the Darkseid Invaders. Now, the Meta Madhouse mayhem proceeds to Metropolis! Today’s we introduce you to the team chosen by the city’s favorite son (at least, before that blue boy scout showed up), The Luthor Masterminds: a collection of the most brilliant minds and devious schemers the DC Universe has ever known. These men and women are always thinking fifty-two steps ahead to victory, and never leave a potential angle unlooked over.

But while that may translate well to Luthor’s own private brain trust for world domination, how will this collection of evil nerds adapt to the battlefield? Only YOU can decide, as each of the Luthor Masterminds faces off in pitched combat to determine who will represent LexCorp in the Final Four! How, you ask? Why, through the arcane magic of democracy! I’m Alex Jaffe- trivia master, investigative columnist, and “who would win in a fight” expert- and I’m here to give you my professional breakdown on each of the matches slated for today’s super science heavy slugfest. But while I can bloviate all I want- and trust me, I will- it’s your votes which will ultimately determine the victor of each battle. Votes which, I must dutifully remind you, should reflect who would win in a fight, and not which character you've written more fan fiction for or whatever. If you want to learn more about these characters, check out the special Lex Luthor Masterminds collection before casting your all-important votes!

(IMPORTANT NOTE: One of these characters has secretly been awarded a “Lazarus Pit Save” by a DC creative professional, allowing them to advance one time if the votes come out against them. Because of this, every fighter currently in play has a minimum 6.25% chance of victory.)

ROUND ONE: VANDAL SAVAGE VS. OCEAN MASTER

Vandal Savage is the man who invented the long game. Over fifty thousand years old, this founder of mighty civilizations and secret societies has had his hands in every pot humanity has ever crafted. He is a brilliant tactician, superhuman in strength and stamina, virtually unmatched in martial experience, and damn hard to kill. His opponent, Ocean Master, is the brother of Aquaman. A powerful hero in his own right, and one who Ocean Master can typically keep up with in land or sea.

Though most of Orm’s powers are maritime specific, he does have some skill with Atlantean magic at his disposal that might turn the tides in his favor… but if the rumors are true, Vandal Savage himself has been said to be responsible for defeating the original mages of Atlantis and sinking their city in the first place. If there’s one thing Vandal knows, it’s that history repeats itself. What is Vandal Savage but living history?

ROUND TWO: MAXWELL LORD VS. BRAINIAC

Despite his major “used car salesman” huckster vibes, Maxwell Lord is one of the most capable shysters and ambitious villains in DCU history. Prior to Infinite Crisis, Lord spent years cultivating a reputation as a friend of the Super Hero community before sticking his knife in their backs with his OMAC project. In a fight, however, Lord’s greatest asset is his ability to influence minds through telekinesis, to which even Superman has proven vulnerable.

Brainiac, however, may be an enemy who frequently fights Superman on even footing, but he is not Superman. A combination of artificial and biological intelligence, it’s not hard to imagine that Lord’s telekinetic abilities may not have an effect on this cybernetic Coluan. It wouldn’t be the first time Lord was bested by an artificial intelligence: much of his early work in subterfuge was influenced by the artificial Kilg%re. Brainiac himself has demonstrated the ability to dominate minds. With an experience in conquest which has earned him victory on countless worlds, Brainiac is a prime candidate to withstand Lord’s mental assault. And without that card to play, Maxwell Lord is just another super spy, up against a super strong, super intelligent, super powerful collector of worlds.

ROUND THREE: BANE VS. BROTHER BLOOD

Look, let’s come right out and say it: Brother Blood is a chump. He’s got his following, and sometimes claims some vague connection to The Red. He had that vampirism thing going for a little bit. There’s some magic to him, sure, but it’s more on the preparation-heavy ritual side than the combat ready snap-your-fingers type. At the end of the day, Brother Blood really ain’t much more than a charismatic cult leader in a fun hat. Bane, on the other hand, was smart enough to stay out of the Joker Maniacs bracket so he wouldn’t have to fight Mr. Nobody or Reverse-Flash, and dunk on the nerd table here instead. Unless he’s prepared one heck of a spell beforehand, there’s nothing Brother Blood can do or say that’s going to keep Bane from breaking his back. Maybe some kind of blood control thing? But he rarely demonstrates that kind of foresight. And who are we kidding, Bane’s blood is mostly Venom by this point, anyway.

Talia al Ghul is no joke. As the daughter of Ra’s al Ghul, Talia was trained in combat to the highest standard that the League of Assassins has to offer. A master spy, a master manipulator, and a woman who will do absolutely anything to get what she wants, Talia is not somebody most people would want to mess with.

Deathstroke the Terminator, though, is something different. When Talia gets mortally wounded, she’s rushed to a Lazarus Pit and the fight is over. When Deathstroke is mortally wounded, he heals up right on the spot and the fight goes on. He’s got your typical super soldier strength and reflexes, and downright dirty is the only way he fights. He once took on a whole incarnation of the Justice League by himself in Identity Crisis- and not even one of the lame ones. Talia is a formidable opponent, and the two do have something of a history together, which may be a distraction for him… but the odds are more or less completely in Slade Wilson’s favor.

ROUND FIVE: DR. SIVANA VS. THE RIDDLER

I’ll be honest. I’m pretty sure that my dad could beat both these guys up. So could most people capable of doing one (1) pull-up, probably. Don’t let the Mark Strong performance fool you: Dr. Sivana is a decrepit old man who relies on ridiculous gadgets to antagonize a small child. The Riddler is an obsessive-compulsive geek who taunts his enemies in video messages and leaves the fighting to his goons. This is going to be kind of depressing, if not for the fact that Sivana probably brought some kind of experimental ray gun that turns his enemies into squirrels or something. So Sivana’s super-science tinkering background gives him the clear edge, but this could easily just turn out to be a pathetic slap fight. In which case, well, the non-arthritic fighter wins.

In his transcendent, fully incubated form, the Venusian monster who Shazam knows as Mister Mind is a nearly omnipotent devourer of time and space. But who has that kind of time? The Mister Mind present on the battlefield today is the more typical two inch worm he generally presents himself as, capable of quickly spinning durable silk webs, powerful mind control, and... pretty much just those two things. But as one of the most powerful telepaths in the DC Universe, that’s really all you need to command the Monster Society of Evil.

Mr. Mind’s opponent happens to be the leader of a society himself: the League of Assassins. Ra’s al Ghul is a fighter on the level of Batman himself, but most of his opponents tend to be human size. Mr. Mind’s surprising quickness compounded by the size of a target he might prove to Ra’s al Ghul’s signature blade may put this ancient mastermind at an awkward disadvantage. The real question is whether Ra’s has the will to resist Mr. Mind’s mental control. My gut says he does -- as the leader of an organization which practices complete control of the mind and body, Ra’s must be prepared to defend himself from mental invasion. But we don’t have much material to support that idea, so that’s pure speculation. The question here is where will Mr. Mind ultimately end up: in Ra’s al Ghul’s brain, or under his boot?

Mask knows how to put the hurt on people, to be sure, but those people are typically clamped in irons so he can do the torturing. And while Amanda Waller may not primarily be a fighter, she’s no slouch either. The New 52 deployed Waller in both the past and present as a capable field agent who kept up with the likes of Deathstroke and Black Canary. And in the original Suicide Squad series, Waller even managed to knock Granny Goodness flat on her butt. It’s Waller’s sheer determination that drives her to do the impossible both on and off the field. Black Mask is afraid of Batman, but Batman is afraid of Amanda Waller. When all this is over, Roman Sionis just might end up with a chip in his head and calling her “Boss.”

ROUND EIGHT: LADY SHIVA VS. OZYMANDIAS

Some people argue that Lady Shiva is among the deadliest martial artists on Earth. Those people are incorrect: she IS the deadliest martial artist on Earth. Terror of Ra’s al Ghul, defeater of Batman, and constant seeker of greater challenges, I can safely say that nobody’s been looking forward to competing in the Meta Madhouse tournament more than Shiva.

Like Shiva, Watchmen’s Ozymandias is the greatest fighter of his world, as well. Any move you can think to use against him, he already thought of how to counter it 35 minutes ago. But Ozymandias’s world is one which, a certain naked blue solipsist notwithstanding, is much more grounded than the DC Universe. The world of Ozymandias has no Batman, no League of Assassins. It’s true that Shiva and Ozymandias are the greatest fighters of their respective worlds, and this is going to be an incredible match to behold. But Shiva’s world operates on a much higher metric of martial artistry than Adrian Veidt’s. When it comes to one-on-one combat, Shiva’s talent borders on superhuman. And that’s one thing Ozymandias can never be. Look upon her fists, ye mighty, and despair.

Which Mastermind has the sinister smarts to go all the way? Vote now and talk about it in our Community!