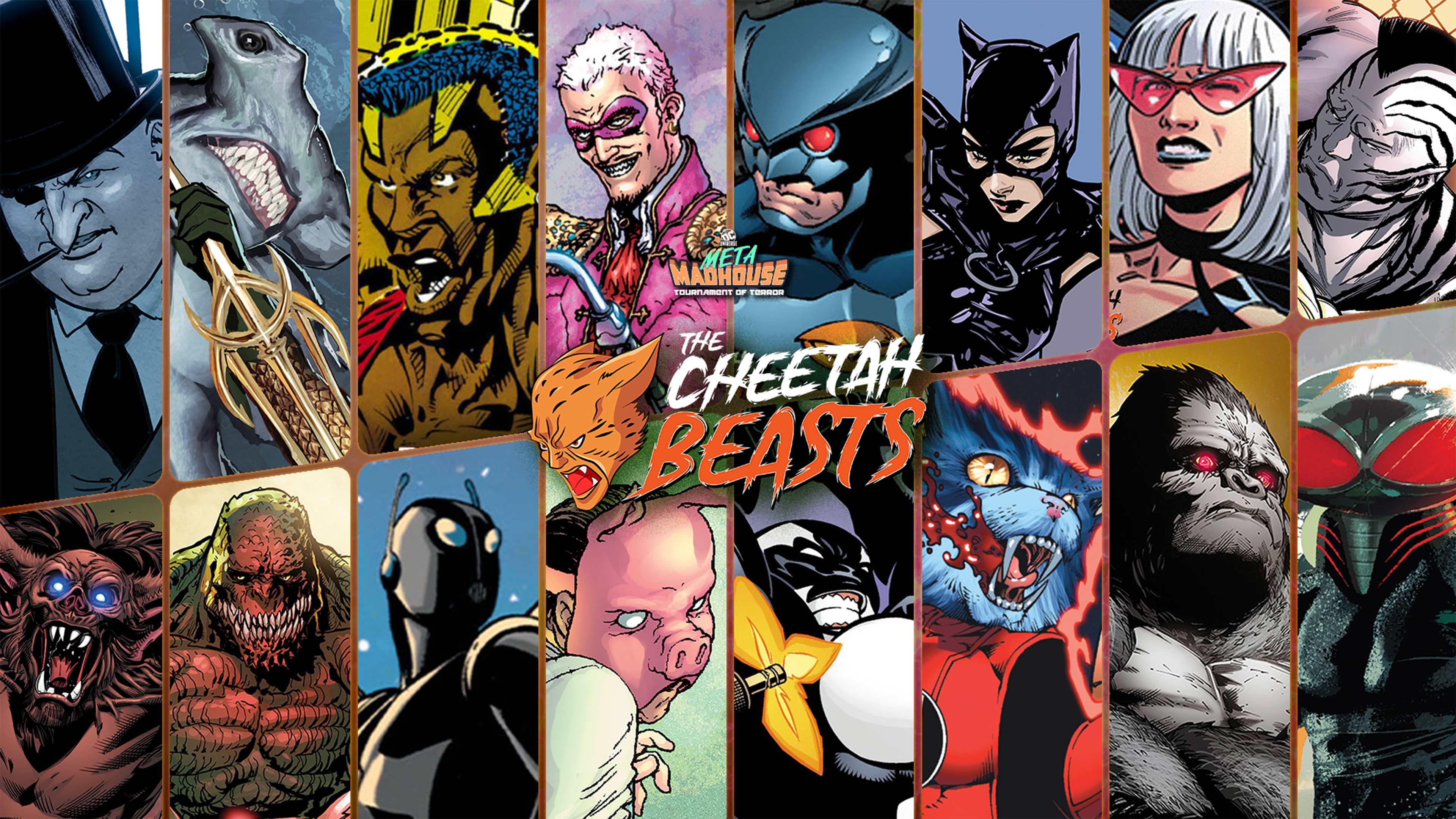 Meta Madhouse: Our Odds on The Cheetah Beasts Premiere Battle!

Reverse-Flash. Black Adam. And now, Brainiac. Three of the most powerful villains in the history of the DC Universe, each of whom survived four brutal days of battle against their peers in a relentless quest for martial dominance. This is Meta Madhouse: Tournament of Terror, and only one bracket remains before we come to our final four… The Cheetah Beasts. Wonder Woman’s arch-enemy has recruited a veritable menagerie of DC’s deadliest animal-themed villains to compete with the likes of Joker, Darkseid, and Luthor’s own tested contenders. Which of them will make the cut? Only YOU can decide, by voting on each match-up over the next week until Cheetah’s champion is chosen. (Votes which, I implore you, should be determined based on who you believe WOULD WIN IN A FIGHT, as opposed to, say, which you’d rather have as a pet.)

I’m Alex Jaffe- trivia master, investigative columnist, and “who would win in a fight” expert- and I’m here as I have been all month long to guide you through each of the blood pumping battles on tap for today’s grand bacchanal. Day 1 is always an exciting time, as we’re treated to a battling buffet of eight different fights between the initial sixteen qualifiers in each bracket. Who will survive once we thin the herd? Let’s take a look at each of today’s scheduled animal acts to find out. And as always, DC Universe encourages you to read up on our fighters in our special Meta Madhouse comics collection before you vote for your champions!

(IMPORTANT NOTE: this year, one fighter in each bracket has been secretly awarded a “Lazarus Pit Save” by a DC professional which will allow the fighter to overturn one vote which comes out against them and claim victory. For the Cheetah Beasts, that professional was prolific, accomplished DC artist and DCYOU Unscripted consultant Phil Jimenez. Which one did he pick? We won’t know until the save gets triggered! But until that happens, each fighter statistically has at least a 6.25% chance of victory.)

ROUND ONE: PENGUIN VS. MAN-BAT

Joke all you like about the rotund little beak-nosed misanthrope with flippers for hands. You wouldn’t be the first. Underestimated his whole life, the cunning and cruelty of Oswald Cobblepot has paved his ascendancy as one of the most powerful figures in the highly competitive criminal underworld of Gotham City. Man-Bat can be a terrifying enemy, to be sure. His beastly strength and aggression in conjunction with his impressive wingspan practically make Dr. Langstrom a flying werewolf.

But in this fight, The Penguin has three strengths in his corner: first, his comprehensive ledgers on Gotham’s criminal element, allowing his iceberg to float above it all. Second, his impressive array of trick umbrellas. And third, that he was there when his would-be usurper, the so-called “Emperor Penguin,” spread the Man-Bat serum across Gotham to keep Batman’s hands tied -- and was also there when Batman put together a cure. A trick umbrella loaded with a counteracting agent to the Man-Bat serum would be well within Penguin’s means, and exactly what he’d need to come out of this fight as the bigger bird.

This one’s a battle many have been dying to see: a bout between two aquatic animal based heavy hitters representing two different eras of the Suicide Squad. King Shark was Waller’s big muscle in the New 52 era of the team, and Killer Croc tagged in for him in the Rebirth era. Which of these two hunter-killers of the deep are the best at what they do?

The question is actually one which already has an answer. Practically speaking, Killer Croc is just a messed up guy with a skin condition. King Shark, known to the Hawaiian people as “Nanaue,” is literally the son of an ancient god. Croc can put up all the fight he wants, but he’s simply outclassed here. Need proof? Well, perhaps you may be surprised to learn that this exact fight already went down in 2018, for the Aquaman/Suicide “Sink Atlantis” crossover story. It was an impressive battle, to be sure, but spoiler warning: King Shark wins.

ROUND THREE: BRONZE TIGER VS. FIREFLY

Another Suicide Squad veteran, Bronze Tiger is correctly considered one of the greatest martial artists in the DC Universe. Some would consider Ben to be more hero than villain, but his propensity for getting brainwashed and mind controlled to fight for evil has compromised his moral position many a time. In a straight, fair fight, there aren’t too many humans who can keep up with BT. This is a man who fights on the level of Batman, Lady Shiva, and Richard Dragon.

Firefly, however, has two things Bronze Tiger does not: a jetpack, and a flamethrower. Firefly is typically a piece of cake for the utility belted crime fighters of Gotham City, but Bronze Tiger doesn’t have a whole lot going for him in the way of long range capabilities. All Firefly needs to do for the win here is fly straight up and unleash hell. I’ve yet to meet the man who can judo flip a fire.

ROUND FOUR: FLAMINGO VS. PROFESSOR PYG

Flamingo and Professor Pyg share the notable distinction of having debuted in the very same issue: both as villains during the terrifying tenure of Damian Wayne as Batman in the dark future of Batman #666. Like many of the villains introduced by Grant Morrison during this time, Flamingo and Pyg were both meant to present new and inventive threats to Batman and his allies, the likes of which they had yet to face. As Morrison himself once described him, Flamingo was designed to be an evil reflection of Batman’s own hero, Zorro. Once a capable crimefighter in his own right, Flamingo was lobotomized by a drug cartel until he became a nearly unstoppable killer, whose only joy came from eating the faces of his victims. An expert in weapons and vehicular combat on his trademark pink motorcycle, it took the combined power of Dick Grayson, Jason Todd, and Damian Wayne to take him down.

Professor Pyg, on the other hand, is just kind of a creep. He’s definitely closer to the methodical serial killer end of the Batman villain spectrum, as opposed to one capable of taking on Batman himself. Pyg is a monster, a mutilator, and an abomination upon the face of Gotham, but he isn’t a fighter. Matched against Flamingo, this side of bacon is going to end up roadkill.

ROUND FIVE: OWLMAN VS. ORCA

Make no mistake: he may be from a different Earth, and he may even be a different Wayne. But for all intents and purposes, Owlman is Batman. He has all of Batman’s cunning, all of his training, and most dangerously, none of his conscience. It’s not a stretch to say that Owlman may be the most dangerous man in this entire competition. The mutagenic Orca may have the strength of a killer whale, sure. But if our own restrained Batman was able to handle her, then this should be no problem for the de facto leader of the Crime Syndicate of America.

ROUND SIX: CATWOMAN VS. DEX-STARR

Like Star Sapphire in the Joker Maniacs, Catwoman’s another reformed femme fatale who snuck her way into this bracket based on her original history. (Or is that hiss-tory?) She’s a very capable fighter, and agile enough that Batman himself has been chasing her for 80 years and still hasn’t quite caught up. But Catwoman’s rap sheet doesn’t look so hot compared to the Red Lantern of Sector 2814. One of the most prized members of the Red Lantern Corps, Dex-Starr’s ring allows him to fly, create force fields and energy constructs, spew corrosive plasma, and a whole litany of other effects limited only by his vindictive imagination.

He is also, however, a housecat. A very, very angry one, even by cat standards, but still a cat. And if Selina Kyle has any supernatural ability to speak of, it’s her affinity for all cats of all kinds. Lions, tigers, panthers—even The Joker’s own hyenas, which are, genetically speaking, closer to cats than dogs—no Earthborn cat in the DC Universe has yet proven immune to Selina’s charms. And angry as this Red Lantern might be, at the end of the day, all Dex-Starr truly wants is to be loved.

ROUND SEVEN: MAGPIE VS. GORILLA GRODD

Magpie’s most notable accomplishment in DC Universe history is being the first villain in Post-Crisis continuity that Batman and Superman teamed up to defeat. But that doesn’t mean she was a particularly formidable one -- only that the newly operative Superman just so happened to be in the neighborhood at the time. Magpie was mainly an obsessive thief of alluring objects d’art, and apart from an affinity for constructing death traps showed no particularly notable martial prowess.

Gorilla Grodd, in addition to being… a gorilla, also has a helmet which allows him to control all but the most powerful minds. Even if she were a more capable fighter, Magpie’s weakness to her own obsessions makes her supremely susceptible to Grodd’s control. As Superman himself once remarked, she isn’t even one of the “good” villains.

ROUND EIGHT: BLACK MANTA VS. ZEBRA-MAN

Yeah, go ahead, laugh it up. He’s heard it all before. “Zebra-Man! The man with all the powers of a zebra!” Compared to the deadly, relentless Black Manta, this should be a day at the beach for Aquaman’s nemesis, right? Well, you couldn’t be more wrong. Zebra-Man may be a joke to you, but he’s a villain who comes straight out of the Silver Age, and who’s rarely been reconsidered since -- meaning he happens to sport one of those incredibly broken, overpowered abilities that only true Silver Age characters can claim. Zebra-Man is named for the black and white stripes which covered his body after his genre-typical lab accident, but his powers are so much more.

For those unfamiliar, Zebra-Man controls a force known as “diamagnetism.” This force allows him to attract or repel ANYTHING -- regardless of whether or not it’s magnetic, or even metallic. Meaning, should he wish, he can fling Black Manta around the arena at will, or even implode his enemy’s diving suit like a tin can. This is the dark secret of Zebra-Man: if he really wanted to, he could be one of the most powerful, terrifying villains in the DC Universe. That is, if he can ever get over his own insecurities about looking like a zebra. Will this be the day that Jacob Baker finally earns his stripes? I wouldn’t bet against him.

Which Beast will rule as the king or queen of the jungle? Vote now and discuss in our Community!