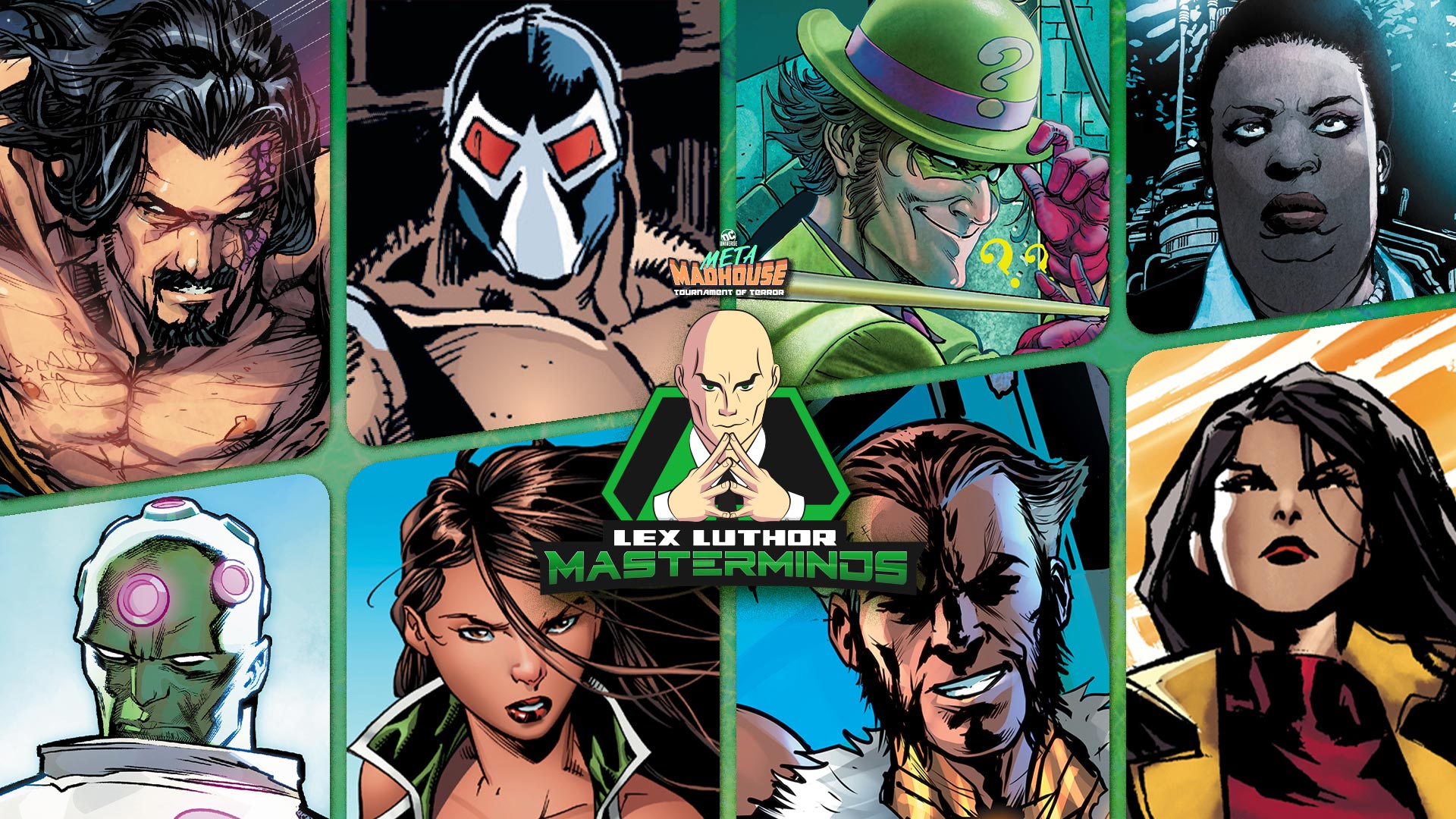 Meta Madhouse: Our Odds on the Brains vs. Brawn Matchups of Day 2!

Welcome back to Meta Madhouse: Tournament of Terror, where the greatest villains in the DC Universe vie for ultimate supremacy by defeating each other in single combat. How are our winners determined? By YOU, the voting public, who are given the opportunity to lend your own well read expertise to the outcome of each match-up as you deem most likely! (As opposed to, say, just voting for whichever character has your favorite costume or something. We’re all voting in good faith here.) And now, that’s really the case for the rest of the Luthor Masterminds Bracket. Because in an unprecedented turn of events, the Lazarus Pit Save has been activated after just the first day of match-ups, giving Talia al Ghul the victory over Deathstroke! But now that Talia’s Bendis-granted safety net has expired, she and everyone else who remains of Luthor’s chosen sixteen—now, eight—are subject entirely to your whims.

A lot of responsibility, no? That’s why DC Universe has commissioned me to lend a hand: I’m Alex Jaffe, trivia master, investigative columnist, and “who would win in a fight” expert, here to lend my own professional opinion on the odds and outcomes for each of the four matches we’ll bear witness to today. Plus, you can read up on each of combatants in our special Masterminds Collection before you cast your all-important votes. Our fighters are raring to go, and so are we, so let’s get started!

ROUND ONE: VANDAL SAVAGE VS. BRAINIAC

Vandal Savage tore his last opponent Ocean Master to shreds in the votes this weekend, and rightfully so. One of the DC Universe’s “final bosses,” as it were, the immortal Vandal Savage often has plans millennia in the making which require the full extent of the Justice League’s capabilities to thwart. Unnaturally strong and resilient, and with countless generations of battle experience to his name, most men would stand no chance against him in single combat. Brainiac, however, while better known for his prodigious intellect and keen eye for city-collecting, is more or less as powerful as Superman when it gets right down to one-on-one fighting thanks to his cybernetic enhancements.

Savage, as the figurehead of the Cult of Crime, is tangentially related to Bruno Manheim’s Intergang and its Apokoliptian weaponry, but apart from that stretch he simply lacks the technology to face Brainiac on his own level. Even then, Brainiac has shown an aptitude for adapting to even Fourth World tech, and the full extent of Savage’s resources, substantial as they are, may not be enough to take him out. The truth is that Superman’s villains tend to compete on a whole other level than most of these other guys. I mean, think about the kind of person who not only fights Superman, but KEEPS fighting Superman. League enemy or no, Savage just doesn’t have the stats to keep up. To pull this one off, Savage has got to have one hell of a master plan.

This is going to be today’s most interesting match. As with Deathstroke, her last opponent, Talia has something of a romantic history with the man who broke the Bat… and if that didn’t go well for Slade, then it doesn’t look so good for Bane either. In terms of psychology, Talia has an upper hand, as her ultimate rejection of Bane did a number on him at the time. In pure fighting ability, the two are more or less matched. But in raw physicality, there’s no denial that the venom in Bane’s blood gives him a distinct edge over his once-beloved. Let’s face it: Talia’s no slouch in the fighting department, but if Batman had trouble with this guy, then the Demon’s Daughter is probably about to meet her reckoning.

ROUND THREE: THE RIDDLER VS. RA’S AL GHUL

Riddle me this, DC Universe: what do you call an unmarried firestarter? A miss-match. After whacking the decrepit Dr. Sivana upside his fragile, egg-shaped head with a question mark-emblazoned cane, The Riddler has ended up with much more than he bargained for here in the quarter finals. No number of brain teasers can prepare him for the Demon’s Head. And the thing is, Riddler himself KNOWS this. After all, he spent most of the story in “Batman: Hush” trying to run away from this guy after crossing him, knowing full well what was in store should they ever catch up. The only riddle here is: will Eddie even show up to this match and face his demise like a man, or will he pull a no-show and forfeit altogether? Don’t bother warming up the Batcomputer; I think we all know the answer to this one.

Amanda Waller is one government agent you don’t want to mess with. She’s somebody that BATMAN doesn’t want to mess with. She’s a kickass secret agent, an unrivaled spymaster, and she knows all the dirt on where all the bodies are buried. But Lady Shiva, the greatest martial artist and deadliest woman on Earth, just wiped the floor with Watchmen’s Ozymandias, a guy who can catch bullets. Waller had what it took to stand up against a lowlife like Black Mask, but… well, there’s no shame in losing to Lady Shiva. Some would even consider it an honor to see her work, even if the result is inevitable defeat. Bottom line: somebody call Mr. Gorbachev, because Lady Shiva is about to tear down this Wall.

Which devious masterminds will you choose? Vote now and discuss in our Community!