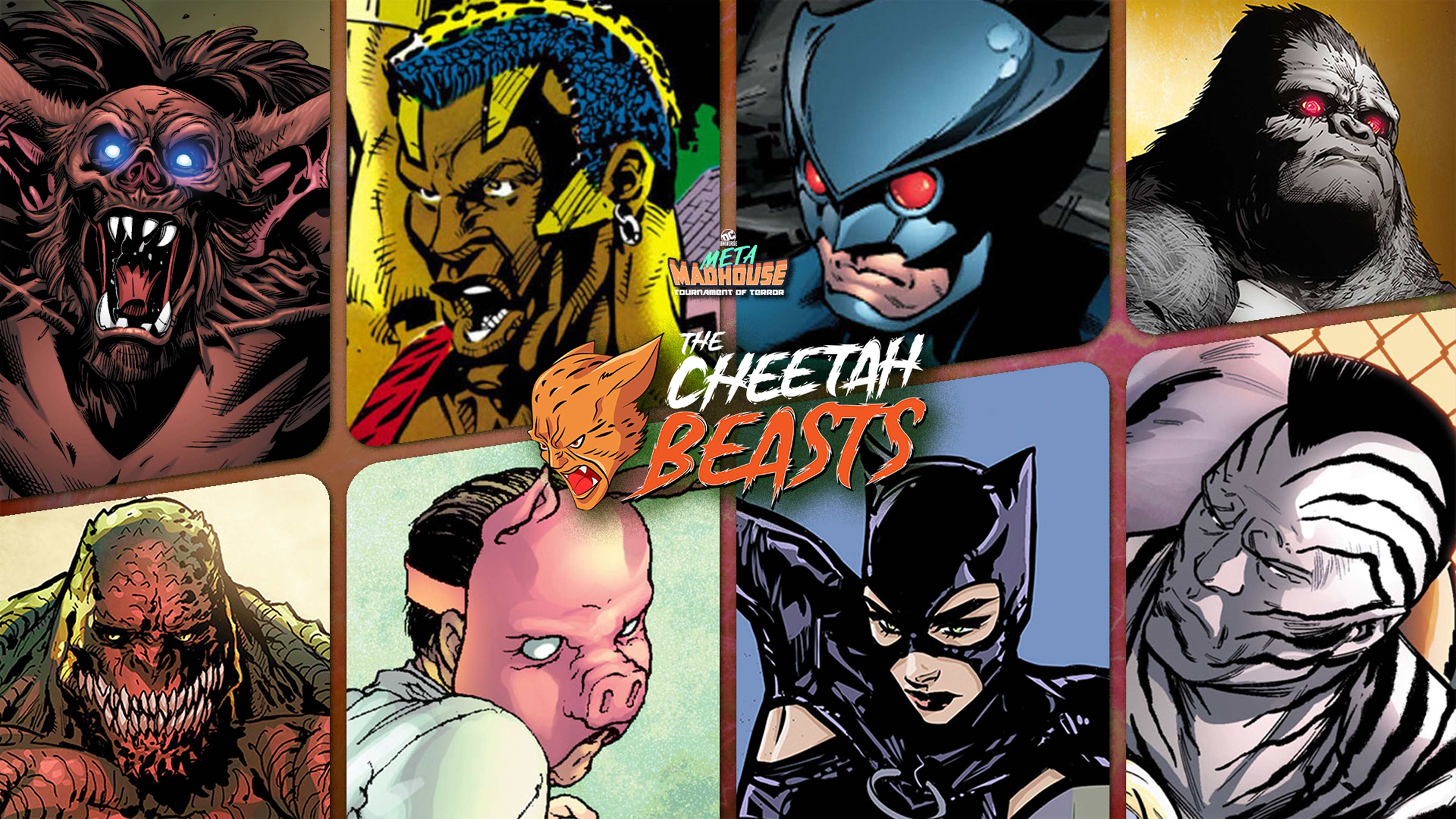 It’s a beautiful day for a battle… or four! Welcome back to Meta Madhouse: Tournament of Terror, where the DC Universe’s greatest villains vie via violence vis-a-vis victory! Today, we continue our walk on the wild side through the Cheetah Beasts bracket, where the most notorious animal-themed Super-Villains have all been corralled into fighting one another -- all for the honor of representing Cheetah in our showdown between the final four. With a surprise Lazarus Pit Save triggered early on the diamagnetic Zebra-Man, the power to determine who wins each of these heated contests lies truly in YOUR hands… for, as always, the winner of each fight is selected by which villain gets the most votes! (Votes which, as we’ve insisted, are solely determined based on WHO WOULD WIN IN A FIGHT. Not, say, who could eat the most hot dogs or whatever. Wait for that one in Hotdogtober.) And as always, you can sample the bonafides of these Beasts in our special Meta Madhouse comic collection!

I’m Alex Jaffe, trivia master, investigative columnist, and “who would win in a fight” expert, here to provide my professional analysis on who the real and rightful winner SHOULD be in each match… but when it comes to comic book fights, there’s always a chance of an upset. Let’s take a closer look at the melee du jour before casting our votes for today!

ROUND ONE: MAN-BAT VS. KILLER CROC

So, I guess Croc managed to take down the shark demi-god. Not what I expected, I’ll admit, but I suppose Croc came ready to rumble after their last battle in Atlantis. Today, he stands against Man-Bat, an enemy gifted with flight. But Waylon Jones’ crocodile hide is too thick for the quick, light attacks of Man-Bat, and the mutated Dr. Langstrom may find himself an Ozzy Osbourne-style snack the minute he swoops in for the kill. Careful now, Crocky -- that’s how pandemics start.

Bronze Tiger and Professor Pyg were both underdogs in their respective fights. But Tiger’s combat experience with both the Suicide Squad and the League of Assassins allowed him victory over his airborne enemy, while Pyg managed to outcreep Flamingo, the eater-of-faces, by singing opera at him too loud, I guess. As unlikely as Pyg’s victory was as a combatant with little in the way of combat skills to speak of, here he stands against one of the most skilled martial artists in the DC Universe. Pyg’s advantage when it comes to battle is in his ability to psych out his opponent. But Bronze Tiger has seen some real stuff in his time, and is unlikely to be fazed here. If you’re looking for an exciting, evenly matched competition, look elsewhere. But if you’re just looking for the catharsis of seeing a sicko like Pyg pummeled into a fine paste, then step right in and watch the pigs fly.

ROUND THREE: OWLMAN VS. CATWOMAN

Now, here’s an interesting one. You could make a solid argument that nobody really knows Batman better than Selina Kyle. In Huntress: Year One, Catwoman breaks down each of the seemingly impenetrable Batman’s weaknesses and blind spots to the newly arrived Helena Bertinelli, suggesting that she’d be more than capable of taking Batman down in a fight if she wanted to. But while Owlman is like Batman in many respects, he’s also something different. Something darker, and utterly unmerciful. This is a Wayne who only has eyes for Earth-3’s Superwoman, and even she isn’t exempt from his wrath.  If Selina goes into this fight making the mistake that she’s fighting Batman, she may well end up a skinned cat.

ROUND FOUR: GORILLA GRODD VS. ZEBRA-MAN

Even more imposing than Grodd’s gorilla strength is the telepathic abilities granted to him by his signature helmet. But as Zebra-Man proved in his upset battle against Black Manta, toys can be taken away. With Zebra-Man’s power of diamagnetism, he can attract or repel any person or object at will -- including Grodd’s helmet, followed by Grodd himself. This match will be decided seconds after the bell rings: either Grodd will take control of (the admittedly weak-willed) Zebra-Man, or Zeb-Man will yank that hat right off the big ape and start playing keep away. Either way, it should prove entertaining. But as interesting as Zebra-Man’s brief foray into this tournament has been, Grodd brings with him a great deal of combat and strategic experience that Zebra-Man simply lacks. If this is a contest of outmaneuvering, then Grodd is the gorilla to beat.

Which wild beast will win? Cast your vote now and then talk about it in our Community!