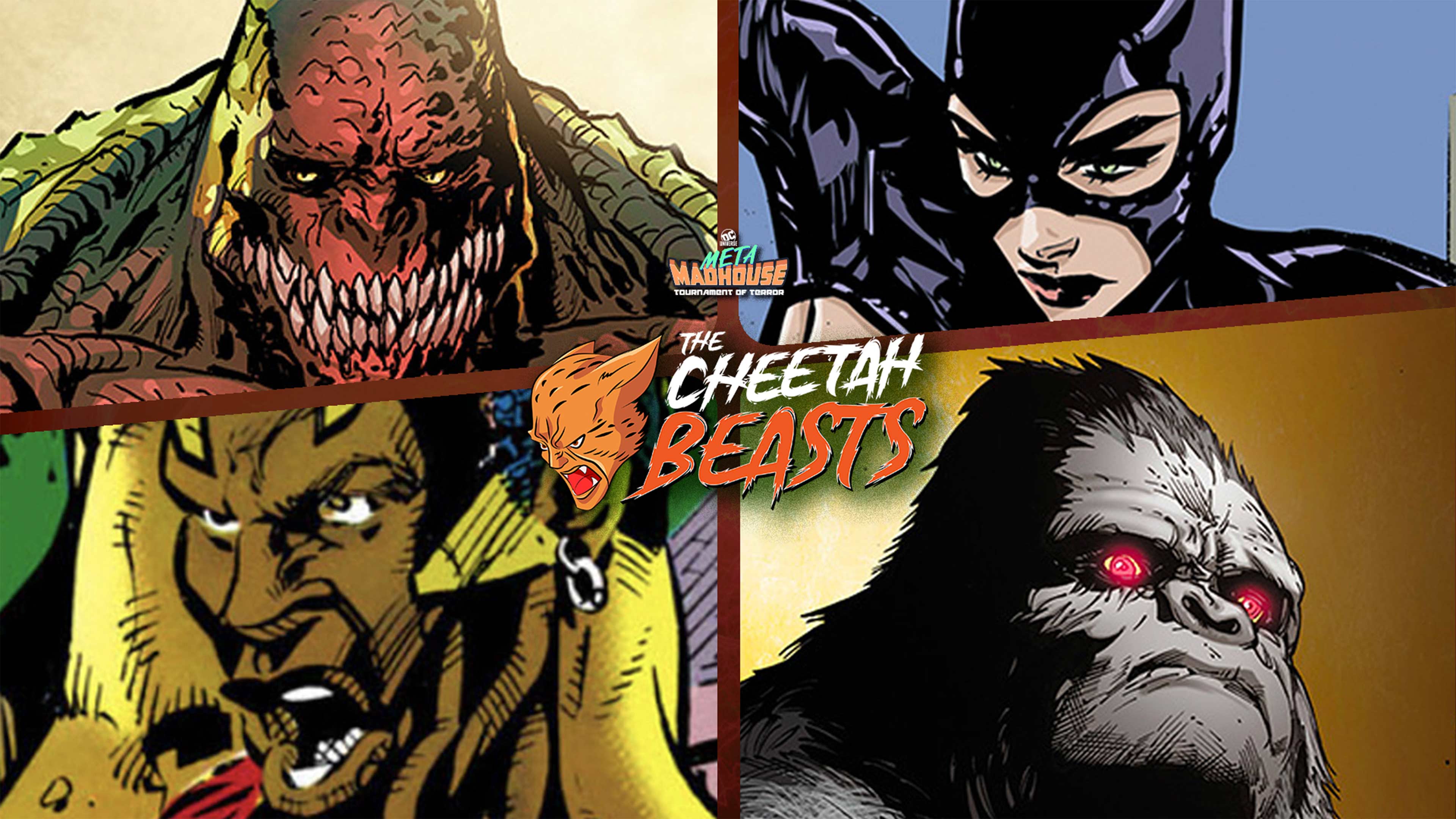 Welcome back to our ongoing analysis of Meta Madhouse: Tournament of Terror, where every single match, no matter how unlikely, is accounted for based on prior experience, abilities and experience, relative psychology, and strong gut feelings informed by thousands of comics and videos. Nearly each weekday this entire month, we’ve witnessed some of the most exciting match-ups in super-villainy -- and each verdict is ultimately determined by YOU, our DC Universe community, in our daily polls. (Polls which are filled in universally for each scheduled match-up based on who would win in a fight, naturally. As opposed to, say, the character with whom you’d most like to visit a theme restaurant, get way too drunk, and become banned for life from or something.)

We know you’ve all got your own strong opinions on each of these fights, perhaps based on reading their adventures from our special Meta Madhouse comic collection. But if you’d like to borrow a opinion or two of ours, that’s what I’m here for. I’m Alex Jaffe, trivia master, investigative columnist, and “who would win in a fight” expert, here to deliver my predictions for the semi-final matchups of the Cheetah Beasts: the animal-themed bracket run by Wonder Woman’s arch-nemesis, the winner of which will go up against our three already determined winners through rite of combat. Bronze Tiger, Killer Croc, Catwoman, Gorilla Grodd. Which one will face our fearsome finale? Read on, and we may get one step closer to determining just that before you cast your votes.

ROUND ONE: BRONZE TIGER VS. KILLER CROC

Ben Turner and Waylon Jones have each done a pretty impressive job so far of beating the odds and pummelling the competition into submission, with little but their own natural gifts. Bronze Tiger, despite being unable to fly, used what can only be truly remarkable acrobatics to ground the Firefly, and then made short work of Professor Pyg. Killer Croc, in his own right, got his revenge match against his aquatic demigod counterpart King Shark from the “Sink Atlantis” storyline, and came out the victor -- and followed that up by making a meal out of Man-Bat. Today, we have a classic match-up of skill versus strength. Bronze Tiger is recognized as one of the world’s greatest martial artists, often sparring with Richard Dragon, Lady Shiva, and Batman himself without missing a beat. Killer Croc has a hide that’s tough as nails, teeth and claws which can rend nearly any man asunder, and the strength and will to throw rocks at his enemies. Sorry, BIG rocks.

As imposing as Killer Croc may be, he’s not exactly the most precise fighter. Among many other forms of hand-to-hand combat, Bronze Tiger is a master of judo, a martial art best utilized by using an otherwise overwhelming opponent’s momentum against them. As Killer Croc charges recklessly at his prey, Bronze Tiger has plenty of experience acting as a fulcrum to redirect that energy against his enemy. Both Bronze Tiger and Killer Croc have had turns with the Suicide Squad. But Tiger spent his taking on enemies which would give even Croc a tough time. Take Shrapnel, for instance: while Shrapnel’s body is composed purely of jagged metal, Bronze Tiger still managed to beat him back through pure application of his art. Tiger even managed to take Deathstroke the Terminator down in Slade’s own series. Killer Croc has been getting through this competition so far purely on the merit of his brute force. And sure, if he gets a clean shot in, he has the strength to tear through his merely human opponent. But if Bronze Tiger’s skill and experience is anything to go on, this is where Croc’s gravy train to victory finally derails.

ROUND TWO: CATWOMAN VS. GORILLA GRODD

As an evil counterpart to Batman himself, it’s no secret that Owlman was an odds-favorite to take the Cheetah Beats bracket for himself. It was an all but assured victory which could not be stolen from him… but when you drop a word like “unstealable,” that’s practically catnip when it comes to Ms. Selina Kyle. Owlman had all the advantages going in, to be sure. Strong, skilled, an evil genius, and entirely prepared to hit a lady. But while Catwoman can throw down with the best of them, that’s not what she’s about: Catwoman is primarily a thief. And if there’s something in Owlman’s utility belt which could have eliminated him from the competition- say, perhaps, a device which would maybe warp him back to his home on Earth 3- all that Catwoman had to do was reach out and take it.

Unfortunately for her, though, Grodd’s already made quick work of one master thief in Gotham City thanks to the power of his mind control helmet. Like the quickly beaten Magpie, and many of Gotham’s colorful criminals for that matter, Catwoman is a slave to her compulsions. That lack of willpower will make Batman’s sweetheart easy pickings for Grodd and his telepathy. But then again, Catwoman has beaten the odds before. Who’s to say she didn’t pilfer off with some essential circuitry within her simian enemy’s favorite accessory between matches? Even without the helmet, Grodd is a physically formidable opponent, but Catwoman’s taken on big galoots before. All she’d have to do is follow Bronze Tiger’s lead. That is dependent on a rather substantial number of “ifs,” though… does Catwoman have it in her to pull off one more impossible score? The odds say no, but she’s beaten the odds before.

Which bestial villain will make it to the Beasts' championship? Vote now and talk about your choice in our Community!