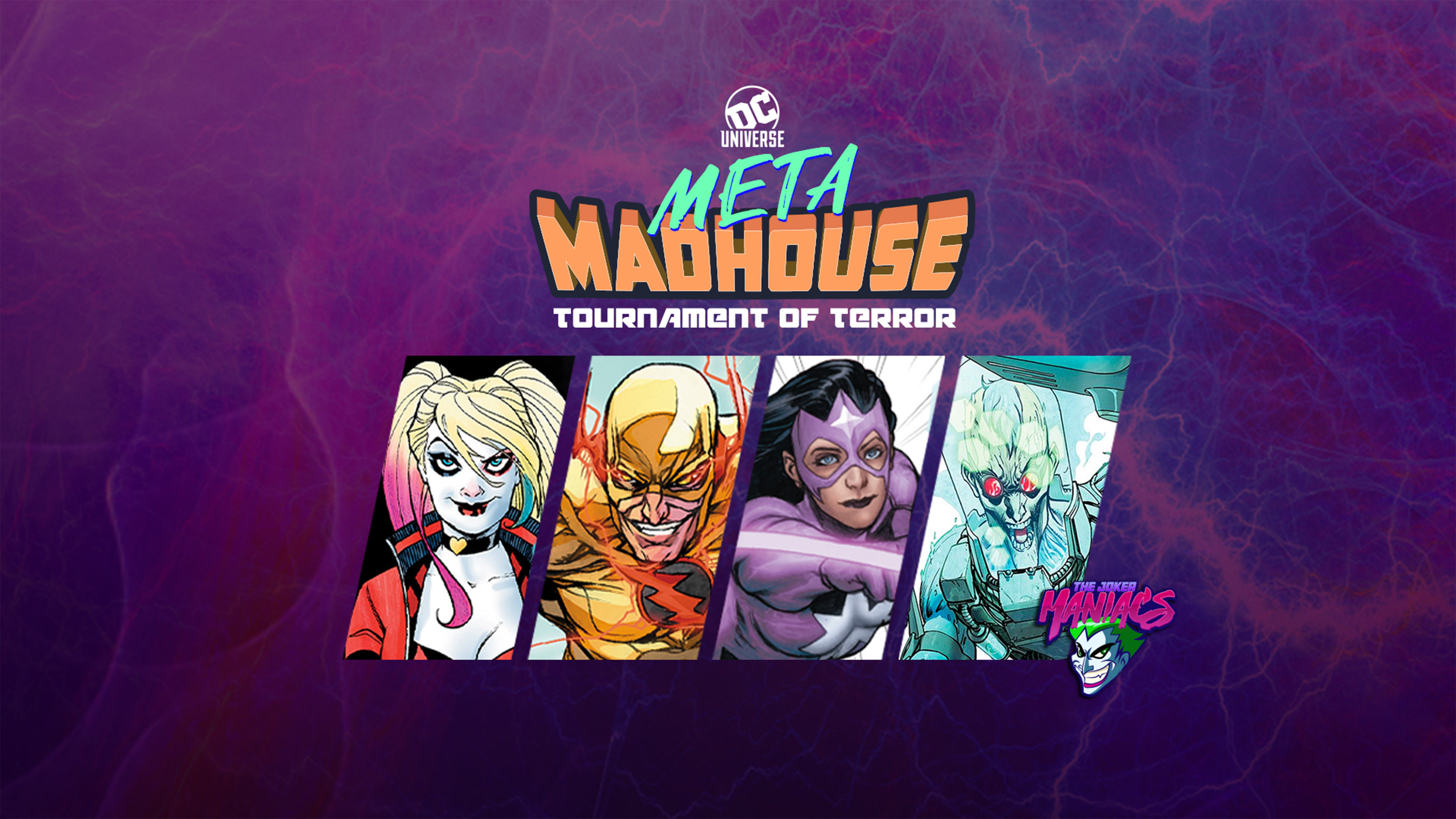 Now you wanna get nuts?! Come on! LET’S GET NUTS! Here we are on Day 3 of our fight-to-the-finish Meta Madhouse: Tournament of Terror competition, where the most notorious villains in the DC Universe battle for ultimate supremacy. We’re all the way up to the semi-finals for our first faction, The Joker Maniacs, where a promising field of sixteen fighters has been winnowed down to a final foursome through relentless combat. Combat, by the way, where the outcome is always determined by YOU, our voting public. In any democratic system, voting is the most powerful tool you have, so make sure it counts. By which we mean make sure you’re voting for who would win in a fight, rather than who your favorite is. But you’ve been doing that all along, of course, so why even mention it?

But even though the ultimate power lies with you, you may seek to perform your due diligence before committing your vote by consulting some professional analysis. I’m Alex Jaffe, Trivia Master, investigative columnist, and “who would win in a fight” expert, and I’ll continue to be here for every day of Meta Madhouse to provide that analysis you crave. Today we have two matches between two cold-hearted villains and two scrappy anti-heroes with checkered pasts. Which prickly pair will advance to the final bout of The Joker Maniacs? With this bracket’s Lazarus Save now expended, the decision now lies entirely within YOUR hands!

ROUND ONE: HARLEY QUINN VS. REVERSE-FLASH

The Joker Maniacs were once distinguished by a line-up packed to the rafters with Arkham Asylum regulars. But all of the Gothamites have fallen now to Mr. J’s surprise wild card contestants, save for the fantabulous domination of one Harley Quinn. First, she smashed Two-Face until he was heads-over-tails. Then, even after the votes came out AGAINST our Bensonhurst Baby in her maniacal match-up against Poison Ivy, a last-minute Lazarus Save allowed their relationship to blossom in the field of battle, clearing Harley’s path to the next round… and leaving her without a safety net for what might be the most mismatched battle of her life.

The Reverse-Flash can move faster than thought. He can casually travel back to the day your parents met, and ensure that you would never be born. He’s terrifying in a way that perhaps not even The Joker can compare with. If Reverse-Flash wills it, he doesn’t merely kill you, or ruin your life. He can erase you from the timeline completely, in an infinitesimal fraction of a blink of an eye. To all but the most powerful entities in the known cosmos, he is completely unstoppable. He’s not a contestant. He’s a malevolent force of nature. The very darkest properties of the Speed Force, manifested in a cruel, petty man who seeks nothing but his own glory.

This is all to say that in a purely physical match-up, Harley Quinn is done for. She can’t hit him with a hammer, or a bat, or a pop-gun. She can’t flip out of his way with her merely Olympic level acrobatics. But she does have one thing going for her: Harley Quinn has a lifetime of experience when it comes to dealing with powerful, cruel, and petty men. Harley may not be able to keep up on foot, but if she can get him to listen to her, she can keep up with wit. Underneath the yellow rubber costume, Eobard Thawne is just a man who fears rejection -- a frightened, insecure coward who uses his super speed to run from his problems until they’re no longer visible behind him. It wouldn’t be the first time that Harley used her psychoanalytic acumen to escape from certain death. And if anyone can get through to the tormented Eobard, it may be Dr. Harleen Quinzel.

In what has most certainly been the biggest upset in the competition so far, Gotham City’s frigid Mr. Freeze has placed the nigh-omnipotent Doom Patrol foe Mr. Nobody on ice. It’s extremely surprising that this happened, because I KNOW that YOU’RE ALL VOTING FOR WHO WOULD WIN IN A FIGHT, AND NOT WHICH CHARACTER YOU JUST KNOW BETTER. That can’t possibly be the case here, so let’s dismiss that thought and deal with the reality here: the Misters have fought, and Freeze has won.

How could this have happened? Well, what viewers of DC Universe’s original Doom Patrol series may not be aware of is that in the comics, the seemingly invincible Mr. Nobody does have one weakness: he loses all of his powers whenever masked or hooded, reverting to his mundane, mild-mannered human body as Eric Morden. Freeze may have just grown bored with Nobody’s prattling and grandstanding to the viewers at home and just straight up blasted him with a freeze gun, coating his head with a sheet of ice -- or a hood of snow. A long shot? Sure. But hey, it’s definitely what happened, because this is not a popularity contest.

But I’m afraid that after an ice stroke of luck in his favor, this is where Mr. Freeze’s road to victory ends. Because now in his way stands Carol Ferris, a woman who wields the power of love as a weapon. Forever pining for his beloved Nora, there are few people I can imagine who would be MORE susceptible to the powers of a Star Sapphire. Carol’s violet ring is exactly the tool needed to melt the icy heart of Freeze.

On the other hand…. hey. He could get lucky again. Remember when he was in that movie with Arnold Schwarzenegger? That was fun.

Is your favorite still in the running? Vote now and talk about Meta Madhouse in our Community!