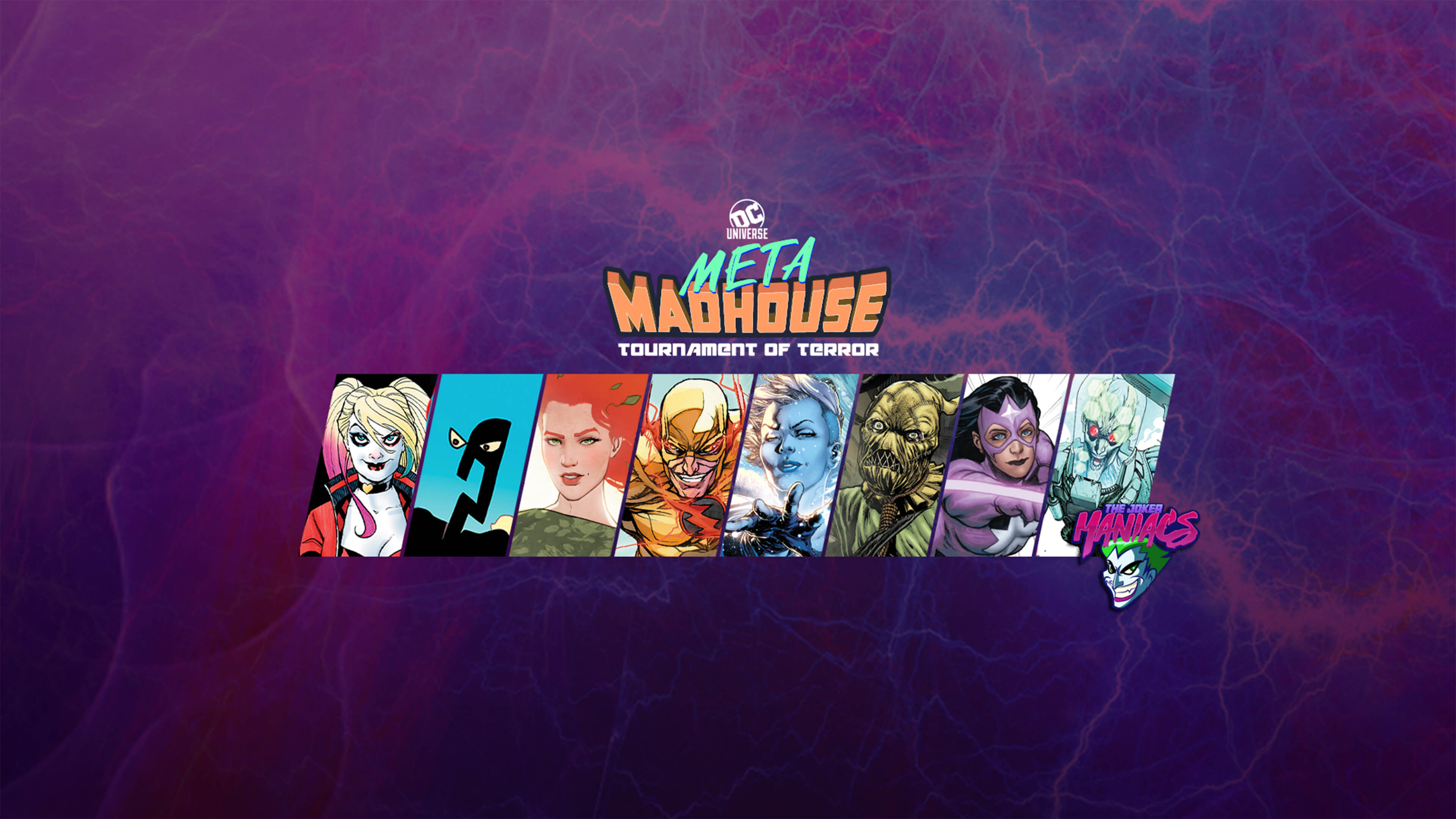 Welcome back to the Madhouse! After a wild weekend of meta-madness, we’ve narrowed a wide field and reached the Quarter Finals for The Joker Maniacs! Eight members of The Joker’s chosen fighters will square off today in one-on-one combat, where YOU, our objective voting public, who are definitely NOT voting for your FAVORITE CHARACTERS, and instead PURELY VOTING ON WHO WOULD WIN IN A FIGHT BETWEEN THESE TWO, determine the winners! But perhaps before casting your vote, you’d prefer to consult with a professional.  Worry not! I’m Alex Jaffe, Trivia Master, investigative columnist, and “who would win in a fight” expert, and I’m here to deliver my professional opinion on who has the edge and the odds in their favor for each of today’s scheduled bouts. With introductions handled, let’s take a deeper look into each of the four fights on the docket for this Madhouse Monday.

(IMPORTANT NOTE: One character in each of the four factions in Meta Madhouse has been awarded a “Lazarus Pit Save,” allowing them to automatically win one fight if they lose their vote. After the first round, the chosen Lazarus Pit Saved character for The Joker Maniacs is STILL IN PLAY -- meaning the Lazarus Save can still be triggered at any time. Because of this, everyone in this bracket still has a minimum 12.5% chance of claiming victory.)

ROUND ONE: HARLEY QUINN VS. POISON IVY

Last Friday, a theory began to emerge about the arrangement of this particular bracket: that the seed placement may have been influenced by The Joker himself, leading to mismatches like Reverse-Flash versus Condiment King, and an emotionally compromised face-off between Poison Ivy and her animated beau Kite-Man. But if any evidence was missing before that Joker’s chalk-white hand was guiding the fate of his Maniacs, it can be found right here. In a cruel twist, The Joker’s sweet puddin’ has been pitted against the only woman who stands in the way of their rotten romance. The Joker’s modus operandi when trying to reclaim Harley is to separate her from her emotional support network; it should come as no surprise that he’s arranged Meta Madhouse to do the same. No wonder Joker was so eager to join this year as one of our coaches… using our platform to rekindle his relationship may have been his ulterior motive all along.

Be that as it may, it’s my duty to break down how this fight will likely play out. On (recycled) paper, the powerful, plant controlling Poison Ivy should have no problem dispatching an opponent whose main physical asset is her killer backwards salto. But even more so than in her previous match against Kite-Man, Poison Ivy has a particular weakness for Harley. First, there’s the physical aspect: Ivy has already bestowed Harley Quinn with a chemical treatment which renders her immune to Ivy’s poisons and pheromones, allowing Harley to always be herself around her partner-in-crime. From an emotional aspect, every time Ivy and Harley have been on opposite sides, it’s always been Ivy who’s surrendered first for the love and support of her favorite blonde. After all: when all else fails against Poison Ivy, Harley knows that there’s always “the nuclear option.”

But how much will the emotional factor play into the final vote? Will Ivy be able to put her feelings aside to claim victory, as she did before in Round One? All we can say for sure is that whoever loses, The Joker wins.

ROUND TWO: KILLER FROST VS. REVERSE-FLASH

Much like Poison Ivy, Killer Frost was able to push past her emotional weaknesses in the previous round to claim victory over the manipulative Doctor Psycho. Good for her! This fight, on the other hand, is going to be considerably tougher for the one-time JLA member. While there’s certainly a long history of speedsters squaring off against ice-based enemies, these days Captain Cold generally needs to assemble a whole crew of Rogues to even stand a chance against The Flash. Reverse-Flash, as Barry knows too well, is just as powerful and capable as he is, but with a ruthless streak which allows him to use the Speed Force in ways The Flash himself would never dare to dream of. By the transitive property, a lone freeze-powered opponent shouldn’t trouble a man who can do alone what it take an entire posse of lesser Flash villains to accomplish.

With that said, Killer Frost does have one weapon at her disposal that a Captain Cold wouldn’t: her heat vampirism. After all, what is heat but the kinetic energy of molecules and atoms? The Speed Force has always played a little fast and loose with physics, but let's be honest, so have most Ice Villains. There’s a huge amount of fodder in play for Killer Frost to absorb and unleash her ice powers on an apocalyptic level. This kind of ability makes her an essential asset in a team setting, to be sure. But in a one-on-one fight with the fastest man of the future, this battle may be over before Caitlyn gets her chance to strike back.

ROUND THREE: MR. NOBODY VS. MR. FREEZE

Our second frigid face-off of the quarter-finals, and a battle of the Misters! Say, why is Mr. Freeze a mister, anyway? Victor Fries is a doctor. Does he lose that just because he’s adopted the life of a Super-Villain? These are the kinds of questions you can expect Mister Nobody to ask as he cuts into Freeze’s sanity.

Freeze is a man of science, who often claims to have deadened his emotions even when it’s obvious to everyone that it’s his emotional trauma which drives him. Between Mister Nobody’s abilities to casually disregard the laws of physics which Freeze relies on, and the psychic manipulation which allows him to easily walk through Freeze’s emotional barriers, you don’t have to be a doctor to tell that it’s Freeze who’s going to be left out in the cold.

ROUND FOUR: SCARECROW VS. STAR SAPPHIRE

After a tense face-off with Victor Zsasz, Scarecrow has unfortunately found himself up against an opponent fresh from demolishing the last Arkham-based psychiatrist who dared to challenge her. The jury may still be out on whether Star Sapphire actually counts as a Super-Villain, but as long as she’s here, Carol Ferris has no compunction about using her cosmic powers against any of the other creeps around here.

Okay, so Hugo Strange wasn’t much of a challenge. But what about Scarecrow and his signature fear gas? Well, let’s look at the facts. As Star Sapphire, Carol doesn’t just wield a ring which allows her to, say, breathe in space, therefore rendering any aerosol-based weaponry useless against her. She’s also a veteran of the Sinestro Corps War, bravely fending off legions of enemies whose main means of assault is their ability to inspire fear throughout the universe. Do you really think that Carol’s gonna have any problem handling with some bag-headed wannabe? Scarecrow can’t even get Sinestro to take his phone calls. Back to the cornfield, little boy.

Who do you think will win in our round of eight? Vote now and let us know in our Community!