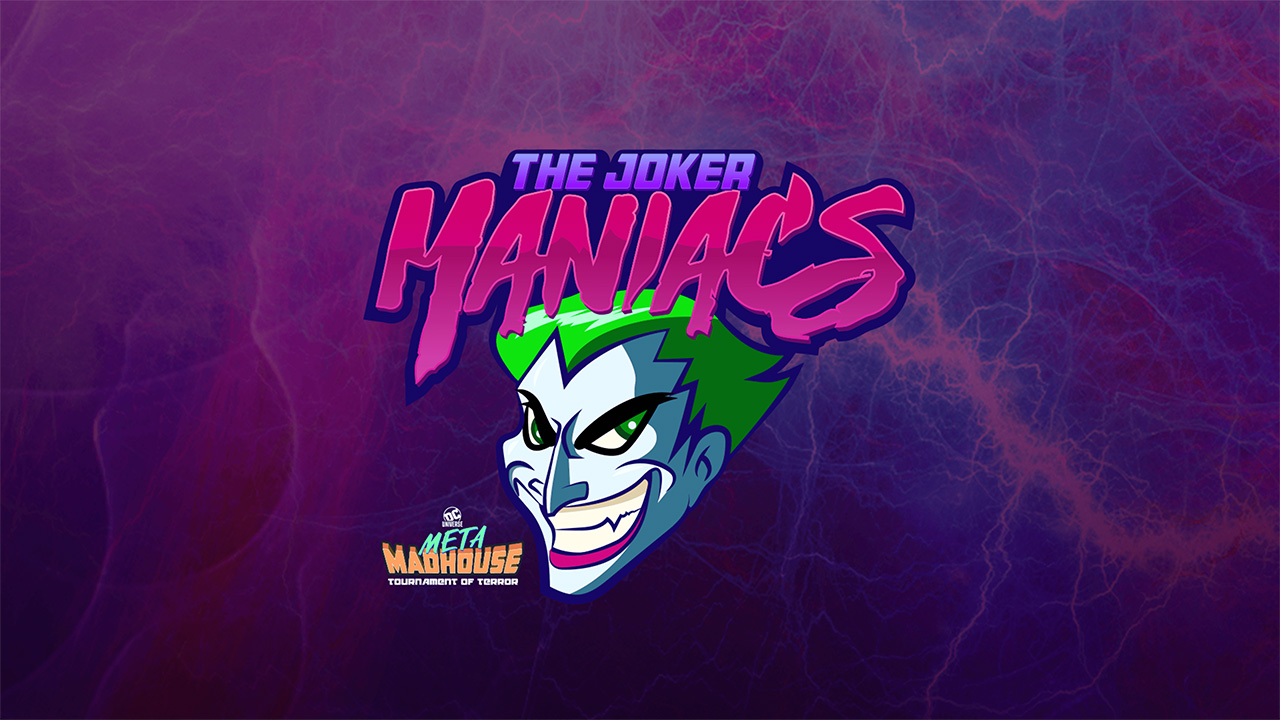 The Tournament of Terror begins! Welcome back for DC Universe' second year of Meta Madhouse, the annual competition where the greatest icons of the DC Universe beat the ever-loving snot out of each other for ultimate dominance -- and YOU decide the winners! I’m Trivia Master, investigative columnist, and “who would win in a fight” expert Alex Jaffe, and I’ll be here with you every step of the way through this bracket for a professional analysis on the odds of who SHOULD, by all rights, be the victor of each round. To determine this, we’ll consider each combatant’s powers, skills, abilities, psychology, and experience with one another. We will also assume that all of you voting out there are doing so in good faith for who they believe would win IN A FIGHT between these characters, as opposed to just who they LIKE BEST. (That IS what we’re all doing, right?) Okay, with that settled, let’s take a look at the first round of THE JOKER MANIACS, this year’s crop of Gotham-based villains… though it wouldn’t really be a Joker team without a few wild cards. So read up on the odds and then cast your duly informed votes!

(IMPORTANT NOTE: one of these characters has been secretly awarded the “Lazarus Pit Save,” allowing them to progress even if they lose their vote. Because of that, ANY character at this stage has at least a 6.25% chance of victory.)

ROUND ONE: TWO-FACE VS. HARLEY QUINN

There’s no doubt that Two-Face has worked hard to earn his spot as Gotham City’s Public Enemy #2. But even as one of the most notorious crime bosses in the DC Universe, Harvey isn’t particularly well known for his fighting ability. And let’s face it: the fact that he’s got to stop at crucial moments to flip a coin and determine what comes next is going to be a big marker against him in this bout.

Harley, on the second hand, isn’t just a world class athlete and a horror with a hammer or a beast with a bat -- she’s also a former psychiatrist at Arkham Asylum. Here’s a fun fact for you: the first villain who was ever canonically committed to Arkham? Two-Face. Harley’s got all the tools she needs to get way into Two-Face’s head, and spring out with a clear win.

ROUND TWO: POISON IVY VS. KITE-MAN

This shouldn’t even be a contest. Often underestimated, Poison Ivy is one of the most powerful metahumans on Earth. With an innate connection to The Green, the ability to control all plant life, and pheromones that have even successfully dominated the entire planet, there’s good reason Lex Luthor has been so hot to get her on the Legion of Doom.

However… Poison Ivy does have a weakness for people who treat her with dignity, respect, and genuine admiration. And fate has dictated that this match pit her against her cheesy lovable loser boyfriend (and second-sexiest man in the DC Universe), Kite-Man. Honestly, we wouldn’t be too surprised if The Joker booked his bracket this way on purpose, just to mess with Ives’ head. Could Poison Ivy beat a guy whose only power is that he bought a kite once? Obviously. But is she WILLING to kick this particular sad puppy? The answer may be “hell nah.”

Killer Frost is far more than just another ice villain. In addition to her versatile cryokinetic abilities, Caitlyn Snow is also what we call a “heat vampire.” To fuel her ice powers, Killer Frost drains the heat from her environment, warm objects, and even living creatures around her, freezing them with a touch. Killer Frost is an incredibly powerful asset to any team, and one which both Batman and Amanda Waller have fought over in the past.

Her greatest weakness, however, is her own insecurities. Caitlyn has a hard time seeing herself as anything more than a freak of nature, doomed to be isolated from the humanity she craves. Unfortunately, that emotional vulnerability is ripe for the plucking by a telepath like Doctor Psycho. Killer Frost’s lack of willpower and self confidence will be her undoing in this match, allowing Psycho to take control from the start.

That is, unless she can impale him on an icicle first.

ROUND FOUR: REVERSE-FLASH VS. CONDIMENT KING

If you ever needed proof that The Joker had some say in these initial match-ups between his Maniacs, this is it. With the power to run faster than light and change the course of time itself, Reverse-Flash is one of the most horrifyingly powerful villains in the history of the DC Universe, and the stuff of Barry Allen’s nightmares. Any speedster is nearly impossible to beat in a one-on-one competition, and the ruthlessness with which Eobard Thawne uses his speed makes him an early favorite to win this entire competition. They don’t get much more powerful, or much more evil.

Condiment King, meanwhile, is a guy who has nozzles hooked up to a backpack that shoots condiments. They’re not even, like, particularly acidic. I guess it would hurt if you got some sriracha in your eye? Reverse-Flash’s mask has lenses, though. Geez. Well, maybe he’ll get lucky and Thawne will, like, slip on a ketchup packet or something? But let’s not kid ourselves. With Reverse-Flash’s time bending powers, it’s extremely likely that this match will LITERALLY be over before it begins.

ROUND FIVE: ANTON ARCANE VS. MR. NOBODY

If you can claim to be Swamp Thing’s arch-enemy, then you’re probably a significant force to be reckoned with. Such is certainly the case for Anton Arcane, an avatar of the elemental plane of The Rot with mastery over death itself. The very concepts of entropy and decay are tools at his disposal, which he can (and has) used to claim sole dominion over a dead and wasted Earth. If an opponent has flesh that can rot and blood that can curdle, then they’ll prove no match against the likes of Arcane.

Mr. Nobody, however, is something more than flesh and bone. He is light and shadow; ink on paper; dadaism incarnate. Mr. Nobody can drain sanity from his enemies, change the fabric of reality around him to suit his needs -- and most importantly, he cannot die, and thus The Rot holds no power over him. In nearly any other bracket, Arcane would be one of the most terrifyingly powerful entries. But there’s nothing he can realistically do against the sheer madness of Mr. Nobody.

ROUND SIX: CLAYFACE VS. MISTER FREEZE

Clayface is one of the most adaptable members of Batman’s rogues gallery, with nearly a dozen different identities and memorable stints in both Batman and Harley Quinn’s crews. He can mold himself into anyone or anything, giving him a versatility in combat that only the quickest and most improvisational of opponents can keep up with.

The thing is, though: Clayface’s abilities don’t fare too well in the cold. Notably, in the video game Batman: Arkham City, Batman uses Mr. Freeze’s own weapons against Clayface to defeat him. With his arctic arsenal, Mr. Freeze has the absolute advantage in this battle -- unless Clayface can rapidly turn into something sharp and pierce Freeze’s environmentally sealed helmet early on. But if he can’t crack that shell on his first strike, it’ll be the final curtain for our favorite actor.

ROUND SEVEN: SCARECROW VS. VICTOR ZSASZ

Unglamorous as a serial killer like Zsasz may be, this is actually a fairly even match-up. As a hardened sociopath who’s been subjected in vain to every type of therapy and treatment imaginable during his stay at Arkham Asylum, it would be quite difficult for even Scarecrow to drum up something that would strike fear into his abyssal heart.

Scarecrow, for his own part, can be surprisingly light on his feet. So I’ll allow that he can probably duck and weave his way out of the path of Zsasz’s knives for a while, but it’s possible that anything he tries to dose his pursuer with may only embolden Zsasz, if it even affects him at all. Ultimately, this match all comes down to chemistry: what happens when Scarecrow’s toxic chemicals meet Zsasz’s chemical imbalance? Personally, I believe Doctor Crane is getting more than he bargained for here… but this is truly anybody’s fight.

Oh, come now. When was the last time Star Sapphire was really considered a “villain?” I’m hearing it on good authority now that Carol actually meant to show up and ogle the entrants in the “Sexiest Man in the DC Universe” competition, but got in late and was booked for the wrong event. Though considering her history as a vessel for the Zamaronian Predator entity, I suppose she does technically qualify, so we’ll see how this plays out.

Hugo Strange is an evil mastermind, crafting biotic experiments that turn men into monsters. He’s a cunning psychologist who will cut to the heart of a person’s deepest self after only a rudimentary diagnostic. He’s a relentless physical perfectionist who has trained his own body to the peak human condition which his slight frame will allow. In the long term, he’s proven a formidable opponent to Batman in a cat-and-mouse game of wits which can go on for years at a time.

Absolutely none of this will help him against an opponent with a cosmic power ring.

Make your choices and vote now! Then discuss who you think will come out on top in our Community!