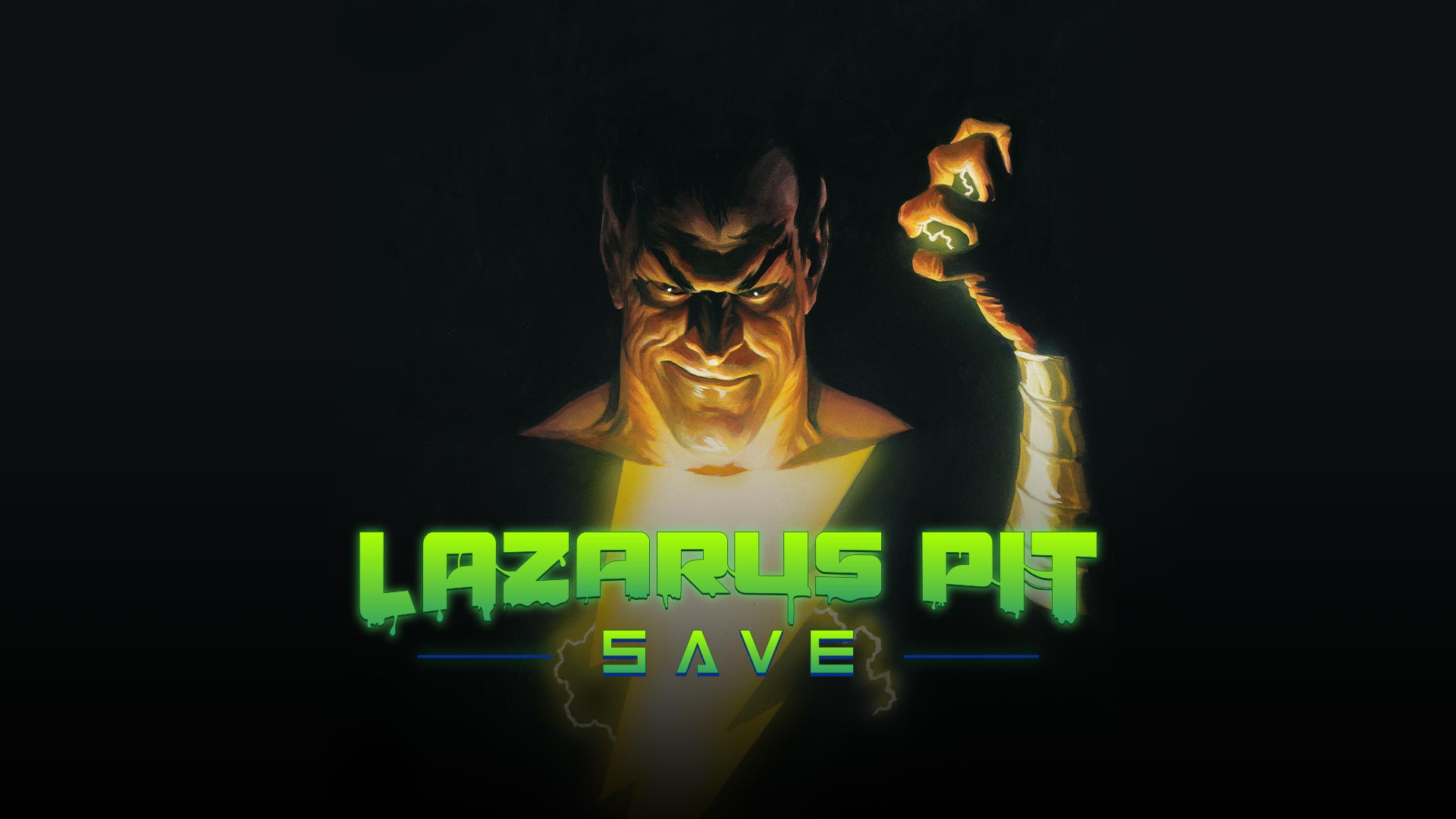 Meta Madhouse: The Darkseid Invaders' Lazarus Pit Save Has Been Activated!

DARKSEID IS… OVERTURNING YOUR VOTES! In what is without question the most shocking upset in our month long series of Meta Madhouse: Tournament of Terror battles to date, Black Adam has been given the LAZARUS PIT SAVE -- which has allowed him, despite the overwhelming will of the people, to defeat the big bad of the DC multiverse himself and heavy favorite to win it all, the Anti-Monitor. This Lazarus Pit Save was selected by Phil Morris, the voice of James Olsen in the new animated film Superman: Red Son, so you know he’s seen a thing or two through that camera lens of his… but perhaps nothing quite as fantastic as this.

But… how could such a reversal have possibly occurred? As Morris himself once said on another program: “It’s outrageous! Egregious! Preposterous!” All of the data comes out in the Anti-Monitor’s favor. The combined magic of the entire DC Universe couldn’t defeat him. Darkseid HIMSELF couldn’t defeat him. How could any mortal, no matter how mighty, possibly triumph over such an enemy on their own?

I’ll tell you: with very careful planning. The kind that only comes with divine wisdom. 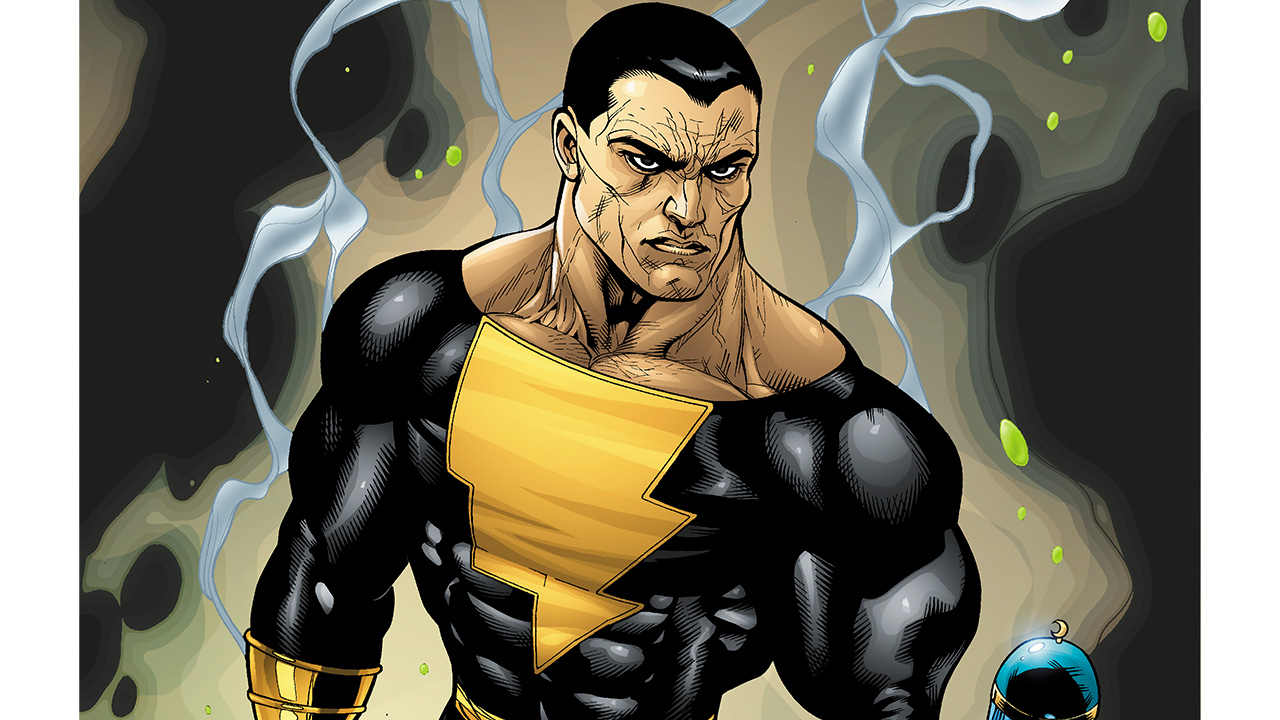 True, the Anti-Monitor is one of the most powerful beings in the entire history of comics. But while it took the entire combined forces of the universe to pull it off, he has been beaten before. Like Captain Atom or The Human Bomb, the Anti-Monitor has one great weakness: by his very nature, he’s a being of pure explosive energy kept in check by a containment suit. If that suit is pierced- a task, mind you, which even the most powerful heroes of the multiverse have failed to achieve- the Anti-Monitor will explode with a force that can destroy a universe itself. A vicious final fallout which will ensure that even if the worst occurs, the Anti-Monitor will be sure to take out whichever opponent may be bold enough to take him down.

My friends: today we have learned that Black Adam is one such opponent. And more than that, he was able to survive the Anti-Monitor’s final, omnidirectional assault. Here’s how.

Black Adam has six sources of divine power from which he draws his strength. The most important of these is the wisdom of Zehuti -- a gift which has in the past allowed Black Adam access to perfect clairvoyance, where all the events of the past, present, and future can be laid bare. Through this, it’s conceivable that Black Adam saw this very fight occurring months before it even began… and that, through an extrasensory review of Anti-Monitor’s past failures, few that they have been, he started to form a battle plan. 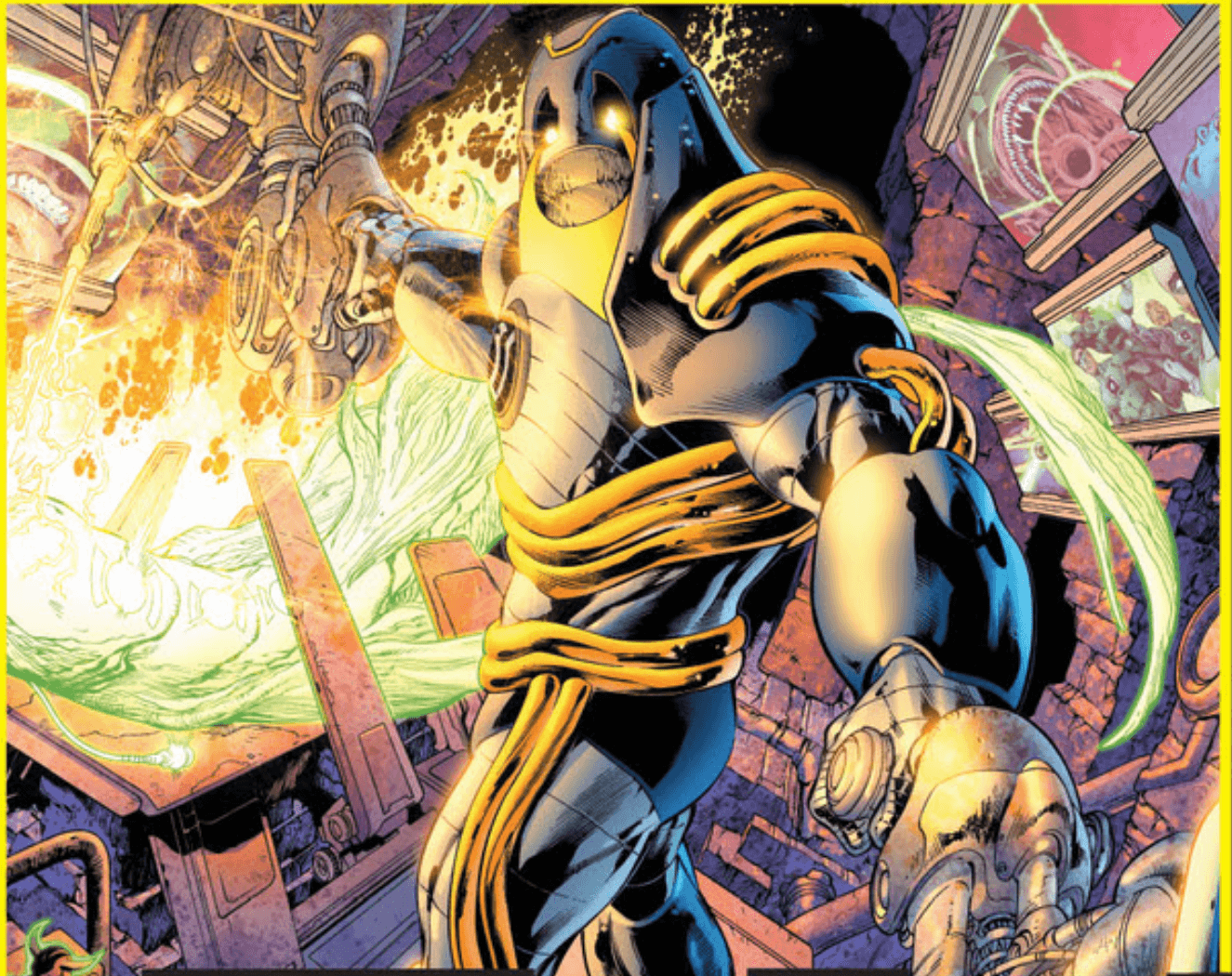 Through the wisdom of Zehuti, Black Adam would not only know that he faced the Anti-Monitor as his future opponent, but all the ways that the Anti-Monitor had been defeated in the past, and how to pierce that armor of his. In the Crisis on Infinite Earths, this was accomplished through the Omega Beams of Darkseid himself, as channeled through Superboy-Prime. Not an option here, unfortunately. But in the Sinestro Corps War, the Anti-Monitor returned to the cosmic battlefield, and his suit was punctured once more. By... what? By the power of the central power battery of the Sinestro Corps. By the power of the cosmic entity of fear which inhabited it.

By the Anti-Monitor’s previous opponent in the first round of this Darkseid Invaders bracket. By Parallax.

What a coincidence, right? Imagine, Black Adam taking on the Anti-Monitor right after the very entity which once managed to puncture his armor! But Black Adam is a man of supreme cunning, and one who makes his own luck. In The Joker Maniacs bracket, we have already been able to determine that The Joker had a say over the initial seeding. How else would Poison Ivy end up having to battle both Kite-Man and Harley Quinn in succession? It stands to reason, then, that Darkseid himself must have had some say with how the bracketing of this quarter played out. 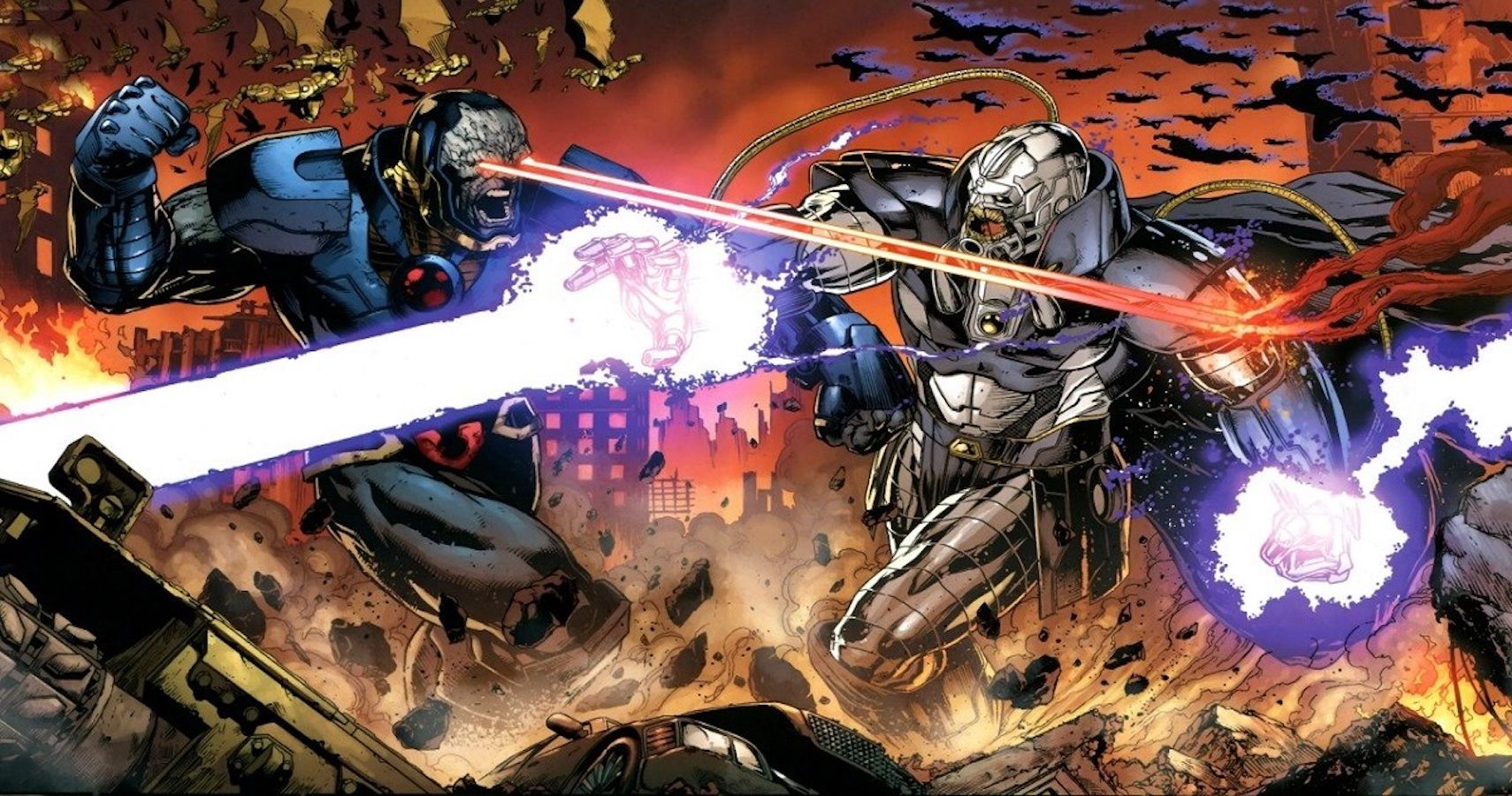 Once again, through the wisdom of Zehuti, Black Adam must have divined the truth about his bracket leader. One we as comic readers learned during the great “Darkseid War”… that more than anyone else in the universe, the almighty Darkseid LOATHES the Anti-Monitor’s antimatter guts. The only reason Darkseid could have deigned to include him on his team would be to watch him fail. So when Black Adam came to his coach with the plan, Darkseid must have been open to his devilish scheme.

First, The Anti-Monitor would battle Parallax. A predictable enough battle where the ultimate power in the multiverse dominates a merely cosmic one. But enough, perhaps, to create fissures of fear within the Anti-Monitor’s thick carapace. Fissures which a skillfully enough wielded Sinestro Corps ring might just be able to pry open further.

Hey: guess what Sinestro, a close and personal friend of Black Adam, gave to him as a gift in 2015? 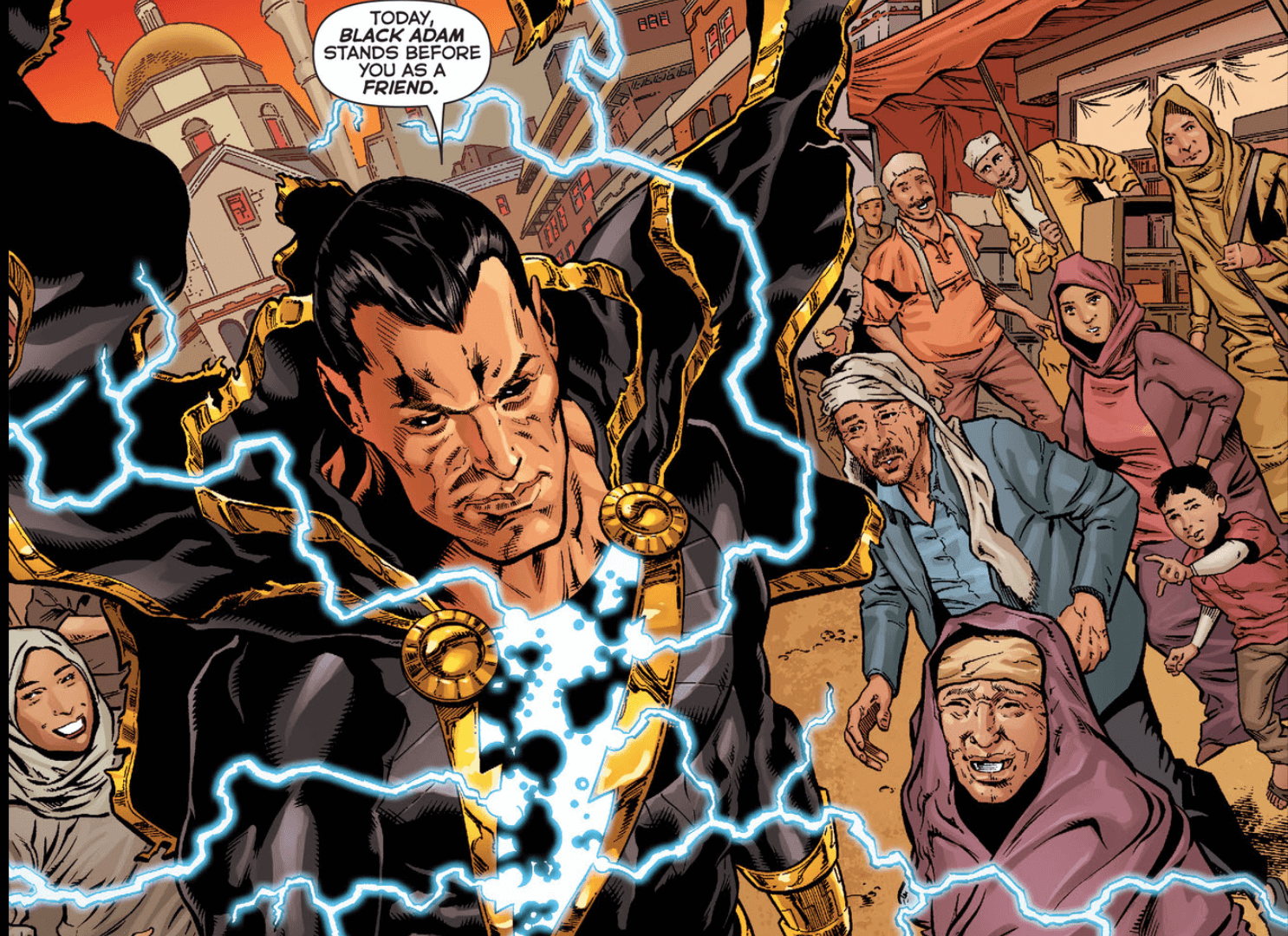 Wielding Sinestro’s might, as amplified by the magical power of Aton, Black Adam could exacerbate the Parallax-delivered damage done to his impossibly powerful foe, splitting that otherwise impenetrable husk apart. A risk? Most certainly. But the wisdom of Zehuti would guide his hand. And after all: a Lazarus Pit Save ensures that risky, one-in-a-million shots can pay off big.

And then, with the rupture of the Anti-Monitor’s containment suit, comes the boom… which Black Adam may swiftly sidestep. For you see, in addition to a nearly bottomless reserve of magic power, the power of Aton ALSO allows Black Adam to instantly teleport to the Rock of Eternity, a mystical location between dimensions, whenever he chooses. Sure, an entire universe may be obliterated in the fallout. But Black Adam will remain to claim his victory.

AND THAT. IS WHY. You do NOT mess. With Dwayne. The Rock. Johnson.

[EDITOR’S NOTE: At this point, the author of this article dropped a microphone on the ground and walked out of the room without looking back.]

Which one of Darkseid's Invaders would you have given the Lazarus Pit Save to? Talk about it in our Community!