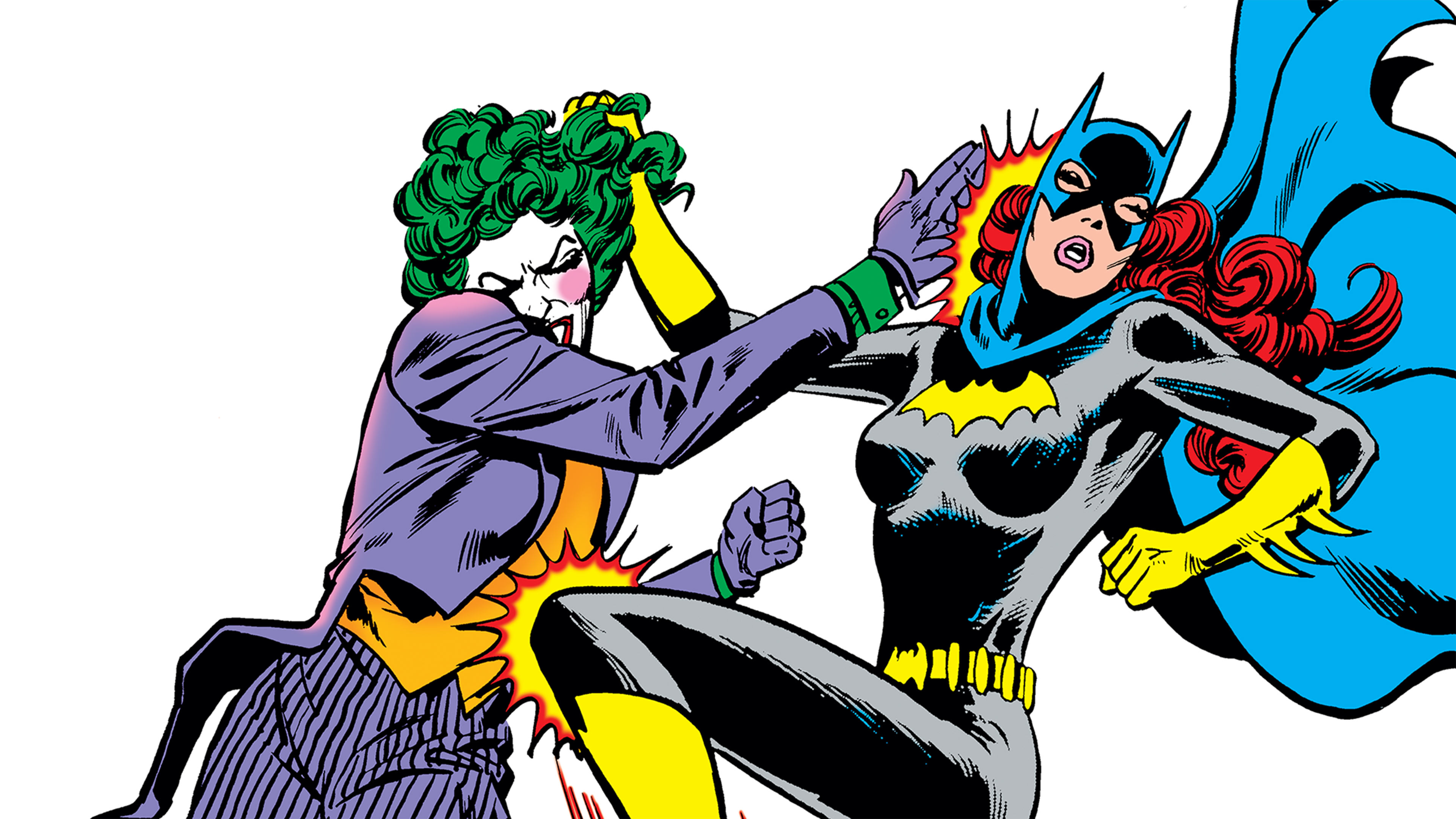 We’re all having a bit of Harley Quinn fever over here at DC Universe, thanks to the hype from the Lady of Lunacy’s new DC Universe animated series. While Harleen Quinzel may be one of a kind, did you know she wasn’t the DC Universe’s first Clown Princess? Years before Harley had her first therapy session with Mistah J, Duela Dent was fighting crime alongside the Teen Titans as Harlequin! Here’s another crazy thing about Harlequin – she wasn’t the Joker’s girlfriend, she was his daughter. Well, she sort of was. It was a complicated mystery that became a long-running joke in the DC Universe. Let’s start from the beginning… 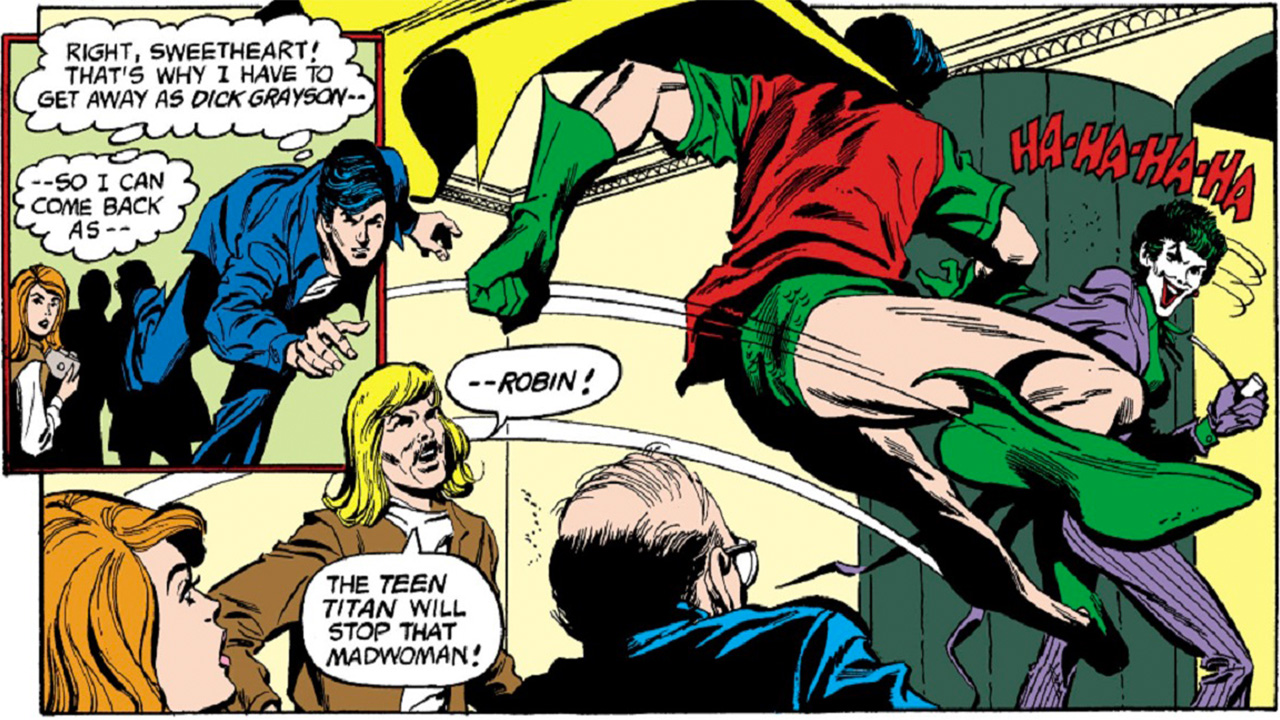 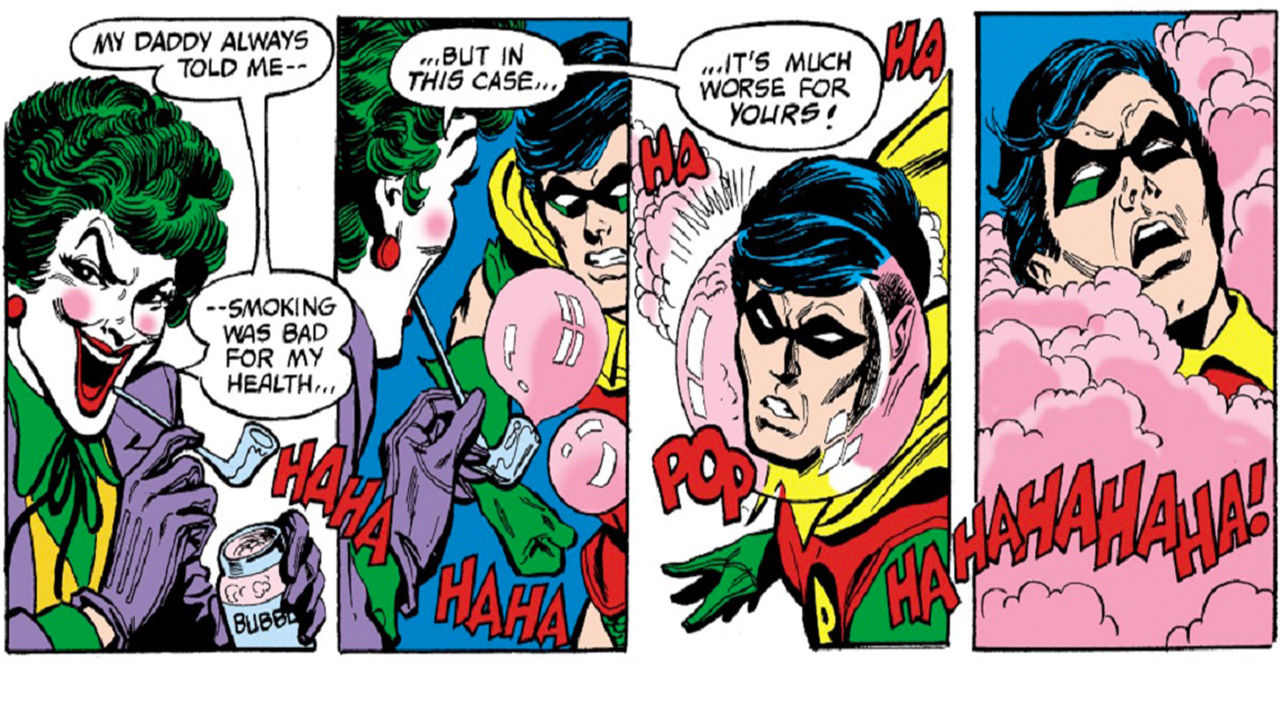 Readers were first introduced to Duela in Batman Family #6 when she appeared at a Hudson University event and took credit for stealing a missing manuscript. She called herself the Joker’s Daughter, and as you can see above, she looks like a female cosplayer who pulled off a perfect Bronze Age Joker look. Not bad, Duela!

Throughout this issue's story, she was able to keep Robin on his feet. She defeated him with bubble gum in their first encounter, and in their second fight she used a lipstick weapon that threw kisses at the Boy Wonder. Come on Dick, you were trained by Batman! This is just embarrassing. 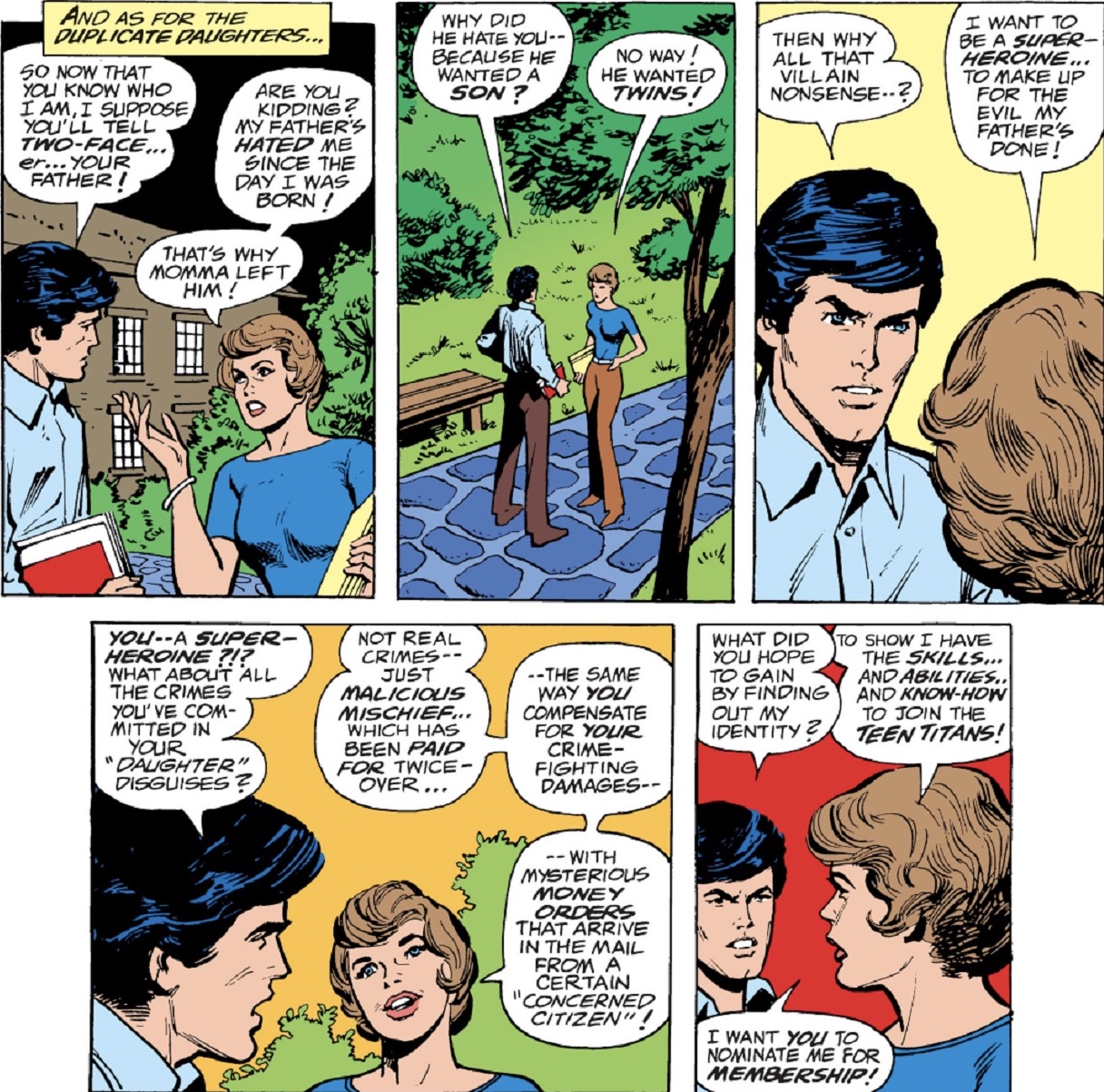 Like any good cosplayer, Duela switched things up when she appeared again in Batman Family #8-9. Here, she caused mischief and mayhem as Scarecrow’s Daughter, Penguin’s Daughter, Riddler’s Daughter and Catgirl. Take a look at these issues, because her costumes are guaranteed to bring a smile to your face. Especially her take on a female Penguin.

By the end of Batman Family #9, Duela had discovered Robin’s secret identity, and he deduced hers as well. Dick told the Joker’s Daughter that he used his detective skills to learn that she was really Duela Dent, the daughter of Two-Face. Writer Bob Rozakis reasoned that since Two-Face was the only married Batman villain he was the natural choice. We can infer from that logic that none of Batman’s villains believed in premarital sex – at least in the Bronze Age.

By now you may be thinking, “How can Two-Face have a daughter Dick’s age? The timeline doesn’t add up.” If so, congratulations, you’re a better detective than Robin! Don’t worry, this will be addressed later.

Duela told Dick that her flashy crimes were really just acts of mischief to get his attention so he would nominate her for membership in the Teen Titans. Duela’s line of thinking was a bit nutty, but Robin went along with it and introduced her to the team in 1977’s Teen Titans #46. We’ve included the relevant panels because they’re just so weird. Robin tells a horrible joke, which allows Duela to make an awkward entrance, loudly laughing. What can we say? It worked, and Duela was allowed to join the Teen Titans.

This was years before Terra joined and betrayed the team (in the classic “Judas Contract” story) and the Titans didn’t really vet their members back then. If you had a costume you were allowed to join. The only person who objected to Duela’s presence was Speedy, who brought up some concerns about her criminal past, and how she was literally dressed like Gotham’s biggest serial killer. 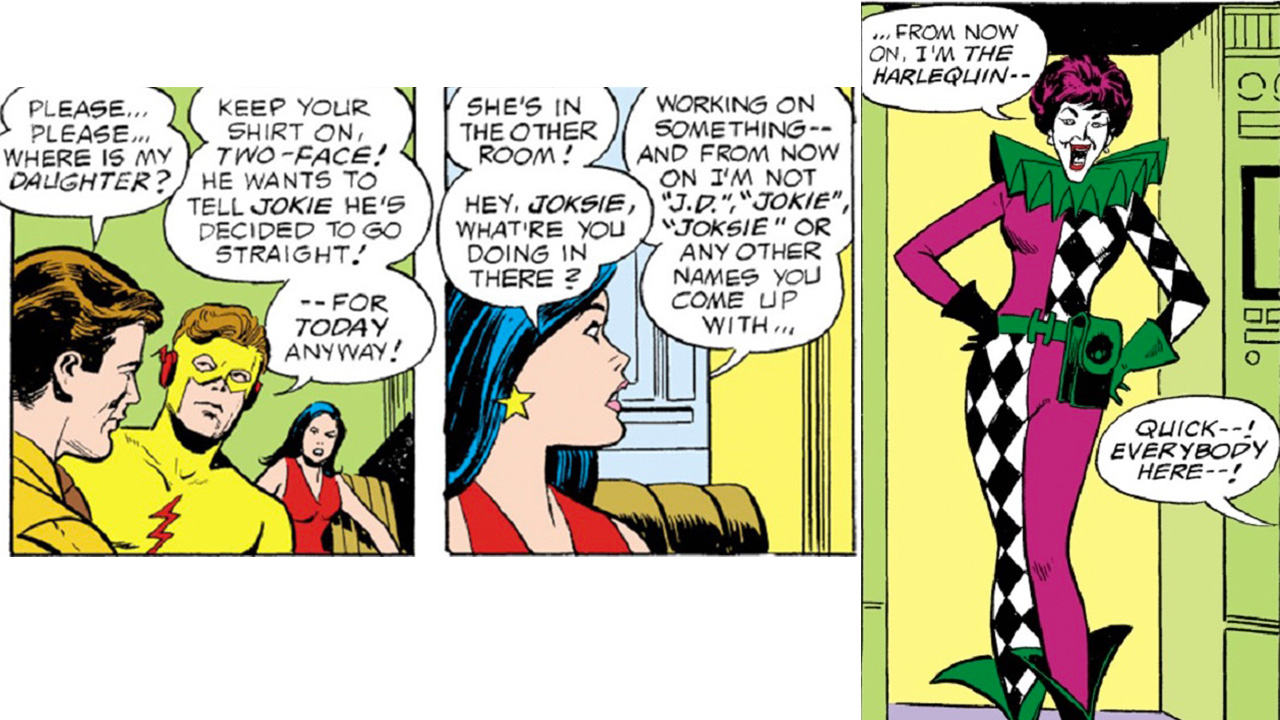 Part of that problem was solved at the end of 1977’s Teen Titans #48, when Duela adopted a new costume and a new identity – the Harlequin! She never said “Puddin” or “Mistah Jay” like the Harley we know today, but she fought alongside the Teen Titans decades before Harleen picked up her first mallet. Harlequin's Titans days turned out to be short-lived, however, for the group broke up a few issues after she unveiled her new look. Was it something she said?

Duela continued fighting crime with Dick in Gotham, unveiling yet ANOTHER IDENTITY at the end of Detective Comics #483, when she revealed herself as the Card Queen. Great Caesar’s Ghost, Duela, can't you keep a settle on something for more than a few months?

After her only adventure as Card Queen, Duela disappeared for a while and wasn’t invited to join the Titans when they reformed in the Wolfman/Perez run. In Tales of the Teen Titans #50, Dick ran into her at Donna Troy’s wedding and said he recently realized she’s too old to be Two-Face’s daughter. Duela rightfully made fun of Dick for this, reminding him that he was trained by the World’s Greatest Detective. The former Harlequin was coy with Dick when he asked who her father really was, which began a running joke about the mystery of Duela’s lineage. 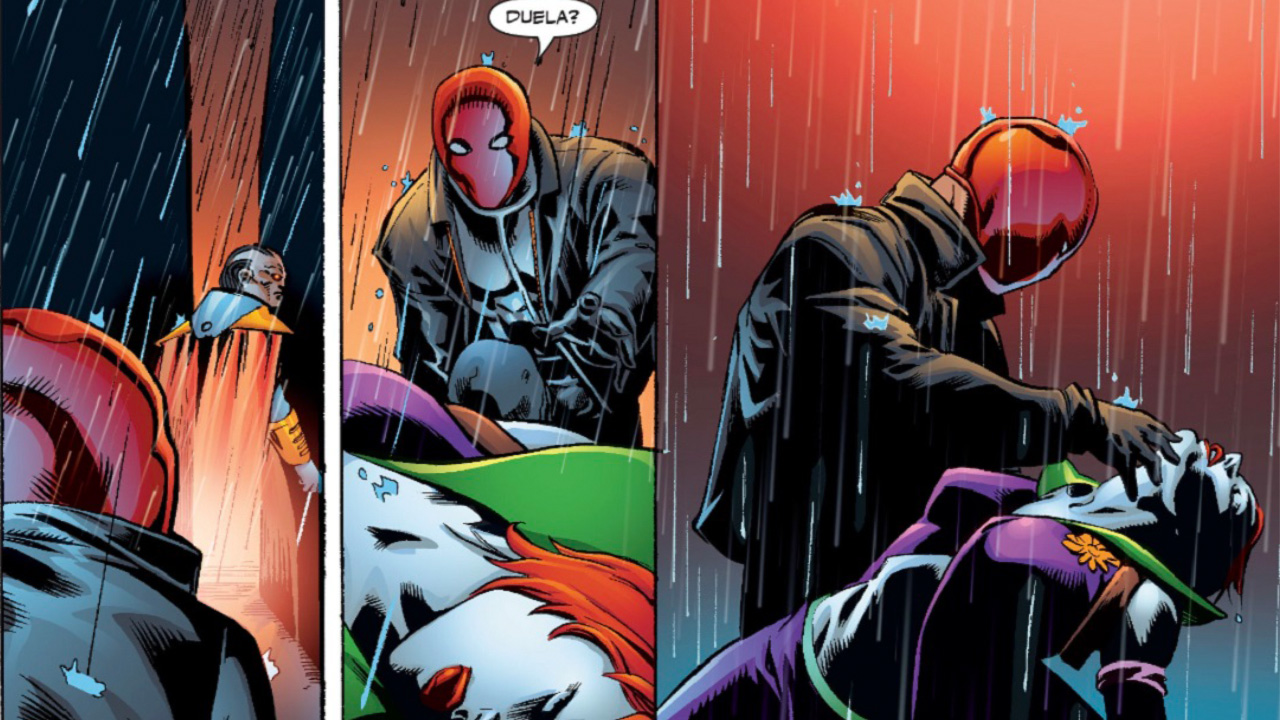 Duela appeared infrequently after that, sometimes working with the Titans (as she did in JLA/Titans), and sometimes fighting them (as she did as part of Deathstroke’s Titans East in 2007’s Teen Titans #43). She teased the mystery of her parentage once more when she claimed to be Doomsday’s Daughter. Sadly, Duela was killed by the Monitor in Countdown #51, before the mystery of her identity could be solved. In The Search for Ray Palmer: The Crime Society #1 it was revealed that her father was a hero from Earth-3 named the Jokester, and her mother a woman named Evelyn Dent. Technically she was the Joker’s daughter all along, so we can assume she was telling the truth the first time.

Although the original Duela is now dead, a new version was introduced in 2013’s Catwoman #23. Maybe Harlequin will one day meet Harley Quinn and the duo can embark on their own series of looney adventures. After all, one good clown deserves another.

Would you like to see Duela Dent make a comeback? Let us know in our Community!