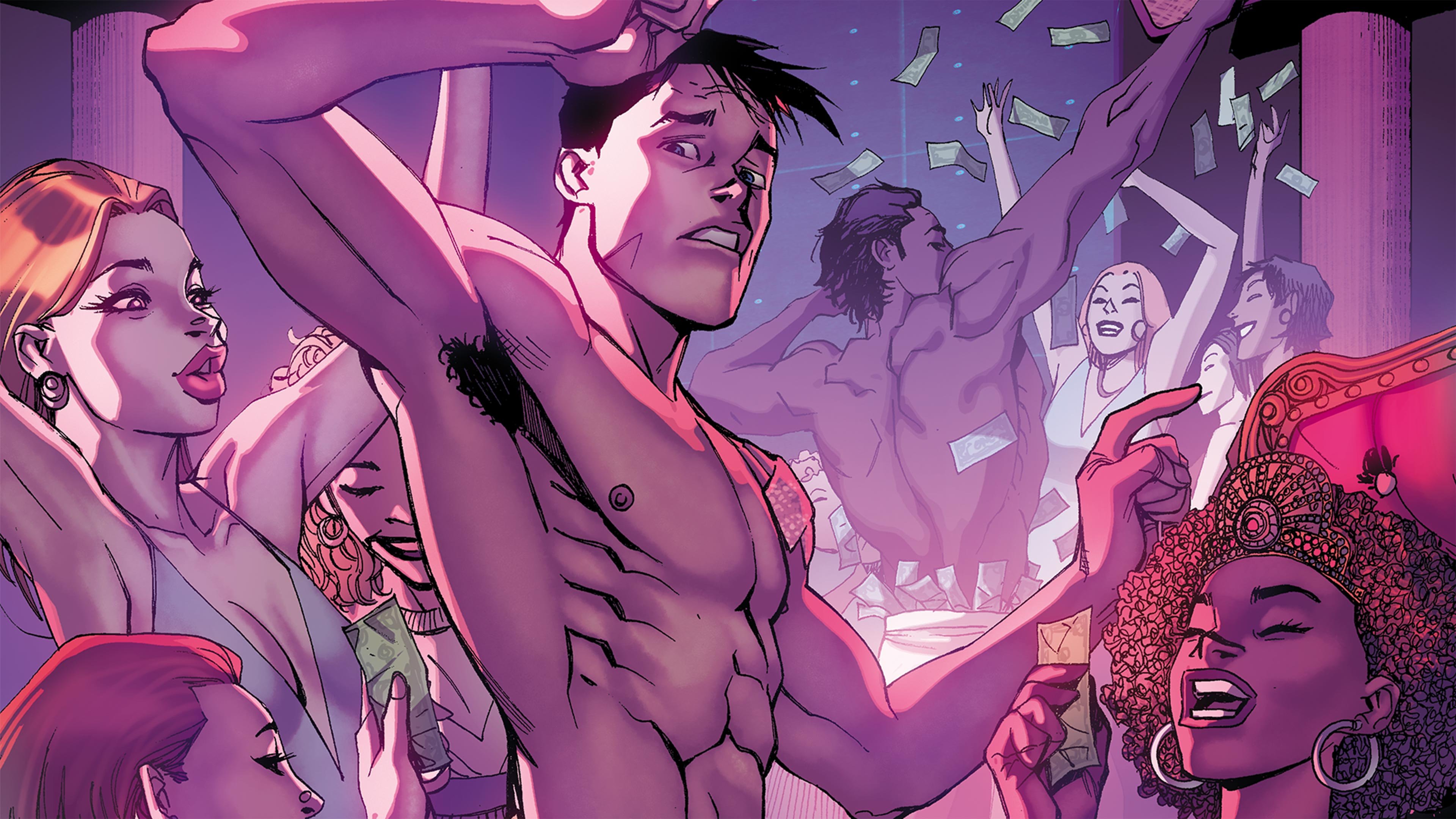 When you’re writing a resume, a lot of employers suggest that you keep all your information condensed to a single page. But if you happen to be Dick Grayson, the first Boy Wonder, that’s easier said than done. As the adopted ward to one of the richest men on Earth, it’s a little crazy that Dick even NEEDS employment. But a look through his history reveals that Dick doesn’t just actively seek a job: he’s seeking ALL of them. Here’s a rundown of the occupations held by one Richard Grayson on the rare occasions he isn’t fighting crime. 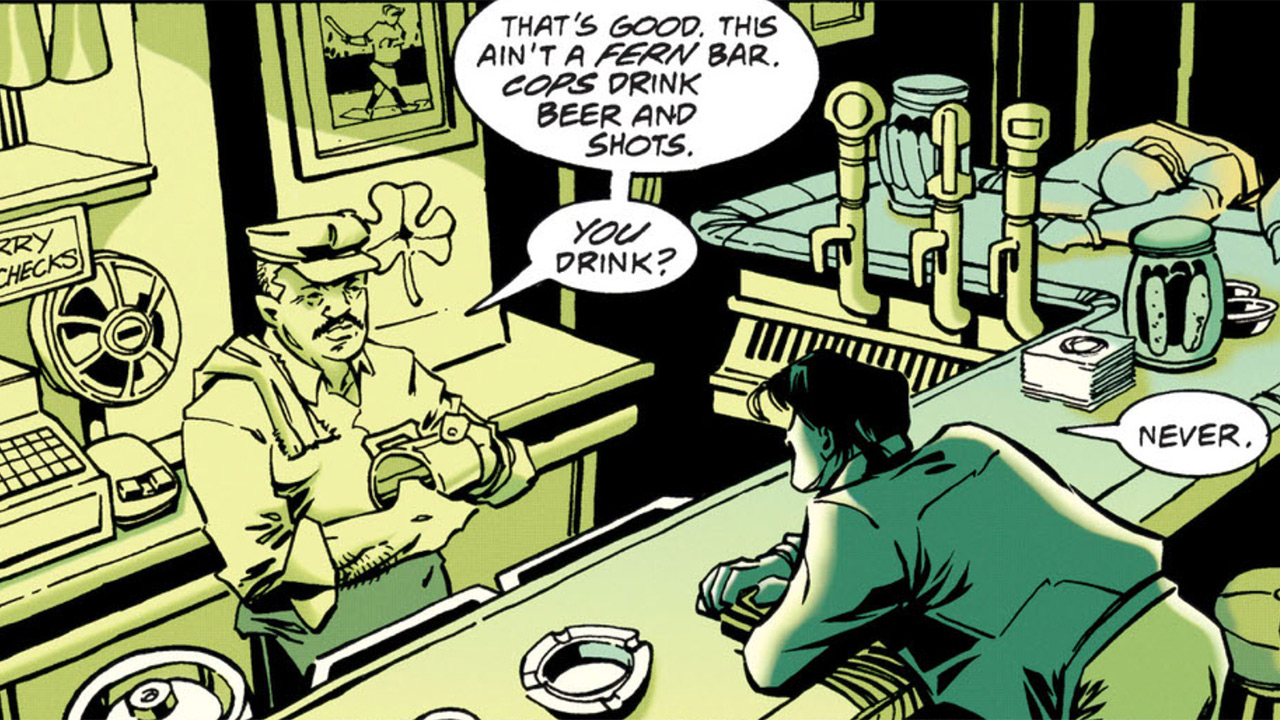 When a Super Hero chooses a profession, it helps to have one that keeps them close to the action. Superman, for instance, became a reporter, so he could be aware of the news as it breaks. Wonder Woman became a military officer, so she could be on the scene when there was a battle to be won. Batman became a CEO, so he could have all the resources he needs with little oversight from the government and could take long, unexplained absences. When Dick Grayson began his solo crime fighting career in Blüdhaven, he found another way into the scene: serving drinks at a cop bar, where he could overhear chatter and pursue leads on his own. His cover for why such a smart guy was serving drinks to cops? He was actually an aspiring writer, doing research for a book. Yeah, sure, Dick. We’ve all got the great American novel tucked away in our head somewhere. 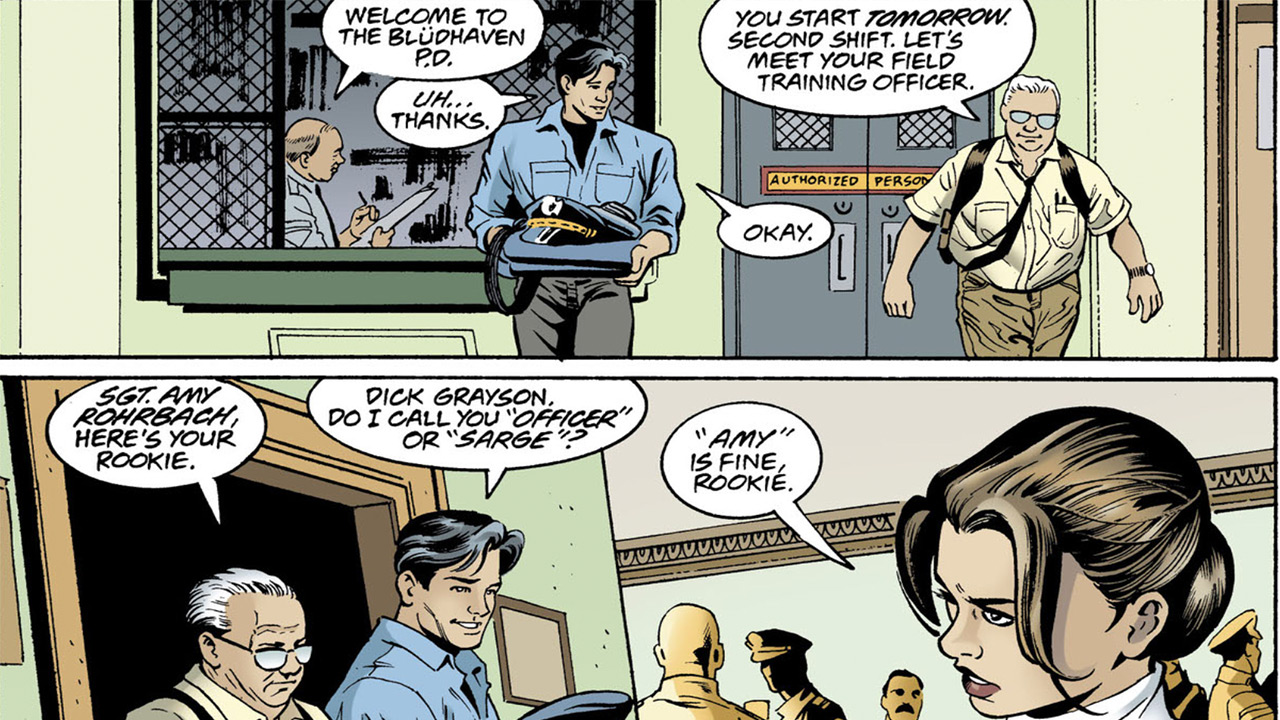 Eventually, serving drinks to police officers wasn’t enough for Dick Grayson. He needed to put on the badge for himself. Fortunately, his law degree from Hudson University prepared him for this change in profession, and he was soon deep enough inside the BPD to discover exactly how deep their corruption went. Titans fans will know we find Dick at a similar place of his life in Detroit, as the series begins. 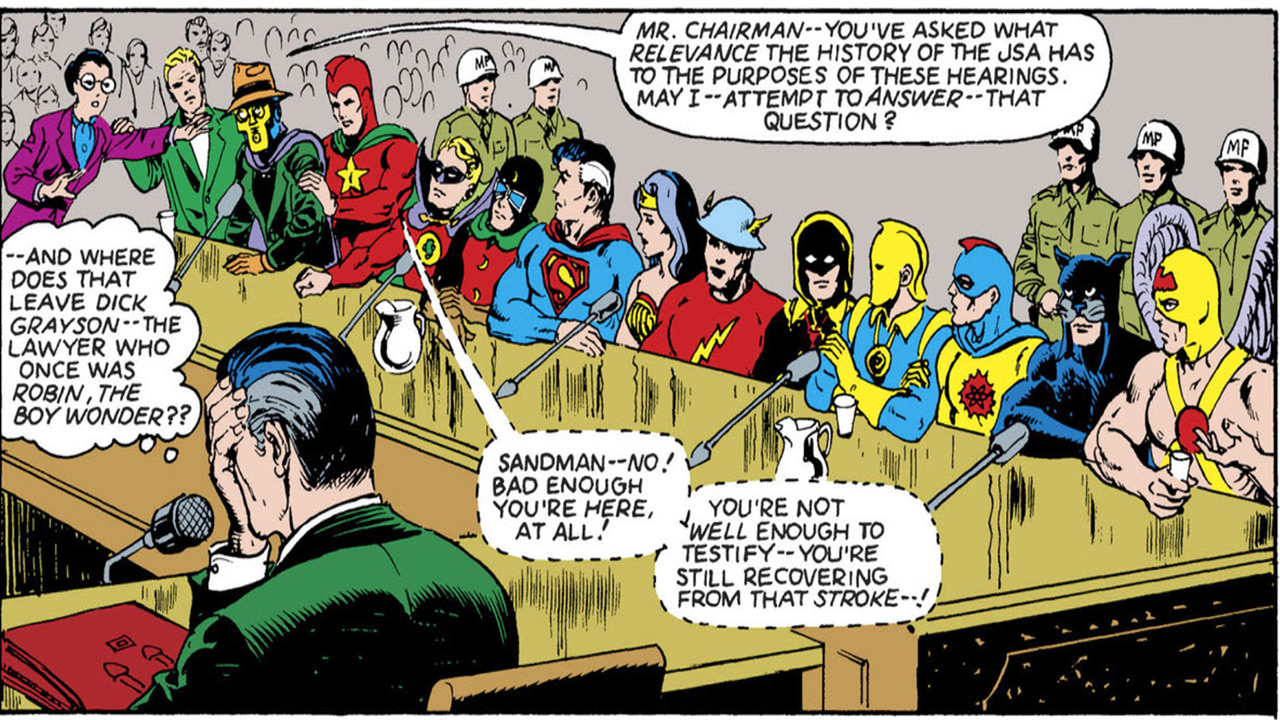 Meanwhile, on Earth-Two, Dick Grayson uses that law degree for a much different career path: a lawyer for a consumer research firm in which he was a name partner, Cranston & Grayson — a position he eventually left to become the US Ambassador to South Africa. His vacancy at Cranston & Grayson was filled by Bruce’s own daughter, Helena Wayne. 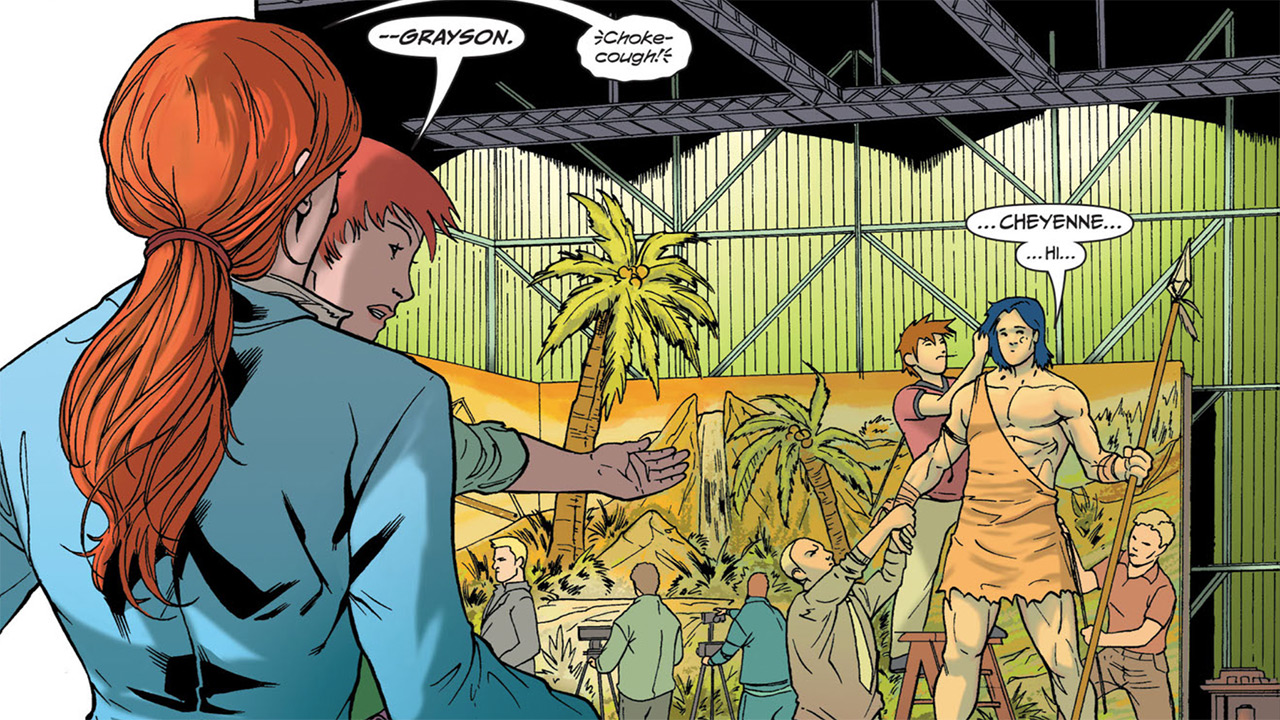 After nearly dying in Infinite Crisis, Dick left Blüdhaven for a year to travel the world as he retraced Batman’s roots and retrained in crime fighting. (And also, abandoned his engagement with Barbara Gordon. Real slick there, ace.) When he returned, it was time to start his life over from scratch. After all, there are few jobs that will let you take a year long sabbatical so you can learn to kick better. Plus, the city happened to be a little… you know… nuked. And so, Dick left the irradiated wasteland of Blüdhaven behind, and set up shop in New York City. Fortunately, when you’ve got a face and physique like Nightwing, it’s easy to find work in the Fashion Capital of America. Dick accidentally falls quite spectacularly, for a time, into a career as a glamorous fashion model — but when they ask him to put on a Nightwing-inspired costume for a Super Hero themed fashion event, it’s a bridge too far for Grayson. It’s often a mistake to mix business and pleasure. 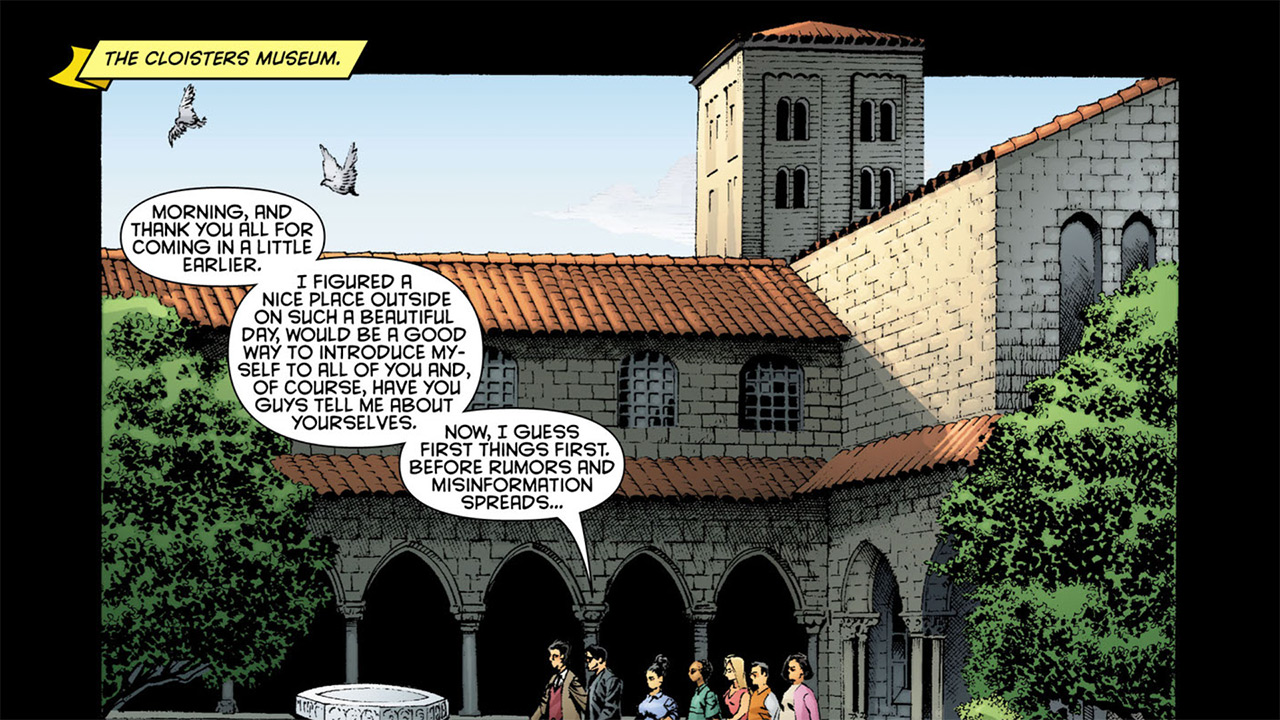 Self-exiled from the fashion world, Dick sought a new job that would feed nicely into his vigilante habit… which he found upon discovery of a convenient network of caves that ran beneath The Cloisters, a very posh art museum. Dick used his detective skills (or, if you prefer, “cheated”) to nail a museum curator position interview, and there he remained until it was time to be Batman for a bit. (“Batman” isn’t on this list, because it isn’t a job. It’s a CALLING.) 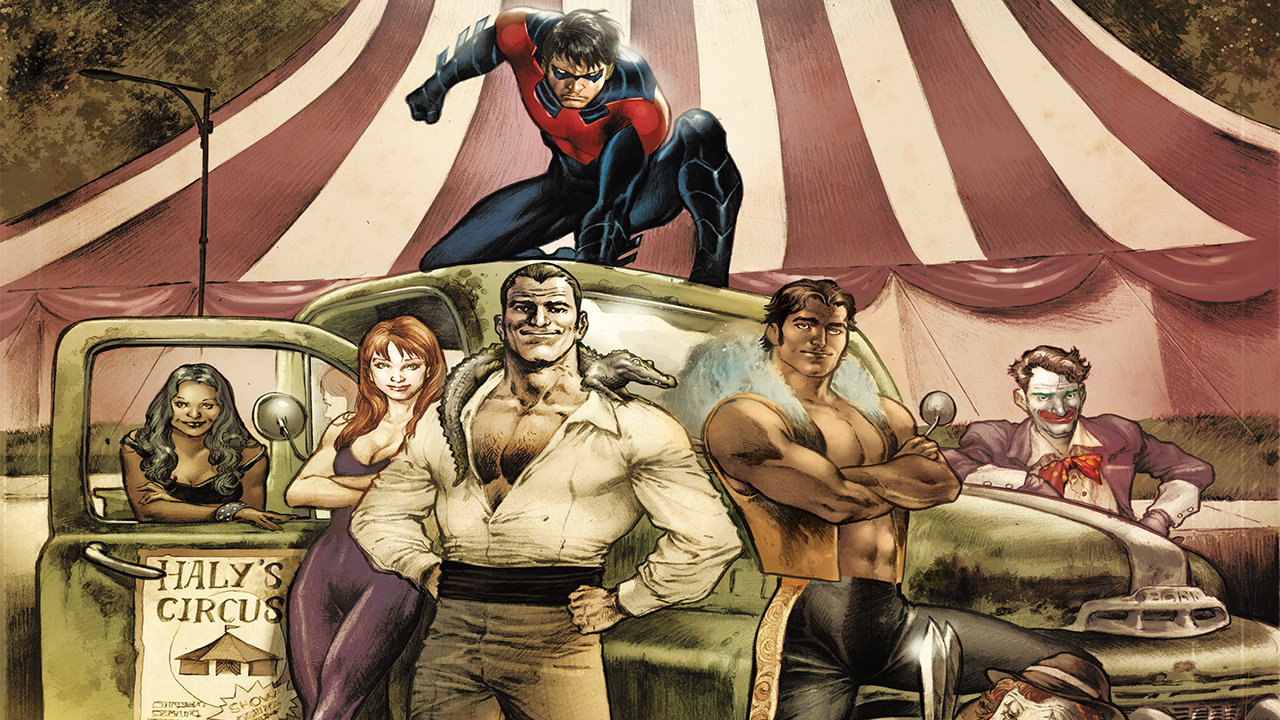 The first job Dick Grayson had, before he even met Bruce Wayne, was as part of the “Flying Graysons” acrobat act at Haly’s Circus. Bruce took him in after the tragic murder of Dick’s parents, but Haly’s was always his first home. Anonymous donations from Bruce kept the circus running long past profitability for years, but eventually it came time to close up shop. Rather than see the circus folk whom he thought of as family have to hang up their clown shoes, Dick leveraged some of his own trust fund to become a part-owner in Haly’s Circus, and maintained a hand in managing it for quite some time. It’s never been a big money making operation, but it is a labor of love. 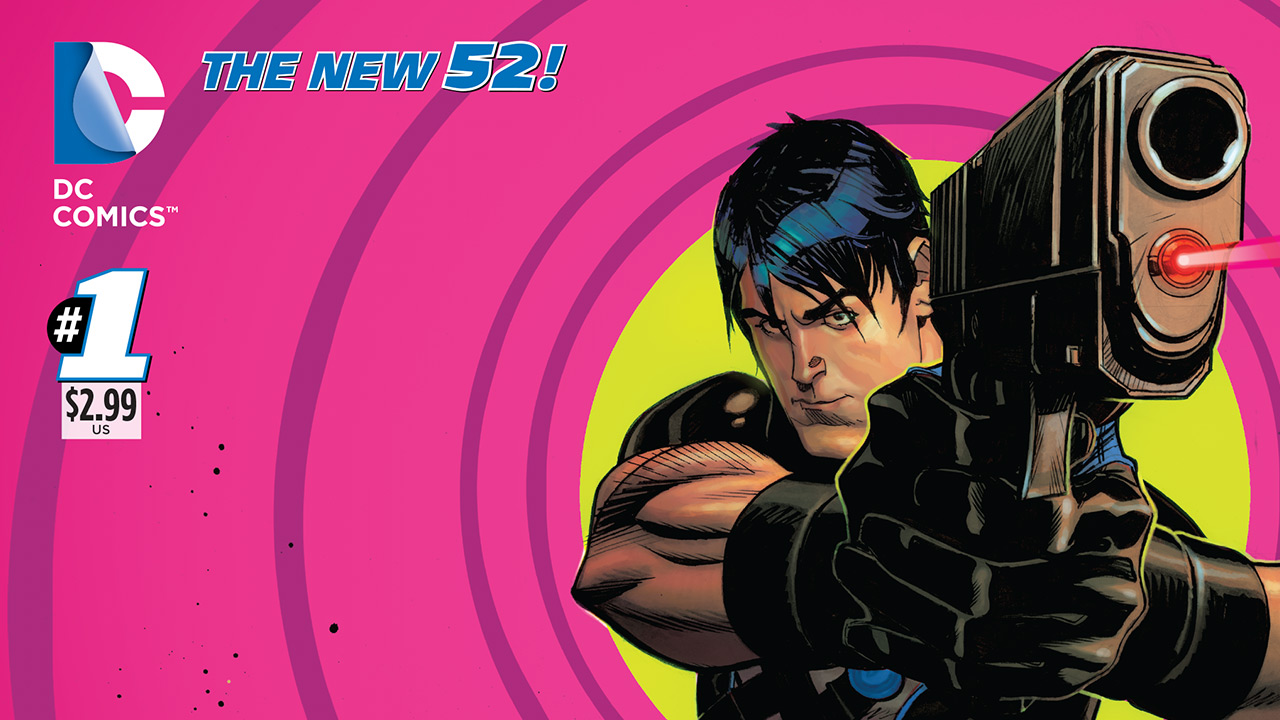 At the climax of Forever Evil, Dick Grayson died. For, like, 7 seconds. But as far as the world was concerned, he was gone. Now, for most job applications, “Deceased” isn’t what you’d call a selling point. But it is one if you’re applying to go undercover as a secret agent of Spyral, a United Kingdom-based super spy organization involved in regulating metahuman affairs. Dick spent his time as “Agent 37” doubling as a deep cover mole for Batman, which made things super awkward for him when Bruce himself went off the grid right in the middle of their mission after a battle with The Joker in “Batman: Endgame.” Thanks a lot, Dad. 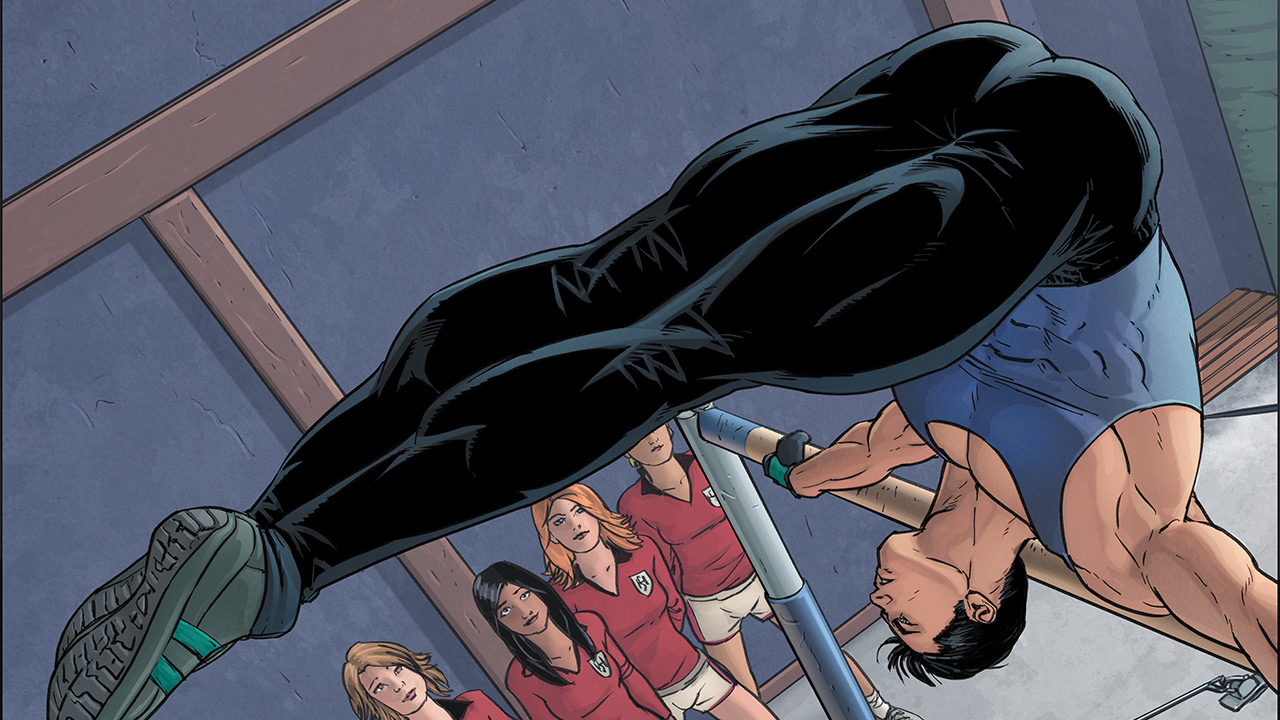 Spyral wasn’t just a spy organization, mind you: it was also, on its surface, St. Hadrian’s Finishing School for Girls, where many of the agents were employed with cover identities as staff. Dick Grayson in particular took on the role of a gym teacher- and crush object of an entire class of hormonal young girls. Fortunately, when those girls are being secretly trained as super spies themselves, it can be an asset to call upon a gaggle of devoted fans. 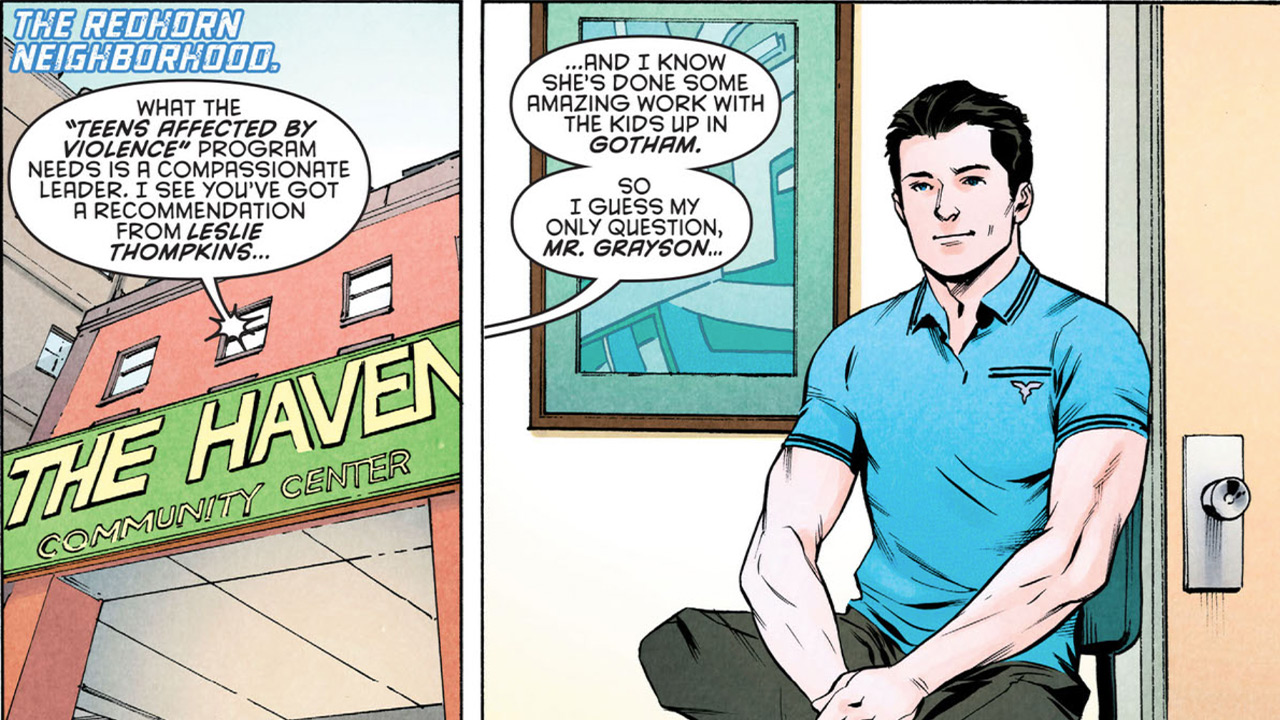 Once it was time to leave Spyral, Dick decided he didn’t just want to spend his time punishing villains: that’s not what he was in this for. What Dick’s always really wanted is to help people. And so, Dick Grayson moved back to Blüdhaven- no longer nuked, thanks to a couple of continuity reboots- to become a social worker. But because he’s Dick Grayson, this noble endeavor only ends up getting a lot more people in trouble when he comes to realize that the people his office caters to are, themselves, recovering Super Villains and henchmen. When you’re the main character of a comic book, trouble does tend to find you. 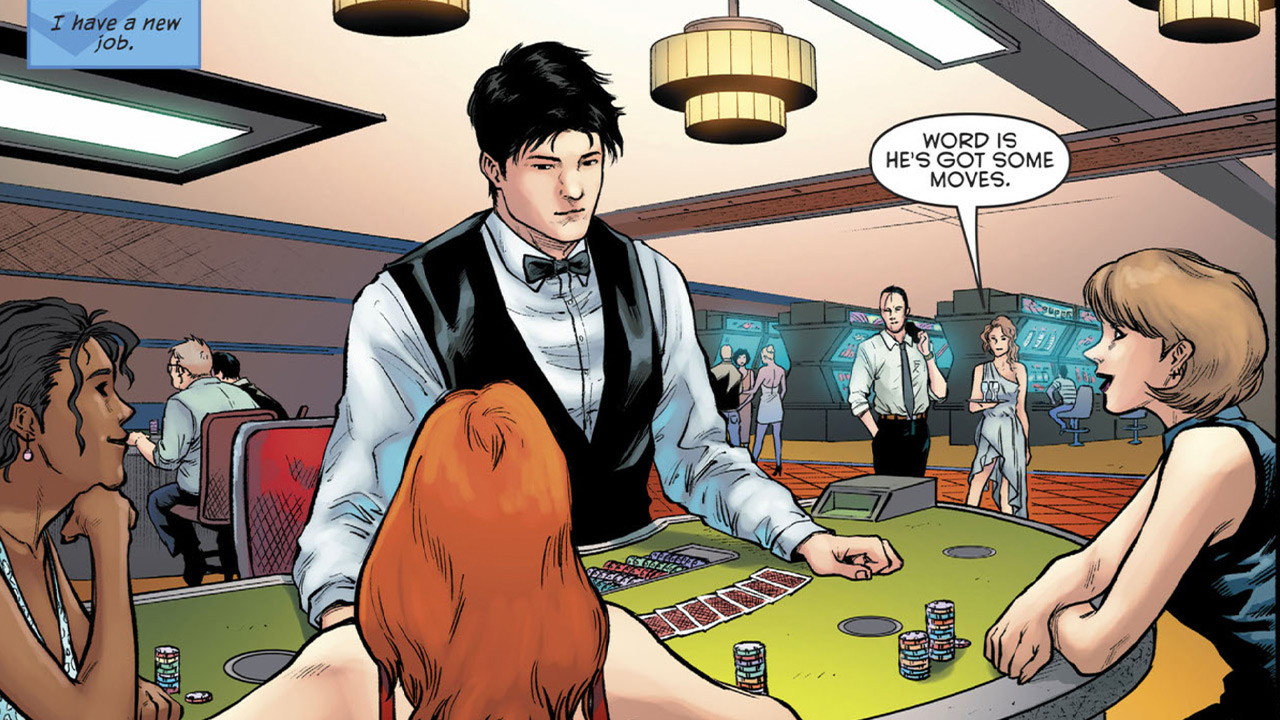 Leaving his recovering villains behind, Dick takes on a much seedier gig with one of his active arch-enemies, Blockbuster — using his Spyral experience of getting right under his enemy’s nose to find out what they’re really up to. As the casino kingpin of Blüdhaven, Blockbuster ran the legal vice trade in the city, and was gearing up to run the illegal parts too. By running the tables at Blockbuster’s resorts, Dick was able to stay close to the action and take his enemy down when the time came. Well, they say the house always wins… unless their opponent happens to be Nightwing. 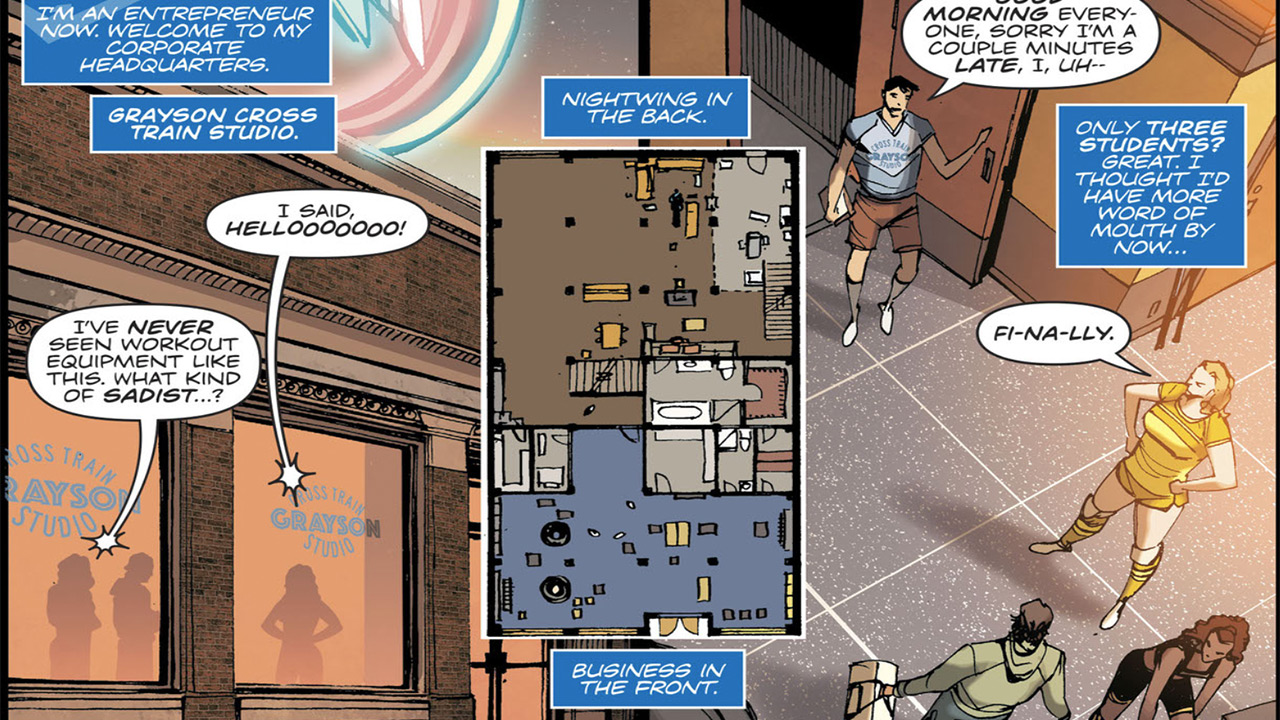 As a natural born leader with the Titans, not to mention an experienced gym teacher at St. Hadrian’s, Dick took up a new job bossing people around as a personal trainer in his own gym. Maybe not the best way to stay close to the crime fighting action, but it’s at least a perfectly good reason to stay in tip-top shape. That’s a physique without any secrets. 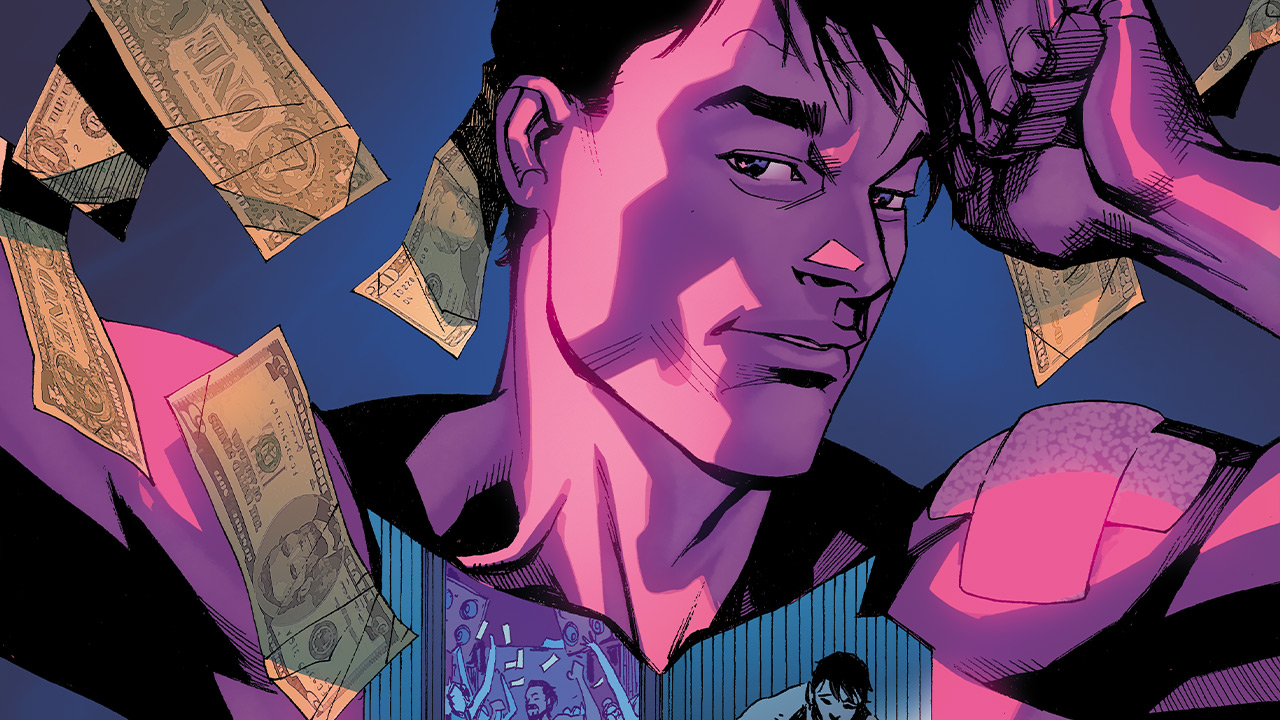 Okay, come on now, it was one night. ONE night. This BARELY counts. Still, though… we suppose we’re obligated to tell you about the time one of Dick’s gym clients told him about a gig he could fill in for, which he took, because he “needed the money.” Needed the money? Richard John Grayson, you are the adopted son of a BILLIONAIRE. Just be honest with yourself and live your truth! You just wanted to dance, and you loved it. Doesn’t that just feel so much better to admit out loud? You don’t have to spend all your time in a mask. 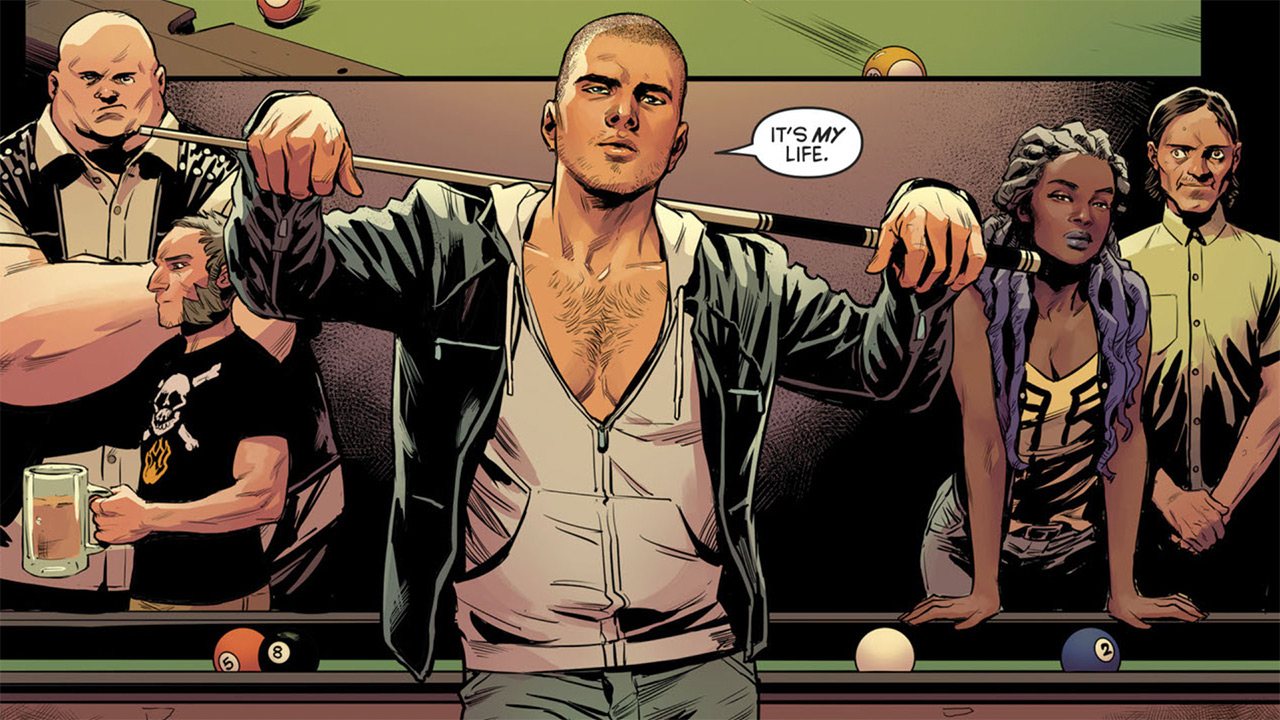 Then there were some other jobs, but those were held by “Ric” Grayson, Dick’s alter ego formed after he was shot in the head by KGBeast and lost all memory of his past. But come on, Sexiest Man Alive body aside, that’s barely the same guy. We can only imagine that once Dick wakes out of his year-long fugue state, he’ll be hitting the old employment trail one more time. Some people just can’t stay away from the hunt.

What's your favorite Dick Grayson day job? Talk about it in our Community!