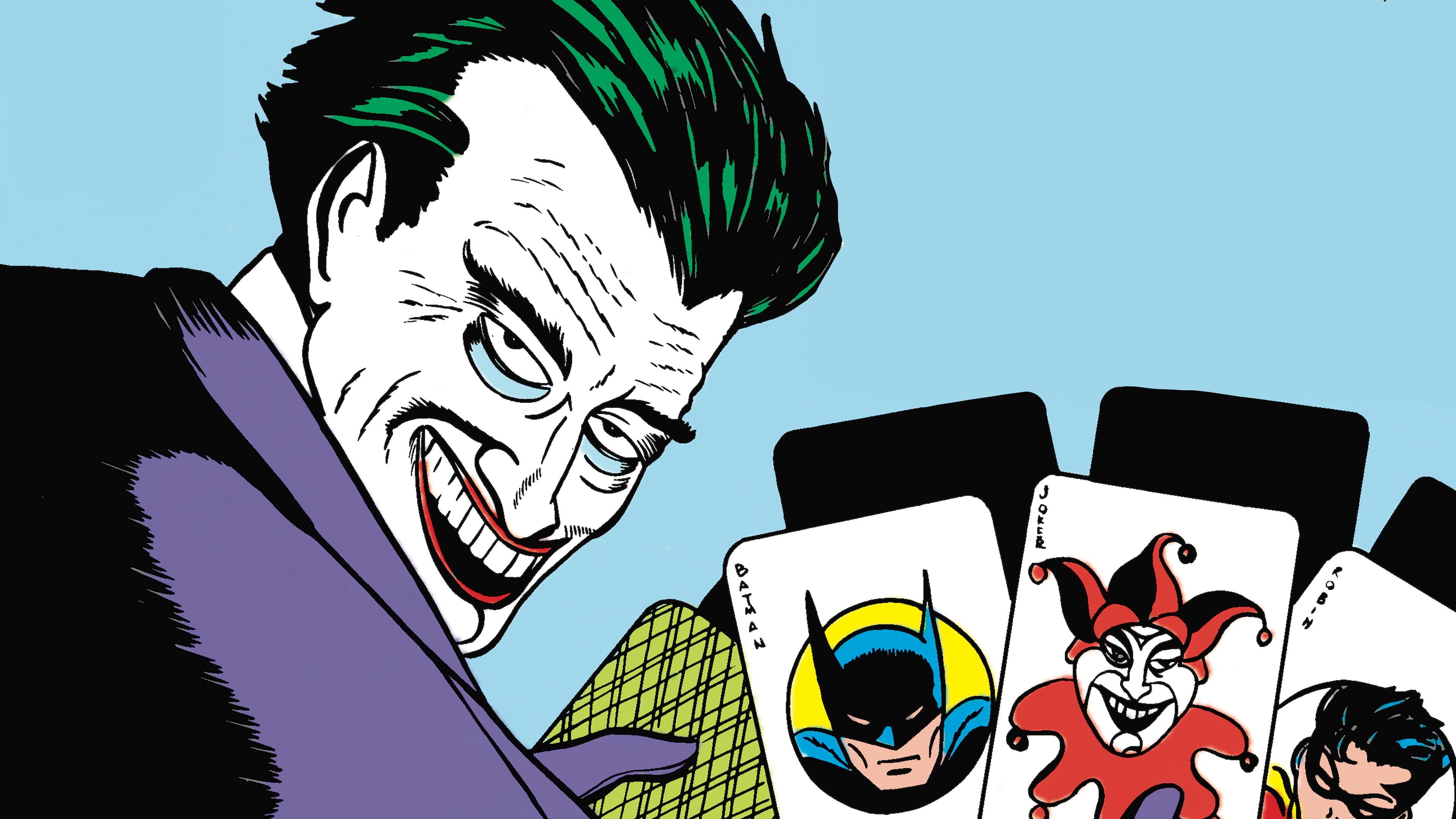 The Many Faces of the Joker: Golden Age Beginnings

The Joker has battled Batman in many iconic stories since his fearsome first appearance in 1940. Sometimes he’s portrayed as a calm and collected genius, and sometimes he’s a total lunatic. Either way, he’s never predictable and he always keeps the Dark Knight on his toes. This week another incarnation of the Joker will be brought to life on the big screen, as Joaquin Phoenix plays the Harlequin of Hate in director Todd Philips' ‘Joker.’ In honor of Mr. J, we’ll be spending the week examining his history -- from his original debut to his latest manifestation. Today, we’re starting in the Golden Age of Comics, with the first incarnation of the Clown Prince of Crime... 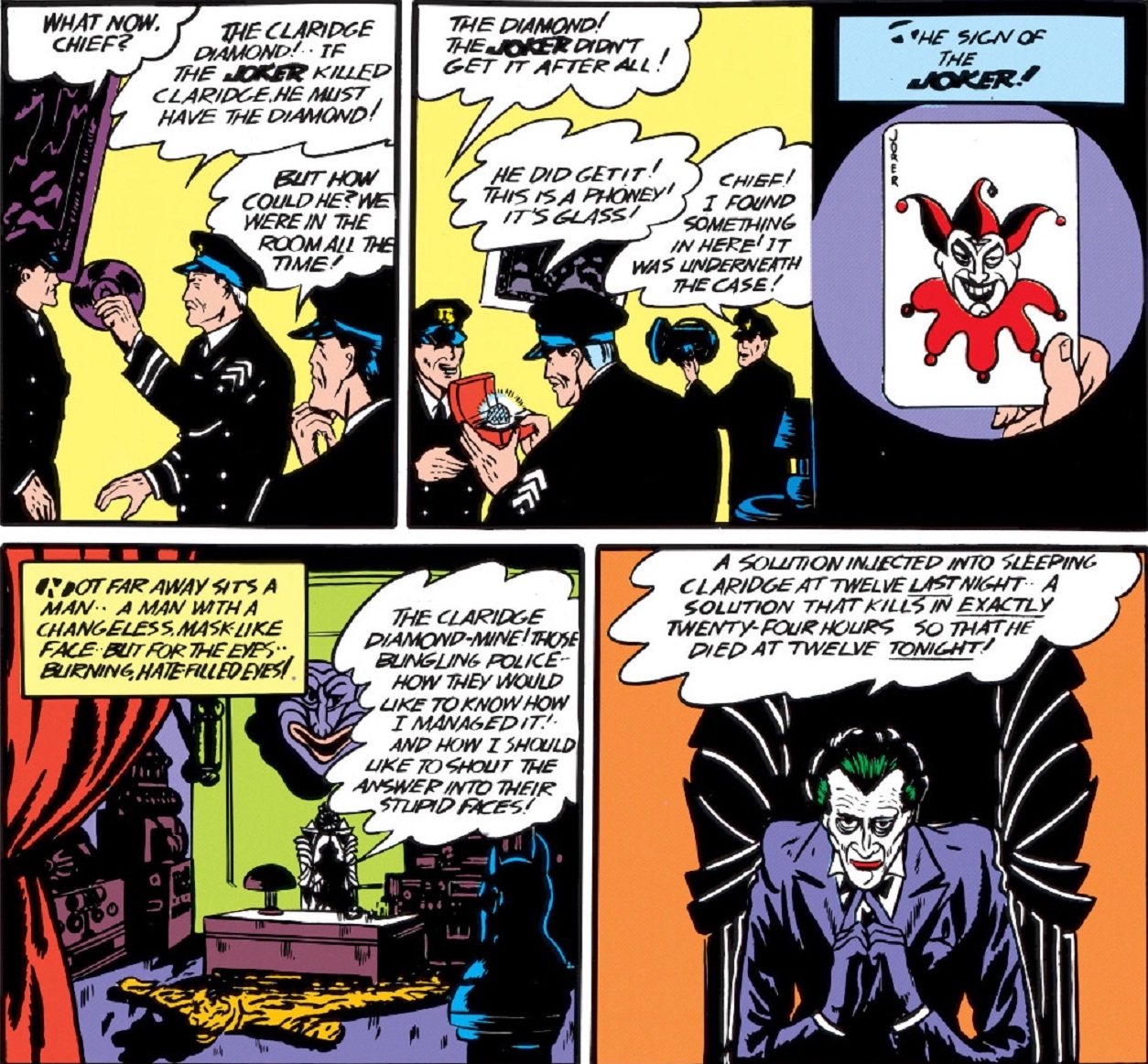 Artist Bob Kane, writer Bill Finger, and inker Jerry Robinson modeled the Clown Prince's appearance after actor Conrad Veidt’s chilling smile in the 1928 film ‘The Man Who Laughs.’ The Joker first appeared in 1940’s ‘Batman’ #1, where he announced his robberies ahead of time via radio broadcast. Despite the advance warning, the Joker was constantly able to outwit the police and pull off his crimes without being caught. This version of the Joker killed his robbery victims just because he could. A sadist from the start. 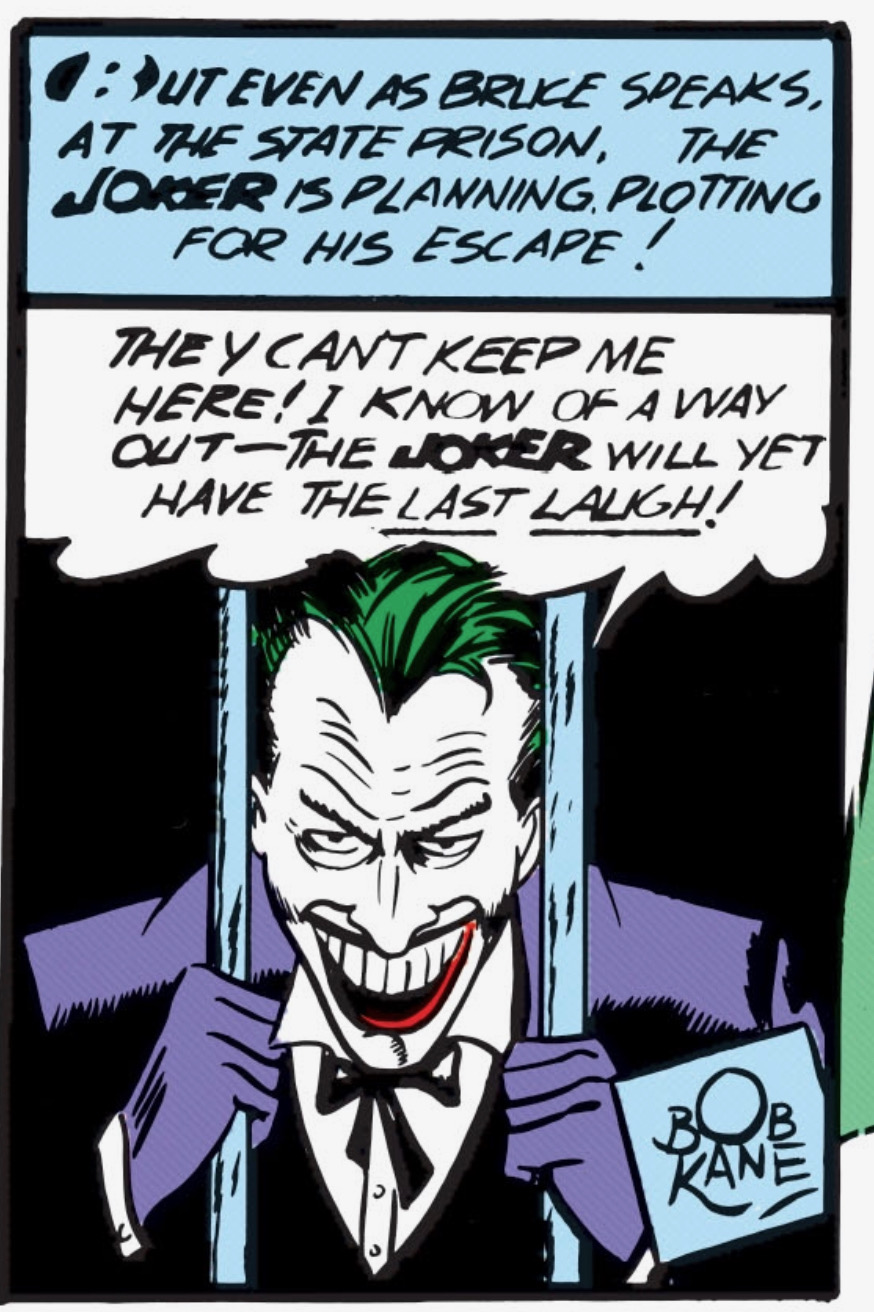 Although he carried a gun and knife, the Joker's favorite weapon was his Joker Venom, which caused his victims to die with a chilling smile on their faces. If you look at the illustrations from Bob Kane and Jerry Robinson, you’ll notice the Joker’s look is largely unchanged since 1940. While there have been alternate versions of the Joker’s appearance over the years, his original look remains the most iconic, showing that his creators got it right the first time.

After apprehending Joker, Batman tangled with the Clown Prince when he returned in the last of the four stories of 1940’s ‘Batman’ #1 (which also introduced Catwoman). Lots of people forget that somewhere in the Joker’s insane mind, he's a brilliant chemist. He created the Joker Venom after all! Using his scientific mind, the Joker mixed chemicals hidden inside his teeth and used them to cause an explosion and escape prison. This began a tradition of creative Joker getaways.

Interestingly enough, the Joker’s second story was almost his final curtain. The tale ended with the Clown Prince accidentally stabbing himself in the chest, and Batman leaving the scene assuming his foe is dead. If writer Bill Finger had his way, that would have been the end of it. After all, it wasn’t uncommon for the villains to die in Batman’s earliest stories, and for a moment it looked like the Joker would share this fate. 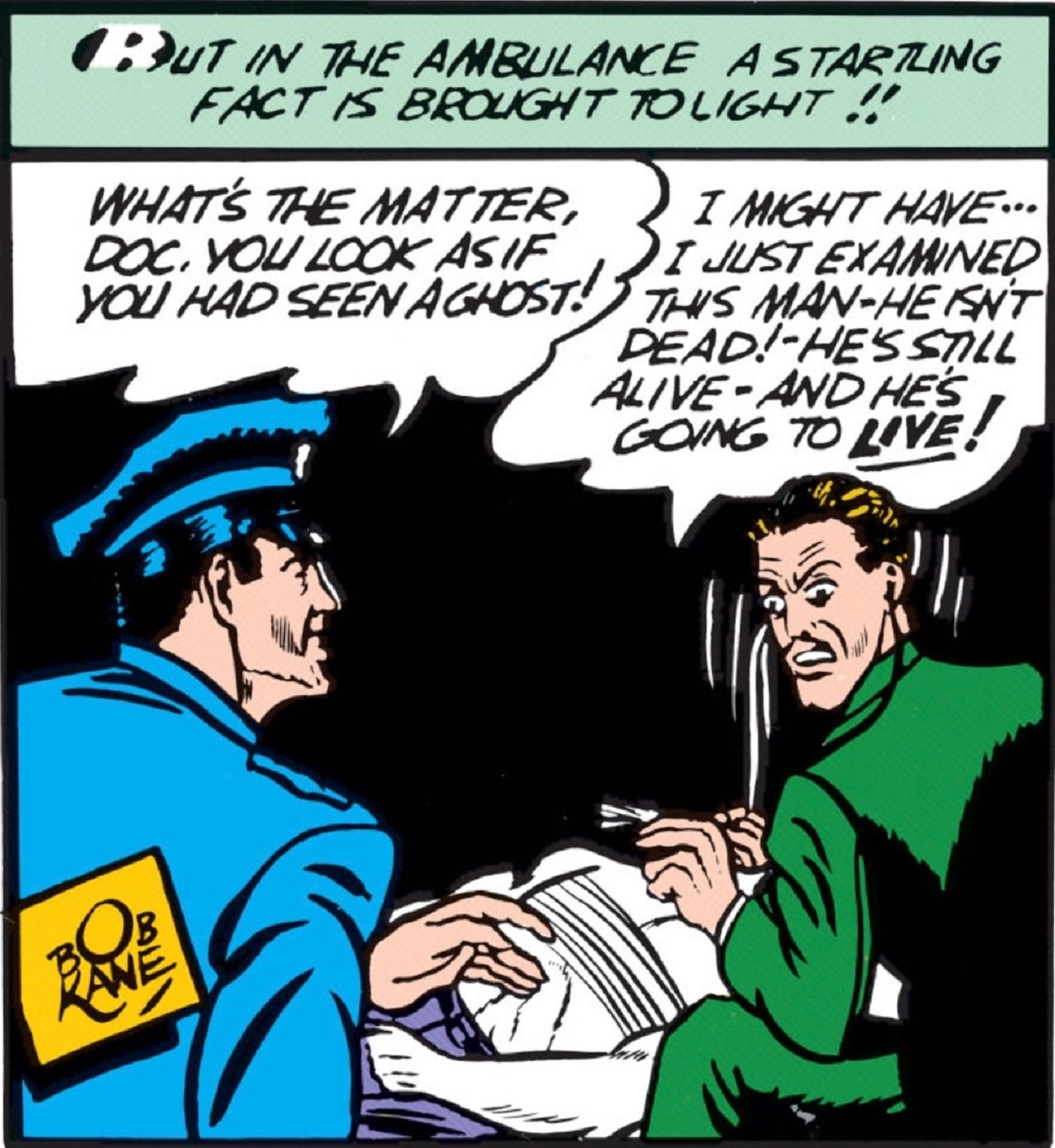 Whitney Ellsworth, the editor of ‘Batman’ at the time, saw potential in the Joker and had the last panel of the story modified to let readers know the villain had survived. If Ellsworth hadn’t intervened, consider how differently the Batman mythos would have been! We certainly wouldn’t be seeing a 'Joker' movie this Friday...

Some corners of fandom have debated if the Joker is redeemable, and interestingly enough the Dark Knight himself tried to redeem the remorseless killer in a few of his earliest stories. 1940’s ‘Batman’ #2, for example, begins with the Caped Crusader concocting a plan to steal the Joker from the hospital and taking him to a brain surgeon who he hopes can scramble the Clown Prince’s mind until he becomes a normal citizen. From a 2019 perspective, the plan seems unethical, but the Golden Age Batman played by his own rules. 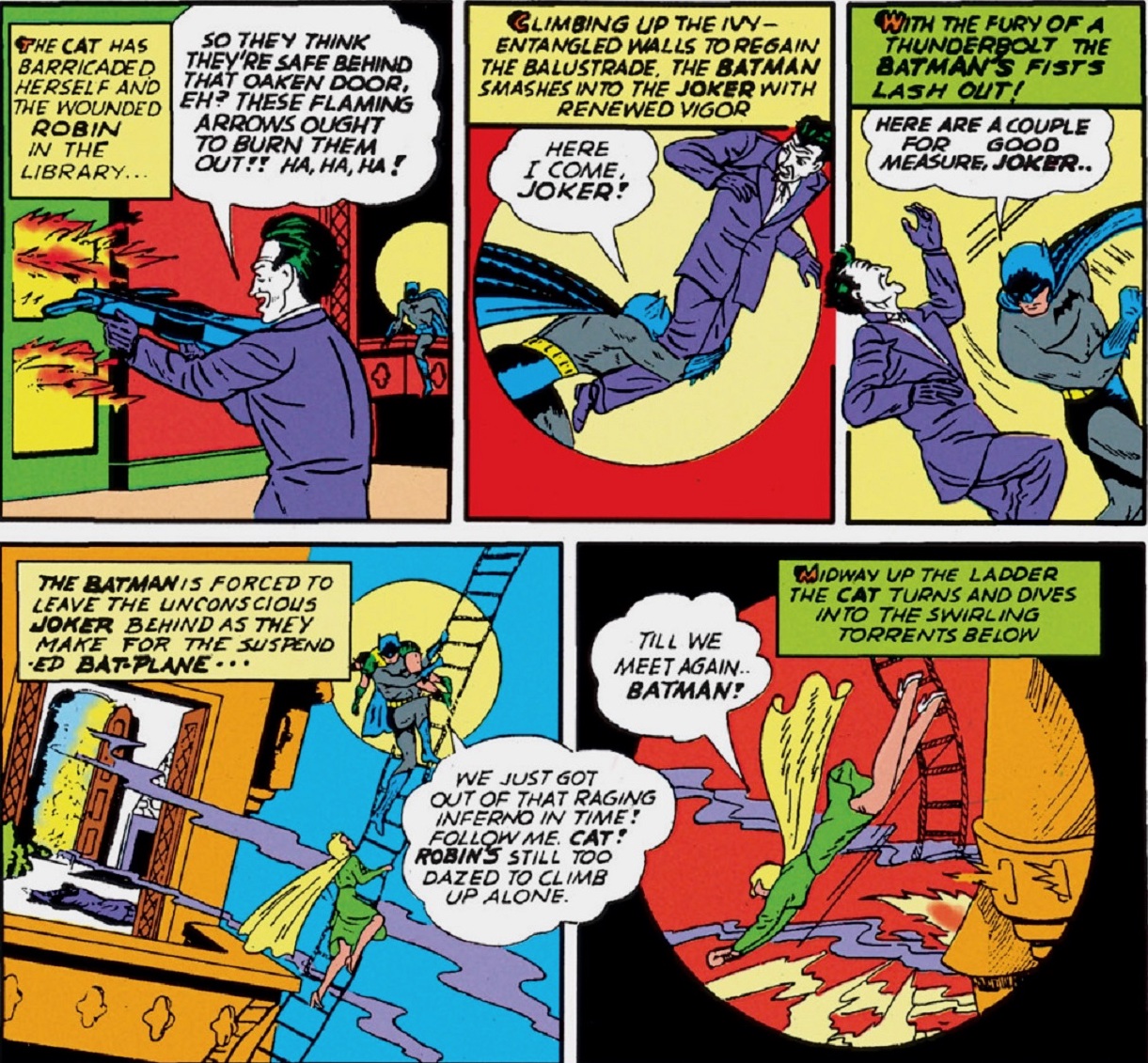 Batman’s body heist fails because the Joker’s men get to him first. The rest of the story is notable because not only does it contain the Joker’s first meeting with Catwoman (technically the first super-villain team-up), but the end of the story starts the tradition of ambiguous Joker deaths. As the story closes, the Joker is knocked unconscious inside of a burning building, and the tale ends without a confirmation of his survival. This would later become a staple of Joker stories, with the Clown Prince disappearing in water or flames and the Dark Knight unsure if his foe survived or not.

The Joker continued to bedevil the Dynamic Duo throughout the 1940s, and always found creative ways to murder his victims. In 1942’s ‘Detective Comics’ #62, the Joker killed a bunch of comedians hoping he’d be able to grab an inheritance. The murder, pictured above, is important for two reasons: it shows that Joker was a menacing clown with red balloons decades before Pennywise stepped onto the scene, and it’s the last murder the Joker would commit for over 30 years! The Joker remained a dark and menacing presence, but comics headed in a more family friendly direction, which made Gotham City’s citizens a bit safer -- at least until the Bronze Age. 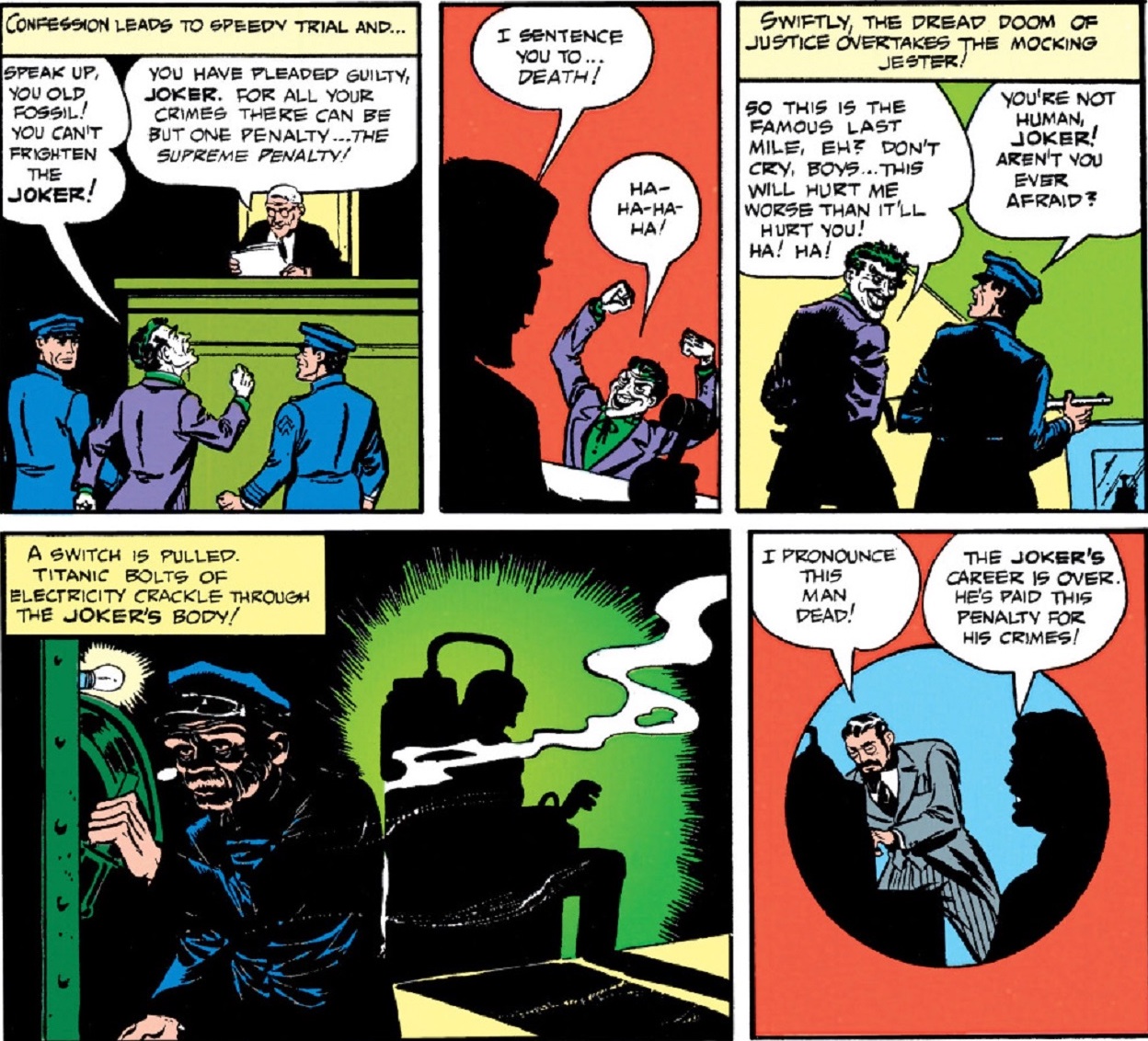 The Joker’s temporary ban from killing didn’t mean his stories weren’t dark. Check out the above panels from ‘Detective Comics’ #64! Readers have often asked why the Joker isn’t given the death penalty and executed, and -- without getting into any debates about capital punishment -- that’s exactly what happened in this comic! The Joker came up with a plan that was both ingenious and insane, where he would confess to all of his crimes, and get executed, then have his henchmen revive him with a scientific procedure. After being revived, the Joker couldn’t be prosecuted for any of his past crimes since he had already been executed for them! It’s a creative and sick plan, and it temporarily worked, but Batman ultimately caught the Clown Prince committing new crimes and their cycle resumed. 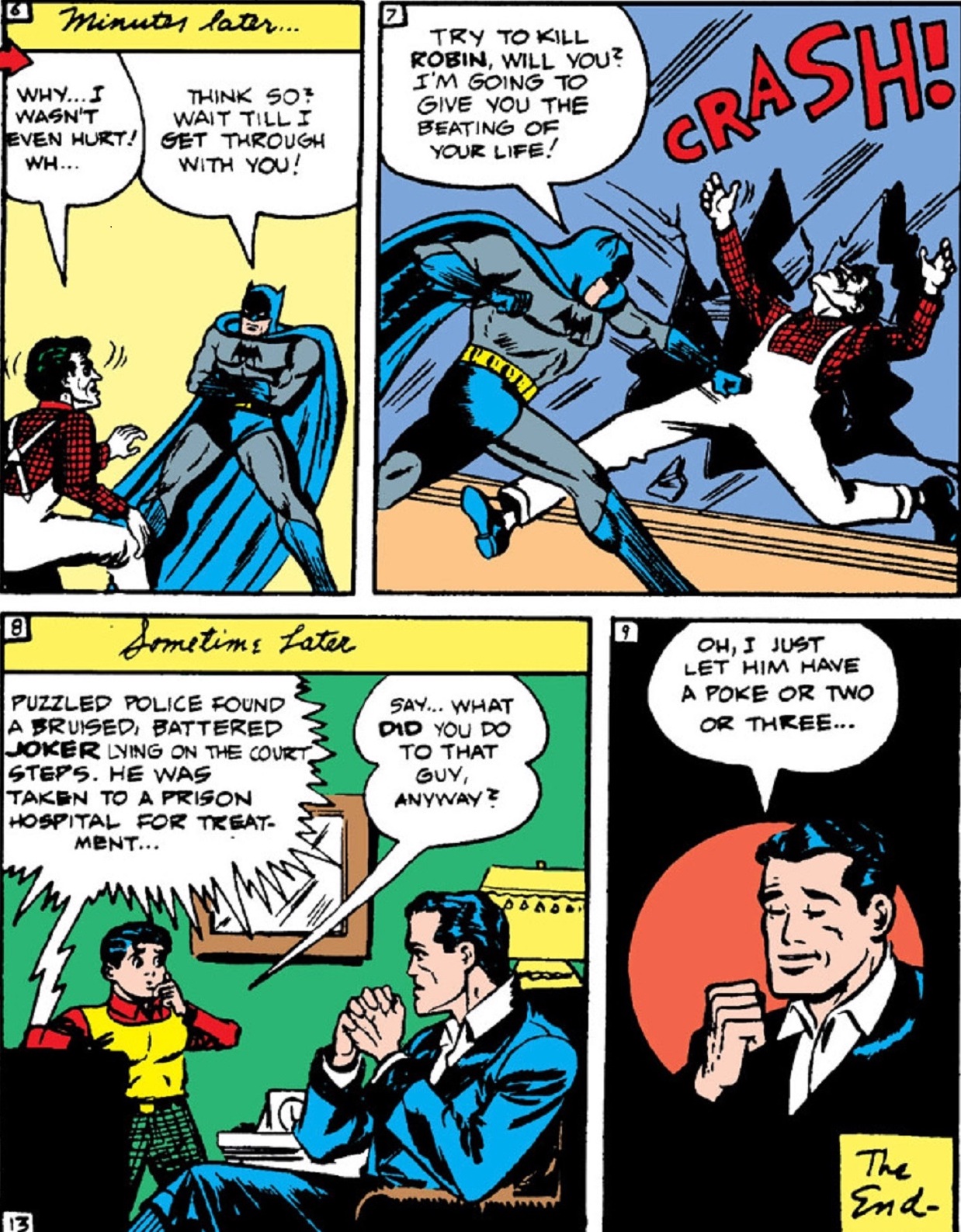 Batman may be a stoic figure with a calculating mind, but the Joker has always been one of the few villains to test the Dark Knight’s patience. In 1942’s ‘Batman’ #11 the Joker almost succeeds in killing Robin, until Batman is able to revive the lifeless body of his kid sidekick. In retaliation, Batman gives the Joker a vicious beating, which sends him to the hospital. Perhaps this is what caused the Joker to temporarily give up murder?

That theory can almost be supported by 1942’s ‘Batman’ #12, wherein the Joker turns down the opportunity to shoot Batman while he’s vulnerable. “No! Anyone can kill with a gun! But I’m not anyone! I’m the Joker,” the Clown Prince says. “When I kill it must be with some imagination. But you are right. I must get the Batman before he gets me.” This was the beginning of Joker’s tradition of creating of imaginative death traps, a later staple of the 1966 ‘Batman’ television series. 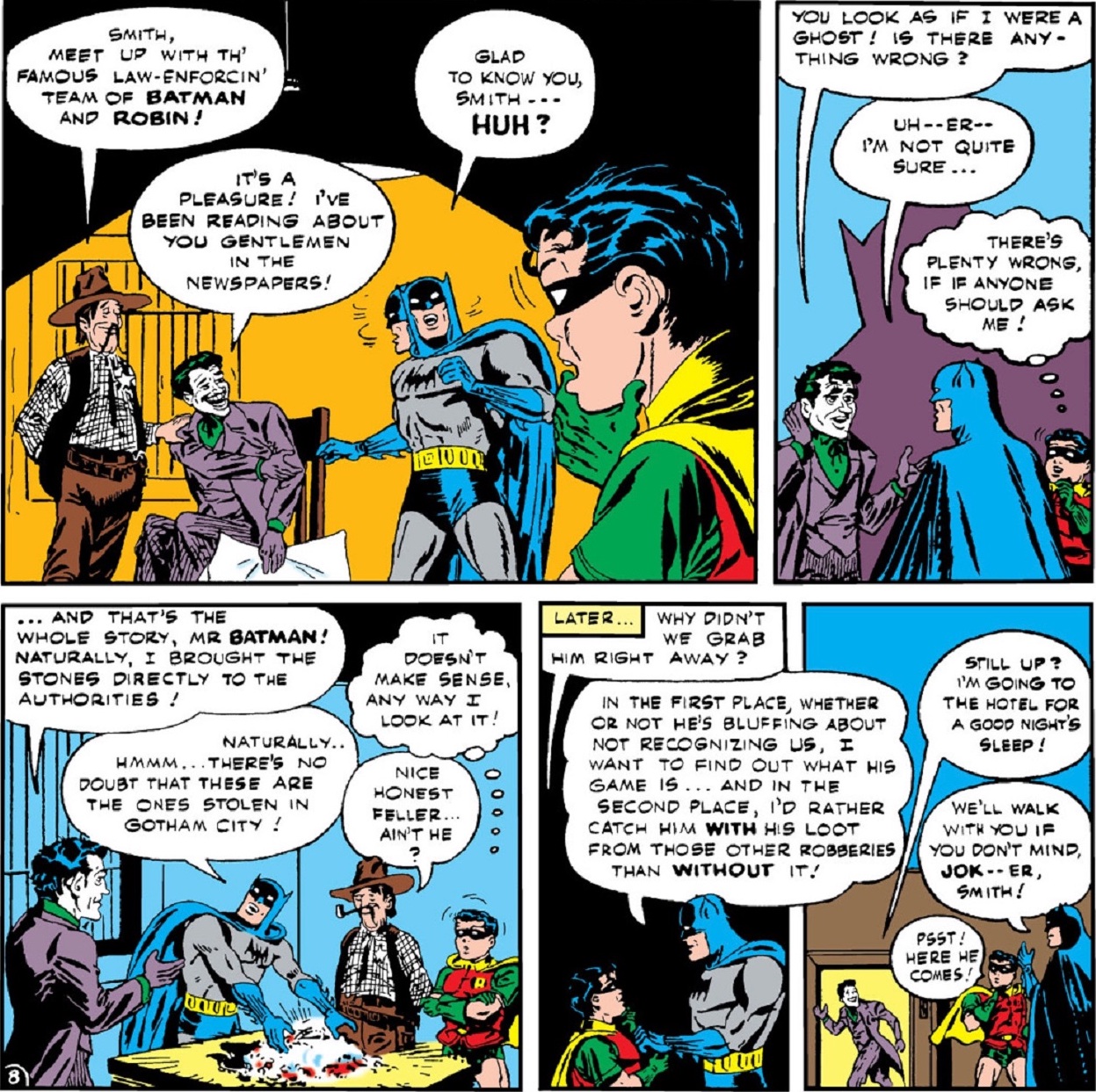 If you’ve ever wondered what a heroic Joker would be like, check out 1943’s ‘Batman’ #16. An amnesiac Joker winds up becoming the hero of a small town, baffling Batman and Robin. If the sight of a heroic Joker is unsettling to you, you’re not alone. Batman and Robin were weirded out and the Joker’s henchmen were mortified. But a bonk on the head cured Joker of his amnesia, and he returned to his villainy. 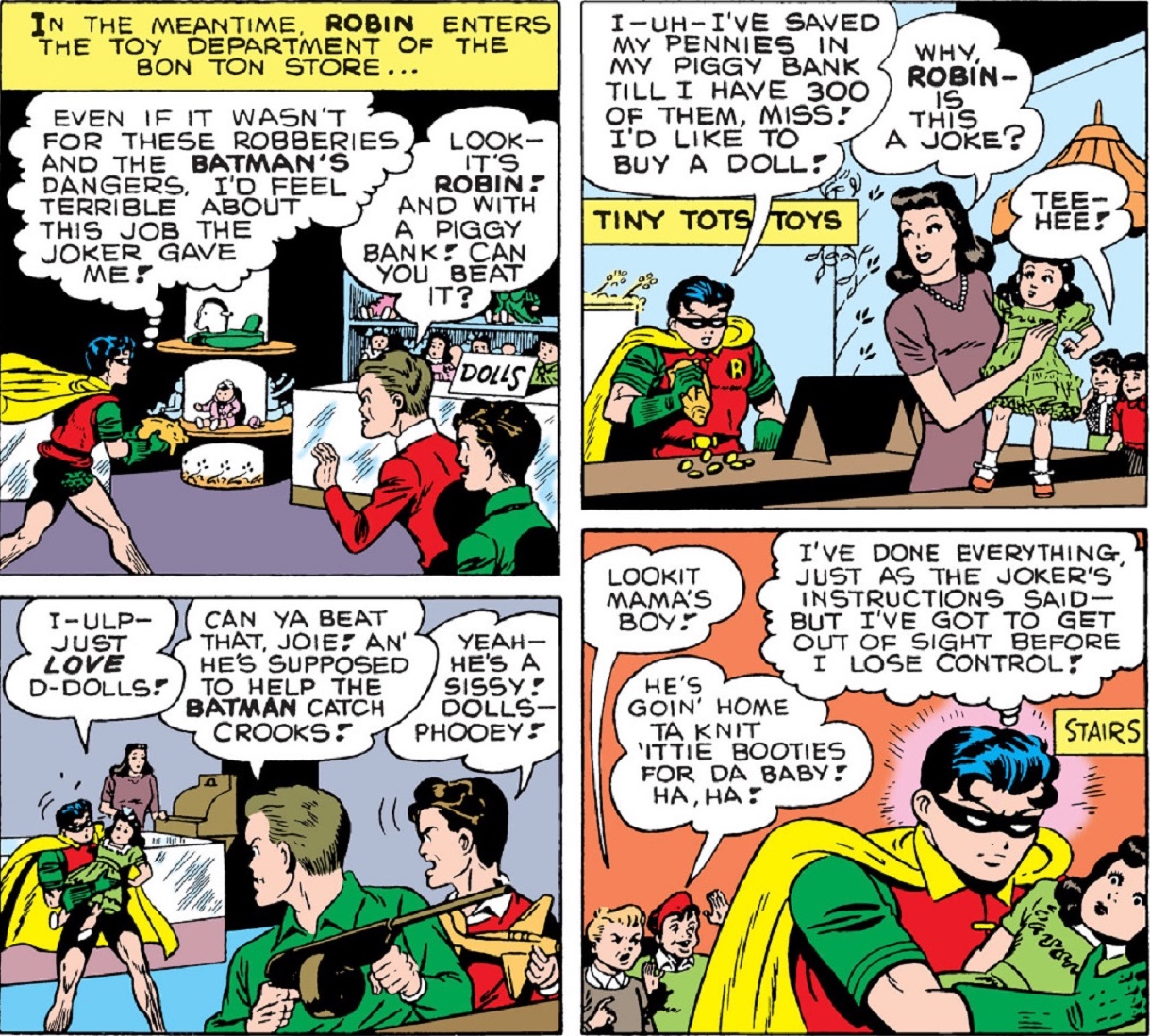 By 1945, the Joker had replaced his earlier murderous tendencies with a cruel obsession for practical jokes and humiliation. In ‘Batman’ #32, he captured Batman and told Robin the only way to ensure his partner’s safety is to play along with some fraternity-inspired initiation pranks. The Boy Wonder, who takes the Joker for his word for some reason, purchases girls' toys and publicly humiliates himself for Batman’s safety. If that’s not the worse thing Joker ever did to Dick Grayson, it certainly comes close.

That’s it for the Golden Age! Join us next time as we look at the Joker’s looniest crimes from the 1950s and 1960s!

In the meantime, check out these recommended issues...

What are your favorite Joker stories from the Golden Age? Let us know in our Community!