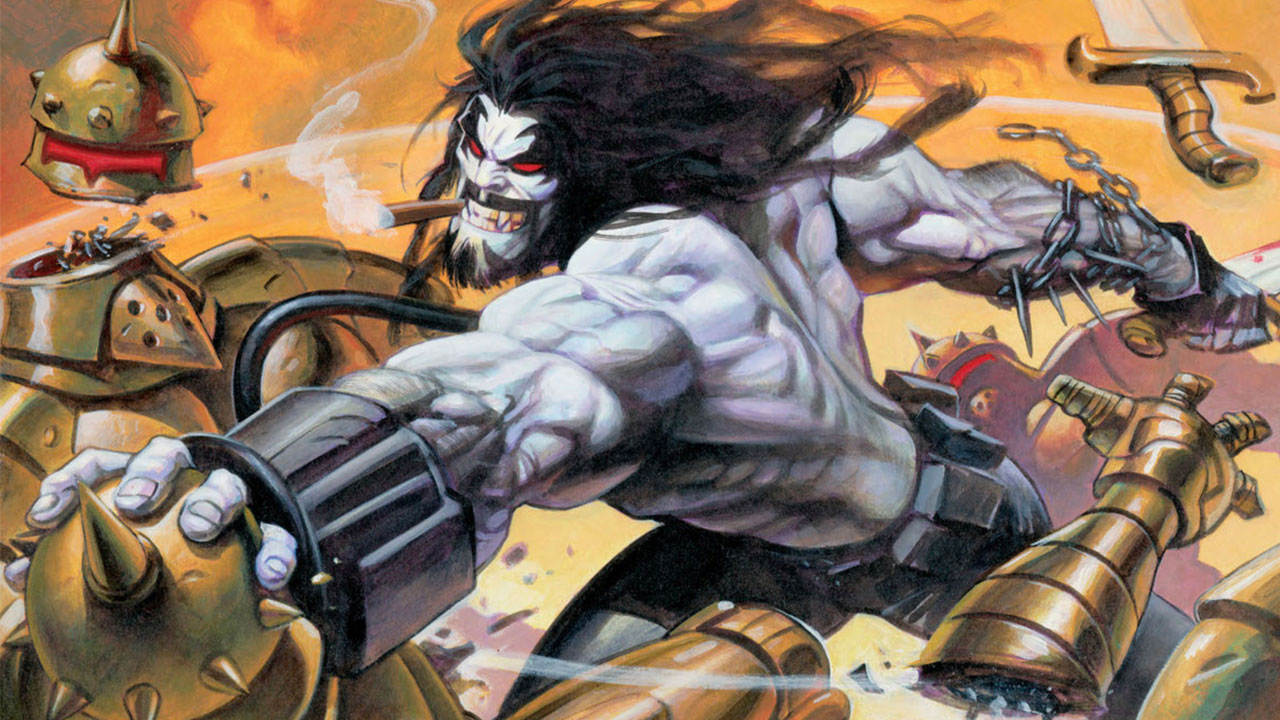 Lobo is the baddest bastich in the galaxy! You would be too if your name translated to “He who devours your entrails and thoroughly enjoys it.” The Last Czarnian has traveled the universe fragging bounties and battling superheroes -- and he's gone through heaven and hell, literally! With his starring role in Krypton's second season (now on DC Universe) there's never been a better time to fall in love with Lobo. So grab your chainhook, because we’re looking back at five of The Main Man’s most badass moments.

BASTICH OUT OF HELL 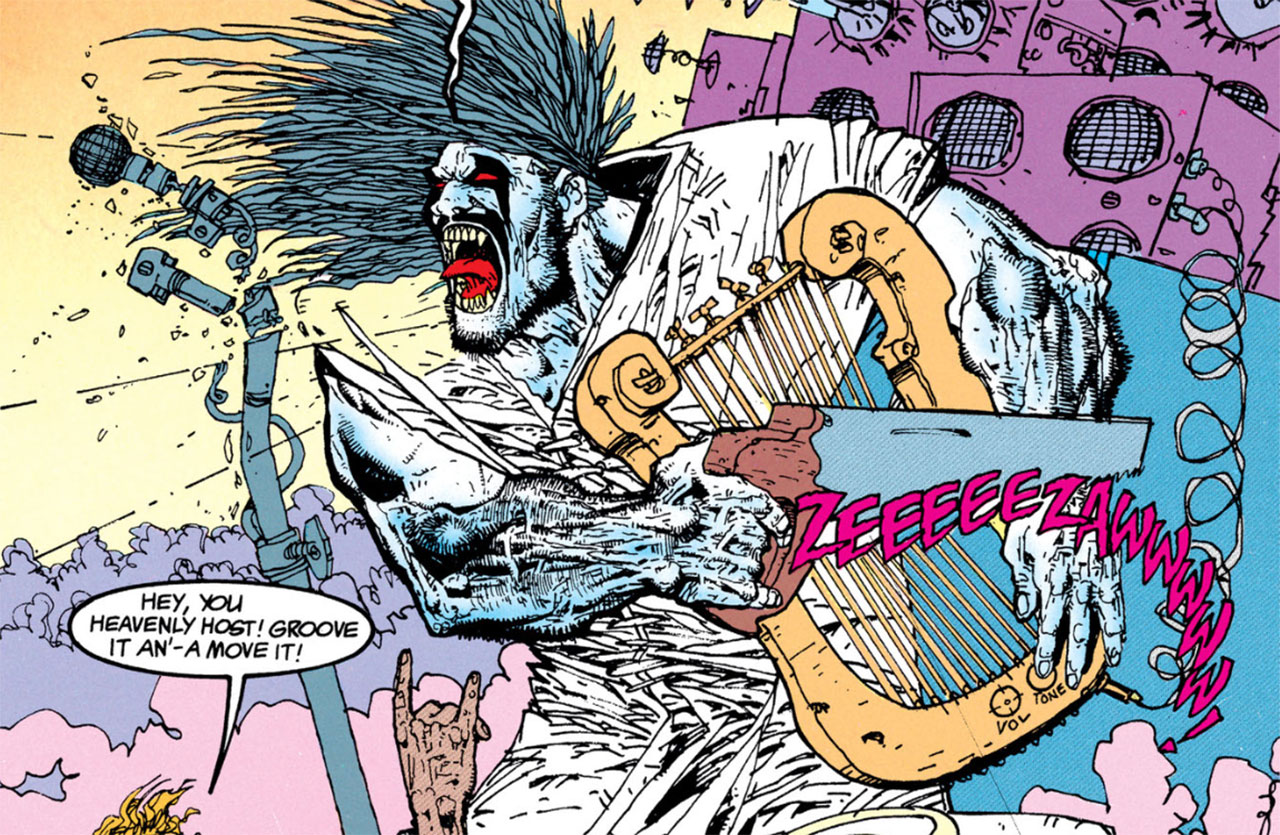 If Heaven and Hell can agree on one thing it’s no Lobos allowed! In 1992’s Lobo’s Back, he's killed and sent to Heaven, where he incites drinking and fighting among the angels. This gets the Main Man a first-class ticket to Hell.

In the fiery depths, Lobo has the time of his life, er, afterlife. He feels right at home among the violence and chaos, and is soon kicked out for enjoying it too much. (It’s punishment, not a vacation, Lobo.) Without an afterlife, Lobo has no choice but to return to the mortal plane with his newfound immortality. 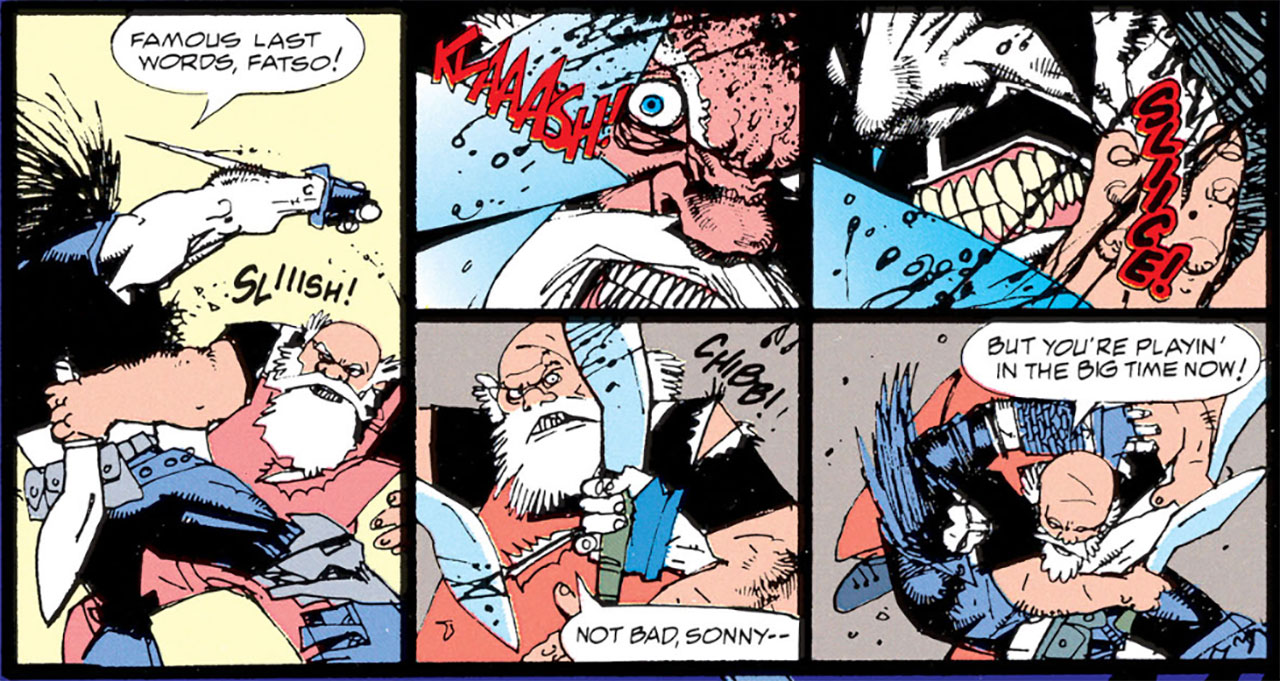 You better watch out, you better not cry -- because Lobo’s been hired to kill Santa! A drunk Easter Bunny puts a bounty on Father Christmas. In The Lobo Paramilitary Christmas Special, the Main Man heads up north and settles the score with Santa. The bloody beatdown ends with Lobo taking Kris Kringle for a slay-ride. That’s one way to earn a permanent spot on the naughty list.

In true '90s fashion, after killing Santa Claus, Lobo becomes him… sort of. He uses the reindeer and sleigh to deliver bombs all over the world. Definitely a worse gift than coal in your stocking. 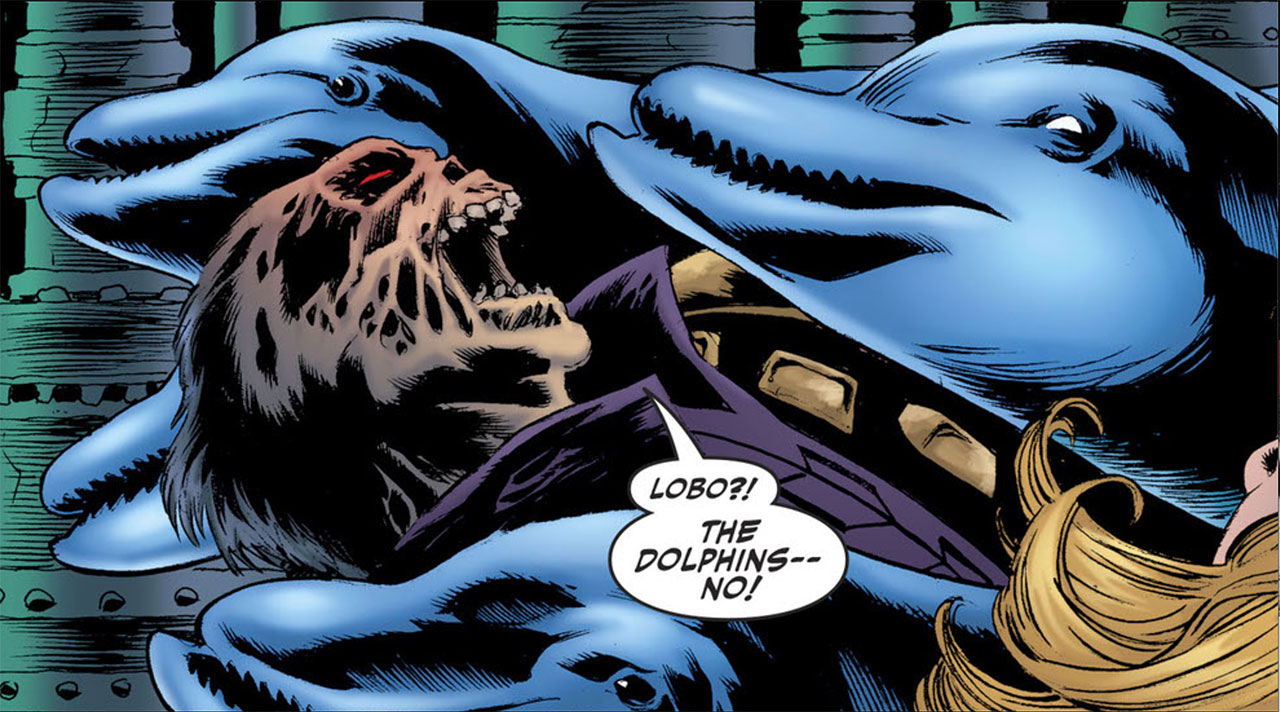 Nothing’s more badass than standing up for the rights of animals, as Lobo well knows. He's particularly fond of Space Dolphins. Since he was young, he’s had a special bond with the species. He’s been known to ride them in a pinch and also claims that being around them cures hangovers.

BORN TO BE WILD 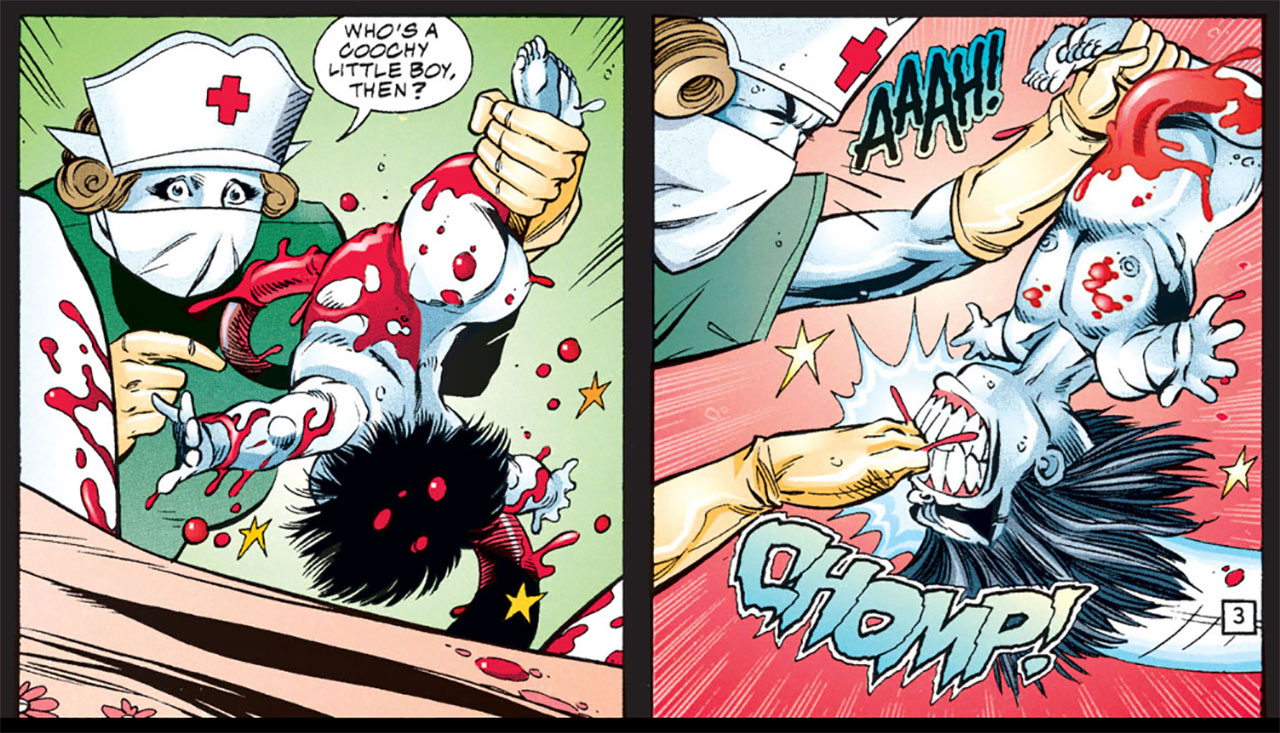 1993’s Lobo #0 delves into how the Last Czarnian came to be, starting with his birth. To say that Lobo “came out fighting” would be an understatement. The first thing he did was bite off a nurse’s fingers. The second? He chased down a doctor with a scalpel. This issue goes on to explain that the nurse spent the rest of her life in an asylum.

Not only is he born bad, but he’s the first violent kid in a world full of pacifists. He would go on to eradicate the entire planet as part of his high school science project. The terrible twos came early for Lil’ Lobo.

THE MAIN MAN OF STEEL 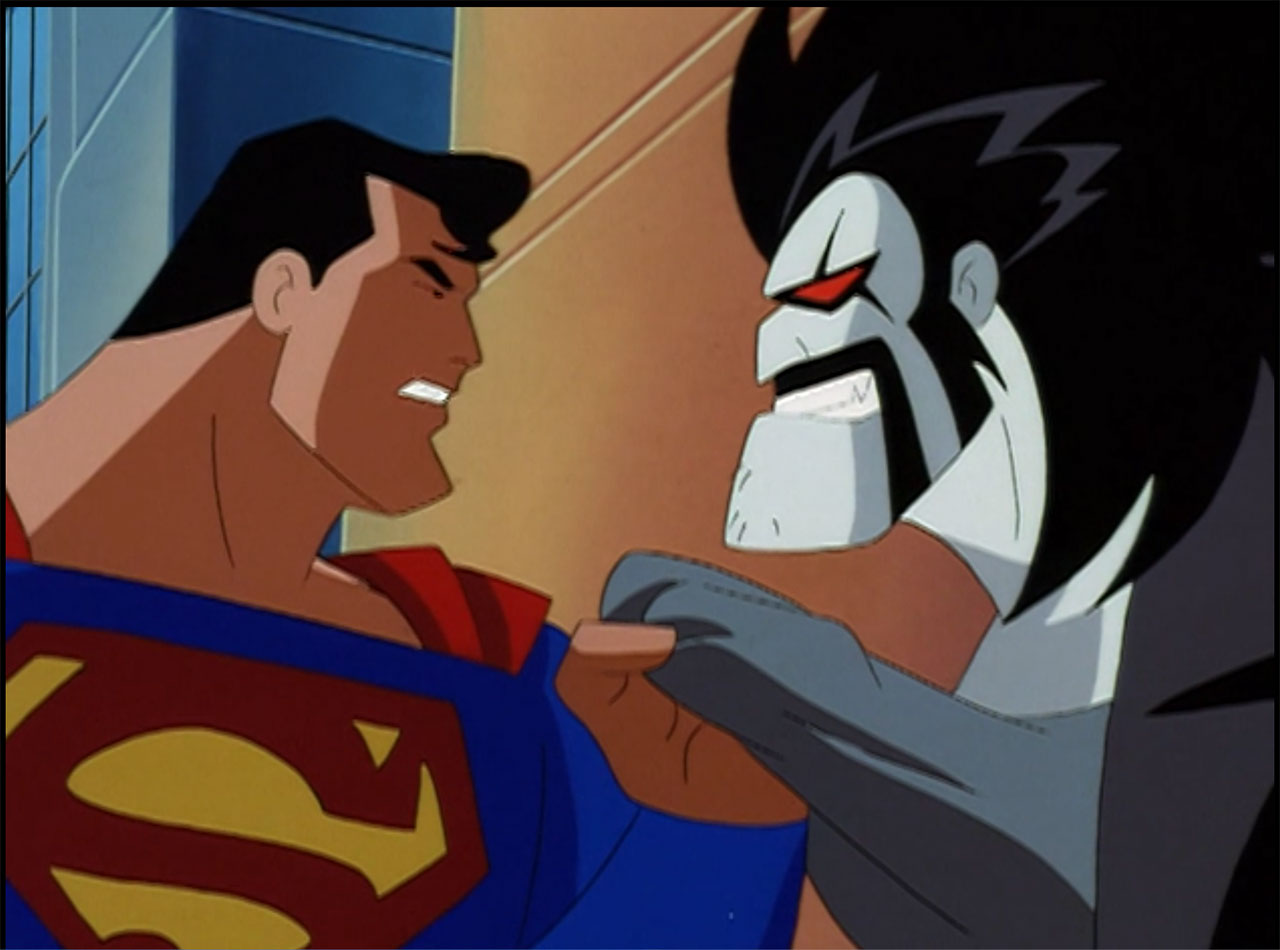 Lobo made his screen debut in the Superman: The Animated Series’ episode, “The Main Man -- Part 1.” It’s worth mentioning that Brad Garrett does an excellent job voicing this Lemmy Kilmister-inspired version of the character. For a lot of younger fans, this was most likely their introduction to him; and it’s a perfect adaptation.

An alien creature known as the Preserver collects species from around the galaxy. He contracts Lobo to bring him the last Kryptonian. Once on Earth, Lobo goes toe-to-toe with Superman in one of the best fight scenes in the show. Lobo doesn’t even break a sweat! In part 2, Lobo finds himself trapped as well and must team up with Supes to break out. Lobo's a great foil for the Man of Steel and this two-part story is full of the kind of fun for which he's known.

What’s your favorite Lobo moment? Let us know in our Community!