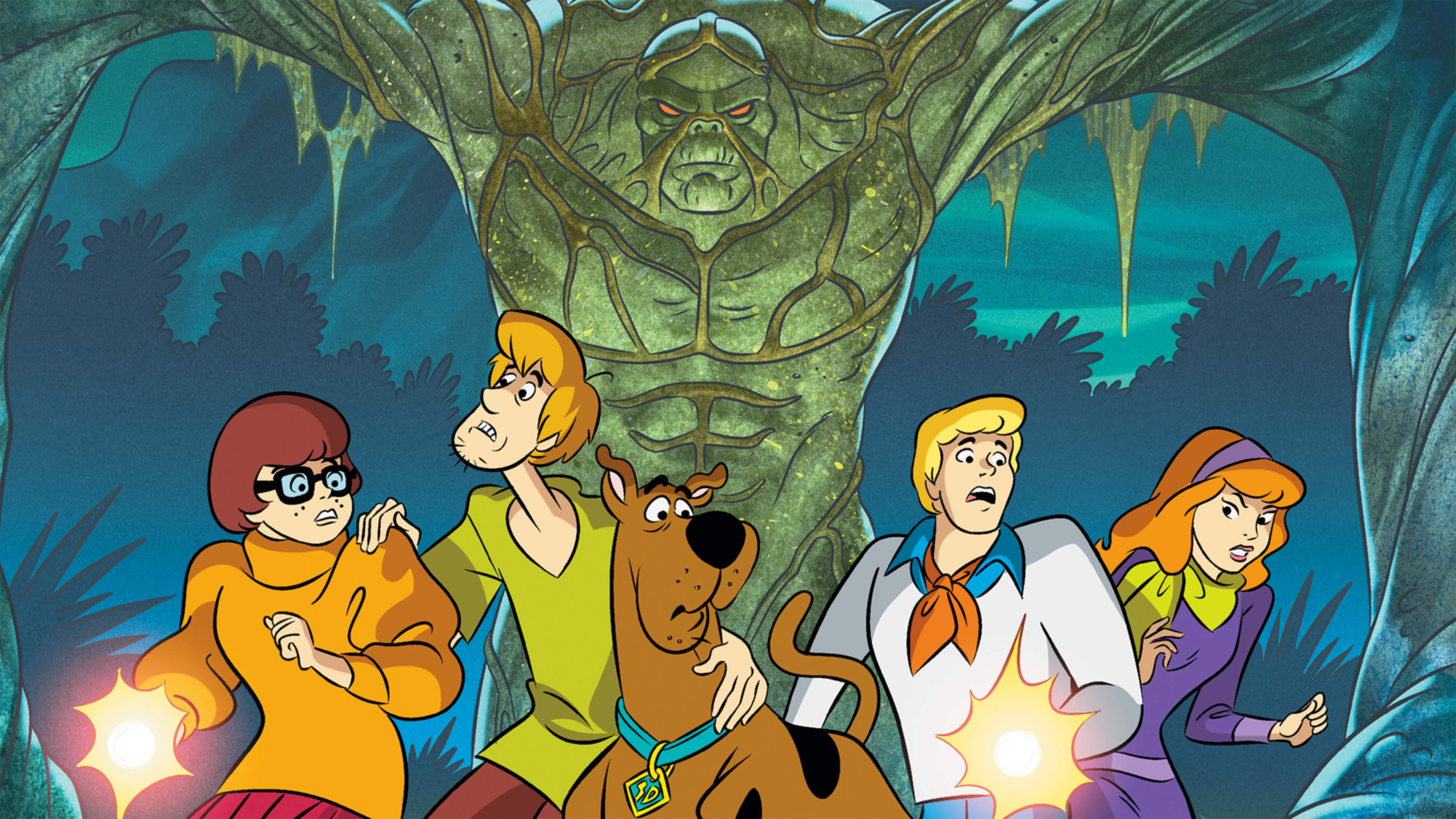 Like, Zoinks! The entire Scooby-Doo Team-Up collection is now available on DC Universe. Follow Scooby, Shaggy, Daphne, Fred, and Velma too as they team-up with various characters from the Hanna-Barbara and DC Universes. Now hop in the Mystery Machine and grab a box of Scooby Snacks (or twelve) for our 7 best Scooby-Doo team-ups! 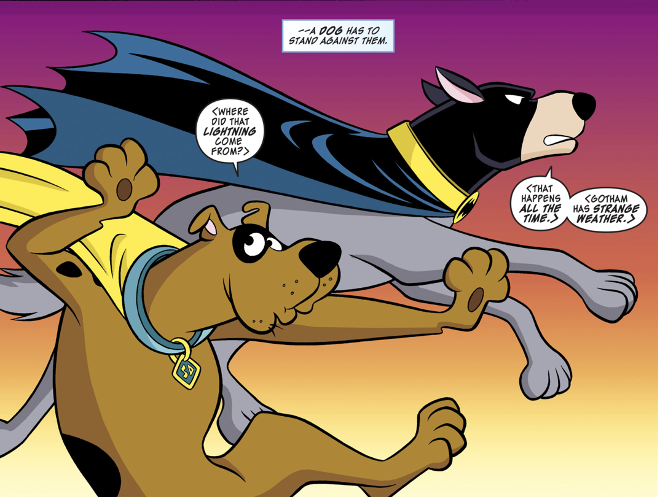 When the Dynamic Duo and the Mystery, Inc. gang are victims of Scarecrow’s fear gas, it’s up to Scooby-Doo and Ace the Bathound to save the day. Having the comical Scooby play Pup Wonder to the straight-laced Ace is just plain fun! Heck, it’s fun just to see Scooby interact with another dog (that isn’t Scrappy). Ace doesn’t appear too often in comics, so we always welcome any inclusion of The Bark Knight.

CHALLENGERS OF THE UNKNOWN 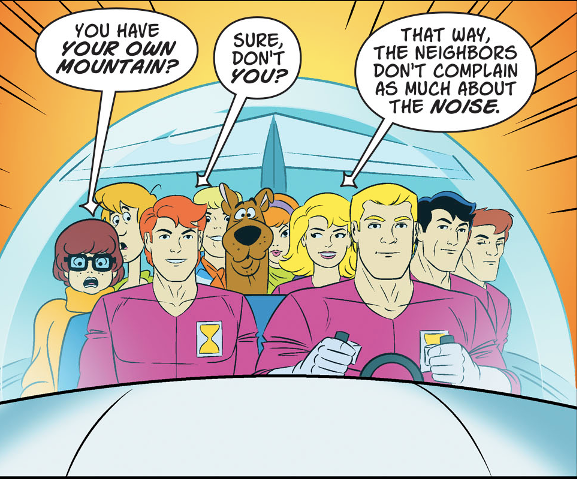 Mystery, Inc. and the Challengers of the Unknown are called to solve the same mystery. Initially, the teams compete to solve it first, but when things get hairy they pull together to help each other out. The newly formed allies go on a mask-ripping adventure featuring The Secret Six and the evil Multi-Man.

It’s great to see the Challengers back in comics! Most of these issues are full of small nods or cameos, but to have the Challengers as the co-stars is a huge win. Even Cave Carson and Rip Hunter make brief cameos in this story. 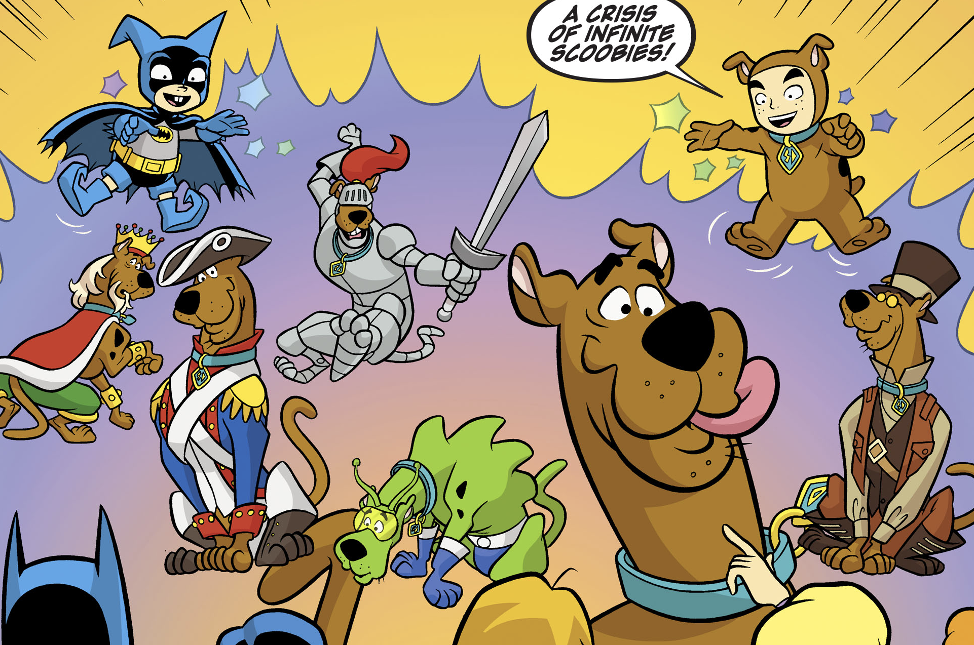 Scooby and the gang meet the 5th dimensional imp and super Batfan, Bat-Mite. Together, they successfully take down both False Face and the Spook just in time to meet their biggest fan, Scooby-Mite!

This imp wants to create the greatest Scooby-Doo adventure ever by giving the canine super powers and conjuring up his most famous ghastly foes. The two mega fans have a one-upsman contest to determine who is the better hero: Batman or Scooby-Doo. Daphne convinces them to stop meddling in the adventures and just enjoy them -- advice that Twitter users should listen to.

Zombies are running amok in the swamp and it’s up to Scooby-Doo and the gang to solve the mystery while the Swamp Thing keeps an eye on them from the shadows. The zombies seem to be controlled by none other than Solomon Grundy.

When Grundy gets the drop on the gang, the mysterious Swamp Thing emerges to defend them. Using the green, Swamp Thing is able to restrain Grundy and discover that Madame Voodoo is the real culprit. And she would've gotten away with it if it wasn't for those pesky kids, and that pesky Avatar of the Green! 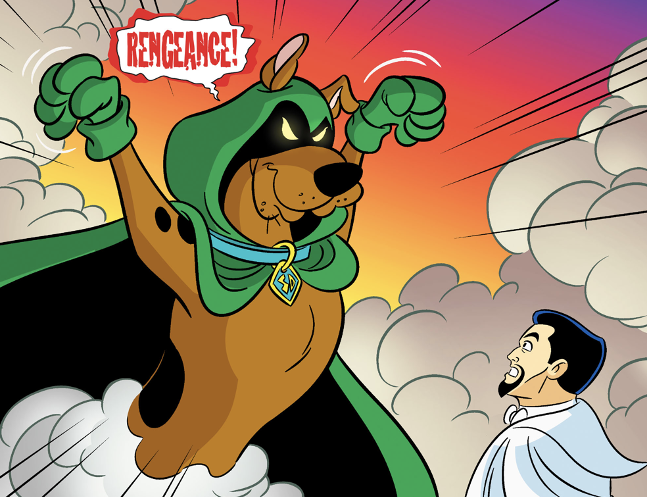 In this Halloween special, the gang gets a visit from the Phantom Stranger. Naturally Scooby and Shaggy run at the word “Phantom,” but Shaggy gains some courage when he’s possessed by Deadman. They then seek the help of the gang to discover the whereabouts of other missing ghost heroes.

They soon discover that the evil alchemist Tannarak is behind it, and he tries to trap the gang. But they're saved when The Spectre possesses Scooby-Doo, freeing all of the ghosts and scaring Tannarak away for good. 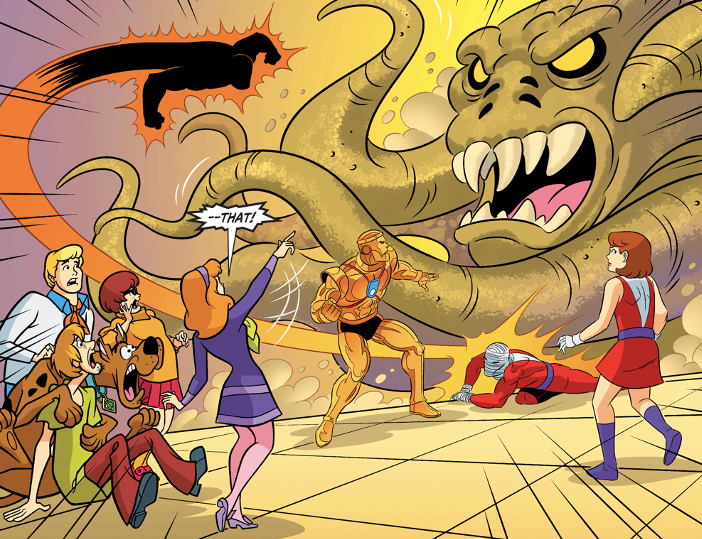 After several monster attacks on their mansion, the Doom Patrol calls on Mystery, Inc. to solve the case. Each time, the monster vanishes into thin air. Velma analyzes the patterns of the villains and notices they all fight within the same general area. She soon deduces that it must be a single individual causing the monsters -- the Doom Patrol's longtime foe Animal-Vegetable-Mineral Man! With the help of Flex Mentallo, the two teams save the day.

A few years ago, there was a fantastic Supernatural / Scooby-Doo crossover. With the new season of Doom Patrol just announced, we can only hope that Mystery, Inc. teams up with them again on the small screen. Who wouldn't love to see Velma drop a few F-bombs along with Robotman?

The gang meets Mister Miracle and Big Barda backstage after one of their shows. While chatting, three giant monsters attack. Suddenly a boom tube opens, swallowing the monsters but also Barda, Daphne, and Velma. Mister Miracle and the boys use a Mother Box to take the Mystery Machine to Apokolips. There they find Granny Goodness and her newest Female Furies: Velma and Daphne. They defeat Granny and break her hold over their friends just in time to make it back for lunch. Which, as Shaggy can tell you, is imperative for solving any and all mysteries.

Jinkies! Tell us what YOUR favorite Scooby-Doo team-up is in our Community!