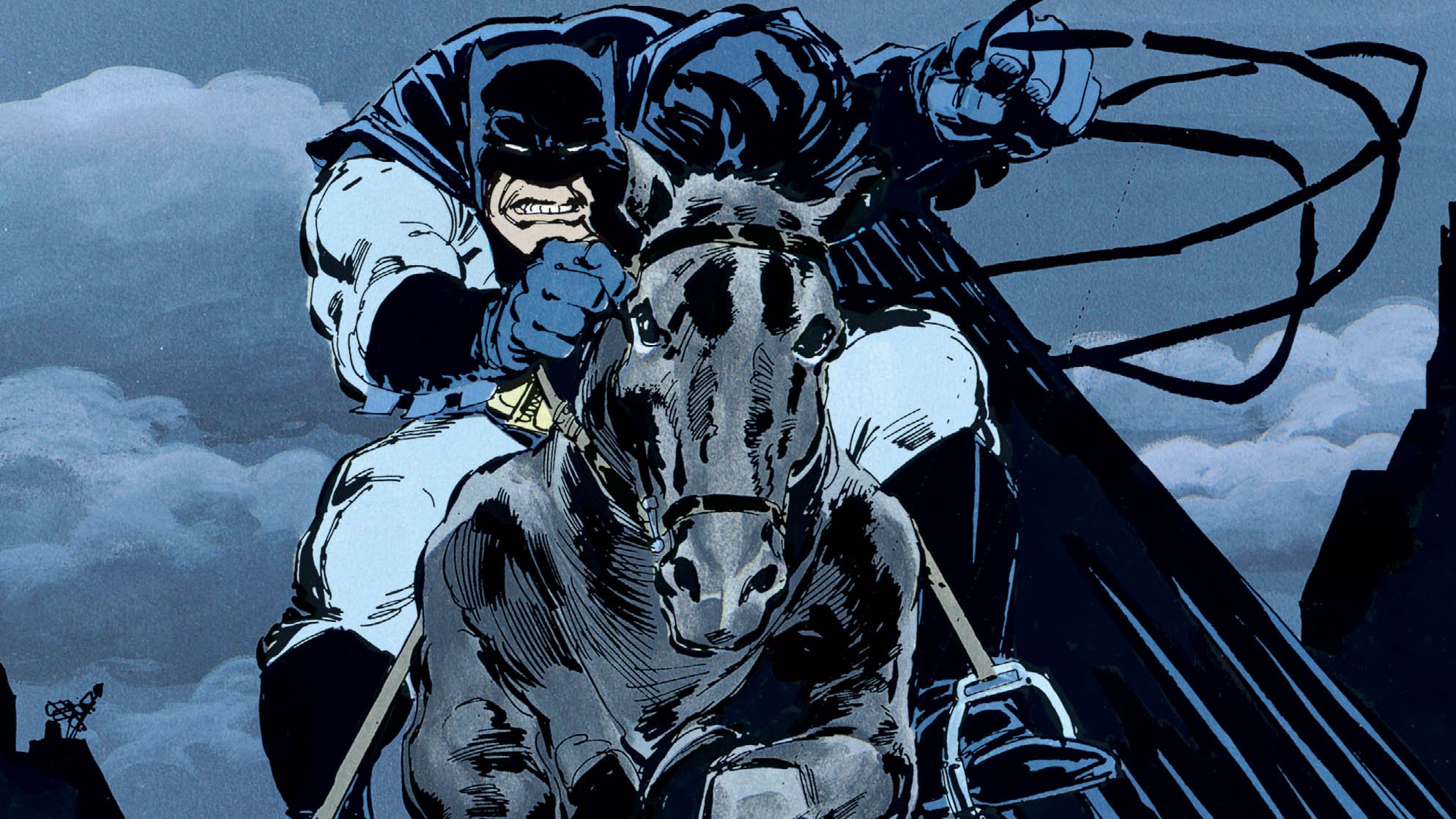 Here's the thing you have to understand when you're looking at Batman: he wasn't always the guy he is today.

Sure, the basic elements have almost always been there, the ears and the cape and the chest emblem. But the guy beneath the mask and the costume? He's changed a lot. After all, it's been close to eighty years since he debuted in Detective Comics #27, so changes were bound to happen. But in the scope of that history, the Dark Knight of today is a relatively recent invention -- and he owes a great deal of his existence to the 1986 four-issue limited series The Dark Knight Returns.

Written and drawn by Frank Miller, inked by Klaus Janson, and colored by Lynn Varley, The Dark Knight Returns remains, after more than thirty years, one of -- if not the --  most popular Batman stories of all time. It's certainly among the most critically acclaimed. Upon its initial publication it drew praise from the sort of mainstream media outlets that had shunned comic books as mere kids' stuff. But they had reason. Because there'd never been anything quite like this comic book. 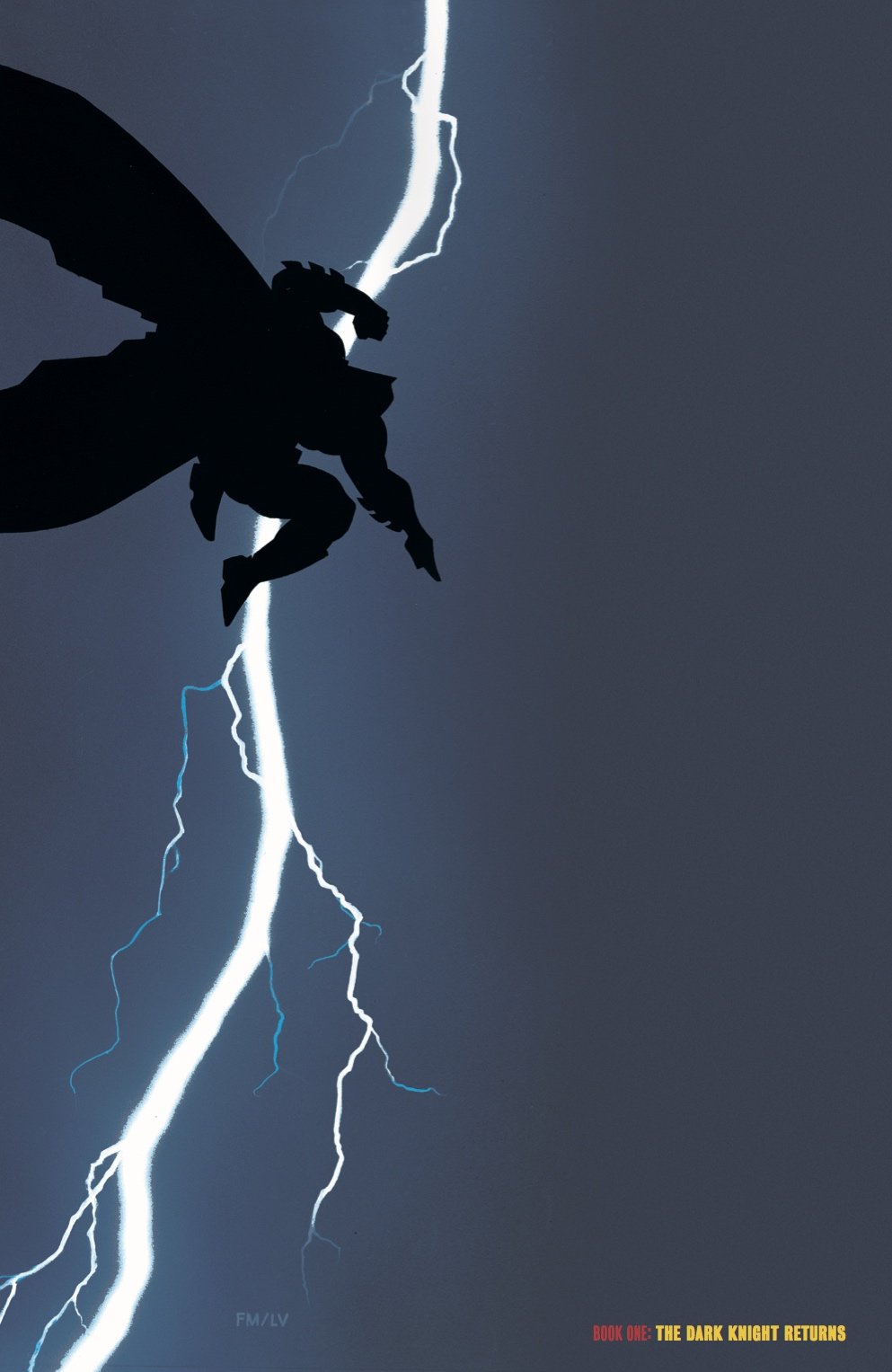 Since his creation, Batman had gone through some pretty disparate phases. In his earliest days, back in the Golden Age of comics, when the idea of the superhero was just starting to coalesce, he was a vigilante who sometimes wasn't above doling out justice in the form of hot lead. But with the addition of Robin, the grim-and-gritty avenger of the '30s was replaced by the good-natured father figure of the '40s. By the time of the Silver Age, in the 1950s, Batman was a duly deputized lawman, strutting down the streets of Gotham in the daytime like any other police officer.

Then came the camp crusader of the 1966 Batman TV show, which, love it or hate it, marked the character as a figure of irony, pop art, and candy-colored Bang! Zoom! Pow! But the '66 show's popularity faded as quickly as it began. And artist Neal Adams and writer Denny O'Neil made the Batman a no-nonsense nocturnal crusader once more, quite literally putting the "detective" back in Detective Comics.

Although comics fans again took the Dark Knight seriously, the general public, helped in no small measure by the '66 Batman's endless reruns in syndication, still regarded the character as a figure of fun. 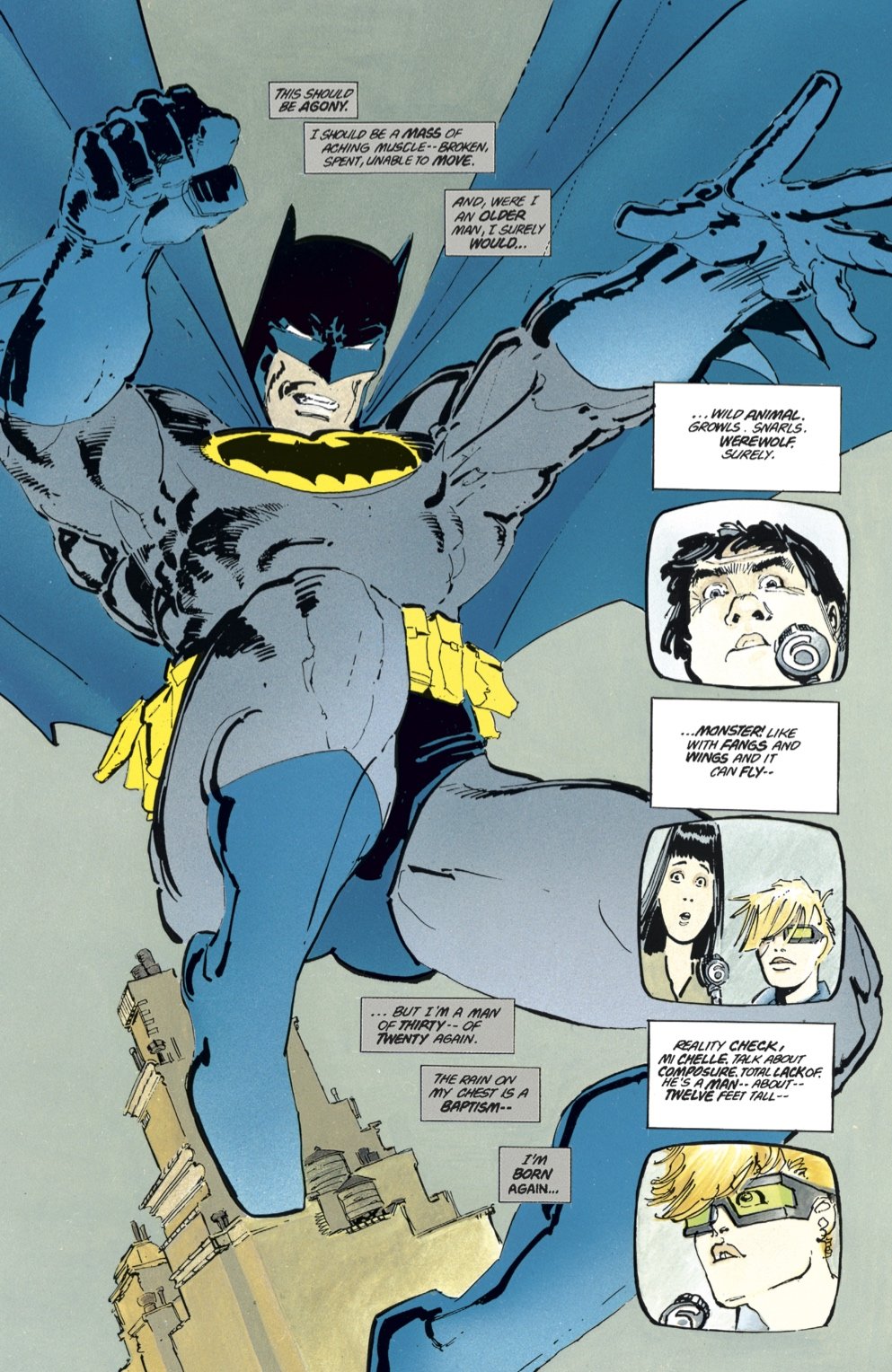 Enter Frank Miller. A disciple of Neal Adams who never found Batman funny. Horrified by the crime he saw on the streets of 1980s New York City (his home town), Miller channeled his rage and disgust into his art. He joked that his decision to depict an older Dark Knight stemmed from his frustration at finally reaching the age at which Batman was usually portrayed in comics.

The Dark Knight Returns offered a decidedly new take on Bruce Wayne: an aged and grizzled vigilante who'd retired in the wake of Robin's death, but who could no longer stand by and watch his city succumb to lawlessness. Miller took the most basic parts of Batman's Golden Age origin and pushed them to their logical extremes. What would twilight look like for a man who'd vowed to wage eternal war on criminals? How would someone with a mission like Bruce Wayne see his legacy live on after his death? What kind of future awaited Gotham City? 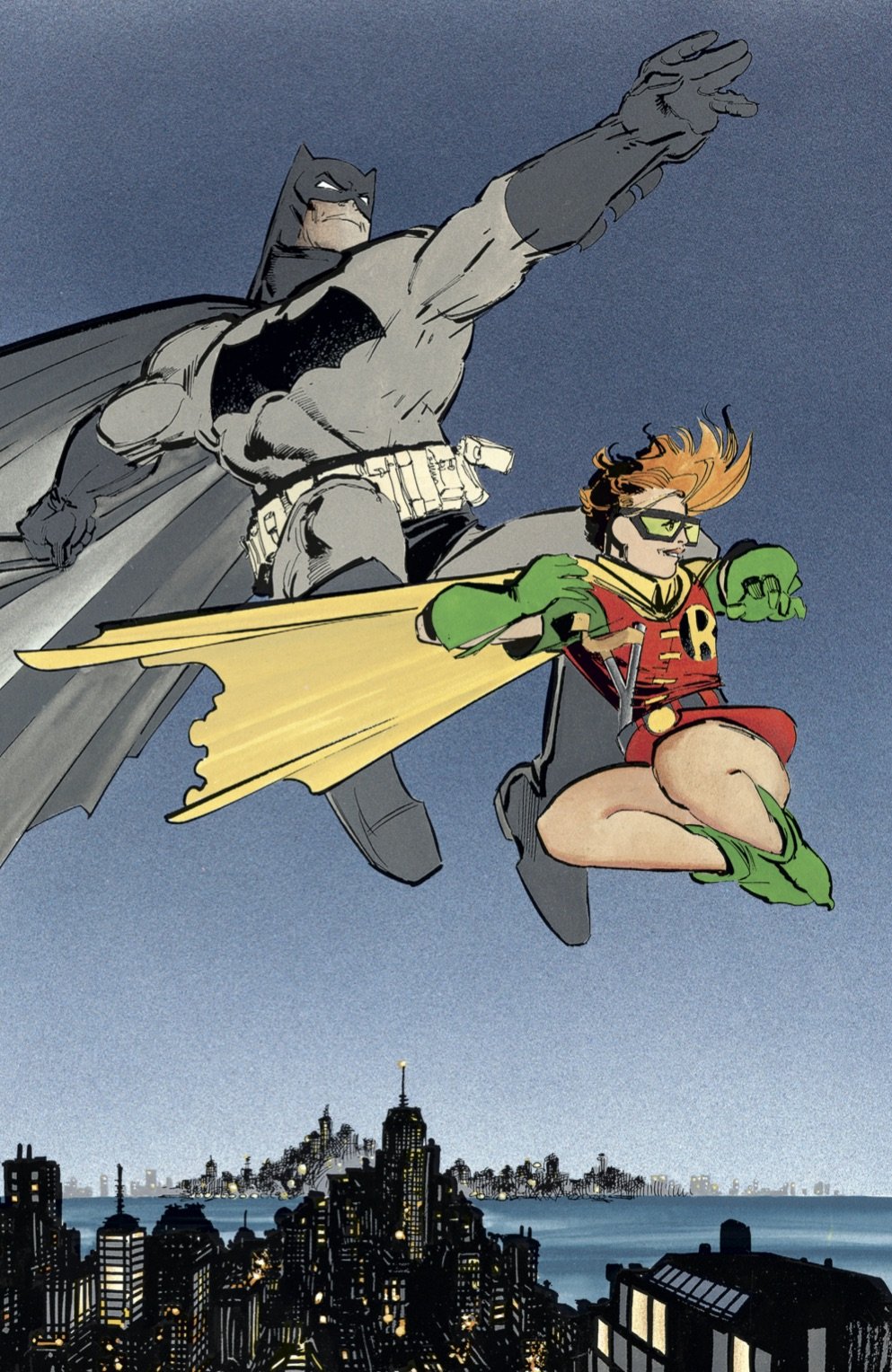 Though they're not considered canon in today's DC universe, the answers that Miller came up with shook the foundation of the comics industry. Along with Watchmen, The Dark Knight Returns revealed to scores of superhero comic creators a heretofore largely untraveled avenue for self-expression. Its success paved the way for Miller's follow-up Batman epic, Batman: Year One, for Alan Moore and Brian Bolland's The Killing Joke, for Grant Morrison and Dave McKean's Arkham Asylum, and for "Elseworlds" tales like Gotham by Gaslight. It also led to a Batman comic that saw a steady stream of writers and artists expand Gotham's narrative borders even as they dug into undiscovered corners of Bruce Wayne's mind -- Batman: Legends of the Dark Knight.

The wider universe of pop culture also took notice. Director Tim Burton cited The Dark Knight Returns -- along with The Killing Joke -- as one of the principal inspirations for his 1989 Batman movie, a mega-blockbuster that transformed Hollywood and opened the door for three sequels, Batman: The Animated Series (and thus the entire DC Animated Universe), and Christopher Nolan's The Dark Knight Trilogy. 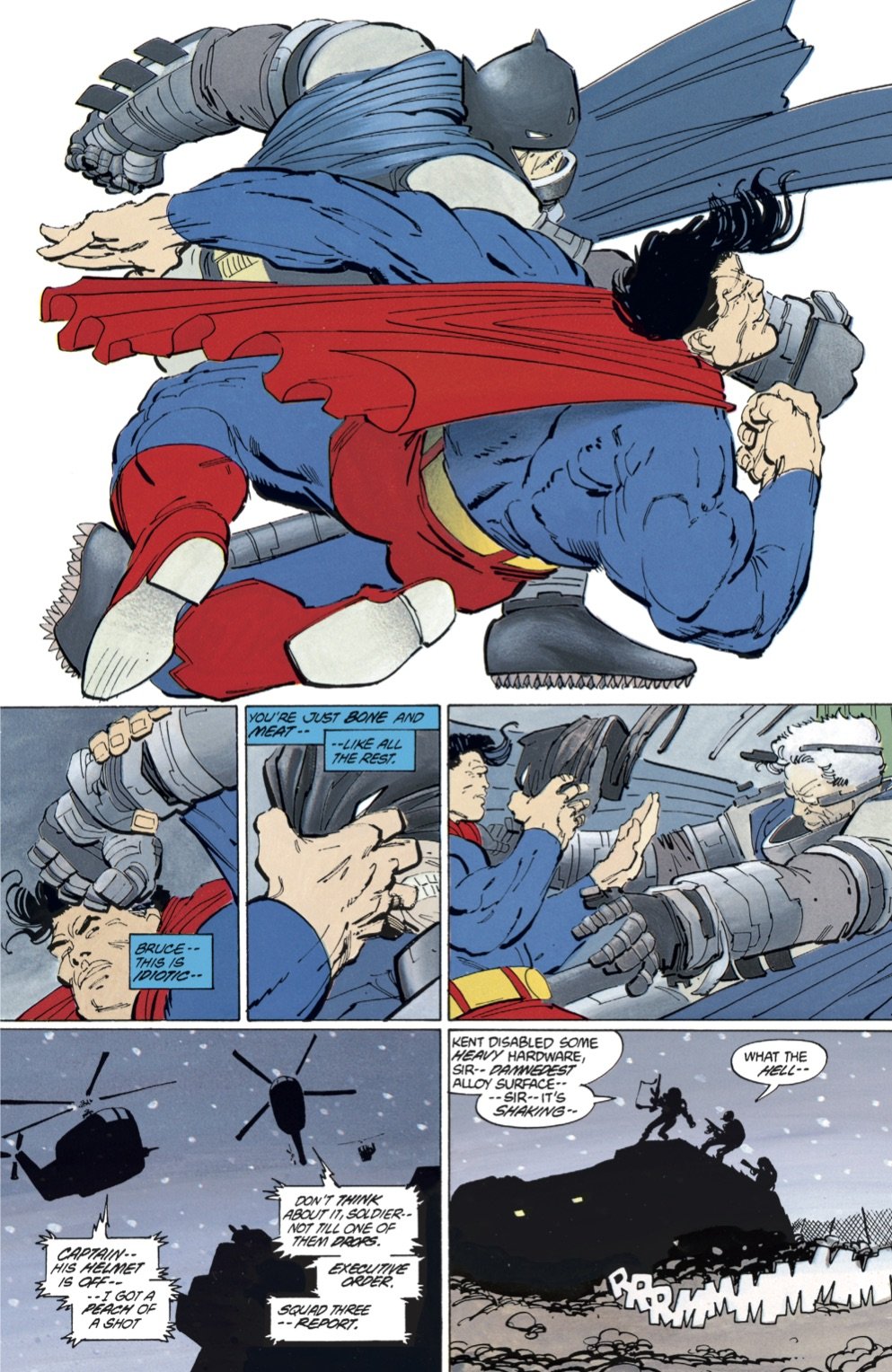 For Miller's masterpiece is indeed the gift that keeps on giving to anyone who tells or enjoys stories, redefining not only Gotham's guardian, but an entire medium and genre. The same can be said of all too few creative works. 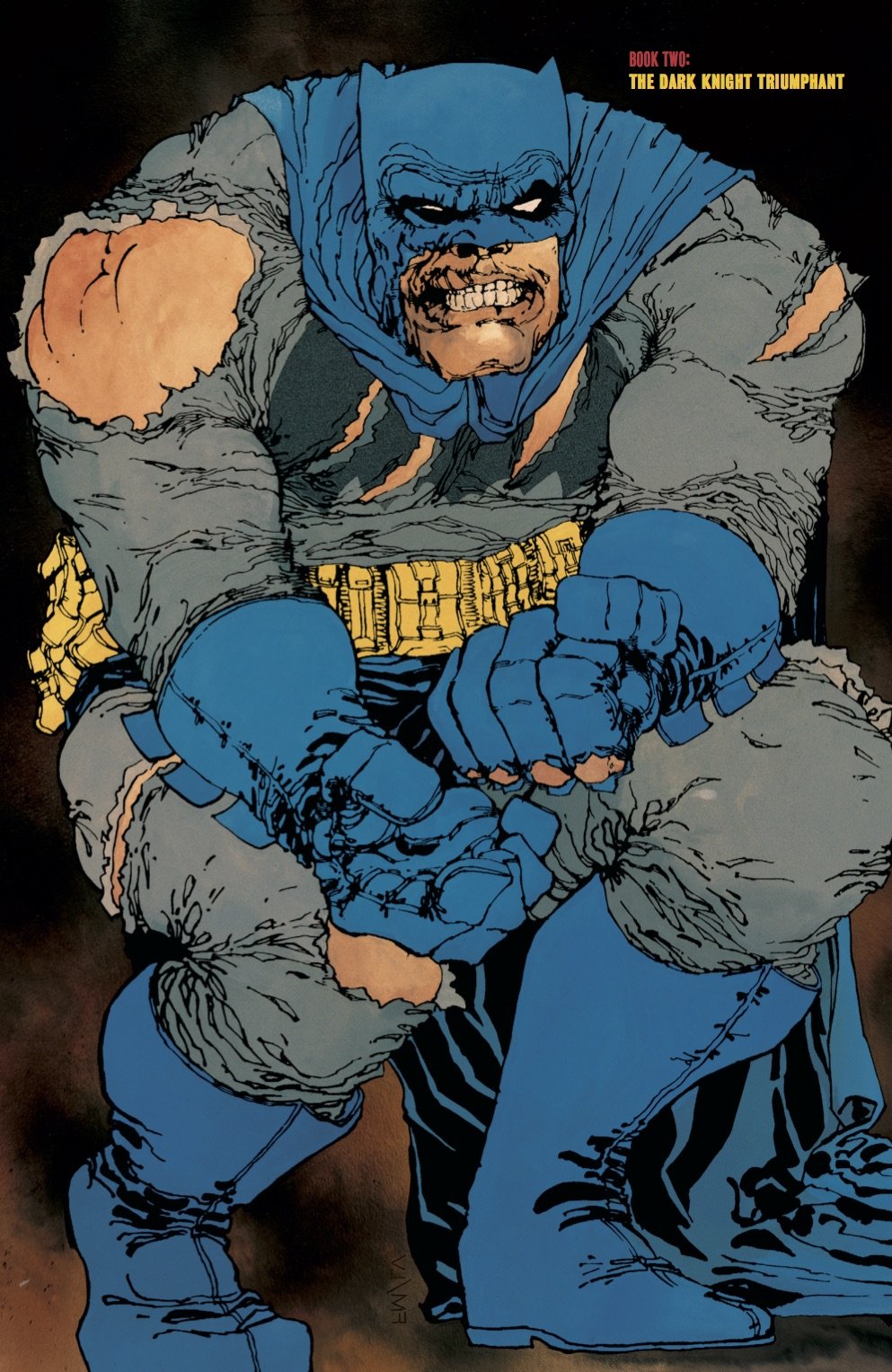