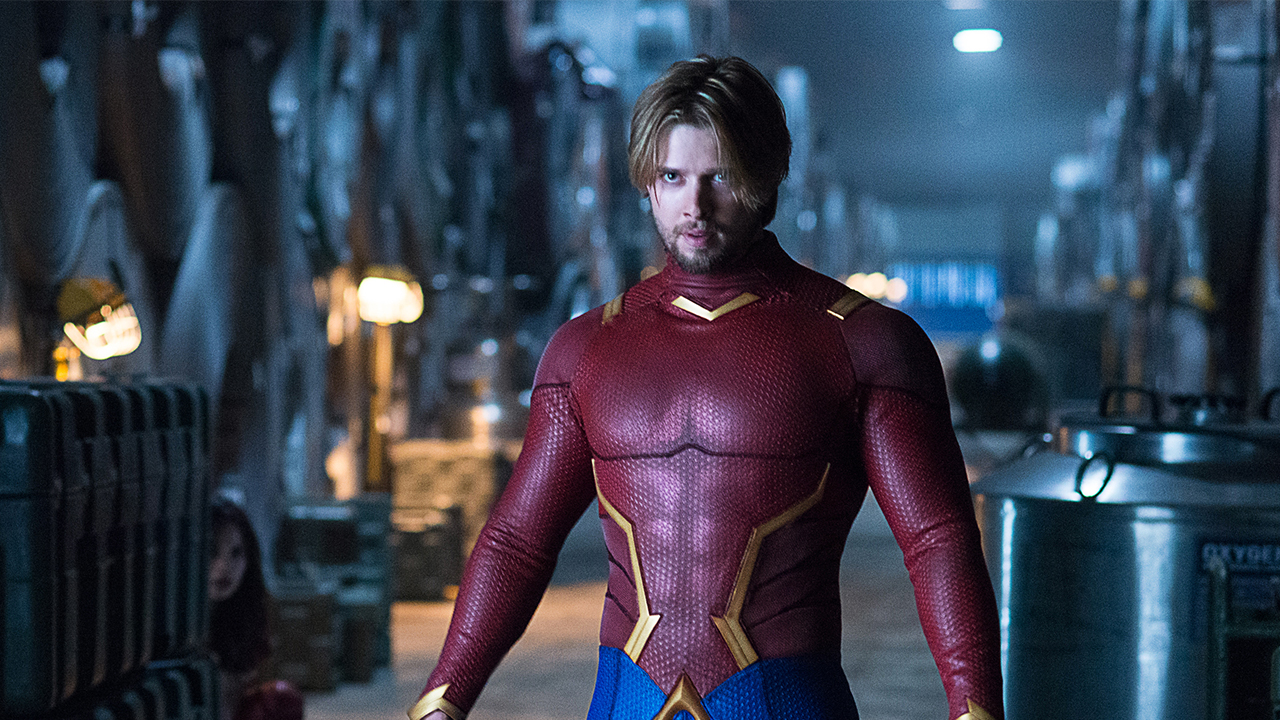 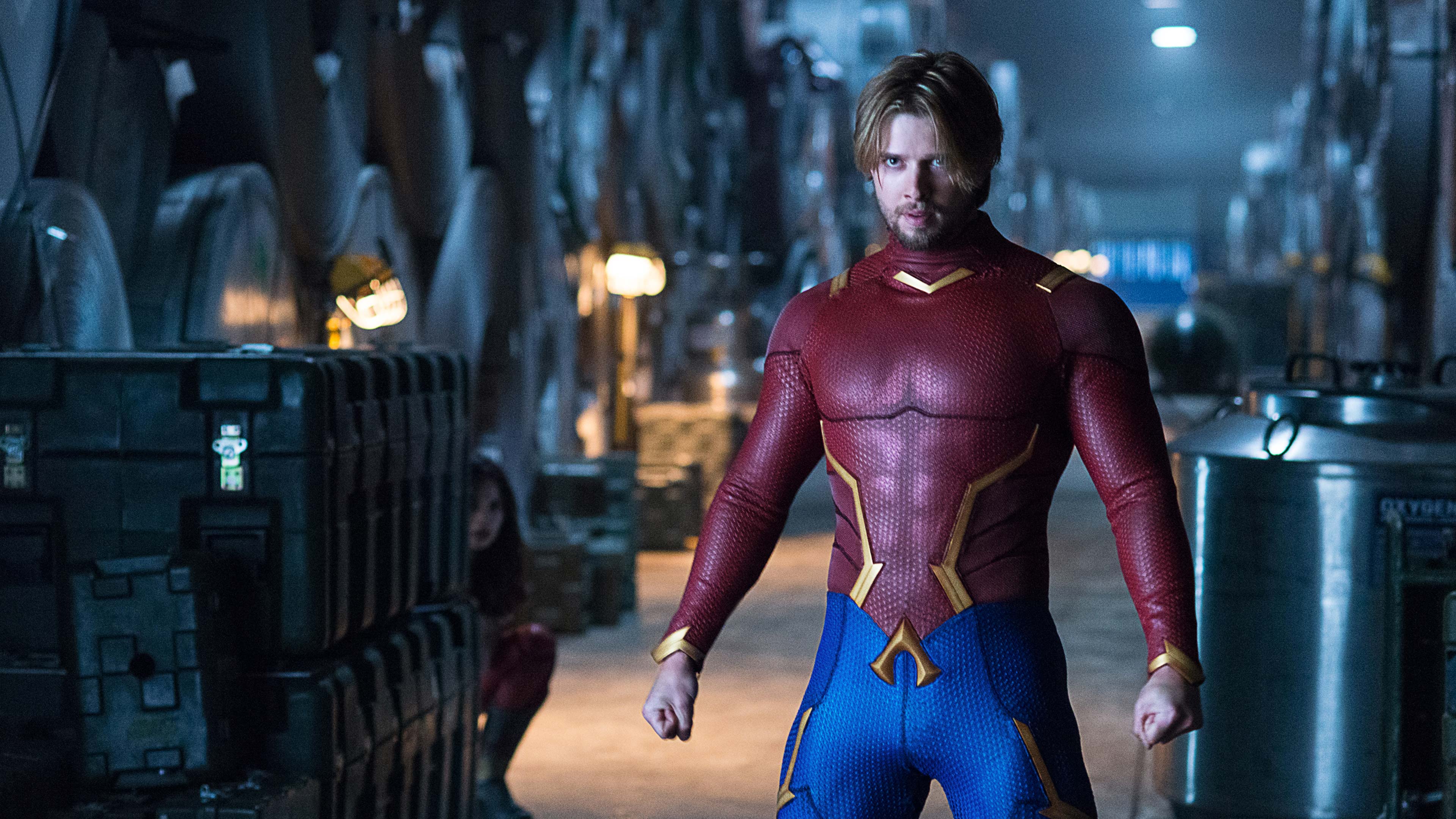 How Aqualad Went From Water Wuss to Aquastud

It’s Friday, and you know what that means – a new episode of DC Universe’s ‘Titans.’ This week’s episode flashes back to the group’s original roster, and introduces the live-action version of Aqualad! He’s hunky, he’s got gorgeous blonde locks and he’s stolen Wonder Girl’s heart. He’s the perfect complement to Jason Momoa’s Aquaman, and certaintly a far cry from the character’s wimpy roots. That’s right, we’re going to embarrass Aqualad a bit by looking back at his milksop beginnings, and how he eventually transformed into an Aquastud! 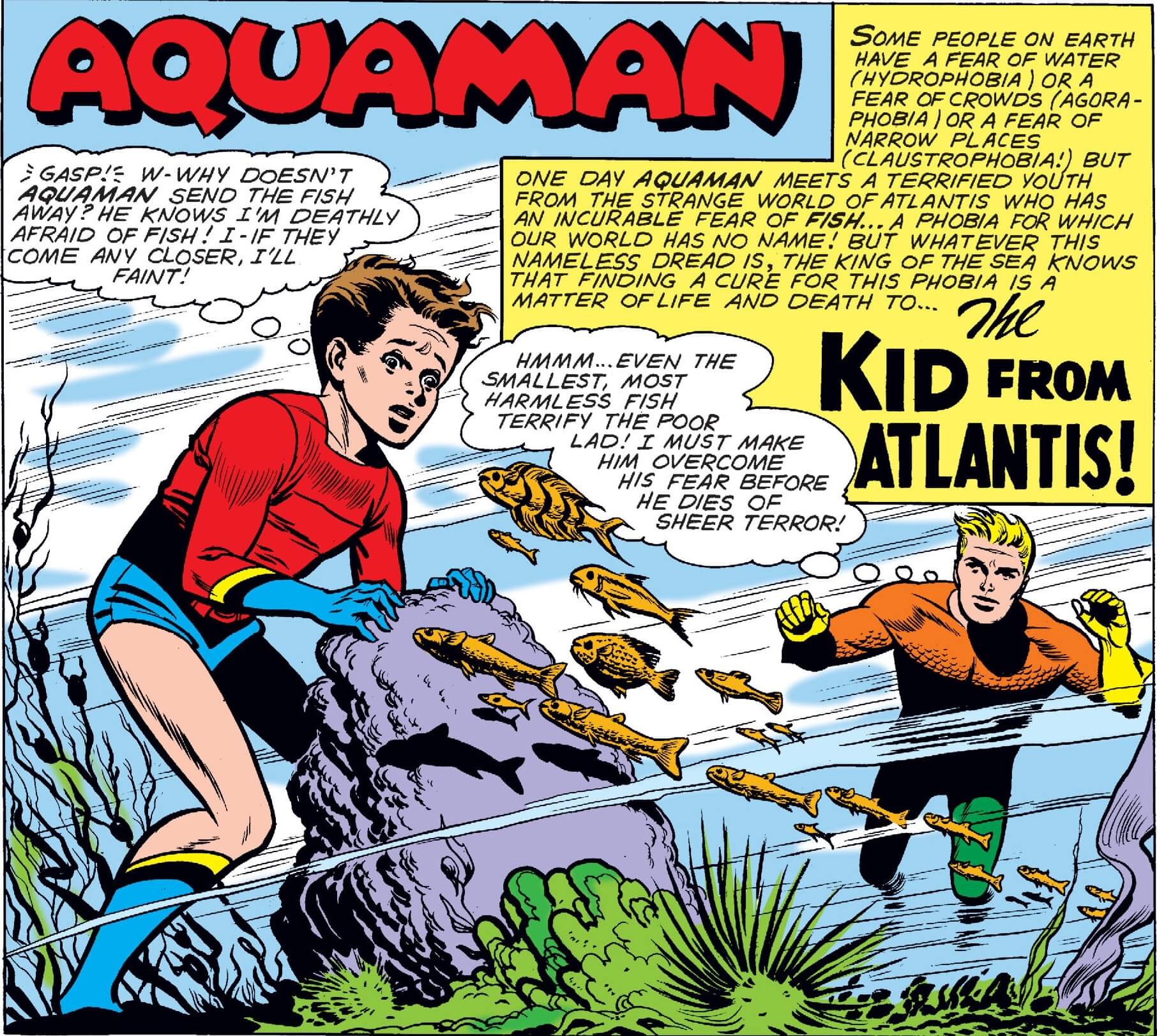 When Aquaman first met Aqualad in ‘Adventure Comics’ #269 (written by Robert Bernstein and penciled by Ramona Fradon) the boy had a bit of maturing to do. We won’t mince words with you – Aqualad was a bit of a wimp. He was afraid of fish, and not just large carnivorous fish, but the small harmless ones as well.

Look at him hiding behind the rock in the above image. If his Titans teammates could see this, they’d laugh him out of the tower! The story begins with Aquaman finding Aqualad petrified on the ocean’s surface. Aqualad explains that he’s an orphan who was exiled from Atlantis due to his extreme fear of fish. On the one hand, you have to be a special kind of wimp to be banished from a city due to your irrational fears, but it’s kind of cold hearted for the Atlanteans to exile an orphan that way. His parents are dead, give the kid therapy and understanding instead of sending him off to die. It was the Silver Age, we all had a lot of growing to do. We’re pretty sure that when Aquaman later became king of Atlantis, he ended the “exiling scared children” rituals. 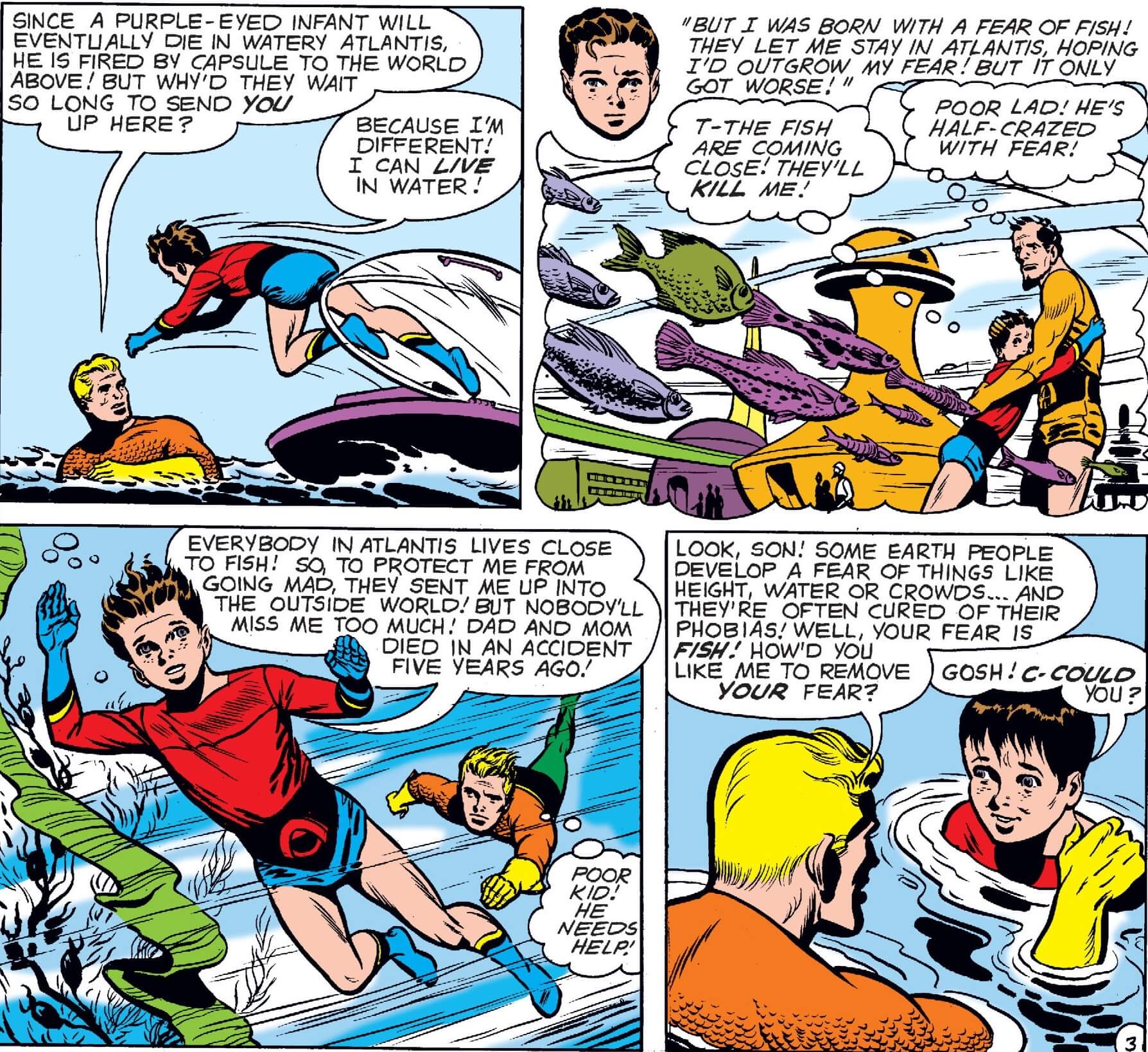 People like to give Silver Age Aquaman a hard time, but he was a real MVP in this story. He helped Aqualad overcome his fear of fish and made him his sidekick. It’s a good thing Aquaman helped him work through it, because being a fish themed superhero would be kind of hard if you’re afraid of them. 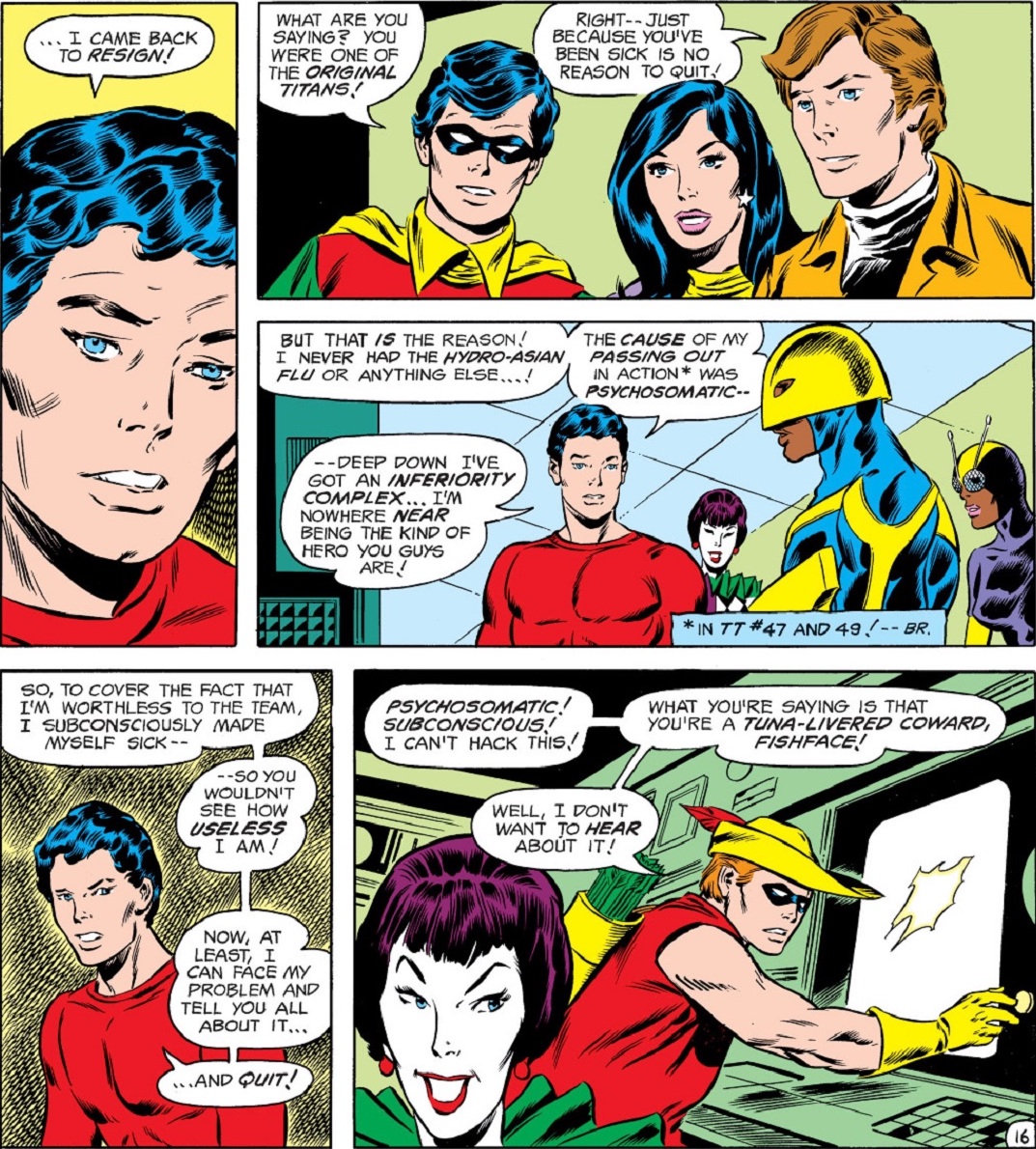 Aqualad later became a founding member of the Teen Titans along with Speedy, Wonder Girl, Robin and Kid Flash. Of the original Titans, Aqualad was the last member to receive their own first name. That’s right, although Aqualad first appeared in 1960, he didn’t have any other name until 1984’s ‘Tales of the Teen Titans’ #45 (story and art by Marv Wolfman and George Perez) first called him Garth 24 years later! Imagine not even having your own name. Aqualad’s early Teen Titans adventures were a bit hard on him, due to his inability to survive outside of water for more than 24 hours. While Atlanteans no longer have that limit, it was a serious handicap at the time, and made Garth feel useless alongside his teammates. You know all the jokes people once made about Aquaman being useless in the Justice League? Aqualad was aware of these jokes, and felt them in the Teen Titans as well, which caused him to resign from the group in 1977’s ‘Teen Titans’ #51 (written by Bob Rozakis and penciled by Don Heck).

It might seem like we’re just embarrassing poor Garth, but don’t be too hard on him. The other kid sidekicks have their own embarrassing back issues, it just took Aqualad a bit longer to bloom – and boy did he bloom! 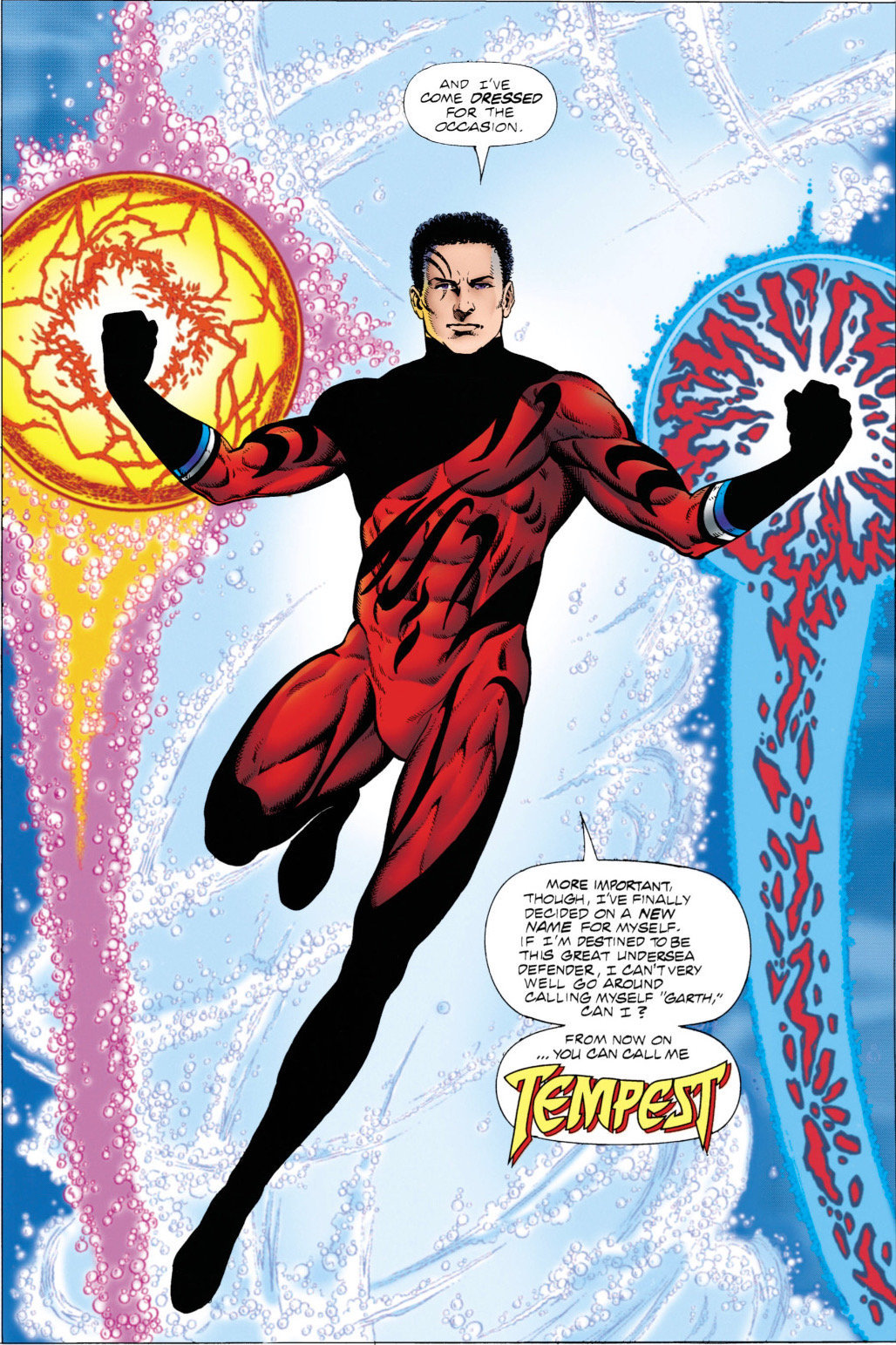 It was clear by the 1990’s that he had outgrown the name Aqualad. All of the other founding Titans had graduated to new identities already, and Gar was starting to look more muscular in his old outfit, and the ladies were beginning to notice. The cover to 1996’s ‘Aquaman’ #20 (written by Peter David, penciled by Marty Egeland and Alan Caldwell) proclaims “Don’t call him Aqualad anymore.” In the story, Garth sheds his old identity and costume, and revealed some new powers and new confidence, which he uses to flirt with Aquaman’s girlfriend Dolphin.

Thanks to his mage training, Garth now had sorcery powers and could do many things that Aquaman couldn’t. Garth could now shoot powerful energy blasts, teleport himself and other objects, use telekinesis and more! These new abilities and new direction led to him getting a new superhero name, Tempest, in the 1996 ‘Tempest’ limited series. 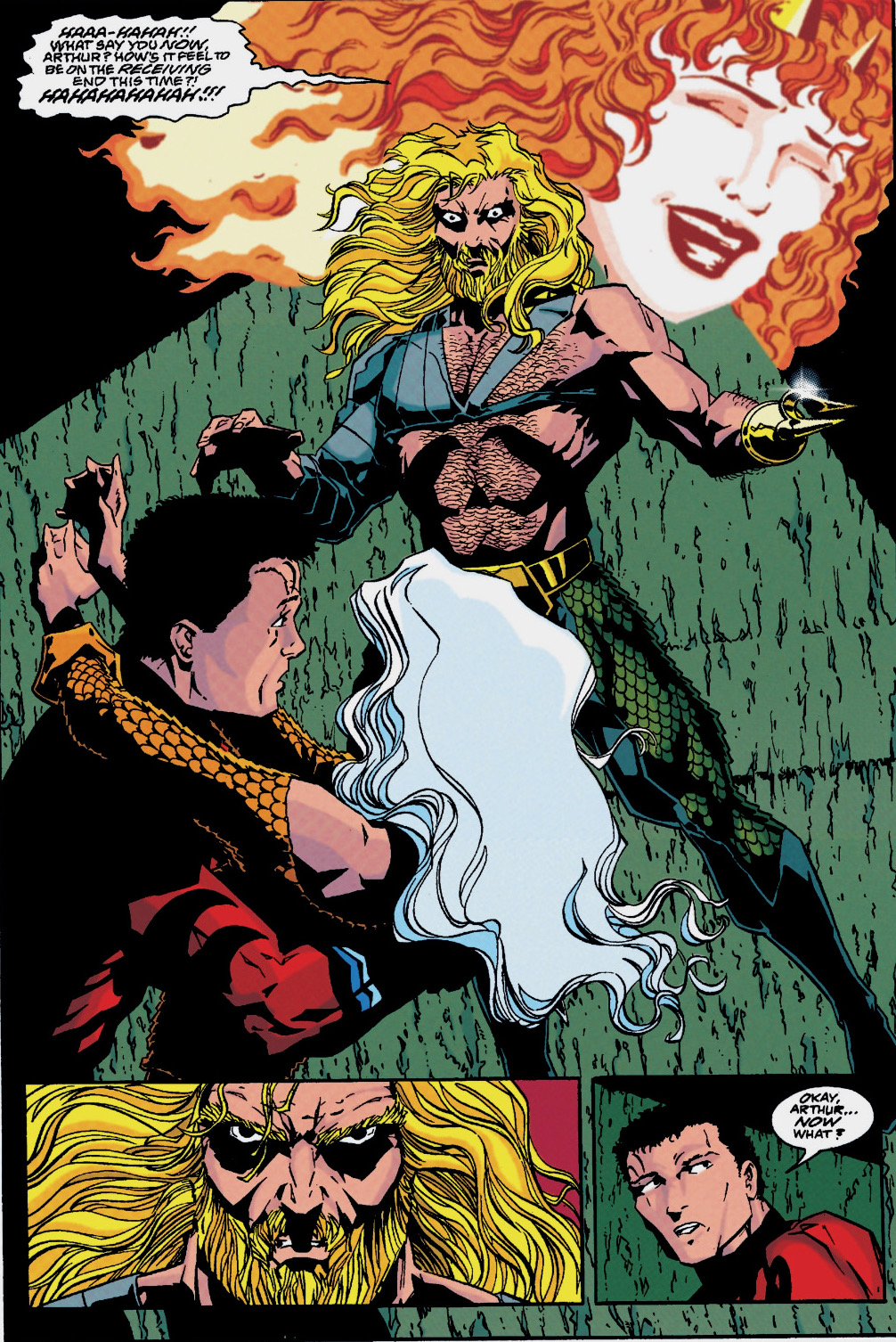 The man who was once called Aqualad proved that he left his wimpy ways behind in 1997’s ‘Aquaman’ #36 (written by Peter David and penciled by Jim Calafiore) when he stole Arthur’s girlfriend Dolphin! It’s important to note here that not only did Dolphin choose Garth over Arthur, but she did it during the 1990’s when Aquaman had his beautiful long hair, ripped chest and bad boy hook. Garth has some serious game! He’s a far cry from the quivering boy Aquaman rescued during the Silver Age! We can’t think of a better way to come full circle than being afraid of fish as a child, and marrying a woman named Dolphin as an adult. We bet Aquaman really regretted helping him overcome his fears then!

Fear of fish, or ichthyophobia, is a real diagnosis. If you’re someone who suffers from it, don’t feel bad. Aqualad was able to overcome it and become the studly Tempest. Conquering fears and growing is one of the pillars of the DC Universe, so maybe we shouldn’t laugh at Aqualad, but learn from him instead.

Are you excited to see Aqualad on TITANS? Let us know on our Community!