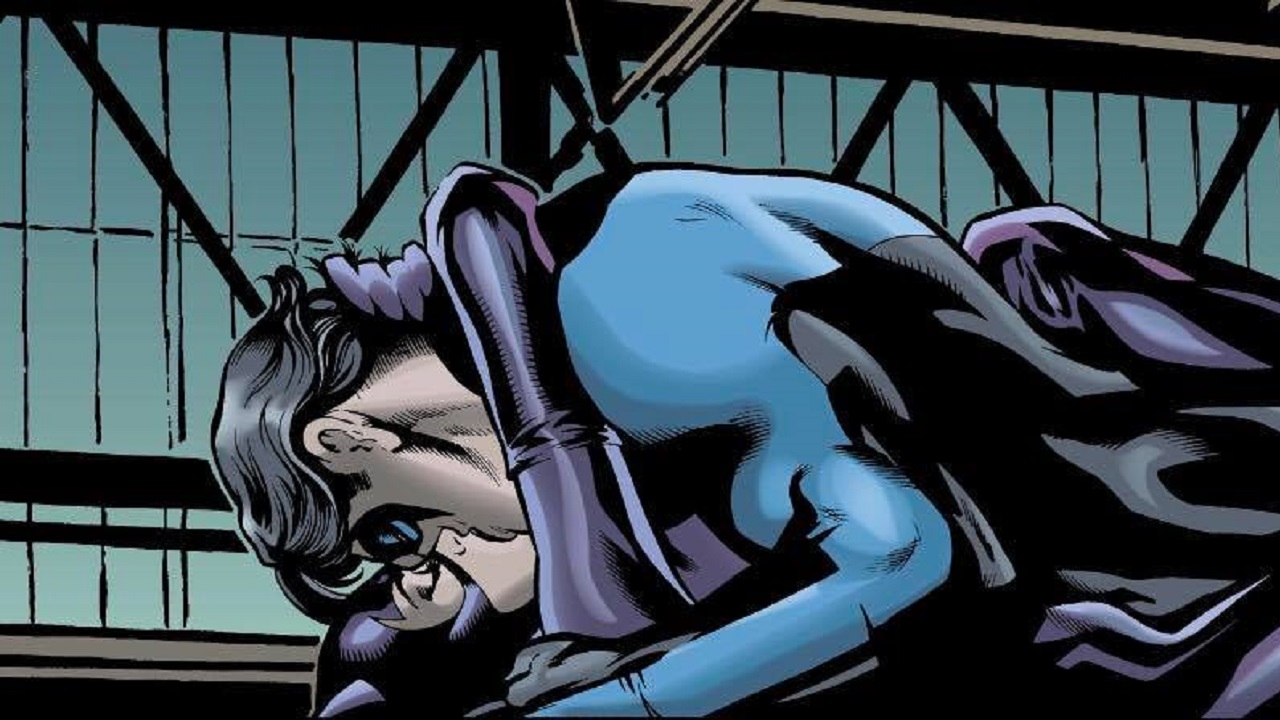 As we've said before, everybody loves Dick! When you’re fighting crime on the streets, Dick is a great ally to have by your side. But when it comes to your love life, well, Dick is a little less trustworthy. It turns out that Nightwing has no boundaries when it comes to romantic relationships, and could very well make a play for your true love. Yes, being a great hero doesn’t always mean being an ethical lover. Here are 5 times Nightwing stole someone else’s girlfriend!

TAKE A BITE OUT OF JOURNALISM 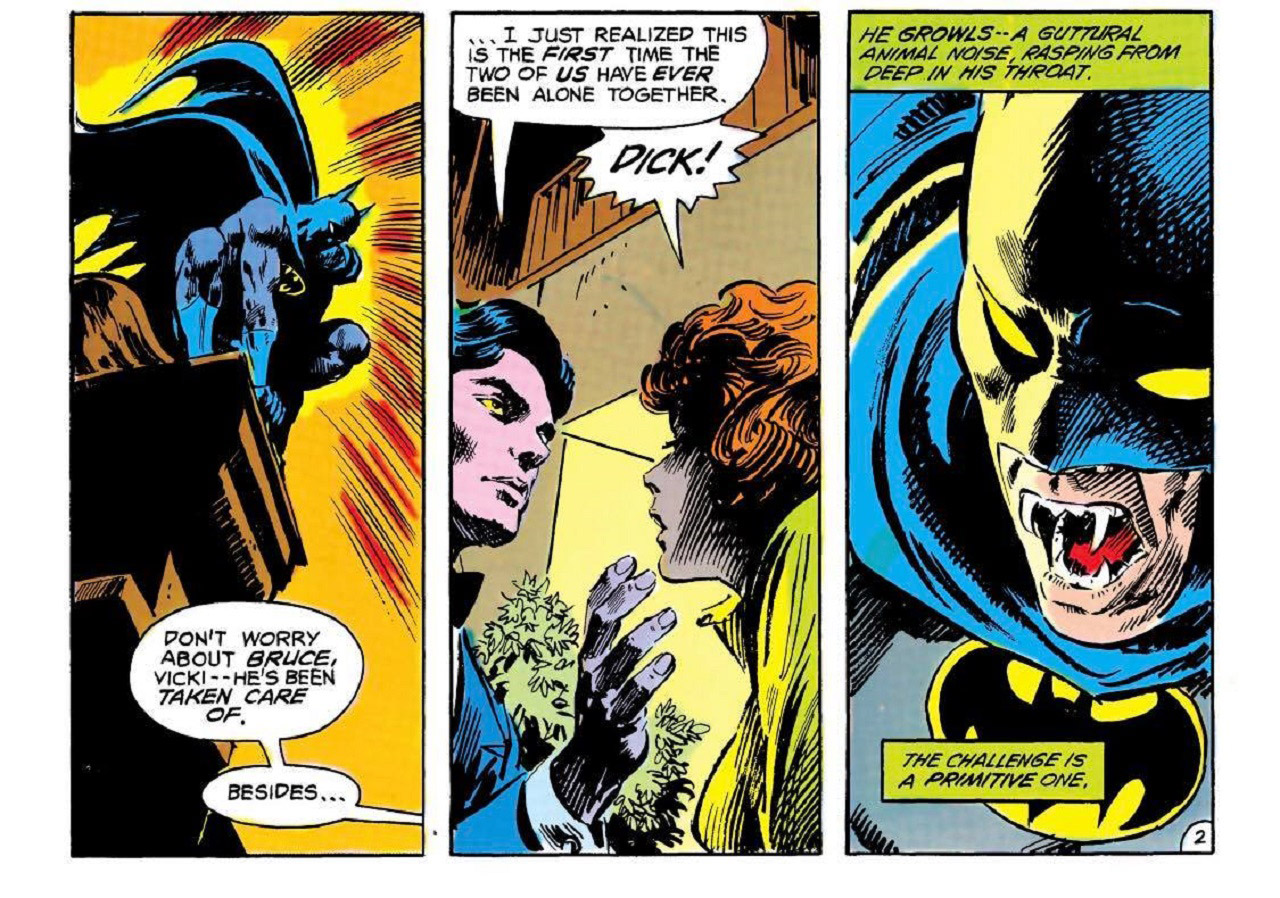 Bruce Wayne has a habit of disappearing during dates, which gives opportunistic Casanovas like Dick Grayson a chance to make their move. In Batman #351, Dick gave Vicki Vale a ride home after Bruce ghosted her. As he walked the photojournalist to her door, Dick told Ms. Vale that the two of them had never been alone together. Vicki, who had known Dick since he was a young boy, was mortified and rebuffed his advances. Batman, who was watching from a nearby rooftop, angrily attacked Dick once Vicki went inside. It’s worth mentioning that Bruce and Dick were both vampires at the time, and Dick had been trying to turn Vicki into a vampire too. Did we bury the lead?

Who wins in a fight between Batman and Superman? According to 1952’s Superman #76, it’s Robin the Boy Wonder -- and he doesn’t even have to use Martha as the safe word! The Man of Steel and the Dark Knight’s first team-up story is filled with numerous scenes of the world’s finest heroes arguing over who Lois was thirstier for – as if there wasn’t anything more important to discuss. By the end of the story, Batman and Superman were shocked to find that Lois had chosen Robin. We don’t see how this moment unfolded, but Dick must’ve been really convincing to get her to choose him over the Man of Steel and the Caped Crusader. The only other teenager Lois knew was Jimmy, so Dick must’ve looked really good by comparison. Of course the "date" was an innocent one -- but that didn’t stop them from later faking an engagement in Superman’s Girlfriend Lois Lane #6. 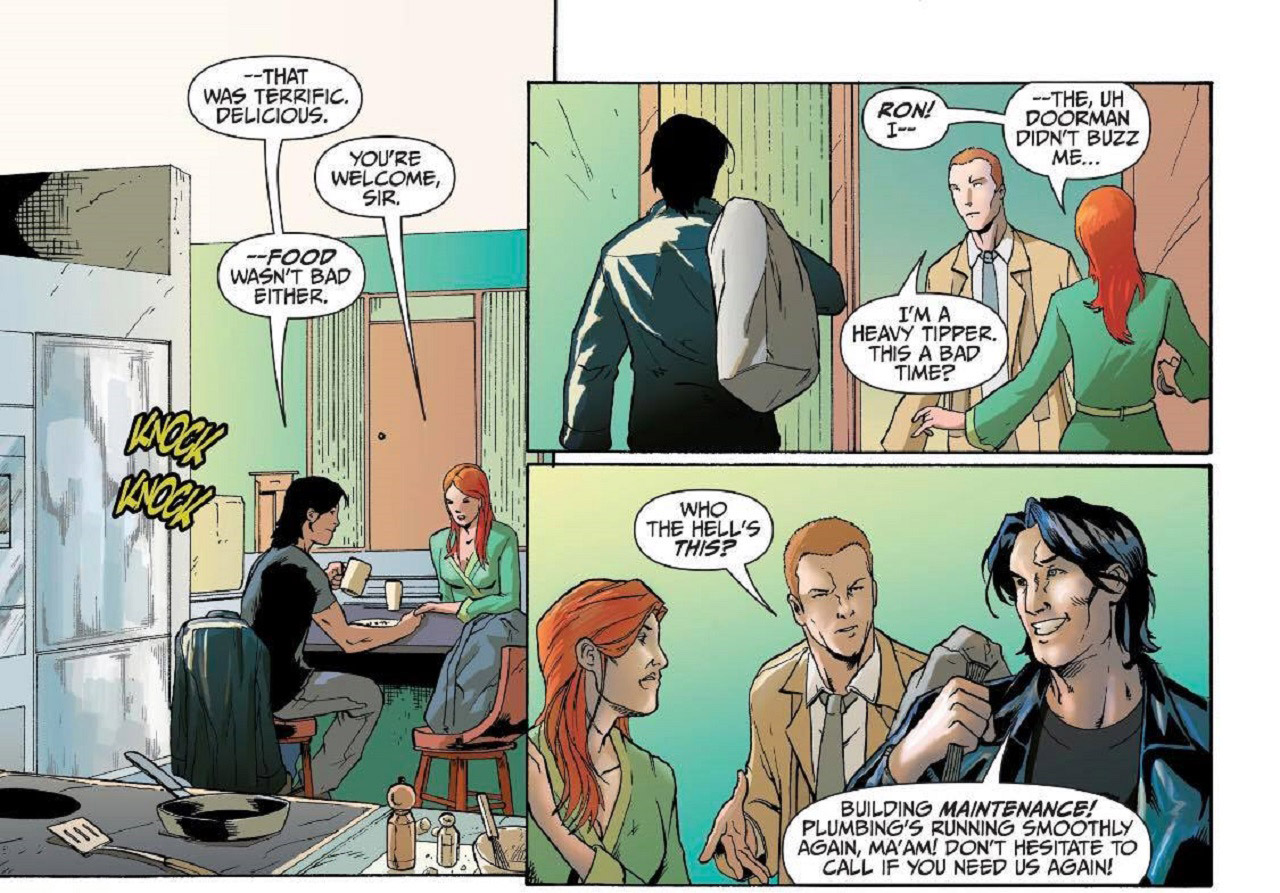 Do you know what your significant other is doing at home while you’re at work? You’d better hope it’s laundry, because Nightwing has been known to make house calls. In Nightwing #118 a man named Ron surprised his girlfriend Cheyanne only to find her having breakfast with Dick – in her bathrobe. Dick just smiled and claimed he was the maintenance man, as he confidently strolled out of the apartment without a care in the world. For what it’s worth Ron was an abusive jerk, but we still have to marvel at Dick’s bold flex. 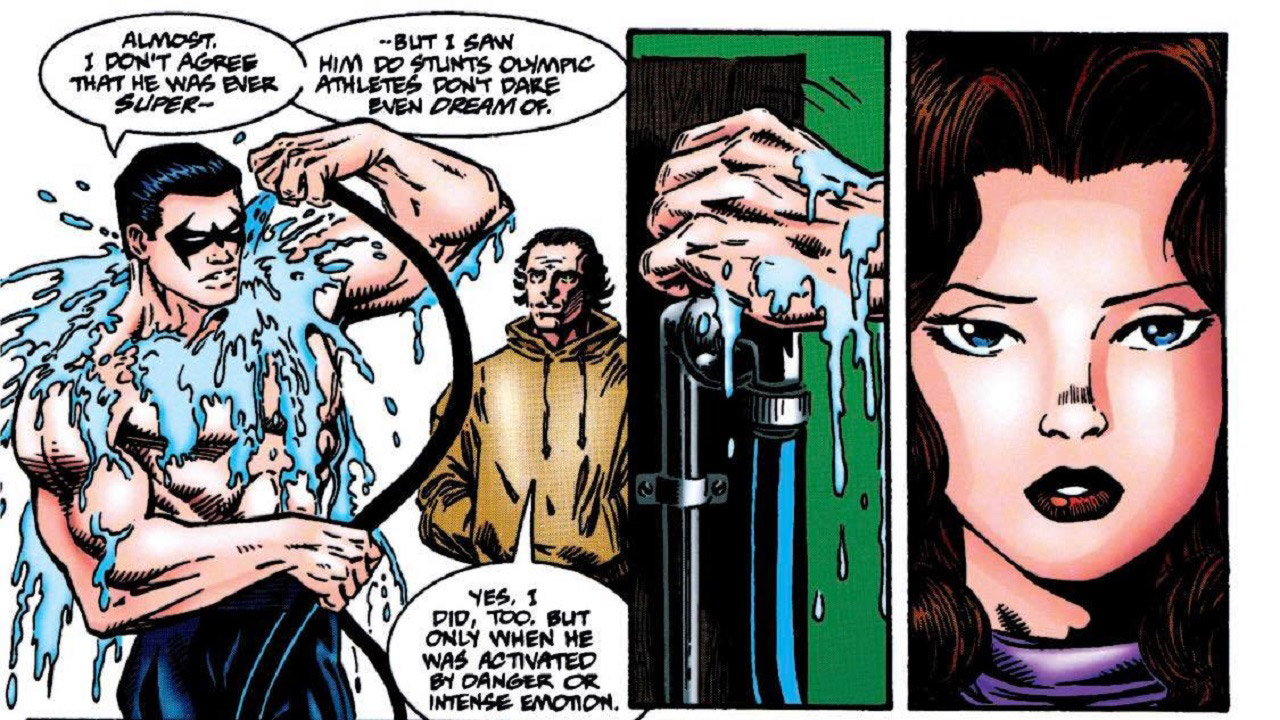 Jean-Paul Valley is a bit shy with the ladies, so he took his time when it came to moving things along with his love interest Lilhy. Nightwing is anything but shy, and did everything he could to woo Lilhy. After a rigorous training session with Azrael, Dick removed his shirt and began hosing his chest off as Lilhy watched. Once this shameless performance was over, Lilhy walked Nightwing to his bike and shyly asked for a kiss, and the former Boy Wonder happily obliged. Hosing himself off was a cheap move, but when it comes to love triangles Nightwing isn’t afraid to fight dirty.

CAT GOT YOUR TONGUE 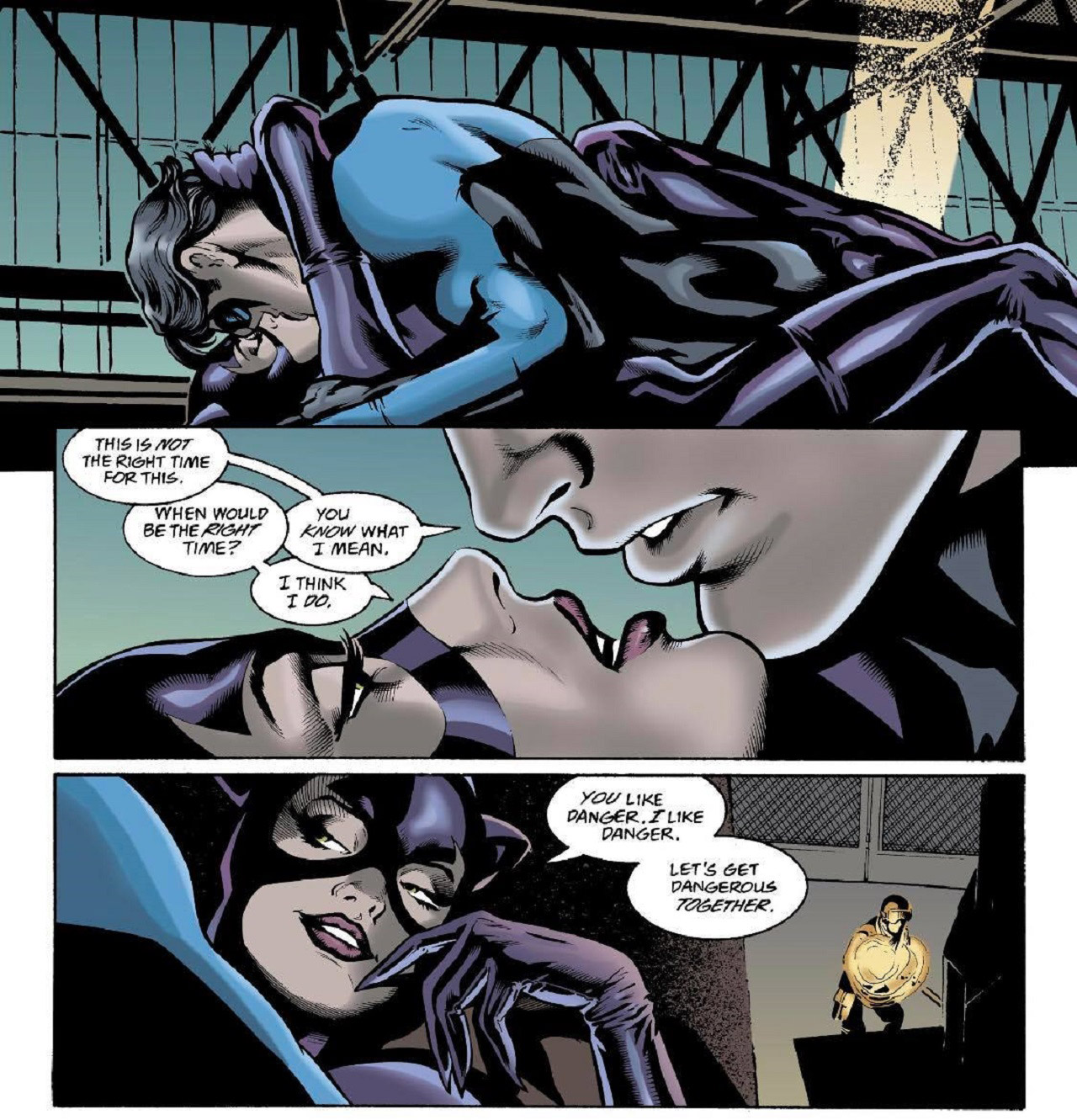 The love story between Batman and Catwoman is legendary, but for some reason the two lovebirds have never been able to make it work. Could it be that there’s another man in Selina’s life? The cover to DC’s Crimes of Passion one-shot special has Batman catching Nightwing and Catwoman together, and after seeing the previous entries on this list, the idea doesn’t seem so farfetched. After all, Catwoman is a fan of beautiful objects, and it doesn’t get much more attractive than Nightwing. In fact, in 2000’s Nightwing #52 Selina makes a play for the former Boy Wonder, calling him her “kitty treat.” Dick fights off her advances, but only half-heartedly, and the two briefly make out. Does Batman know? Does the knowledge that his former pupil kissed his one true love keep the Dark Knight up at night? Perhaps Batman’s recent crimefighting career is largely a distraction so he doesn’t have to come to terms with the fact that his surrogate son and ex-fiancée have shared a passionate moment. Either way, it’s clear that nobody is safe from Dick Grayson’s charm.

Is Nightwing an overrated meathead or the quintessential heartthrob of the DC Universe? Let us know in our Community!