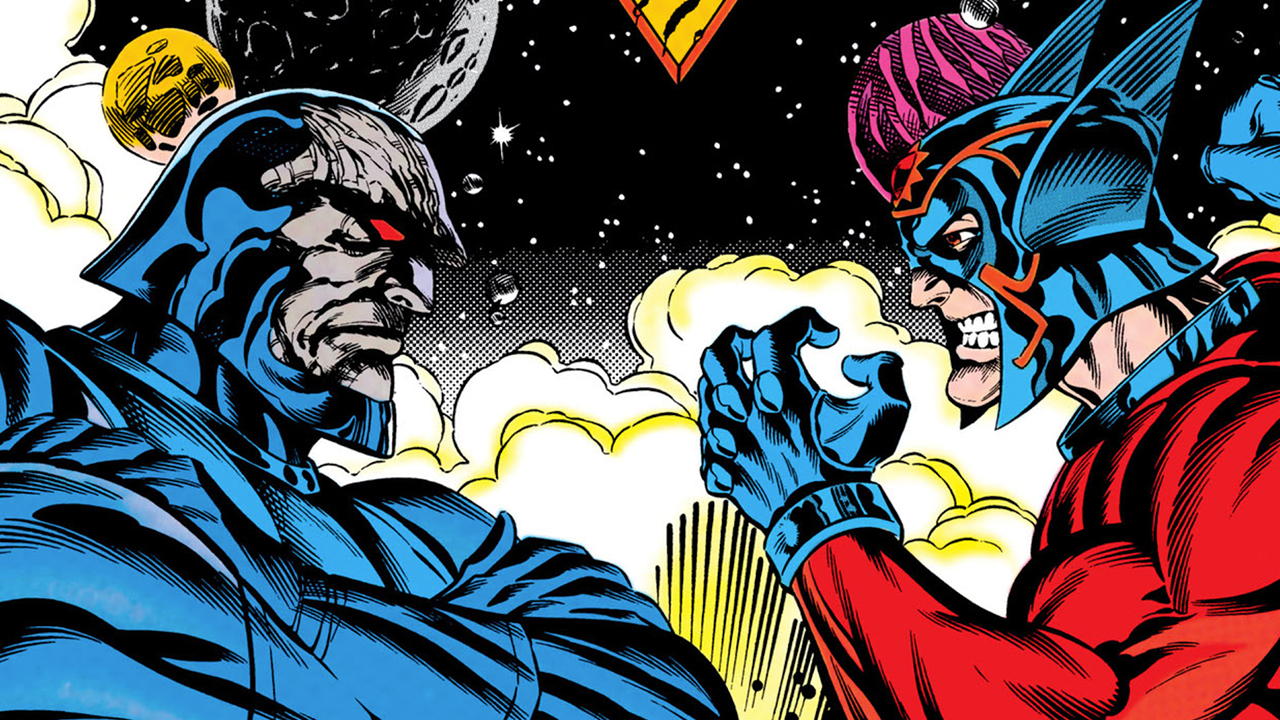 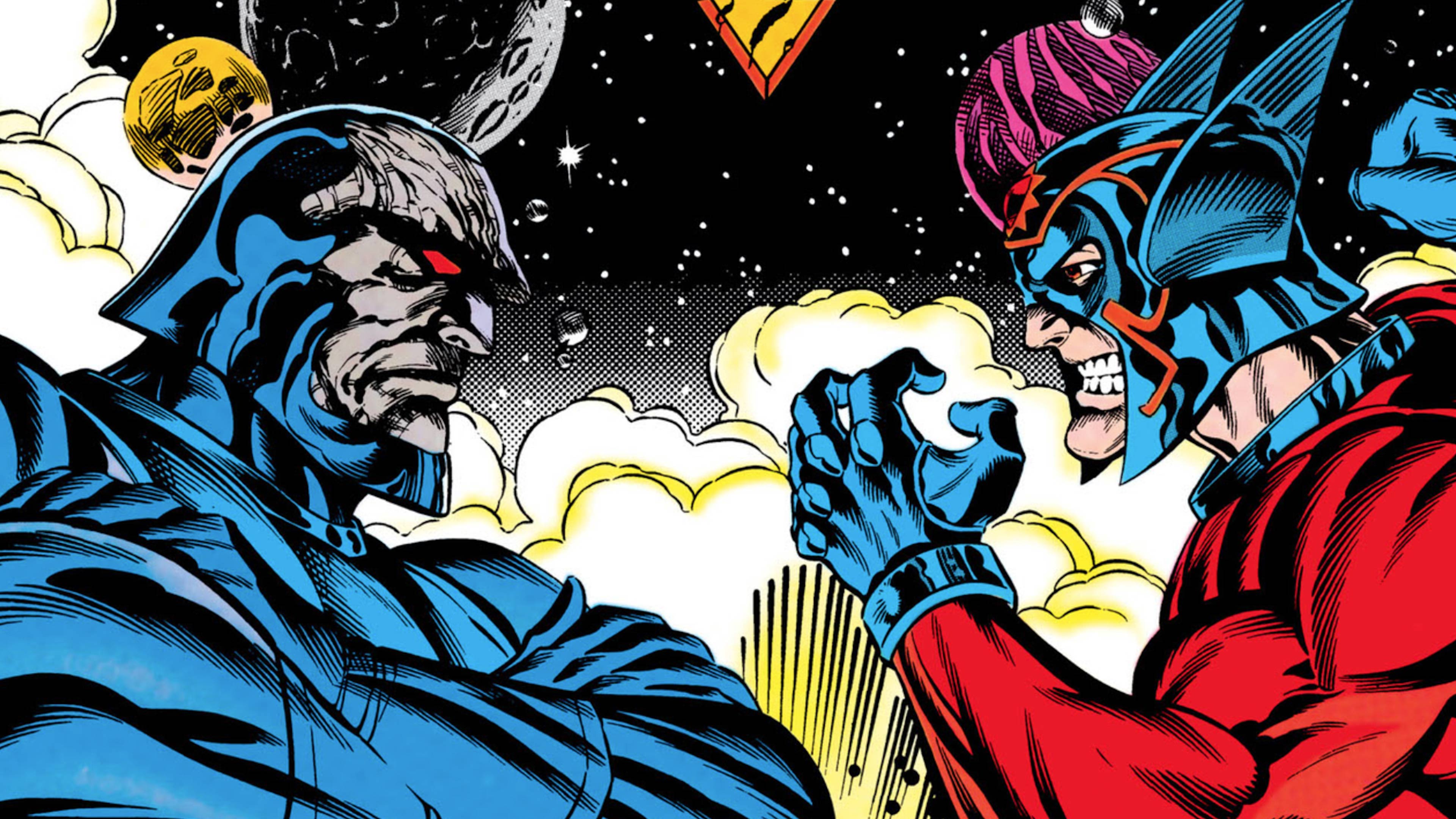 Father’s Day is a time to honor the greatest dads of the DC Universe – but not these guys! Fatherhood is a great responsibility, but some dads would rather look out for their own self-interest. Their idea of fatherly bonding is destroying their children for their own amusement, but what else would you expect from super-villains? When Father’s Day cards are mailed out each year, it’s a safe bet these guys won’t be receiving any. Here are 7 of DC’s worst dads… 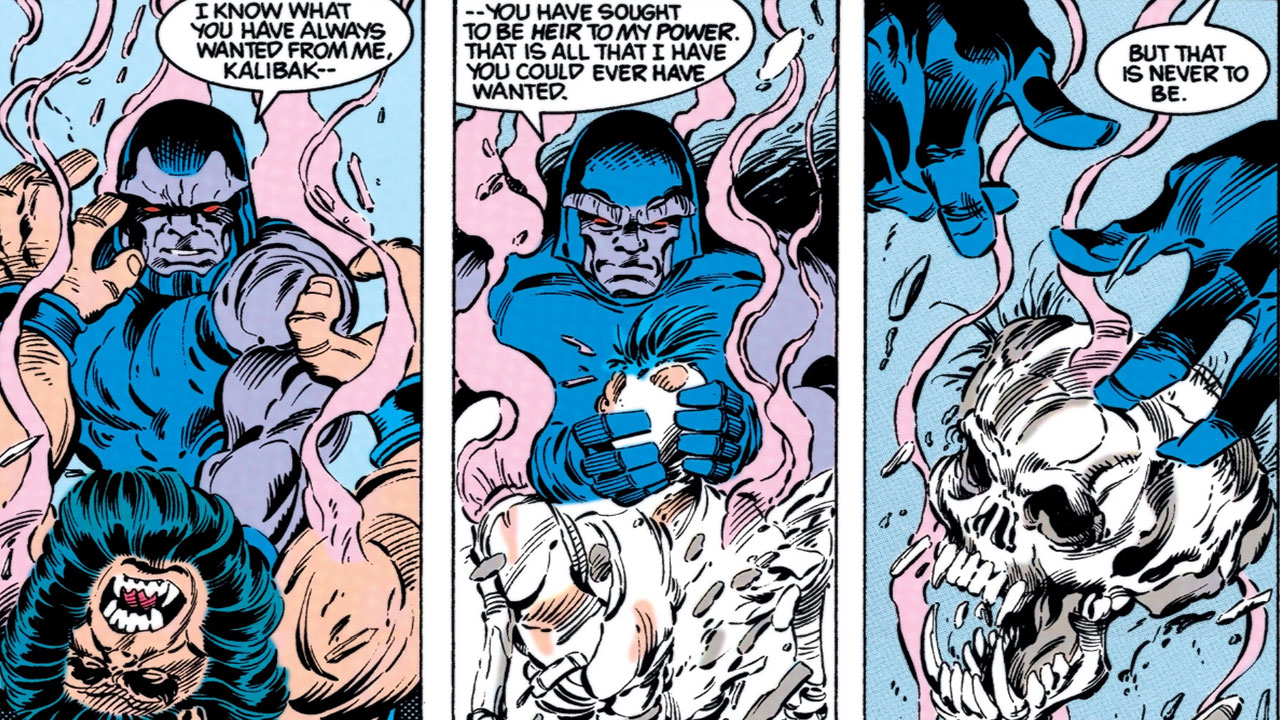 FATHERLY FAILINGS: Darkseid’s relationship with his son Orion got off on the wrong foot when the warlord traded the infant for a peace pact. Orion grew up on New Genesis and fought against his father’s forces on Apokolips. While Darkseid has some respect for his sons’ skills, that hasn’t stopped him from constantly trying to kill him. Orion stands in the way of Darkseid’s plans for unlimited power, therefore his son must die. Although the obedient warrior Kalibak is the type of son Darkseid should want, he doesn’t treat him with much respect. Darkseid constantly belittles Kalibak and once reduced him to ashes as punishment for his failures. After killing Kalibak, Darkseid revived his sycophant son, only so they can repeat the toxic cycle again. It’s an unusual father-son activity, but Darkseid isn’t a usual father. The bloodthirsty Grayven has also fallen victim to his father’s temper. Darkseid once violently punished his son Grayven for failing to defeat Superman, which is a bit unfair since he hasn’t been able to stop the Man of Steel either. 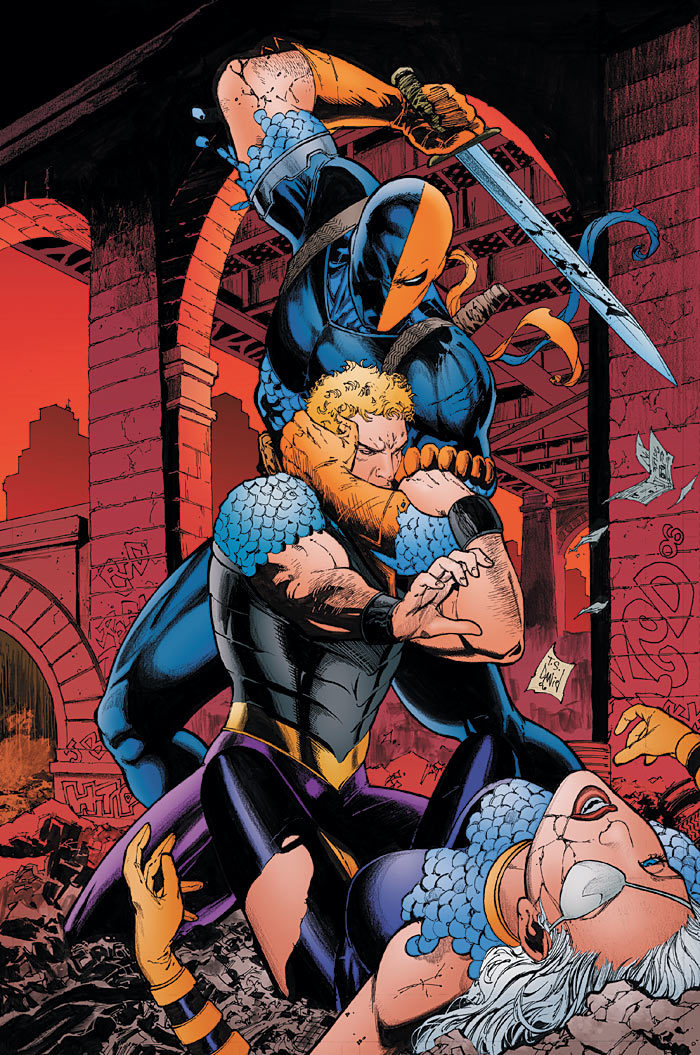 FATHERLY FAILINGS: Slade Wilson doesn’t have a great track record with his children. As a mercenary, Slade’s lifestyle didn’t leave room for much parenting, and his missions sometimes put him up against his own children. His oldest son Grant died trying to emulate his father. His son Joseph has the power to jump inside other people’s bodies and uses it to fight alongside the Teen Titans as the superhero called Jericho. While his son was under Trigon’s demonic influence, Slade stabbed him through the back with his sword. Joseph retaliated by jumping into his father’s body and forced him to murder his best friend Wintergreen. Typical father and son stuff. Slade’s relationship with his daughter Rose isn’t much better. Disgusted by her heroic nature, Slade forced his daughter to ingest the strength enhancing formula that powered him, which corrupted Rose and turned her evil. When Rose appeared morally conflicted, Slade chastised her until she gouged out her own eye to prove she could be just like him. Slade then placed a piece of Kryptonite in his daughter’s empty socket. Rose was horrified when she learned that the radioactive rock was slowly poisoning her, causing her to angrily leave her father. Slade Wilson may be the world’s greatest mercenary but getting along with his kids is a challenge he can’t seem to overcome. 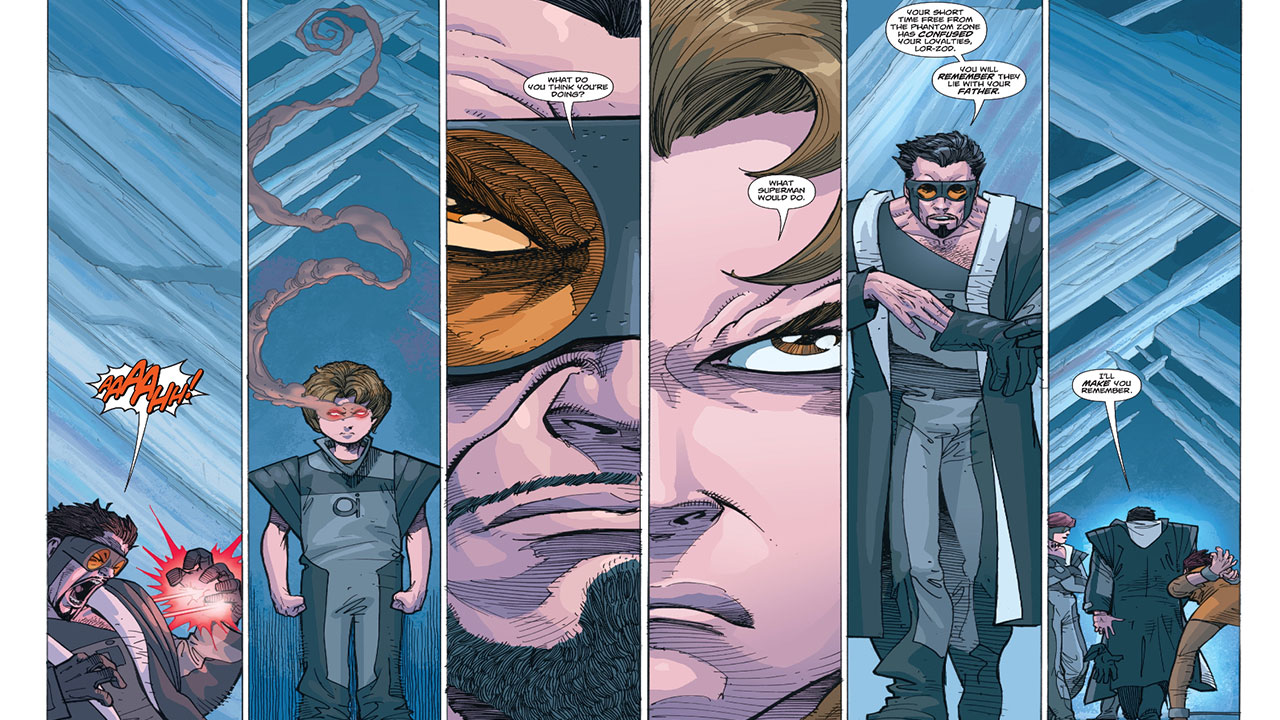 FATHERLY FAILINGS: Parents each have their own reasons for wanting to have kids, but usually it’s so they can add more love to their homes. For General Zod, having a son was just a creative way to stage a prison break. While he was trapped in the Phantom Zone, the villainous Zod and his mate Ursa conceived a son. Since he was conceived and birthed within the Phantom Zone, Lor-Zod was immune to the timeless effects of the dimensional prison. Lor-Zod was abused by his parents, who made it clear that he only existed so they could escape their tortured captivity. Using a rocket, Zod sent his son from the Phantom Zone and into Earth. Due to his unique biology, Lor-Zod was able to leave the Zone, and act as a doorway to his parents. Once he arrived on Earth, Lor-Zod was adopted by Lois Lane and Clark Kent, living a blissful life under the name Chris Kent. Sadly, Zod wouldn’t let his son have a happy ending, and used the doorway to escape the Phantom Zone. Once he was out, Zod and Ursa caught up with their son and continued their abuse of him. Lor-Zod used his powers to fight back, but his parents were indigent.  Zod threatened to kill his son once he outlived his usefulness, flippantly telling Superman, “I can always make another.” Lor-Zod was able to trap his parents in the Phantom Zone again but was forced to follow them or the doorway would remain open. Lor-Zod probably won’t be giving his dad any hugs on Father’s Day. 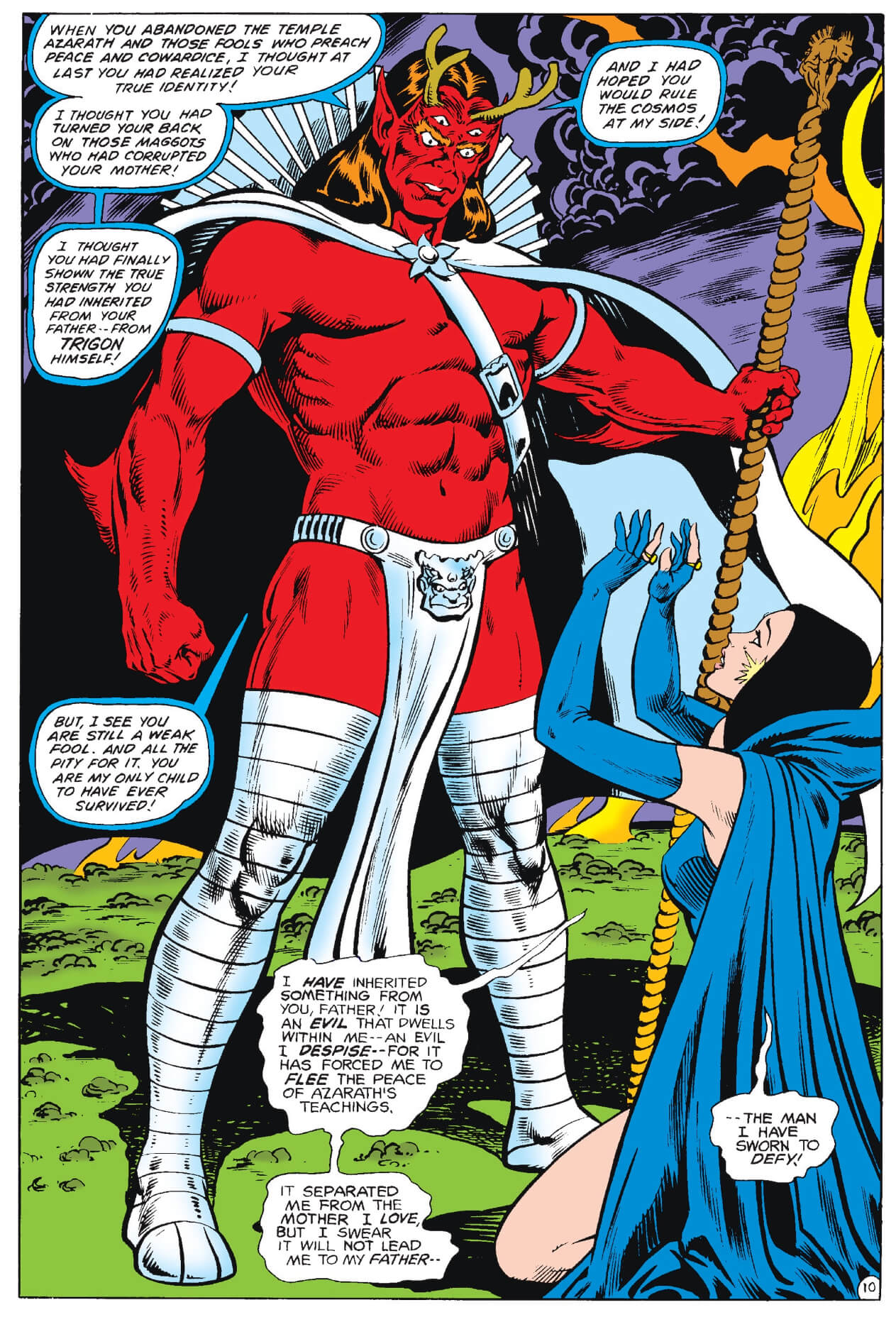 UNLUCKY OFFSPRING: Raven and a crew of demonic offspring

FATHERLY FAILINGS: It’s common for fathers and daughters to clash over ideological differences, but Trigon and Raven take things to a new level. The demonic Trigon has taken over many dimensions and wants to add Earth to his collection. His daughter Raven is part human and an empath, and she’s not too keen on seeing humanity enslaved or destroyed by her father. As a result, Raven formed the New Teen Titans to push back against Trigon’s assault. Trigon would love for his daughter to go into the family business and has used his powers to demonically corrupt her on more than one occasion. Raven’s light is one of the only things that can repel her father, but the pressure can be overwhelming. Since world domination is more important than fatherhood, Trigon has no issues trying to destroy Raven or her friends when they get in the way of his plans. His evil campaign can also be seen on the live-action ‘Titans’ television series, where Trigon currently has the upper-hand. Why settle for a Father’s Day card when you can have the entire world? 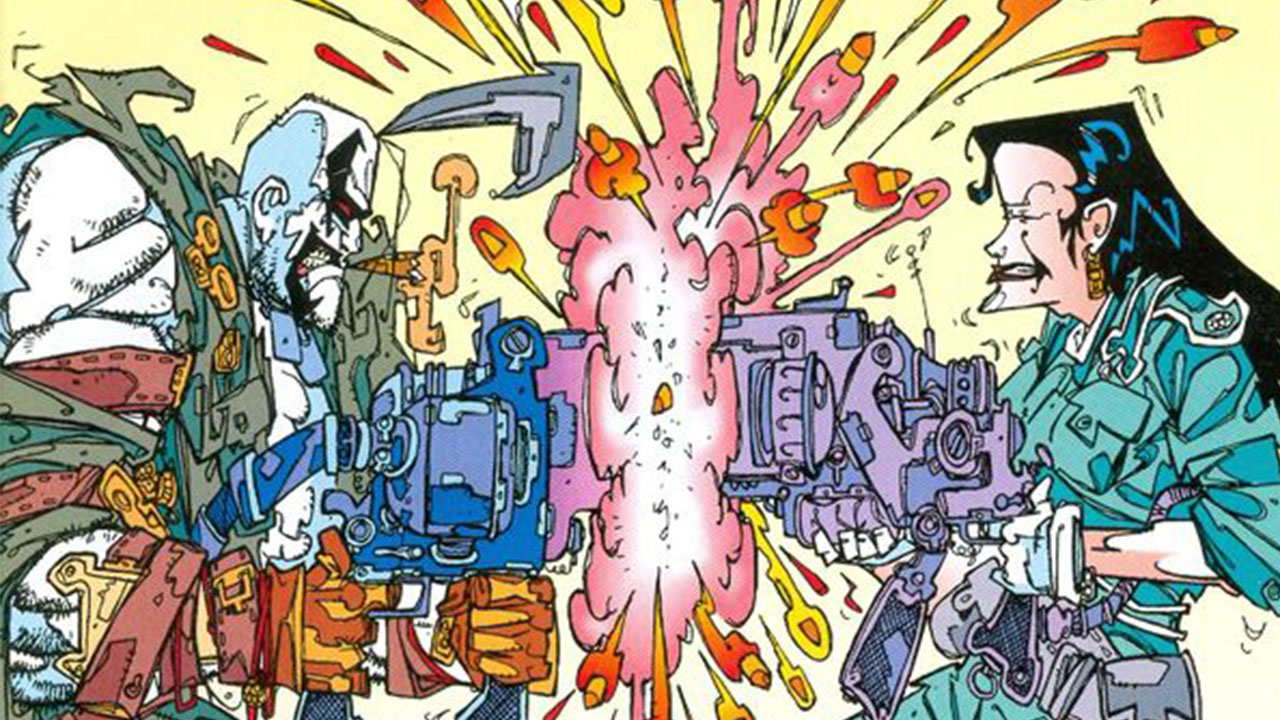 UNLUCKY OFFSPRING: Su-Lehmon, Crush and an army of hundreds of angry spawns

FATHERLY FAILINGS: Some kids despise their fathers, but Lobo’s children really hate him! They have so much contempt for their father that they once banded together as a giant army to kill him. During the mini-series ‘Lobo: Infanticide’, a large gathering of his offspring bonded over their mutual hatred for the Main Man. Evidentially, he didn’t treat their mothers too well, and has been a deadbeat dad and a general horrible person. Su-Lehmon led 200 of her siblings in a sneak attack on their father. Lobo showed no fatherly feelings towards his bastard children and murdered them one by one for hours. When Su-Lehmon was the last one standing, Lobo finished her off with a mega-fart explosion. Consider it a deadly version of a dad saying, “pull my finger.” Currently Lobo has a teenage daughter named Crush, who serves as a member of Damian Wayne’s Teen Titans. She and her old man are staying out of one another’s way, and that’s probably for the best. 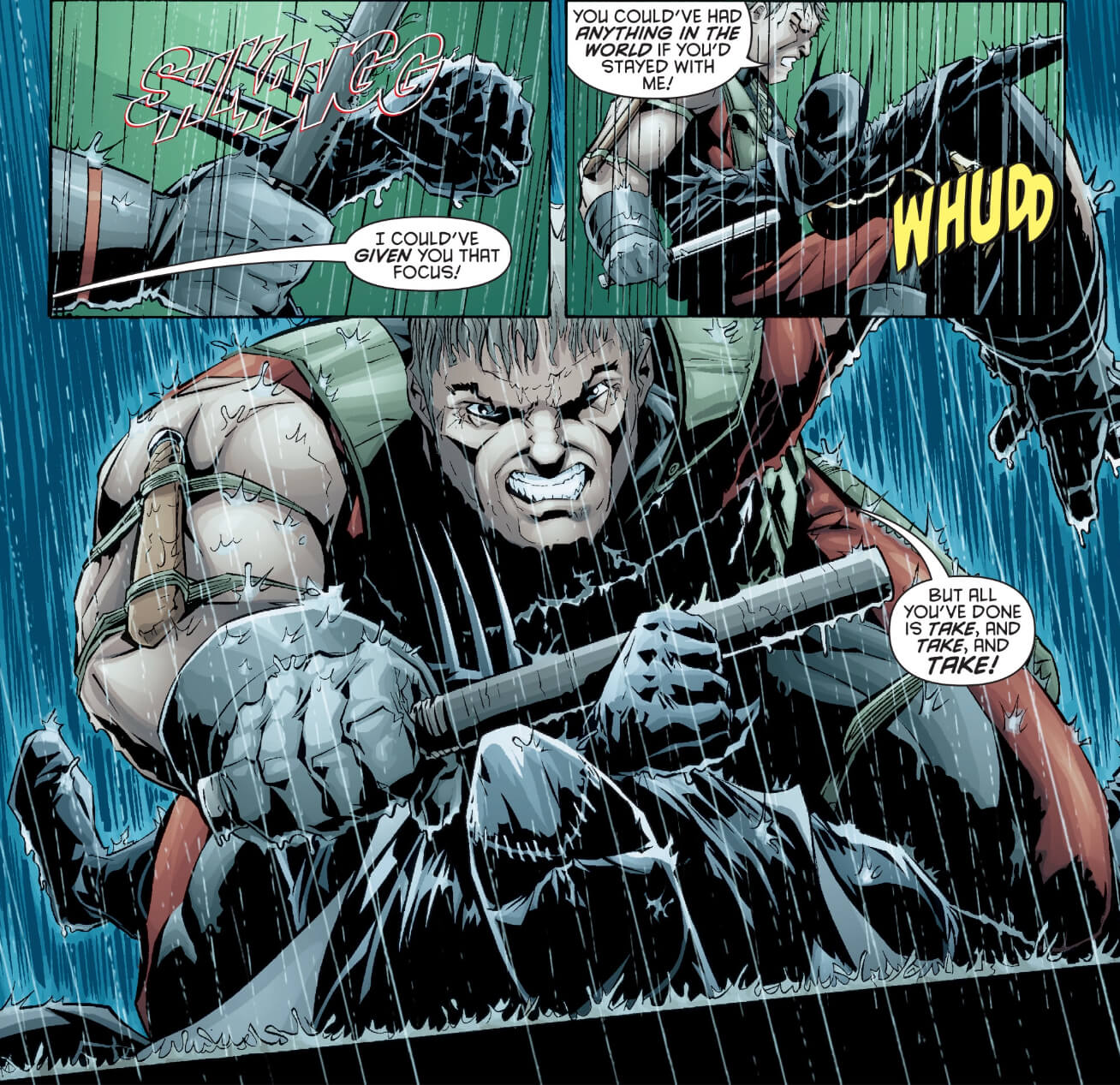 FATHERLY FAILINGS: Some fathers will help their daughters learn to tie their shoes or read, but David Cain has a different parenting style. The infamous assassin raised his daughter Cassandra to be a weapon, and that meant having an untraditional childhood. While other little girls were jumping rope, Cassandra was leaping over knifes in rigorous training exercises. When Cain was disappointed with Cassandra’s performance, he would shoot her. Her childhood was so abnormal that she wasn’t taught how to speak. Instead, Cain wanted violence to be the only language his daughter used. She didn’t even know when her birthday was until she was almost an adult. What kind of father deprives their child of a birthday party? Cassandra eventually rebelled, and joined Batman’s team as Batgirl, and later Orphan. As a vigilante, she’s fought back against her father many times, and he kind of deserves it – seriously, who doesn’t let their daughter have a birthday party? 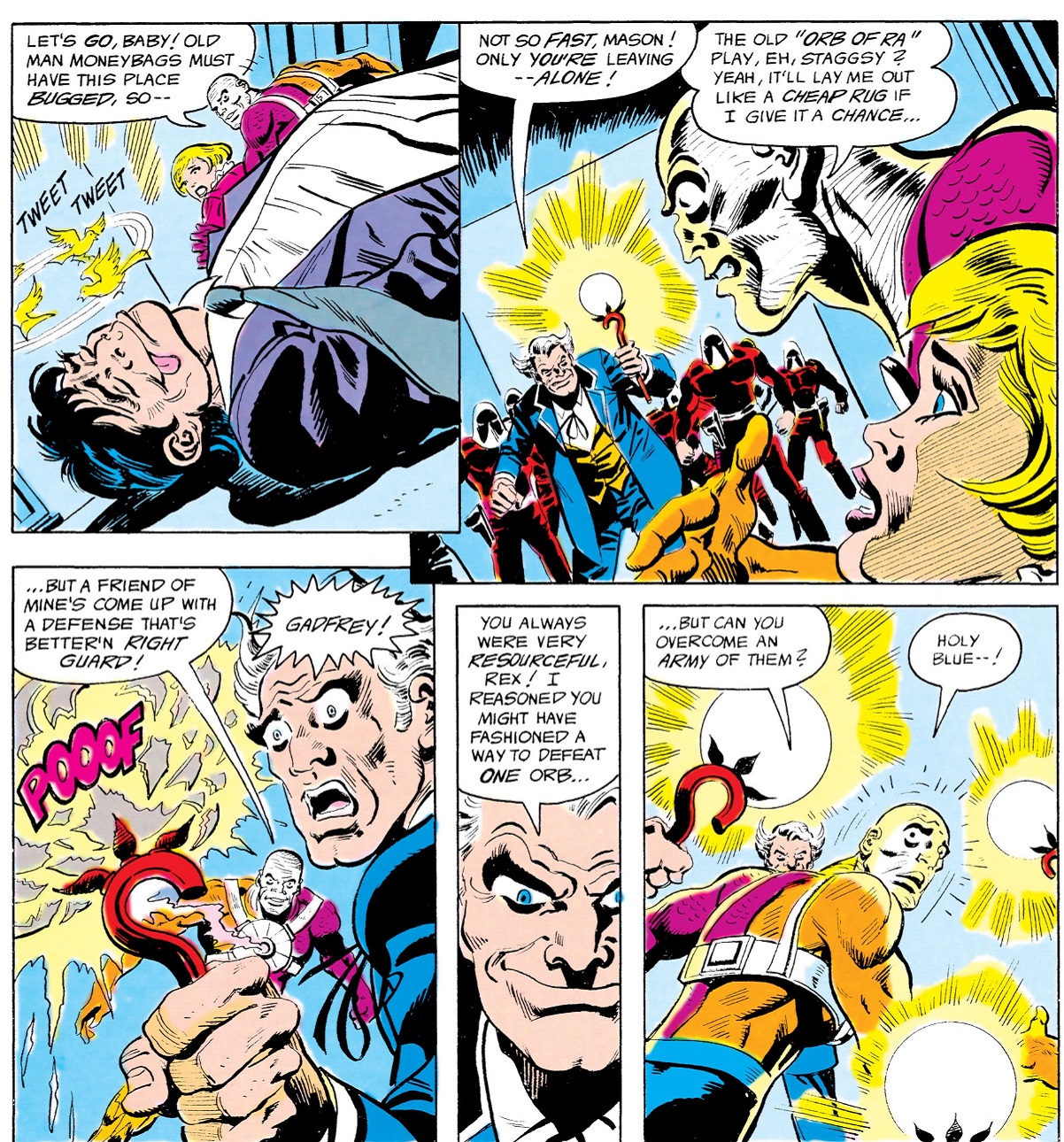 FIRST APPEARANCE: ‘The Brave and the Bold’ #57

FATHERLY FAILINGS: It’s not easy to see your daughter dating a man you don’t approve of, but Simon Stagg takes things a bit further than most dads. Simon is the CEO of Stagg Enterprises, and he’s used his empire to control everything, including his daughter Sapphire’s love life. Simon wasn’t keen on Rex Mason, her choice of a suitor, so he funded an expedition to keep the two apart. To ensure that Rex and Sapphire could never marry, Simon even had one of his henchmen attack the adventurer during the trip and leave him for dead. Rex survived and became the elemental superhero Metamorpho. Despite this, Simon continued to do everything in his power to get rid of Rex, including intercepting the messages the hero was trying to send to his daughter. It didn’t work, and Metamorpho eventually became Simon’s son-in-law. While the two men have had occasional truces, Simon has still attempted to kill Rex from time to time. Simon claims he has his daughter’s best interests at heart, but it’s a safe bet that Sapphire disagrees.

Which DC dad do you think is the worst? Let us know in our Community!