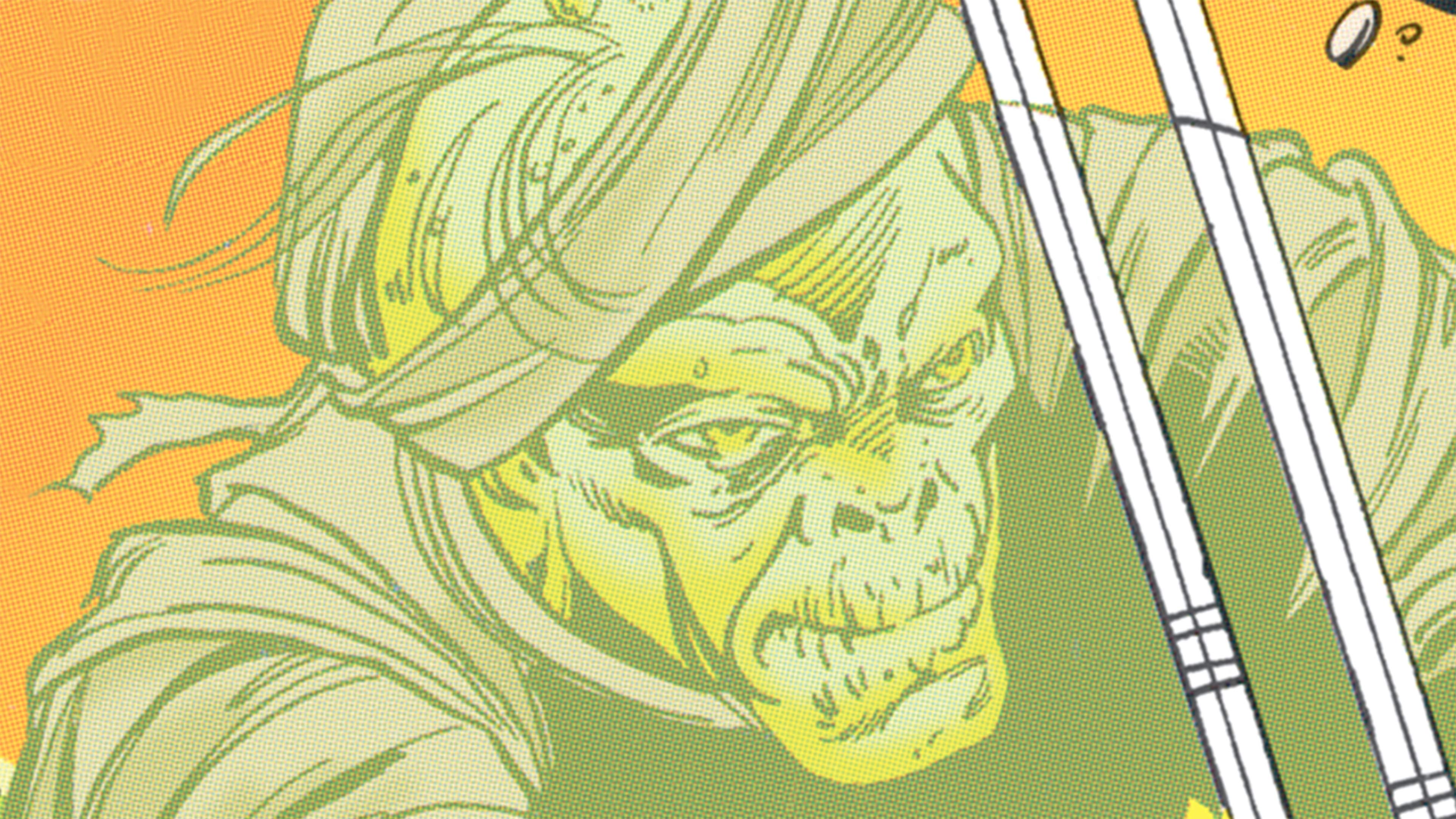 In all of the DC Universe, no team has so consistently and creatively wielded imagination like the Green Lantern Corps. Although themes of overcoming fear and harnessing great willpower are foundational for earning the Green Lantern Power Rings, imagination is what keeps the team's comics going, both through their story content and the personalities of their various characters. From Hal Jordan and Alan Scott to Kyle Rayner and John Stewart, all a Lantern needs is imagination and will. Over the course of hundreds of stories, there have been countless constructs brought to life by the GL corpsmen and women – weapons, parachutes, boxing gloves, and everything in between. Let’s look at how various Lanterns have made their wildest imaginings into reality... 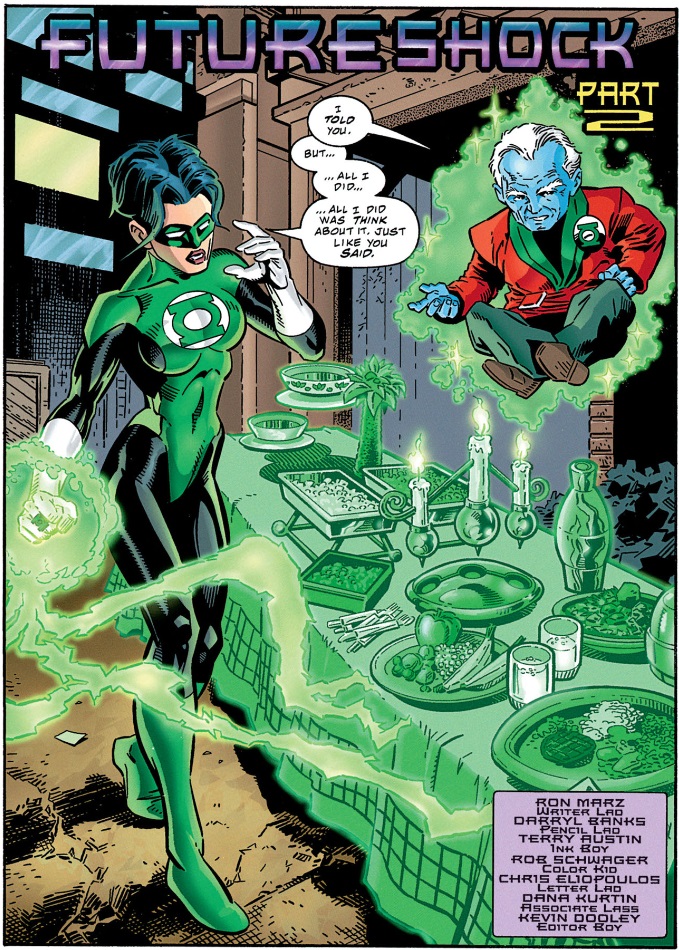 In this story, from Green Lantern #99, Cary Wren – a descendant of Kyle Rayner from the 30th century – was given a Power Ring by Ganthet, Guardian of the Universe. Homeless and living on the streets, Cary was given the ring to keep the legacy of the GL Corps intact after Kyle went missing in the future. Ganthet has her demonstrate the ring’s capabilities, explaining that creating permanent things like food is possible, but only through great concentration. 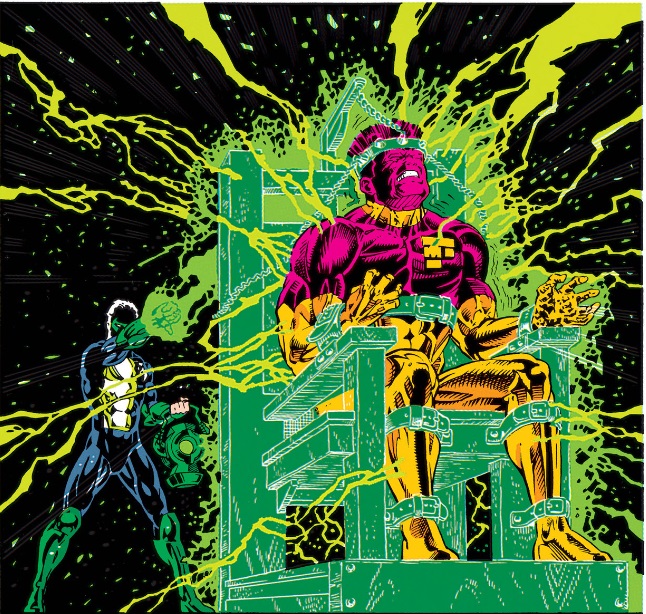 In the infamous Green Lantern #55, the villain Major Force killed Kyle Rayner’s girlfriend Alex DeWitt. Kyle – who had only just discovered the ring and barely knew what to do with it as a hero – immediately engaged with Major Force for revenge. Inexperienced and grief-stricken, Kyle interrogated the madman with “Old Sparky”, demanding that MF explain why he attacked and killed Alex or he’ll die…and perhaps even after. 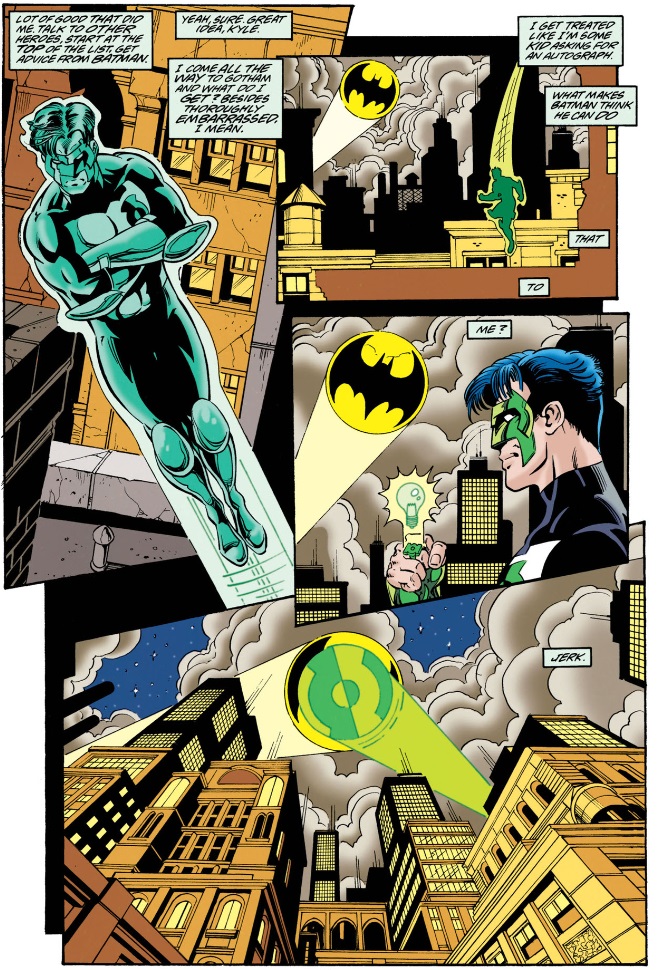 Much of Kyle Rayner’s tenure as Earth’s Last Remaining Green Lantern was colored by the fact that unlike every other member of the corps, he was brought in with zero knowledge of how to be a hero. Previous Lanterns such as Guy Gardner and John Stewart were deemed worthy by the Guardians of the Universe through various acts of courage. Kyle was found in an alley outside of a night club. Despite membership in the New Titans (and later the Justice League of America,) Kyle often doubted his place among legends, often comparing himself to Hal Jordan. To overcome this self-doubt, he toured the DC Universe in search of learning from the best. Once of the hotspots he visited was Gotham City, hoping to get some pointers from The Dark Knight himself. However, Batman, while complimenting him on his previous acts of heroism thus far, insisted that he had his own style and reasons for fighting crime that were not meant to just be copied by others. Although Robin was present to give Kyle a calmer, more empathetic pep-talk, Kyle was still pretty salty from Batman’s rebuke, and created his own version of the Bat-Signal which blocked the real one, getting his get-back on the Caped Crusader. 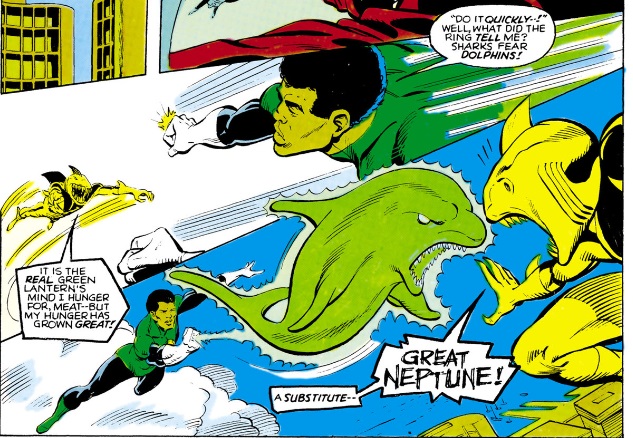 In Green Lantern #196, Hal Jordan – who at the time had relinquished the GL ring to his successor John Stewart – revealed to John that he was the previous Green Lantern. Soon after in John’s apartment, Hal was attacked by The Shark, one of Hal’s old foes. John sends the powerless Hal away and quickly utilizes the ring to assess how best to fight his new opponent. In the blink of an eye, John conjures up the image of a dolphin with razor-sharp teeth, sending The Shark into a flight of terror. 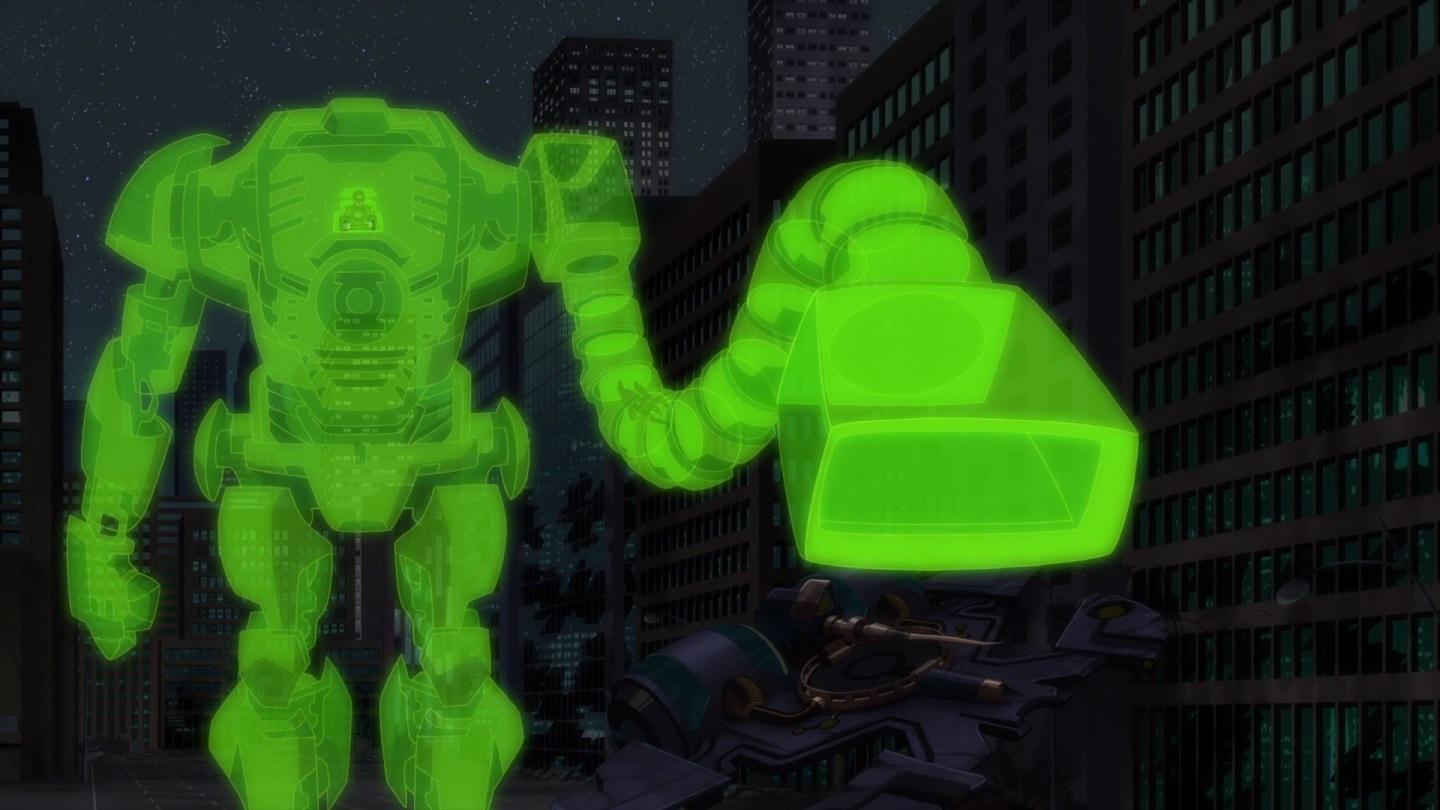 In Justice League: Throne of Atlantis, a still-newly minted team of the world’s greatest heroes take on the threat of Orm, the Ocean Master and evil brother of Aquaman. Orm’s forces swarm the surface world and the League engages them with the full might of their powers. Green Lantern takes to the streets and evens the outnumbering odds by sucking dozens of Ocean Master’s soldiers off the ground and into the sky with a giant-sized mecha, complete with a vacuum cleaner sucker for an arm. 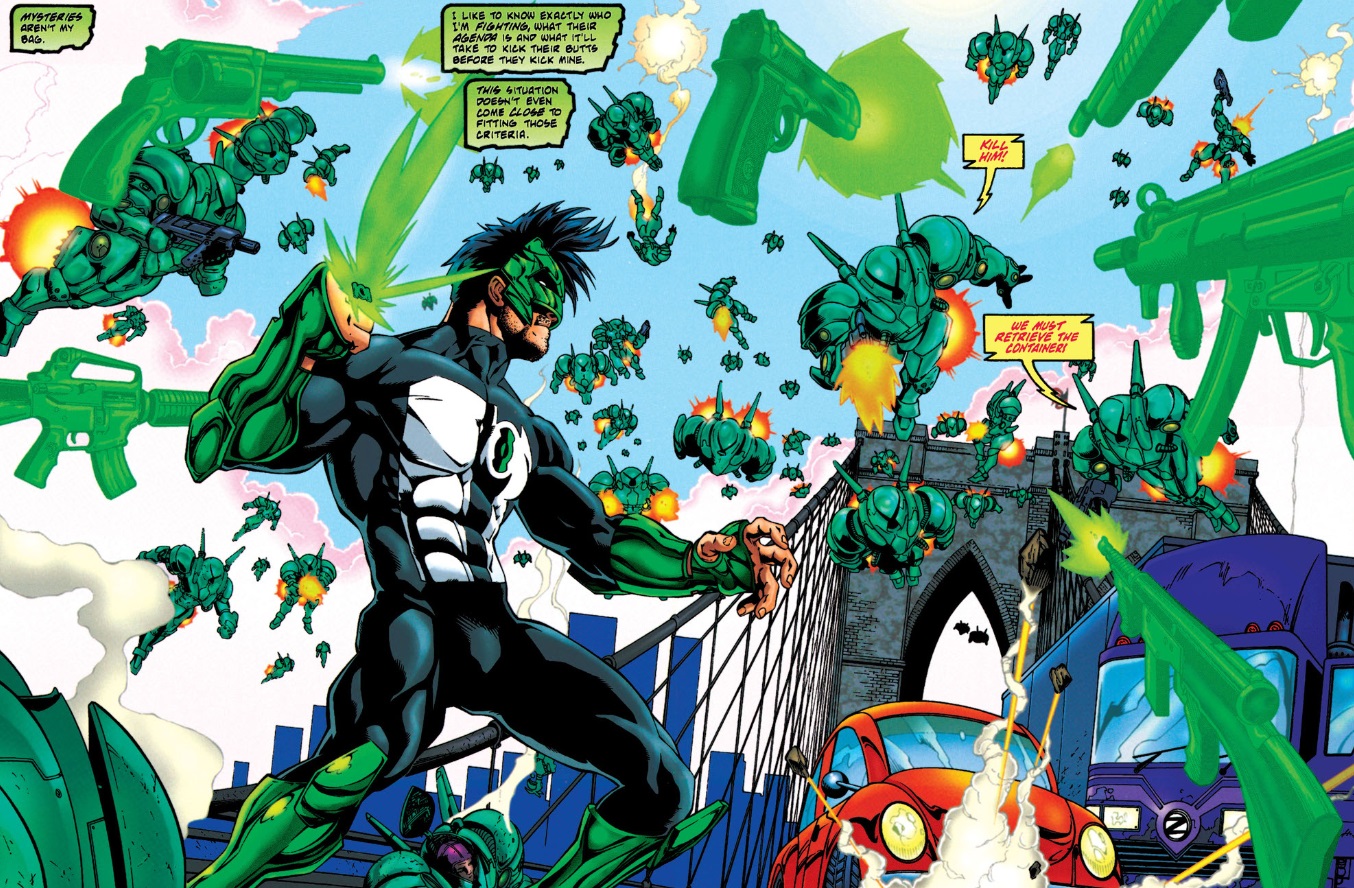 Green Lantern #115 begins with Kyle battling an army of robotic mercenaries trying to fry him. During the fight we get a flashback to an hour earlier, where Kyle woke up to a red box mysteriously delivered to his bedroom. Reading that it’s from “Blue and Gold Express”, he enters the wrong PIN number and is greeted by the killer mercenaries. The fight is taken to the city bridge where Kyle barely has enough time to scrounge together an offense. In split-second decision making, he creates dozens of various guns and firearms, blasting as many enemies as he can with as many rounds as he can think of. Unfortunately, the green guns have no effect. 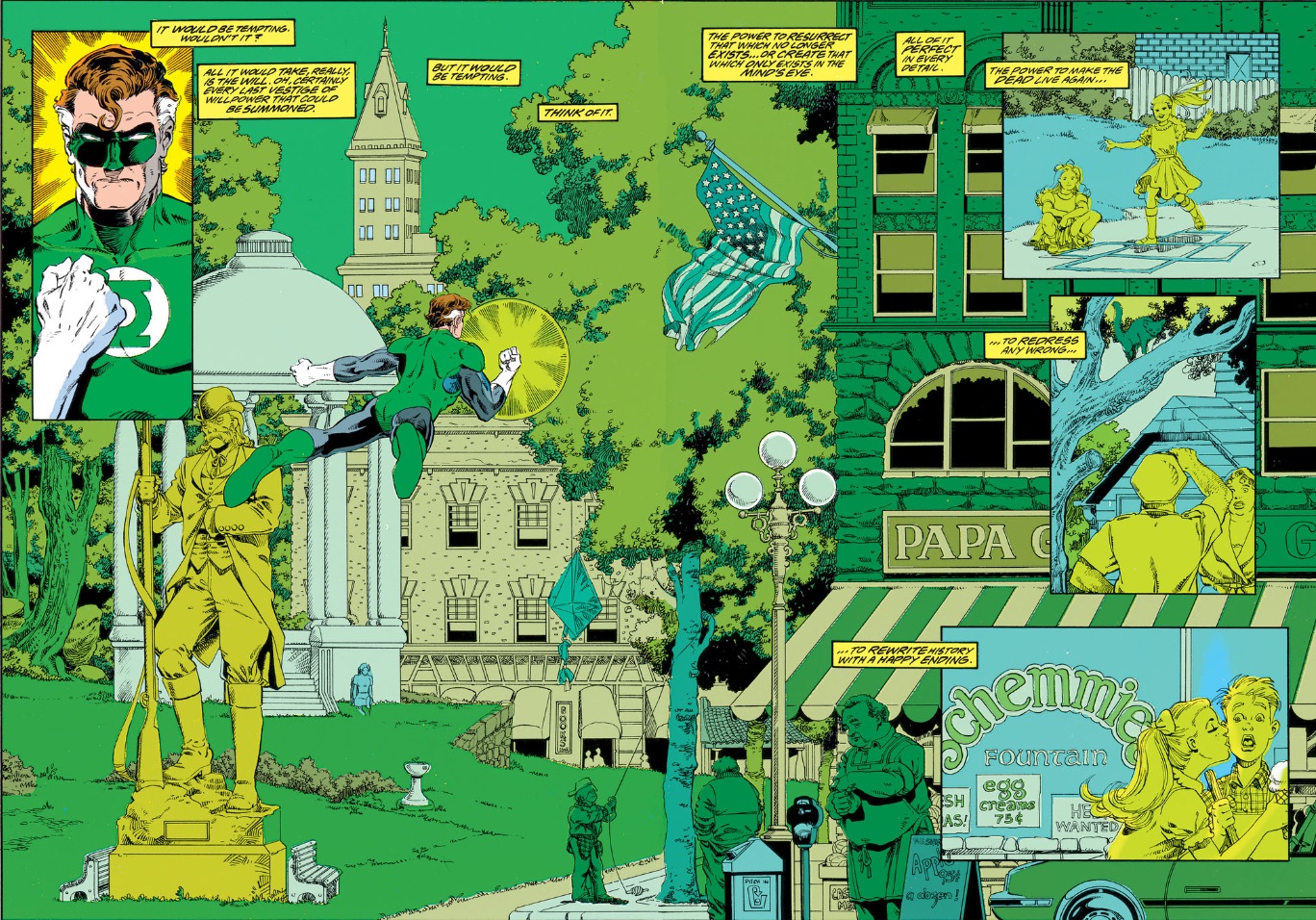 In the aftermath of the Return of Superman saga, Coast City was a crater in the planet, totally decimated by the evil despot Mongul. Overwhelmed with grief, Hal – with zero thoughts of the consequences – recreated the entire city through the willpower of his ring. From every blade of grass to every bird in the sky, all of it was restored back to when he loved it most. His parents were young again and he even reconstructed his old high school sweetheart. Just as his made-up father was finally going to tell Hal he was proud of him, the ring’s power ran out of energy. Soon after, Hal was sent a message from the Guardians, demanding that he return to Oa to receive punishment for attempting to use the Power Ring for his own personal gain. Unfortunately for them, Hal’s thirst for more power only grew from there… 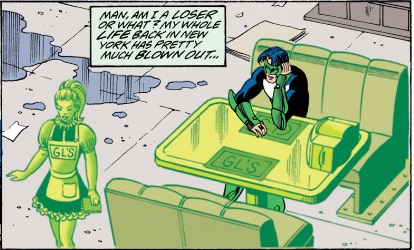 Granting that Hal Jordan trying to bring back an entire city with his Power Ring is a clear violation of the Oath of the Guardians, if we’re to take into account that any personal use is off-limits, then it’s a good thing the Corps was destroyed when Kyle Rayner became the last Green Lantern. An artist by trade, Kyle was well-known for using his illustrative imagination in coming up with the most creative, and the most creatively mundane constructs the GL series had seen up to that point.

9. THIS IS YOUR HAL ON DRUGS 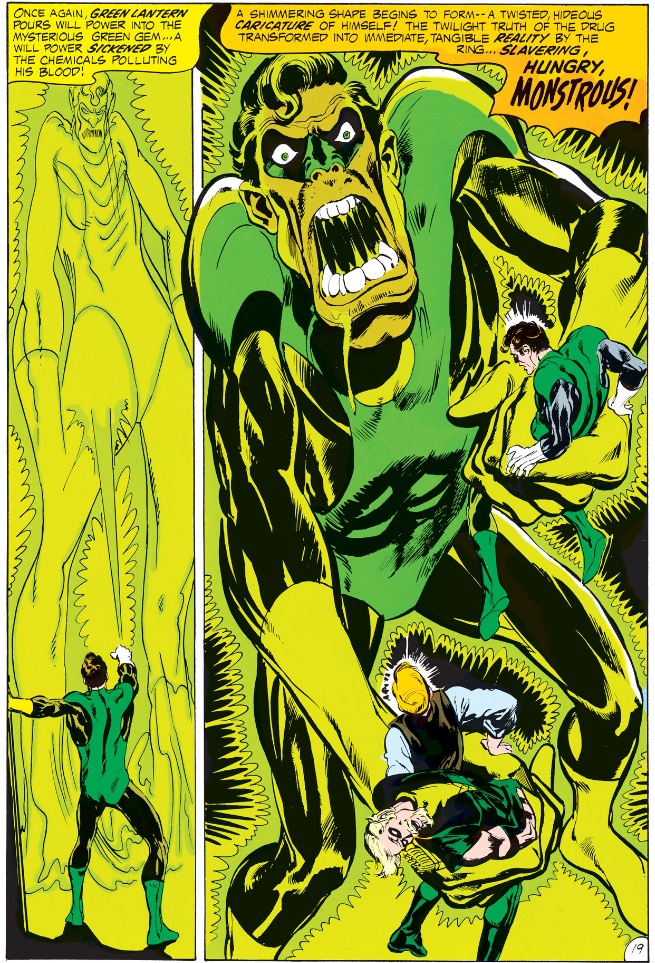 In the famous “Snowbirds Don’t Fly!” story from the brief Green Lantern/Green Arrow series by Dennis O’Neil and Neal Adams, the green guardians were in pursuit of local drug dealers who were in cahoots with a couple of teenagers that attacked Ollie Queen (Green Arrow) with a crossbow. Led into a hanger by the teens, the green guardians were both ambushed by the dealers and knocked unconscious. Rather than bash their heads in with a couple of wrenches, the dealers resorted to doping the “do-gooders” with uncut heroin so that when the police discovered them, they would take the rap for the drug racket. Luckily Green Arrow’s sidekick Speedy arrived before the cops and tried to get Green Lantern to make their escape. But since Hal was high as a kite, the best he could come up with was a monstrous construct of himself ready to devour the three heroes. It took everything Hal had to free his mind of the inebriation and return everyone safely to Ollie’s low-rent apartment. 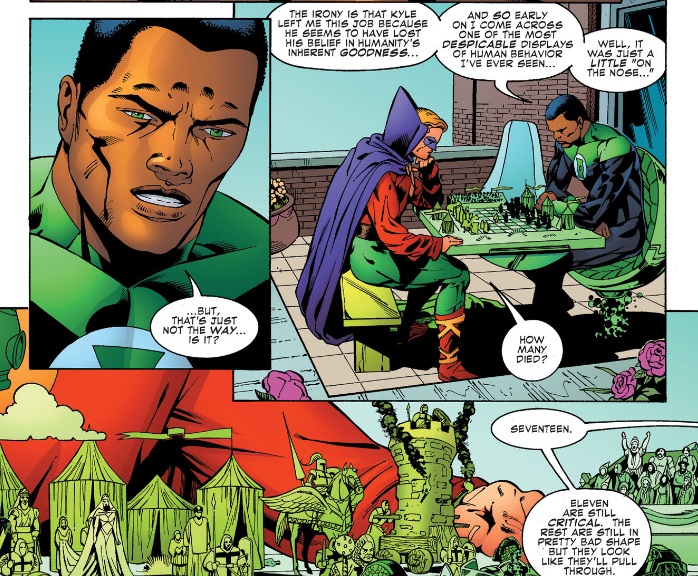 When John Stewart returned to the role of Green Lantern, he had trouble adjusting to the harshness of the world’s crimes after being away for several years. Venting his frustration with the original earthman GL Alan Scott, the two traded counsel while playing a game of chess – constructed by John as an old medieval version of the game complete with action and bloody defeats with each piece taken. 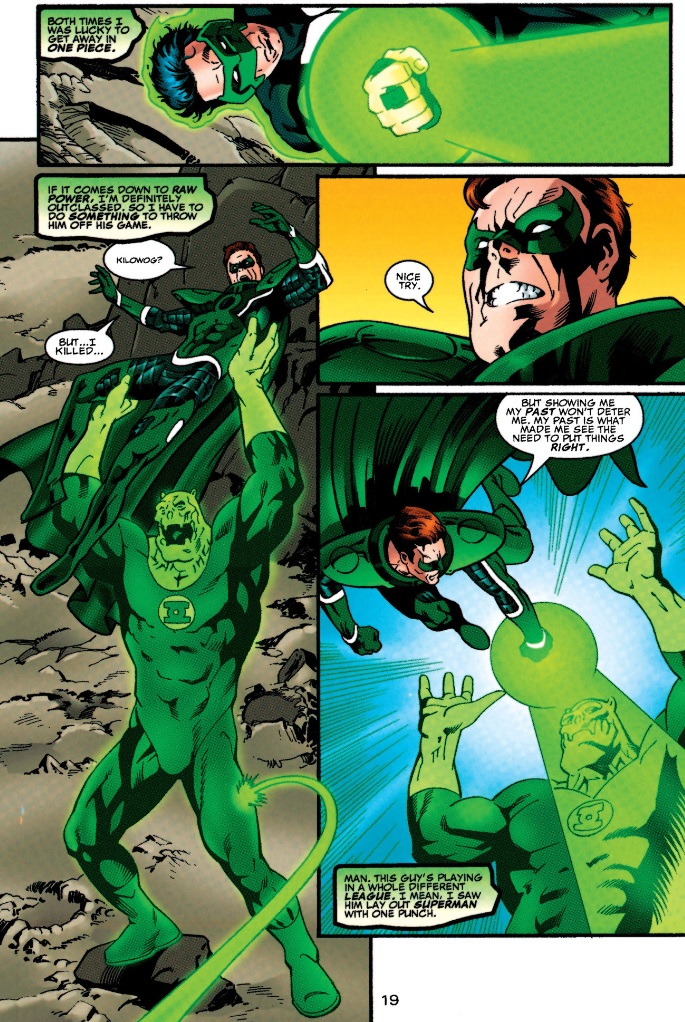 In Green Lantern #105, Kyle is hanging out with a time-displaced Hal Jordan – a version of the man from the past, newly assigned as a Green Lantern and relatively inexperienced. Eventually the then-evil Hal known as Parallax attacked Kyle. Outmatched, Kyle briefly got the drop on the former hero by conjuring the image of their old friend Kilowag, who Hal had slain years earlier. Kilowag would eventually be brought back, along with the rest of the Corps, but this moment showed how far gone Hal had been at the time. 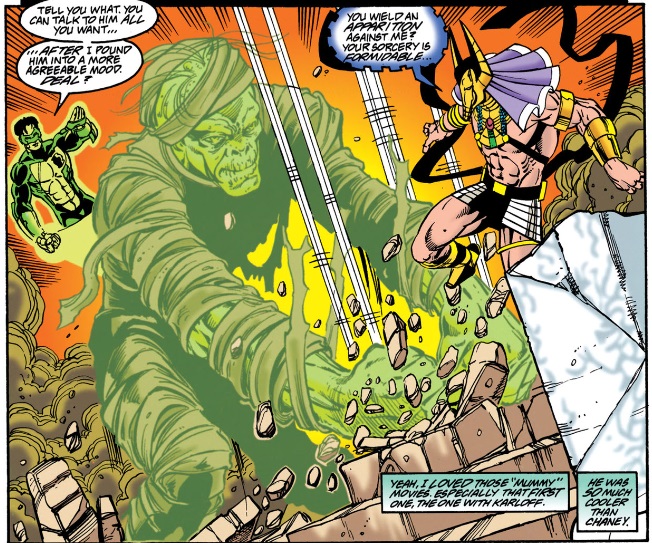 In Green Lantern #72, Kyle’s tour of the DCU lands him in Fawcett City where he tries to learn from Captain Marvel/Shazam. They end up battling the villain Seti – an old professor possessed by an evil Egyptian spirit. Kyle has no clue what’s going on, but he fights true to form, bringing to mind whatever he can to accommodate the fight, which in this instance means bringing to life mummies from his memory of watching the old films. 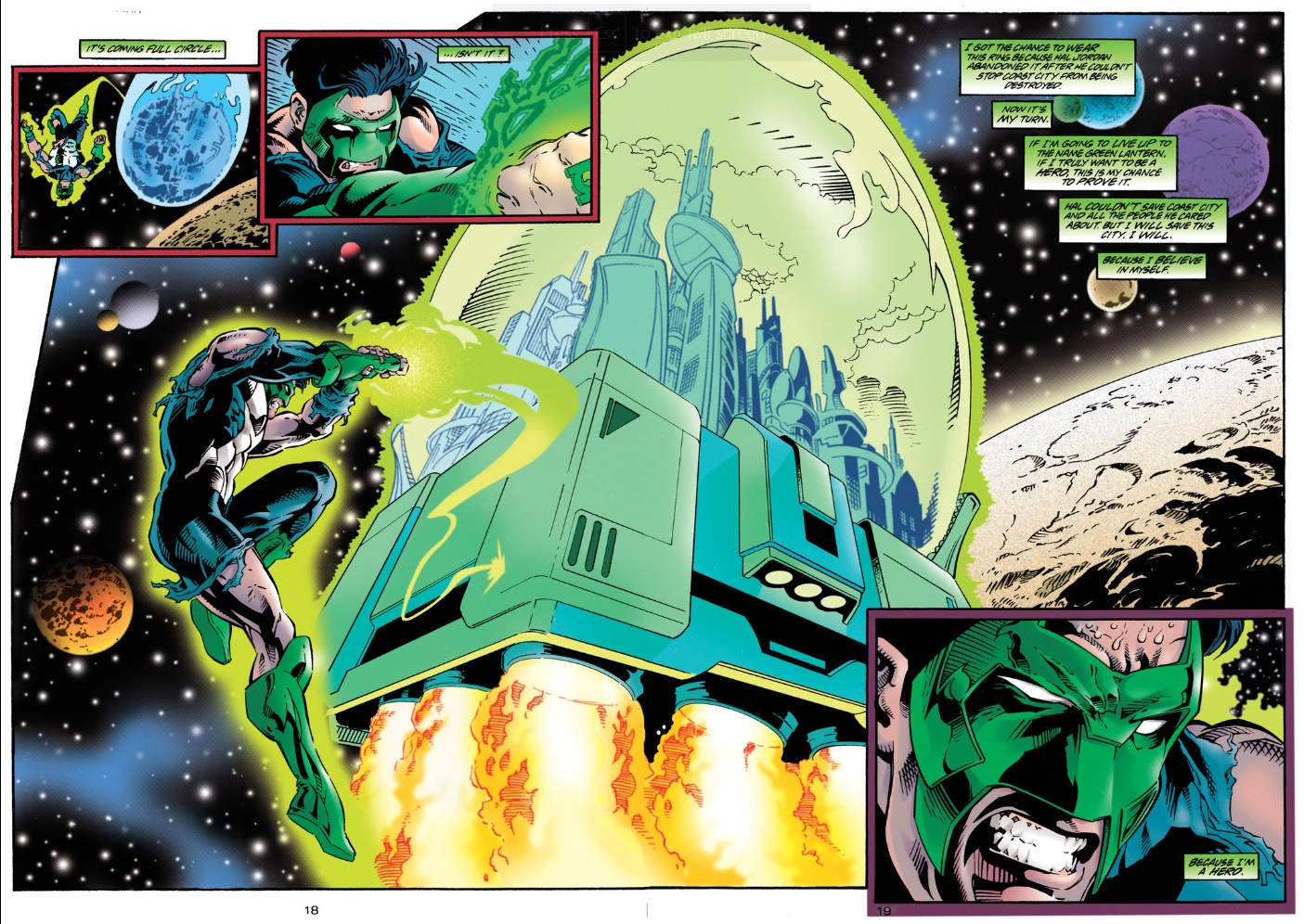 In Green Lantern #75, a major battle has broken out between the Darkstars and Grayven, son of Darkseid. During the battle, the floating city of Ranagar plummets from the sky. Kyle, throwing back all his doubts of his own abilities, puts everything he has into creative a giant defensive bubble to protect the city as it lands on the surface of the planet Rann. 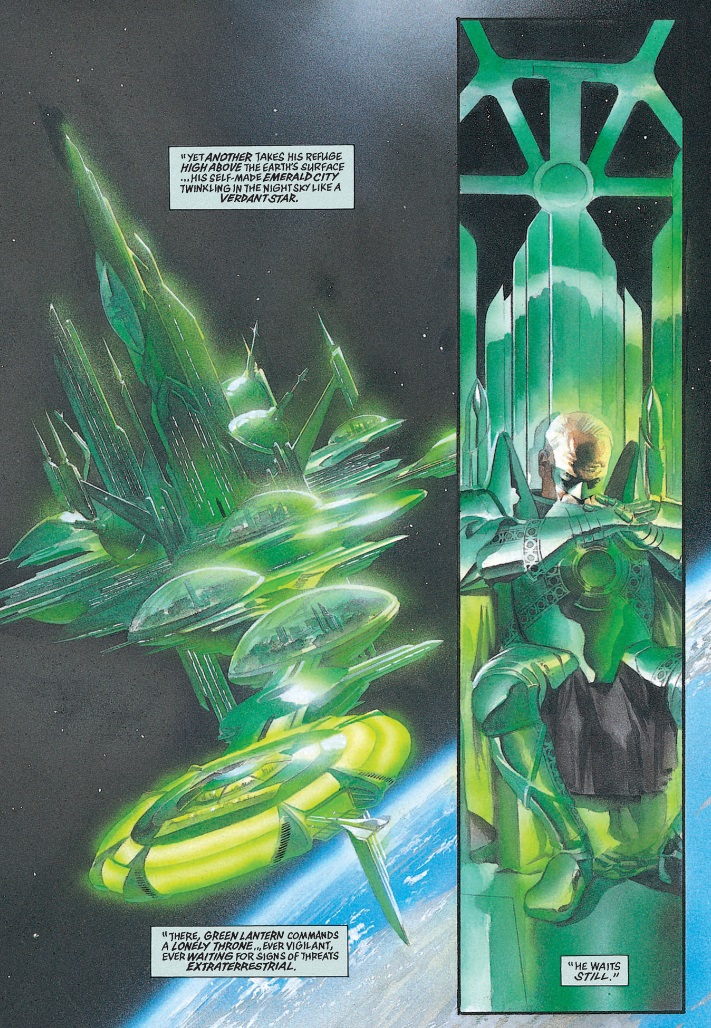 In the seminal 1996 epic Kingdom Come, the Green Lantern of the then-far future guarded the world with a protective city held closely over the Earth’s atmosphere. It served as a temple and headquarters of Superman’s reunited Justice League, and a base of operations for the Lantern of which he never left his post.

What's your favorite Green Lantern construct? Let us know in our Community!