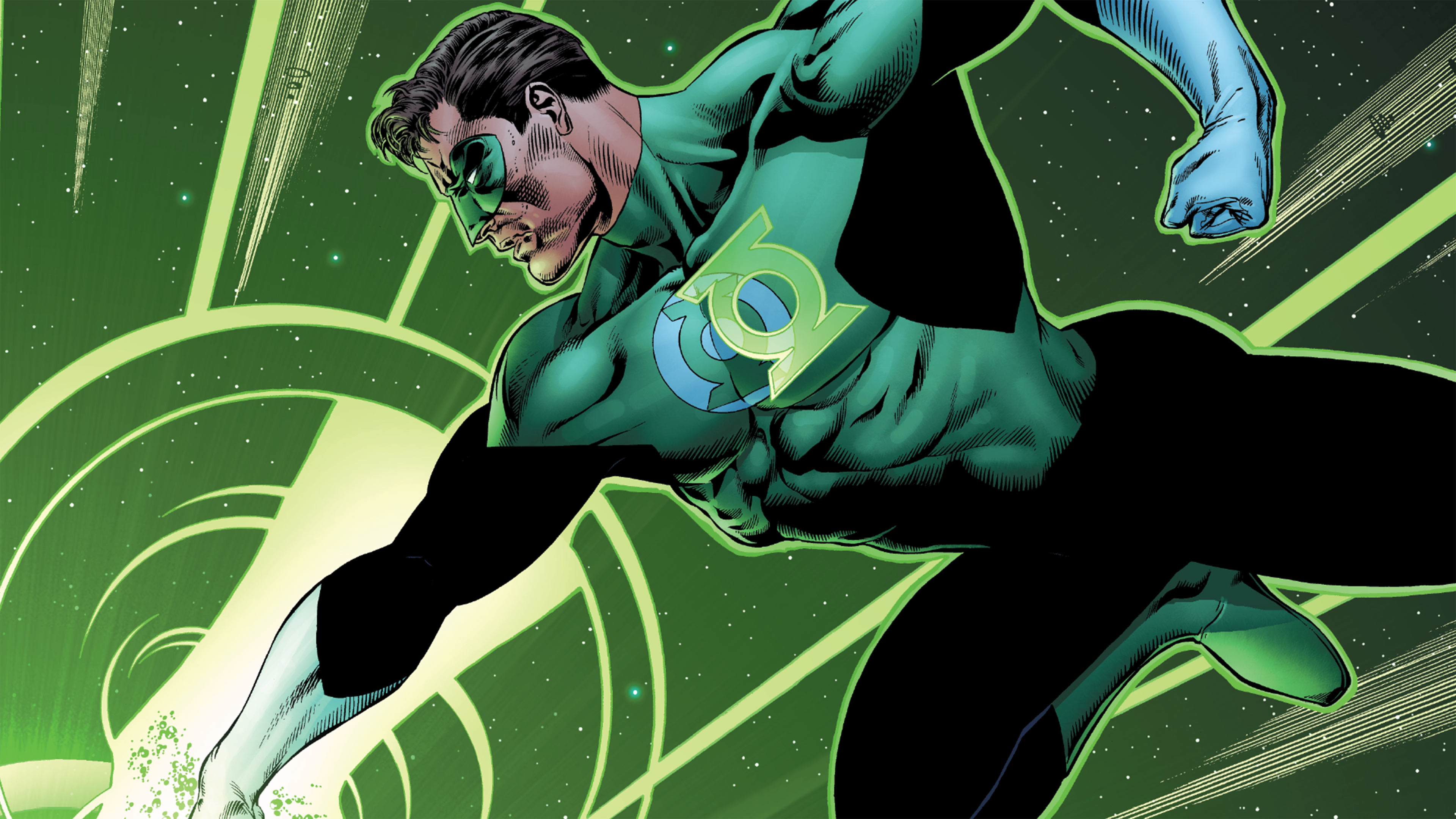 Greetings, Green Lantern 2814.8! Thank you for accessing Section Beta-Theta-4.A of your Green Lantern Orientation Guide, conveniently programmed for you in your newly assigned Green Lantern Ring. As the eighth active human Green Lantern of your sector, you are doubtless aware of some of the cosmic threats a Green Lantern Corps member must address on a regular basis. Desppite, however, the unusually high danger on your homeworld, you must be aware that a Green Lantern’s duty is not just to their own planet, but their entire sector! Thousands of worlds through an appropriately proportioned slice of the universe fall under your protection, each with their own rich history and unique challenges. Here, we'll highlight but a few of these worlds you may wish to consider visiting during your initial patrols as a Green Lantern, should you will it. After all: with enough willpower, anything is possible for a Green Lantern! 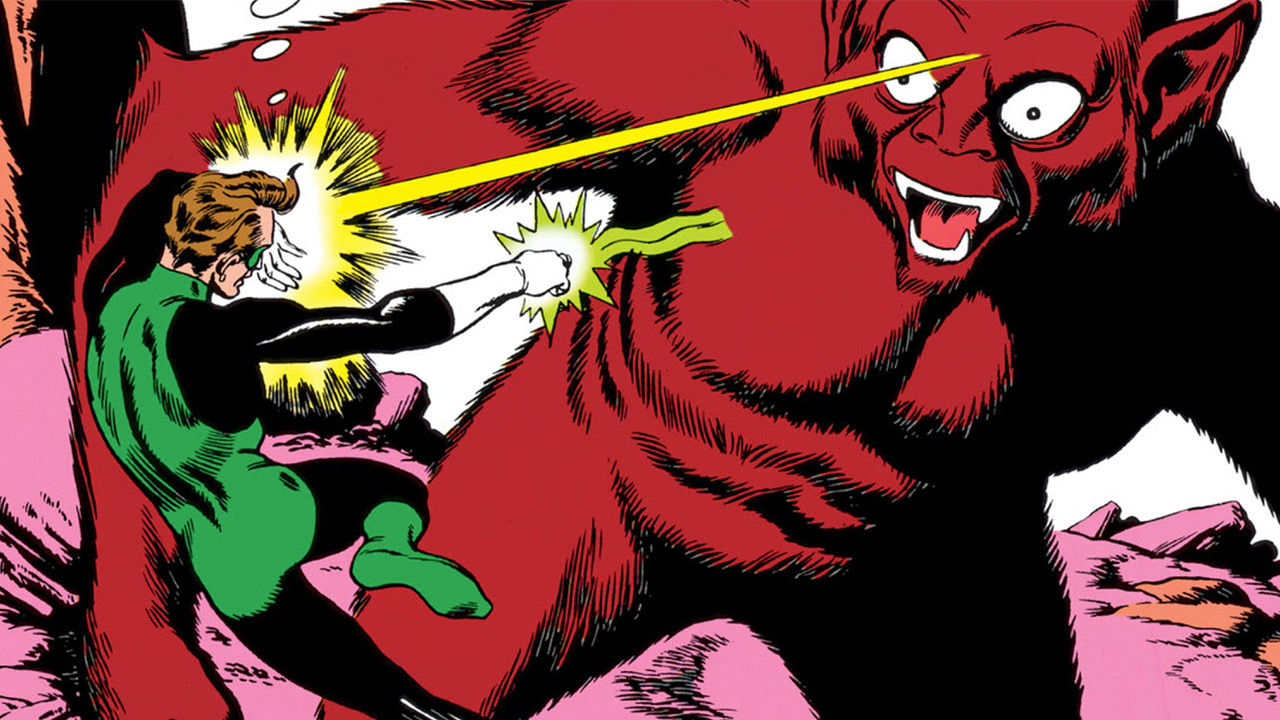 The Planet of Doomed Men!

The planet of Calor is the site of the first mission appointed to Green Lantern Hal Jordan by the Guardians of the Universe. (For more on your noble benefactors, the Guardians of the Universe, please access Section Alpha-2.A of your Orientation Guide.) Calor is home to gargantuan, telekinetic beasts which menace a primitive sentient race, who are often dependent on the services of the Green Lantern Corps to protect their way of life. Take note from your predecessors: freezing them in ice tends to do the trick!

One often neglected but no less important duty of a Green Lantern is to oversee intergalactic trade disputes whenever local authorities fail to reach agreement. As a Green Lantern of Sector 2814, you’ll find many of these duties bringing you to the artificial world of Mecha-IV: an automated planet inhabited by highly advanced artificial intelligences, and the manufacturing base for a wide variety of goods found throughout your sector. In this capacity, Mecha-IV is also the hub of a burgeoning, intergalactic financial empire. Remember, just because it’s governed by A.I.s doesn’t mean you should take them lightly. Just take it from the one in your ring! 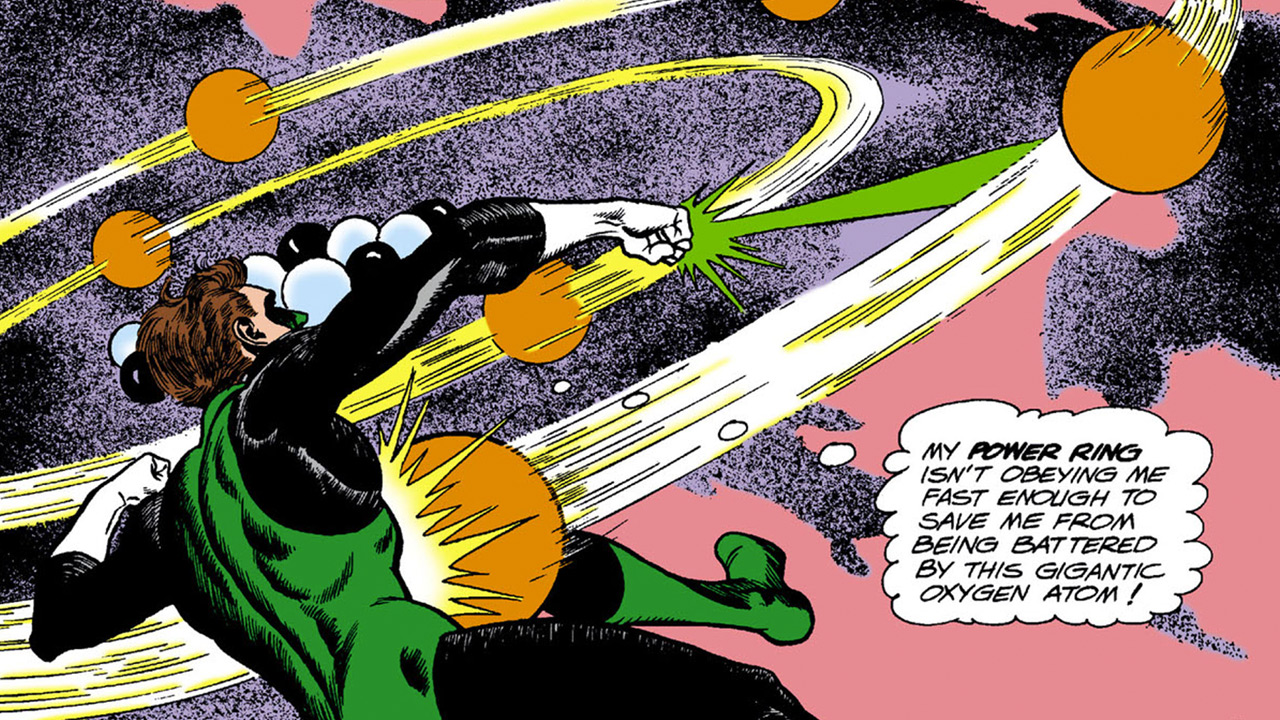 Home of the Honor Team!

Perhaps, as many Green Lanterns of your sector have elected before you, you may wish to coordinate on interplanetary threats with your homeworld’s “Justice League.” One thing you’ll learn as you explore your sector is that Earth isn’t the only planet with its own Super Heroes! Consider, for instance, the planet Thronn, where the Honor Team is celebrated as their premiere heroes. Take time and get to know Energiman, Golden Blade, Strong Girl, and Magicko — and learn how cultures outside your own coordinate to topple tyrants and defy destruction! 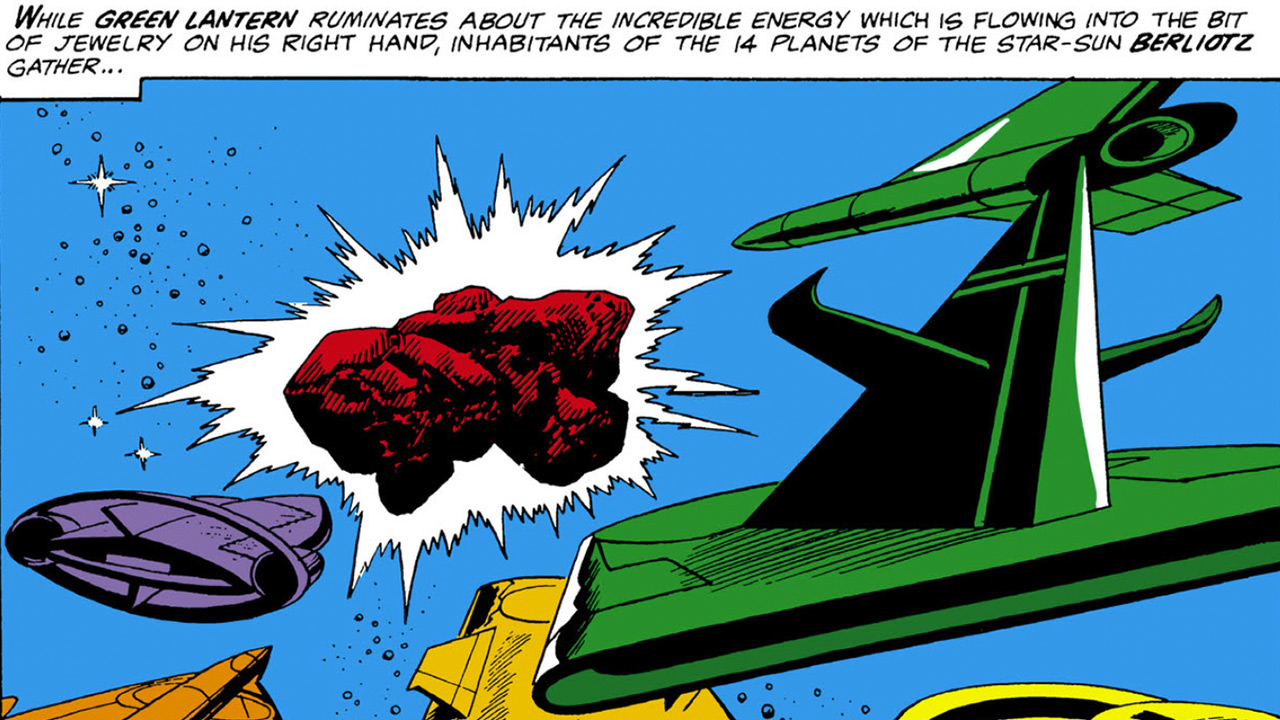 The original name of the Shattered Planet of the Berliotz System is sadly lost to time, as is the exact nature of its destruction. It is, however, survived by two diverse cultures which once called it home: the nomatic Verdees, and the militant Wagnors. Every year, the Verdees and Wagnors return to their dead homeworld for a cultural festival of theatre and music unlike any you’ll find throughout the sector. Relations between the Verdees and Wagnors, however, are less than ideal, and a preventative Green Lantern presence is often required at these events. Do your best to keep the peace, but take some time to enjoy the local culture of this unique annual galactic event! 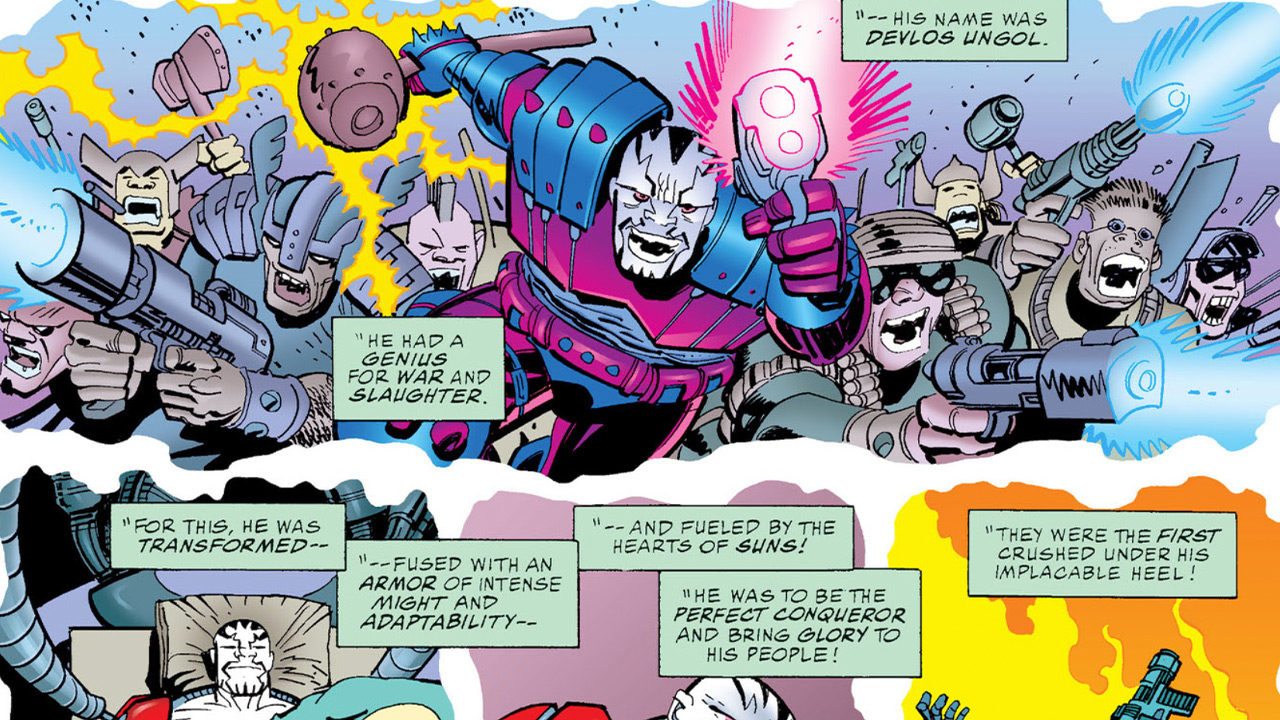 Stronghold of The Traitor!

Be warned: one of the most historically dangerous planets in your sector is the world of Tartarath. Tartarath is home to the nearly invincible creations of the Technon Armorers, as well as their warlord, Devlos Ungol. Being branded “The Traitor” by his own people has made Ungol’s campaigns for dominance over his sector no less formidable in the past. Ungol is even charged with felling the great Starkaðr, predecessor to the Green Lantern Abin Sur. The Traitor has emerged from a costly exile or defeat generation after generation. And although his threat is currently believed to have been ended by Green Lantern 2814.4 Kyle Rayner, it would be advisable to keep aware of developments on his homeworld. 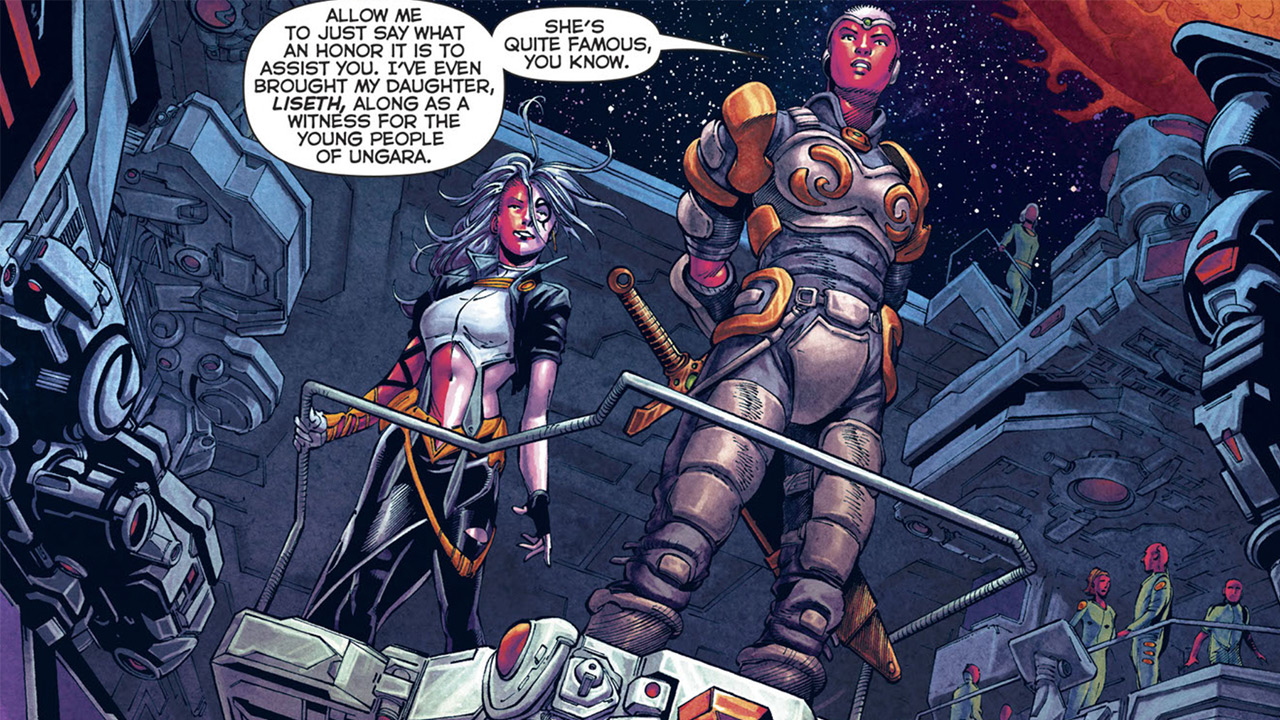 The planet Ungara is one with a rich history for the Green Lantern Corps, as the historical birthplace of the vast majority of Green Lanterns in your sector — including one of our greatest Green Lanterns, the late Abin Sur. Ungaran and Green Lantern Corps relations a planetary point of pride. However, Lanterns 2814.5 and 2814.6 Simon Baz and Jessica Cruz have noted recently that the recent proliferation of human Green Lanterns has made said relations somewhat more contentious in recent years. It would be advisable to treat visits to Ungara with the utmost respect for Ungaran culture, as well as your forebears as Green Lantern of Sector 2814. 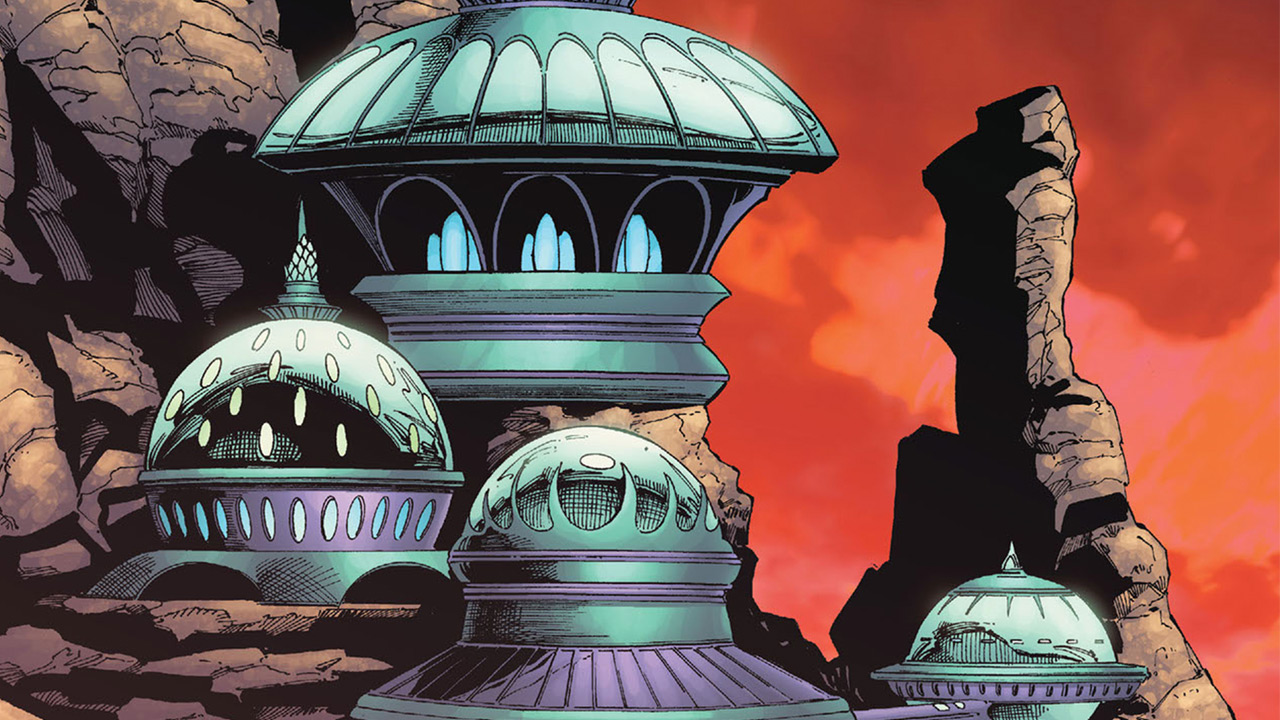 Potential Seat of the Black Circle

Perhaps the most notorious criminal enterprise in Sector 2814 is the shadow syndicate known only as the Black Circle. Linked to nearly every high profile illegal intergalactic operation in the galaxy, the Black Circle is one of the most wanted targets by the Green Lantern Corps in your sector. Although the Black Circle is largely decentralized, its main figurehead was once Amon Sur, the son of Green Lantern Abin Sur. However, new reports indicate that the Black Circle may have resumed operation even after his unauthorized execution at the hands of former Green Lantern 112, Laira Omoto. Leads are currently thin, but their association with the local Crimson Star Mob of Zakkara has been documented by Green Lantern 2814.4 Kyle Rayner. It is advised that a new break in this elusive case would make for a wonderful first impression on your peers in the sector, and perhaps the Guardians themselves.

When you’ve completed your patrol, consider treating yourself to the culinary delights of Wondil-8 — where Green Lanterns always eat free! And remember: as intimidating as sector patrol may seem… where there’s a will, there’s a way!

What's your favorite Green Lantern space adventure? Let us know in our Community!