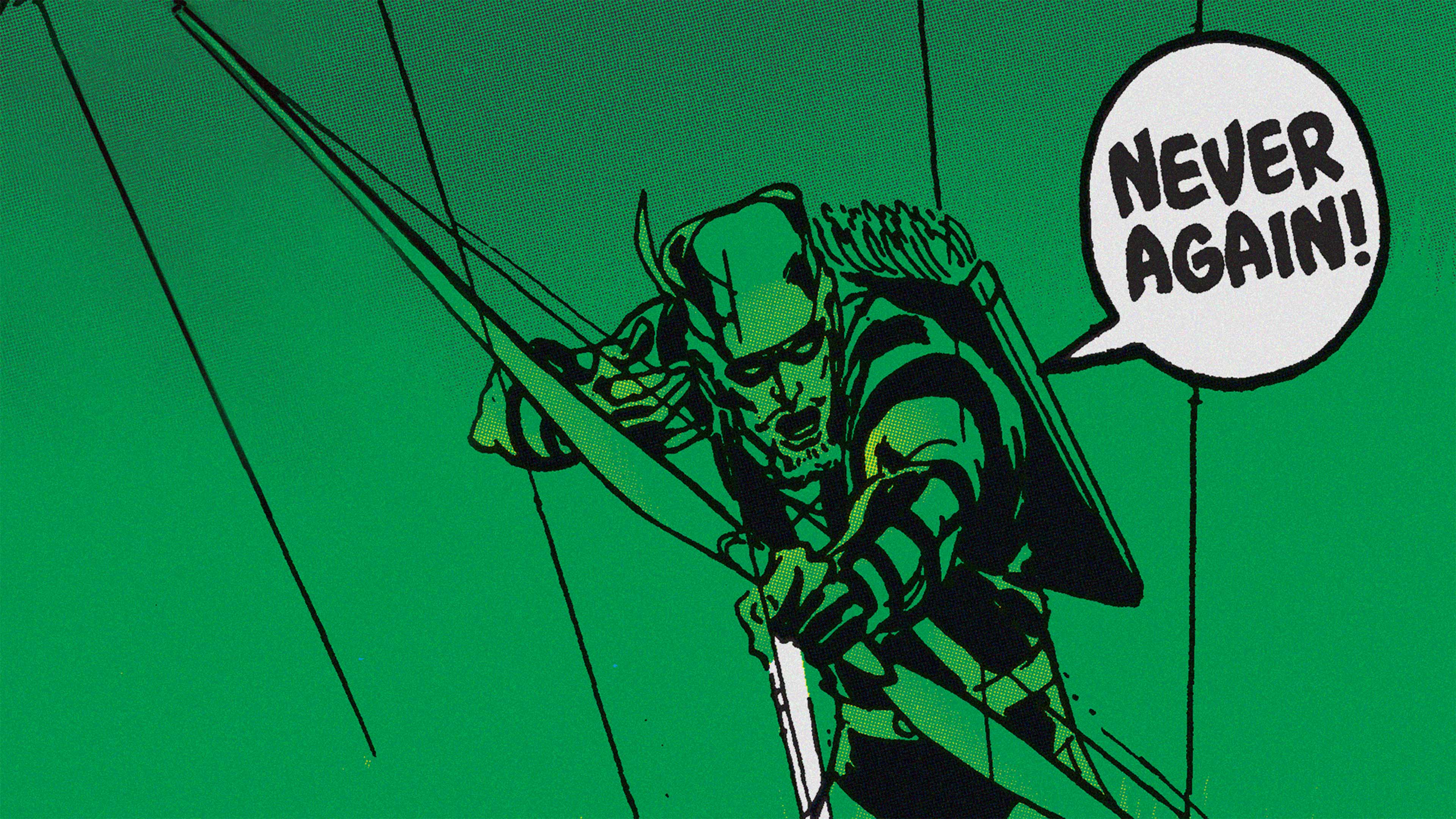 Why Green Arrow Was the Original Social Justice Warrior

Writer Dennis O’Neil is a comic book icon in part through his contribution to revamping some of DC’s most classic characters. From his definitive take on Batman with artist Neal Adams (returning the Dark Knight Detective to his gothic origins) to his unique version of Wonder Woman as a martial artist spy, O’Neil’s work laid a foundation for many writers who succeeded him. And although his Batman work may be the most popular of his output, second place immediately goes to his run on the seminal 1971 series Green Lantern/Green Arrow. Collaborating with Neal Adams, O’Neil brought social relevance – kicking and screaming – to the adventures of the Green Guardians. 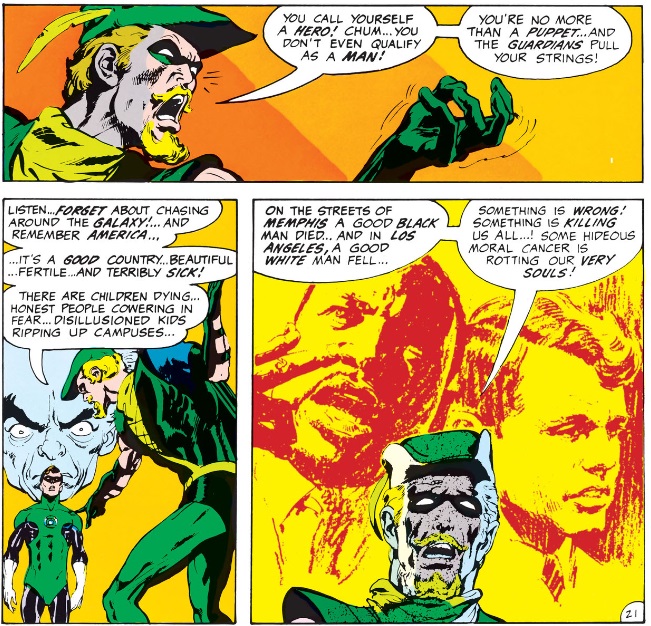 But it was Green Arrow whom O’Neil altered most to drive much of his stories' conflict. O’Neil saw Green Lantern Hal Jordan as a glorified space cop. Hal followed the commands of the Guardians of the Universe without question, trusting in the justice system both on Earth and in the outer galaxy. Oliver Queen was quite the opposite. Through O’Neil’s writing, the Battling Bowman was imbued with a fiery sense of moral outrage, always eager to help out wherever there was trouble that went beyond simple costumed bad guys. The grayer, blurrier lines of ethics and morality appealed to Arrow’s new sense of independence and social outrage, as he’d lost his fortune in the pages of Justice League a short time earlier. 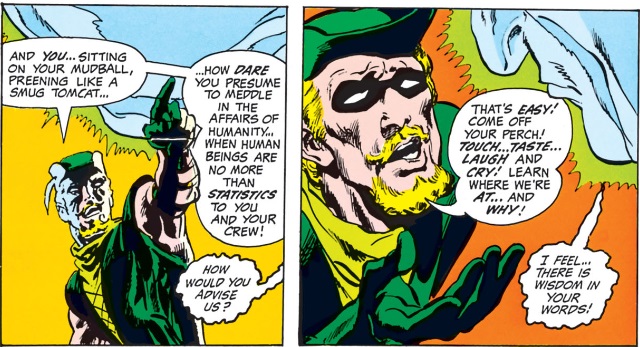 In Green Lantern #76 (heretofore renamed Green Lantern/Green Arrow), an encounter with an oppressive landlord has shaken Hal Jordan’s sense of justice. To alleviate his friend’s confusion, Ollie suggests that they and one of the Guardians of Oa travel America, seeking to find new ways to appreciate, understand, and help parts of the country that often go unnoticed. What follows are a spate of issues known collectively as the characters' “Hard Travelling Heroes” era. The routine went as follows... The three would drive from town to town, typically running into places where an individual was oppressing a downtrodden community, the victims ranging from the poor and lower class to the Native American population. Green Arrow would offer to help save the town, while Green Lantern’s instinct would be to learn more about the situation from both sides. Oliver, not one known for his even temper, would quickly draw comparisons to other famous fascists and deliver Hal an ultimatum: help or get out of his way. 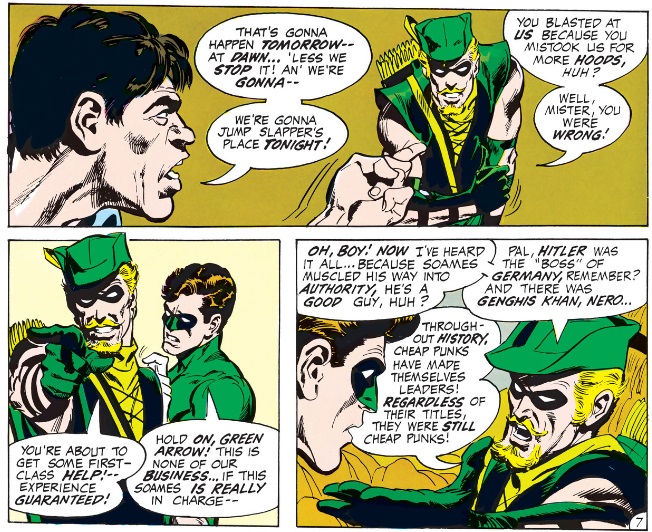 It was Ollie’s hotheadedness that often got him in trouble, and that was by design. Consider a thematically similar comic series found in 1968’s Hawk and Dove title (by the great Steve Ditko). It’s readily apparent when reading that work where the author’s sympathies lay. Hawk – the aggressor – was regularly portrayed more favorably than his brother Dove – the pacifist. Conversely, while O’Neil’s social philosophies were spewed through Green Arrow’s character, he was never so indulgent as to forget that Oliver Queen would last much longer than he would and took to every story to have him learn just as much as Hal Jordan. Case in point, issue #79 featured the trio running into a land dispute between Native Americans and a gang of racists. While Hal flew off to talk to some people in government on how to solve the issue, Oliver disguised himself as the living spirit of an old Native American chief, urging the group to fight for their rights by any means necessary. When confronted by Green Lantern, the two get into a fistfight and both nearly drown before being rescued by the surely appalled onlookers. 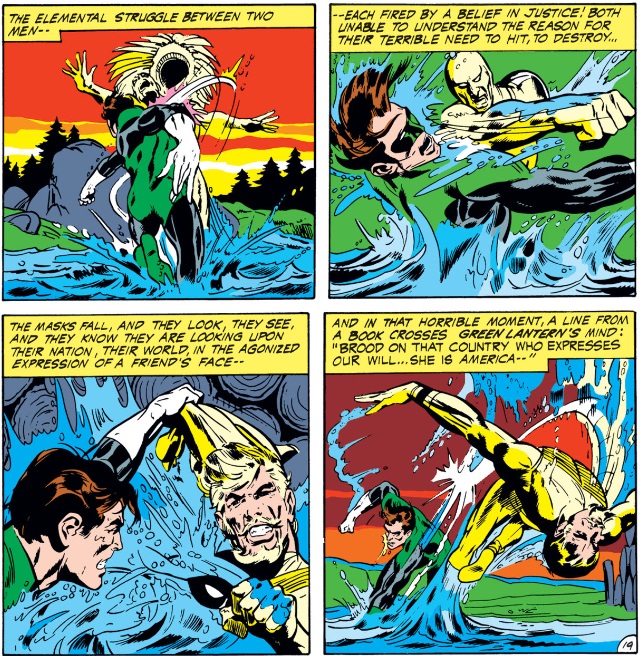 Fights between the Emerald Crusaders would happen often, much to everyone’s embarassment. O’Neil wrote Oliver Queen as a hearty, passionate man with a zest for life and a fire in his heart for Black Canary. In Green Lantern/Green Arrow #78, when Dinah Lance was slow to reciprocate his kiss due to amnesia, Hal suggested that perhaps she had moved on, which Oliver did not take too kindly. 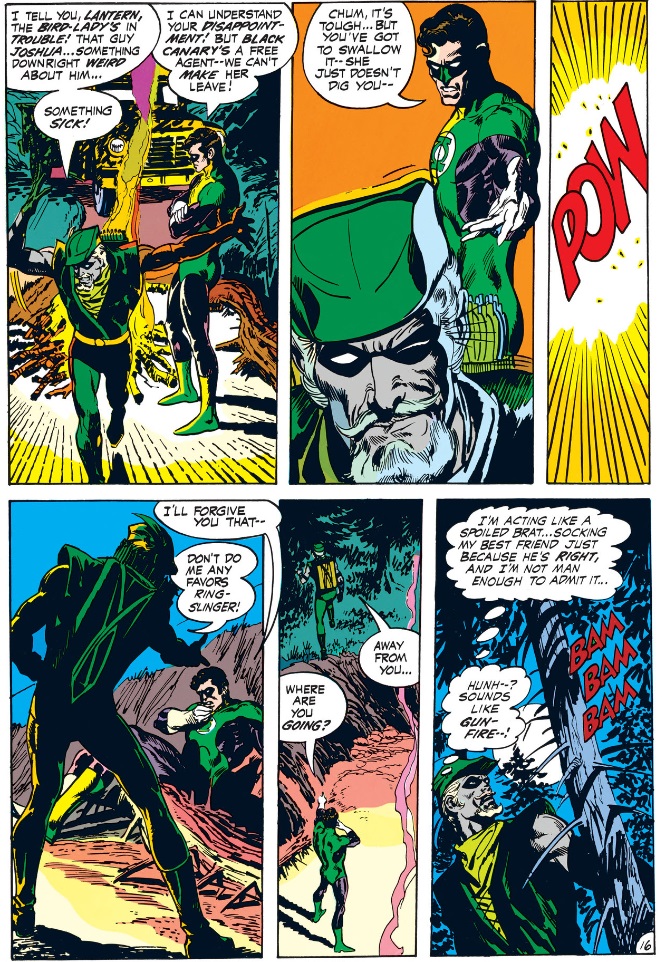 In issue #89, Oliver runs into an environmentalist named Isaac, who meddled with Ferris Aircraft to send an anti-polution message. When Hal arrives to arrest him, Oliver knocks him unconcious with a sleeping gas arrow. 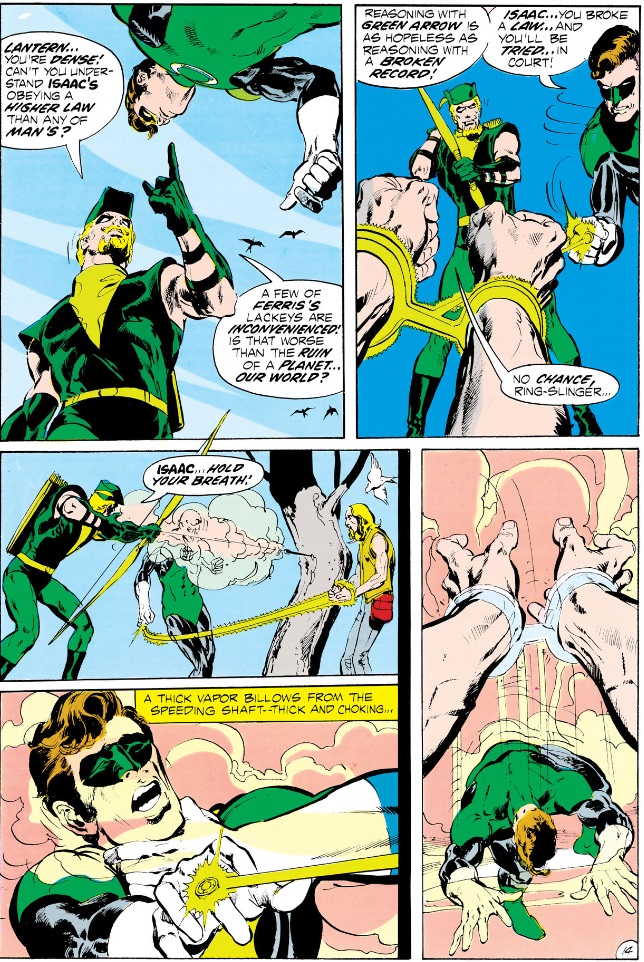 O'Neil, however, doesn’t let Oliver off the hook. Isaac condemns him for poisoning the environment with his gimmick arrows, leaving him adrift and ashamed. 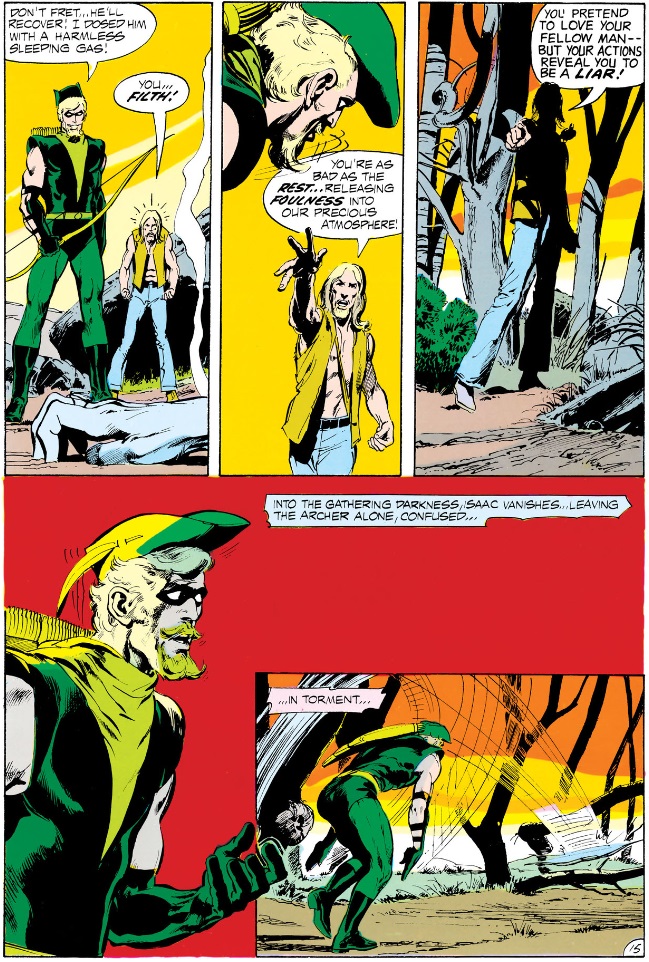 It wasn’t every issue in which the two found themselves on opposite sides. Green Lantern/Green Arrow #80 had them at the far end of the galaxy, opposing kangaroo courts and the threat of technology replacing humanity. Issue #81 saw the three men and Black Canary deal with the matter of overpopulation on an alien planet. Issue #83 dealt with child abuse in the form of a little girl with psychic abilities controlled by a crazed misogynist. And issue #84 had the two tackle polution and big business. One of the biggest blows to Green Arrow’s career, however, came in a seminal two-part story dealing with drug abuse. 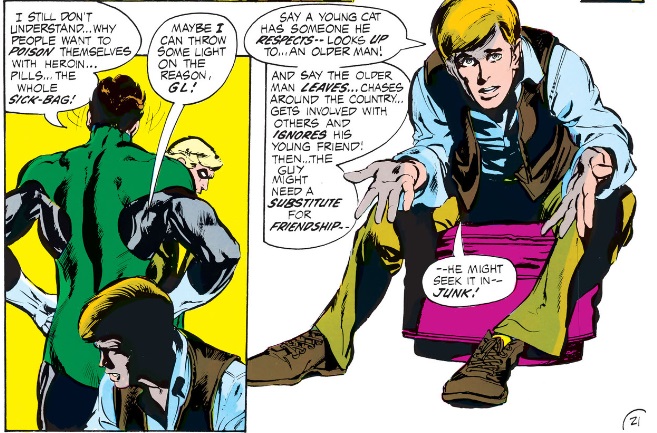 After a botched mugging in which he was shot with a crossbow, Green Arrow grew suspicious after recognizing the arrow as his own and noticing his ward and parter Roy Harper (a.k.a. Speedy) had gone missing, while Oliver abandoned him to travel crosscountry with Hal. They sought to put an end to the local drug racket, and found Roy in the company of the two muggers – teenage junkies looking for a fix. Ollie believed Roy had gone undercover to infiltrate the drug ring, completely ignorant to the fact that Roy was an addict himself. When Oliver finally learns the truth, he throws Roy out in a fit of rage. Green Lantern finds Roy in an alley and takes him to Dinah Lance to help him kick his habit. It's to O’Neil’s credit that he depicts a fallen teen hero with compassion and pity, and makes Green Arrow, the ostensible hero, pig-headed and callous. 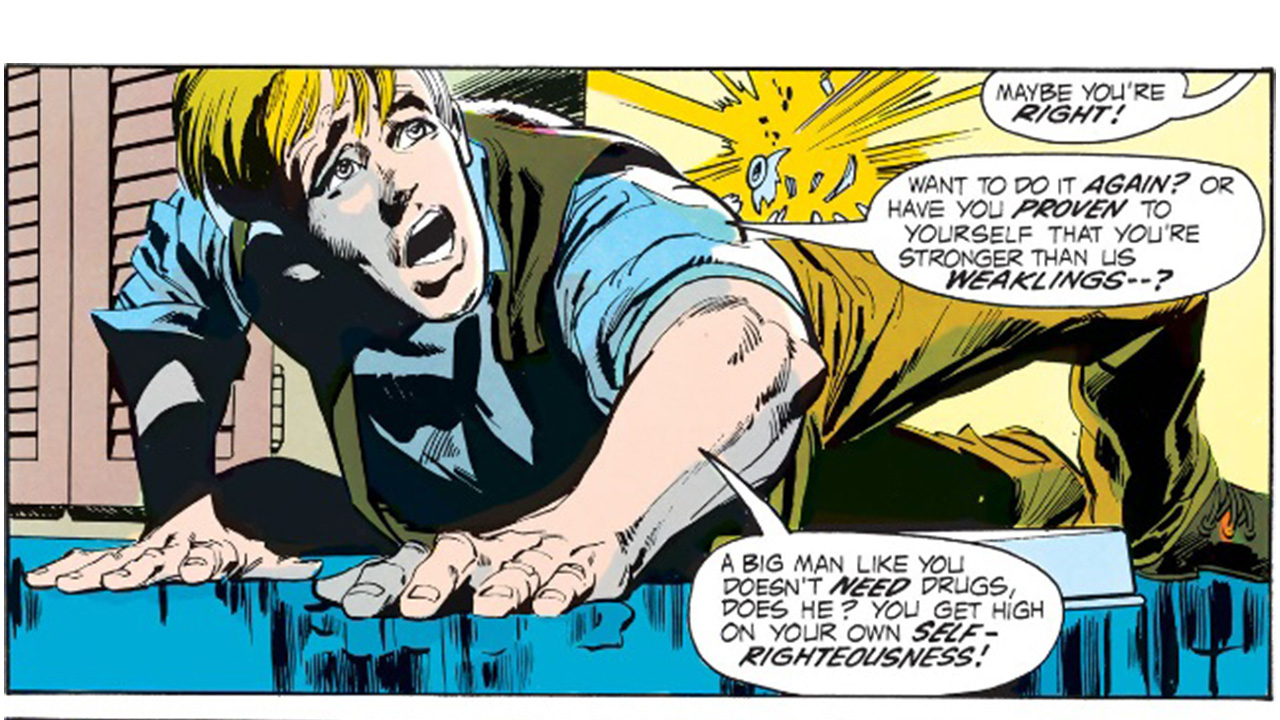 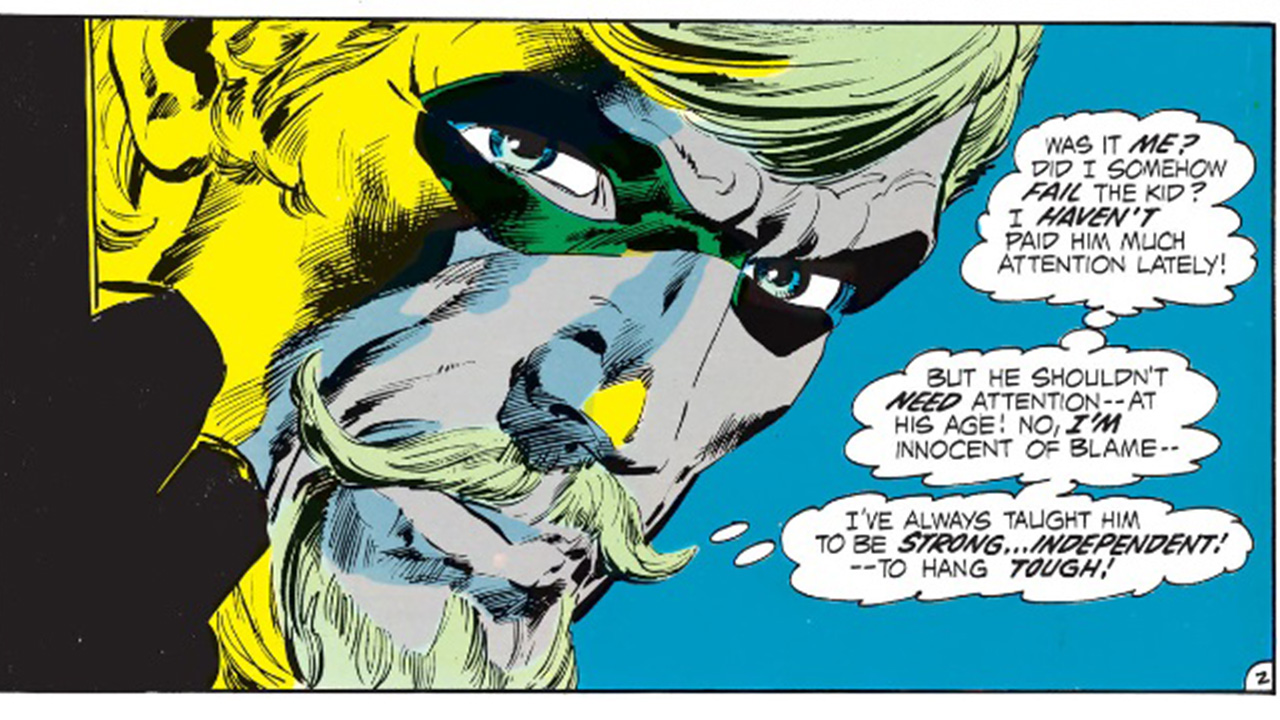 It’s through Ollie’s reaction that Roy gains the will to endure withdrawal and beat his addiction. But this is the end of their partnership, as Roy is less than appreciative of his mentor’s behavior, crediting Black Canary and Green Lantern for helping him. This wears on Oliver for the rest of the run, chipping away at his confidence and seeding pangs of guilt which fester at pivotal points in his career. Throughout the series O’Neil gave Oliver a condescending, unenthusiastic view of crimefighting. He often called it “ego-tripping," and saw little benefits it afforded a world beset by prejudice, poverty and human indifference. A respite out of his slump came in the form of a call to run for mayor. Oliver had no clue what to do, and resorted to asking the advice of his friends and teammates in the superhero fraternity. 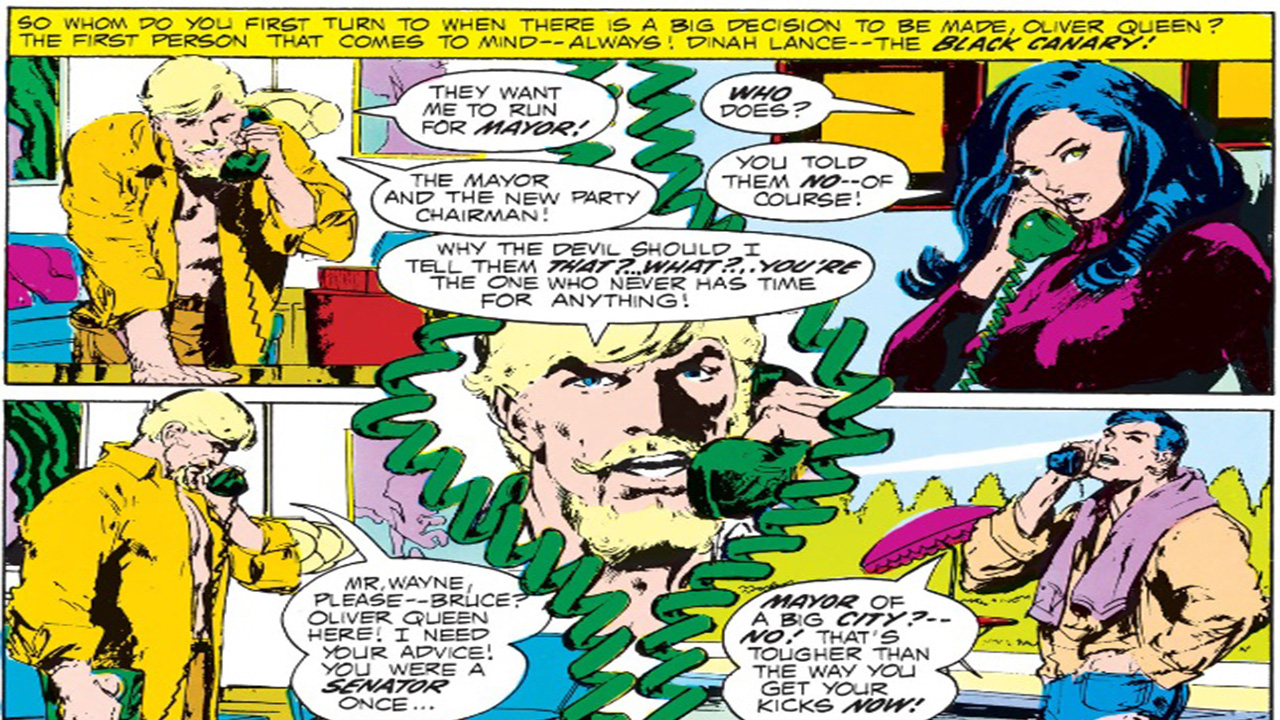 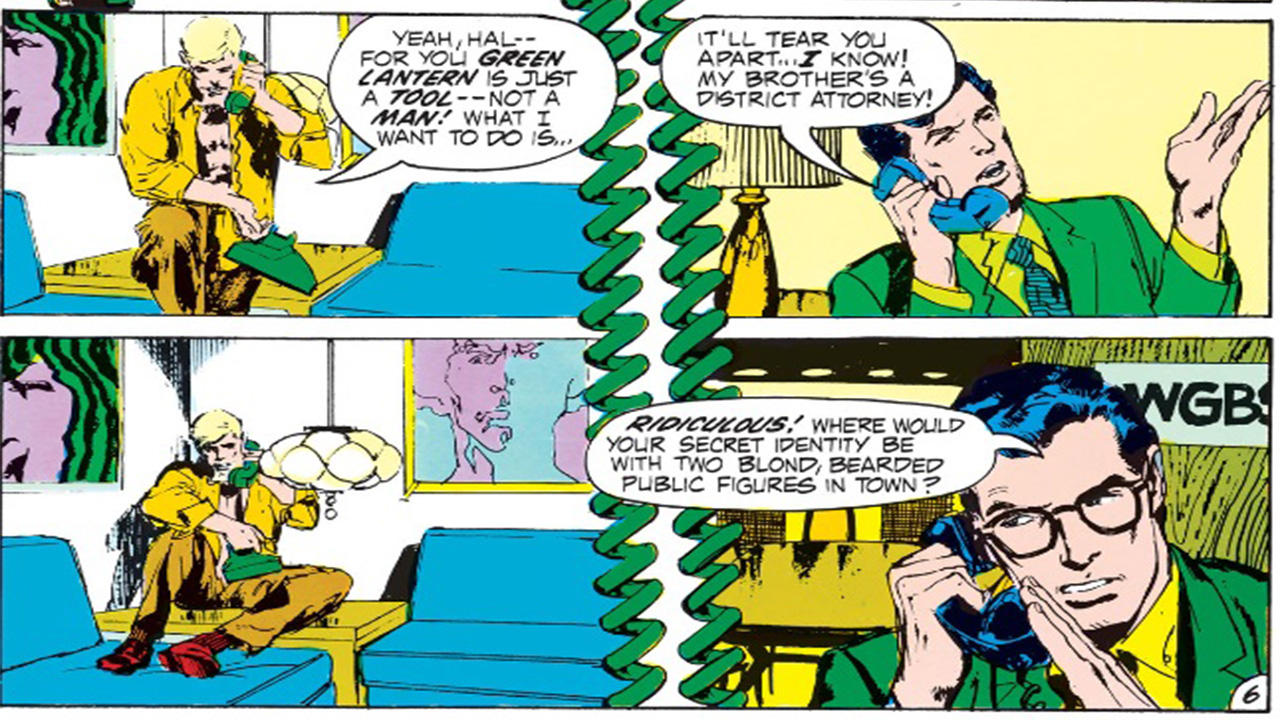 As he wanders over to meet with Dinah, Green Arrow finds himself in the middle of a riot on the South End of Star City. He witnesses a little boy felled by a stray shot, and though he rushes him to the nearest hospital, the boy dies. Ollie’s consumed with grief and decides to run for mayor. Yet this development isn’t followed up on, as the series was soon cancelled. Oliver would eventually become mayor after the events of Infinite Crisis, but that was a good thirty-five years down the line. 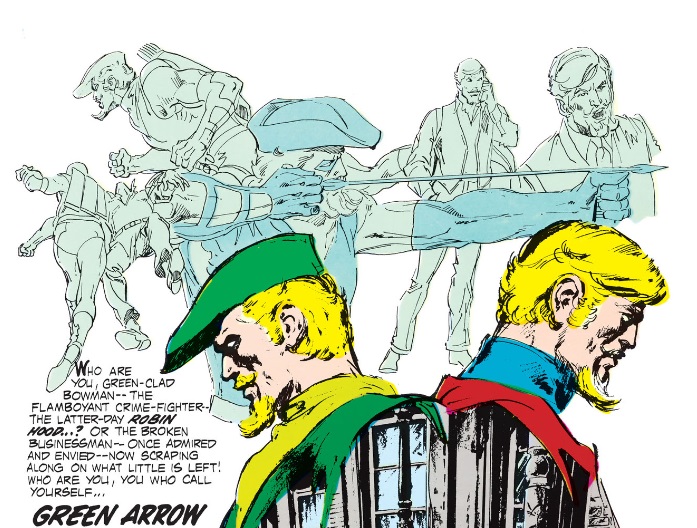 In the years that followed, Green Arrow went through a number of changes to his character. From the acclaimed Mike Grell's Longbow Hunters to The Dark Knight Returns to his New 52 series, but his days as a fighter for social justice have never strayed far from fans' minds. It was this version of the character that was brought to life in Justice League: Unlimited and the DC shorts, and the mayoral plot even found its way into TV's Arrow. While Oliver’s politics have varied in their intensity from version to version, his hotheadedness, his pride, his ego, and his willingness to help the downtrodden have become staples of his character since 1971. Dennis O’Neil's stamp on Green Arrow has become so fondly remembered, that few people can name many Green Arrow comics preceeding the goatee era. The Robin Hood incarnation became his most celebrated characterization, and ultimately served to enrich and diversify the personalities of superheroes across the DC Universe.

What's your favorite Green Arrow story? Let us know in our Community!