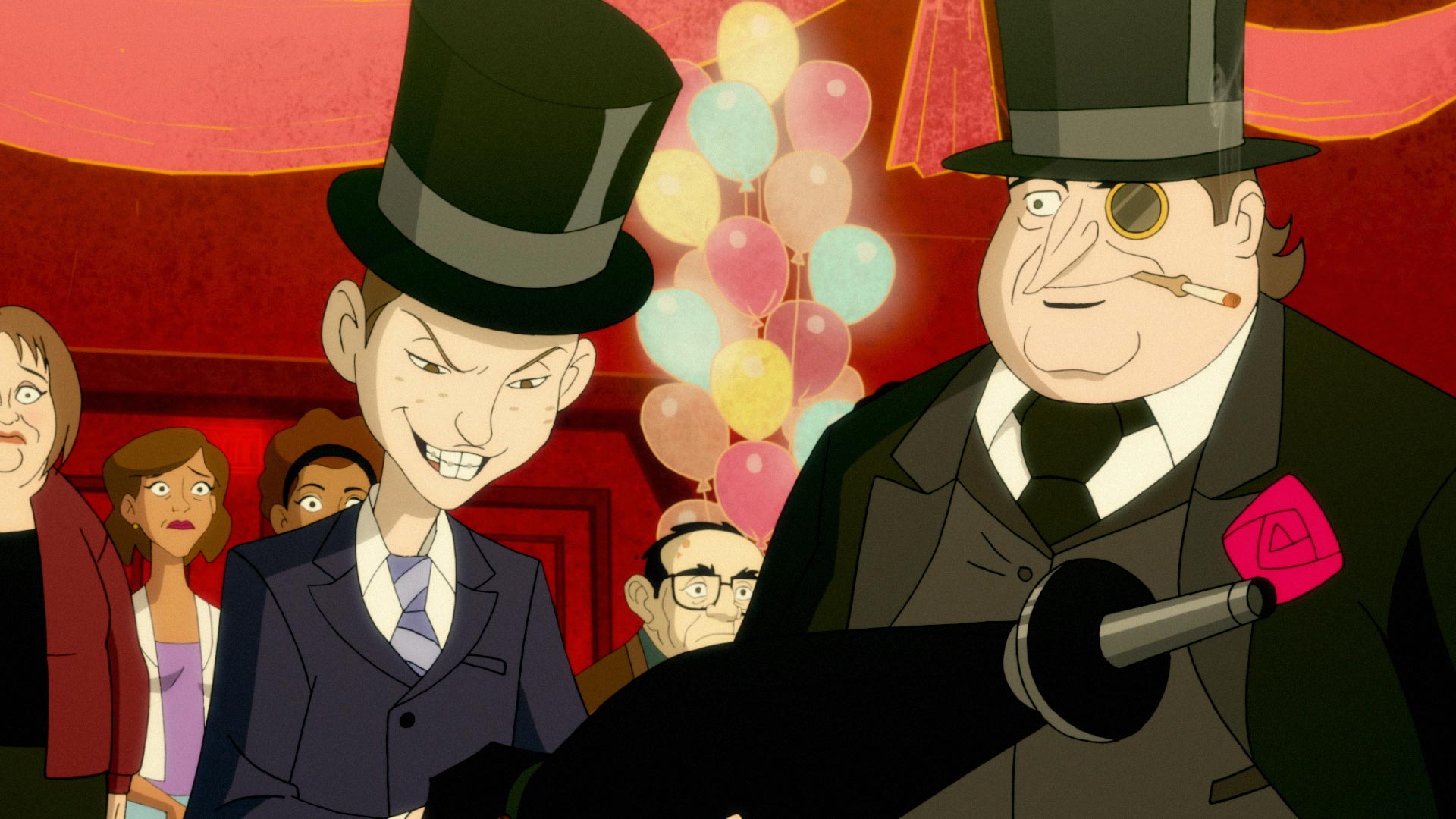 The Flock of The Penguin: A DC Universe Investigation

In latest episode of DC Universe’s Harley Quinn, we celebrated the Bar Mitzvah of Joshua Cobblepot, nephew to casino owner and Gotham underworld kingpin Oswald Cobblepot — better known to the likes of Batman and his allies as the Penguin. The festivities provided a smashing debut for Harley’s solo career in villainy, but also taught us a couple of important things about The Penguin:

First, his family is apparently Jewish. (Or at least it is here.)

Second, he has a nephew — one we’ve never seen before, until now.

So where did young Joshua come from, exactly? Who else do we know in the Penguin’s family? How deep does his waddle roll? (Fun fact: the collective noun for a group of penguins on land is a “waddle.” But at sea, they’re called a “raft.” You’re welcome.)

The very first record of the Cobblepot family appears in Gotham Academy: Second Semester, where we learn of Edmunde Cobblepot – a pre-revolutionary settler of Colonial New Jersey along with the Dent family who burned Amity Arkham at the stake as a witch (which, in Edmunde’s defense…she was).

The next record we know about is from Gotham Underground. There, we learn that when the revolution for American independence did arrive, the traitorous Cobblepot family sided with the British — including Nigel Cobblepot, who served as a commander of the British navy until their empire conceded victory for the United States. We also learn of Nathan Cobblepot, who followed in his forebears’ military background, but this time chose the right side of history as a Union colonel who defended a young Gotham City in the Civil War.

Through the 19th century, the Cobblepot family gained great power and influence in Gotham as one of the founding families responsible for its architectural splendor and ambition as a financial capital of the East Coast. Wise investments in the steel industry were responsible for a significant portion of the Cobblepot estate. The rest, naturally, was earned in back alley deals and underhanded business practices which have long defined the Cobblepot name. We learn in Gotham Academy that the young Millie Jane Cobblepot sought to expose the corruption which her family was sowing through Gotham during this period. But her family callously discredited her claims by having her committed to Arkham Asylum. (The students of Gotham Academy claim that her ghost haunts the grounds to this day, forever seeking justice.)

Artifacts which can be found in the video game Batman: Arkham Origins introduce us to the man who Millie Jane may have been seeking to discredit: the notorious war profiteer Henry Cobblepot, who placed early investments in the growth of Gotham City so that he might call in favors to build profitable munitions factories within the city. His rivalry with one of the city’s main architects, Cyrus Pinkney, would culminate in Henry’s demise, when Pinkney arranged for his extortionist bankroller to perish in what some speculate to be the very first fatal automobile accident.

But Henry was survived by his son, the illustrious Theodore Cobblepot: mayor of Gotham City in the 1880s, in the days when Jonah Hex roamed this untamed nation. The extent of his connections to the Court of Owls remains unconfirmed… but they were certainly content to keep him as a figurehead.

Not much is known about the Cobblepot family between then and the generation before Oswald’s birth – with the exception of Old Lady Wedgwood, a Cobblepot by birth and noted philanthropist. It seems like as a general rule, the women of the Cobblepot family turn out quite differently than the men.

This brings us to Penguin’s parents, Tucker and Esther Cobblepot: names which were first given to the wealthy couple by the film Batman Returns. Tucker, like many Cobblepots before him, was a fowl-tempered father, and mistreated young Oswald terribly. But the sickly Esther, even at her most infirm, was always kind to him -- as was Tucker’s sister, Miranda Cobblepot, who put Penguin through his university education. (Sometimes, it’s Miranda who’s cited as Oswald’s actual mother, but that particular theory is now considered apocryphal.)

In the must-read limited series Penguin: Pain and Prejudice, we learn that young Oswald was one of four siblings: Jason, William, and Robert. Tormented by his father and brothers for his deformed appearance and unwilling to share his mother’s love, young Oswald orchestrated their deaths individually at an early age -- ever perpetuating the cycle of scheming, violence, and betrayal which has always been synonymous with the Cobblepot name.

The Gotham television series provides a completely different take on Penguin’s origin story, as the bastard son of the wealthy Elijah Van Dahl (played by Paul Reubens, who incidentally also played Tucker Cobblepot in Batman Returns) and his Eastern European cook, Gertrud Kapelput. Though Oswald was taken in by his birth father, the entire Van Dahl family would perish as he was reborn under the anglicized name of Cobblepot.

So whose son is Joshua Cobblepot? Maybe in the continuity of Harley Quinn, one of Penguin’s brothers lived long enough to have a child before Ozzy had him killed (as he no doubt was -- otherwise, wouldn’t he have shown up for his own son’s Bar Mitzvah?). But that’s not to say the Penguin family ends there. In Hope Larson’s Rebirth-era Batgirl run, we’re introduced to Ethan Cobblepot -- alias Blacksun -- the Penguin’s own illegitimate child turned super-villainous tech mogul. And in the future of Old Lady Harley, we see Penguin survived by a waddle of “Pengants,” human/penguin mutant offspring of the Penguin who rove through a post-apocalyptic DC Universe.

Now, we know what you’re thinking: how did Penguin manage to have half-human, half-penguin children? Well… perhaps the less said about Oswald’s dearly departed wife, Penny Cobblepot, the better.

Are a Penguin fan? Or an admirer of the Cobblepot clan? Let us know in our Community!