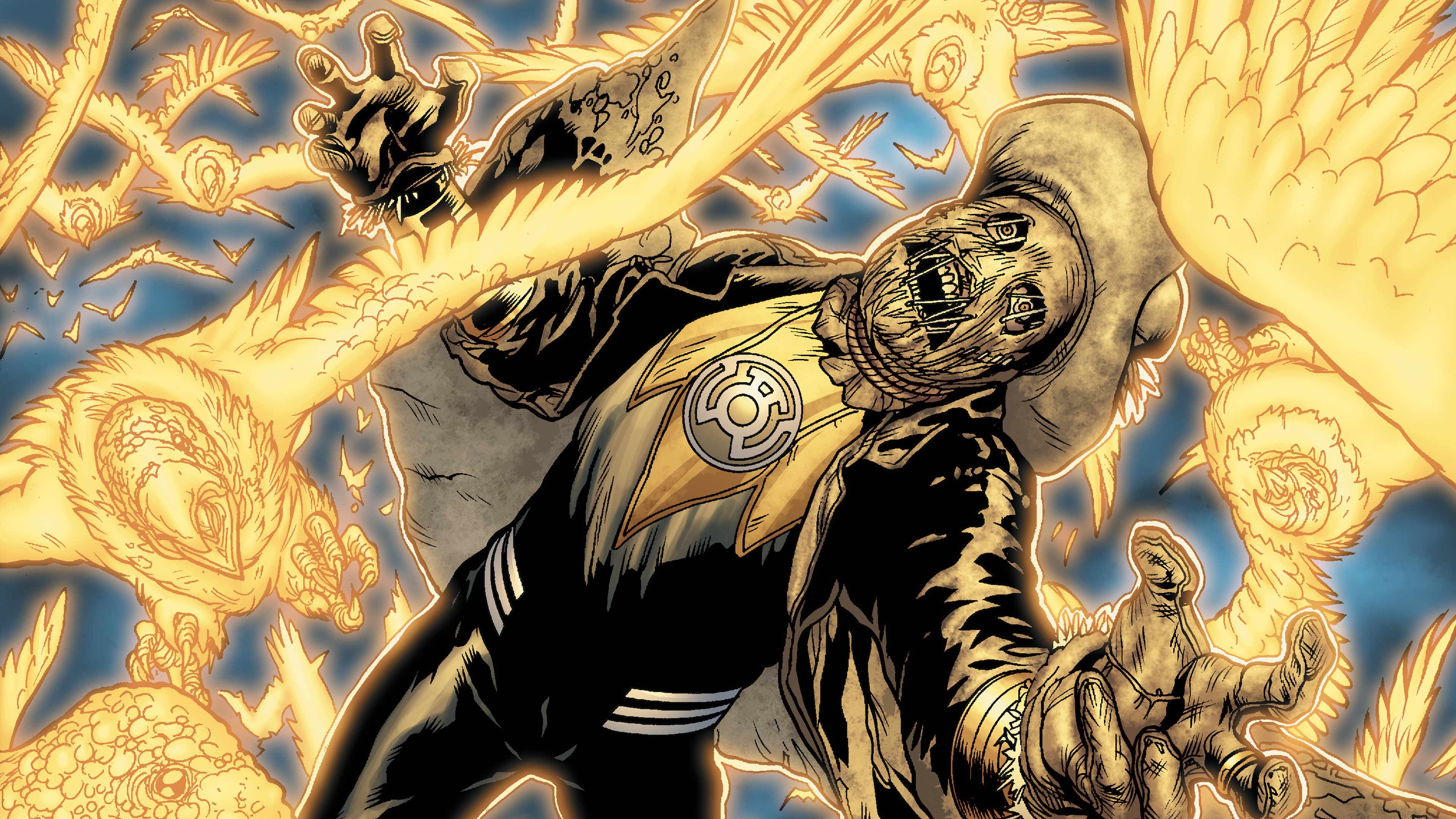 In blackest day, in brightest night,

Beware your fears made into light.

Let those who try to stop what’s right,

Thaal Sinestro, once considered the greatest member of the Green Lantern Corps, was a Korugarian with a vision. His proposal that it was not through force of will that a disparate, chaotic universe could be brought to harmony, but through fear. So naturally, when Sinestro set about establishing a Corps of his own, his recruits were all the scariest so-and-sos the universe had ever known. It never mattered to Sinestro if they shared his long term goals of peace and prosperity: they would all answer to him, and be his instruments of instilling a terror which, if properly deployed, could be tempered into compliance. This, in short, is how a plan for intergalactic peace devolved into an all-star collection of terrifying monsters. To illustrate, here are the top five most horrible members of the Sinestro Corps. 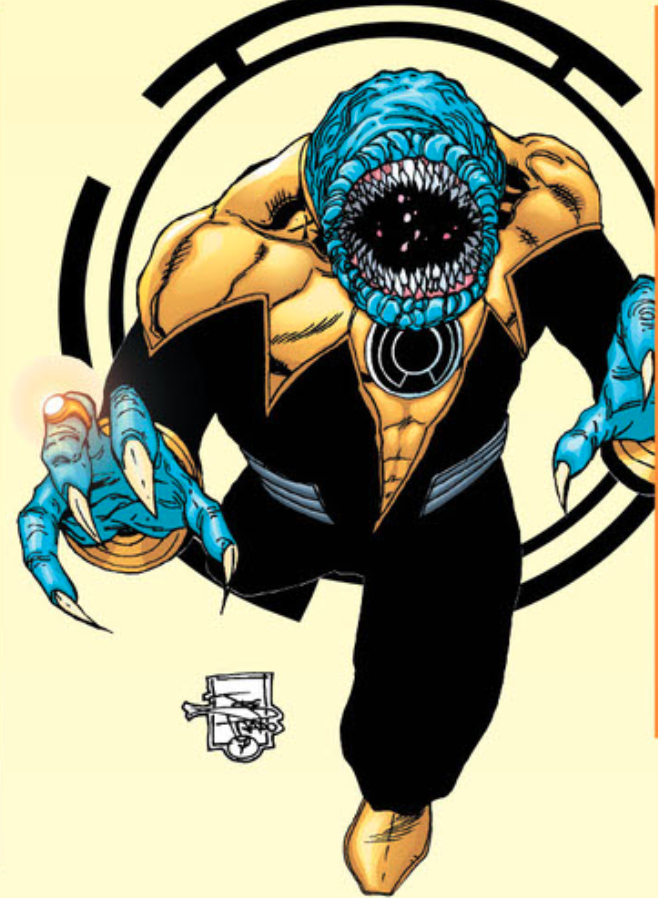 One of the most unsettling creatures in biological history is the lamprey, a tubelike worm which ends in a gaping maw with seemingly endless rows of teeth. Hundreds of millions of years old, these bloodsuckers still stalk the world’s freshwater seas, draining the life out of any unfortunate specimen to meet its jaws. Low, hailing from Universal Sector 3308, is basically a lamprey to the thousandth degree — with a dash of Alien thrown in for good measure. Known as the “greatest parasite in the universe,” Low is known for latching his enormous, toothy mouth onto unsuspecting victims, draining all their blood in a single, sickening slurp… and then depositing hundreds of eggs into their body, laying in wait to burst from the corpse and spread Low’s terror through the cosmos. And with a Sinestro Corps ring on his finger, this parasite’s reach is practically limitless. Don’t go into the water, and stay out of outer space. 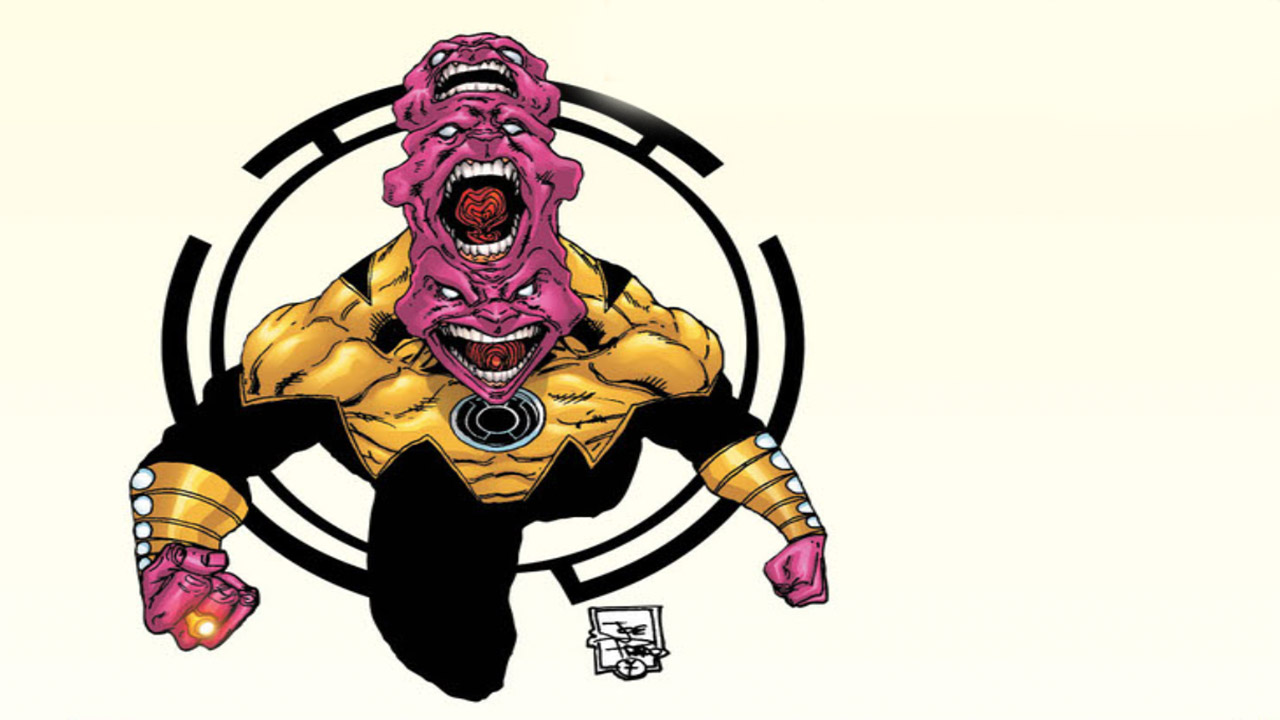 Some members of the Sinestro Corps are viscerally disturbing. Some inspire fear through an unfathomable capacity for cruelty. But others evoke terror through the mere existential quandary posed by their very existence. One such being is Maash, Sinestro Corpsman of Sector 863. Originally triplets in utero, Maash was subjected to a rare birth defect for his species where all three children were born into the same body, but with three heads stacked on top of one another. Everything Maash does is put to an internal vote by his three brains, with the will of the majority manifesting as action. And here, the problem arises: the top-most head of Maash is a kindly soul, sympathetic to all. But the other two are violent, psychotic killers. Thus, the topmost head of Maash is doomed forever to only watch in terror and despair as his body is subject to the tyranny of majority, torturing and killing all who would cross them. Bummer. 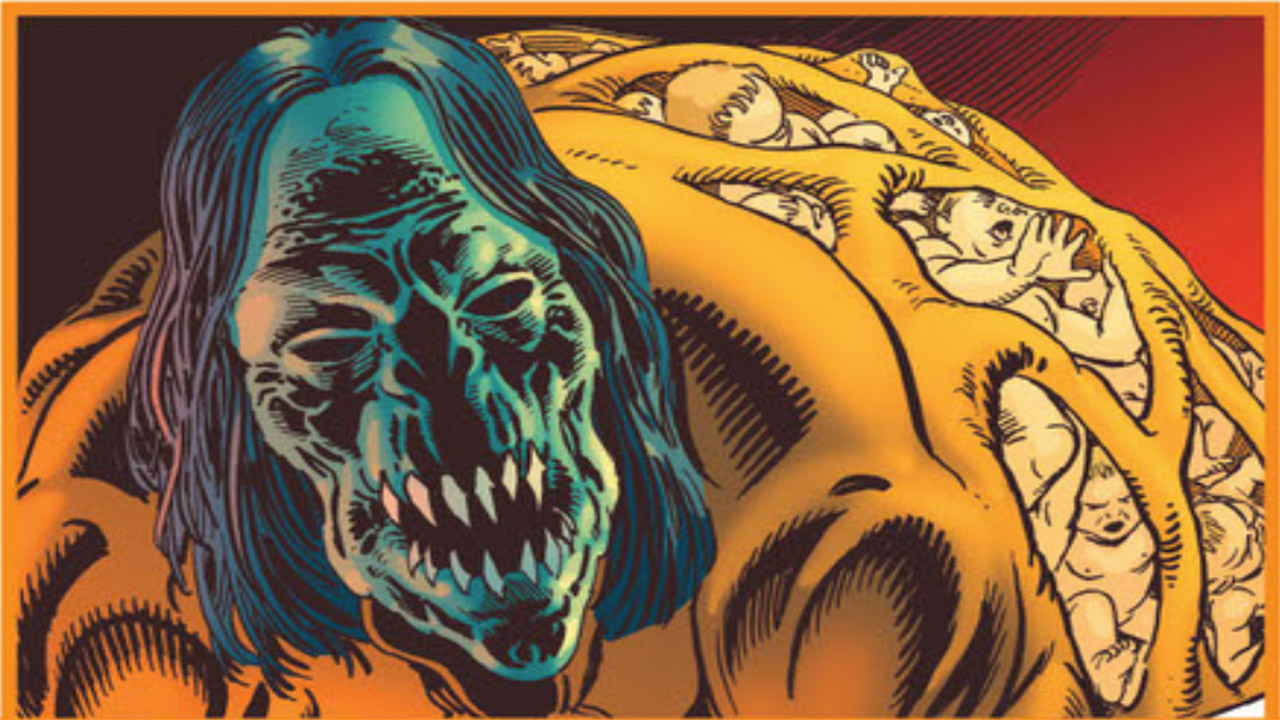 This Baba Jaga inspired Voranian of Sector 3599 doesn’t inspire fear through her visage, but by striking Sinestro’s enemies the Green Lantern Corps where it hurts most. Kryb knows that the Green Lanterns can claim to be fearless until they’re as blue as their Guardians; but the moment they start a family, that all goes out the airlock. Kryb invites terror into the stoic ranks of the Green Lantern Corps by going after their families while they sleep, and abducting their to live out the remainder of their short, miserable existence suffering in the bony cage she carries upon her back. But Green Lanterns in a family way can breathe easier now; the sick terror of Kryb was ended when she was slain by Guy Gardner in Blackest Night. 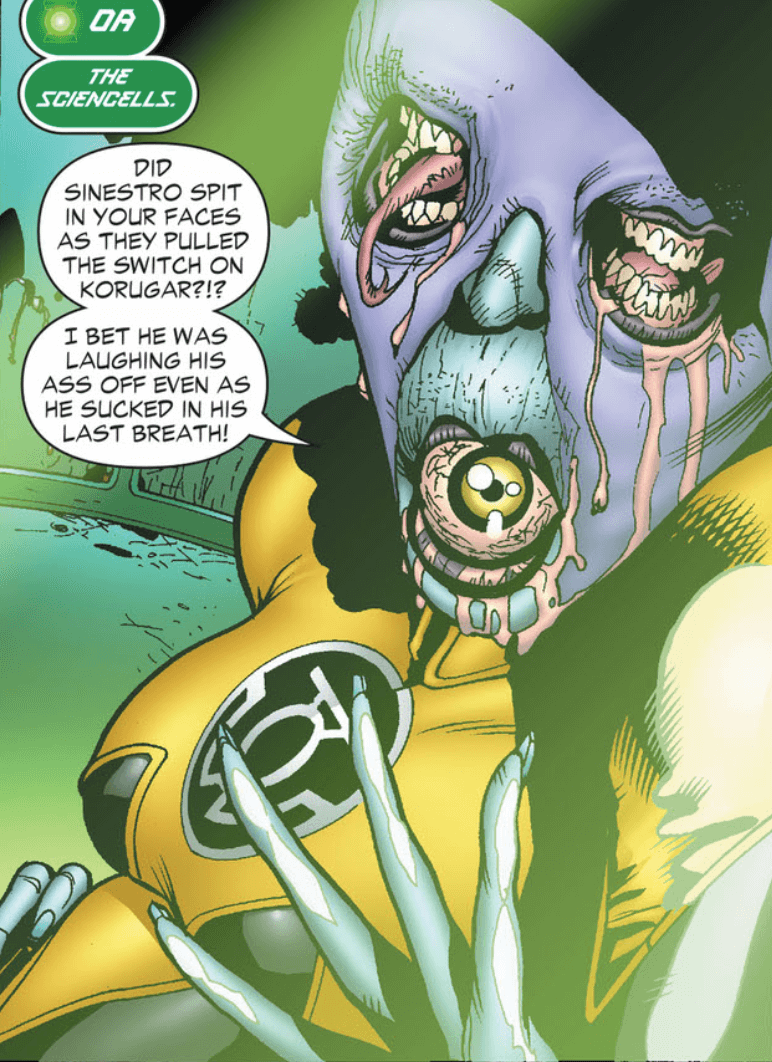 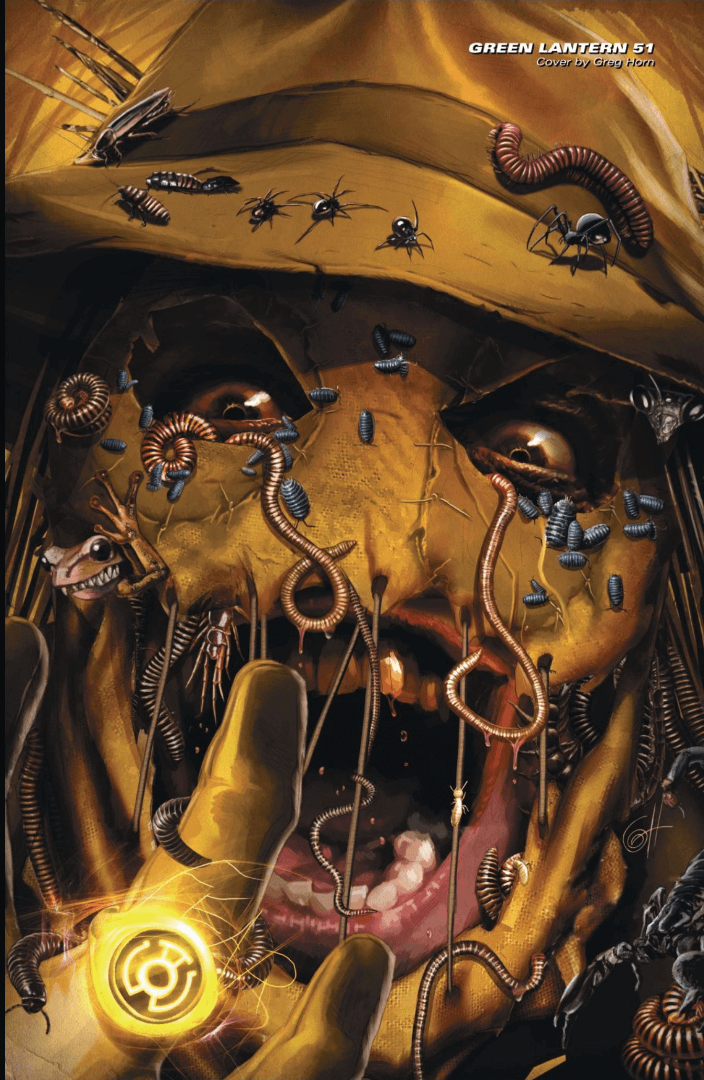 Newly minted Sinestro Corps members are told they have earned this honor in recognition of their “ability to instill great fear.” By this rubric, no one on Earth may be more qualified for Sinestro Corps membership than Earth’s greatest scholar of fear, Jonathan Crane. Originally passed over in Sector 2814 in favor of Amon Sur, neglected son of Abin Sur, Amon’s death marked the Arkham-bound Scarecrow as next in line for the honor: only for the ring to be intercepted at the very last second by the Green Lantern Corps. Since that night, the Scarecrow has carried a new mission in his dessicated heart: to claim the cosmic power of fear which was so temptingly laid before him. On two occasions, this drive was only bolstered by a temporary drafting into the Sinestro Corps, only whetting the fear-mongerer of Gotham’s appetite for terror. Scarecrow will stop at nothing to gain what he feels is rightfully his… and heaven help us all if he ever gets his way.