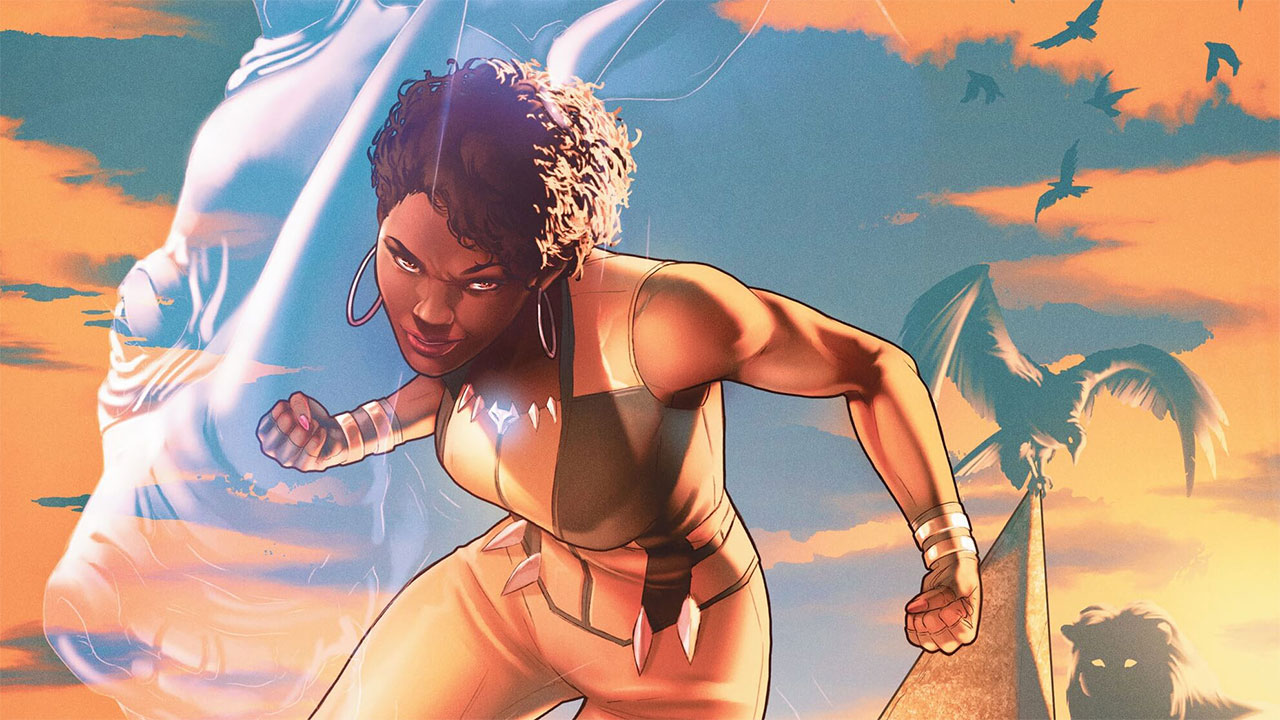 The Evolution of Vixen

Is she woman, beast, or both?! Thanks to her animal totem, Mari McCabe can be all three at once. Channeling all the powers of the animal kingdom, Mari is one of the most versatile heroes DC Super Heroes. She’s just as at home on the modeling runway as she is battling drug runners with the Suicide Squad or alien creatures with the Justice League. As part of DC Universe’s celebration of Black History Month, let's take a look at the history of the one and only...Vixen! 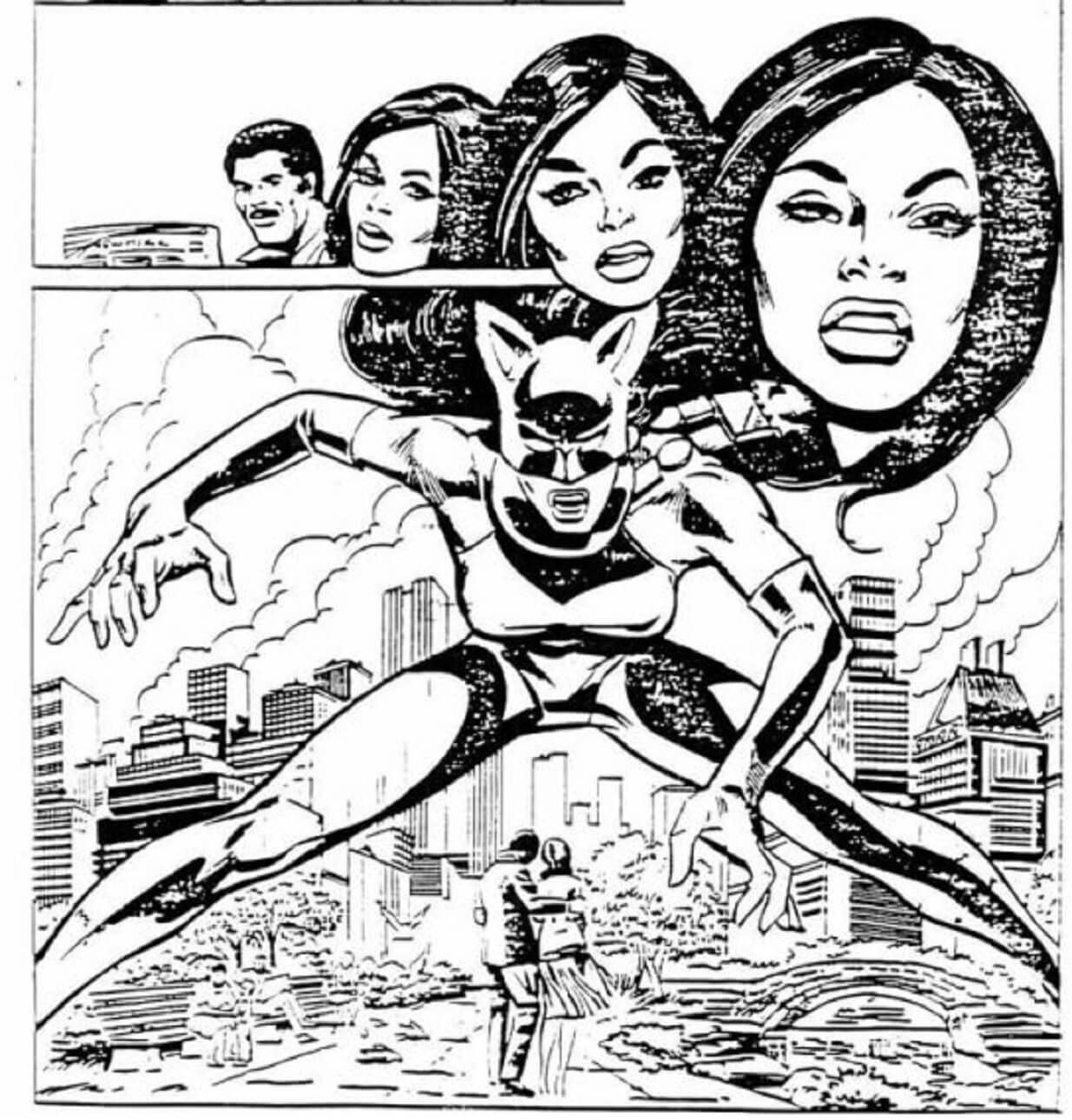 An early prototype of Vixen was first seen in 1978’s Cancelled Comics Cavalcade #2 (written by Gerry Conway and Carla Conway, penciled by Bob Oksner). This issue's story had a different version of Vixen’s name (Marilyn Macabe) and some of the details about her African village and family were different than what would be later established. The story was originally intended to be published in a Vixen solo title, but due to some cutbacks in DC’s publishing line, the series had been shelved. Because of the differences between this version of Vixen and the one who would eventually appear, DC later established that this story took place on Earth-32. 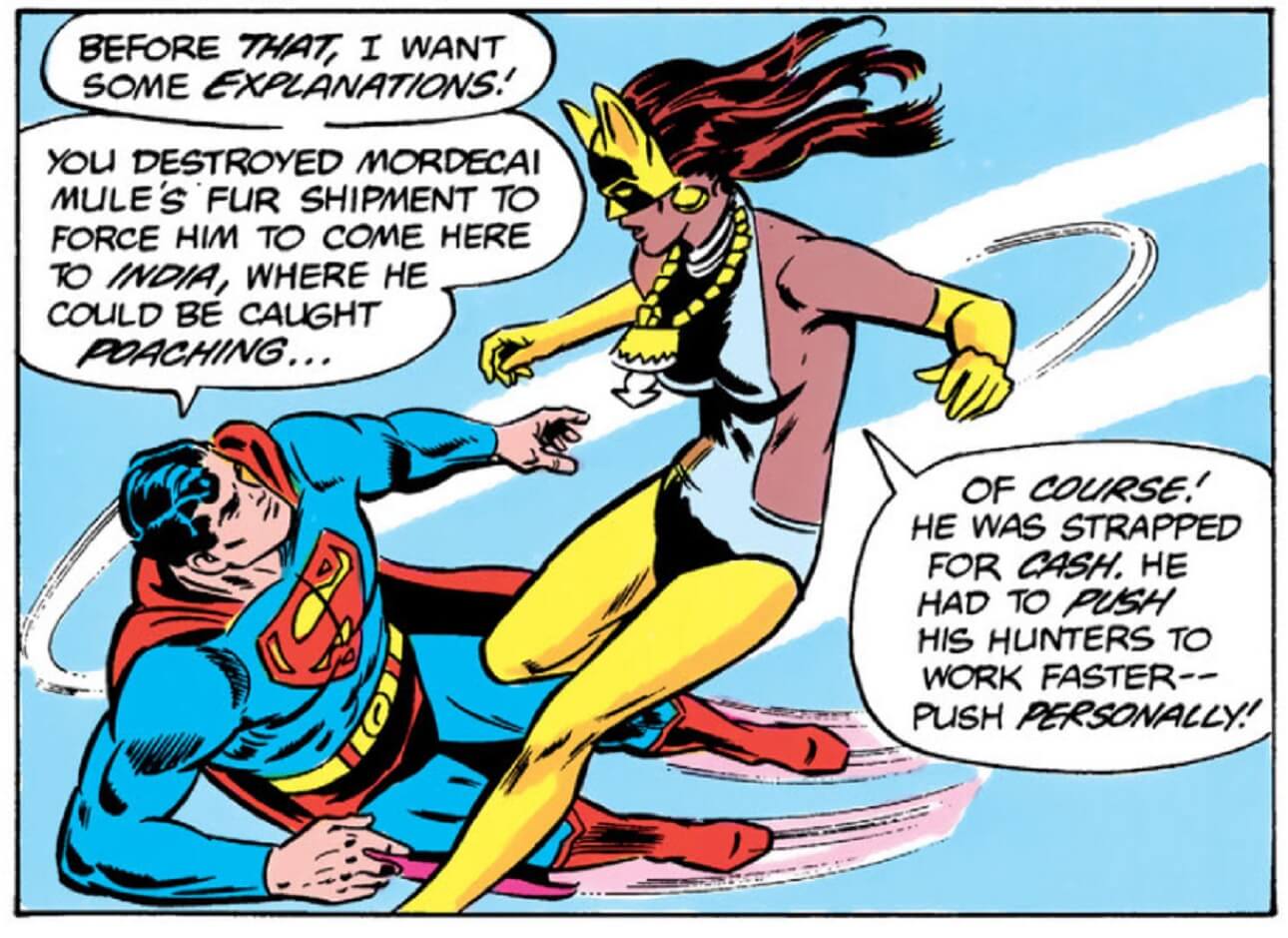 In 1981, Vixen was given a proper introduction in Action Comics #521 (written by Gerry Conway and penciled by Curt Swan). Marilyn Macabe (who would later be renamed Mari Jiwe McCabe) was a fashion model who used her mysterious totem necklace to channel the powers of any animal. While trying to topple a poaching operation, she had a run-in with Superman. The Man of Steel misunderstood her intentions and a battle broke out, in which Vixen’s totem was powerful enough to knock Superman off his feet. The two later settled their differences and worked together to bring down the poachers.

In their second team-up, Vixen and Superman took down Admiral Cerebrus, a technological madman who'd been using arcade machines to kidnap kids. Superman was impressed with Vixen’s abilities, but she remained guarded about her true origins and how her totem worked.

Readers would eventually learn that Mari was an orphaned girl from Africa, who had been given the Tantu totem. The totem had been passed down through Mari’s ancestors, granting its wearer the power to channel the abilities of any animal, such as the strength of a bear or the agility of a cougar. It would be later revealed that the totem's powers came from the ancient God Anansi. 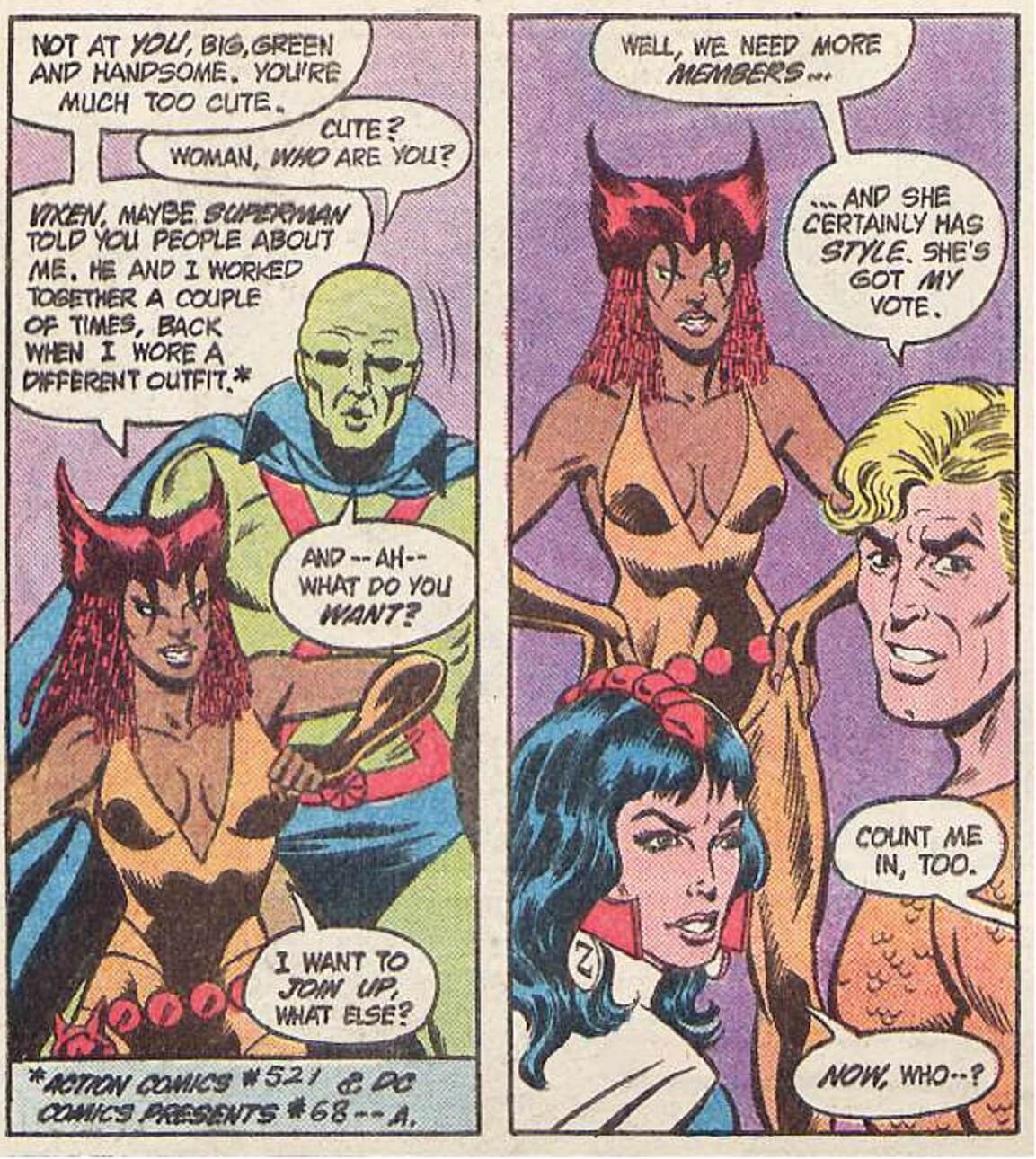 In Justice League of America Annual #2 (written by Gerry Conway and penciled by Chuck Patton), Mari donned a new costume and volunteered for membership. The Justice League had just gone through a reconfiguration, and was seeking new players, so Vixen was quickly accepted.

Vixen fit in well with the new Justice League and struck up a friendship with Zatanna. Readers finally learned more about her origins in Justice League of America #234 (written by Gerry Conway and penciled by Chuck Patton), when her uncle General Maskar resurfaced. Mari revealed that, years ago in Africa, her father had been killed by her uncle in a coup. The Tantu totem, which gave Mari her powers, was a family heirloom that General Maskar would stop at nothing to possess. Maskar was able to steal the totem from his niece, but since he wasn’t using it for pure purposes it turned him into a beast. Maskar lost his life battling his niece, who was able to regain the totem. Mari continued to serve with the Justice League, until the President of the United States ordered Martian Manhunter to disband the group. 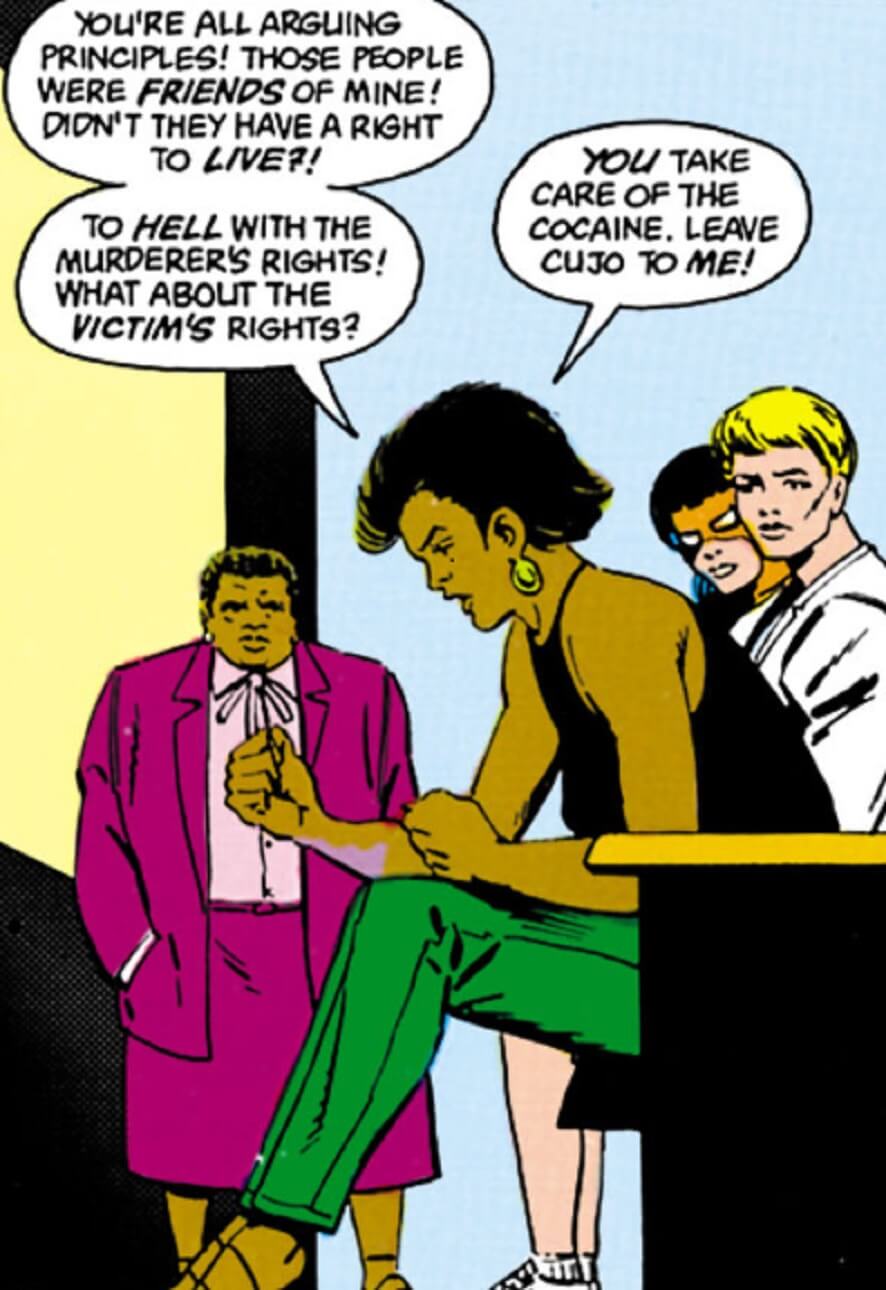 Although the Justice League eventually reformed, Mari took a break from superhero life. In Suicide Squad #11 (written by John Ostrander and penciled by Luke McDonnell) Mari decided to return to her modeling career, but her world was soon rocked when every member of her shoot was killed by drug smugglers. The photographers had accidentally taken photos which implicated the smugglers, and so they'd sought to tie up loose ends. Mari was the only survivor. She went to the government for help, and was referred to Amanda Waller.

Vixen joined Waller’s Suicide Squad for its resulting mission, and she decided to stay with the group afterwards. One of the things that kept her in Task Force X was Bronze Tiger, with whom Mari experienced a volatile on-again, off-again relationship. The Squad went through several configurations until Mari ultimately left the group behind, along with her romance with Bronze Tiger. 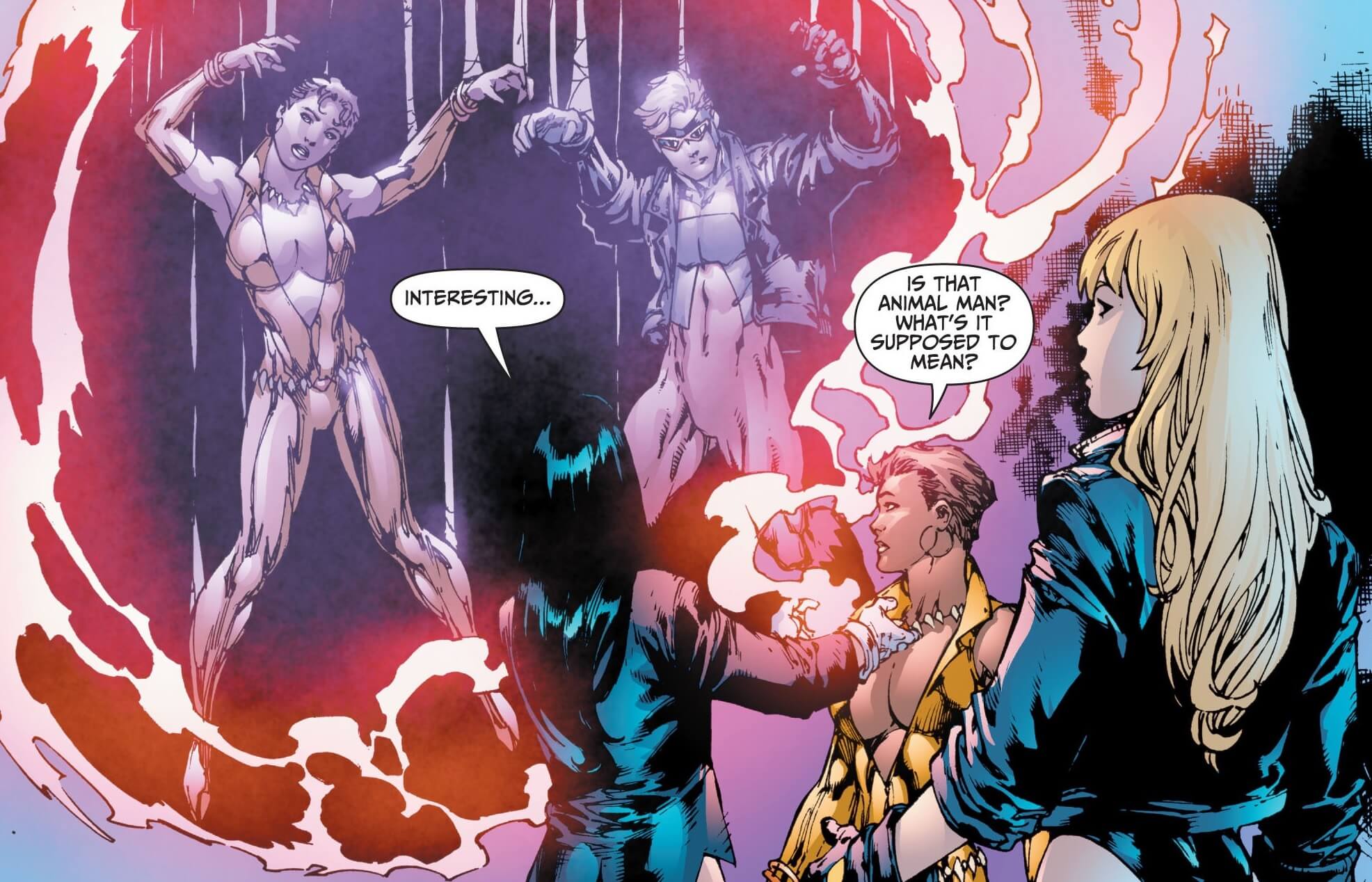 Without a permanent team, Vixen found herself assisting groups like the Birds of Prey, Checkmate, and Justice League Task Force for a few years. After a battle with Amazo, Vixen joined a new version of the Justice League of America. Around this time her powers started behaving weirdly. Thanks to the trickery of the African God Anansi, Mari found that she could now mimic the powers of other metahumans, causing her teammates' powers to slowly drain. During this period, Mari also found that she was able to use her powers without her totem. Anasi revealed that he was doing all of this to test Vixen for a future quest, and he restored her powers to normal, promising to call on her again soon.

In 2008, Mari was given her first lead feature with the limited series Vixen: Return of the Lion. In this series, Vixen journeys back to her African village and winds up defending it from an Intergang-funded warlord named Aku Kwesi. Aku was the man who murdered Mari’s mother, and, thanks to his Intergang benefactors, he now had powers similar to those of Vixen. Although the Justice League showed up to help, Mari insisted on defeating her mother’s killer on her own, in hand-to-hand combat. After finally taking down Kwesi, Vixen was able to get some closure regarding her mother’s death, and returned to America with her Justice League teammates. 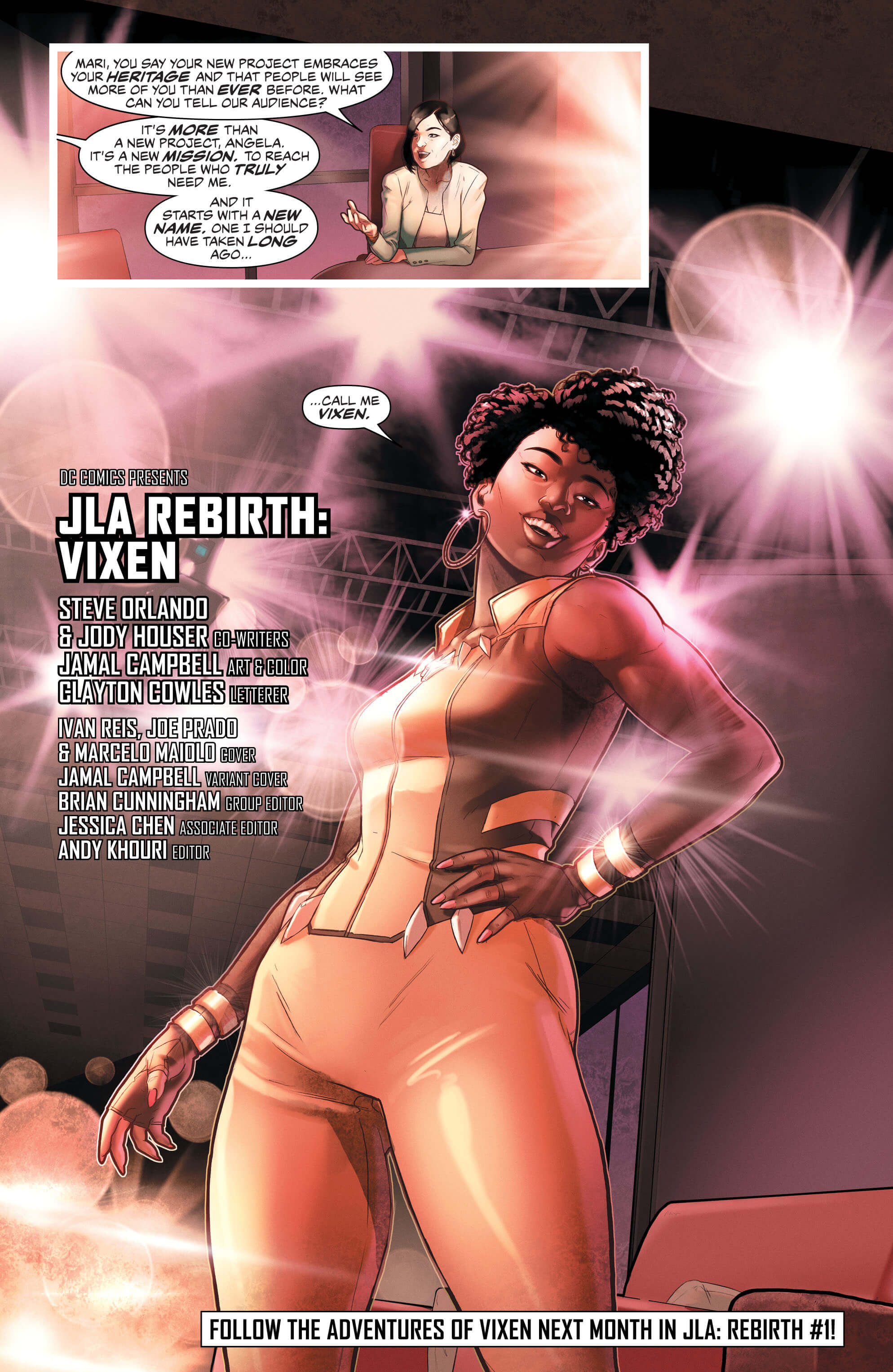 After the reality-altering events of 2011's Flashpoint, Vixen was next seen as a member of Justice League International in DC’s New 52 universe. She left the team after being injured and was replaced by her friend and fellow African Batwing.

In the Rebirth era, Mari joins a new version of the Justice League of America. She was given the spotlight in the one-shot Justice League of America: Vixen Rebirth (written by Steve Orlando and Jody Houser, penciled by Jamal Campbell), where her origin was retold with a few new alterations, due to the timeline changes. At the end of the issue, Mari reveals her superhero identity to the world in a talk show interview. 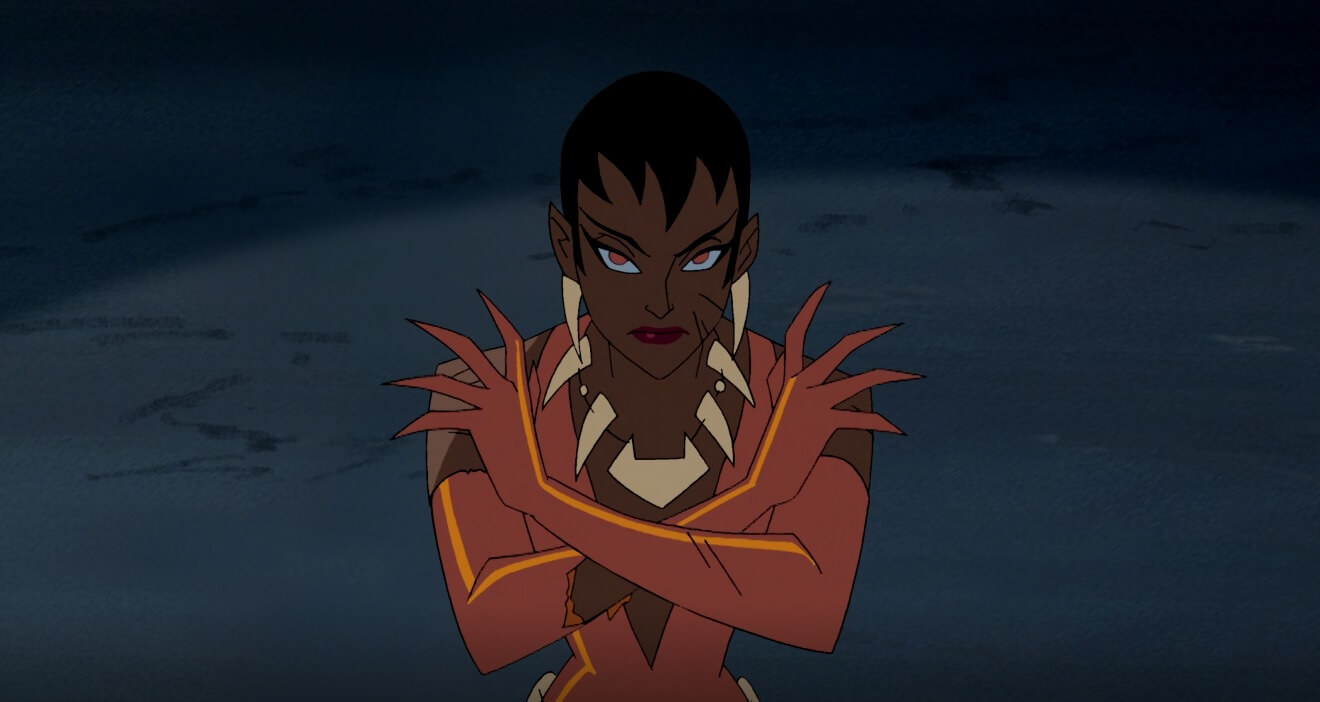 After a few cameo roles, Vixen (voiced by Gina Torres) made her first full animated appearance in the Justice League Unlimited episode “Wake The Dead”. In addition to fighting alongside the League, Mari found herself in the middle of a love triangle with Green Lantern and Hawkgirl.

Vixen (voiced by Cree Summer) also appeared in Batman: The Brave and the Bold, debuting in the episode “Gorillas in Our Midst”, in which she worked with the Caped Crusader to take down Gorilla Grodd. Mari has also had cameos in Teen Titans Go!, Justice League Action and DC Superhero Girls.

In 2015, Vixen was given her own feature in the Arrowverse’s first animated series, Vixen. Megalyn Echikunwoke was cast as Mari McCabe in the web series, and later reprised her role in live-action in the fourth season of TV's Arrow.

Mari’s grandmother, Amaya Jiwe (played by Maisie Richardson-Sellers), was added as a regular character to the second season of Arrow's sister show, DC’s Legends of Tomorrow. As Mari’s ancestor, Amaya also held the Tantu totem and Vixen identity. Ultimately, she left the Legends and her boyfriend Nate in order to return to her village and preserve the timeline (though Richardson-Sellers would later rejoin the series as another, lookalike character).

From the jungles of Africa to the concrete jungles of America, Vixen has prowled two worlds, as both a woman and an animal-powered superhero. She’s always ready for action, and her powers make her as unpredictable as her namesake. So there’s no telling where she'll appear next!

Are you a fan of Vixen? Let us know in our Community!