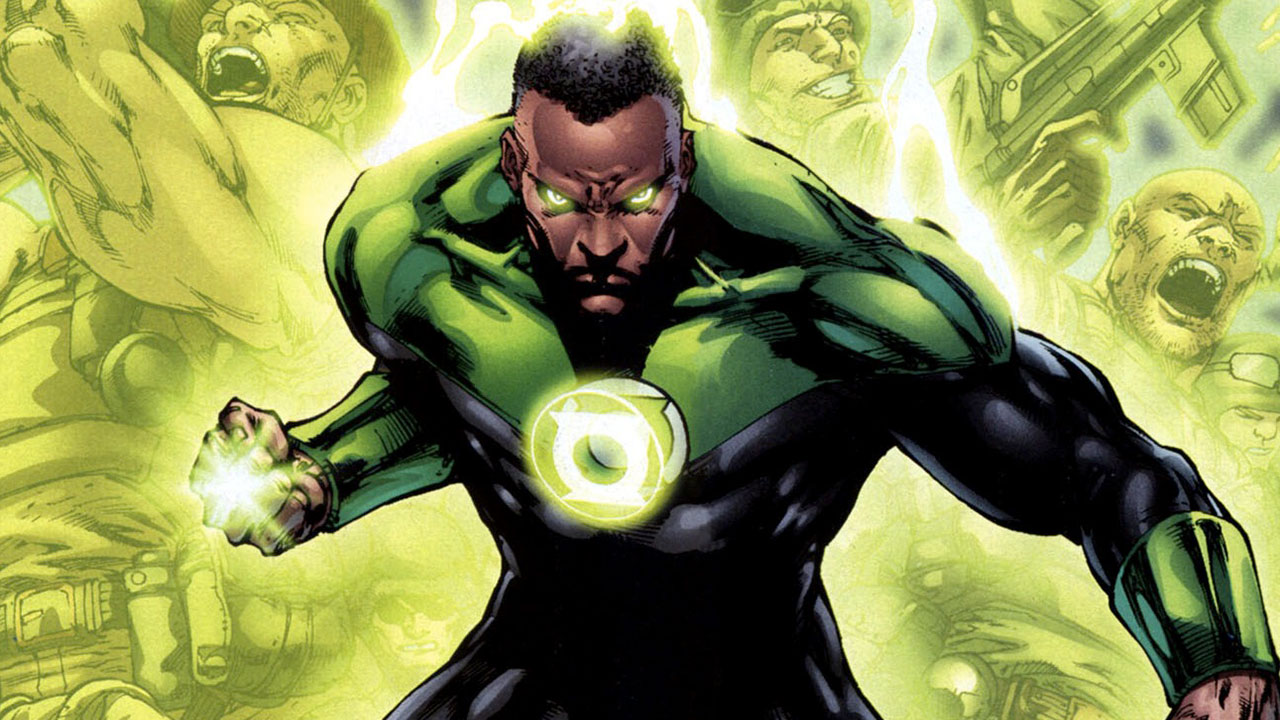 For many DC fans, the name John Stewart is synonymous with Green Lantern. He started off as a backup relief player, and eventually headlined his own comic book title. Throughout his history, he’s served as Earth's protector as well as that of other worlds. He's been a Darkstar, a Guardian, and an inspiration to fans for decades. But if for some reason you’re unfamiliar with John Stewart, then let’s take a look at why he's one of the most awesome DC Super Heroes ever...

John Stewart, DC’s first African-American Super Hero, first appeared in the pages of 1971's Green Lantern #87 (story by Denny O’Neil, art by Neal Adams and Dick Giordano). He was introduced when Hal Jordan and the Guardians were forced to find a backup Lantern for Earth. The Guardians chose a struggling architect named John Stewart and tasked Hal with training him. Hal found John rebellious and headstrong, and questioned the Guardians wisdom. John immediately made it clear he was going to do things differently from other Lanterns, like not wearing a mask to hide his identity and using his powers to humiliate a senator. Hal was ready to give up on John, until he realized he had used his intelligence to see through the politicians attempt to start a race war. Hal realized that as brash as his understudy seemed, John had the bravery and instincts to be a Green Lantern. 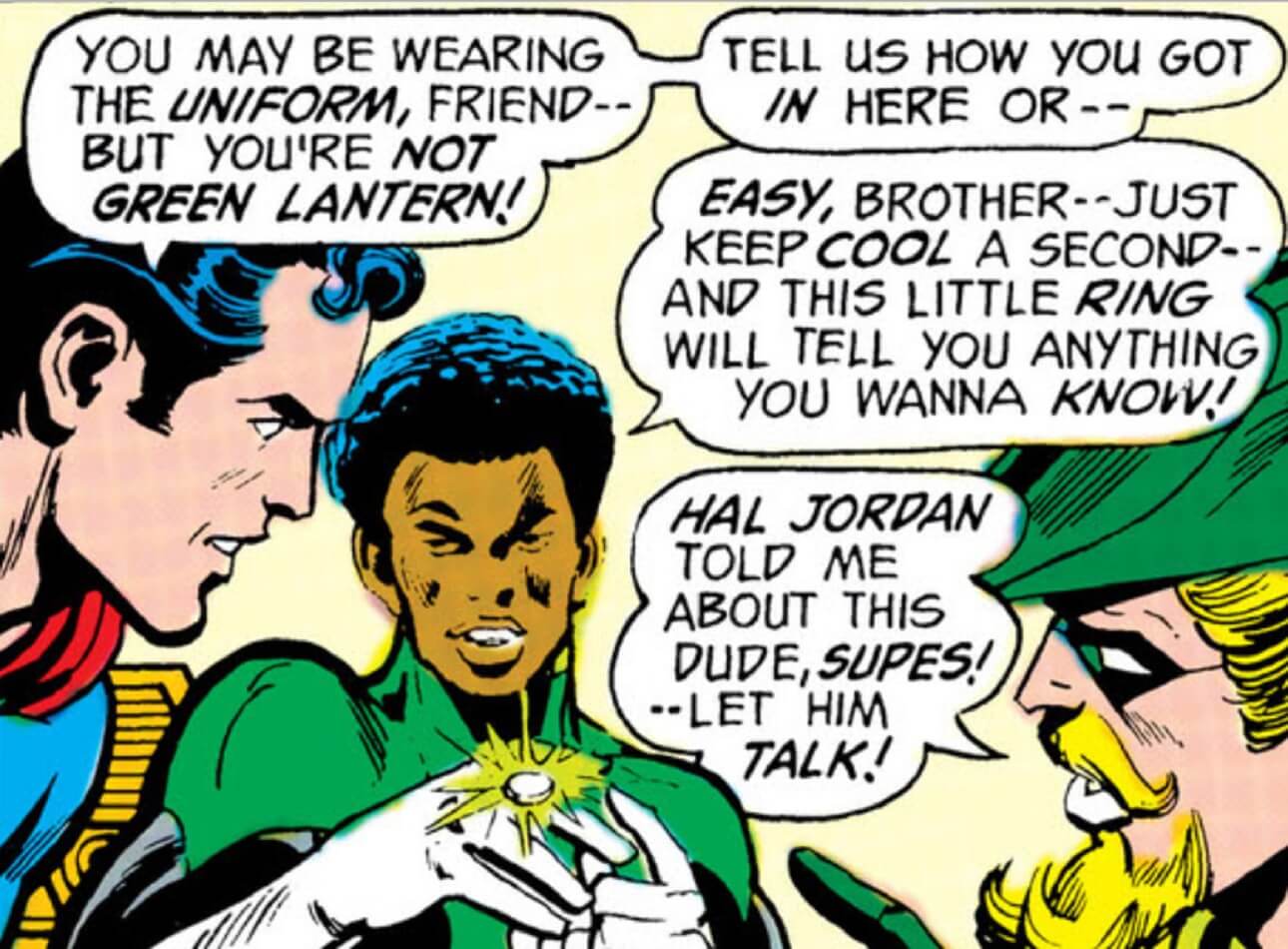 For the next few years, John was summoned by the Guardians whenever Hal was injured or unavailable. Because of John’s background as an architect, his power ring constructs were more elaborate than Hal’s, which were usually hollow objects. In Justice League of America #110 (written by Len Wein, art by Dick Dillin and Dick Giordano) Hal injured himself by slipping on a bar of soap while taking a shower. John then found himself working with the Justice League for the very first time. The team was weary of him at first, but after seeing him in action they grew to accept him. 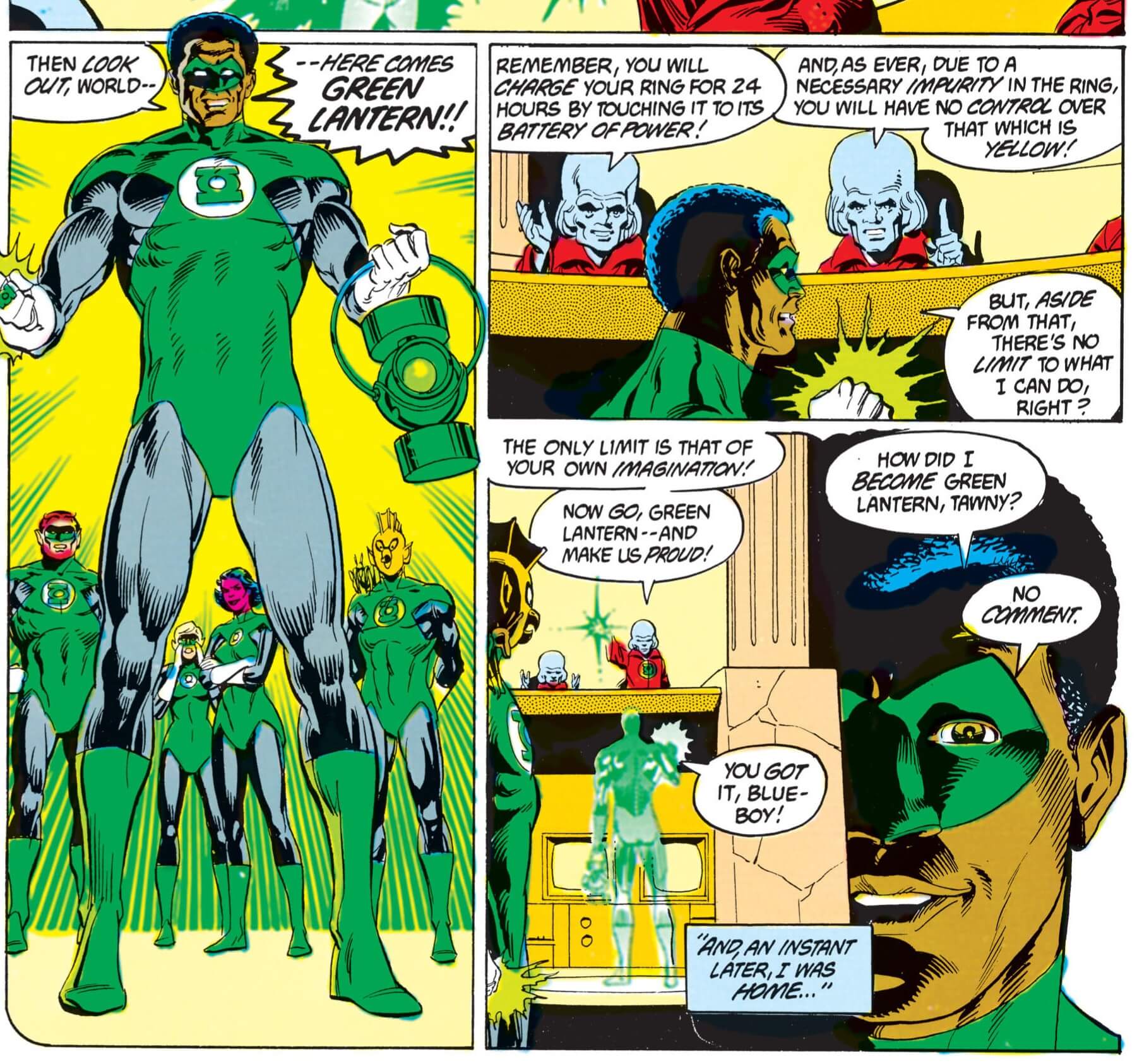 John’s professional career eventually improved and he landed a huge contract to rebuild Ferris Air headquarters. John met Hal Jordan, unaware that he was secretly a Green Lantern or that he had recommended Stewart for the contract. John Stewart’s back-up status was upgraded to that of a full-time GL in Green Lantern #182, after Hal Jordan gave up his powers for Carol Ferris. To honor Jordan, John’s costume now included a mask, which made reporters curious about his secret identity. John operated effectively as Green Lantern, winning the admiration of the media and superhero community, but he felt he needed more guidance.

John traveled to Oa to ask the Guardians for the name of his predecessor, so he could continue his training. The Guardians would not give up Jordan’s secret, so they paired him with another Lantern named Katma Tui. When John arrived back on Earth with Katma, he found out that his secret identity had been outed in his absence. Since, during his early days as Hal Jordan’s understudy, John had not worn a mask, a reporter had obtained enough corroborating statements from eyewitnesses to identify Stewart as Green Lantern. As a result, Ferris Air cancelled their contract with Stewart. John stopped using his mask, since it wasn’t a requirement for Lanterns and his identity was now public anyway. 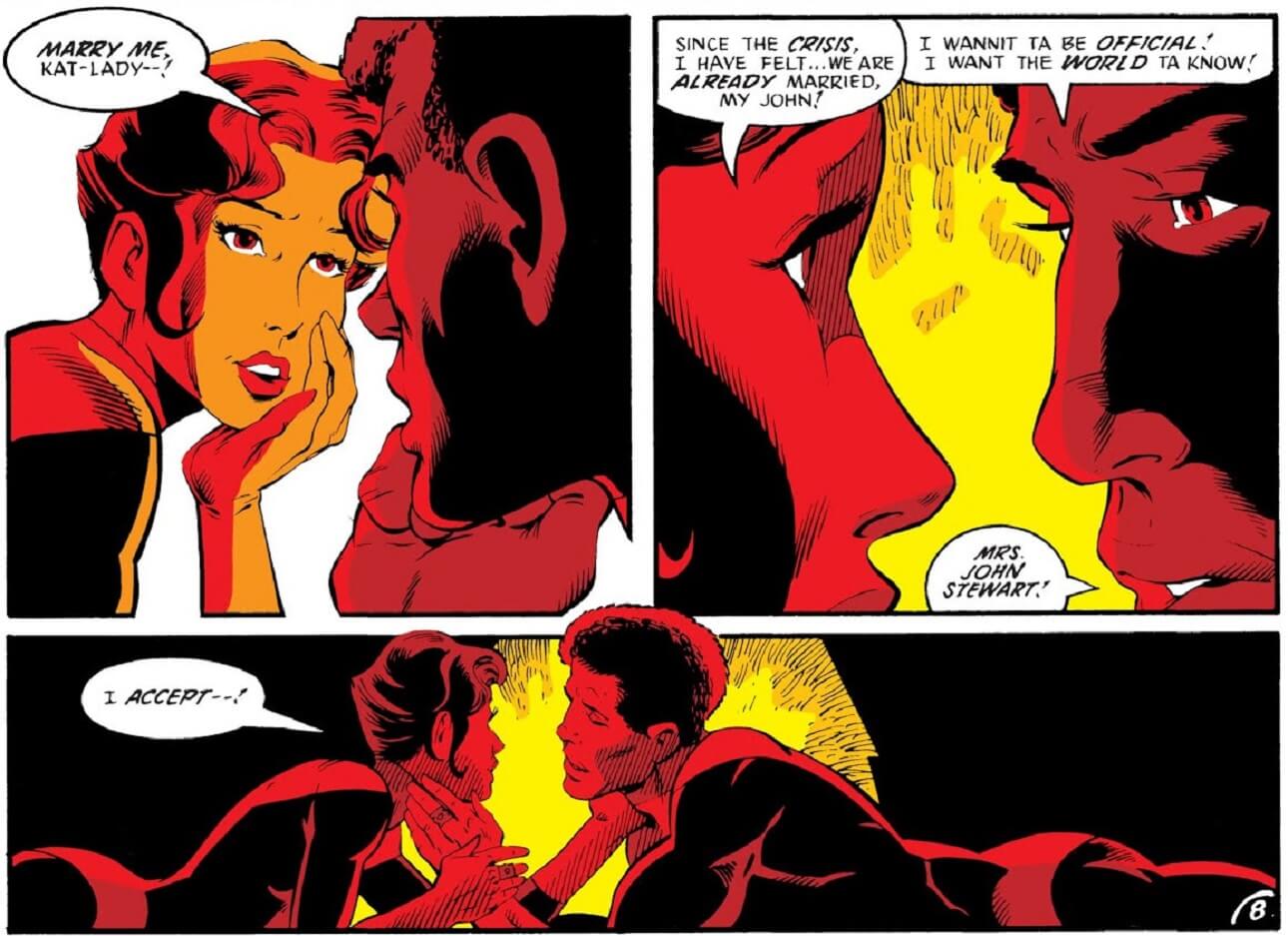 Katma continued to help John become a better Lantern, and along the way the two fell in love. Hal Jordan finally revealed his secret to John. Hal rejoined the Green Lantern Corps shortly thereafter, but John remained a Lantern. Since the Guardians were then leaving Oa, they decided to let the Corps self-govern, meaning that Earth was no longer limited to one Green Lantern.

John and Katma’s relationship grew as they served together in the reconfigured Corps, and in Green Lantern Corps #211 (written by Steve Englehart and penciled by Joe Station) he proposed to her. They were married on Superbowl Sunday, hoping the press would be too distracted to mob their wedding. 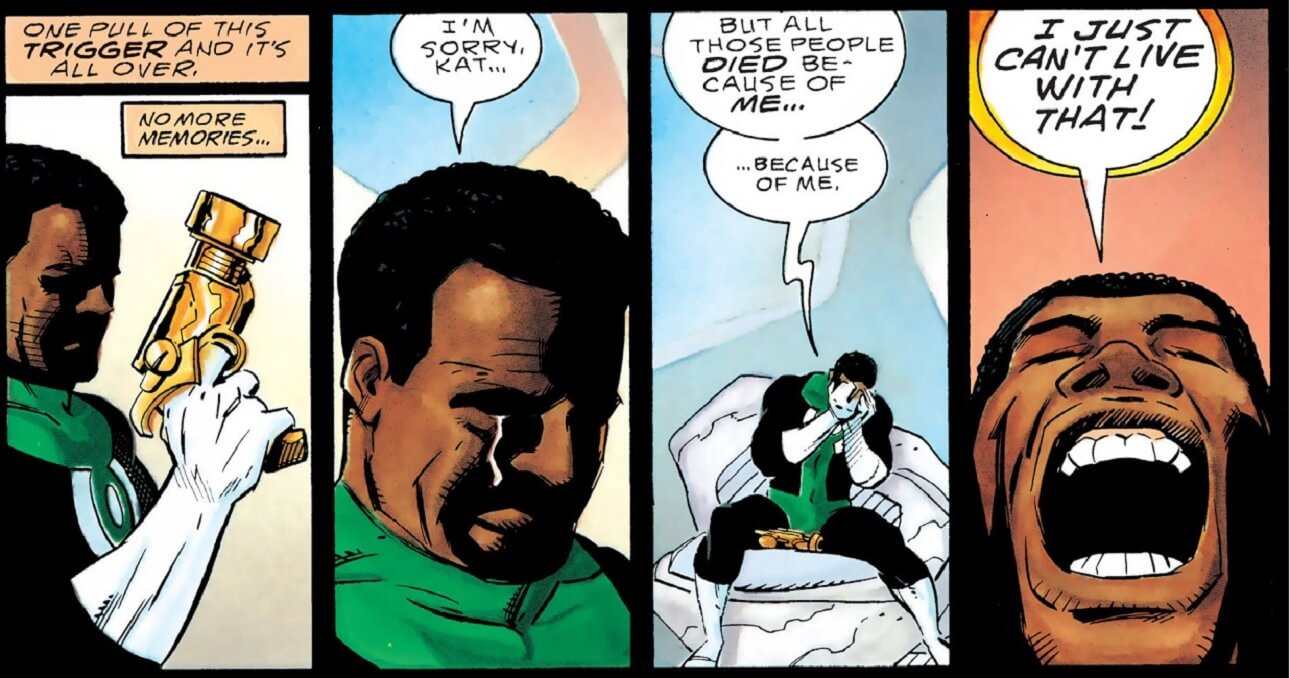 Unfortunately, John’s happy days soon came to an end. While on an intergalactic mission with Martian Manhunter, John thought he could save the planet Xanshi by himself, so he used his ring to send J’onn away. Stewart failed and the world with all of its inhabitants was destroyed. John took the loss hard and held himself personally responsible. Martian Manhunter gave John a pep talk, stopping him from committing suicide and convincing him to put himself back together.

When the Central Power Battery was destroyed in Green Lantern #224 (written by Joey Cavalieri and penciled by Gil Kane), John and Katma found themselves powerless and decided to live a quiet life on Earth. Unfortunately, John’s bad fortune continued when the evil Star Sapphire murdered Katma in Action Comics #601. John was inconsolable, and blamed Hal for his wife’s death, since Star Sapphire had done this to get his attention. Things got worse when Star Sapphire framed John for her own murder, causing him to be arrested. 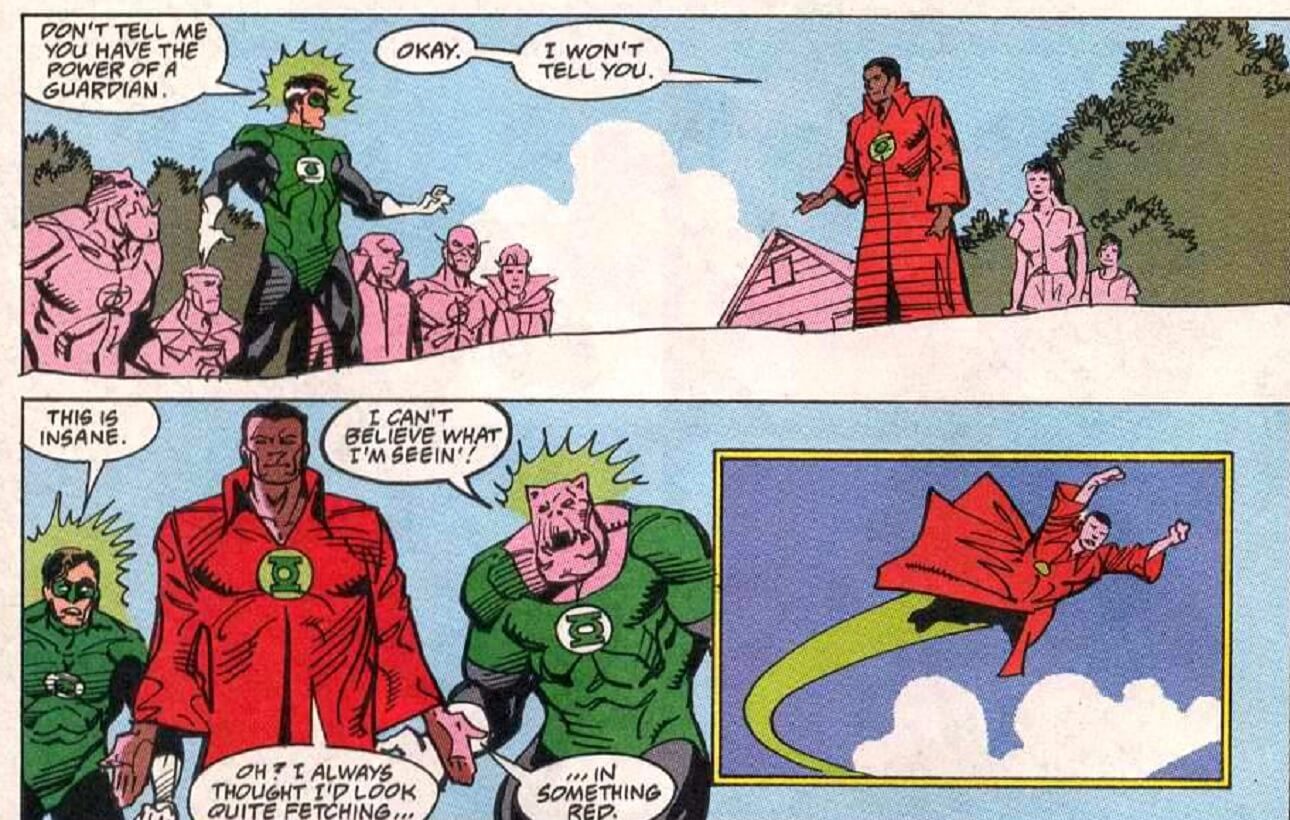 After John was cleared and got his power ring back, he was put in charge of the Mosaic World. This world was a mix of various sections of kidnapped cities from multiple planets transported to Oa by an insane Guardian. John saw the Mosaic as a chance to redeem himself for failing to save Xanshi and worked hard trying to get the different cultures to live in harmony. John’s background as an architect came in handy in building the world’s infrastructure, and he soon took on the name Master Builder. The Guardians gave John more power as a result of his success and he became one of the only mortal members of the Guardians of the Universe. Using his new powers, John was even able to channel Katma as if she was alive. Sadly, when the fear entity Parallax, using Hal Jordan as its host, destroyed Oa and the Green Lanterns' power source, John found himself powerless and lost.

With the Green Lantern Corps gone once more, John spent a period of time with the Darkstars, another intergalactic police force. While with the Darkstars, John found a new purpose and new love with his teammate Merayn Dethalis. A battle with the villain Grayven left John crippled, so he quit the Darkstars and returned to Earth with Merayn. Seeking to atone for some of the damage he'd done, Hal Jordan used his powers as Parallax to heal John. Kyle Rayner, who at the time was Earth’s only Green Lantern, gave John an extra power ring, making Stewart a Lantern once again. Merayn and John drifted apart during this time, and she left him. Despite this, John kept busy as Green Lantern, including a stint with the Justice League.

When Hal Jordan returned, and the Guardians reorganized the Green Lantern Corps, John served with Hal as Earth’s co-protector. No stranger to redemption himself, John helped Hal rebuild the Green Lantern Corps and atone for his actions hosting Parallax. During the “Blackest Night” storyline, John faced Black Lantern versions of Katma and the people of Xanshi, forcing him to overcome his two biggest failures. 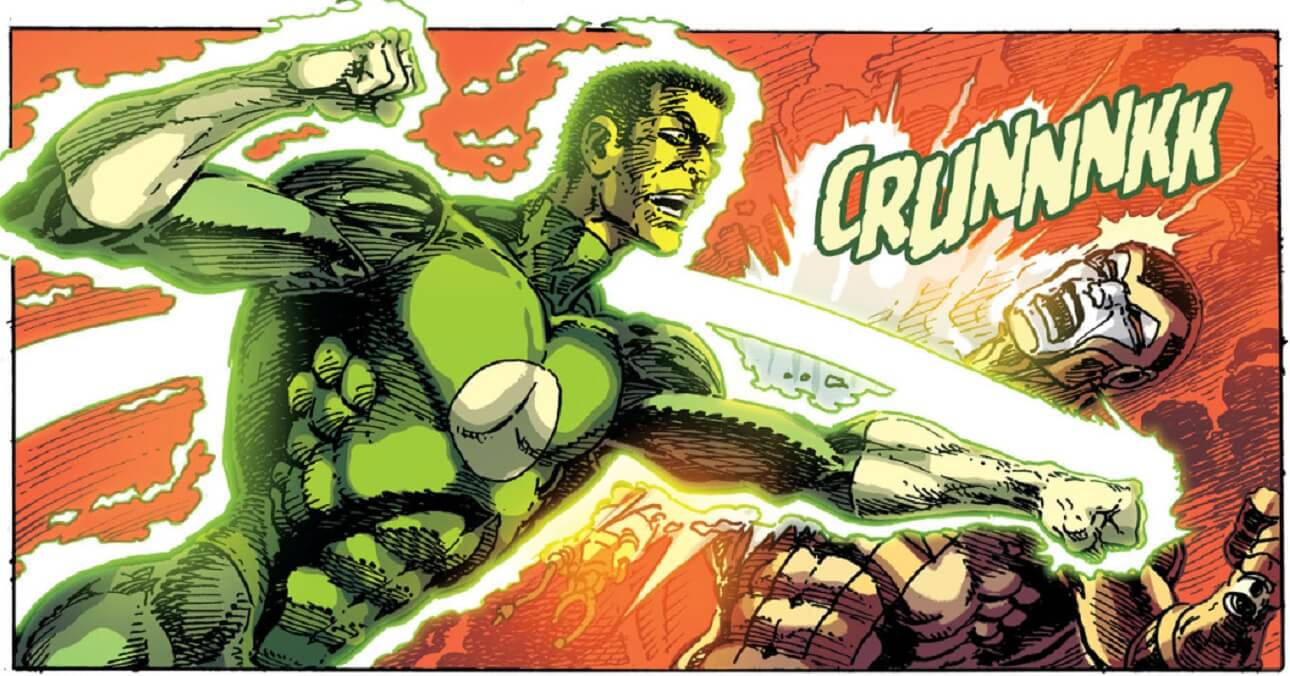 After the reality-altering events of 2011's Flashpoint, John Stewart received a new backstory, revealed in Secret Origins #9 (written by Van Jensen and penciled by Pat Broderick). This story detailed his rough childhood, his time in the Marines, and his discharge for his inability to deal with authority. In this new version of his origin, the Guardians tested John’s worth by sending a Manhunter to attack Ferris Air. When John fought back against the android, despite being a mere mortal, the Guardians saw he was worthy and made him a Green Lantern. Despite all the changes to DC history that occurred during the New 52 and the successive Rebirth era, John Stewart has consistently remained a loyal member of the Green Lantern Corps, in which he helps keep the galaxy safe to this day. He is also currently an active member of the Justice League. 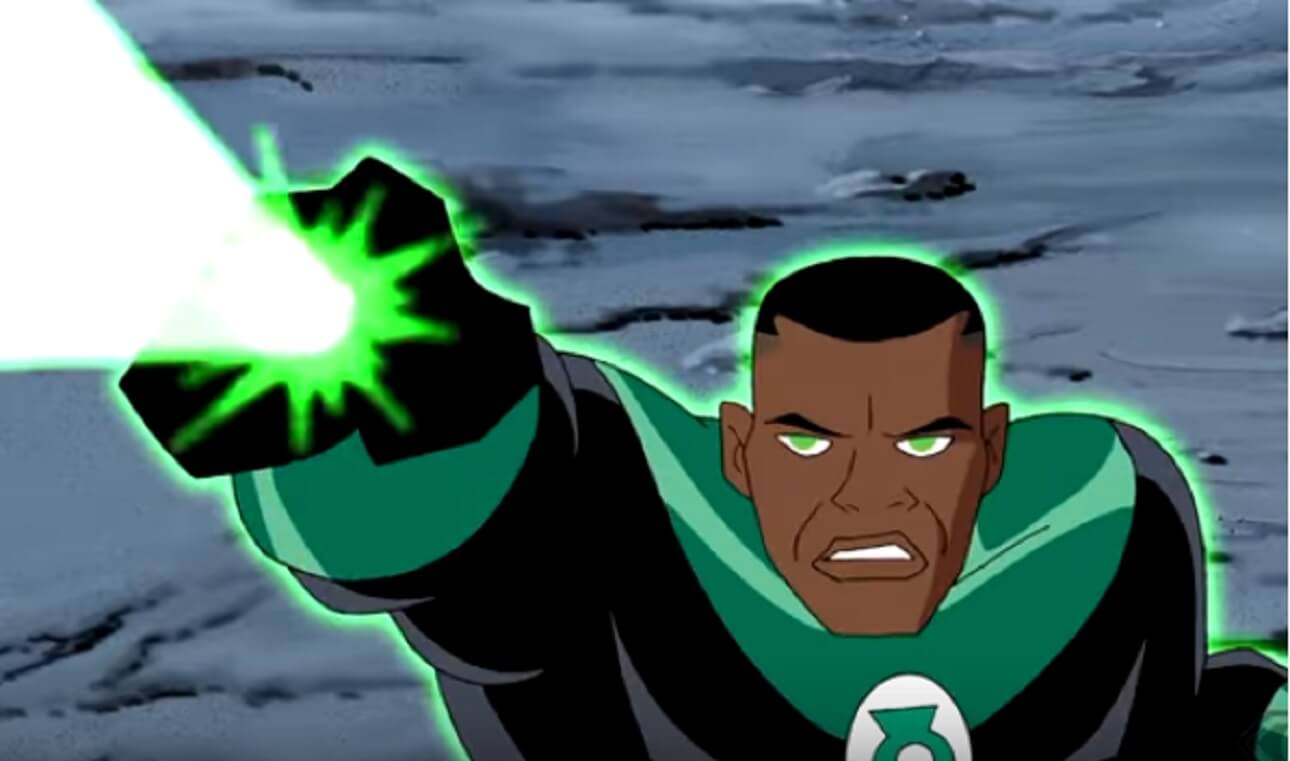 John Stewart was featured prominently in the animated Justice League series and its sequel Justice League Unlimited. The series introduced John to a wider mainstream audience, and added new elements to his backstory, such as his military background, which were later adapted into comics. His “will they or won’t they” relationship with Hawkgirl was a fan-favorite storyline throughout both shows. Phil LaMarr voiced John in both series, as well as John's guest appearance in the Static Shock episode “A League of Their Own”. In the 2017 animated movie Justice League Dark, John Stewart (voiced by Roger Cross) is the featured Green Lantern. John is voiced by Kevin Michael Richardson in the animated Young Justice, in which he also serves as a member of the Justice League.  John has made a few cameo appearances in Teen Titans GO! and was voiced by rapper Lil Yachty in the spinoff movie Teen Titans GO! to the Movies.

When you’re as fearless as John Stewart, the sky is the limit. Who knows what heights he'll soar to next.

Are you a John Stewart fan? Let us know in our Community!