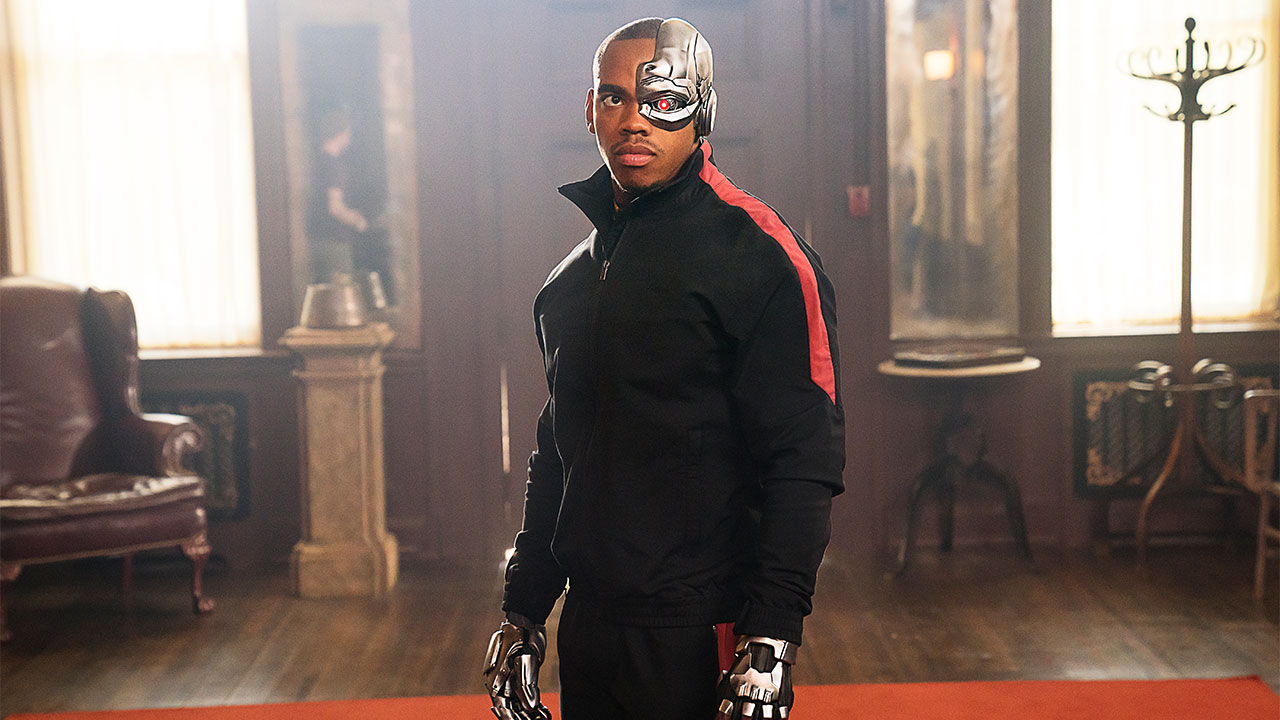 The Evolution of DOOM PATROL's Cyborg

He’s faced all forms of evil, from the firepits of Apokolips to the back alleys of New York City. His friends know him as Victor Stone, but the world he protects knows him as the superhero Cyborg. He originally appeared in writer Marv Wolfman and artist George Perez's The New Teen Titans, and his popularity has grown to the point where he’s currently appearing in three televisions series at once, including the latest DC Universe Original Doom Patrol -- in which he's played by actor Joivan Wade, and first appears in this week's episode, "Donkey Patrol". Yes, Cyborg has had quite a career. Let’s take a look at his journey… 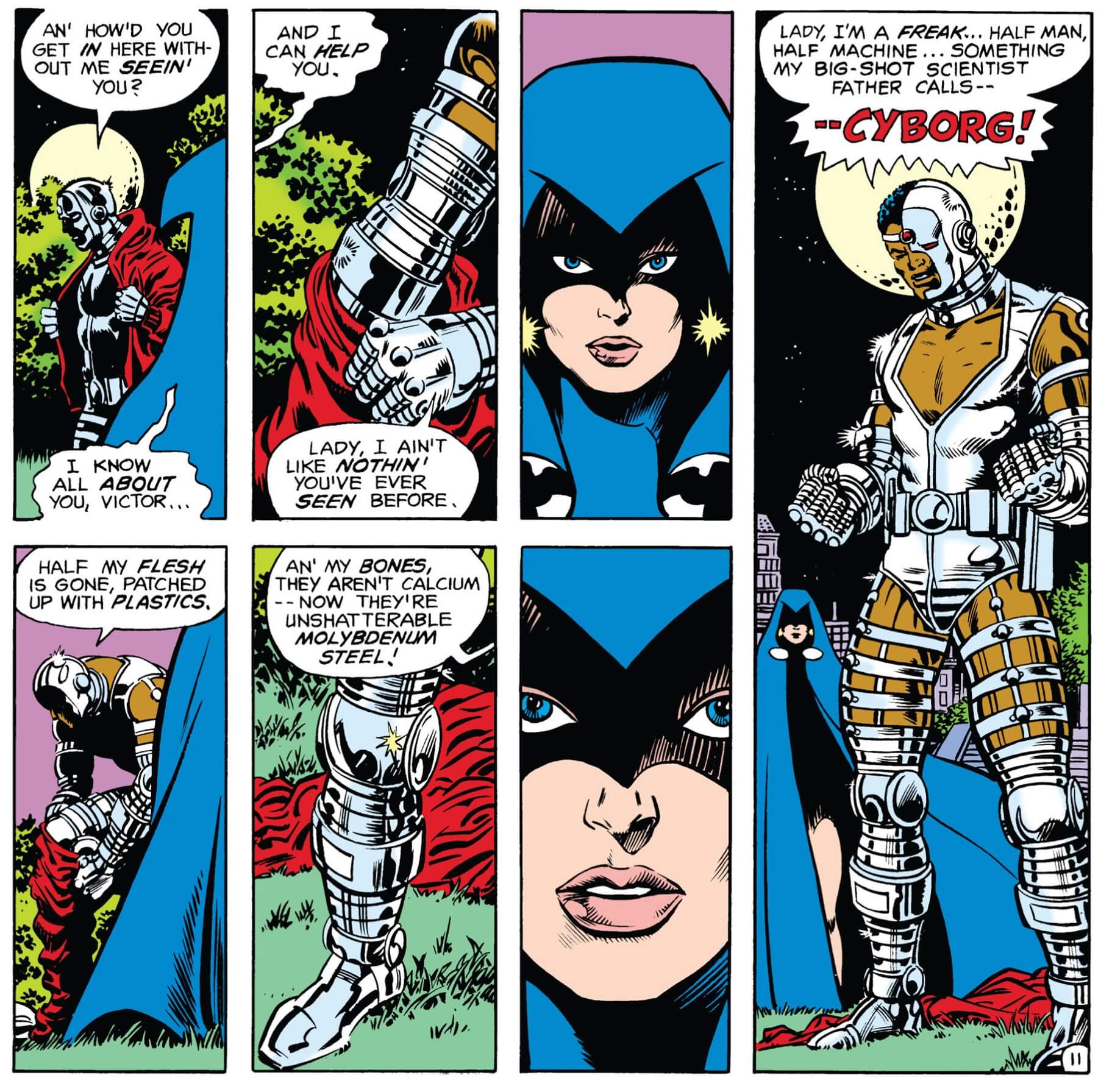 Victor Stone was a high school athlete who dreamed of one day competing in the Olympics. Those dreams were shattered when Vic chose the wrong time to visit his parents at S.T.A.R. Labs. Dr. Silas and Elinore Stone (the former of which also features in this week's episode of Doom Patrol, played by actor Phil Morris) had accidentally let in a creature from another dimension, which critically injured Victor and killed his mother. Silas didn’t want to lose his son too, so he repaired Victor’s body with cybernetic parts, turning his son into a human cyborg (or "cybernetic organism.") 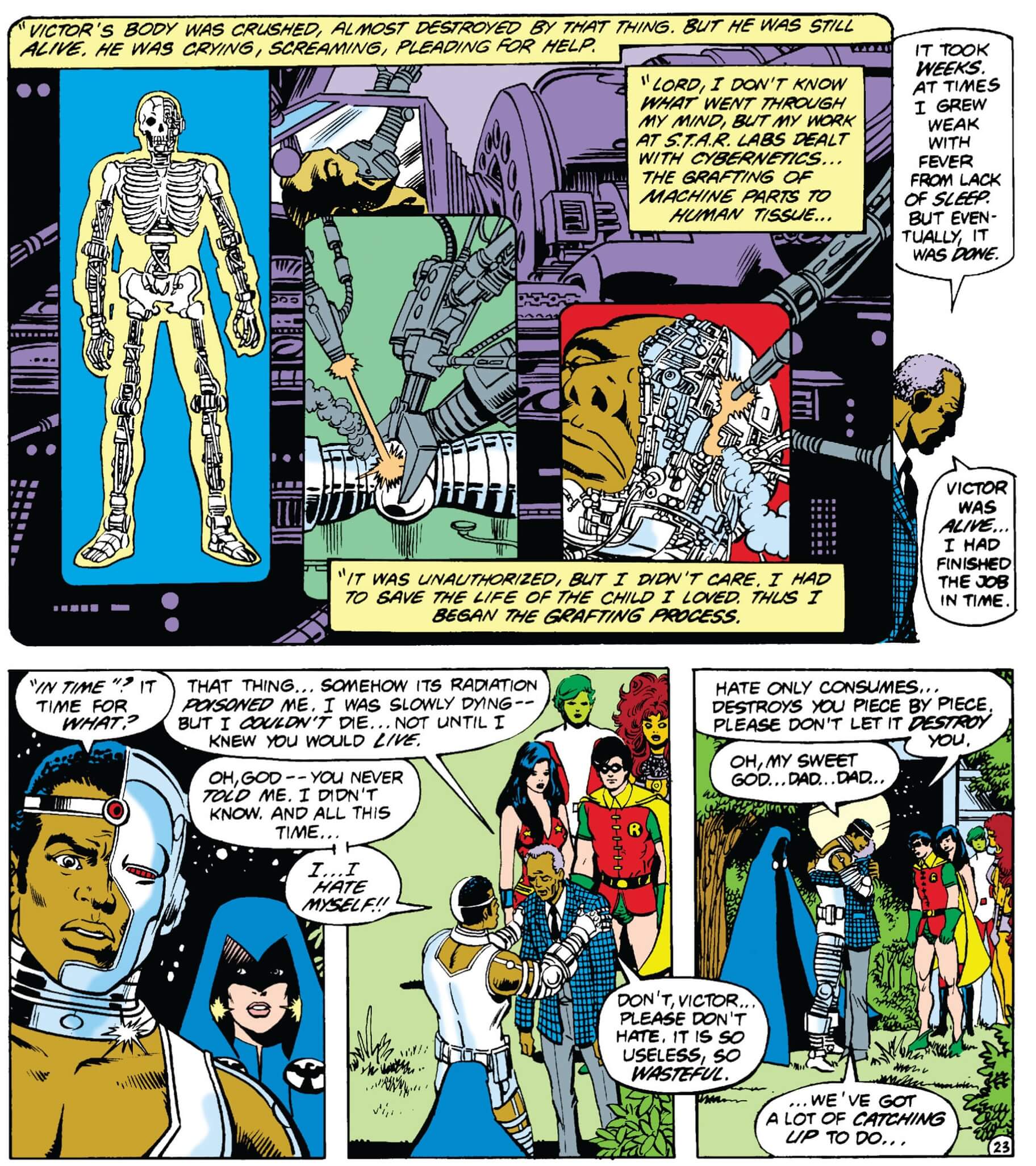 Victor rejected his new body and blamed his father for turning him into a freak. Victor cut off all contact with his father and isolated himself from the world until the New Teen Titans came along. In New Teen Titans #1 (written by Marv Wolfman and penciled by George Perez), Raven convinced the bitter young man to join the team. In the group, Victor found that the cybernetic enhancements he despised were an asset against their foes. His friendship with his teammates helped bring Cyborg out of his shell. Especially his friendship with Changeling, who had previously been teammates with the Doom Patrol's Robotman, another man-machine hybrid.

Silas Stone continued to watch over his son and was pleased to see that the New Teen Titans brought joy to Victor’s life again. Silas anonymously built Titans Tower, the team’s first headquarters, to strengthen his son’s bond with his new friends. In New Teen Titans #7 (written by Marv Wolfman and penciled by George Perez), Silas revealed the accident that killed his wife had given him a lethal dose of radiation, and his time was running out. Victor reconciled with his father and forgave him for turning him into Cyborg. Silas passed away, proud of his son for the hero he had become.

Although fighting crime with the Teen Titans had given him a new purpose, Cyborg still felt adrift as plain old Victor Stone. That changed when he met Sarah Simms, a young woman who worked at a school for children with prosthetics. Victor struck up a friendship with Sarah, and her students loved having him around the school because he showed them that living with prosthetics could be cool. 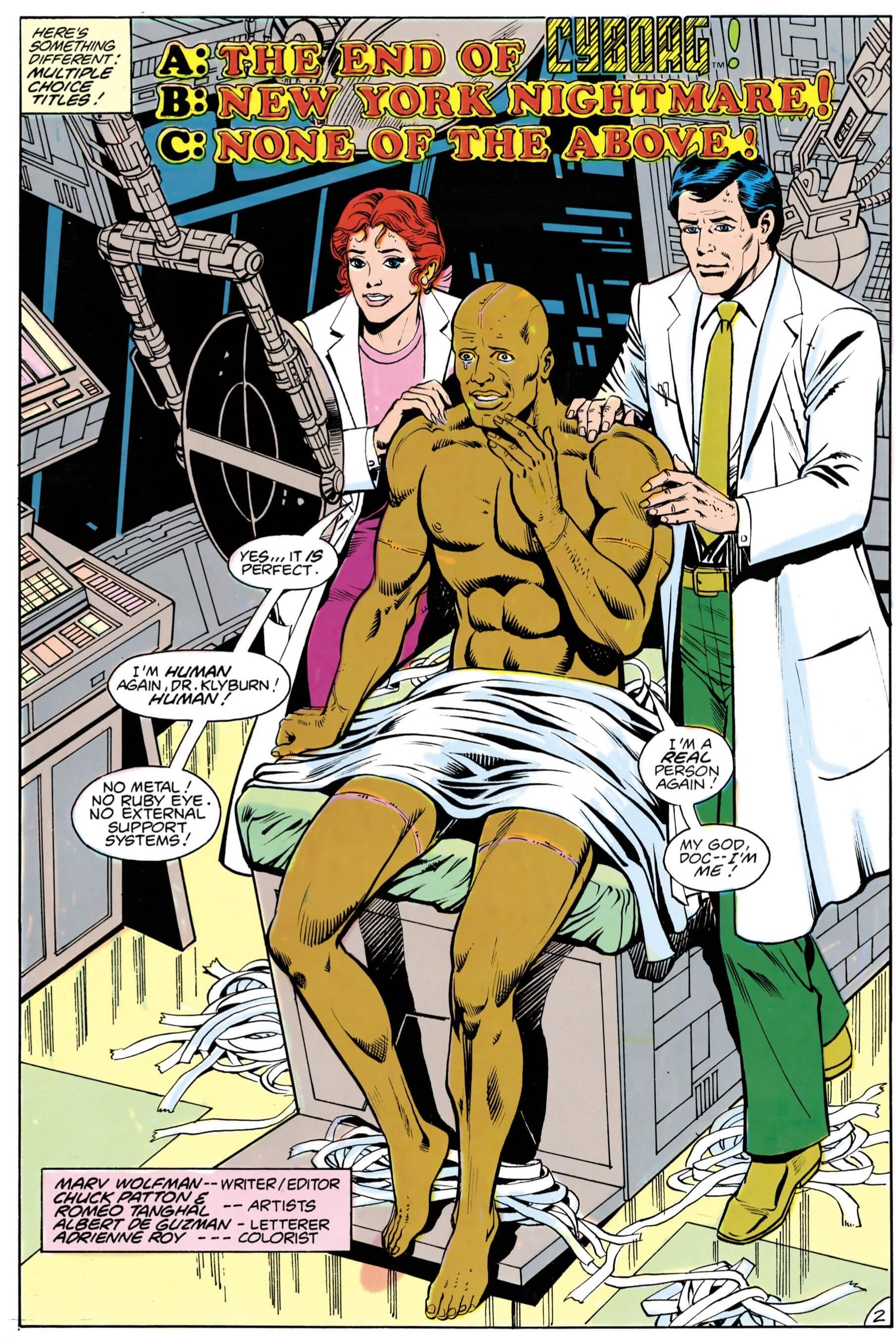 Although Victor had found peace with his new life as Cyborg, he still missed being completely human. In Tales of the Teen Titans #57 (written by Marv Wolfman and penciled by Chuck Patton), Victor underwent an experimental procedure to replace his cybernetic prosthetics with pieces made from artificial skin. Victor was heartbroken when his body rejected the new parts, and he was forced to go back to the cybernetics to survive. On the plus side, he met Dr. Sarah Charles during his recuperation and the two began a relationship. Even when Sarah took a job on the other side of the country, she and Victor made things work with a long distance relationship. 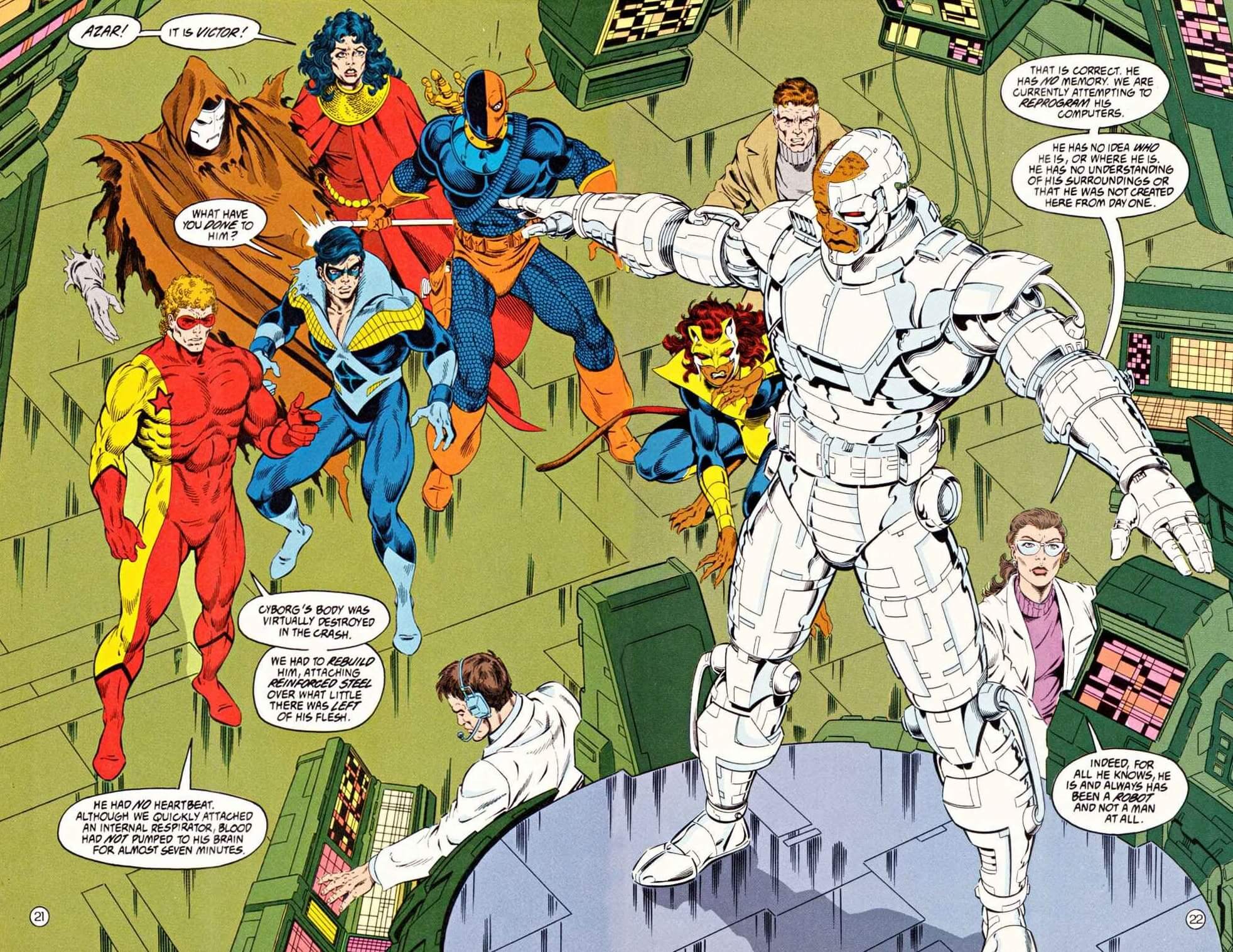 During 1990's "Titans Hunt" storyline, Victor's teammate Jericho -- possessed by the evil spirits of Azarath -- launched a rocket with Cyborg inside. The rocket crashed in Russia and destroyed most of Cyborg’s body. Russian scientists were able to repair and upgrade Cyborg’s body, but he was now more machine than man. Victor Stone couldn’t hear or speak with his friends, but his cybernetic body responded to commands like a mindless drone. 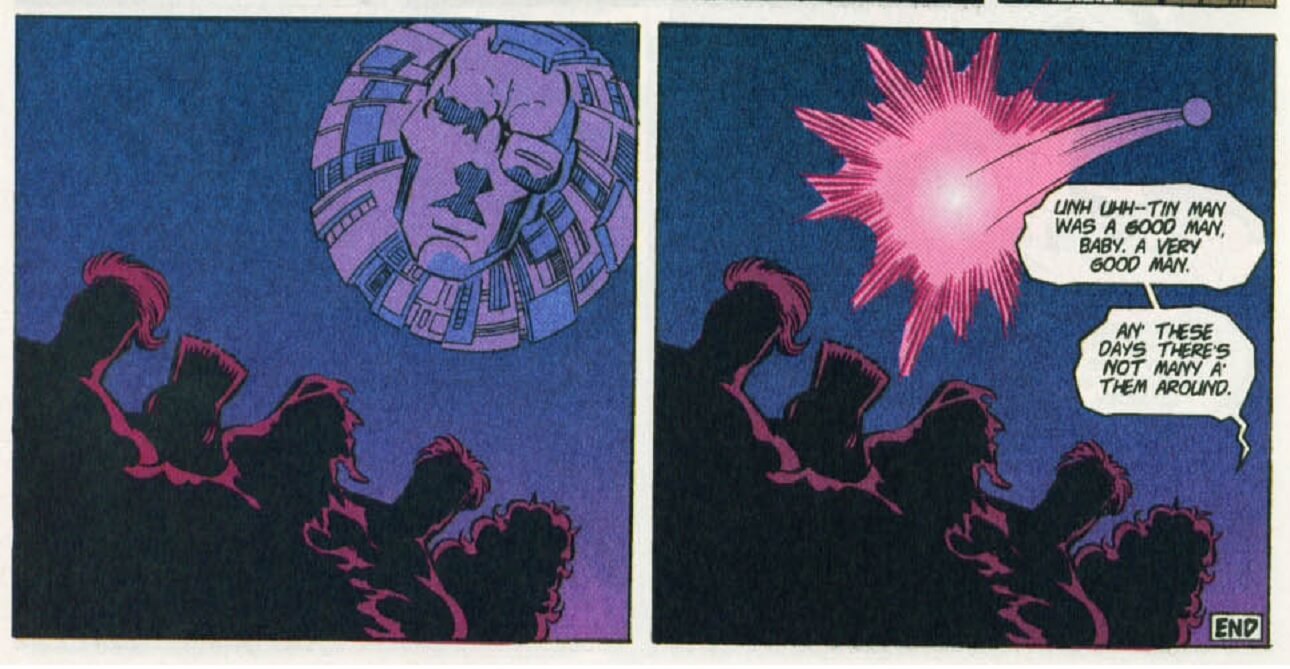 In New Titans #107 (written by Marv Wolfman and penciled by Mark Tenney), Cyborg received his next upgrade, when an alien race of AI named Technis restored Victor’s humanity. Unfortunately, the process had a catch… he was no longer able to survive outside of their reach and couldn’t return to Earth with the Titans. To Sarah’s heartbreak and the Titans despair, Victor allowed himself to fuse with Technis, and left to travel the galaxy with them, teaching the group about humanity. 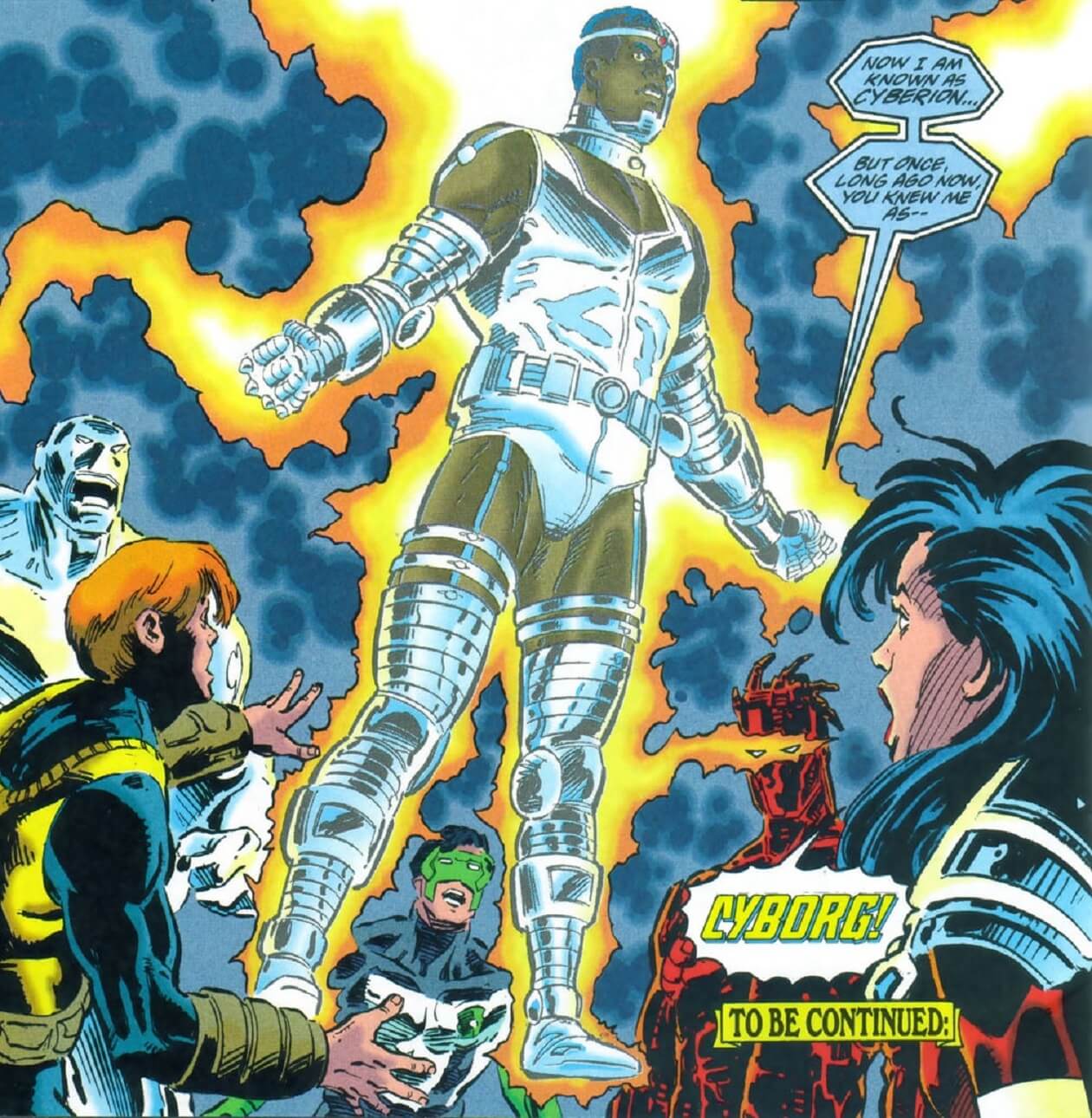 In New Titans #127, Arsenal’s group of Titans were assisted by a strange extraterrestrial named Cyberion. To the group’s surprise, Cyberion turned out to be their former teammate Cyborg in a new body! The Technis race had given Victor the new body as gratitude for teaching them about humanity, and it allowed him to act as their protector in times of war. The Titans enjoyed having Victor around again, but his new form was disturbing and even his close friend Changeling found that Cyberion seemed detached from humanity. 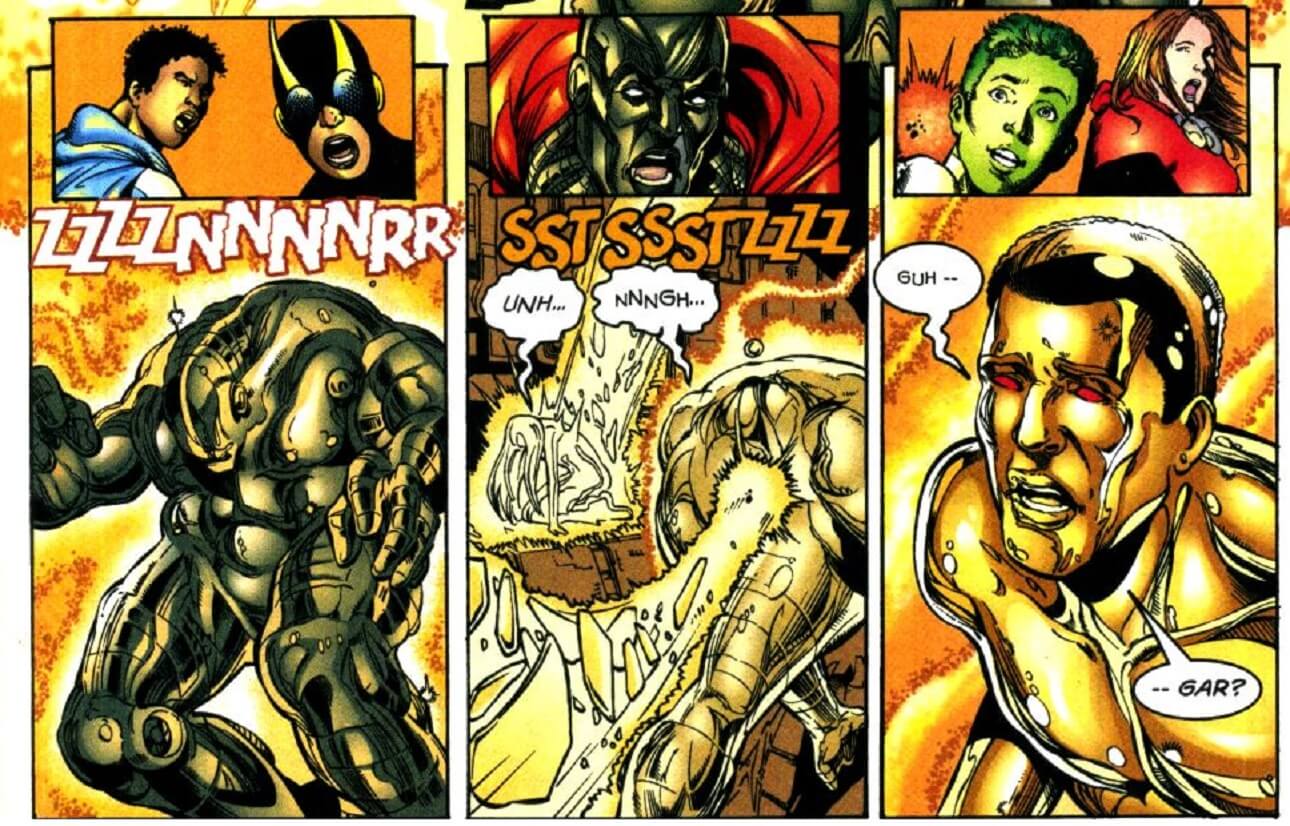 Victor became less human as time went by and found himself trying to reshape the moon into another Technis world. Using technological space debris, Victor began to transform the moon. To recreate a sense of family, he tried to populate it with former Titans. Gar Logan was key in getting through to Victor’s humanity, convincing his friend to reject Technis and release the moon. Victor’s soul was then  downloaded into a golden Omegadrome battlesuit, allowing him to interact with his friends as a new version of Cyborg once more. The Omegadrome had shapeshifting capabilities, and although it was made from gold, Victor felt closer to humanity than when he was connected with the Technis as Cyberion. 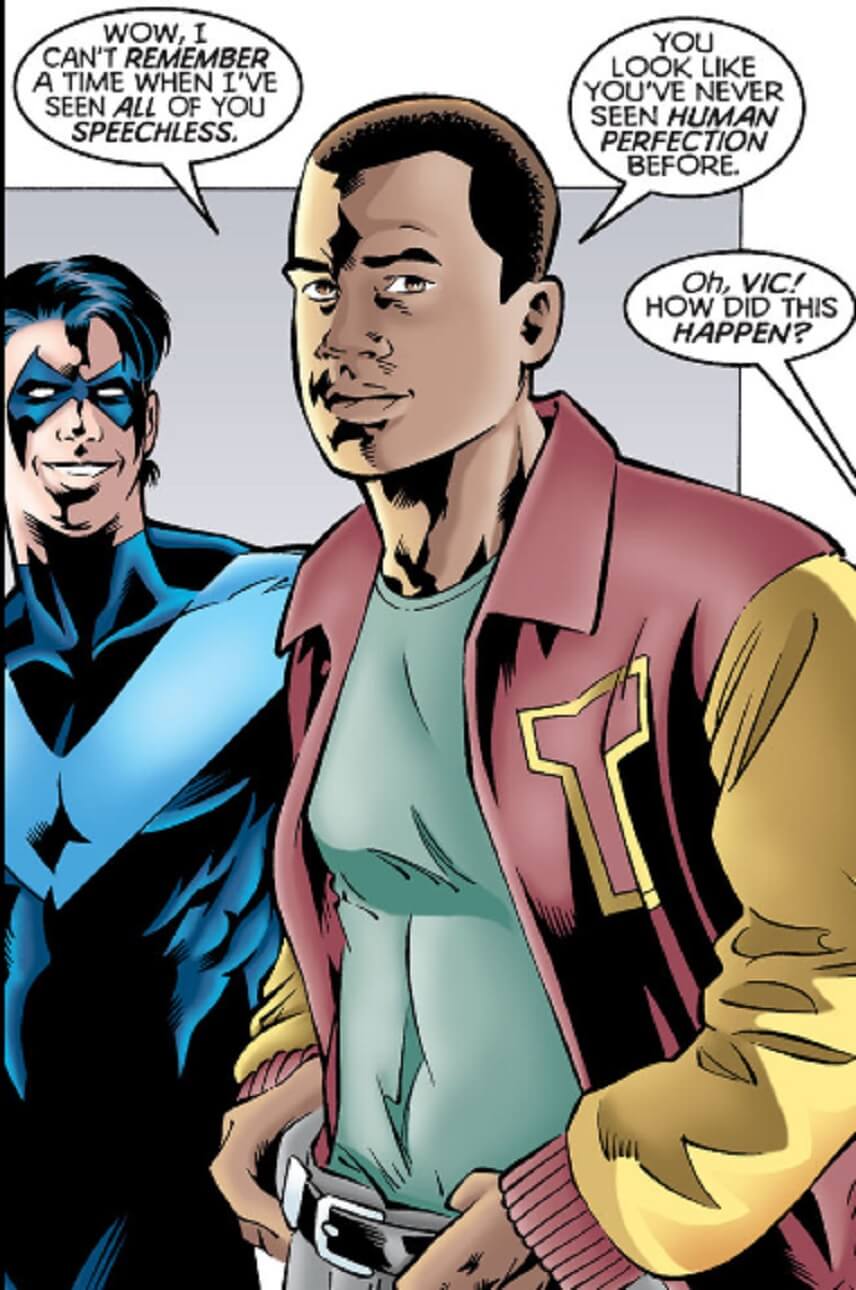 When the Titans reformed, Cyborg became a member once again, little realizing the strings that were being pulled behind his back. It turned out that the Justice League was concerned about Cyborg after he had almost destroyed the moon, and Nightwing promised to keep an eye on him. When Victor learned of this, he felt betrayed, because he thought he had been asked to rejoin the Titans out of friendship, but now he felt like a prisoner. In Titans #20 (written by Devin Grayson and James M. Faerber, penciled by Adam DeKraker) Nightwing tried to mend fences with Victor by presenting him with a cloned version of his original body. Victor underwent a procedure, and his Omegadrome was transferred into the new body. Victor now had all of his shapeshifting powers, but the outward appearance of a normal human. Nightwing “released” Cyborg from his obligation to the Titans, and let Victor roam the world to find himself. 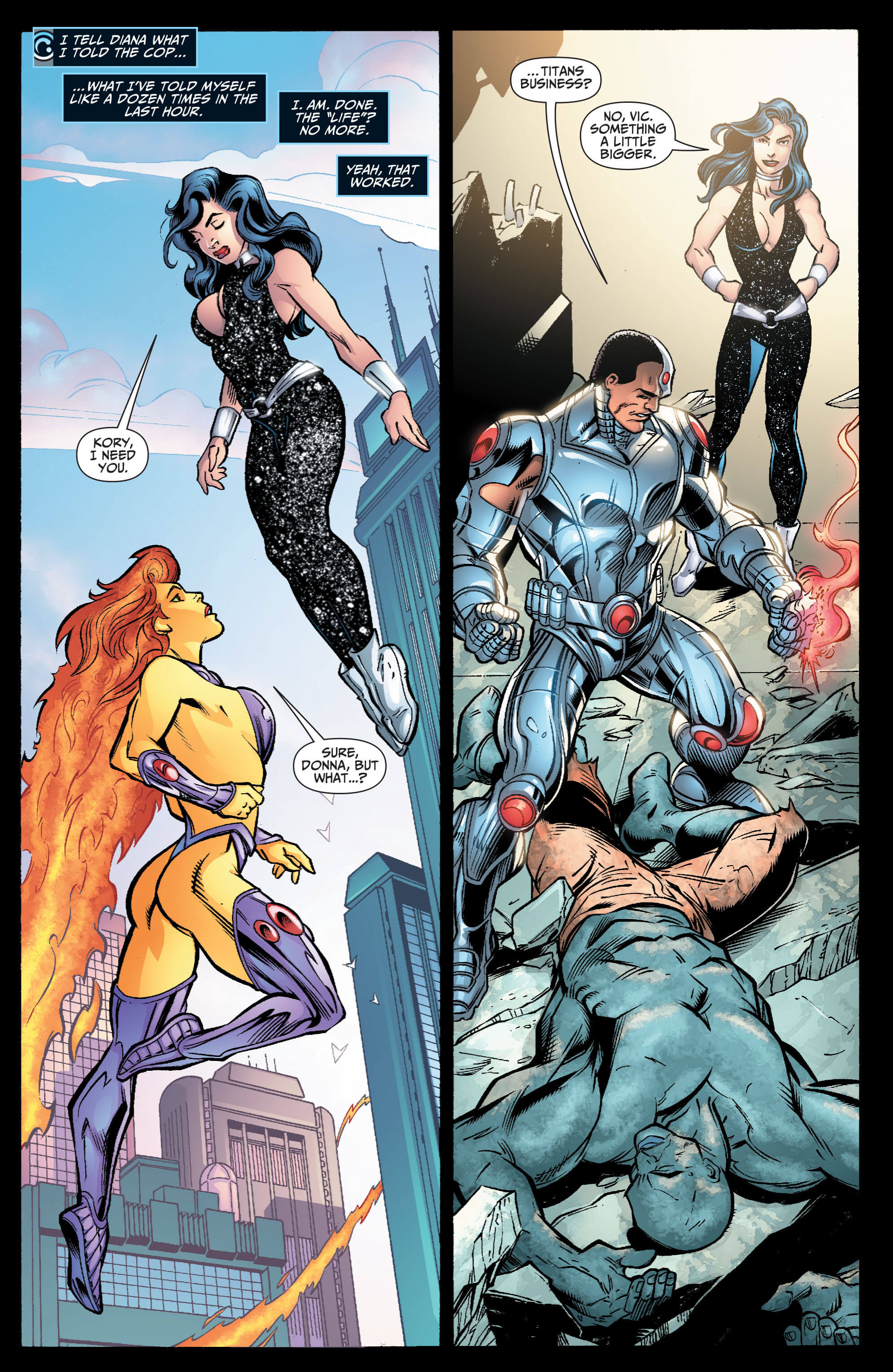 Victor settled in Keystone City, where he worked alongside his former Teen Titans teammate Wally West. After a battle with the Thinker in Flash #188 (written by Geoff Johns and penciled by Scott Koling), Victor lost his shapeshifting abilities and found himself stuck in his traditional Cyborg form. Cyborg then turned his focus on mentoring the next generation of heroes. In 2003's Teen Titans #1 Cyborg, Beast Boy, and Starfire formed a new version of the Teen Titans designed to mentor young super heroes, giving them a place to come into their own.

Once the new group of Titans no longer needed him, it was time for Cyborg to graduate to the next level. In 2010's Justice League of America #41 (written by James Robinson and penciled by Mark Bagley), Cyborg is officially invited to join the Justice League by his former Teen Titans teammate Donna Troy. During his time in the Justice League, Victor befriended Red Tornado, another superhero who was a mix of man and machine. 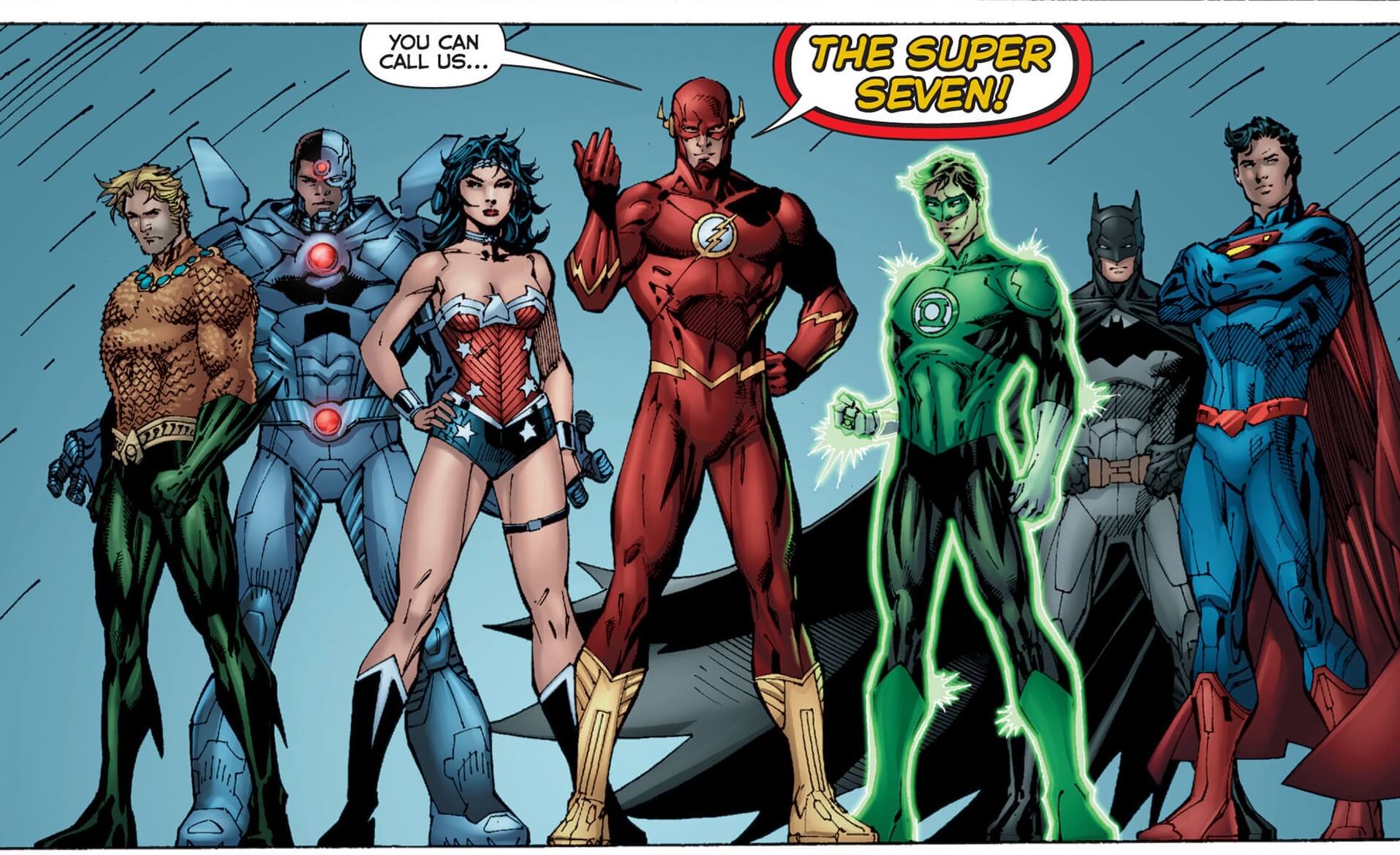 After the reality-altering events of 2011's Flashpoint, Cyborg’s history was altered making him one of Earth’s first superheroes. His origin was retold in the first arc of 2011's Justice League series, in which it was revealed that Silas had used Apokolips tech to rebuild his shattered son’s body. Cyborg’s body now contains a Father Box, giving him the ability to teleport himself and his teammates. The New 52 raised Cyborg’s profile, making him a founding member of the Justice League. His increased popularity carried over into the Rebirth era, in which he was given his own solo Cyborg series. 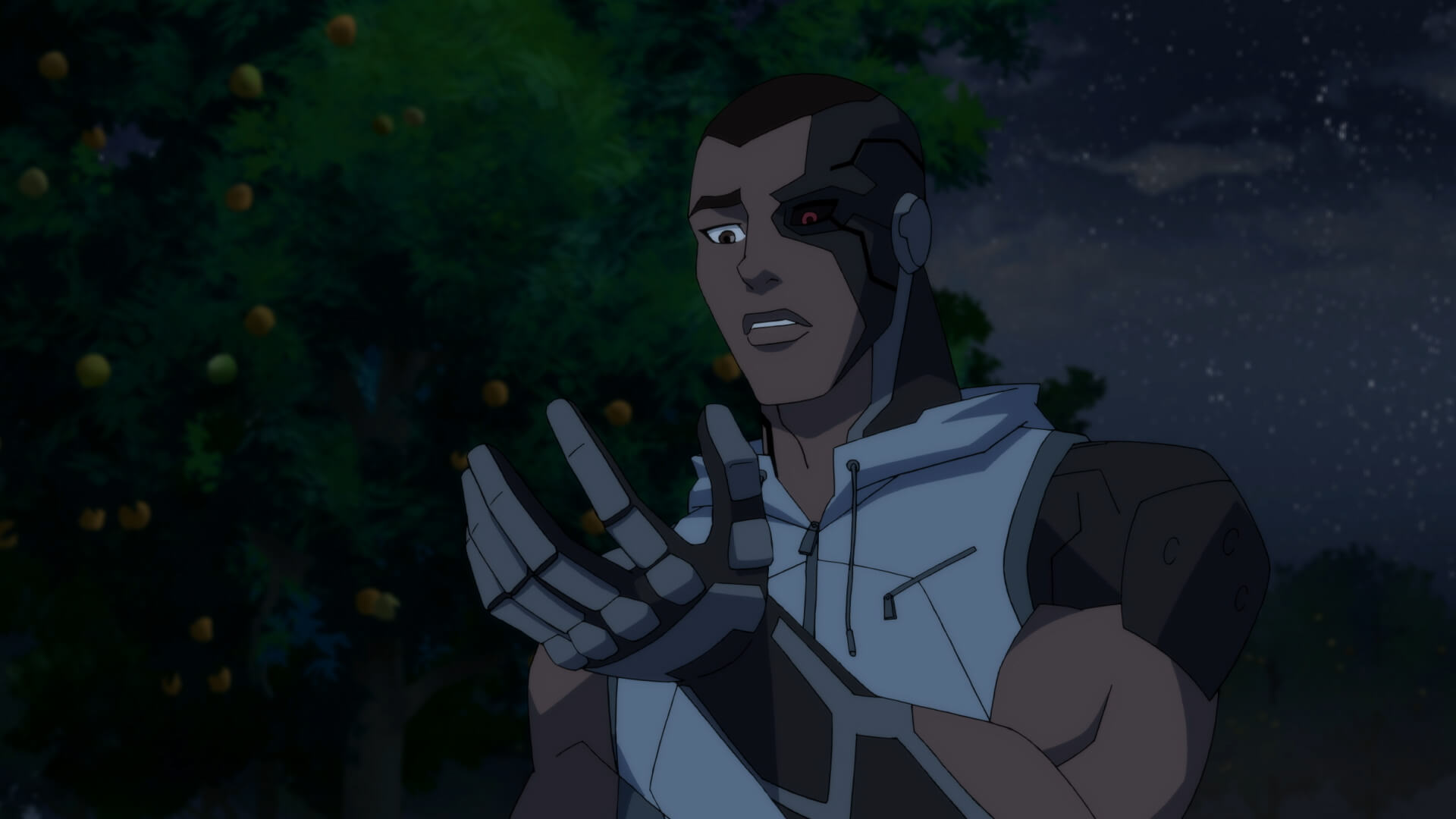 Cyborg’s first screen appearance was in the Super Friends Galactic Guardians episode “Seeds of Doom”. Cyborg became a regular character in the final season of Super Friends, in which many young DC fans were introduced to him for the first time.

In 2003, Khary Payton began voicing a more fun-loving version of Cyborg on the Teen Titans cartoon. Khary’s version of Cyborg introduced the character's iconic catchphrase “Booya," which has carried over into subsequent interpretations of the Cyborg. Khary’s take on Victor Stone became so iconic, that he was invited to reprise it for the DC Nation shorts New Teen Titans, DC Super Hero Girls, and Justice League Action.

In 2006, Cyborg was seen in live-action for the first time when Lee Thompson Young portrayed him in the TV series Smallville. Ray Fisher brought Cyborg to the big screen for the first time in a cameo in 2016's Batman v Superman: Dawn of Justice, before returning for a lead role in 2017’s Justice League film.

Currently, Victor Stone can be seen in three different television shows! Khary Payton reprises his role as Cyborg in Teen Titans Go! which recently enjoyed a theatrical spin-off, Teen Titans Go! To the Movies. Zeno Robinson voices Cyborg in DC Universe's Young Justice: Outsiders, which follows Victor’s origin as he copes with his new cybernetic parts. Joivan Wade plays Cyborg in DC Universe's Doom Patrol. How will Cyborg eventually fit in with the titular team? One thing's for sure, Cyborg has been an asset to every team he’s been on, so it's likely the show will feature enough high-tech, hardware-driven adventure and humanistic drama to satisfy all of Cyborg's fan!

Are you a fan of Cyborg? Let us know in our Community!