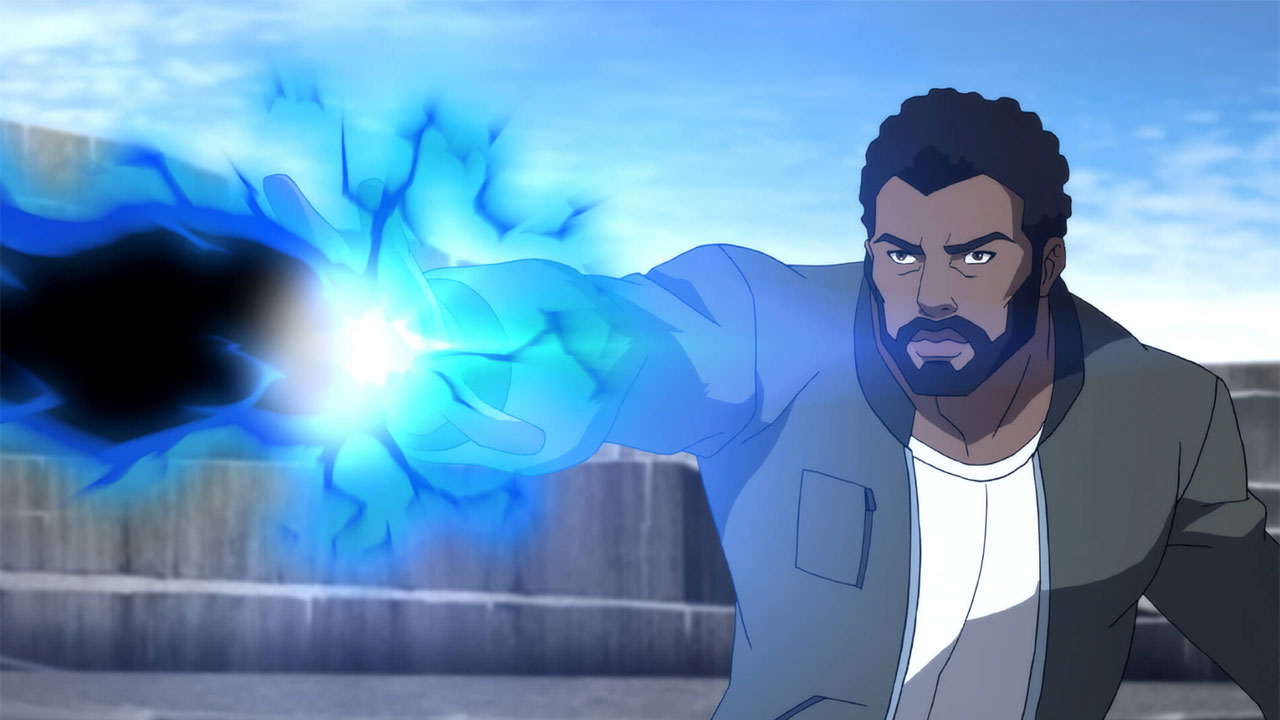 The Evolution of Black Lightning

He’s served with Batman. He’s worked in a U.S. Presidential administration. He’s currently starring in two different DC Comics television shows. And he’s broken plenty of barriers for African-American superheroes. Rising up from nothing, until he became one of the mightiest heroes in the DC Universe, Jefferson Pierce has been an inspiration in costume and out for over forty years, as the first African-American DC Super Hero to headline his own comic book. He's currently electrifying audiences on TV’s Black Lightning live-action series, and on Young Justice: Outsiders. But where did Black Lightning come from and how did he get where he is today? Let’s take a look… 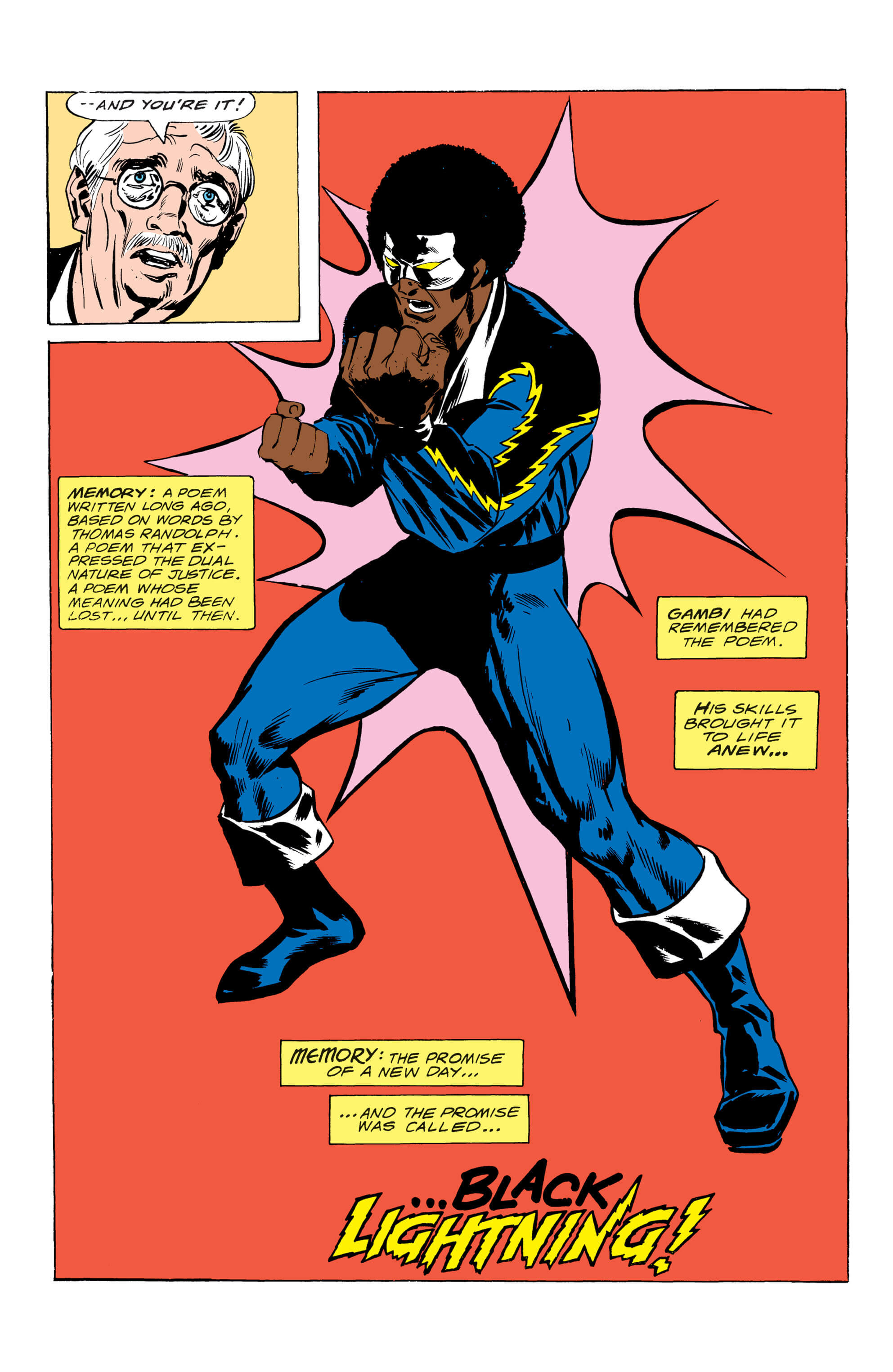 Jefferson Pierce first appeared in 1977's Black Lightning #1 (written by Tony Isabella and penciled by Trevor Von Eeden), as an adult returning to his childhood neighborhood of Suicide Slum, seeking to make it a better place. Jefferson had grown up hoping to leave his old community behind and had become an Olympic athlete and model student. Realizing his home hadn’t gotten any better, Jefferson returned to become a teacher. When a gang called The 100, led by the evil Tobias Whale, started terrorizing Suicide Slum, Jefferson took matters into his own hands.

Jefferson’s friend and mentor Peter Gambi built him a super-suit, complete with an electrical power belt. The belt gave the suit a force field that could manipulate energy to create energy blasts. Donning the suit and a mask, Black Lightning was born! Black Lightning became the protector of Suicide Slum and Garfield High, the school where Jefferson taught. Although he attempted to hide his identity, Lynn Stewart, a fellow teacher who happened to be Jeff’s ex-wife, saw through the disguise immediately.

During Black Lightning’s war with The 100, Peter was killed in the crossfire, leaving Jefferson devastated. But he was eventually able to take down Tobias Whale and drive The 100 out of Suicide Slum. Although Gambi’s power belt was the original source of Jefferson’s powers, he soon found that his body had abosorbed its power, and he could produce electricity on his own! 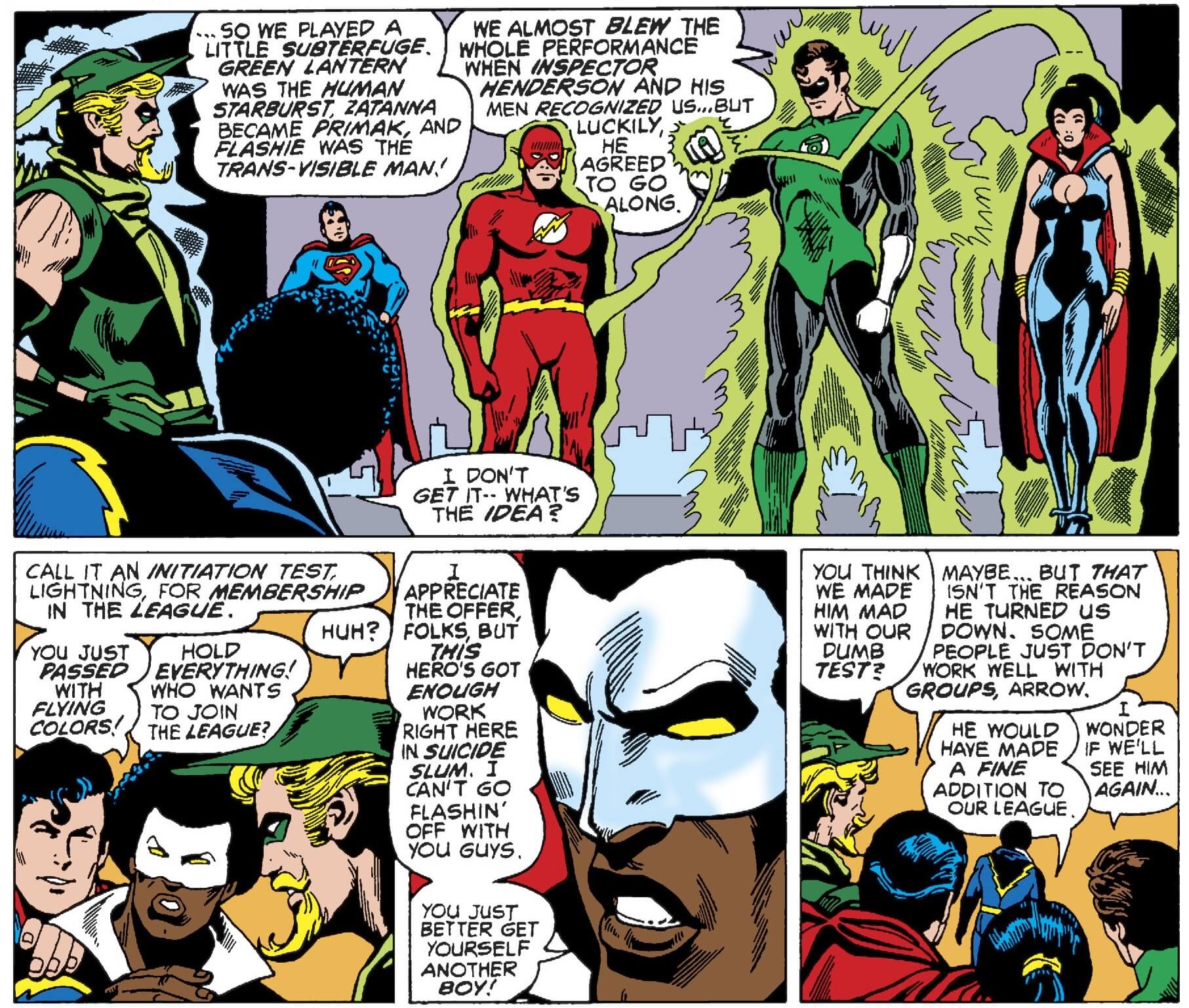 In DC Comics Presents #16 (written by Denny O’Neil and penciled by Joe Staton), an innocent girl named Trina Shelton was struck by a stray bullet while Black Lightning was fighting a mugger. Jefferson felt responsible for her death, and tried to push his feelings of guilt aside to continue patrolling the streets. By 1979's Justice League of America #173 (written by Gerry Conway and penciled by Dick Dillin), Black Lightning’s activities were known well enough for Green Arrow to nominate him for Justice League membership. To the League’s surprise, Jefferson turned them down, saying he had too many responsibilities in Suicide Slum.

In Detective Comics #491 (written by Martin Pasko and penciled by Pat Broderick), an encounter with a sprinkler system short-circuited Jefferson’s suit, and he found his powers were gone. The loss of his powers coupled with his guilt over failing to save Trina Shelton, soon prompted Jefferson to hang up the Black Lightning costume. 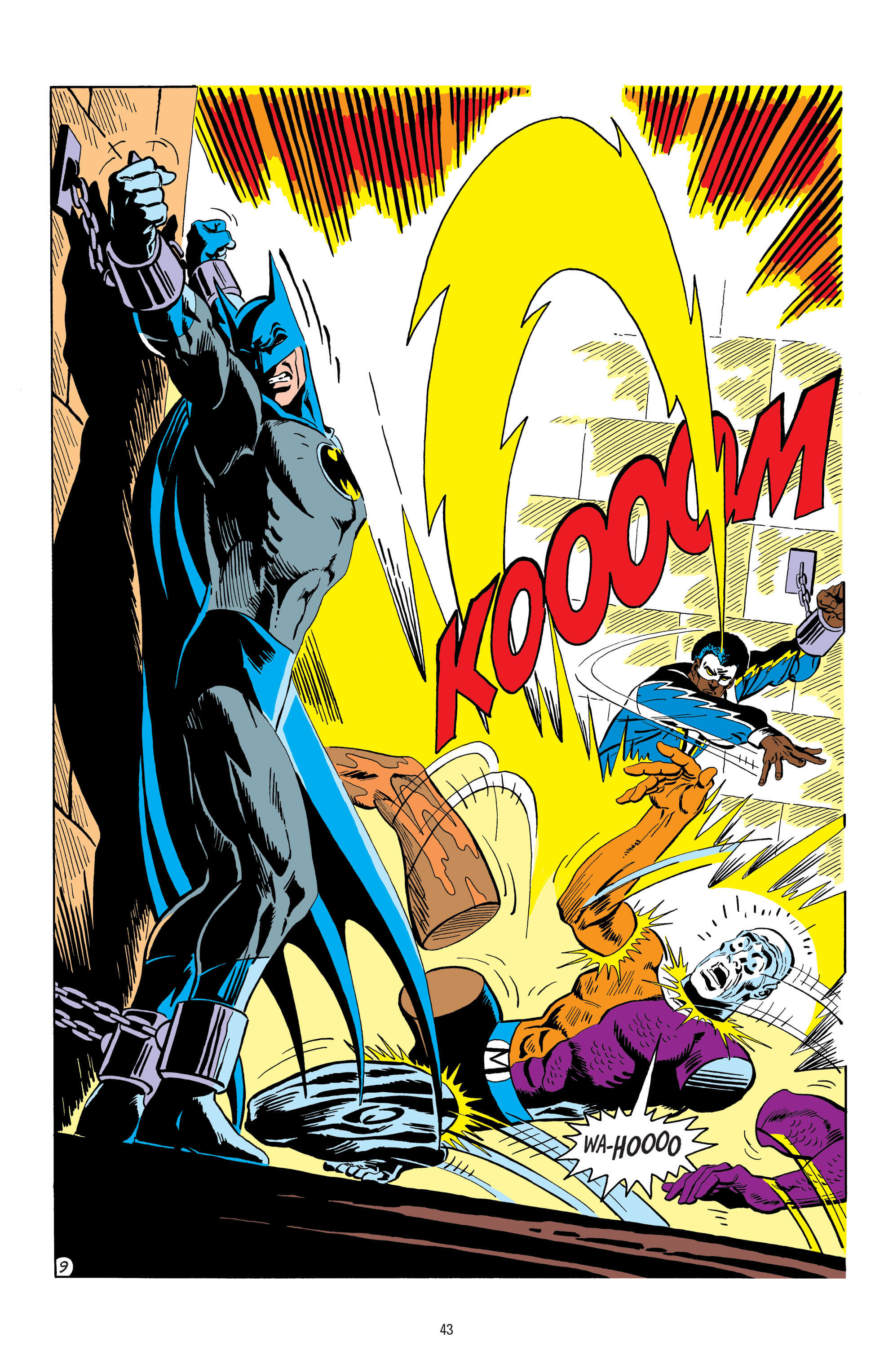 A few years later, Batman brought the reluctant Jefferson out of retirement for an international rescue mission. In 1983's Batman and the Outsiders #1 (written by Mike W. Barr and penciled by Jim Aparo), the Dark Knight and Black Lightning journeyed to the country of Markovia to save Bruce Wayne’s captive friend Lucius Fox. During this mission, Jefferson told Batman about his guilt over Trina’s death and the loss of his powers. Batman deduced that Jefferson’s power loss was a psychological block, brought on by his guilty feelings. The Dark Knight coached Jefferson through his troubles, and Black Lightning’s powers returned.

While in Markovia, Batman and Black Lightning ran into Halo, Katanna, Metamorpho, and Geo-Force. The five of them worked together to save Lucius Fox and free Markovia from its evil dictator. The group decided to stay together, and became known as the Outsiders. Batman led the group for years, until disagreements saw the team cut ties with the Dark Knight. Relocating with his team to Los Angeles, Jefferson reconnected with his ex-wife Lynn. 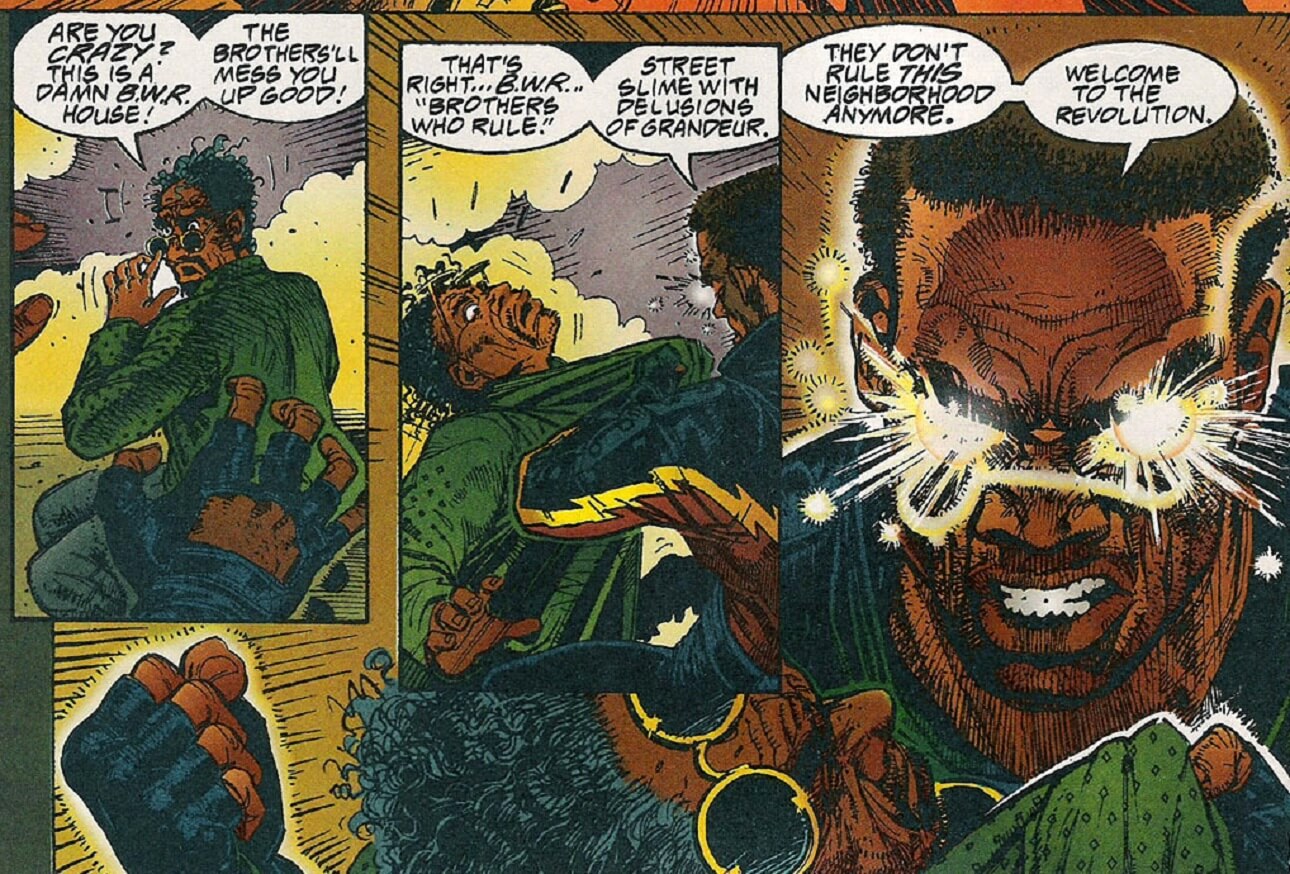 After a disastrous battle with the alien Manhunters left some of the team wounded and depowered, the Outsiders went their separate ways. Seeking a new way to make a difference, Black Lightning and Batman came up with a new arrangement. Bruce Wayne would award financial grants to schools in needy areas, and Jefferson would teach there. This allowed Jefferson to stop youth corruption from the ground up and return to his first love: education.

During the 1988 limited series Invasion!, a Gene-Bomb went off, causing all superpowered heroes to lose control of their abilities. Jefferson’s lightning powers went crazy. For a brief period, he relocated to Brick City, where he sought to reinvent himself. He found a job at the town's high school (thanks to some money from Bruce Wayne), and had another failed reconciliation attempt with Lynn. 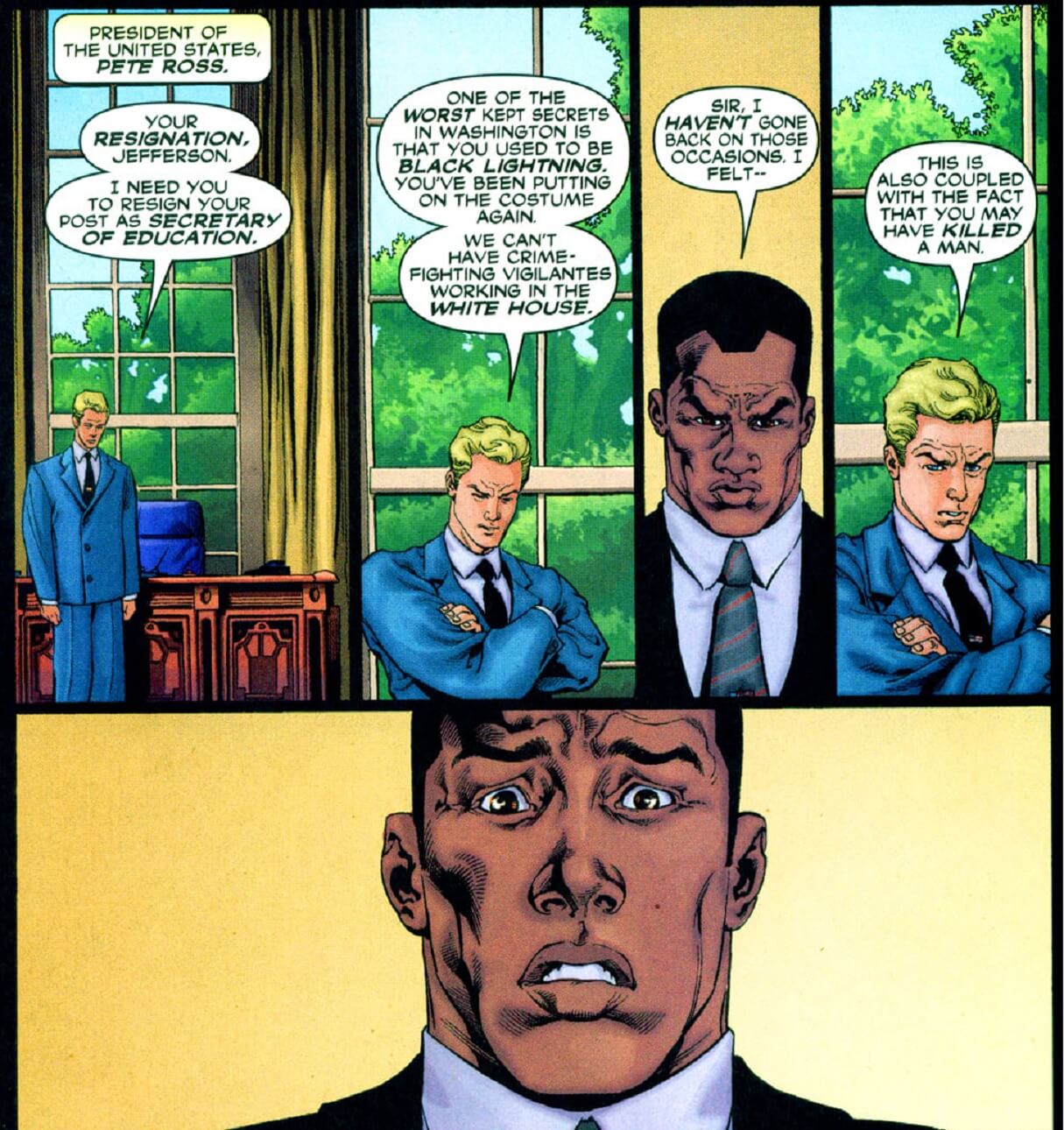 When Lex Luthor was elected President of the United States, he nominated Jefferson to serve as his Secretary of Education. To the surprise of his friends in the superhero community, Jefferson accepted! While he didn’t trust Luthor, Jefferson knew he could best keep an eye on the administration from within, and saw his new position as a unique opportunity to reshape America’s education system.

In 2003's Outsiders #1 (written by Judd Winnick and penciled by Tom Raney), readers are introduced to Jefferson and Lynn’s grown daughter Anissa, who joins a new group of Outsiders under the name Thunder. As a young girl, Anissa learned she could shift her density and create shockwaves. Jefferson did not want his daughter to suffer all the trauma he had, so he attempted to talk her out of the hero life, but to no avail. Black Lightning eventually grew to accept Thunder’s place in the superhero community, but he still raised objections at every available opportunity.

After Lex Luthor was removed from office, Jefferson hoped to stay on for President Pete Ross’ administration. Unfortunately, Jefferson's secret identity had been revealed. Rather than risk a conflict of interest, President Ross called on Jefferson Pierce to step down, which he did out of duty. 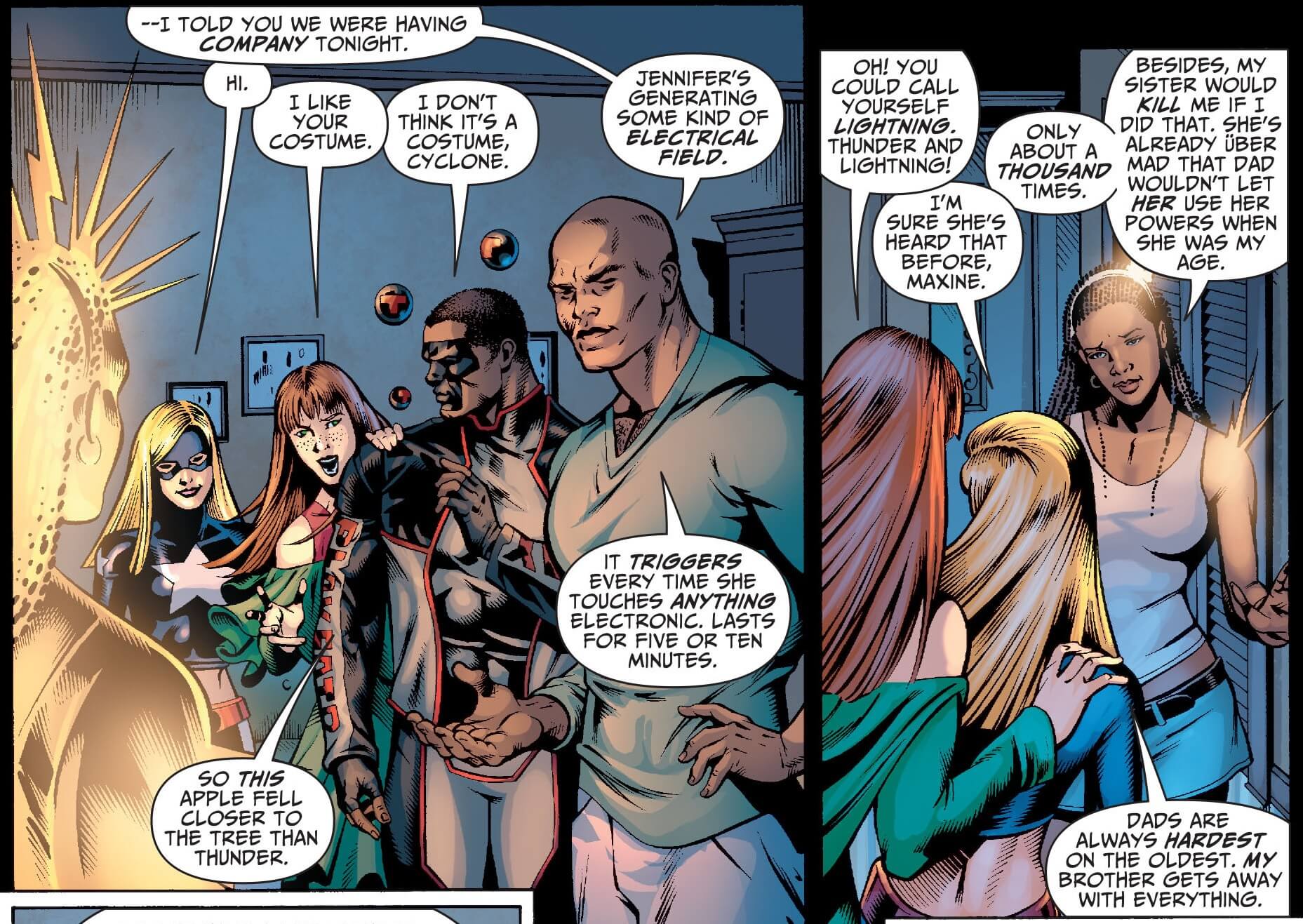 Readers met Jefferson and Lynn’s youngest daughter Jennifer in 2006's Justice Society of America #12 (written by Geoff Johns and Alex Ross, penciled by Dale Eaglesham). Jennifer could generate an electrical field, which caused her parents to worry she’d follow the same path her sister Anissa had. Jefferson and Lynn reluctantly put her in the hands of the Justice Society of America, hoping they’d serve as a better influence on her than the Outsiders. Jennifer quickly bonded with her new teammates and took on the code name Lightning.

Recently, Black Lightning has reappeared in the pages of Detective Comics, where Batman tasked him with training a black ops squad consisting of the next generation of heroes. 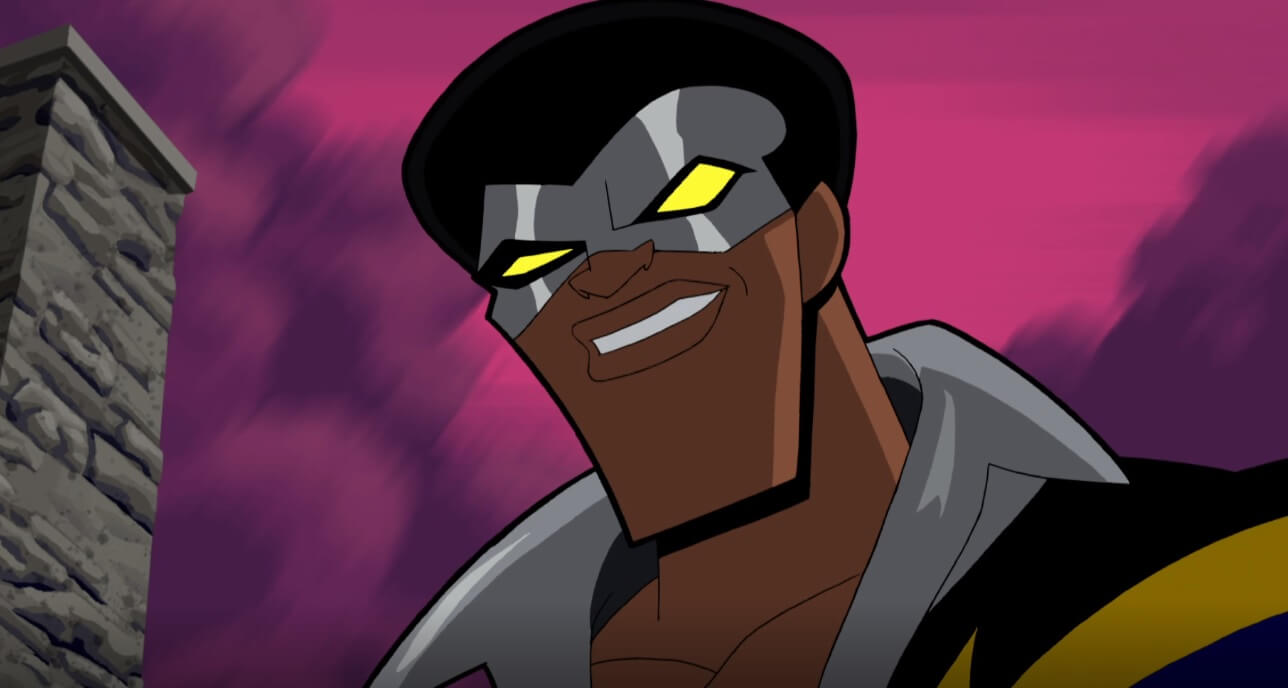 Jefferson, along with his daughters Anissa and Jennifer, starred in the DC Nation Short "Thunder and Lightning". Black Lightning, along with the original Outsiders lineup, has also appeared in animated form in the Batman: The Brave and the Bold episode “Requiem for a Scarlet Speedster”. Jefferson Pierce now stars in a show of his own, TV’s Black Lightning, in which he’s played by Cress Williams. The live-action drama, which premiered in 2018 and has just been renewed for its third season, also features Jennifer and Anissa, as they struggle to cope with their developing super powers. Black Lightning can also be seen right here on DC Univere in Young Justice: Outsiders, in which he and Nightwing coach a new group of young heroes.

Are you a Black Lightning fan? Let us know in our Community!