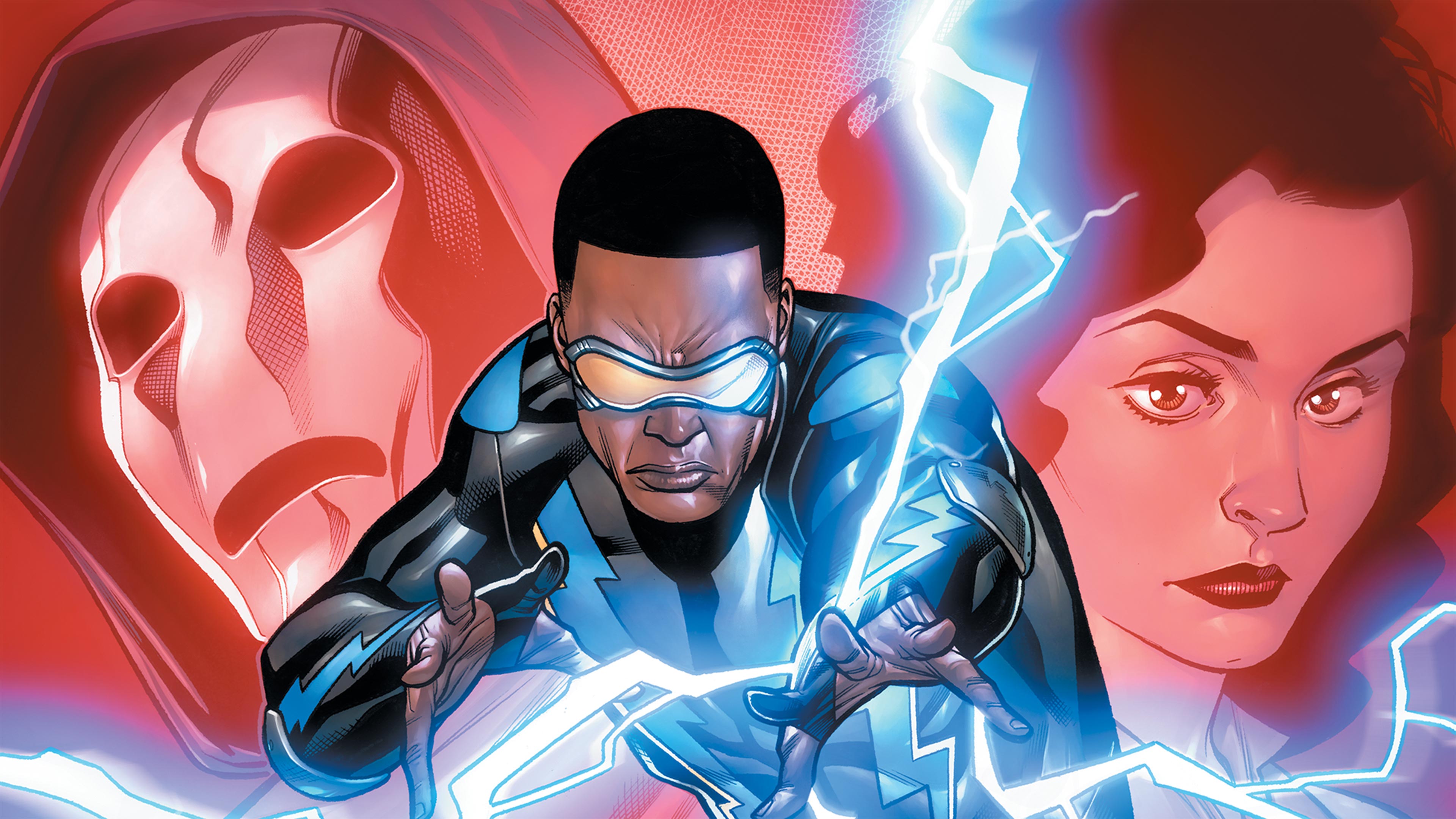 Lightning strikes way more than twice in the DC Universe. A lightning boly symbol can be found on everyone from the Flash to Shazam. Many of these characters have rewired the cannon and sparked new stories throughout history. Let’s take a look at the most electric characters that put the DC in DC Universe. 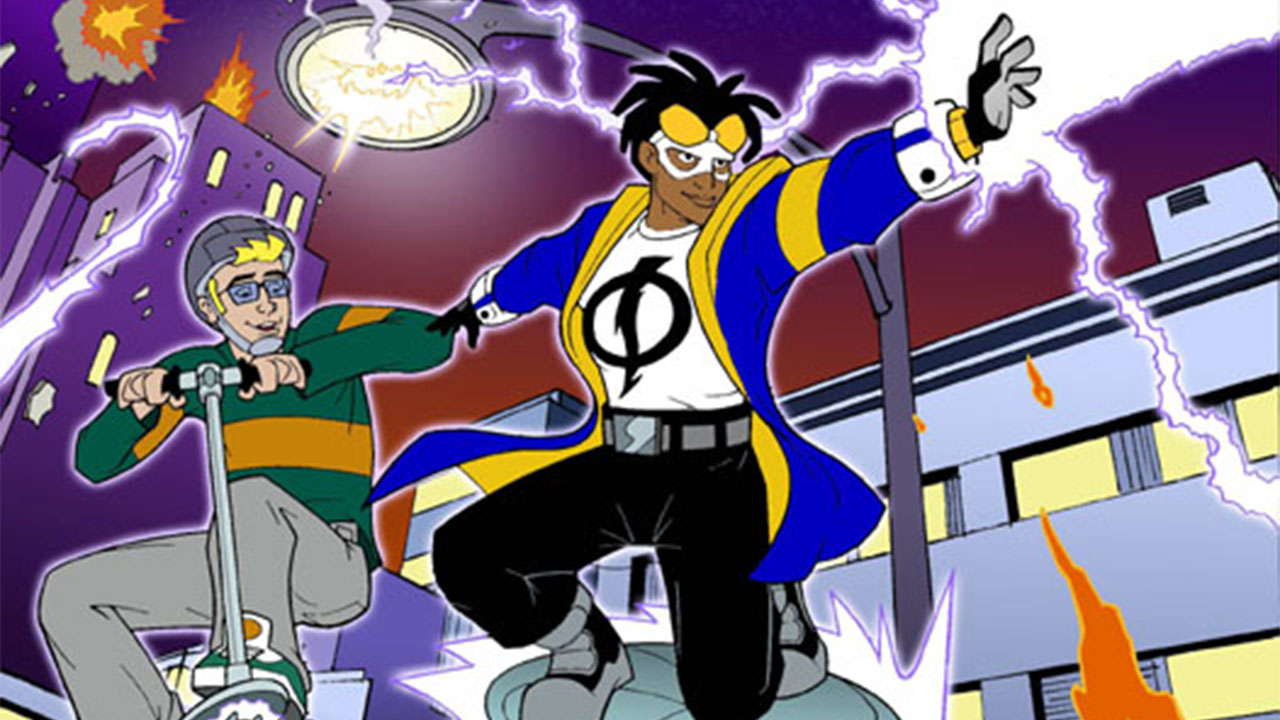 Virgil Hawkins gained his powers when he was caught in the crossfire of a gang war and exposed to a radioactive tear gas. Most of the people exposed to this died, but 15 year old Virgil gained electrokinesis. This spark lead him to take up the mantle of Static. He mostly worked on his own, fighting other “bang babies” created during that fateful night. Later, Static was invited to be a full-time member of the Teen Titans. Many were first introduced to him in his DCAU series Static Shock. The series was a big hit and lead to crossovers with the Justice League and Batman Beyond. Currently, he can be seen on Young Justice: Outsiders. 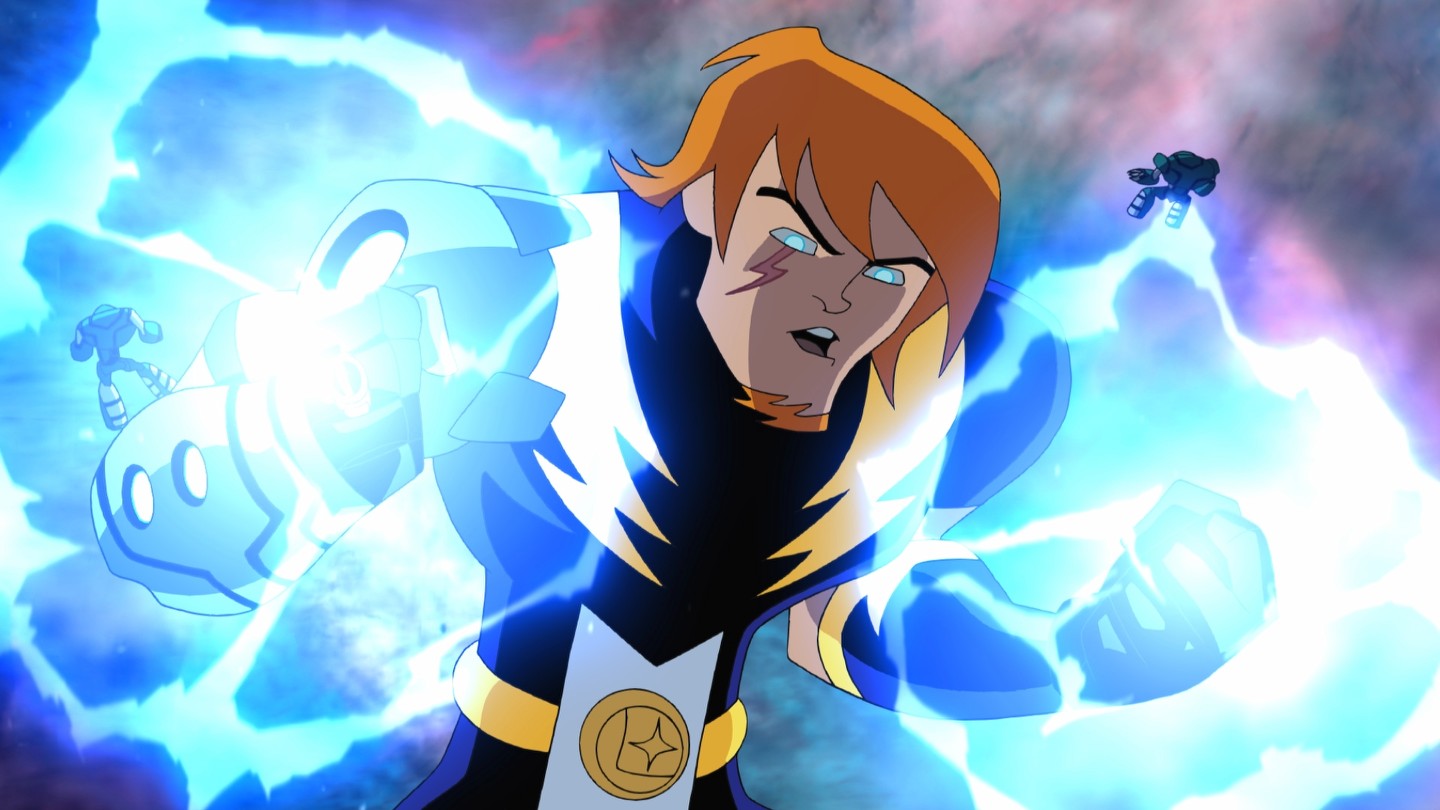 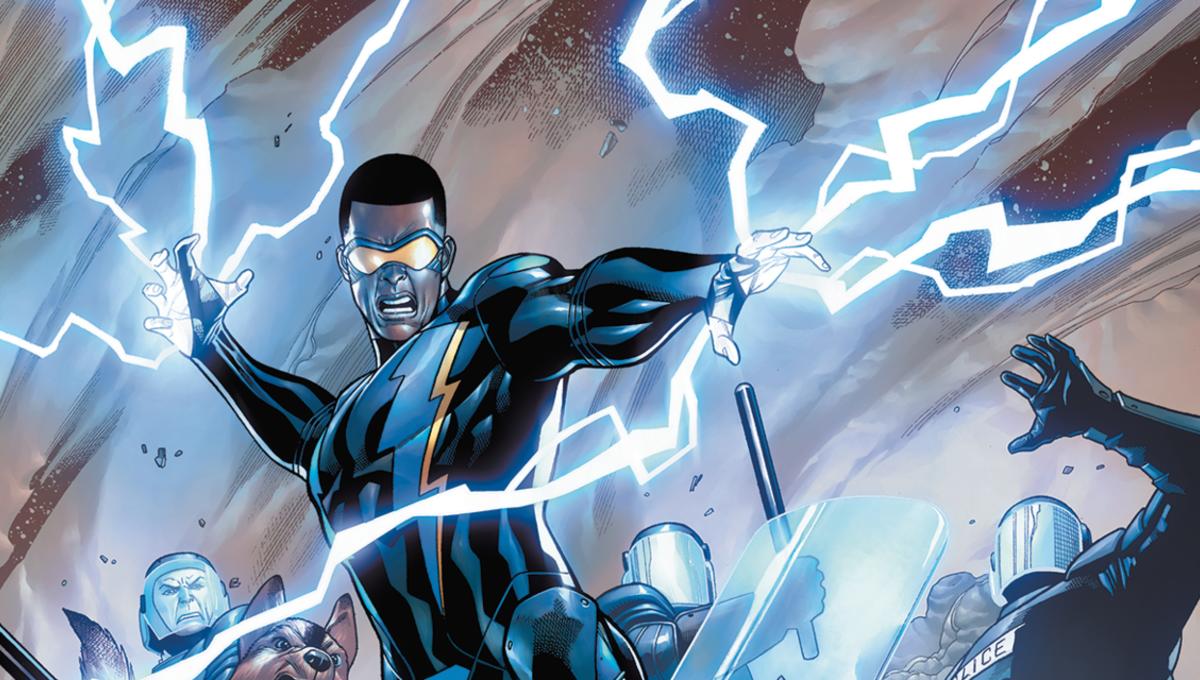 Originally Jefferson Pierce used a belt to harness his powers, but in recent years he has been retconned into a metahuman. He made a name for himself and Batman took notice. The two have teamed up several times. Black Lighting to join The Outsiders and was the Secretary of Education under President Luthor. He was supposed to be a member of the Super Friends, but due to a legal dispute he was replaced with the totally different Black Vulcan… He eventually made it to the small screen with his own successful TV series and as a major addition to Young Justice: Outsiders. 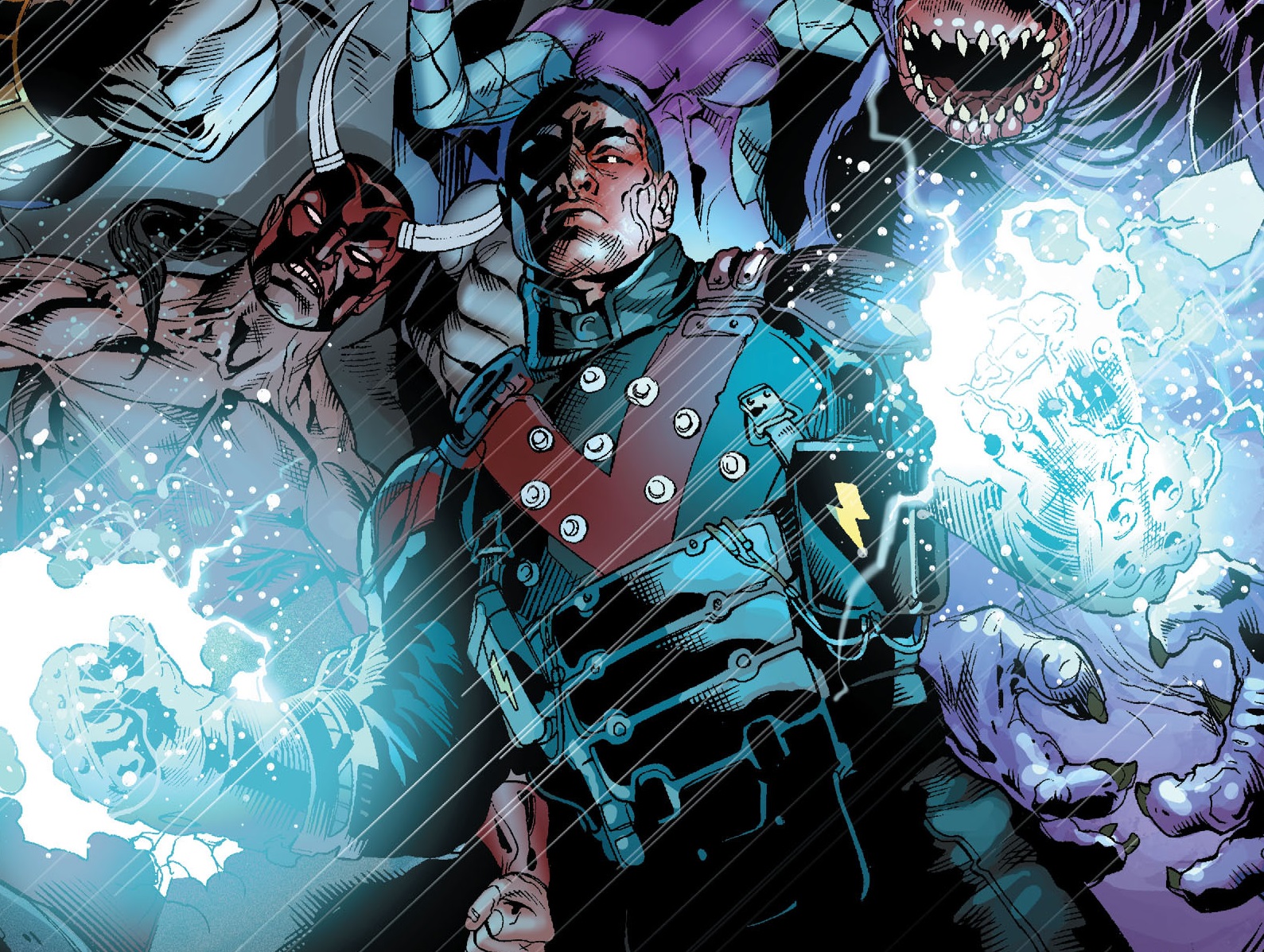 Heroes aren’t the only ones with shocking abilities. Lester Buchinsky aka the Electrocutioner wears a suit that allows him to manipulate the electricity coursing through it. He is typically hired muscle for Batman villains like Blockbuster and Cluemaster. Although, he did have near-death run-in with Green Arrow and Speedy when working with Prometheus in Rise of Arsenal. Lester has cropped up in Justice League Unlimited, Batman: Bad Blood, and in the Arkhamverse. Most recently, he appeared as an antagonist in Wonder Twins. 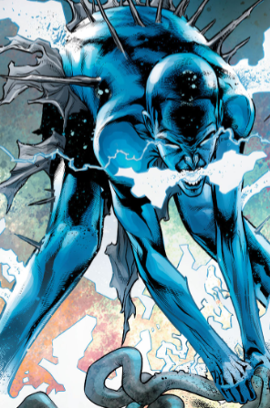 This Catwoman villain was a former henchman/ inventor for the Penguin. During a battle in Catwoman #21, Volt fell off of a building into electrified water. With a name like Volt, how could he not see this coming? He’s only made a few appearances, but his name exudes villain and he definitely needs to be in more. How about he squares off with another character on this list, Black Lightning perhaps? 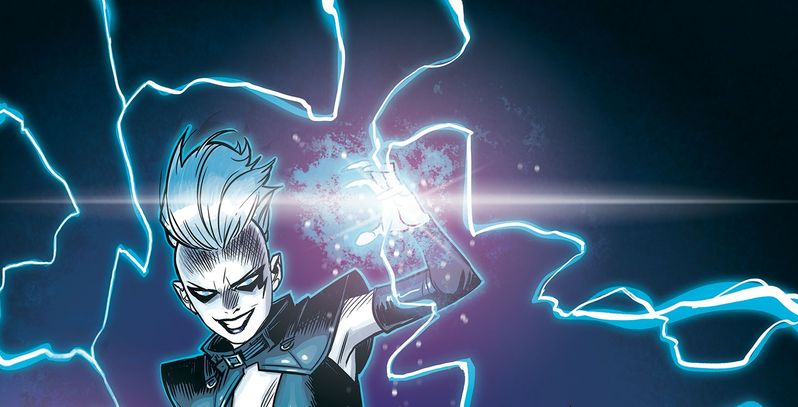 First appearing in Superman: The Animated Series, this shock jock was struck by lightning during a rock show. It changed her physiology allowing her to harness the powers of electricity. Don’t ghost her or she’ll travel across the phone lines to see why you haven’t texted back! She’s been on both sides of the law and has helped out Superman a few times. Livewire has continued her small screen appearances as a villain on both Supergirl and Young Justice.

Hailing from the 5th Dimension (home of troublemakers like Mr. Mxyzptlk and Qwsp) comes another character who hates vowels: Yz. Better known as Thunderbolt, this genie first made contact with Johnny Thunder. These two worked together alongside the Justice Society of America. Years later, Yz was found again by the young Jakeem Williams (aka J.J. Thunder) when Jay Garrick gives him a pen containing the genie. Johnny Thunder and Thunderbolt were big players in Doomsday Clock. However, aside from a few cameos, these characters have been mostly trapped inside a pen.

What electric hero is your favorite? Talk about it in our Community!