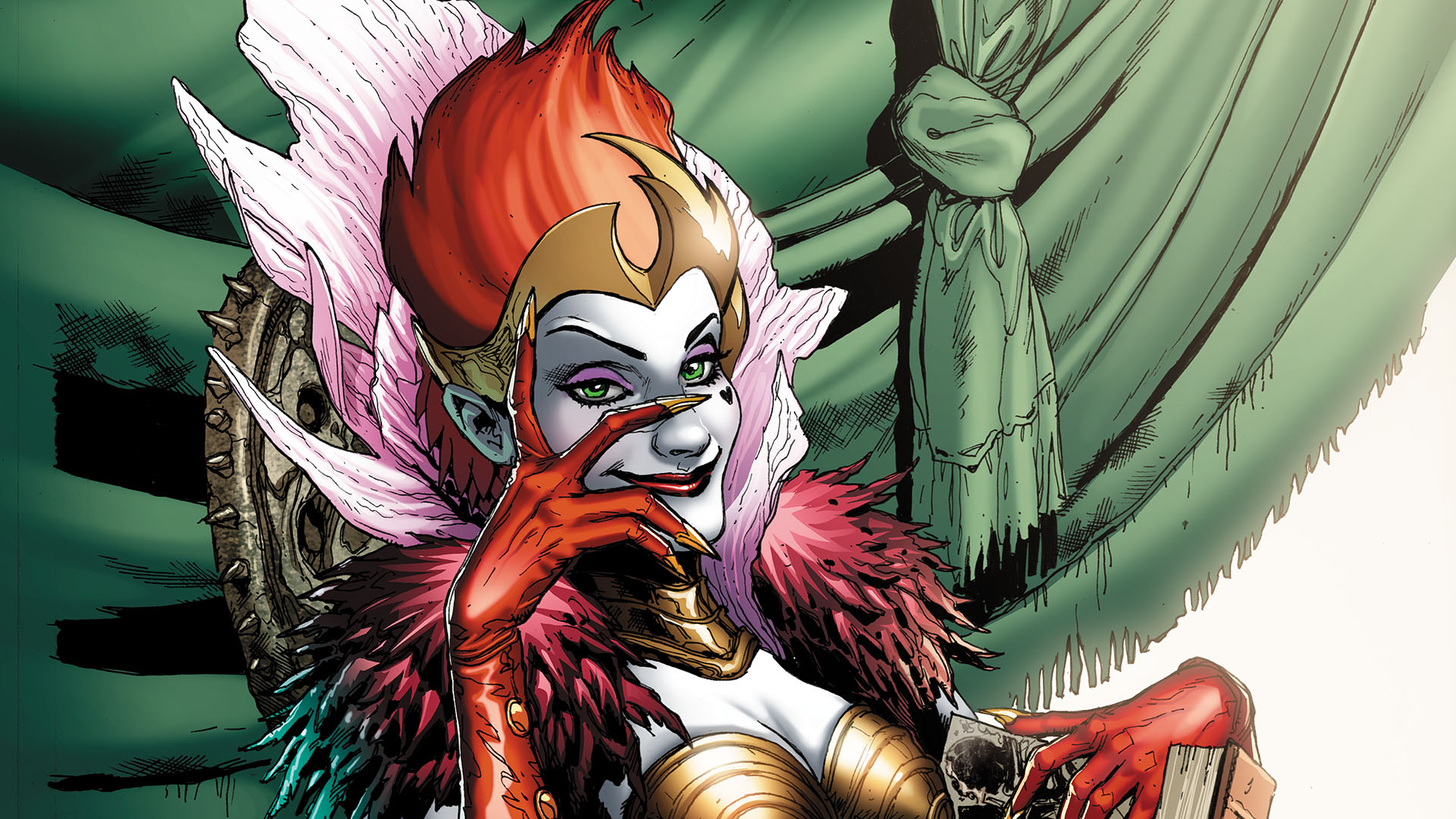 Drama Queen: 5 Things to Know about the Queen of Fables

Meet the Queen of Fables! She’s a sorceress who spent years in a book, and is ready to show the world her own version of “happily ever after.” Don’t expect Mother Goose, because this storyteller has nothing but evil intentions. She was originally known as Tsaritsa, before gaining her title as the Queen of Fables, and now she’s getting ready to show the world what she’s made of on the latest episode of DC Universe’s Harley Quinn. Would she make a good addition to Harley’s crew? Before we find out, let’s prepare ourselves by getting to know her a little better.

SHE SPENDS A LOT OF TIME IN BOOKS 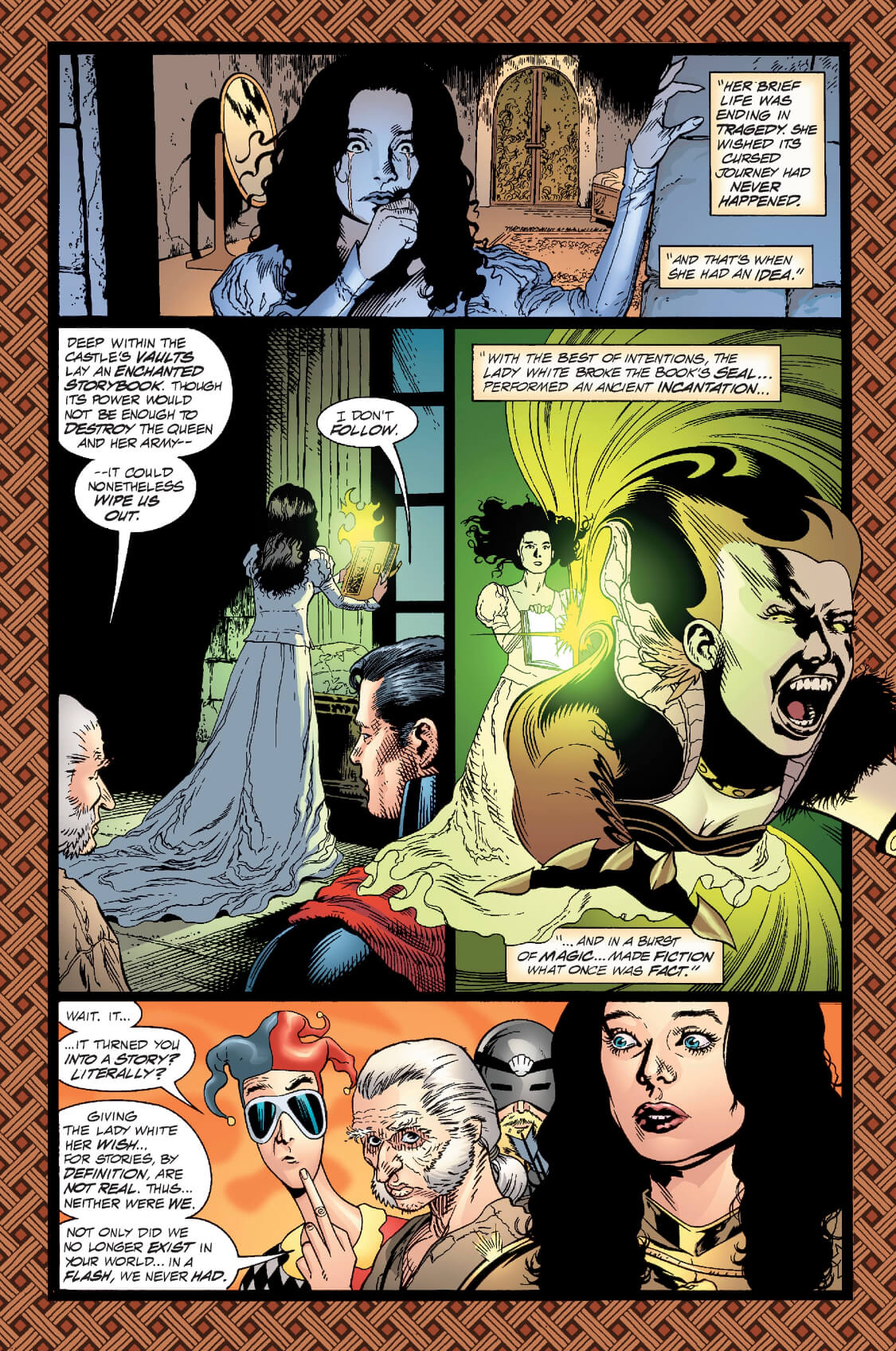 Some people like to curl up and enjoy a good book, but the Queen of Fables takes things to a new level but curling up INSIDE THE BOOK. When the Justice League of America first faced Tsaritsa (in 2000’s JLA 47-49) they learned that she had been trapped in the Book of Fables many years ago, and had spent centuries living within those pages until she was freed. After the League defeated her, the Flash had the inspired idea to trap her in a Tax Code manual, reasoning that there wouldn’t be anything too imaginative for her to draw her powers from. Reading is awesome, but being trapped in two different books is not an ideal experience. Is it any wonder that Tsaritsa has such a sour disposition?

SHE CAN REMAKE ALL OF REALITY 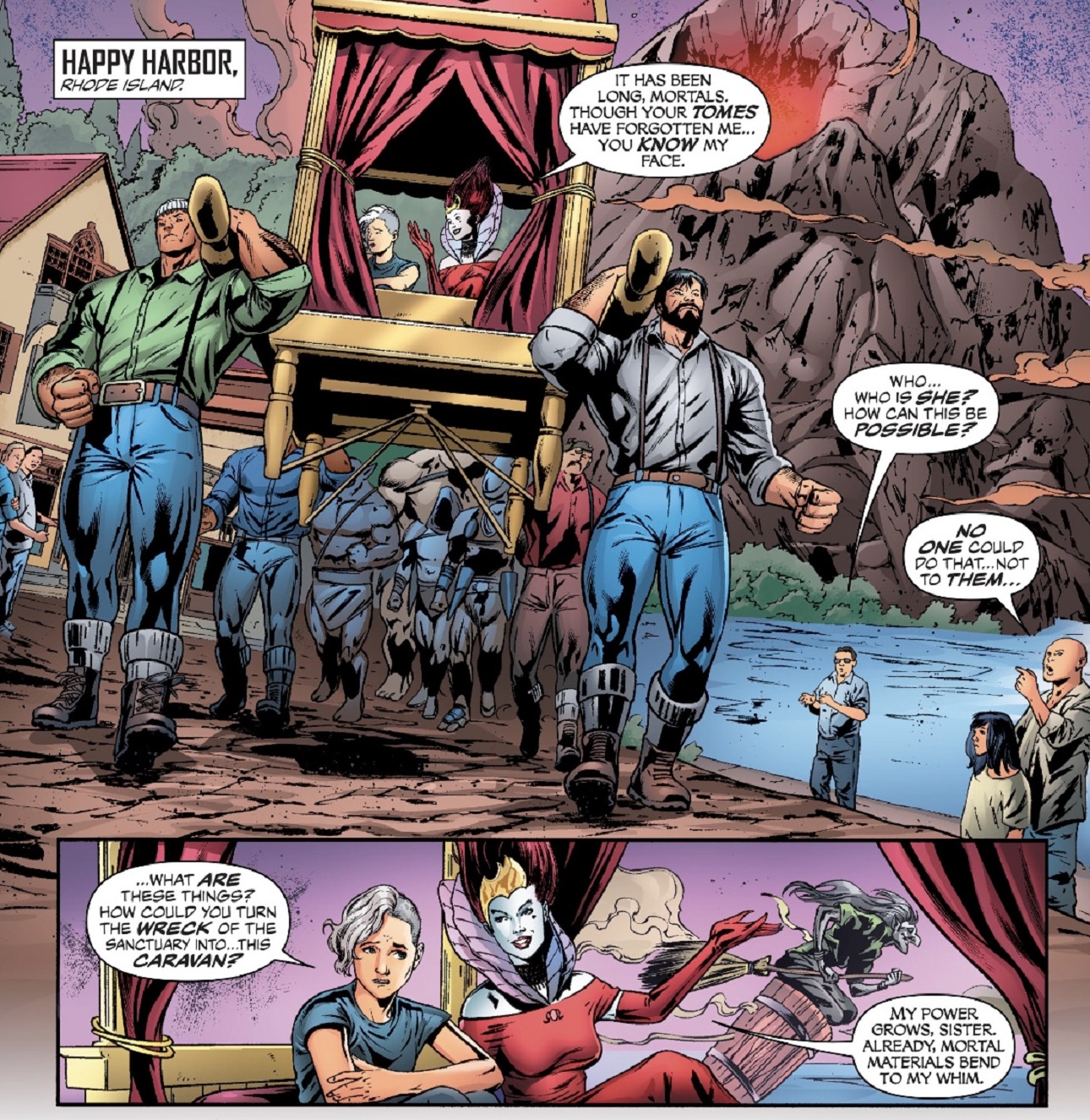 The Queen of Fables is one of the most powerful beings in the DC Universe, thanks to her ability to remake the world around her. Her powers of sorcery has allowed her to conjure enchanted forests, summon fantastical creatures, and enslaved the citizens of the world. In 2018’s Justice League of America #22 Tsaritsa demonstrated her abilities when she turned a wreck into a caravan, and gave the surroundings a more fairy tale flavor. She created an army of woodsman from scratch and used them to parade herself around and show dominance to the world. The Queen of Fables is no laughing matter, and any hero who underestimates her powers will quickly regret it.

SHE LITERALLY CAN’T HANDLE THE TRUTH 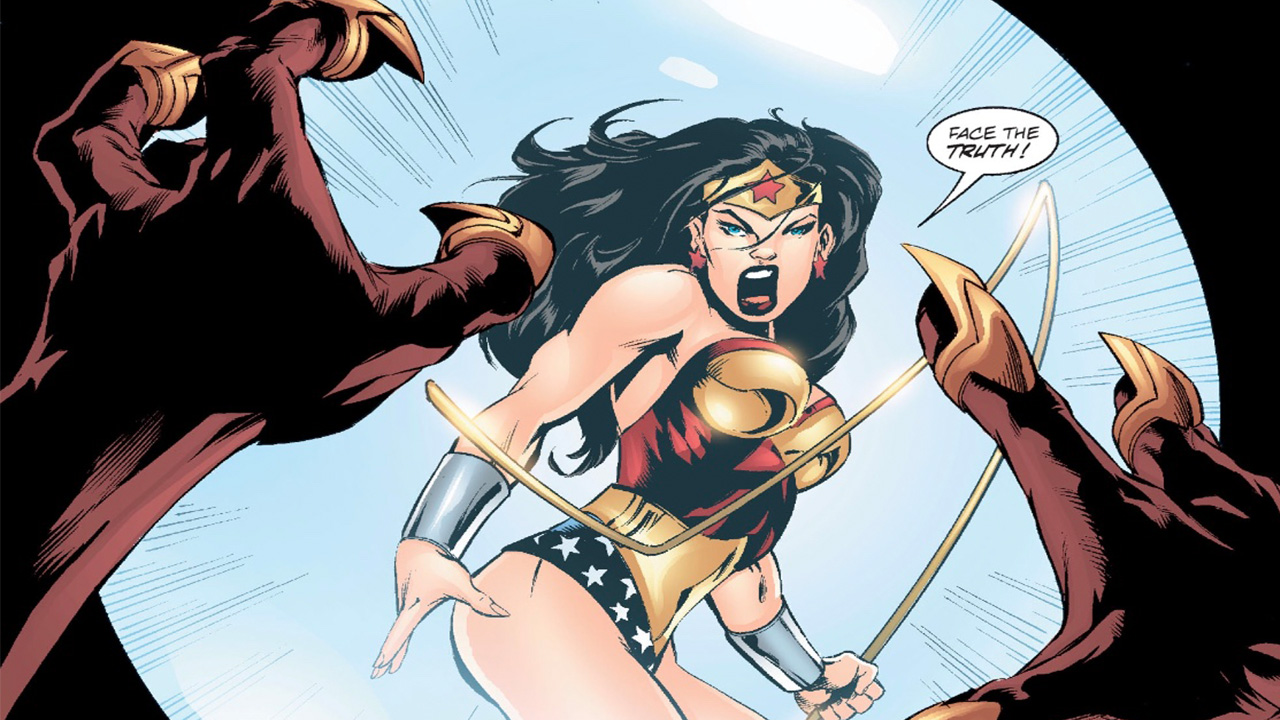 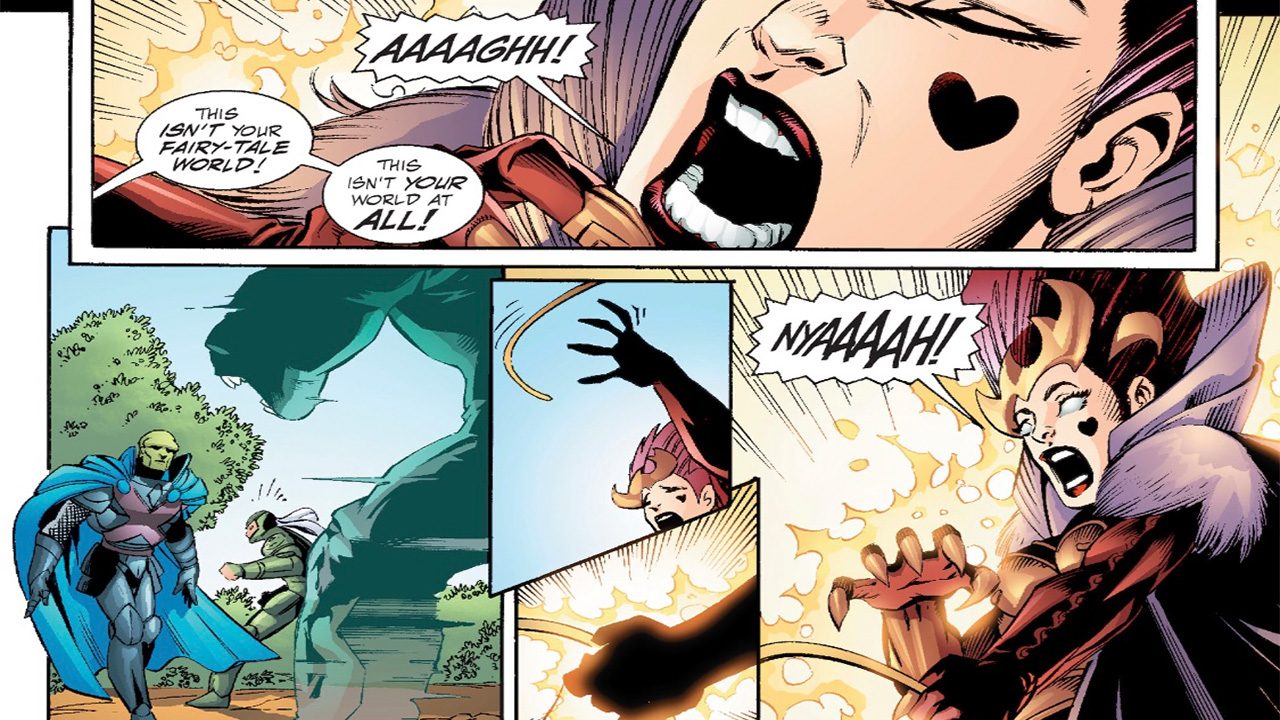 Do you remember that scene from A Few Good Men where Jack Nicholson shouts “you can’t handle the truth!” to Tom Cruise? Nicholson might as well have been talking about the Queen of Fables, because she literally can’t accept the truth. That isn’t hyperbole, Tsaritsa has a limited grasp on reality, and when her illusions shatter she goes nuts. When you spend years living inside of a fantasy book it’s hard to see the world for what it is, so the Queen of Fables thinks the entire world is a fairy tale. In 2000’s JLA #49 Wonder Woman used her Lasso of Truth to show Tsaritsa the world for what it really was, which caused the villainess to have a complete mental breakdown. The Justice League were able to take advantage of her distressed state and defeat her. Nobody likes hearing that Humpty Dumpty isn’t canon, especially if you’re the Queen of Fables.

SHE THINKS SUPERMAN IS HER BAE 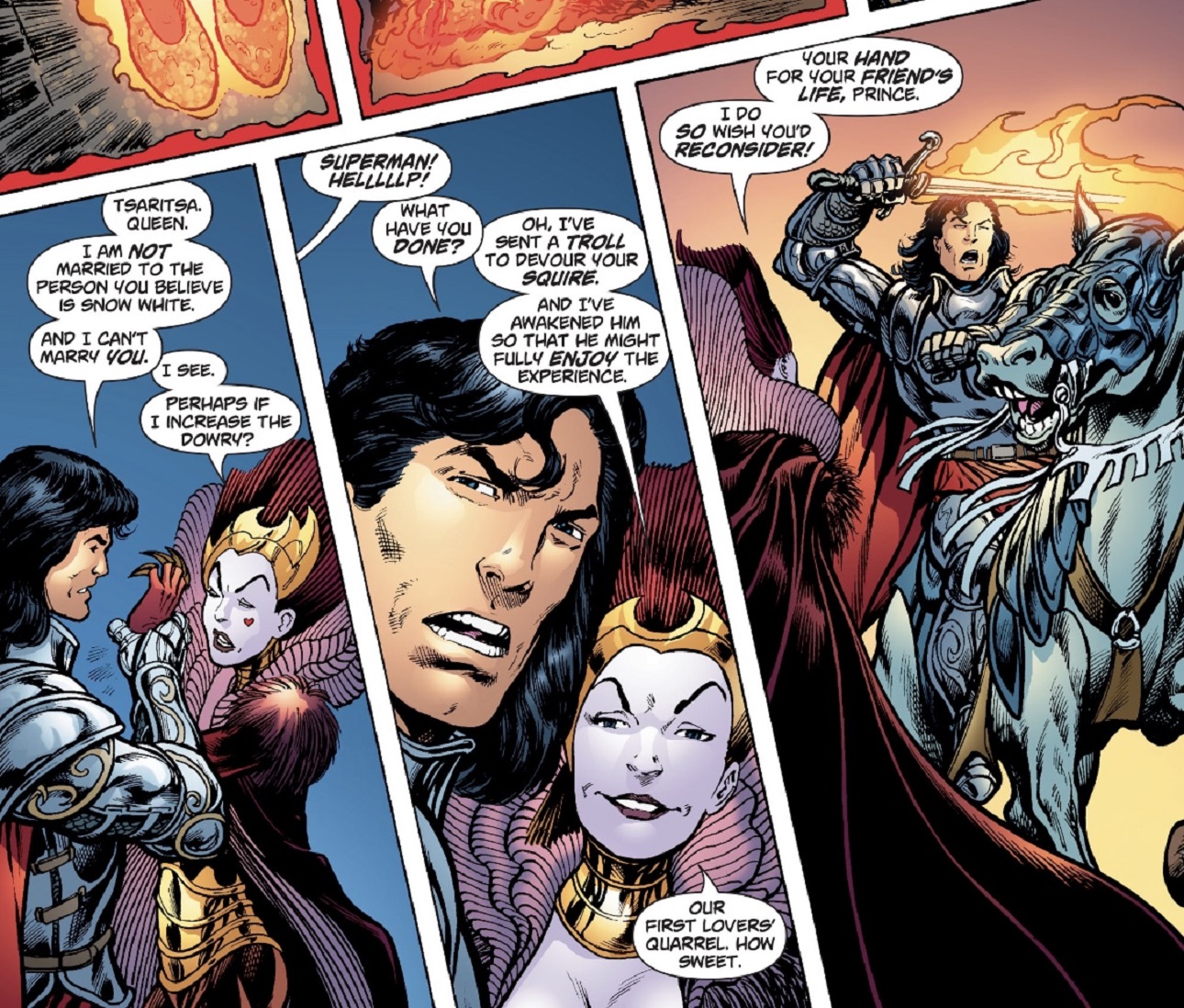 The Queen of Fables thinks life is a fairy tale, and she fancies Superman as the key to her happily ever after. Although he helped the Justice League trap her in the Tax Code book, Tsaritsa is crazy for Kal-El, and wants to make him her own Prince Charming. In Action Comics 833-834 she pursued the Man of Steel romantically, and told him to forget all about his marriage to Wonder Woman. That’s right, the Queen of Fables was convinced that Superman and Wonder Woman were married, despite him continually telling her that Lois was his true love. Tsaritsa also used her magic to remake Superman’s appearance, giving him princelike locks, and a suit of armor. Despite these gestures, and the offer of a generous dowry, the Man of Steel rebuffs her advances and defeats her.

SHE MADE A BAD WONDER WOMAN MOVIE 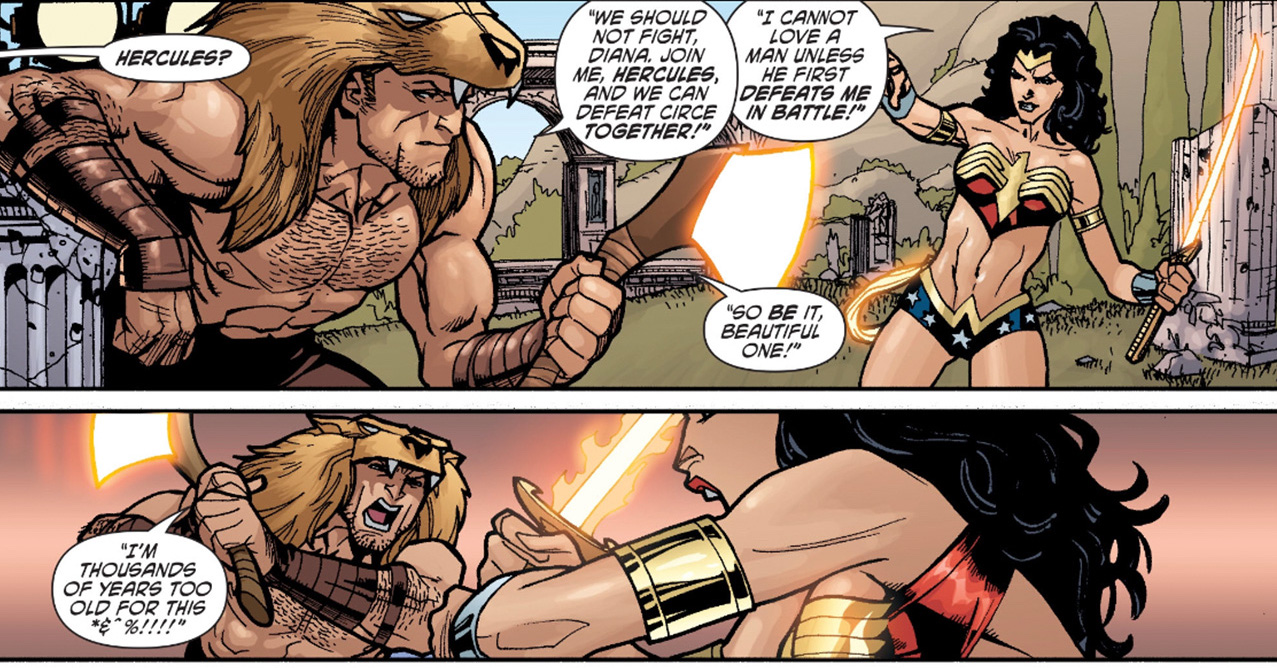 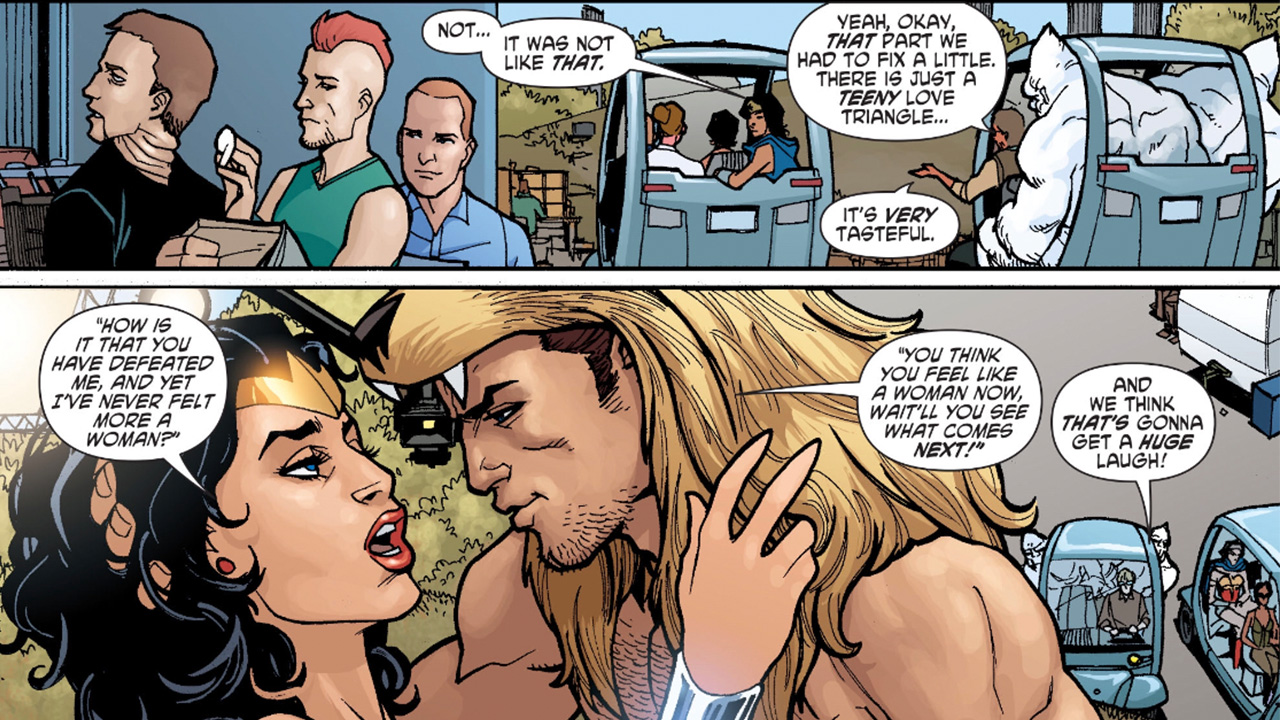 Did you enjoy the 2017 Wonder Woman movie? Patty Jenkins did a wonderful job, and it’s a good thing she signed on to direct because the Queen of Fables almost sabotaged the movie years earlier. In 2008’s Wonder Woman #24 Tsaritsa disguised herself as a Hollywood executive and presented her take on what a Wonder Woman movie should be. To say it was cringeworthy would be an understatement. There was unnecessary love scenes, bad jokes about men leaving the toilet seat up, and major disrespect to Amazonian culture. Diana was not too pleased and demanded that the production be shut down, but the Queen of Fables insisted on moving things along. A battle ensued, and thankfully Wonder Woman triumphed, paving the way for Patty Jenkins to make her movie the RIGHT WAY in 2017. Don’t worry folks, the Queen of Fables was nowhere near the brainstorming sessions for Wonder Woman 1984, so it should be a quality flick.

Now that you’ve gotten to know the Queen of Fables, check out the latest episode of DC Universe’s Harley Quinn to see what her next move is. We’ll give you a hint – a picnic that’s unforgettable for all the wrong reasons!

Should Harley add the Queen of Fables to her crew? Give us your thoughts in our Community!