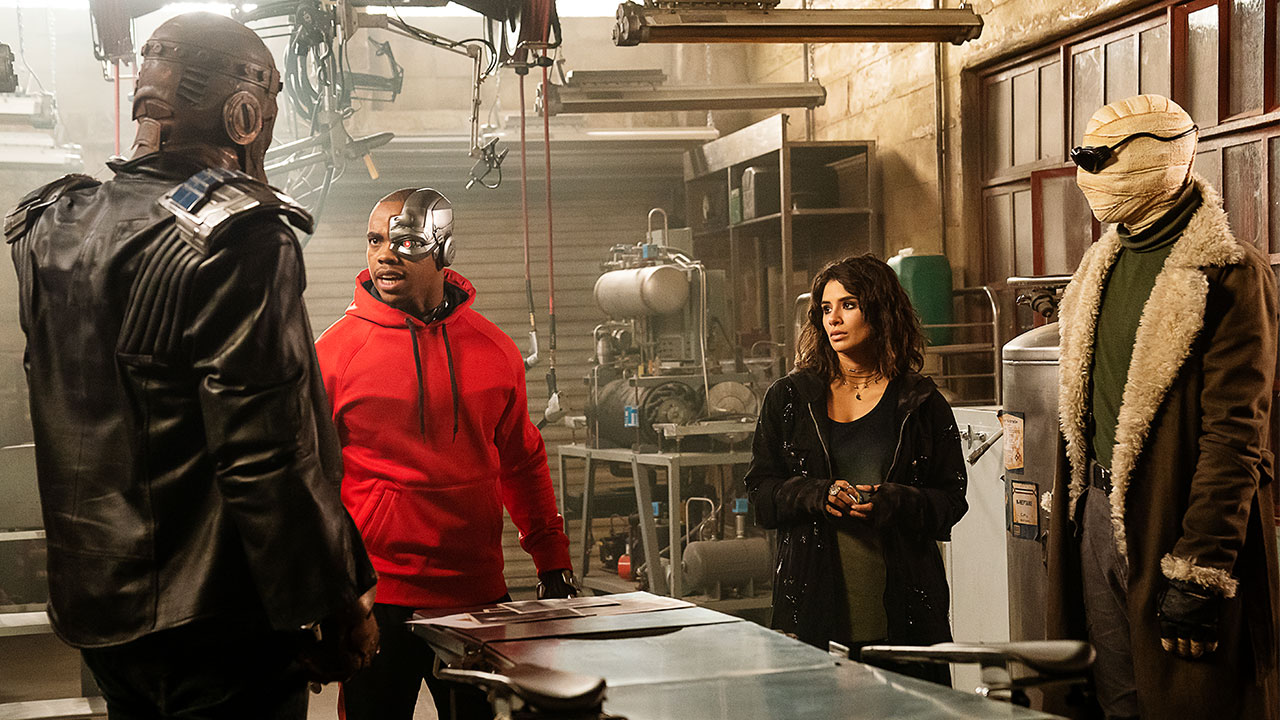 Now that Cyborg has joined the team at Doom Manor the hunt is on for The Chief, who was last seen entering a black hole in the middle of Cloverton, which is, judging by the opening of Doom Patrol episode 3, "Donkey Patrol", not something that the residents have forgotten. As Jane posts missing flyers for her errant father figure the townspeople are less than happy. Of course, Hammerhead doesn't care, taking over and stapling a flyer to the forehead of one especially cranky man. So yes, it's business as usual for the World's Strangest Heroes.

Vic, the newest member of the group, is still coming to terms with the fact that Mr. Nobody showed him a different version of his past, one which doesn't fit with the sanitized guilt trip that his father has controlled his life with. Meanwhile, Rita and Cliff search the Chief's lab to find an answer, and Cliff comes across a file that includes his daughter's phone number. Before he can share his discovery, Rita finds a vital clue, a picture of the donkey who was apparently holding Cloverton and Mr. Nobody's secrets in its gut.

As the team assembles for a briefing, it's clear that Vic isn't the only one thinking about his past as we get a look at Larry's history. We know from the first episode that Larry lived a double life before he became the Negative Man as he had to keep his sexuality and relationship with his partner John a secret. This is affirmed in a flashback, as we see the pair argue about Larry's secretive nature the night before the fateful day which turned him from all-American hero into the superhero/outcast we know today.

After Vic takes the lead it's off to Paraguay for our misfit makeshift family, though their new leader's plan to use a private S.T.A.R Labs jet is quickly cut off by his controlling father. So they take the school bus on a two-week road trip to save the Chief, trying not to kill each other on the way. Alas, they've yet to get close to their destination when Larry gets into an argument with the Negative Spirit, who decides to crash the bus to punish his host for trying to lay down some boundaries. Finding sanctuary at a nearby motel, it's sleepover time for the team, but whilst the others try and settle in Larry is back in his own head thinking about his wife and the unhappy life they led.

Jane offers up some useful advice to her fellow freak, encouraging him to treat the spirit that lives inside him with a little respect and agency. With everyone in a rather reflective mood, Cliff almost calls his daughter before deciding that harassing Vic is a better use of his time. Rita struggles with her powers, causing a delay in the journey, which uncovers another of Jane's personalities and super powers. Flit apparently has the power to teleport; and, growing impatient, she grabs Cliff and Larry and whisks them off to Paraguay, leaving Vic and Rita in the Cheap and Sleep motel.

The trio quickly discovers that somebody is running a nefarious super-power clinic, where customers can get "The Morden" or any number of other mysterious and likely very dangerous powers -- including as a new friend tells them -- Magnet Feet... Soon the group is at an Alpine-inspired resort called Fuchtopia, where a puppet of the man who gave Mr. Nobody his powers in the first episode performs some serious exposition via an infomercial for the services his little haven provides. Including the part where he was a famed and notorious Nazi doctor.

Back at the motel, Rita and Vic face off over the fact that neither of them is capable of saving the Chief. Some self-reflection and a little help from Silas Stone leads the unexpected pair to the rescue just when they're most needed. While this little melodrama is occurring, it's an entirely different story in Paraguay -- where Cliff, Larry, and Jane are learning all about Mr. Nobody and the fact that Niles was there when he was created. As much as Cliff -- apparently the only sensible one on the team -- wants to leave, Jane and Larry insist on staying in Fuchtopia to find out more about their leader's connection to the horrific holiday resort.

Though they're short on cash, an offer from Jane to give up some of her blood means the three Doom Patrolians are on their way to get upgraded. It's flashback time for Larry again as we get to see another part of his backstory -- a Doctor Manhattan tale, which sees him kill an entire hospital's worth of people with his radioactive body before being imprisoned in a lead cell, where his wife leaves him to rot in the hopes of a better life.

Back in Fuchtopia, Larry has entered the horrors of the interdimensional chamber and Jane is given an audience with the leader of the Alpine hellhole. The doctor is now kept alive via green goo, a number of pipes, and a wind-up lever. It's a sight to behold, but of course Jane isn't fazed. That is until the doctor offers to assist her in ridding herself of her personas. For the first time, we see the original form of Larry face himself in his Negative Man garb, housing the spirit. We also get our first proper insight into Jane's backstory as she reveals she was experimented on by scientists, who gave her her powers.

As she faces down the doctor, Larry battles the spirit, and Cliff explores the bowels of Fuchtopia, protected by brainwashed man-children, each of which is controlled by the mad scientist who established the clinic. Jane and Cliff both have a blast (and so do we) as they take down the Nazi puppets in an exceedingly bloody fight sequence. A highlight of which is Cliff tearing the legs of one Nazi and beating another one to death with them. Jane dispatches the fascist fleabag leader, enabling the team to escape. Though none of them are the quite the same as when they arrived.

Longtime comic fans will be happy with the final scene, which teases a new addition to the show in the form of Animal-Mineral-Vegetable Man -- complete with dinosaur head and celery hands. No, there's nothing quite like Doom Patrol.

What did you think of "Puppet Patrol"? Let us know in our Community!