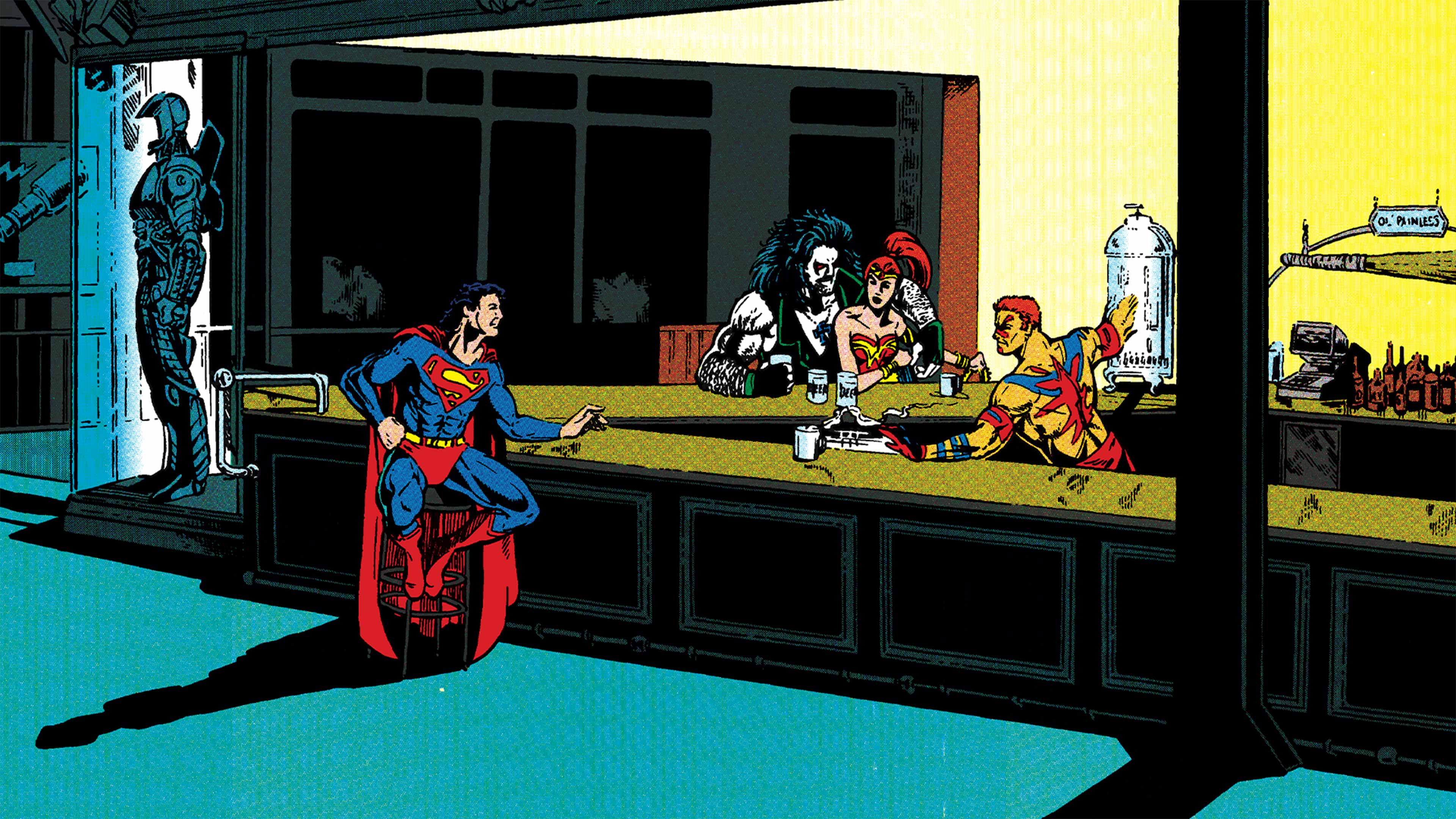 Happy St. Patrick’s Day! Are you all ready to party? We know that some of you might not be able to head to your favorite drinking hotspots this year, but DC Universe has you covered! If you can’t celebrate St. Patrick’s Day at the bar, why not join us for our virtual pub crawl? You don’t have to change out of your sweatpants, you don’t have to pay inflated rideshare prices, and you get to read some awesome comics! If you’re not a drinker, then no sweat, there are plenty of fun sights to see on this pub crawl, even if you never touch a drop. So get ready, because this St. Patrick’s Day adventure is going to introduce you to hunky bartenders, demons from Hell, and a chimp that can sling a mean drink. Intrigued? Then let’s get started…

Let’s begin by heading over to Metropolis. We know the Hob’s Bay neighborhood may seem a bit sketchy, but you’re going to love our first stop. 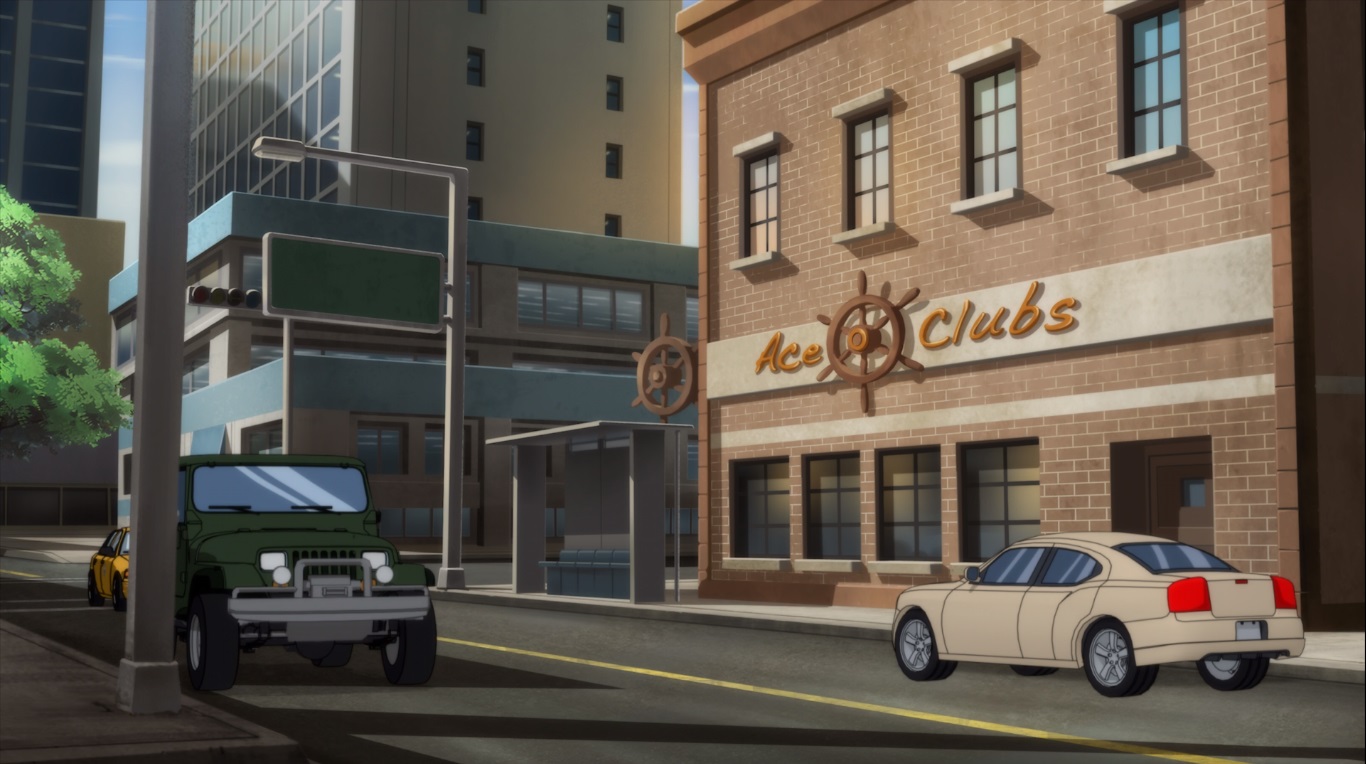 Bar Trivia: If you want to start a bar brawl in seconds, say something negative about Superman, and watch how fast Bibbo introduces you to his fists.

Wasn’t that fun? The place is a bit dirty, so make sure you wash your hands before you leave, and now we’re going to head to our next stop… 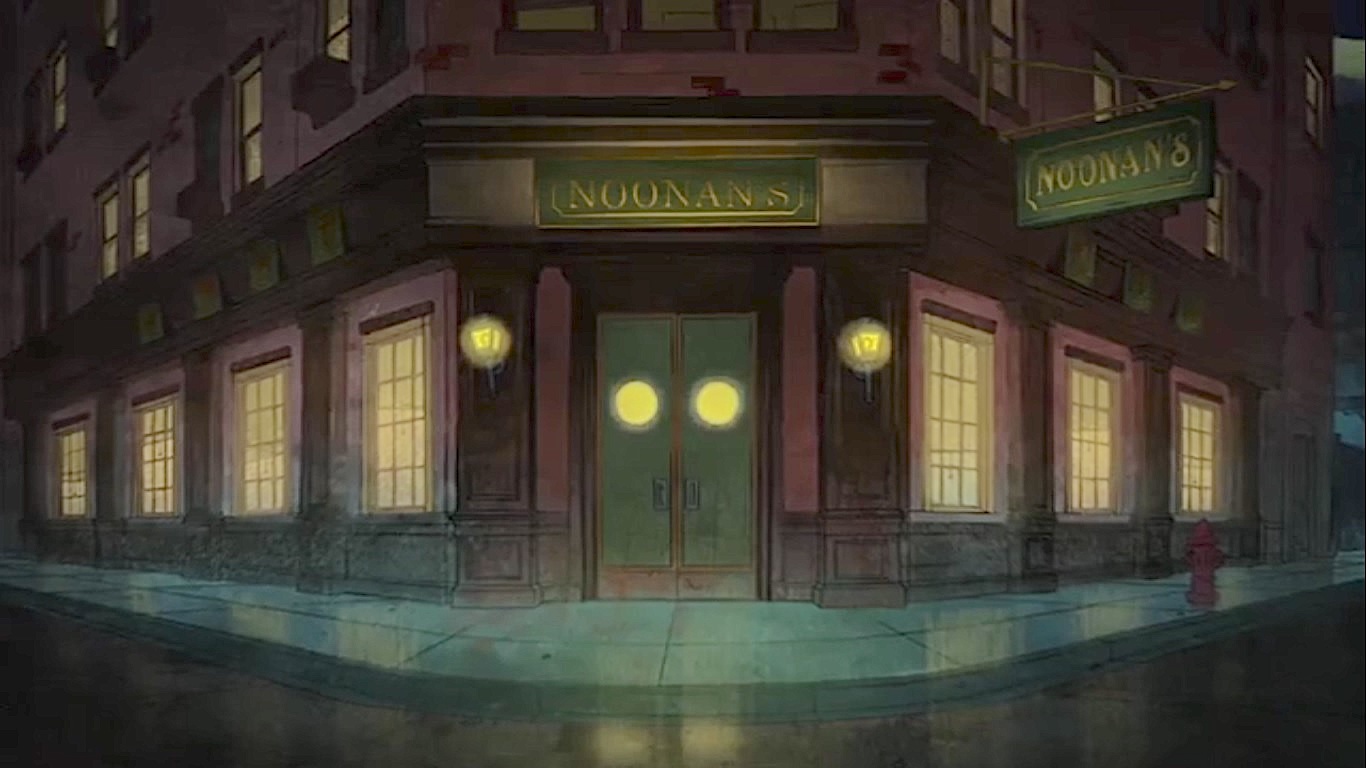 Bartender: In Hitman #29 patrons were introduced to Noonan’s new bartender – Baytor, a demon who once ran the underworld. It’s a great thing to have on your resume if you’re going to bartend in Gotham.

Warning: Please check your drinks for mud. As we saw in Harley Quinn episode 3, “So You Need a Crew,” the shapeshifting villain Clayface occasionally works as a relief bartender, and he wasn’t careful about his excess mud falling into the drinks he prepared.

Bar Trivia: Sometimes a crook needs a place to feel at home, so hitman Sean Noonan opened up a bar where like-minded criminals can gather without having to worry about Batman or the GCPD.

If that place was a bit too divey for your taste, let’s take our rideshare across town to something a bit more upscale. 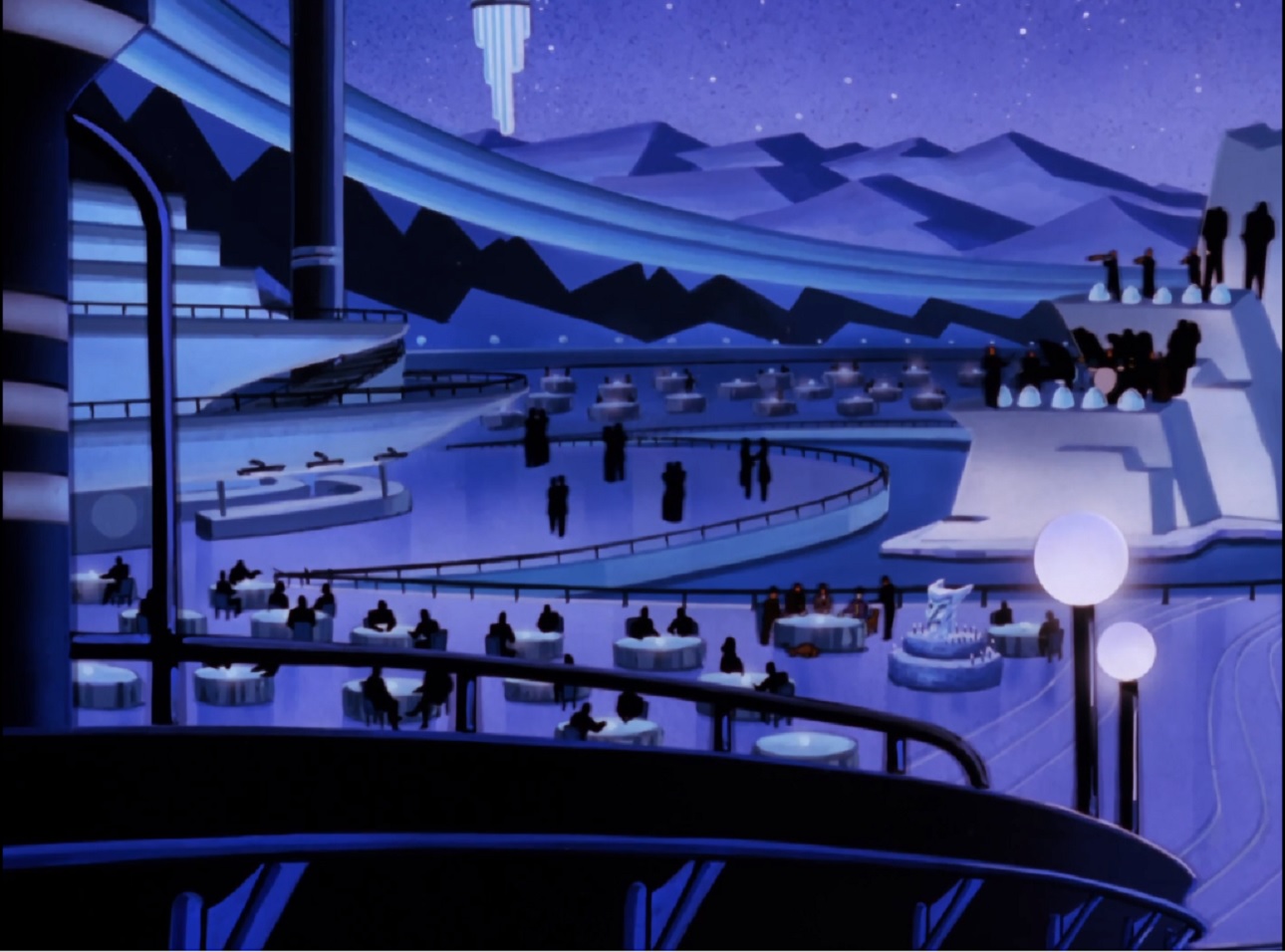 Entertainment: In addition to grabbing a drink and rubbing elbows with Gotham’s elite, the Iceberg Lounge was recently upgraded and added a casino. Liquor, gambling, and criminals, what could possibly go wrong?

Bar Trivia: The club has a large aquarium with penguins, seals, and other arctic-aquatic life.

It’s getting a bit chilly in here, so let’s head across the bay to Bludhaven. We hear this next spot has a bartender that you have to see to believe!

Bartender: Depending on when you're stopping by, you might have the pleasure of being served by their hunky bartender Dick Grayson.

Awesome Menu Item: Nothing fancy! Hank Hogan, the bar’s owner, says all his customers want are beer and shots. If you're looking for something that has the word "infusion," or "muddled," head back to the Iceberg Lounge.

Bar Trivia: Hank Hogan was a former police officer, so his bar became a hangout for Bludhaven’s finest. The cop patrons don’t care about any of the violations and city ordinances the establishment breaks, including letting a young boy work the kitchen.

Location: Manhattan, with other franchise locations in Coast City and the planet Oa.

Awesome Menu Item: Guy is real proud of the Gardner Salad and Guy’s Fries, which he claims are the best in Manhattan. Guy is known to exaggerate, so take his word with a grain of salt.

Bar Trivia: If you’re a superhero nut, then you’ll love this place. The bar is decorated with authentic superhero memorabilia, including a deactivated Manhunter robot.

Since we’re already in New York, let’s swing on over to Long Island and check out another superhero-owned bar!

Bar Trivia: Bruce Wayne financed Gabriel’s Horn, which was also used as the Teen Titan’s secret headquarters. We’re not sure why Batman thought letting a group of teenagers open their own bar was a good financial decision, but whatever, he's rich.

As much fun as New York is, we think it’s time to head to a slightly more swampy locale….

Location: In the bayous of Marais, Louisiana.

Awesome Menu Item: If you’ve seen Swamp Thing or DC Daily, then you’d know it’s all about that toitle soup!

Bar Trivia: If you hang around the dining room you might be lucky enough to get your fortune read by Madame Xanadu, or spot former movie star Daniel Cassidy.

That was a bit spooky, but since we’re already dabbling in the supernatural, let’s hop into this interdimensional portal for our last stop…. 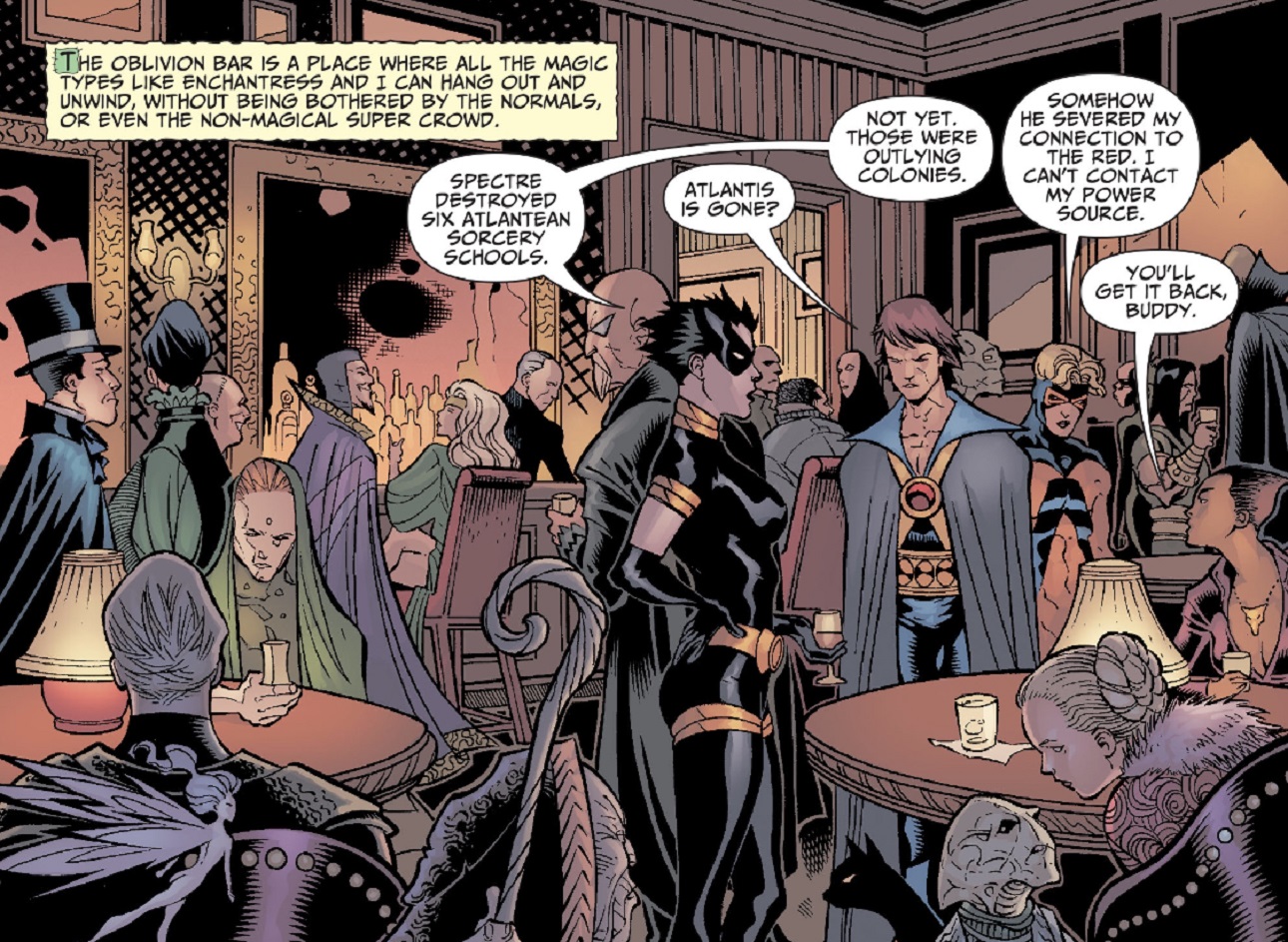 Proprietor: Nightmaster use to run the bar, until Detective Chimp took things over in 2018’s Justice League Dark #1. It’s probably the only bar in the DC Universe run by a chimpanzee, which might be against a few health codes, but hey! That's what magic is for.

Location: An interdimensional plane between universes. No, you haven’t had too much to drink, that’s really where it is. Good luck getting your Lyft to pick you up...

Awesome Menu Item: Players of the DC Universe Online MMORPG can get a closer look at the menu, which includes baby back ribs and pea soup. We haven’t tried it though, we’re just hear to watch a chimpanzee bartend.

Bar Trivia: The Oblivion Bar’s dimensional entrances can be only accessed by being with magical powers, which means that things get very interesting inside.

Just think, our first stop was a rough place in Hobs Bay, and now we’re in an interdimensional pub owned by a monkey. And it’s still only the 4th strangest St. Patrick’s Day pub crawl we’ve ever had! Remember: drink responsibly, and if you can’t go out and party this St. Patrick’s Day, enjoy some of great DC Universe comics!

If you could grab a drink at any DC Universe pub, what would your first stop be? Let us know in our Community!