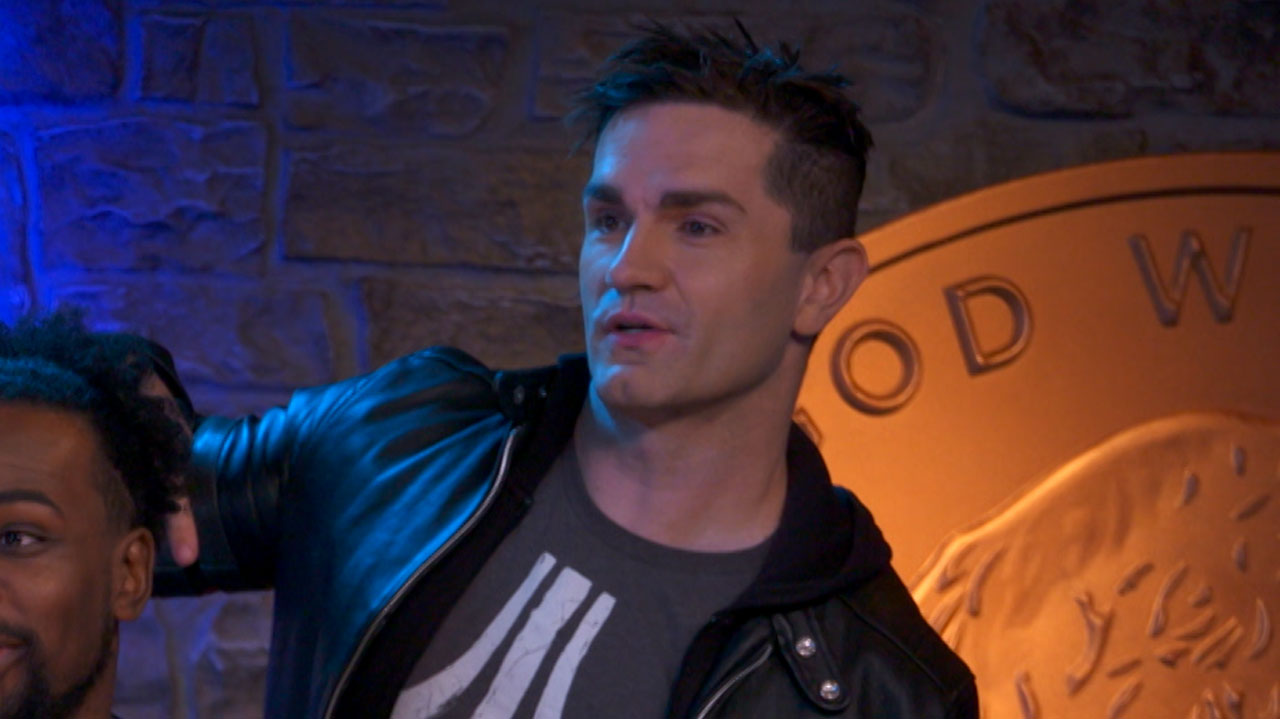 Sam Witwer has traveled to many corners of the DC Universe, from playing Doomsday on Smallville to voicing the Ocean Master in Justice League: Throne of Atlantis. Now he’s joined DC’s newest team, the Breakfast League, where he’s embarked on a coming-of-age adventure with a handful of friends. DC Universe All Star Games is Sam’s latest contribution to the multiverse. We recently had a chance to chat with Witwer, and he broke down his love for all things DC. Here’s what he had to say…

How long have you been a DC fan? Did you grow up with these characters?

I always watched the Adam West Batman, which was incredible. That was sort of priming me to know who these characters are. I really started reading the comic books after the 1989 Batman film. There was just something about that movie, and having watched it recently, there is still something about that movie. I just lost my mind for the character of Batman, and I had always been into Superman since the 1978 Christopher Reeve movie. I was a DC guy through and through from birth. With Marvel I’m a very passive fan, but the DC characters, for some reason, really speak to me.

Did you play a lot of role-playing-games as a kid?

Growing up, the one that we played the most was Star Wars. We played the West End Games Star Wars role-playing game, which, ironically enough, was the bedrock for all of the stories that we work on now. They were naming these things and codifying these things, and Lucasfilm was approving them. These role-playing games made me a huge fan of these things, and being able to professionally work on them just feels like a natural extension, indeed a continuation, of what I did when I was a kid. It’s the same thing with the DC stuff. There is a lot of lore out there, and while I’m not the expert in DC that I am in, say, Star Wars, I learned working on this that I knew it better than I thought I did. When Jon Lee Brody or Freddie Prinze Jr. would say, “Hey, wouldn’t it be fun to reference this?” I knew exactly what they were talking about. There’s fun places to go with this.

How did your experiences as an RPG gamer shape your role in DC Universe All Star Games?

It’s funny because wearing it on our sleeve, shooting it and putting it out so people can see it, is such a strange irony, because role-playing games and comic books weren’t things I led with when I asked a girl for her number in high school. [Laughs.] I kept this stuff secret. I was super into this stuff, and I’d play the Star Wars role-playing game, or Dungeons and Dragons, or read Batman comics, and I wouldn’t necessarily talk about it publicly. So when Freddie hands me this sealed box set with the DC role-playing game from the ‘80s, it occurred to me… I’m like, “I think the game needs to take place in the ‘80s. I think we actually should, as a story, harken back to who we were when we were younger.” For me, not quite the ‘80s. I went to high school in the ‘90s, but those ‘80s John Hughes movies were all about people who were hiding who they were because they weren’t quite comfortable being who they were out in public yet. So it seemed to me that if we were doing a role-playing game [for which] the rules were written in the ‘80s, with all the technology that is described in the books are from the ‘80s -- for example, Batman’s utility belt -- it also made sense to thematically make it about younger versions of all of us. These are teenage characters who are not confident, haven’t quite found themselves yet, worry about things like popularity, and acceptance, and making friends -- that’s what the Breakfast League is about.

Had you guys all been friends prior to this?

The only guy I didn’t know was Xavier Woods, and so he’s a new friend. In some ways, it was really fun to get to know him by playing this game with him. Again, what are people using RPGs for these days? Making friends, and making social bonds. These are things that, back in the day, everyone thought were damaging to kids, and now they’ve realized, this is a great way to get kids to come out of their shell. It lets young people express themselves creatively in an environment of no judgement. Many friends have been made and continue to be made around these gaming tables. Xavier and I are friends because of this experience that we just had.

What are some of your favorite DC stories?

I remember Grant Morrison’s Arkham Asylum scaring the hell out of me. I remember Batman: Year One blowing my mind. Dark Knight Returns exploded in my face. I read quite a bit of Superman stuff when I was off in Montreal shooting a TV show for four years. I had stacks of Superman graphic novels. I love the Earth-One graphic novel. I also love anytime that they use Christopher Reeve’s likeness in Superman: Secret Origin. That was really fun. It probably influenced me building in a secret identity mechanic into the Breakfast League. Spoiler alert: But there is a fun little mechanic that is not found in the game proper, but found in our version of the game.

What are your favorite DC movies?

Obviously the Burton Batman films, and the Christopher Reeve Superman stuff with John Williams’ music never ceases to give me goosebumps. By the way, I just want to point out, my band has played the Wonder Woman theme at gigs.

Oh, it’s incredible. That baseline, you don’t get better than that baseline. I remember watching Wonder Woman when I was a kid and there was a narrative that boys play with action figures and girls play with dolls. So there was this weird feeling of “Should I be watching this?” But I remember that theme was so good. Once the theme played, you couldn’t turn the show off because it was too good. That is an incredible theme. We all decided that we needed to play that at gigs.

You mentioned that’s when you were into RPG. Did you discover the DC animated series at that time?

At my house, I have a whole library of Blu-rays of DC animated stuff. Me and my buddy, who I still play music with these days, saw Mask of the Phantasm when it opened in theaters on Christmas Day 1993.

You were the other person that saw it that day!

Oh dude, I know. [Laughs.] I remember we walked out of the theater, and we were just kind of quiet for a moment, and then one of us said, “That’s about as good a Batman movie as one could ever ask for.” I had seen Batman: The Animated Series on TV, and I liked it, but I LOVED Mask of the Phantasm. I fell in love with it, and since then, I have paid a lot of attention to the DC animated films. For example, I have yet to watch, but I own, the Batman vs. Two-Face animated movie with Adam West and William Shatner as Two-Face. The way they animated a younger Shatner is amazing, because they would’ve hired Shatner to play Two-Face in the 1960s. That totally would have happened! [Laughs.]

How do you feel about the DC video games?

The Rocksteady video games were great. I love that they have the cast of The Animated Series. I remember playing the Arkham Knight game and lamenting the fact that it took a lot of courage to kill the Joker in the last game, and boy, it’s just so sad that we’ve lost the Joker. I’m loving this game, but this whole game, you can really feel there’s a mourning that is happening, even with Batman, about the death of the Joker. So yeah, I’m a little bit of a geek when it comes to DC stuff. [Laughs.]

I have to ask about your favorite DC villains because you’ve played Doomsday and Ocean Master, two of the greatest. Are those in your top five?

I would love to know when the DC animated people are going to ask me to play Doomsday. Can I make a monstrous voice? Can I do something weird with the character? I think I can do those things, so come on guys. I’m right here. It’s my character dammit. [Laughs.] As for my favorite villains, the Joker is obviously on that list, and I love Lex Luthor. I love that that character is actually far more movable and liquid than you would think. It’s so fascinating that whenever there’s a comic book, or some sort of adaptation, if Superman is doing something that’s maybe a little bit morally ambiguous, Luthor will balance him out by pushing himself toward the moral side. I love Luthor for that reason. I want to credit my new friend Jon Cryer for doing an incredible comic book Luthor on TV’s Supergirl. I thought it was amazing to get the comic book version of that character in live-action, and I had goosebumps when he shouted “Miss Teschmacher” to bring a little Gene Hackman into that. He played a hell of a Lenny Luthor in Superman IV: The Quest for Peace too. [Laughs.]

Is there any upcoming DC Universe releases that you’re particularly excited for?

Catch Sam Witwer on DC UNIVERSE ALL STAR GAMES! Do you think Sam should play Doomsday again? Let us know in our Community!