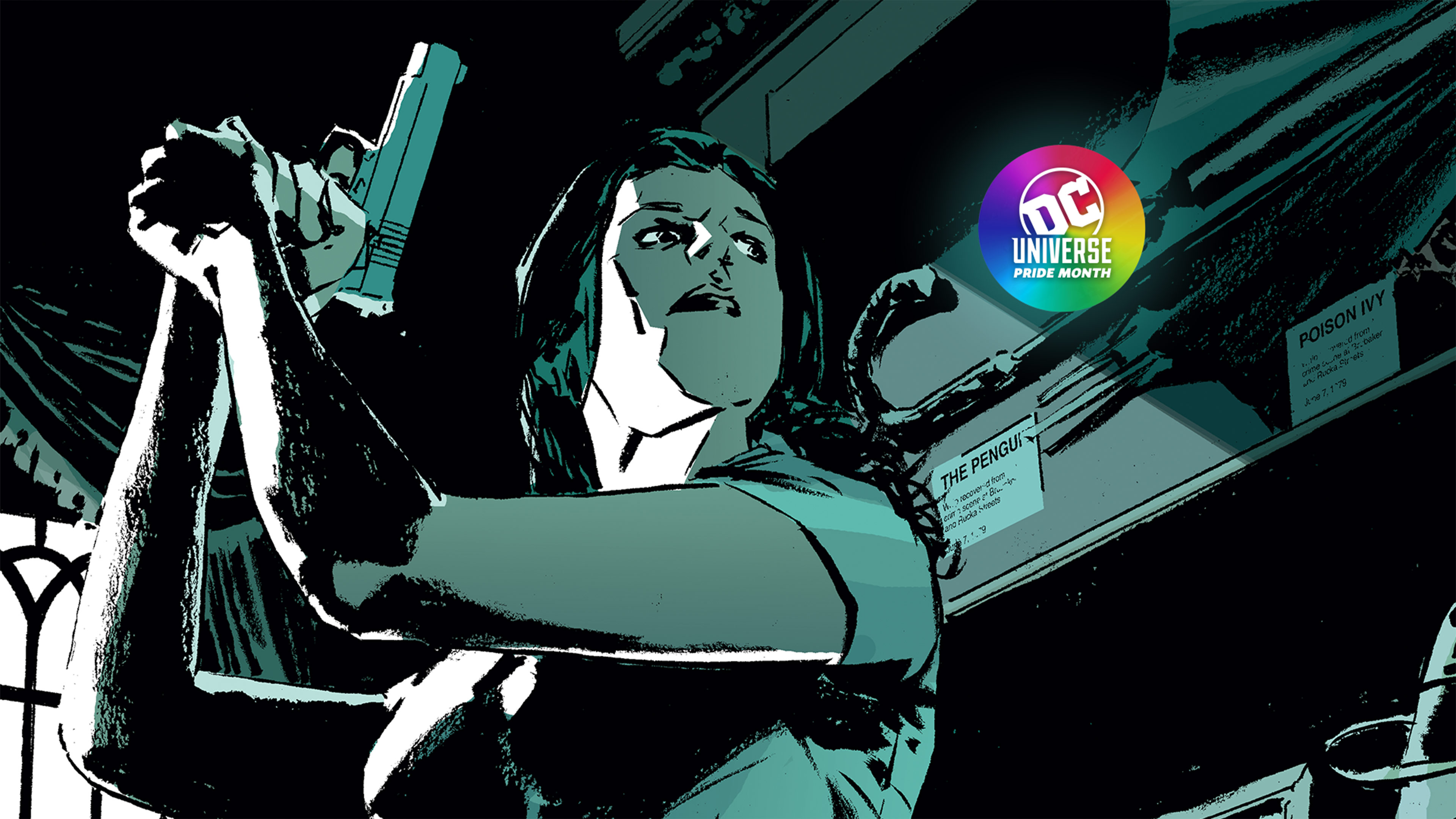 DC Pride: Greet the World With These 5 Coming Out Stories

Pride month is in full swing here at DC Universe and across the country. In our current climate, it’s never been more important to embrace your identity and celebrate the parts of you that form the person you are. But while pride is a lifelong journey, taking the first step can always feel like the most daunting. In a world full of prejudice, just being honest with the world about who you are can take courage worthy of a Green Lantern. It’s a challenge that millions of people around the world have to face… and one that even some of our greatest heroes have had to surmount as well. Here are five inspiring, illuminating, and heartwarming stories about coming out in the DC Universe. 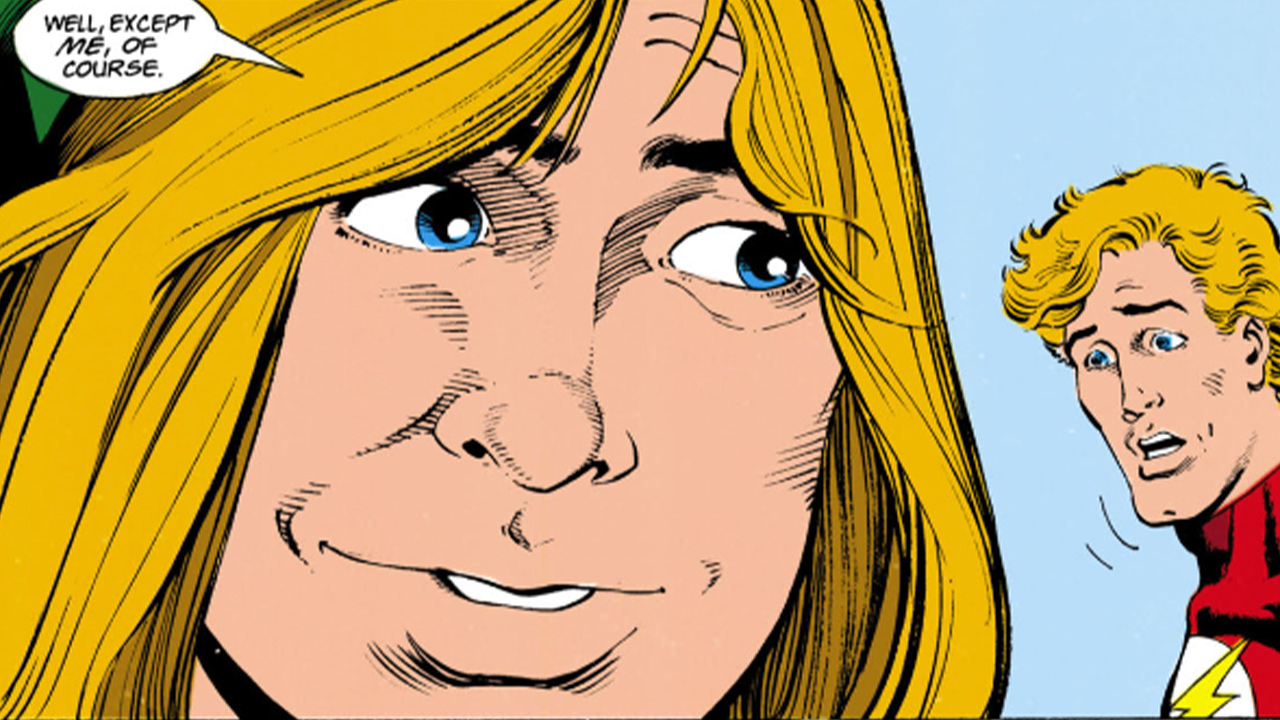 At a time when widespread gay panic was even more prevalent than it was today, William Messner-Loebs was breaking new ground in The Flash. In The Flash #53, Loebs gives Hartley Rathaway, the longtime Flash rogue known as the Pied Piper, a sympathetic turn by giving him a heart to heart talk with Wally West about his personal identity. More than that, Hartley takes to task the historical “gay coding” of villains throughout popular media, up to and including The Joker, which subtly instils mistrust of people with attributes associated with gay communities in children from a young age. Hartley knows that hatred is learned- whether it’s another group, or yourself- but it’s also something that can be unlearned. 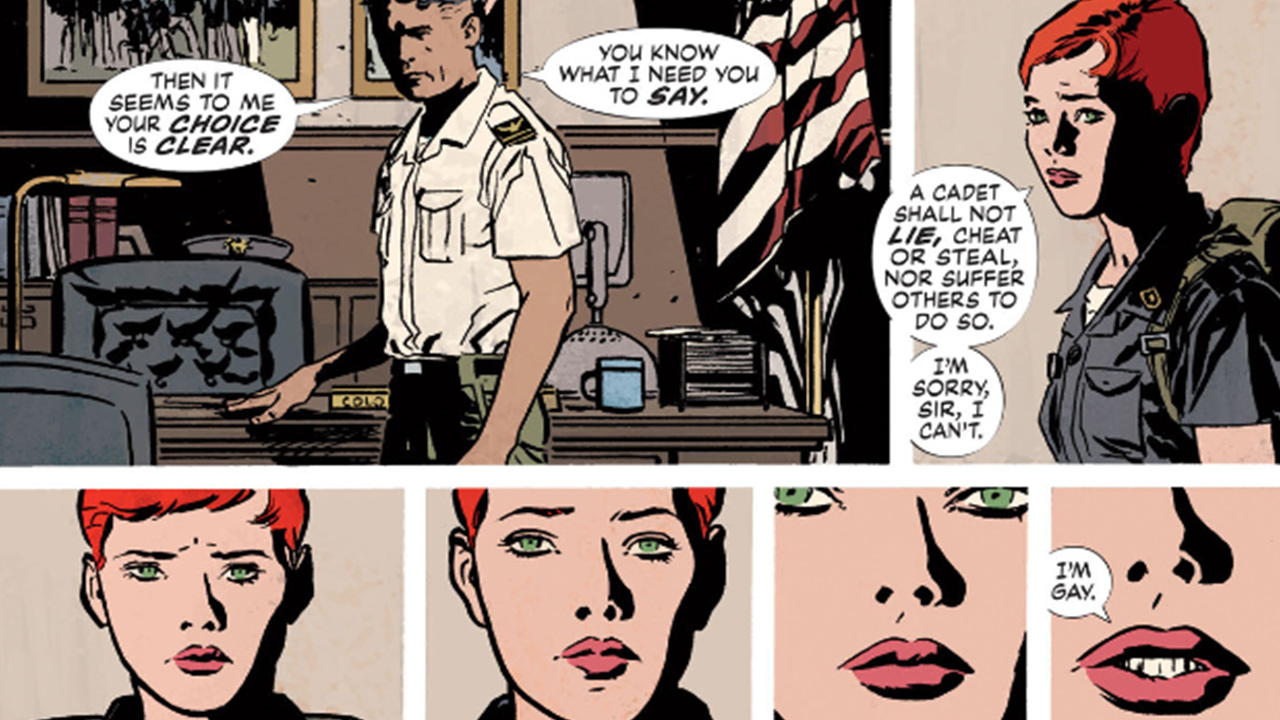 Let’s be clear: the wrong way to do a coming out story is to put the focus on the cisgender straight protagonist’s reaction to the revelation of queer identity, whether it’s one of acceptance or not. In a true coming out story, the hero must be the queer person themselves. While it’s true that Batwoman’s coming out story is emotional because of the surprising acceptance and pride she received from her father, she always remains the focus. We see how Kate sacrifices her dreams when they come into conflict with the value she places on her identity, and living in truth. And how she confronts her father, unflinching, with the reality of her dismissal from the military under the now thankfully antiquated policies of “Don’t Ask, Don’t Tell.” Jacob Kane’s acceptance of her daughter’s truth, and even more so the morality which compelled her to stand by it, is a best-case scenario for anyone who fears coming out. But it’s an important illustration that even when you feel like your world may shatter in contact with your truth, the people who care the most will stand by your side. 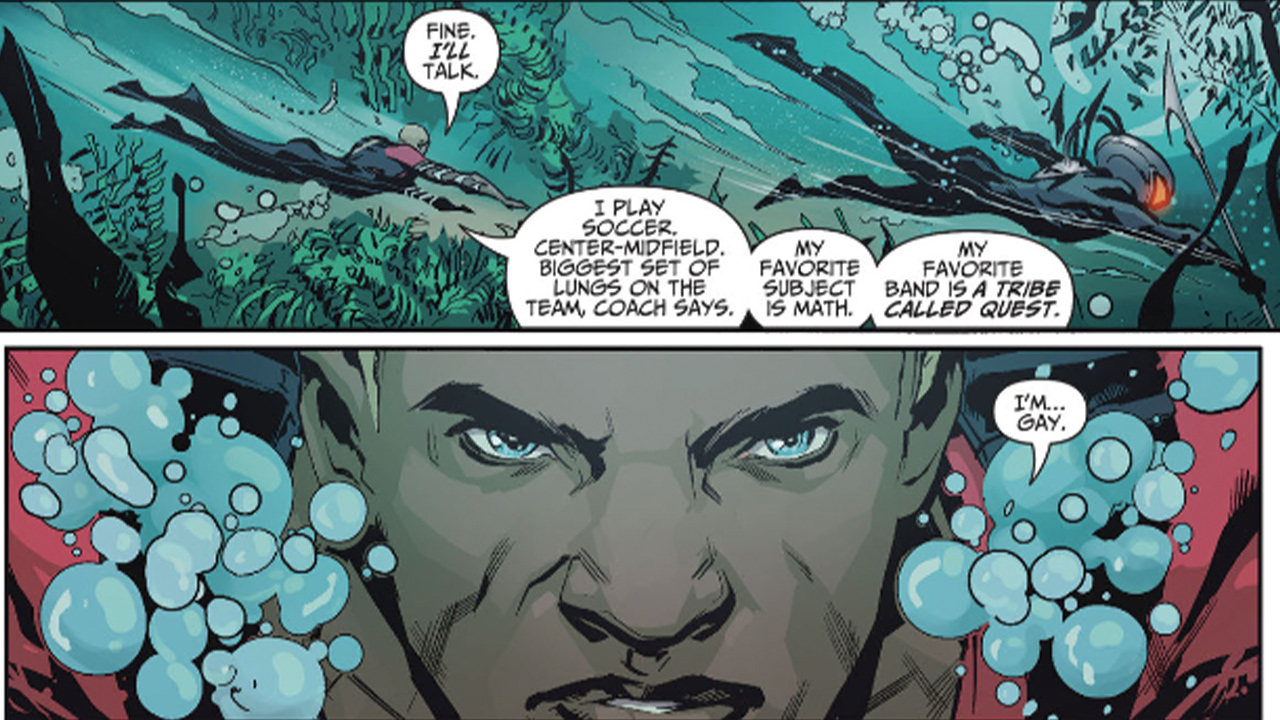 Jackson Hyde, the Aqualad of the Rebirth era, is a boy who spent his childhood sheltered from his identity. Sheltered from his Atlantean heritage, from his Super-Villain father, and from the opportunity for pride or acceptance in his feelings for other boys. Finding acceptance for his identity from the mother who raised him was a battle which took Jackson down a hard road… so, when getting to know his father, the reaction Jackson got from his Aquaman-hating father was downright comical in its indifference. While Manta accepts Jackson as his son, it couldn’t be more apparent that his sexual orientation couldn’t make the slightest amount of difference to him. A misanthrope through and through, who you love is never as important to Black Manta as who you hate. In a way, it’s a sort of relief to have your identity not be treated like it’s a big deal at all. The relationship is perhaps emblematic of a society where orientation and sexual identity are characteristics from which no prejudice can be derived at all; the very reality that we should all be striving to reach. But because sexual prejudice is still very much alive and prevalent, pride remains an important part of identity survival in counterbalance. 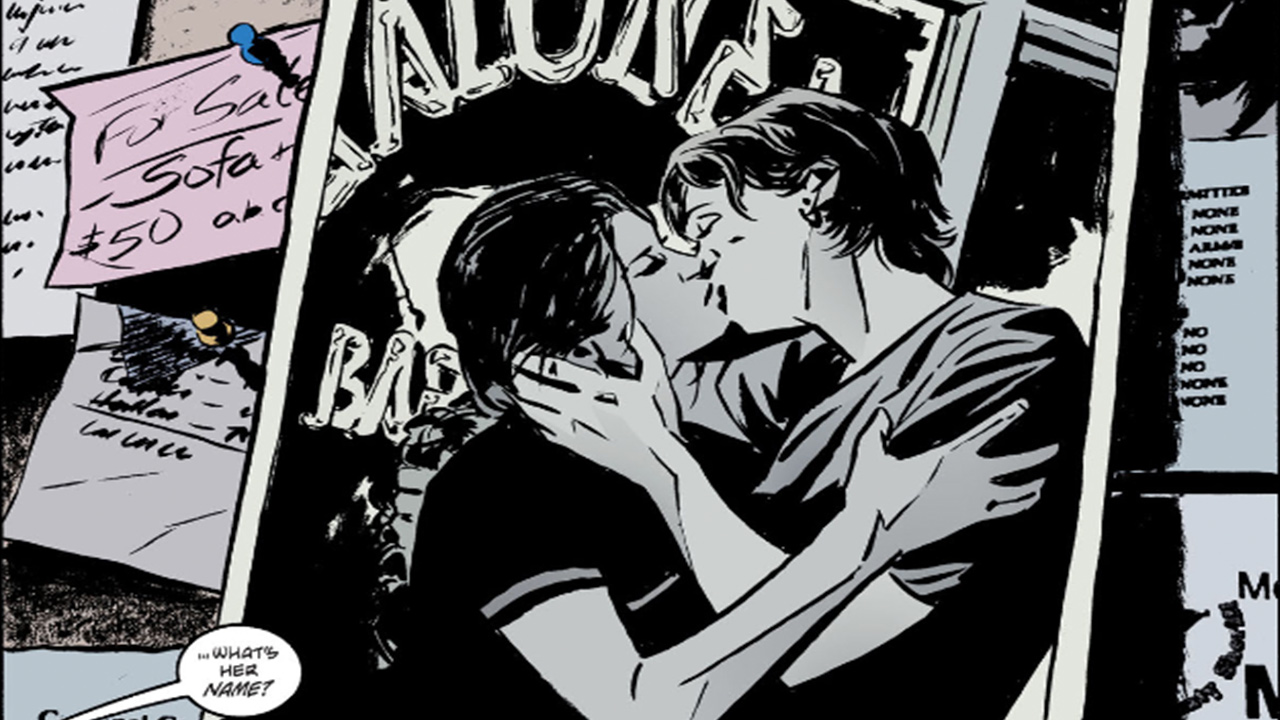 This Eisner-winning story by Greg Rucka is about the dark side of coming out -- especially when it’s not done on your own terms. In this often painful storyline, a vindictive Two-Face outs Renee as a lesbian before she is ready to become public with her identity, breaking her personal and professional life into shambles. This point cannot be stressed enough: while coming out is an act of bravery, outing someone else, under any circumstances, is a clear violation of a person’s space, identity, and privacy. Not only is it never acceptable, no matter your intentions, Rucka here makes the reality very clear: outing another person is, plain and simple, the act of a Super-Villain. If you suspect someone might be hiding their identity, or even if they privately confide it in you before telling others, it is your moral duty to keep that information to yourself. Coming out is always, ALWAYS a personal decision. Your role in another’s person coming out process is never to talk, but to listen. 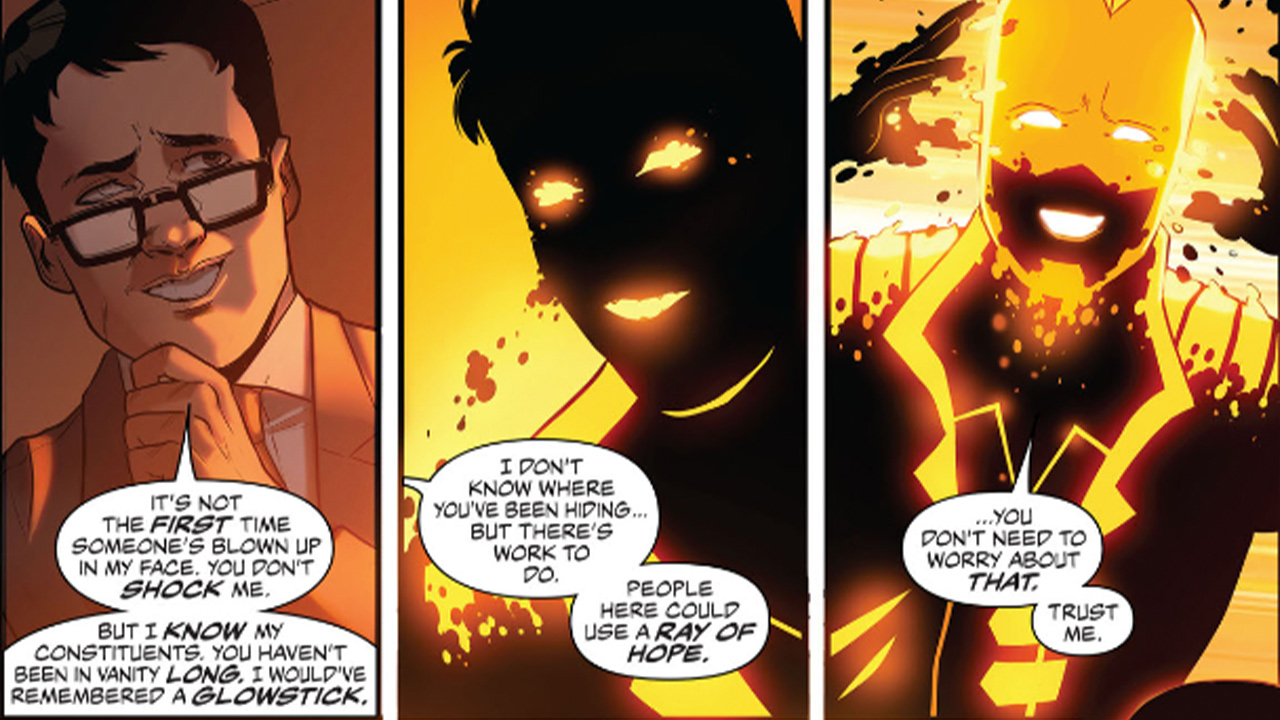 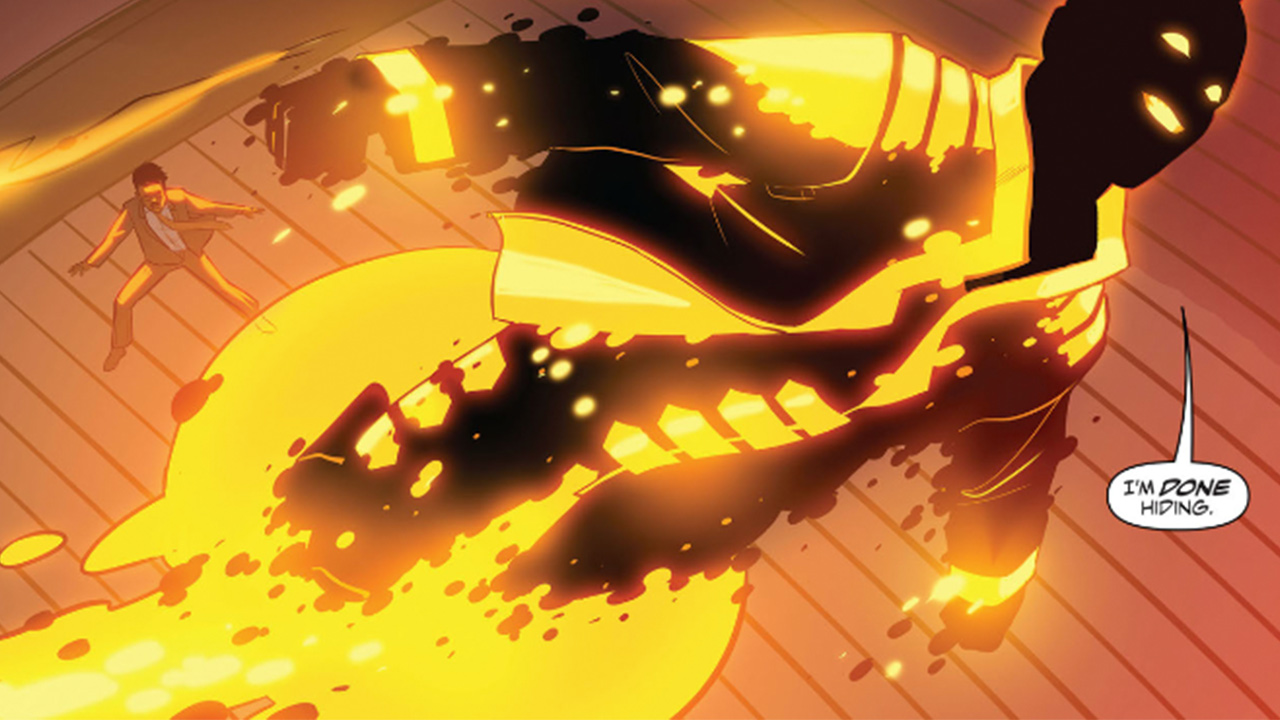 From the very beginning of the genre, the superhero story has always been about a dual identity. Living one life in public, and another in private. People keeping parts of their own identity secret as a tactic of social survival have empathized with the likes of Batman and Superman for decades, for this very reason. Steve Orlando, known well for the queer themes prevalent throughout his work, made this subtext overt in his 2017 origin story for The Ray. As a boy literally forced to live in the dark his entire life, it’s only when The Ray embraces the light which gives him his brilliant powers that he is also finally able to accept another part of his identity: his reality as a young gay man. Scary as it may be, life can be so much simpler, so much more joyful, after taking that step into the sun. After all, as Ray himself confides with the reader upon his luminescent debut: “Crazy how much easier it is to find a guy when you’re visible.”

Who are your identity icons? Share your pride in our Community!