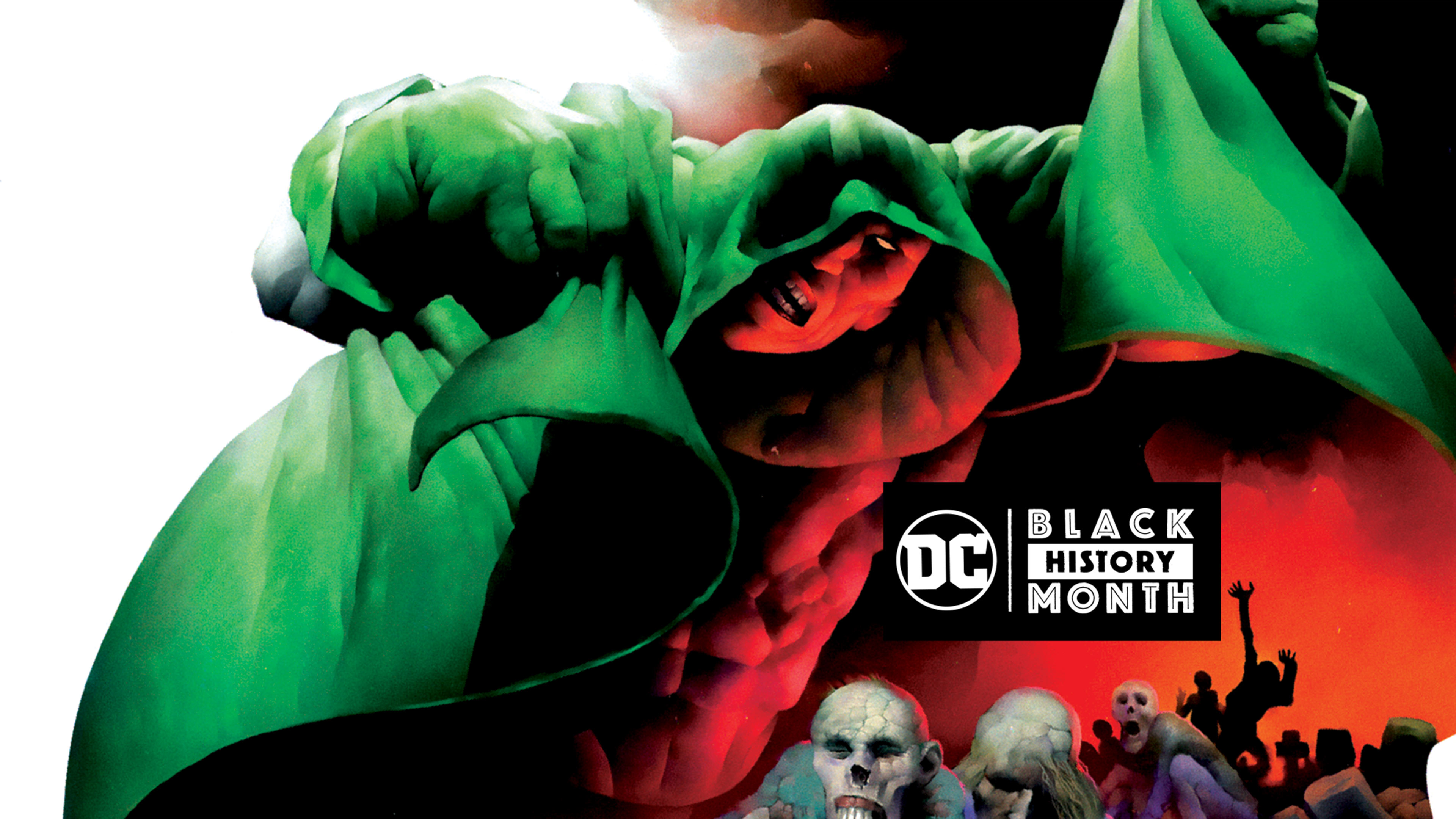 DC Universe’s celebration of Black History Month continues, and today we’re taking a look at Spectre #54, where Jim Corrigan meets a man we can only describe as terrific. You might know Mister Terrific as the inspiring superhero and genius, but things weren’t always so optimistic for Michael Holt. When readers were introduced to Michael in the opening pages of a story called “Atonement” he was at the end of his rope. A car accident had taken the life of his wife Paula, and Michael wasn’t sure if he could go on. 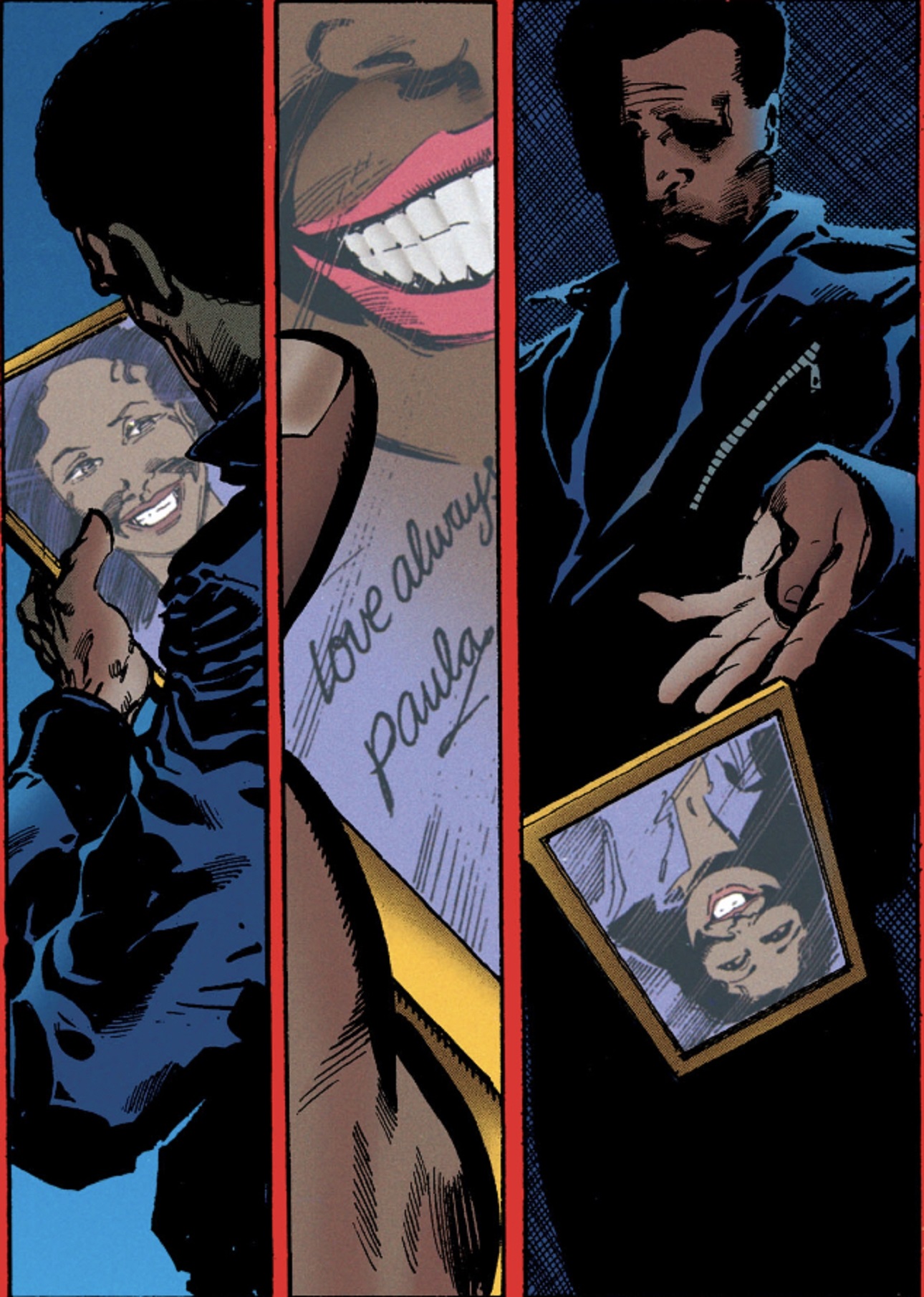 Tearfully, Michael Holt stood atop a bridge overlooking a railroad, and prepared to end his own life. He was interrupted by a group of young criminals, who threatened to kill him unless he surrendered his wallet. Michael didn’t care. He was ready to die, and it didn’t matter if it was by suicide or murder. The Spectre intervened, scaring the muggers off. To Holt’s credit, he didn’t seem all that phased by the appearance of the omnipotent cosmic being. The Spectre revealed that he was drawn by Holt’s thoughts, and wanted to talk to the lost soul. Corrigan said Holt’s plight reminded him of his old friend Terry Sloane, the original Mister Terrific. He told Michael about Terry’s death in Justice League of America #171-172. 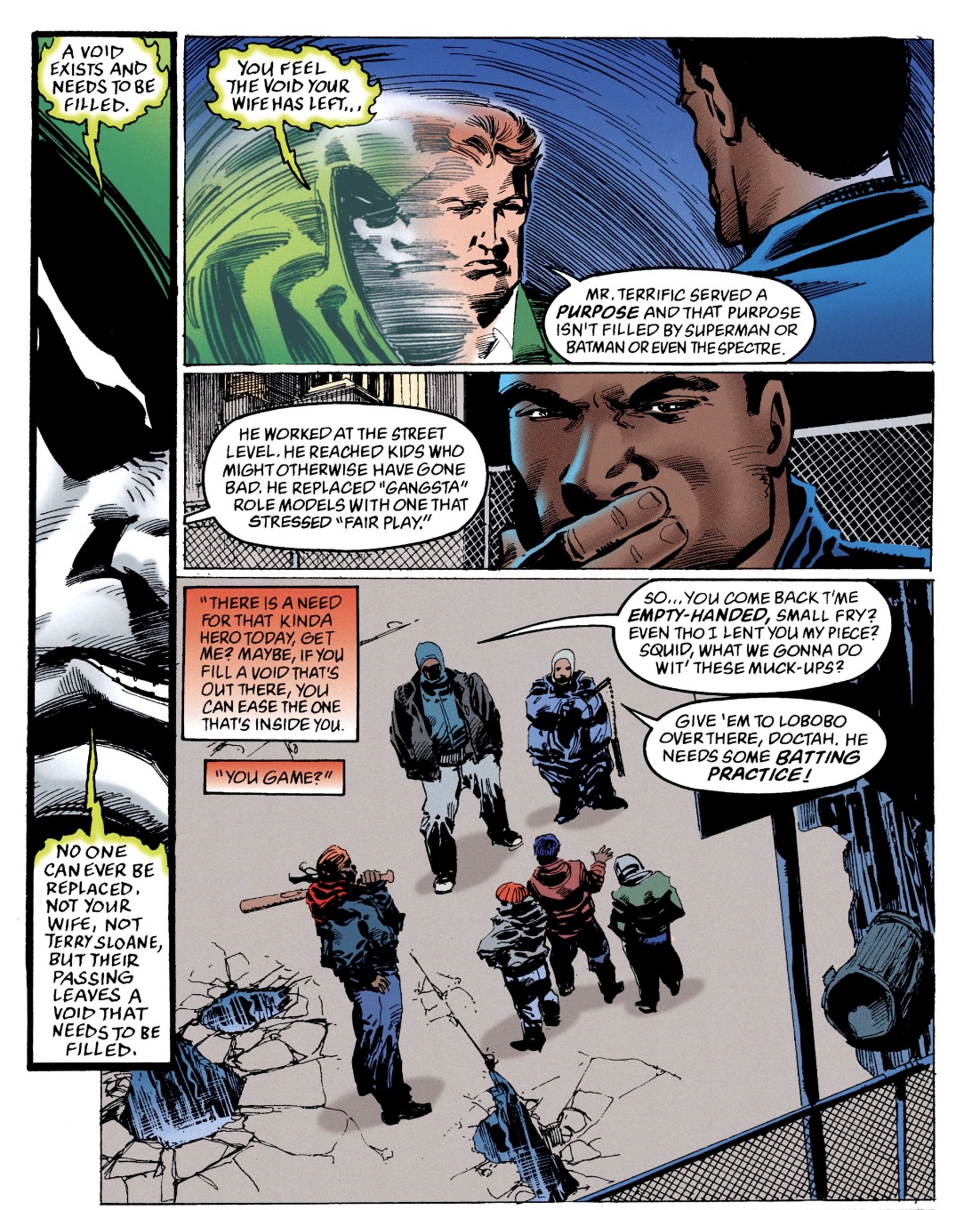 As the story concluded Michael wondered what the point was. Spectre explained that just as Paula’s death left a void in Michael’s life, Mister Terrific’s death left a void in the superhero community. The Justice League do their job well, but none of them embodied Sloane’s mantra of “Fair Play” or reached out to inspire and rehabilitate at risk street kids. Paula and Terry may never come back, but Michael can make a new beginning for himself and fill the voids they left. 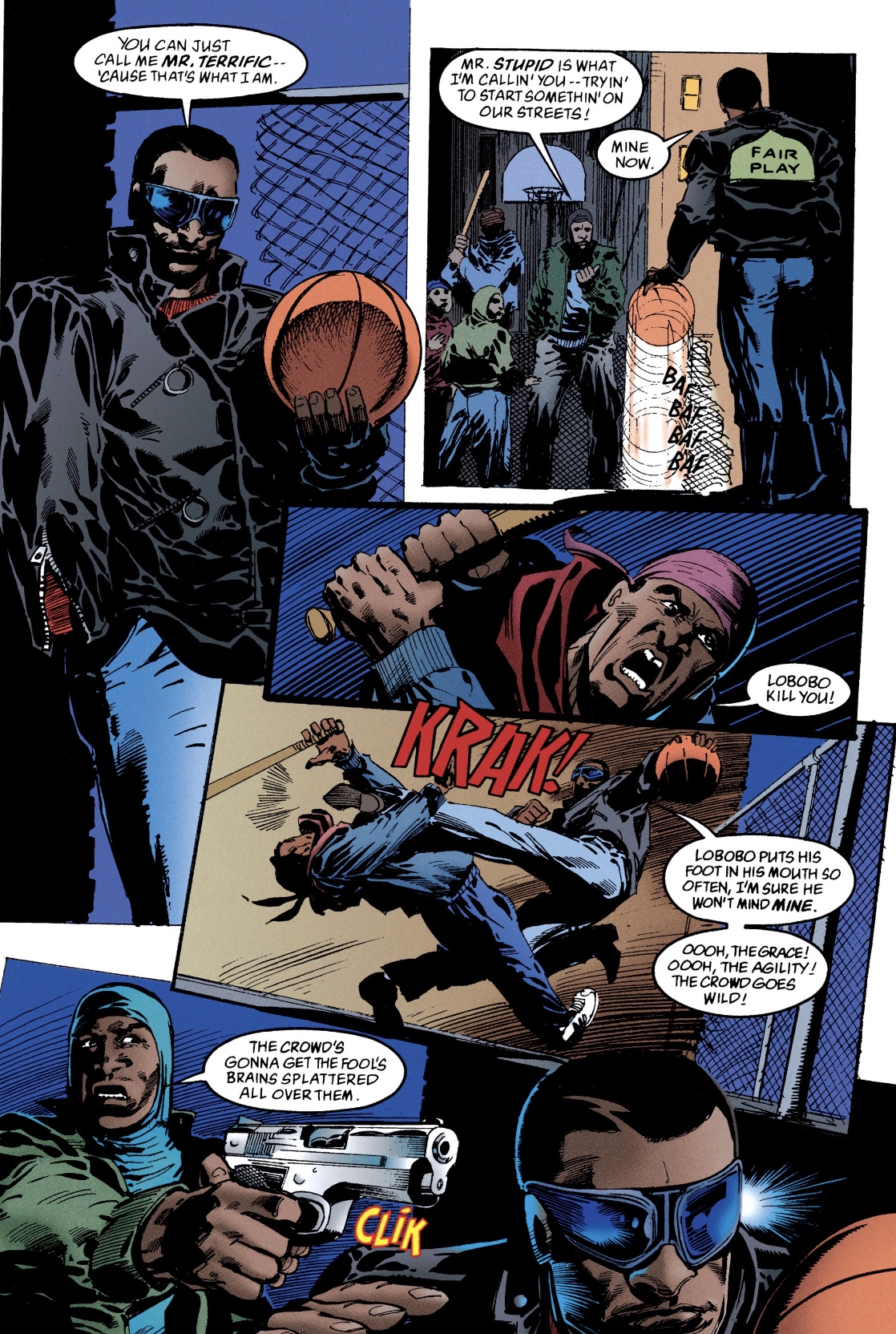 Inspired by the Spectre’s advice, Michael dons his own Mister Terrific outfit and shows up to a basketball court where the street gangs are meeting. He makes quick work of the gang leaders, which inspires the impressionable kids who serve them. When Spectre shows up to claim the souls of the criminals, Holt gets in his face. Holt tells Spectre their souls can still be redeemed since they haven’t killed yet, and he’s willing to bet his own soul on it. It is “Fair Play” after all. The Spectre agrees, leaving the criminals to Mister Terrific, who plans to turn their lives around. 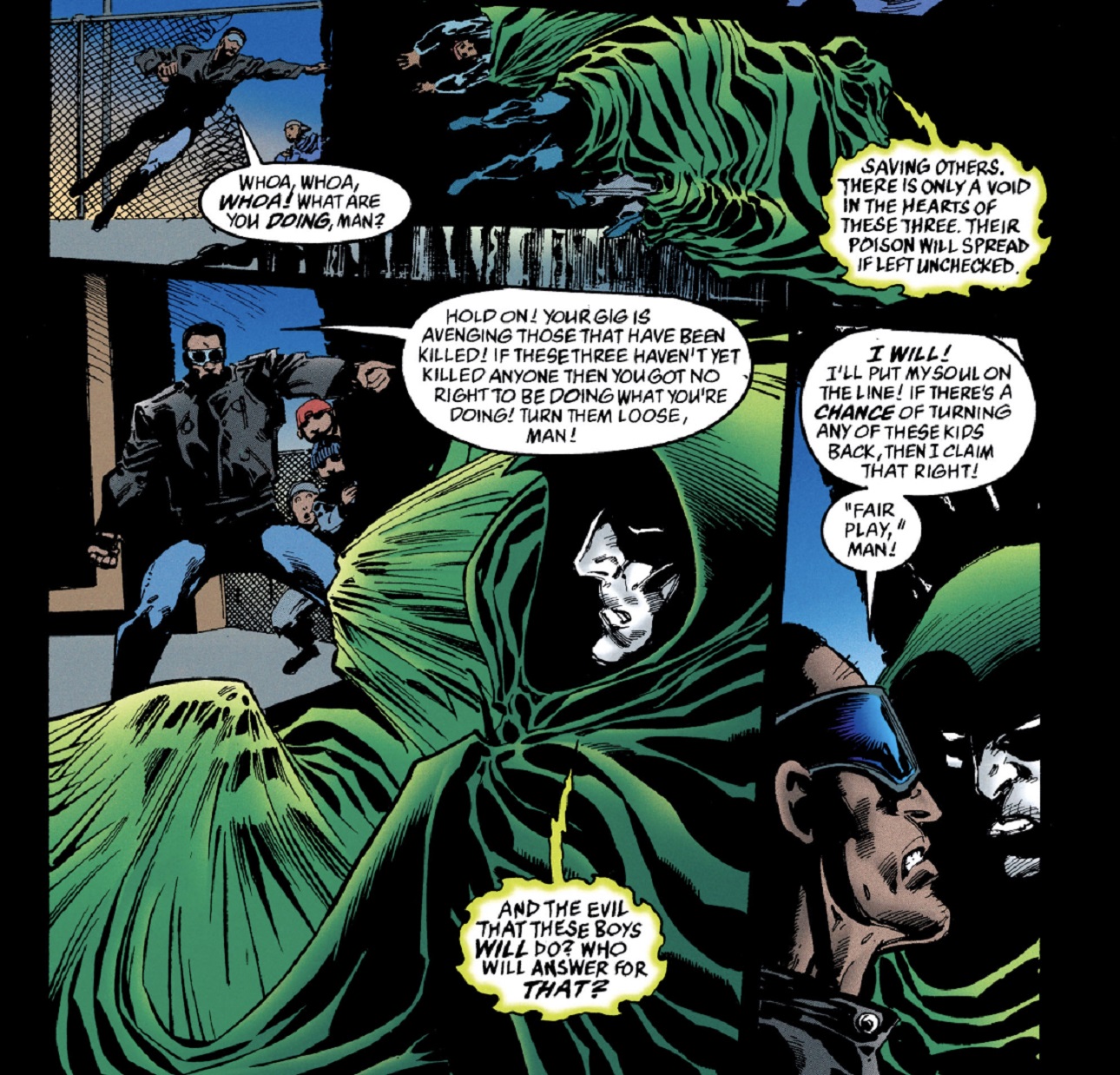 This story proves why Michael Holt is one of the greatest heroes of the DC Universe. He was willing to put his soul on the line to defend criminals who had tried to kill him panels earlier. The Spectre is one scary dude, but Mister Terrific was able to look him in the eyes and demand “Fair Play.” In a world full of dozens of heroes, this story proves why Mister Terrific needs to exist, and why the DC Universe is a better place for having him. 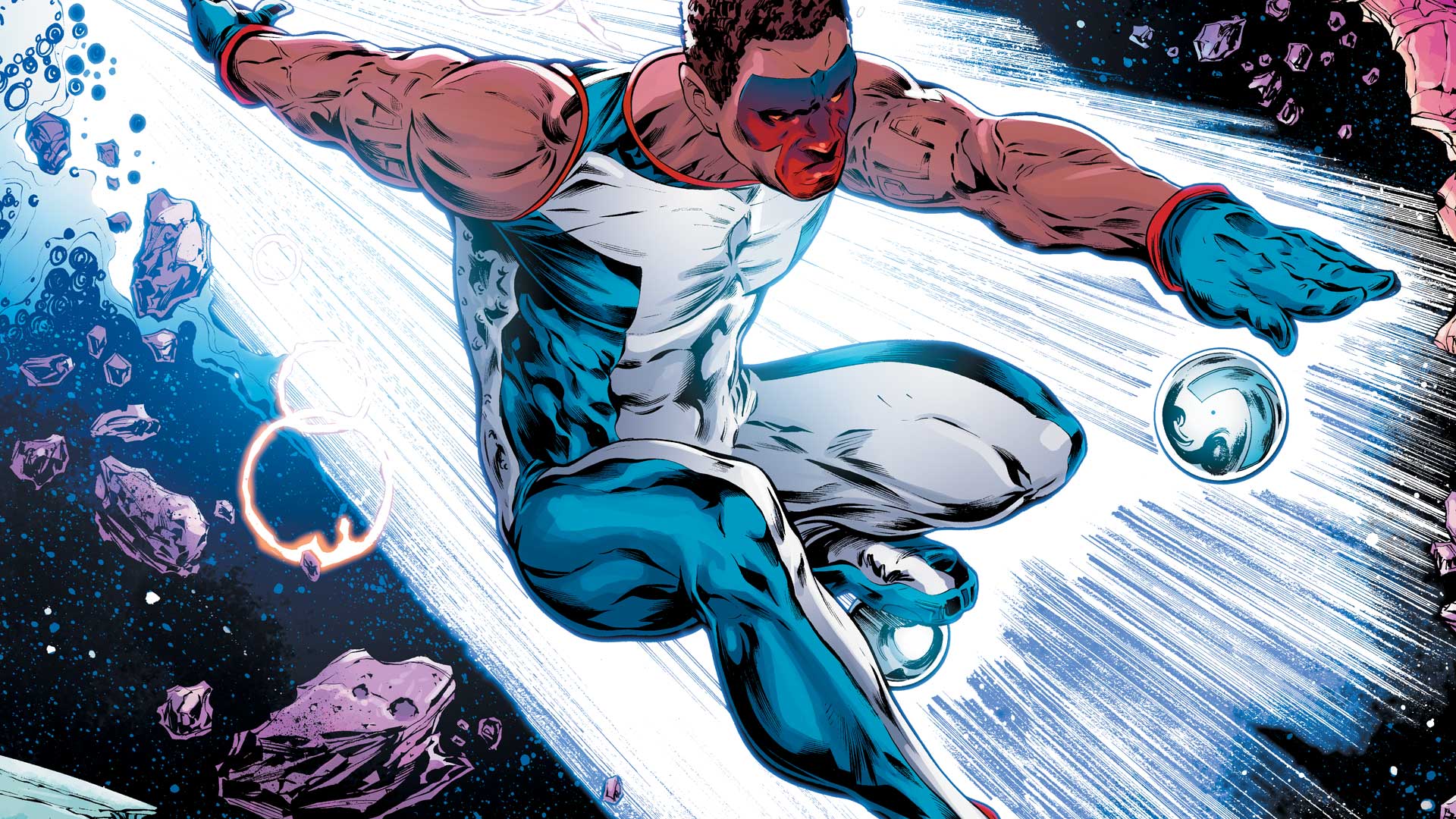 What’s your favorite Mr. Terrific moment? Let us know in our Community!