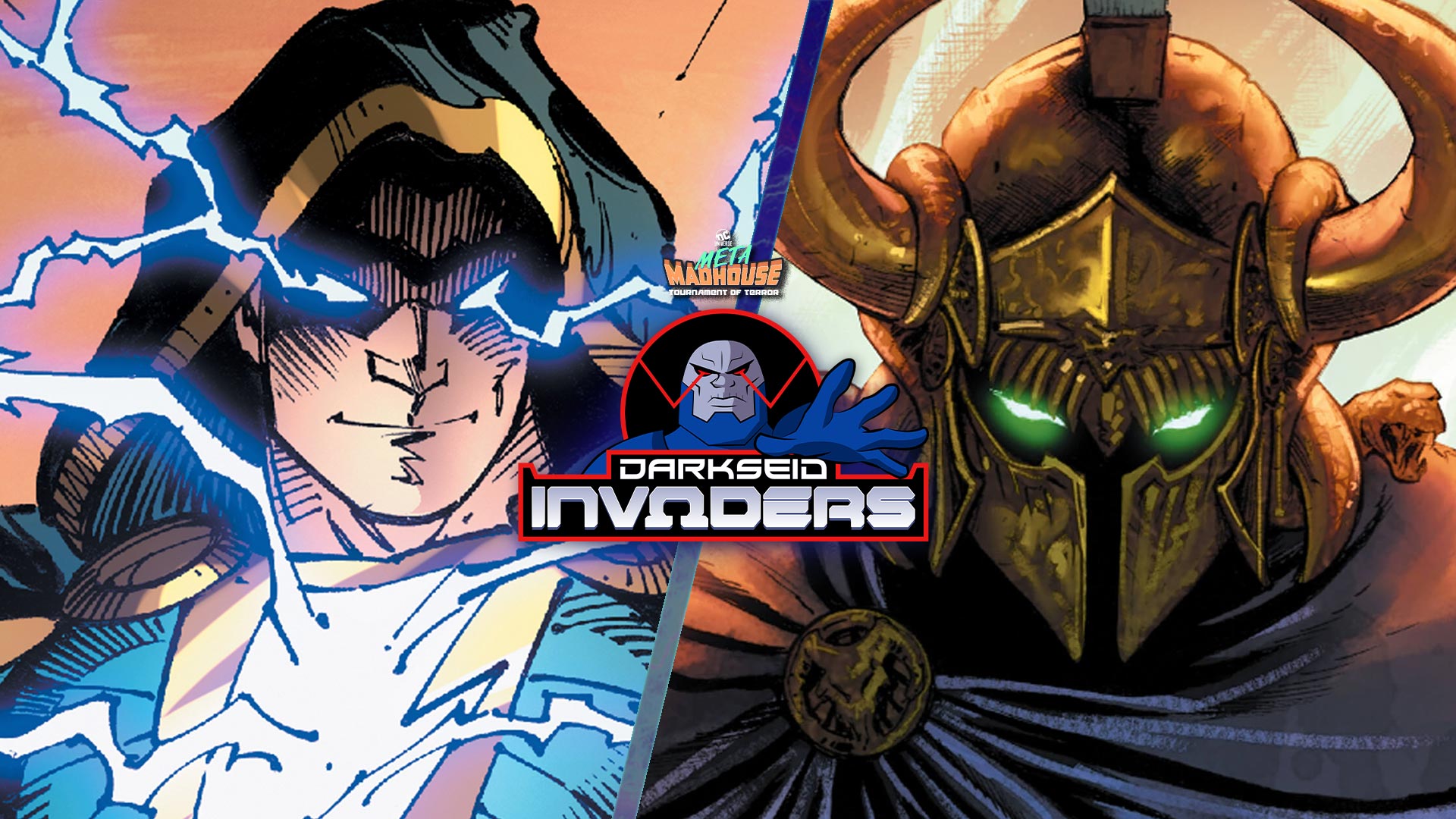 The moment that every Hunger Dog on Apokolips has been waiting for is finally here! For today is when the final two combatants of Darkseid’s chosen sixteen will prove themselves worthy of representing him in the Final Four. After a stunning Lazarus Pit Save mercilessly shattered a lot- I mean, seriously, a LOT- of your brackets, yesterday’s Darkseid Invaders semi-finals left us with two matches where either in their own right could fill a stadium: Black Adam versus Trigon, and Ares versus Sinestro. Even as your stalwart commentator and fight analyst broke down each battle, your votes for the outcome came in so close that we could only call these two right as the buzzer rang this morning. By a hair’s breadth, our finalists have been determined: Teth-Adam, the original champion of Shazam and wielder of immense arcane power; and Ares, Wonder Woman’s oldest foe and the ancient God of War itself.

All things considered, it’s rather fitting that these two stand as the potential representatives of Darkseid, the God of Evil. Black Adam channels the power of six gods. Ares, on the other hand, IS a god. Is the borrowed might of six equal to the presence of one? I’m Alex Jaffe- trivia master, investigative columnist, and “who would win in a fight” expert- and I’m here today to help puzzle this one out. Who will emerge victorious? Only the one who YOU determine would win in a fight between these legends of the DC Universe’s ancient history. (And not, say, based on who’s more popular, natch.) But before you cast your final vote for Darkseid's team of Invaders, read up on how each one may yet triumph...

THE DARKSEID INVADERS -- FINAL ROUND: BLACK ADAM VS. ARES

Okay, let’s cut the crap. To paraphrase a certain Frank the Plant, you gotta put your thesis statement at the &#$@in’ top: it’s Ares. Unless Black Adam can figure a way around the fact that he’s literally battling the God of War, then if all things fall as the data suggests, the winner of this fight is going to be Ares.

Why? Because Ares is the principle of combat itself. The reason Sinestro fell to him in the semi-finals is because Sinestro himself, whether he recognizes it or not, is one of Ares’ most devoted subjects. Every war that Sinestro wages across the universe only serves to increase his power. As it was with Sinestro, so it is with Sinestro’s BFF Black Adam. Black Adam is a man who proactively solves his problems through direct conflict; a man who challenges the entire planet when that which he loves is taken from him. In the history of the DC Universe, World War III itself was named for the globe spanning conflict between all the world’s heroes and villains, versus an enraged Black Adam. As much as that incident  proves Black Adam’s strength, it was also by its own definition a war: and therefore, simply a means of feeding the powers of Ares. 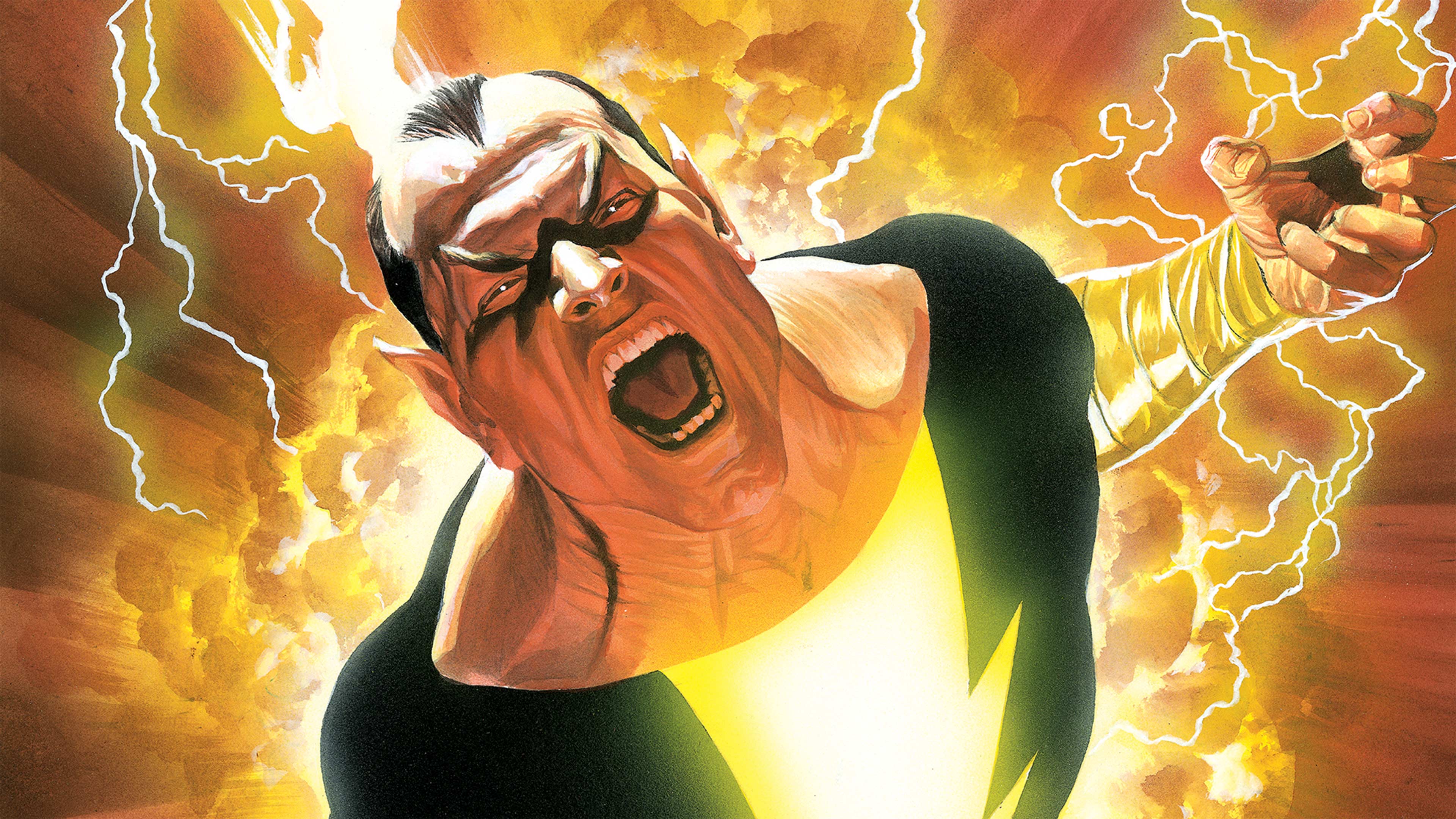 Black Adam’s patron gods may not be as well known today as the more familiar patrons of Billy Batson -- and that in fact may be a mark against him. It’s heavily established lore in the DC Universe that the more widely and deeply humanity recognizes a god’s powers are, the more power they have in the modern world. But that aside, the many battles between Black Adam and the boy Shazam have proven that they are roughly equivalent in scope of power. The amount of strength that Black Adam draws from Amon, therefore, may be considered roughly equivalent to that of Shazam’s patron Hercules. In Wonder Woman #126, Ares defeated Hercules himself in a single blow. Then, Ares went on to defeat Highfather HIMSELF in pitched combat. As in, Darkseid’s own greatest enemy. If Darkseid’s favor means anything in this competition—and as the Lazarus Pit Save has proven—that may in fact be the case- then the New God’s favor lies with the God of War. After all, this wouldn’t be the first time the two have worked as partners.

The only way to defeat Ares at all, as Wonder Woman knows, is with a cool head. The problem is that as the God of War, Ares always knows exactly what to say in order to rile someone up into a murderous fervor, and exploit that to his own ends. Unfortunately for Black Adam, thanks to World War III itself, that particular hot button is well known: the name of Adrianna Tomaz, the only hero who believed in him, the partner with whom he shared his world, and the woman who was so cruelly stricken down just as he had learned to love again. All Ares would have to do is invoke her name. The mere thought of her. The fact that she had been killed by the Four Horsemen of Death engineered by the scientists of Oolong Island, who had been themselves commissioned through a number of shell organizations leading all the way back… to Darkseid himself.

With that seedling of revelation alone, all the forethought and wisdom which allowed Black Adam to defeat the Anti-Monitor would be gone. All the careful ritual practice which afforded him the ability to banish Trigon would be forgotten. All that would be left in Black Adam would be the sheer, soul quaking rage which has brought an entire world of heroes low… and one which would deliver Ares enough power to rival even the almighty Darkseid.

Shazam aside, Black Adam may still yet be Earth’s mightiest mortal. But he is still just that: a mortal. Like the Super-Villain for which this bracket bears its name, Ares is a god. And this is not the day that old gods die.

Who is YOUR choice to win Darkseid's bracket of Invaders? Vote now and talk about your choice in our Community!