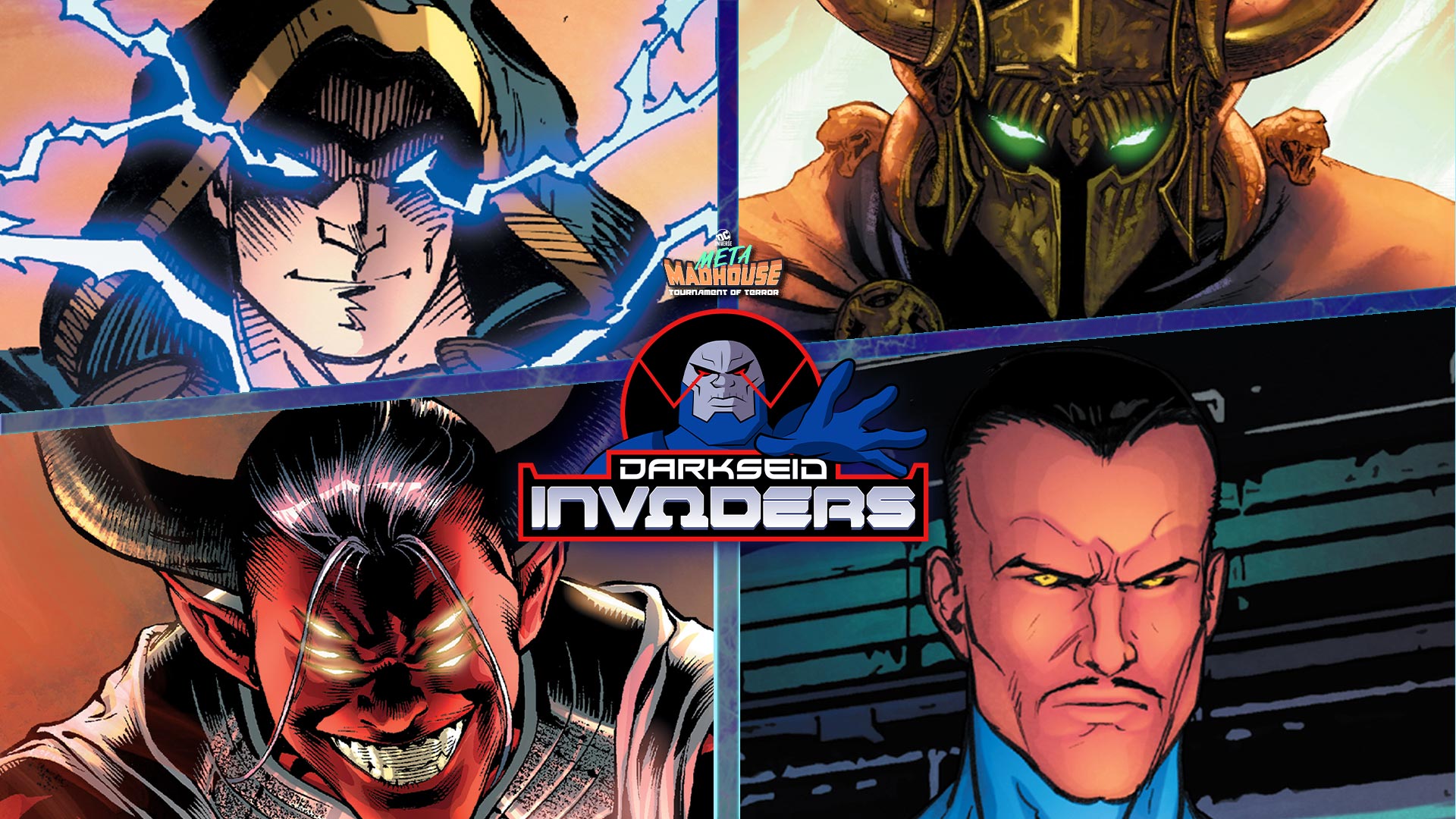 Who’s ready for some Madness? Welcome back to Meta Madhouse: Tournament of Terror, where the biggest bads battle for the ultimate bragging rights! I’m your professional commentator, Alex Jaffe -- DC Universe’s own trivia master, investigative columnist, and “who would win in a fight” expert. As each and every fighter in this year’s competition steps into the arena, I’ve been providing my own analysis on the likely winner of each competition. Of course, the final results aren’t up to me, but YOU, my DC Universals. Each outcome of these pulse-pounding contests of super-powered pugilism is determined solely by the number of votes the fighters receive, allowing the winners to move onto the next bracket!

Except, y’know, when it isn’t. Such is the case for only FOUR of the many, many matches on display at this month’s Meta Madhouse, where a “Lazarus Pit Save” granted by a DC Universe professional allows one fighter to overcome their democratically decided fate one time, and advance despite the popular decision. (And mind you, when we say “popular decision,” we mean “the popular choice for who would win a fight between these characters in this scenario,” not "who is the more popular character," which is not what this competition is about. But I digress.)

But today’s Semi-Finals of the Darkseid Invaders bracket features a match-up which can only be the result of one of those tide turning Lazarus Pit Saves, defeating competition favorite the Anti-Monitor in his bout with Black Adam! With the heaviest of hitters out of the race, this may be anybody’s game! Let’s take a look at the four fighters still standing, as they face off against one another for your amusement. (But possibly, mostly, for Darkseid.) Educate yourself and then vote accordingly!

ROUND ONE: BLACK ADAM VS. TRIGON

Black Adam has already accomplished the impossible in this tournament: he has single handedly defeated the Anti-Monitor, one of the most powerful beings in the entire history of creation. He accomplished this task not through sheer power- that would truly be impossible- but through meticulous planning and deep cunning afforded to him by the mystical wisdom of Zehuti.

As was made clear in the last match-up against the notorious Superman-killer Doomsday, the transdimensional super-demon Trigon can’t be defeated by any opponent if you don’t come at him with some potent magic behind you. If Black Adam came prepared to deal with the Anti-Monitor, there’s no way he wasn’t also equipped with the necessary arcane rituals to dismiss Trigon from this mortal plane. Maybe that’s not such an easy thing to look up, even with access to the Rock of Eternity. But the wisdom of Zehuti hasn’t steered him wrong yet. Not to mention, thanks to the power of Aton, the deep reserves of magic power required to back up such a potent spell. It won’t be as easy a banishment as it would be for someone like Raven, who has a direct connection to Trigon. Trigon is pretty much as powerful as demons come, no matter what dimension you’re talking about. But as Shazam’s original chosen champion, Black Adam has been battling powerful demons for his entire career. They’re the first class of enemy he learned to fight. Trigon’s a tough one, but Black Adam’s already taken down tougher.

ROUND TWO: ARES VS. SINESTRO

Sinestro has fought well in this competition so far. He’s taken Lady Bleez, one of the most capable and furious Red Lanterns, and Mongul, champion of War World and one time leader of his own Sinestro Corps. But that’s all over now. Sinestro’s greatest claim to infamy is his never-ending war campaigns against the Guardians of the Universe who rejected his extreme ideas. As the God of War itself, all of Sinestro’s efforts have only served to energize Ares, and bring him new life. I mean, the most notable story in Sinestro’s history is called “The Sinestro Corps WAR”. If he’s not paying tribute to the altar of Ares through his intergalactic military efforts, then I don’t know who is. In this fight, one imagines the prideful, proactive Thaal Sinestro as relentless in his pursuit of Ares. And just as Starro learned too late in the Quarter-Finals, a head on offensive tactic is exactly what Ares wants from his enemies.

Then again, Sinestro has displayed a greater head for strategy than Ares’ opponents thus far. Athena, too, is a war god, but one of wars fought with intelligence, rather than raw power. Sinestro is smart enough to have taken notes from Ares’ previous battles, and learned from the mistakes of the fallen. After all, snatching victory from the jaws of certain defeat is what a Green Lantern does. And that may be in the past for Sinestro, but he still remembers how the job is done. But does he have it in him to channel Ares’ long time rival in the pantheon, and keep his malicious intent for battle from powering his divine opponent? Probably not intentionally. Sinestro never had to take a Greek history class. And as long as we’re talking Greek, let’s not forget: Ares’ own son, Phobos, is the god of fear itself. As a man whose entire power set is derived from fear, Sinestro may simply be outranked here.

Which villains are you voting for to reach the Invaders' championship? Let us know in our Community!