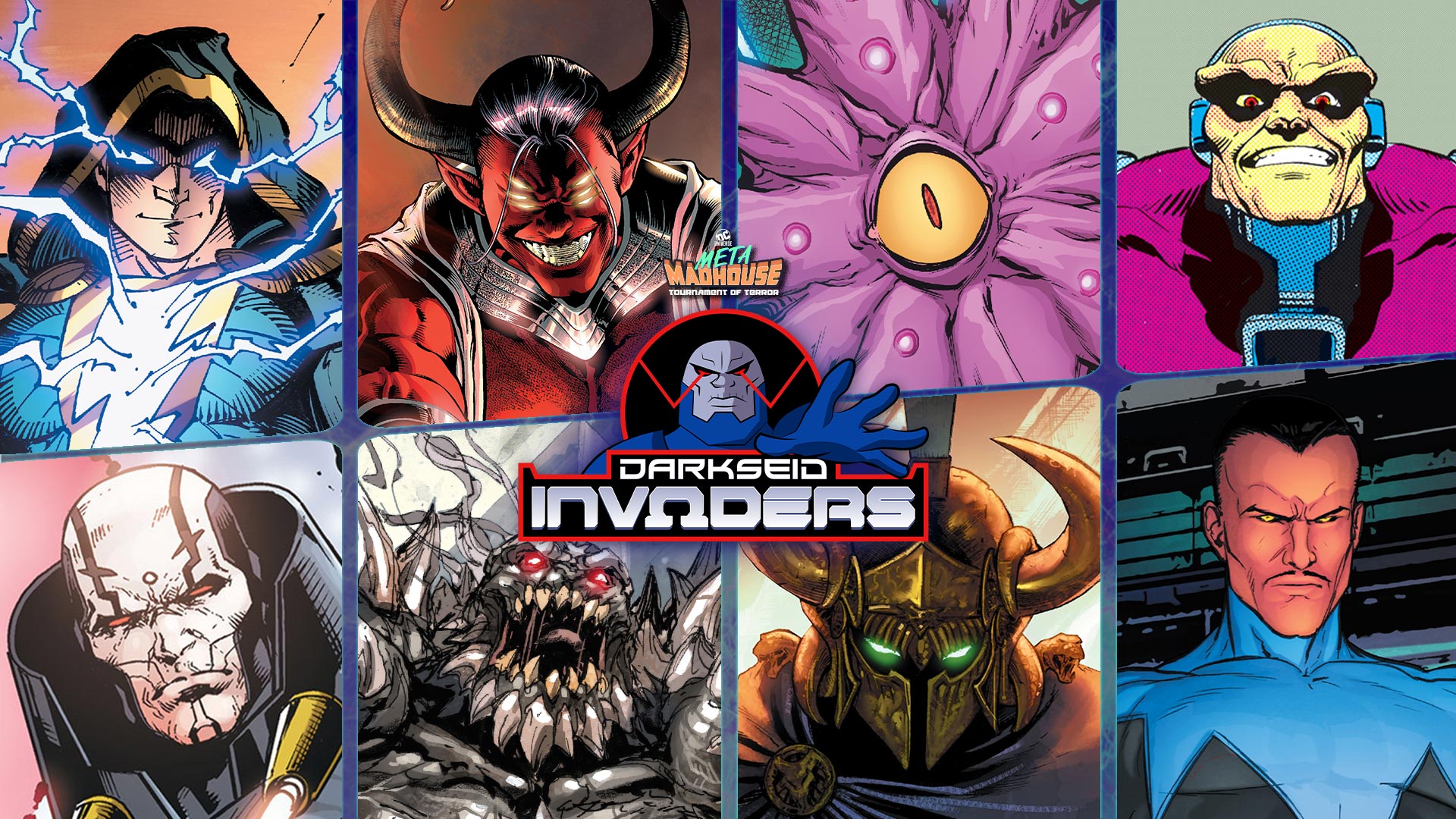 The dawn of our sixth day of Meta Madhouse bracket battles has arisen, and the arena floor is slick with the blood of gods and monsters. DC Universe spent all weekend long voting on which of The Darkseid Invaders would reign over their formidable opponents, and Darkseid Is… pleased with the outcome. Just as it is so on the blighted surface of Apokolips, here in Meta Madhouse, the weak must be culled for the strong to thrive. Today, where once sixteen champions of Darkseid stood, eight now remain. But which of these world class Super-Villains will rise again to face the challenge of Darkseid’s semi-finals? The answer (one which, we remind you as a mere courtesy, is about who would win in a fight, and not which character you'd rather hang with or whatever) is in your hands.

We know what you’re thinking: that’s an enormous responsibility to put on you, a mere observer to the fantastic. This is precisely why DC Universe has provided a professional point of view on each of these battles to aid you in these critical decisions. I’m Alex Jaffe- Trivia Master, investigative columnist, and “who would win in a fight” expert, and I’ve returned once more for another week of Meta Madhouse commentary on all the angles you should consider before you vote to choose your villainous champions. What are we waiting for, the Anti-Life Equation? Let’s get to it.

(PLEASE NOTE: This year, there’s a special rule in play for the Meta Madhouse competition where one fighter from each bracket has been secretly awarded a “Lazarus Pit Save” by a DC professional, allowing them to reverse the popular vote against them in one single fight. Because that secret “Lazarus Pit Saved” character remains in play, the minimum odds for any character moving on is at least 12.5%.)

ROUND ONE: BLACK ADAM VS. THE ANTI-MONITOR

First of all, let’s pay our due respects: Black Adam happens to be one of the most powerful metahumans in the universe. His handy victory over General Zod proved this: even a militarized version of Superman, our greatest champion, stands no chance on his own against Earth’s original Mightiest Mortal. At the zenith of his fury, Black Adam shook the planet with a rage so formidable that the entire planet had no choice to unite against him. They called it World War III, and it was just Black Adam versus everyone else. And he nearly won. He has the power of gods, and the divine wisdom to use that power for maximum strategic effect. Without question, Black Adam is one of the most powerful entrants in this year’s competition.

But then… then, you have The Anti-Monitor. Forget world wars, the Anti-Monitor destroyed the entire multiverse. Black Adam may have powerful magic at his fingertips, but the combined magical powers of every hero in the universe manifested within The Spectre wasn’t enough to stagger this beyond cosmic villain. It was only through the combined efforts of two Supermen, a Luthor, and Darkseid HIMSELF that the Anti-Monitor was ultimately subdued! Think about that: Darkseid was considered too powerful, too prominent to be in this competition himself. And yet, the villain that he needed help taking down is here. Without the wisdom of Zehuti, it’s difficult for me to imagine any scenario where Black Adam manages to come out of this one looking any better than Supergirl or The Flash.

ROUND TWO: TRIGON VS. DOOMSDAY

When Trigon appears on Earth, usually because of something terrible involving his daughter Raven, it’s always a dire situation. But not an insurmountable one: through either Raven herself or a confluence of skillfully deployed magical forces, the otherwise all-powerful Trigon can be banished back to the hellish dimension from whence he came.

Well. Last I checked, Doomsday is a pret-ty tough cookie, but he ain’t magic. Sorry Doomsday, this might be your...well, y'know...

ROUND THREE: STARRO VS. ARES

After an unexpected victory over the taciturn Granny Goodness, some might say that this is the mind controlling and world invading Starro the Conqueror’s competition to lose. Here’s a villain whose presence was so threatening, that he prompted the Justice League of America itself to unite in order to oppose him. But ol’ Starro’s never had to contend with a god before- much less a God of War. Fresh from his own upset against the Witch Goddess Hecate (seems the female contingent of Darkseid’s furies isn’t doing so hot overall), Ares knows a thing or two about influencing minds. After all, he’s been guiding and goading mankind into wars for millennia, each of which only serves to bolster his power.

Unless Starro happens to be some kind of mind reader or something, it’s going to be difficult for him to learn the trick to defeating this god: that every attack you launch at him only increases his power, for he is a deific representation of conflict itself. As Wonder Woman knows, the only definitive way to handle Ares is to lay down your arms (at least five of them, in Starro’s case), and force him to meet you on peaceful terms. To approach him with love and compassion, not fury. But Starro is a creature who knows not of these things. His drive to conquer and consume will be the very thing which delivers Ares his victory.

Now: if this were Jarro… Ares might be in trouble.

ROUND FOUR: MONGUL VS. SINESTRO

You know what “who would win in a fight” debaters love the most? Something we treasure more than any other statistic or metric? DIRECT. PRECEDENT. Mmm, feels good just saying it. A lot of people see Mongul as the biggest bully on the intergalactic playground, because that’s exactly the reputation he’s spent so long cultivating for himself. Mongul doesn’t take challenges to his authority or supremacy lightly, and will always be quick to bludgeon his way to the top of any organization which includes him. So it was with the Sinestro Corps. When Sinestro himself was no longer available to lead his carefully constructed cosmic militia, it was Mongul who took charge in his stead. Upon Sinestro’s return, the two resolved this chain of command issue in the only way we truly recognize here in Meta Madhouse: by rite of combat.

Mongul fought hard, and well, but it was Sinestro’s might which ultimately won the day. You can check the receipts for yourself in 2009’s Green Lantern #46. And while Mongul never goes down easy, Sinestro has only gotten more powerful in the past decade, as he’s now mastered the ultraviolet light of self-destruction. This fight will not be over fast, and Sinestro is bound to take a beating. But history has already given us our winner.

Vote now in today's matchups and then talk about your choices in our Community!