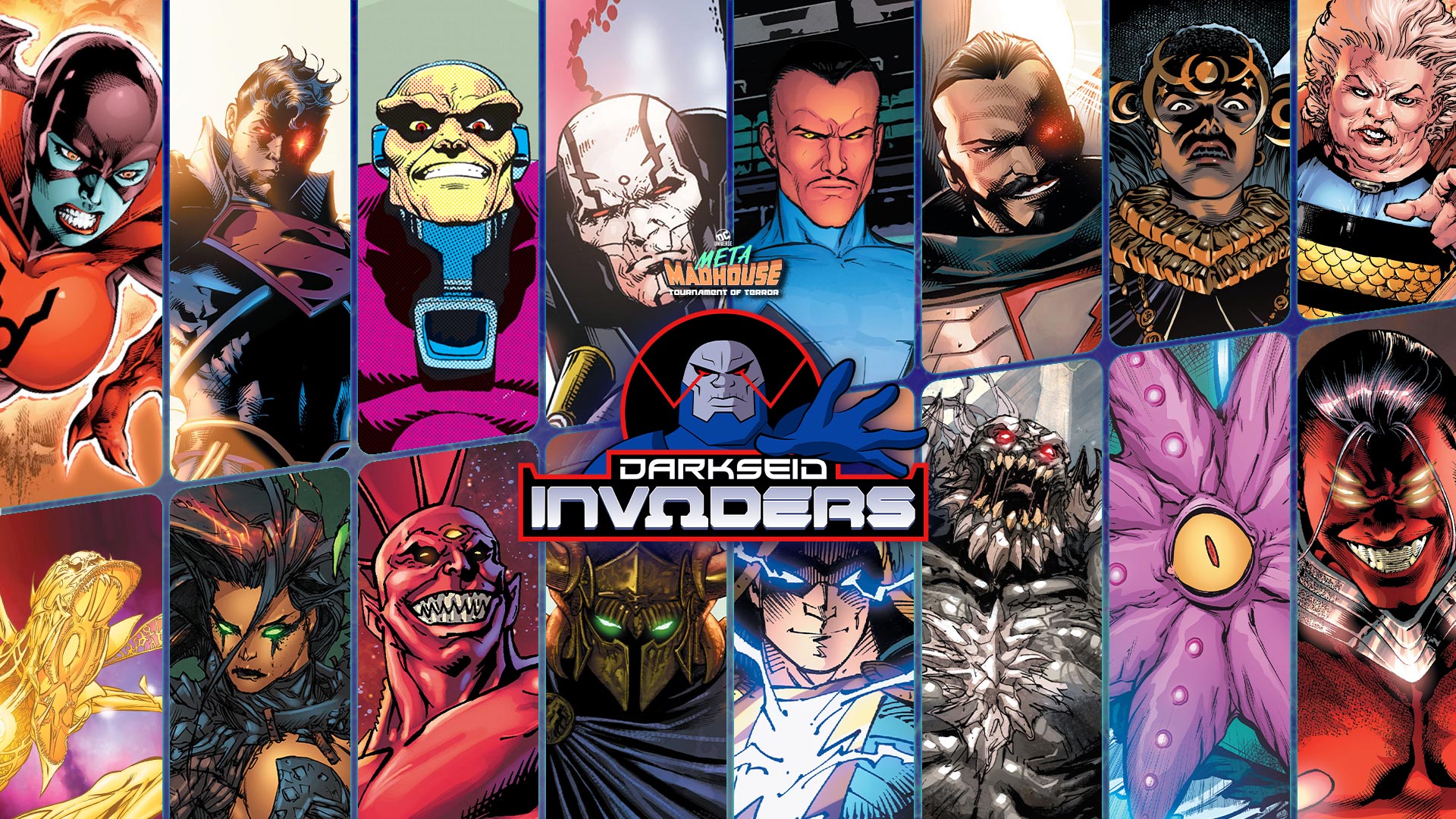 The results are in, and Reverse-Flash has been crowned the champion of the Joker Maniacs in this year’s Meta Madhouse: Tournament of Terror! But as the terror of the 25th century awaits his fate in the winner’s circle, three teams must still determine champions of their own. Our attention turns next to The Darkseid Invaders: a cadre of planetary conquerors and Justice League level threats! Hold onto your seats, because this is where the real heavyweight matches start to go down. Powerful as they may be, the ultimate power for who goes on and who goes home lies in YOUR hands, as you vote on every match-up for the remainder of this competition!

But there’s another type of power in play: I speak, of course, of the power of knowledge. I’m Alex Jaffe, trivia master, investigative columnist, and “who would win in a fight” expert, and I remain at your disposal to analyze every single match-up in this year’s Meta Madhouse competition and lay down odds for your consideration. To do this, we’ll be considering powers, abilities, experience, psychology, and NOT POPULARITY, IN ANY SHAPE OR FORM. Because, as we all know, this is about who would win in a fight.

Okay. With that clear, let’s take a look at all eight of the exciting match-ups we’ve got planned for today's cosmic-level match-ups!

(IMPORTANT NOTE: One of these fighters has secretly been awarded a “Lazarus Pit Save,” allowing them to reverse the results of one fight where the votes come out against them. Because of this, every fighter at this stage has at least a 6.25% chance of winning.)

ROUND ONE: BLACK ADAM VS. GENERAL ZOD

If you’re only going to watch one match today, make it this one. Black Adam and General Zod both represent versions of their heroic counterparts- Shazam and Superman- with complete confidence and valuable experience in the field of merciless combat. If you’ve ever wanted to see the Big Cheese and Big Blue go all out against each other, this may be the closest you’ll ever get.

Superman has fought Black Adam before, but has usually relied on Shazam’s help to get the job done. After all, Black Adam’s powers are based in magic: a force that Kryptonians don’t typically have much defense against. General Zod may be more martially experienced than Superman, but he also has less practical experience using his Kryptonian abilities under a yellow sun -- and, most crucially, less experience when it comes to facing magical opponents. It’s gonna be one hell of a fight, but if both fighters enter at the top of their game, victory is all but assured for Shazam’s first champion.

ROUND TWO: PARALLAX VS. ANTI-MONITOR

This fight is probably best viewed remotely. You don’t want to be anywhere near these cosmic entities when the yellow light and antimatter shadow demons start to fly. As the embodiment of fear itself, Parallax is one of the most powerful beings in the known universe -- an entity of pure energy which no mere mortal opponent could ever hope to vanquish alone.

Unfortunately for Parallax, however, its opponent in this competition is no mere mortal. Parallax may be an integral force in the architecture of the universe itself. But the Anti-Monitor LITERALLY eats entire universes for breakfast, fear-based photons and all. It’s also worth noting that in Blackest Night, a direct correlation between the two was made: the undead Anti-Monitor was revealed as the power battery for the entire Black Lantern Corps, while Parallax powered the Sinestro Corps -- who, alone, were way outclassed by the undead horde. But who knows? Perhaps there’s something out there in the vast Dark Multiverse that even the Anti-Monitor fears. And if that’s so, Parallax may have a chance… slim though it may be.

ROUND THREE: TRIGON VS. BLACKFIRE

Trigon is a demonic entity of incredible power from a hellish dimension with designs on making all of reality his dominion. His appearances are by necessity an all hands on deck situation for the Teen Titans and it’s typically only through his daughter Raven that they manage to keep his claws from sinking into their universe for a while. So, let’s do a little math: Blackfire, queen of Tamaran, is more or less as powerful as her sister, Starfire, with pretty much equal combat experience and ability. Starfire is one unit of the Teen Titans -- a team which typically requires all of its members to take on the threat of Trigon. This is all to say that the numbers do not look good for Queen Komand’r.

The one thing she has that Starfire doesn’t, however, is her cunning, and skill for diplomacy. If Blackfire has a way ahead, it may be by brokering a deal with Trigon which would allow her to proceed. Such tactics are absolutely against the Meta Madhouse rules, of course. But hey, these are Super-Villains we’re talking about.

ROUND FOUR: SUPERBOY-PRIME VS. DOOMSDAY

I hope you’ve reset your watches accordingly for Daylight Savings, because it’s PRIME TIME, BABY! Everyone knows how Superman’s most famous fight, the battle against Doomsday, originally went down. Like John Henry taking on the steam drill, Superman expended every last ounce of energy in his yellow sun irradiated body to take down this intergalactic superweapon on legs, and shortly died thereafter. (Or nearly died, depending who you ask.) So we know that a Superman analogue CAN beat Doomsday, though it takes everything they’ve got.

But with that in mind, I don’t see this as another Double K.O. During Infinite Crisis, Superboy-Prime held his own against MULTIPLE incarnations of Superman. He shows none of Superman’s typical restraint in the use of his powers, nor any regard for the civilians or property which surrounds him. In a battle between Doomsday and a kid with Superman’s powers and no sense of decorum, the kid has the distinct advantage. The only real trump card Doomsday has to play is this… and honestly, it’s a big one. True, Doomsday HAS been beaten by Superman before. But what makes Doomsday so formidable is that he can never be beaten the same way twice.

ROUND FIVE: GRANNY GOODNESS VS. STARRO

Starro the Conqueror is an intergalactic parasitic force of evil who brings whole worlds under his tentacular arms by attaching starfish-like spores to their populace. Granny Goodness, torturer extraordinaire and headmistress of Darkseid’s Female Furies, is just plain mean. There are people on Apokolips who fear Granny’s sugar-coated fury even more than the displeasure of Darkseid himself. Many even consider her to be the closest thing Darkseid has to a second in command.

Granny Goodness has no particularly special powers, apart from the typical physiology of a New God. She has no special tricks or attacks. What she does have, though, is the most terrifying mind in imagination. One solely dedicated to flaying the bodies and souls of everyone she meets in a way that will ruin them forever. All I’m saying is: if Starro even tries to get inside that head of hers, he’s gonna forfeit this whole thing right quick.

ROUND SIX: HECATE VS. ARES

A battle of the gods! Just imagine: thousands of years ago, citizens of ancient Greece were probably asking “who would win in a fight” questions just like this one. And then, they’d go and base whole religions around the verdict. Ares is the God of War, which sounds pretty good when you’re looking for a Fightin’ God. He’s one of Wonder Woman’s most persistent enemies for a reason. But though he may be a capable warrior in his own divine right, Ares typically relies on inspiring others to go to war on his behalf.

Hecate, the Triple Witch Goddess, has no compunction about taking direct divine intervention. As the goddess of magic itself, it can be argued that the power of ALL divine beings flows through her. I mean, she’s literally a triple-goddess. This is for all intents and purposes a 3-on-1 fight. In “The Witching Hour,” the entire might of Mt. Olympus couldn’t stand against the world-bending wrath of Hecate. Ares may be the angriest god on the hill. But if the whole Pantheon couldn’t stop her, he doesn’t have much chance on his lonesome.

ROUND SEVEN: MONGUL VS. DESPERO

This one is a battle of true heavyweights. Mongul is the champion of Warworld, a despot capable of fighting close to Superman’s level. Like Mongul, Despero is another physically imposing, hard fighting tyrant of his own planet. But while Mongul typically takes on one to three members of the Justice League at a time, Despero ruled the Silver Age as one of the JLA’s most high priority threats.

What sets Despero a cut above isn’t that he’s a stronger, more capable fighter- and that may actually be true- but his psionic abilities which allow him to dominate the minds of those around him. Mongul may be too strong-willed for Despero to completely dominate, but a quick daze could provide the momentary edge Despero needs to land a finishing blow upon his sallow challenger.

ROUND EIGHT: SINESTRO VS. LADY BLEEZ

Sorry, Bleez, but this one’s a mismatch. You could make a solid argument for Lady Bleez as the second-most capable, powerful, and furious member of the Red Lantern Corps, but she’ll always take a backseat to the Corps leader, Atrocitus. As opposing leaders of their respective Lantern Corps and living representatives of their cosmic emotional entities, Sinestro would be much more evenly matched with Atrocitus himself. In a war between the two factions, Sinestro would be likely to leave the likes of Bleez to a trusted lieutenant, like Arkillo, or Lyssa Drak -- or maybe even his own daughter, Soranik Natu. But Bleez? Hal Jordan she ain’t. Thaal Sinestro is out of her league.

Of course, that may be what Sinestro himself goes into this fight thinking -- and Sinestro’s pride has often proven to be his downfall. After all, I suppose you could fill a mass grave with fools who dared to underestimate Lady Bleez.

Who will today's victors be? Vote now and talk about your choices in the Community!