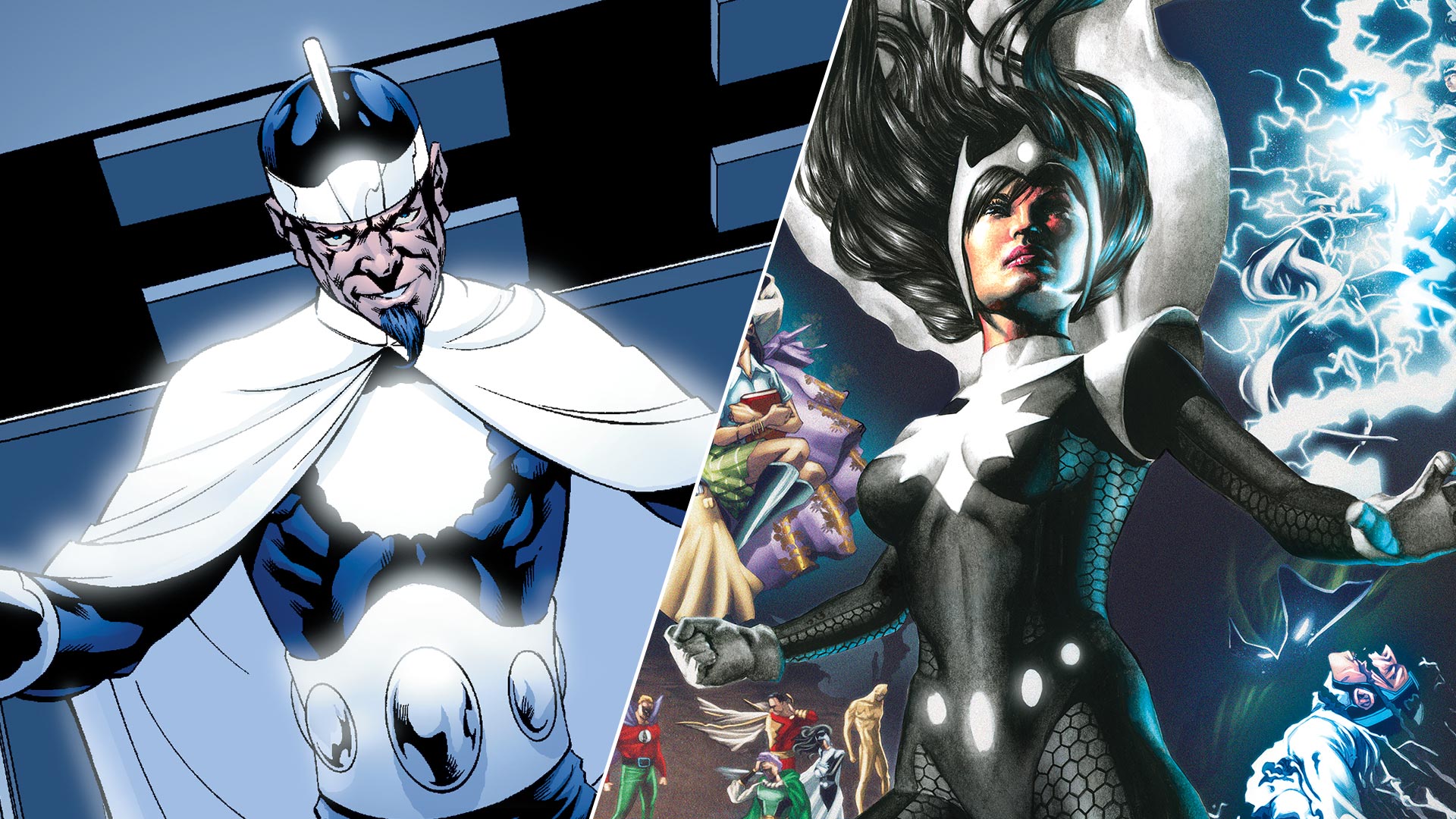 Crisis of Confusion: 8 Characters Changed by a DC CRISIS

The multiverse can be a confusing place, especially when there are several versions of most characters spread across infinite Earths. It’s confusing enough to clarify “which Robin?” without also having to say “which Earth?” too! Often times, universe-spanning events are used to cut down on the confusion by eliminating, replacing, or combining characters. And while some characters are constant, others ebb and flow in and out of existence. We’re here to breakdown seven of the most confusing Crisis character changes! 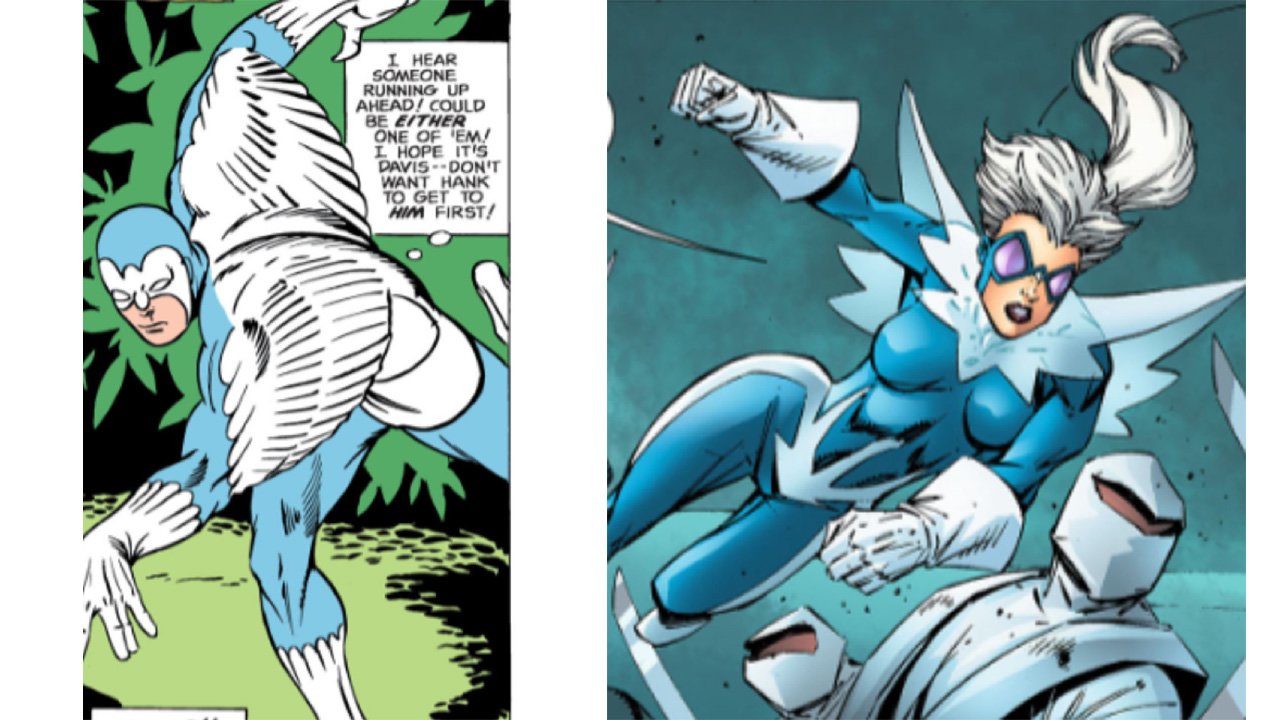 Don Hall and his brother Hank were the original Hawk and Dove. In a moment of despair, the brothers were given the powers of peace and war respectively. Don, the more passive of the two, “donned” a blue outfit to contrast his brother’s ragin’ red threads. In Crisis on Infinite Earths, Don saved a small child, but it cost him his own life. He was vaporized by a Shadow Demon, leaving Hank all alone. At the same time, young Dawn Granger was contacted by the voice of Peace and bequeathed the powers of Dove.

Dawn attended Georgetown University, where she quickly deduced Hawk was her classmate Hank Hall. Initially hesitant to team up, Hank relented and the two have been fighting crime ever since. Don Hall has appeared a few times since, most notably as an undead zombie in Blackest Night. 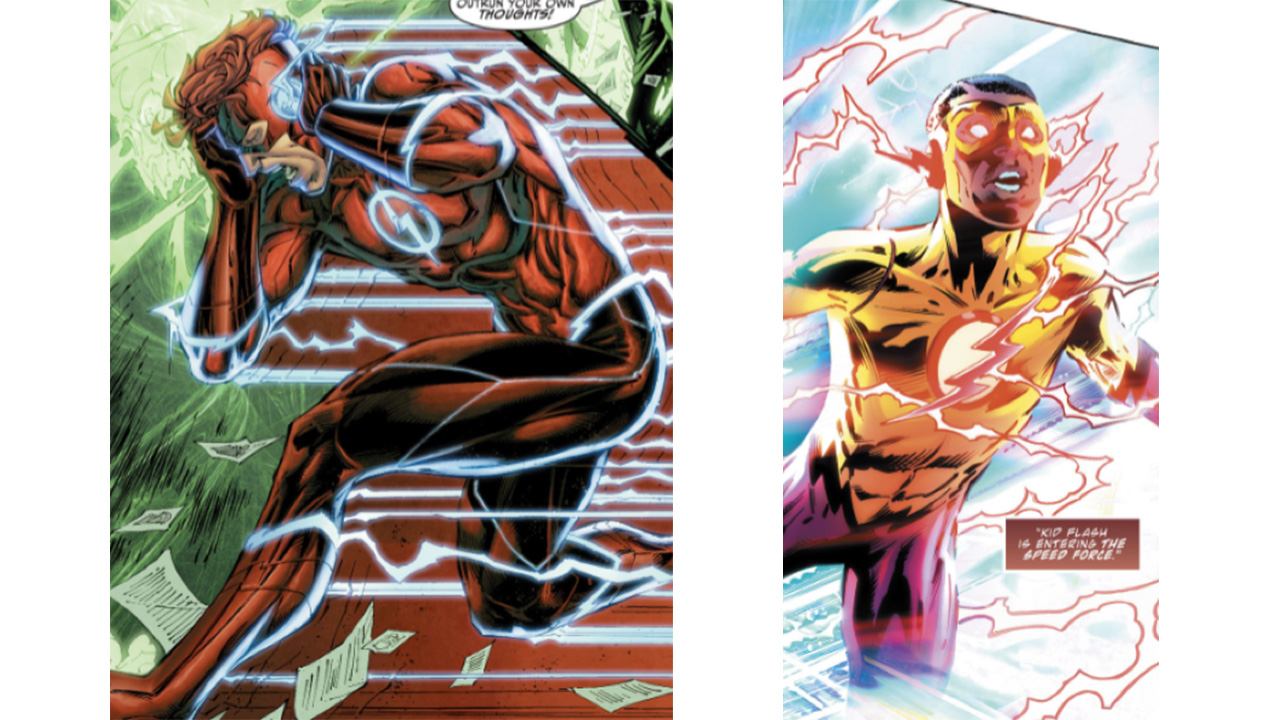 Wally West may have the most confusing history of anyone on this list. The nephew of Iris West became Kid Flash after a similar accident to his uncle's. After Crisis on Infinite Earths claimed Barry Allen, Wally West took up the mantle of the Flash. After Flashpoint, Wally returned to his original Kid Flash persona, rejoining the Teen Titans. He happily fought alongside them until the Rebirth era, in which he was erased from existence and replaced with a new Wallace West. No, he isn’t that fast, you’re actually seeing double! This new Wally is the son of the third Reverse Flash. (Still following?)

The original Wally West, watched the new universe from his Speed Force prison. Once free, he sought out his old friends who only remembered him after being shocked by his Speed Force lightning. He warned them of a presence he sensed leading to the Doomsday Clock storyline and was heavily featured in the recent Heroes in Crisis. 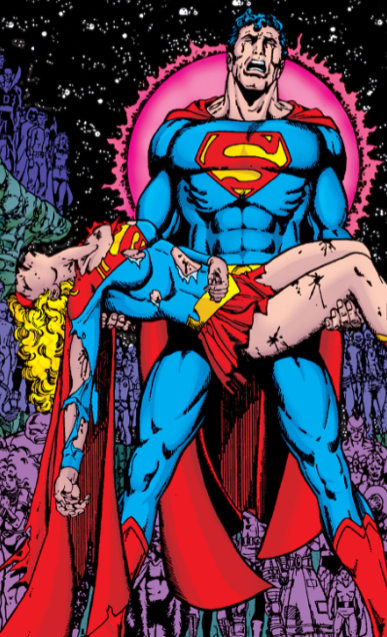 The Death & Rebirth of Superman's Cousin

Kara Zor-El was sent to live on Earth with her cousin Kal-El. He trained her to be Supergirl and even made her a costume that reflected his own. Kara fought against the Anti-Monitor to save her cousin, but was struck down in a moment of distraction. She died in Superman’s arms, creating the iconic image we know today. After her burial, she was almost entirely erased from the DC Universe (save for a statue erected by the Legion of Super-Heroes). After Crisis on Infinite Earths, no one remembered her at all.

Kara later returned as Kal-El’s older cousin, whose ship got knocked off course and arrived long after he was a grown man. So much for all of that sweet babysitting money…

ARE YOU THERE, HAWKGOD? IT'S ME, CARTER 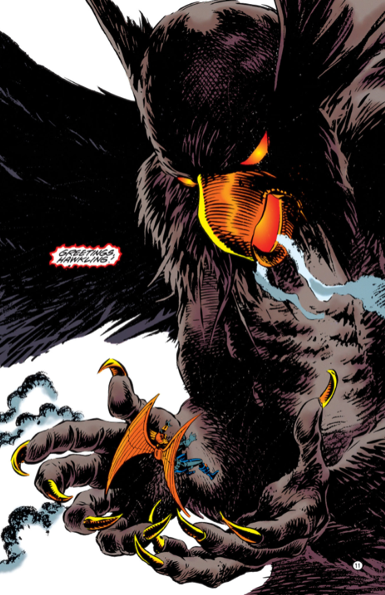 Carter Hall is the reincarnation of Prince Khufu, who became Hawkman after finding an alien spacecraft. Hall used these powers for good and eventually joined the JSA. After Crisis on Infinite Earths, Hawkman and the JSA were stuck in limbo to forever battle a never ending Ragnarok. They were freed, but unfortunately Carter faced more bad luck. In Zero Hour, Carter Hall died and merged with the totally different Katar Hol, a Thanagarian police officer. With their powers combined, they formed a “hawk god” creature. This terrifying abomination has remained burned into the minds of comic readers. Gotta love the excess of the '90s!

From Huckster to Stone Cold Villain

This lovable pitchman was the money and management behind the Justice League International. His search for “the next big thing” led him to become infected and puppeted by an evil alien tech known as Kilg%re. This helped him gain knowledge, fame, and fortune, as well as sending his consciousness into the body of a cyborg after his death. Basically, your standard shady manager story.

The Infinite Crisis timeline restored his human form and subsequently defragged the Kilg%re portion of his being. He instead became a criminal mastermind, using the Justice League International to gain intel on superheroes. He became responsible for the Ted Kord Blue Beetle’s death and the O.M.A.C. attack on Earth. From puppet to puppeteer, Maxwell Lord took a very dark turn. 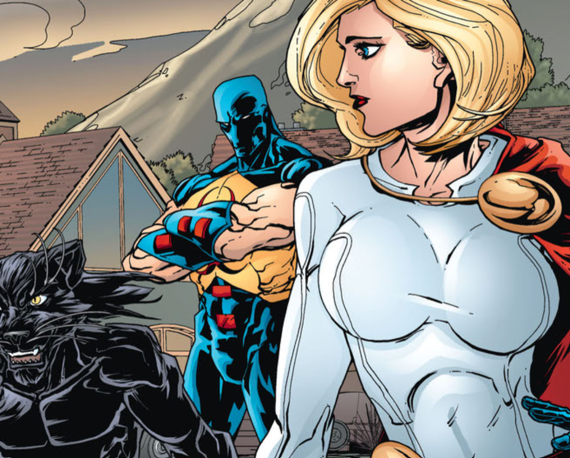 From Krypton to Atlantis and Back

Another Kryptonian Kara, but this time Zor-L (with no “E”). She was the Earth Two version of Supergirl who was raised by Clark and Lois. Earth Two was destroyed during Crisis on Infinite Earths, but Power Girl stuck around. She was now the granddaughter of an Atlantean Sorcerer.

Fortunately, this was re-retconned in Infinite Crisis. She was once again revealed to be the Supergirl of Earth Two. 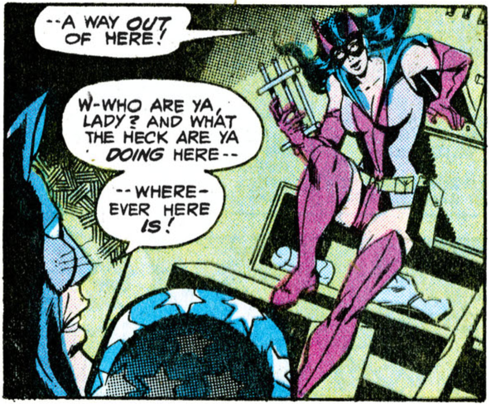 There and Back Again with Huntress

The daughter of Earth Two’s older Bruce Wayne and Selina Kyle, Helena Wayne followed in her parents’ footsteps and became the vigilante known as the Huntress. She traveled to Earth One and sought out its Batman’s guidance and training. For several years she traversed between both Earths, fighting crime and saving the world.

With Earth Two erased in the aftermath of the Crisis on Infinite Earths, Helena Wayne vanished from existence. It would be a few years before Huntress showed up again, this time as New Earth’s Helena Bertanelli. 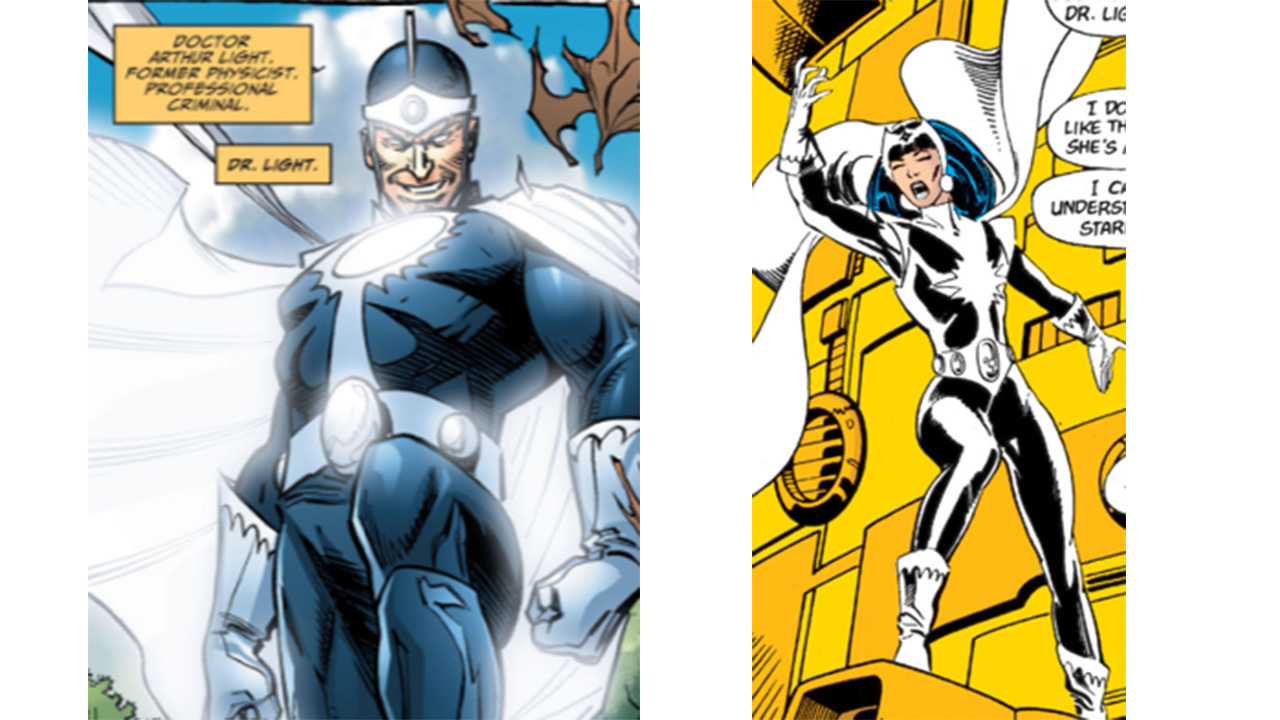 Just What The Doctors Ordered

Arthur Light started out as a minor foe to the Justice League. He used his ability to control and manipulate light for petty crimes. Later, he joined the Suicide Squad and even had a brief stint in Hell.

Concurrently, the Monitor created a hero to stop the Anti-Monitor, this hero was also Doctor Light. Astronomer and medical doctor Kimiyo Hoshi adds superhero to her lengthy resume when she saves Superman in the Crisis on Infinite Earths. She saves the day when she absorbs the Anti-Monitor’s power and blasts a hole right through him. She sticks around after Crisis, joining both the Justice League and Justice League Europe.

Her counterpart didn’t fare so well. After commiting a depraved and heinous act in Identity Crisis, Zatanna wiped his mind and turned him back into a minor villain, one only suited for teenagers. In most cases, his actions would have put him on a list that wouldn’t allow him anywhere near kids.

What's your favorite Crisis character switcheroo? Let us know in our Community!