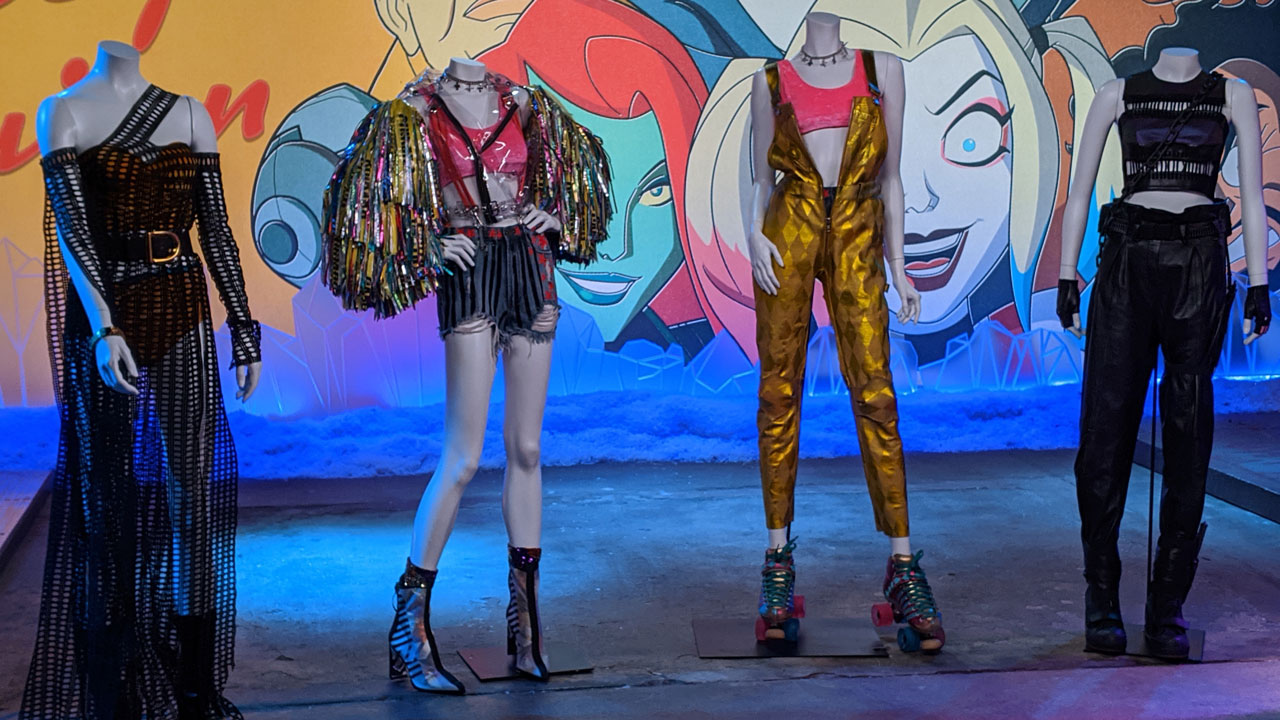 If you’ve spent any time at a comic convention recently, then you’ve probably noticed the legions of Harley Quinn cosplayers skating across the con floor. And ever since the trailer for Birds of Prey dropped, fans have been inspired by the dynamic new looks for Harley, Black Canary, and Huntress. Now that the movie is in theaters, its impressive costumes are inspiring the imaginations of fans around the world. We recently had a chance to chat with Erin Benach, who designed the costumes for the movie. She told us what it was like the build a new world with wardrobe, how an old soap opera rerun inspired Harley’s look -- and shared some tips for curious cosplayers. Here's what she had to tell us...

Does the superhero genre give you more creative freedom than other film genres?

Being able to jump into this universe gave me more options and tools, because it was a limitless world. We were creating Gotham, between me, and [director] Cathy [Yan], and the [production] designer, and everybody that was working on it. We were creating a Gotham that lived. A certain version of Gotham, that was sort of down-to-Earth and gritty. It sort of lived very low off of the ground, versus the perspective of above. Because of that, we also have the world of these characters that could do, and say, and react in ways that were beyond normal. We had this combination of realism and fantastical. That was what was so interesting to me about the project. We can kind of base ourselves in realism -- which is why a lot of the costumes are sort of based on street culture, and street fashion, and street clothes -- and also marry it with the fantastical. That was really the fun part about it.

Harley had a few memorable outfits in this movie, which were different from what we in Suicide Squad. Where did you begin with her new looks?

I think the same process that I used for all of my characters in all of the films that I’ve ever done, which is character and psychology. I ask myself, "What are the character traits? And what are the things that make Harley who she is?" She’s anarchistic, she’s fun, she’s smart, she’s lively, she can be mean, and she can be evil. I took all of the traits. She’s childlike, she has an inner child to her. All of these parts of her that were character traits and things I had read about -- whether it was from the comics, or from the shows, or from Suicide Squad -- taking the character as a character and interpreting it in our world, which is really what we do for every character. 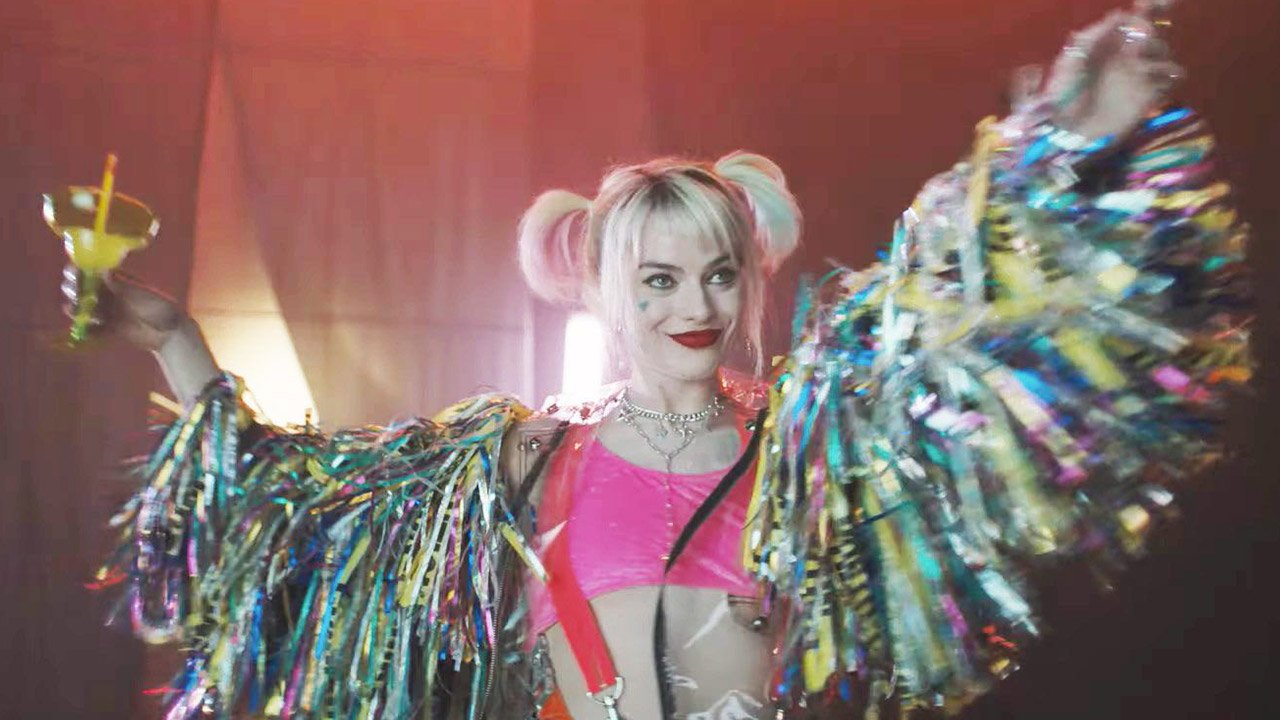 In additon to Harley's caution tape jacket, which is what everybody will be wearing at Comic-Con this year, we have her gold outfit, which you've described as her armored look.

We wanted to have a utilitarian feel and look to it, because it is truly when she gets down to business. So that the point of it.

Thank you for incorporating the roller skates from the comics.

Did you feel the weight of expectation while designing outfits for established heroes like Huntress and Black Canary?

Yes, totally. Which was frightening, by the way. I’d be remiss if I didn’t mention that it was a frightening prospect to take on something with such a huge intellectual property. I wanted their costumes to relate to these characters. I didn’t want them to be something different. The goal was to say, "Okay, I’m going to take from these characters -- like the dark, hooded, black silhouette of Huntress, and her color palette, black and purple -- and interpret it into our Gotham, into our world, into this sort of seedy, gritty, real place. That’s how I started.

What inspired your look for Dinah?

We often times see her in fishnets, and black leather, and she’s got a fierce character about her, and she’s street-wise. That’s sort of what stood out to me about her as a character. I took that and I elaborated. So we created that fishnet dress, and instead of her being in leathers, we took her and put her in a suit. It’s still a suit, but it’s not black leather. It’s not a cat suit. It’s an interpretation of a suit, and it’s a street interpretation.

What was the process of designing for Roman Sionis? Did you design his namesake, his black mask?

Yeah, I did the mask as well. He is uniquely powerful in that he’s a man who could have anything he wants in Gotham and beyond. So the idea was, when someone has everything they want, anything they want, what do they then do? For Roman, he’s an appropriator of culture, so he goes around the world, and he takes things from other cultures, and he takes it sort of for himself. He’s very self-indulgent, and he created his own insignia on the inside of all of his jackets and the outside of his lapels. It’s an RS, it’s his initials. He has a bust of his face. The idea was that he would create things for himself that only he could have.

Once the trailer for the movie was released, fans first started cosplaying at conventions using your costume designs. What was that like for you?

It’s happened in little bits and pieces over the years with other films that I’ve done, but this is different. I walked into the Harleywood premiere event, and there was a crew of 10 Harley girls on skates in my costume, and it was a moment for me, for sure. I love that they’re also doing Cassandra. It’s so cute.

What inspired your take on Cassandra Cain?

She’s the ultimate street rat right now. She’s just surviving, and she had to be able to look like she was storing away all the things that she steals. She’s a pickpocket. We wanted to make things that would make that doable. She fit into the world that we needed to create, where she needed to still feel that realism, and you need to have enough realism in order to have it make sense. It needs to be grounded somewhere.

Do you have any advice for Harley cosplayers?

If you want to be Harley, you should go to BillieValentine.com, and you should buy all the Harley jewelry [pictured below with Erin on the set of DC Daily] that you can, because that’s a jewelry line that I started from doing this movie. [Laughs.] I would start there because it’s the real deal. It’s always hard to get the costumes when it’s not the real deal, but when you can get the real deal, it’s pretty fun. And then, I’d get a pair of cutoff shorts, and I would then start painting away yourself on those shorts, as you see in the movie. The jacket’s going to be tough. I can’t wait to see what people do. 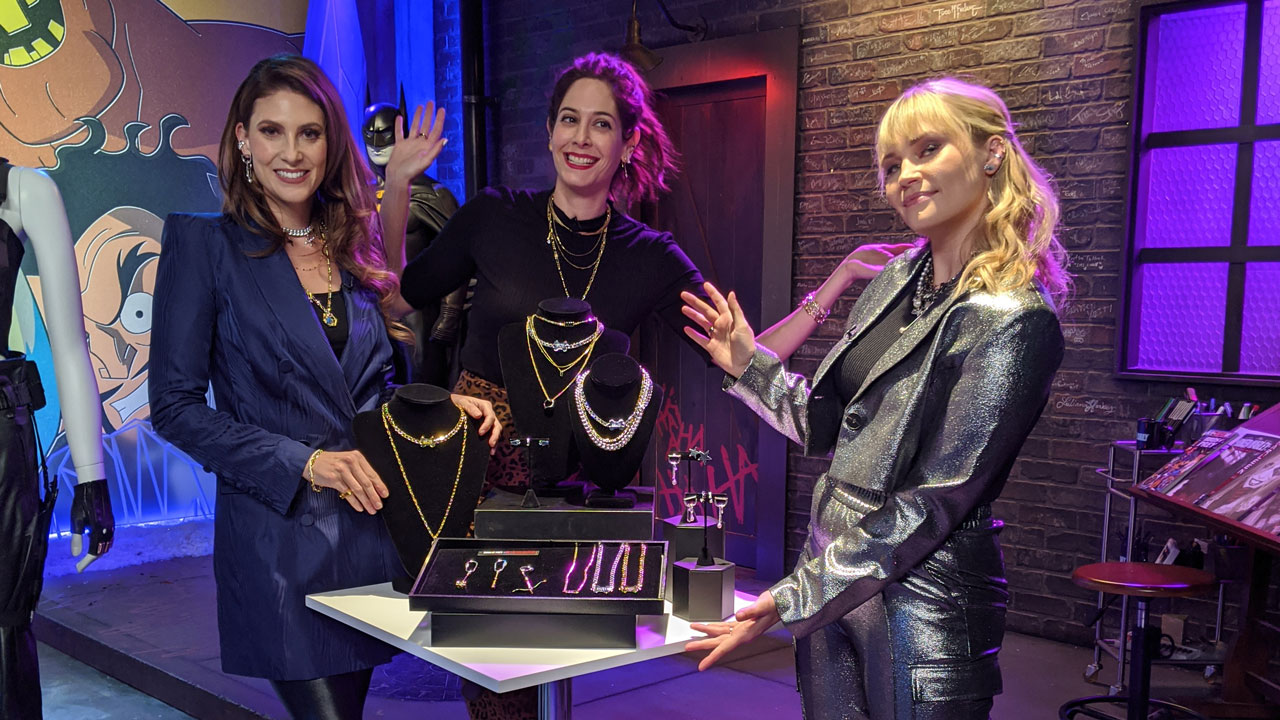 Get a piece of black fishnet fabric, and just drape it over your body. And then grab a big black leather belt and some military black boots, and you will get the same look for Canary.

High-waisted leather pants, cinched. Come on, you can find that. You get some bike chain and spray paint it black. We almost had that silver, by the way. That was a last-minute change where we spray-painted it black. It’s a bike chain, like when you lock up your bike. Make your own tank top. You can cut that out, sew it together. Use some elastic. Get crafty!

Did any particular piece of Harley Quinn lore especially inspire you when you were working on this movie?

I came across some interesting lore. Paul Dini, who had originally written Harley Quinn’s character [for Batman: The Animated Series], he said that he was inspired by a snippet on Days of Our Lives. Arleen Sorkin, Harley’s original voice actress, plays a jester, and I love the costume in that scene in the TV show. It’s now so vintage and cute.

It’s very cool that you went back and referenced the original source for the character.

Are you a Birds of Prey fan? Let us know in our Community!