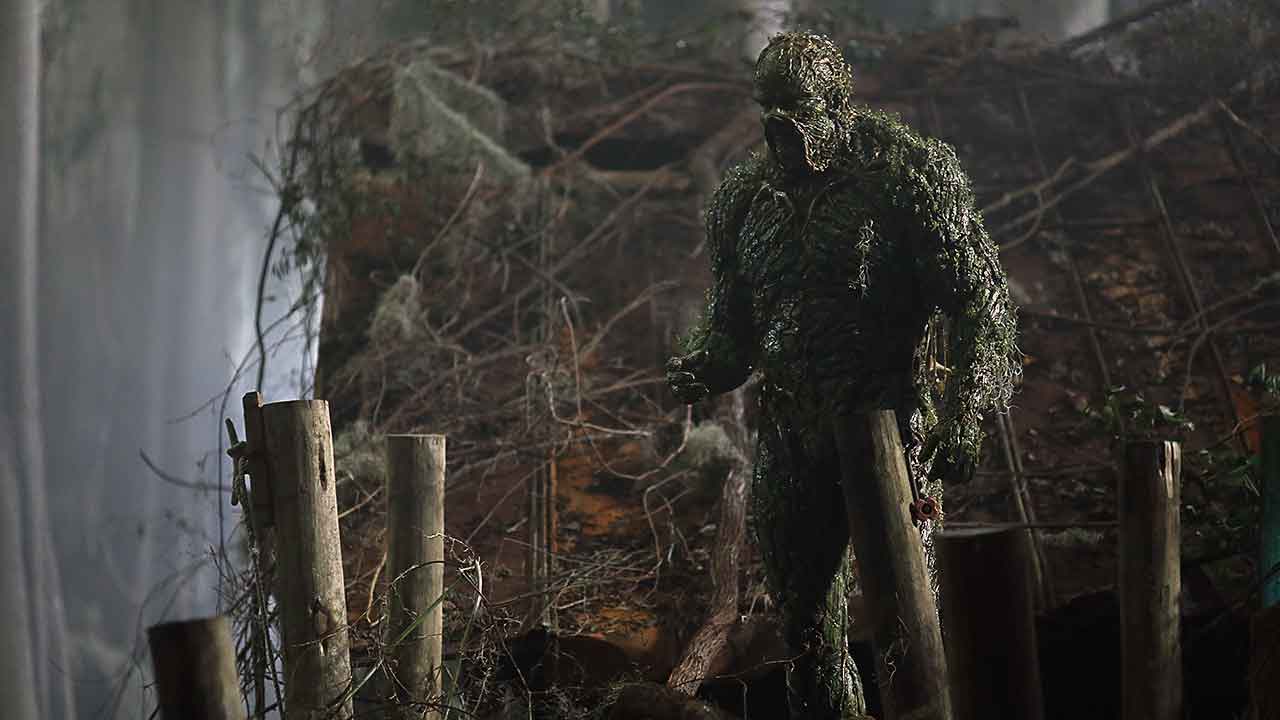 Have you watched the series premiere of DC Universe’s Swamp Thing yet? We’re just one episode in, and it’s already shaping up to be one of the most frightening horror experiences in recent memory. The show's pilot is seeded with Swamp Thing’s comic mythology, and sprouts into a bold screen adaptatation. Here are the comic book roots of Swamp Thing's first episode… 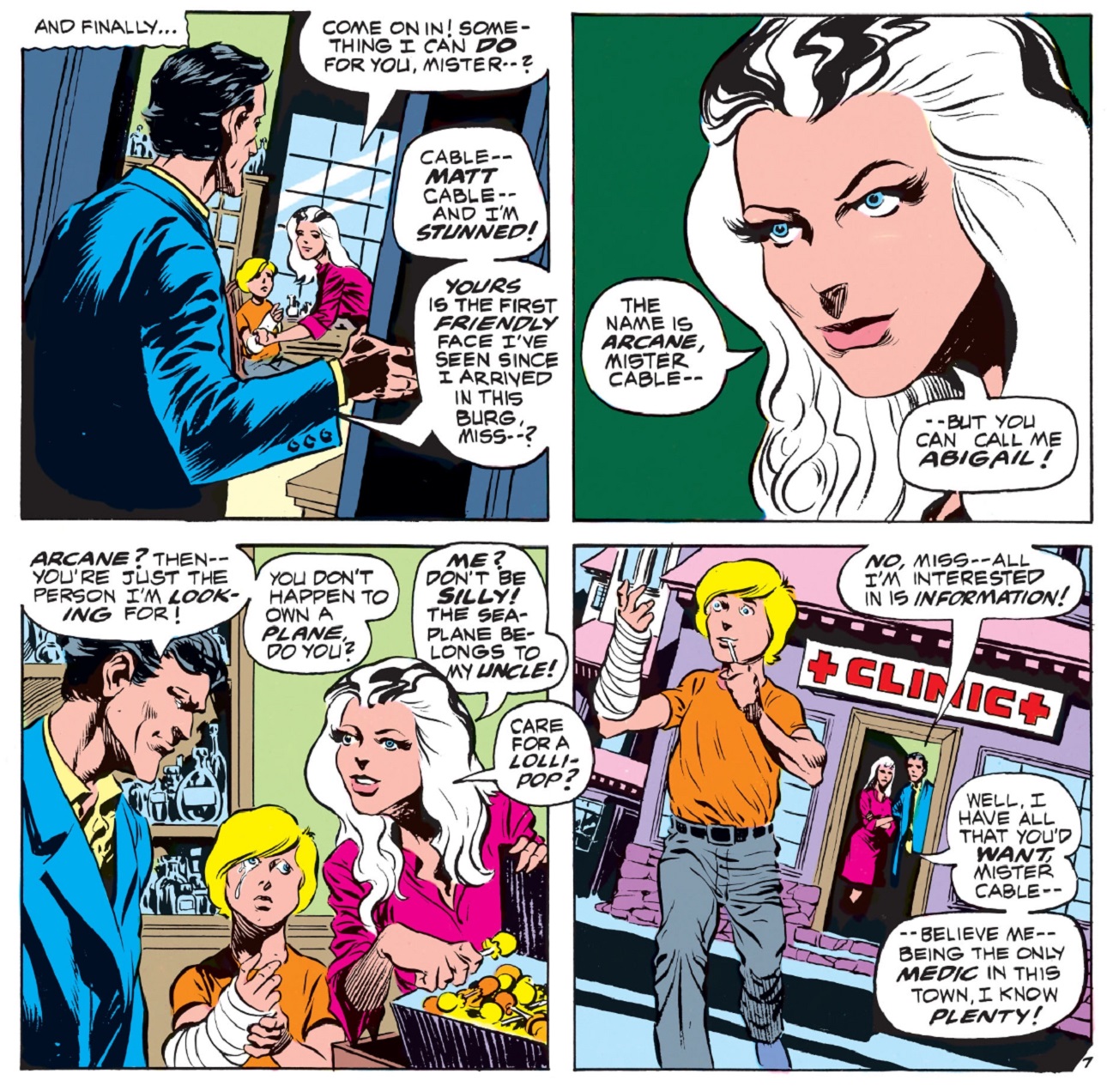 Crystal Reed’s portrayal of Abby Arcane is already one of the best parts of the series. Viewers first meet Abby as a CDC doctor trying to heal infected children. What was Abby doing when comic readers first met her in 1972's Swamp Thing #3 (written by Len Wein with art by Bernie Wrightson)? Abby was a town medic helping an injured child. Some things never change... But in addition to being a medic, Abby was the only person in her Balkan village with any medical training. After moving to America, Abby took on a series of other odd jobs, including a position at a home for children with disabilities. It’s nice to see Abby’s medical background used for the new series. By the way, this isn’t the first time we’ve seen the CDC help children in the Republic of Congo on a DC Universe live-action series. In the Titans episode "Doom Patrol," flashbacks show Gar Logan fighting an infection while visiting the African country. 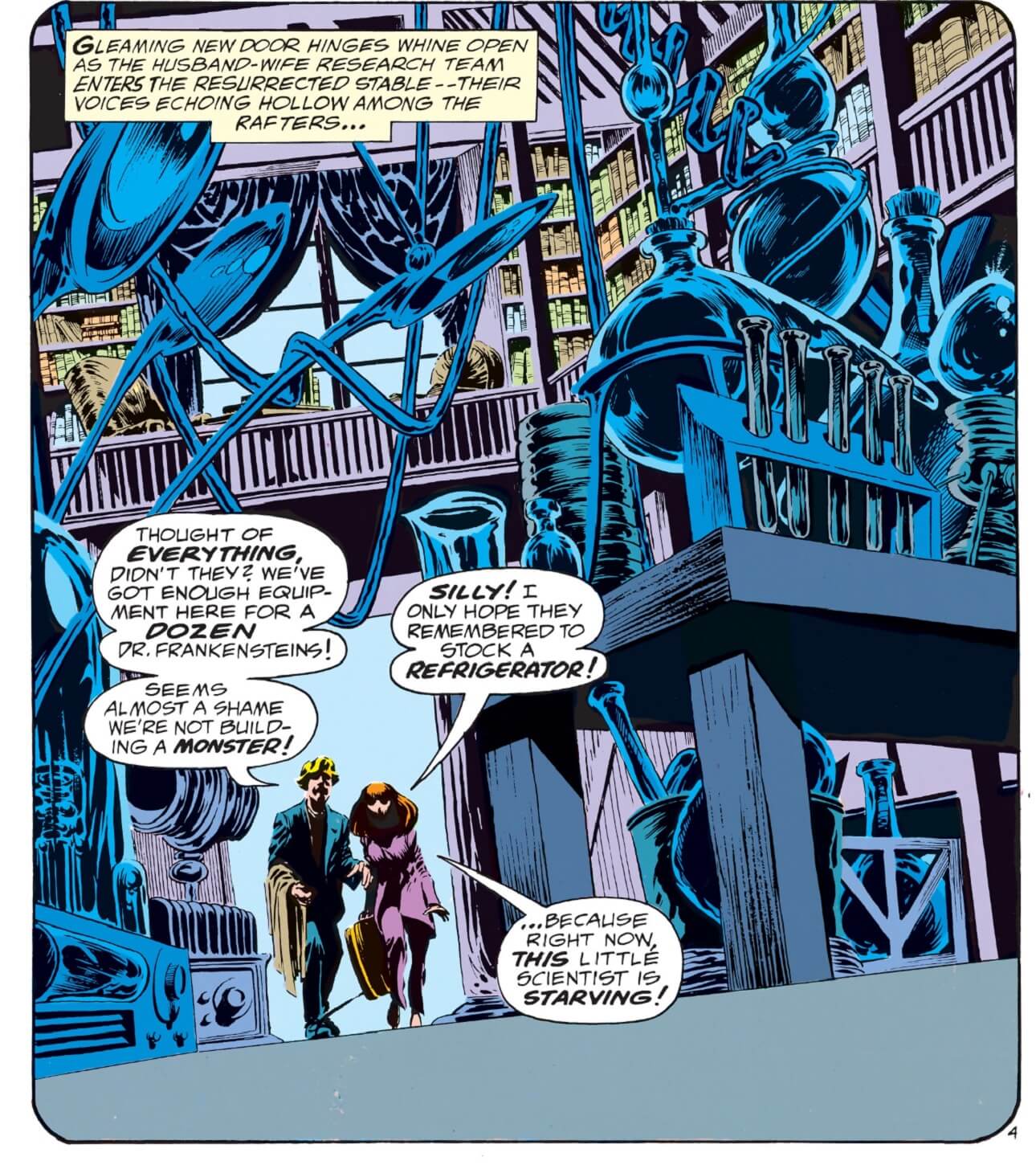 Screen scientists are often known for their over-the-top laboratories. But Alec Holland keeps things simple. Instead of doing his work in a basement or a corporate building, Alec sets up shop in a makeshift bungalow lab located on the swamp. It makes sense, since it puts Alec in the midst of the chaos he’s studying. Alec’s cabin was first seen in 1972's Swamp Thing #1 (written by Len Wein and penciled by Bernie Wrightson), as he and his then wife Linda set up shop there. The location was chosen so the couple could work on their classified Bio-Restorative formula in secret. Unfortunately, their cabin was discovered by criminals, who blew it up after the Hollands refused to sell them the formula. Most of the cabin survived the explosion, and Swamp Thing has returned to it many times over the years. We’ll talk a bit more about that explosion later….

Mutt of the Swamp 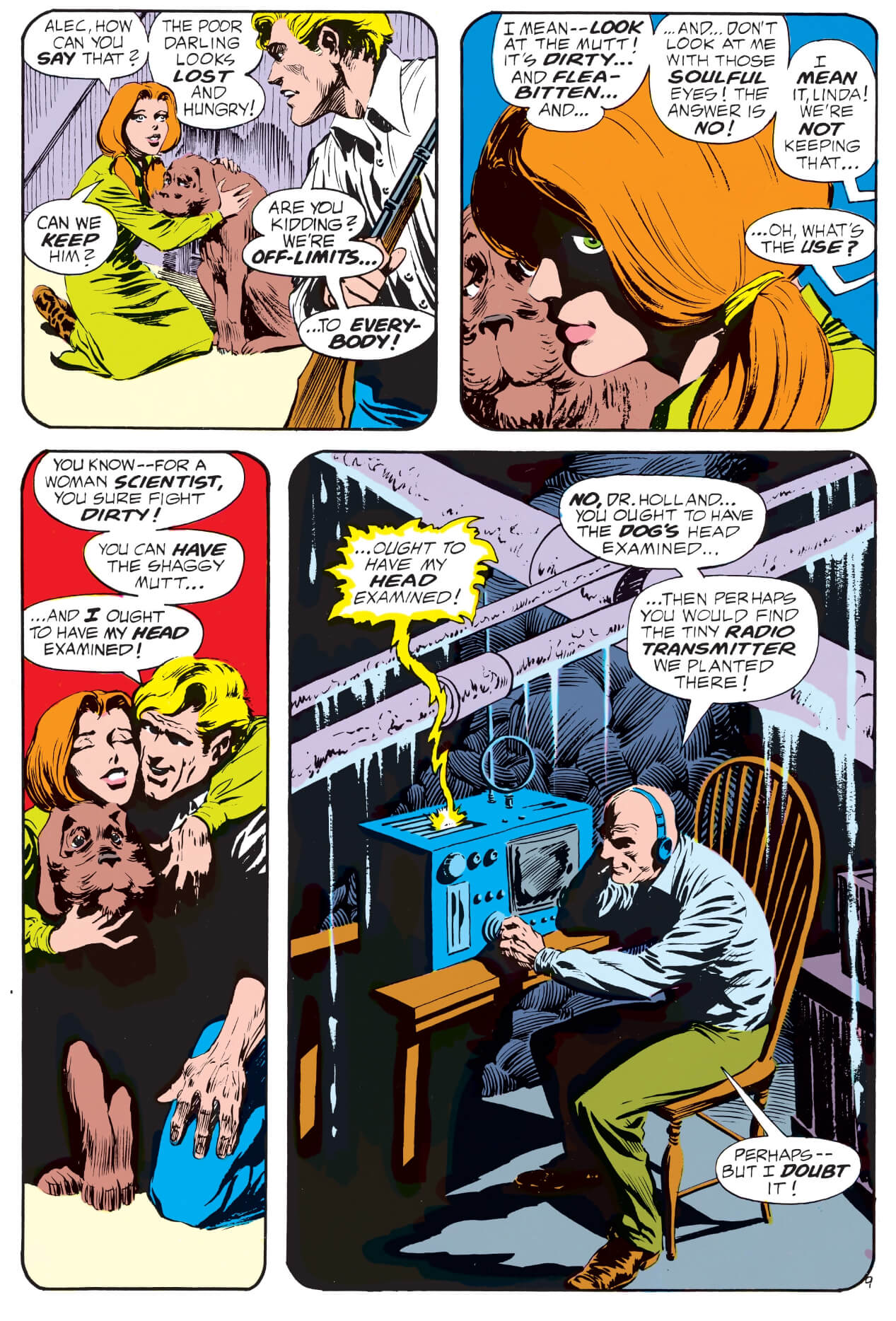 When Alec and Abby arrive at the bungalow laboratory, they’re greeted by a friendly dog named Garou. While keeping a canine around sterile lab equipment might not be the best idea, it’s hard to deny companionship when you’re in the unforgiving Louisiana swamp. The tradition of Alec’s lab having a resident dog comes from 1972's Swamp Thing #1, when he and Linda found a stray canine roaming the swamps. Linda convinced Alec to keep the dog, little realizing that it was a metaphorical trojan horse. The criminal group known as the Conclave had hidden a transmitter in the dog’s head and used it to spy on the scientist couple. When Alec transformed into Swamp Thing, the mutt was the first living creature he rescued from death after it almost drowned in the murky waters. After Linda was murdered, the dog (only referred to as Mutt) followed Matt Cable for a while. At times he caught up with Swamp Thing and stuck by his former master for periods of his early travels. This does raise an interesting question: with all the conspiracies going on around the swamp, is it possible Garou also has a hidden transmitter? 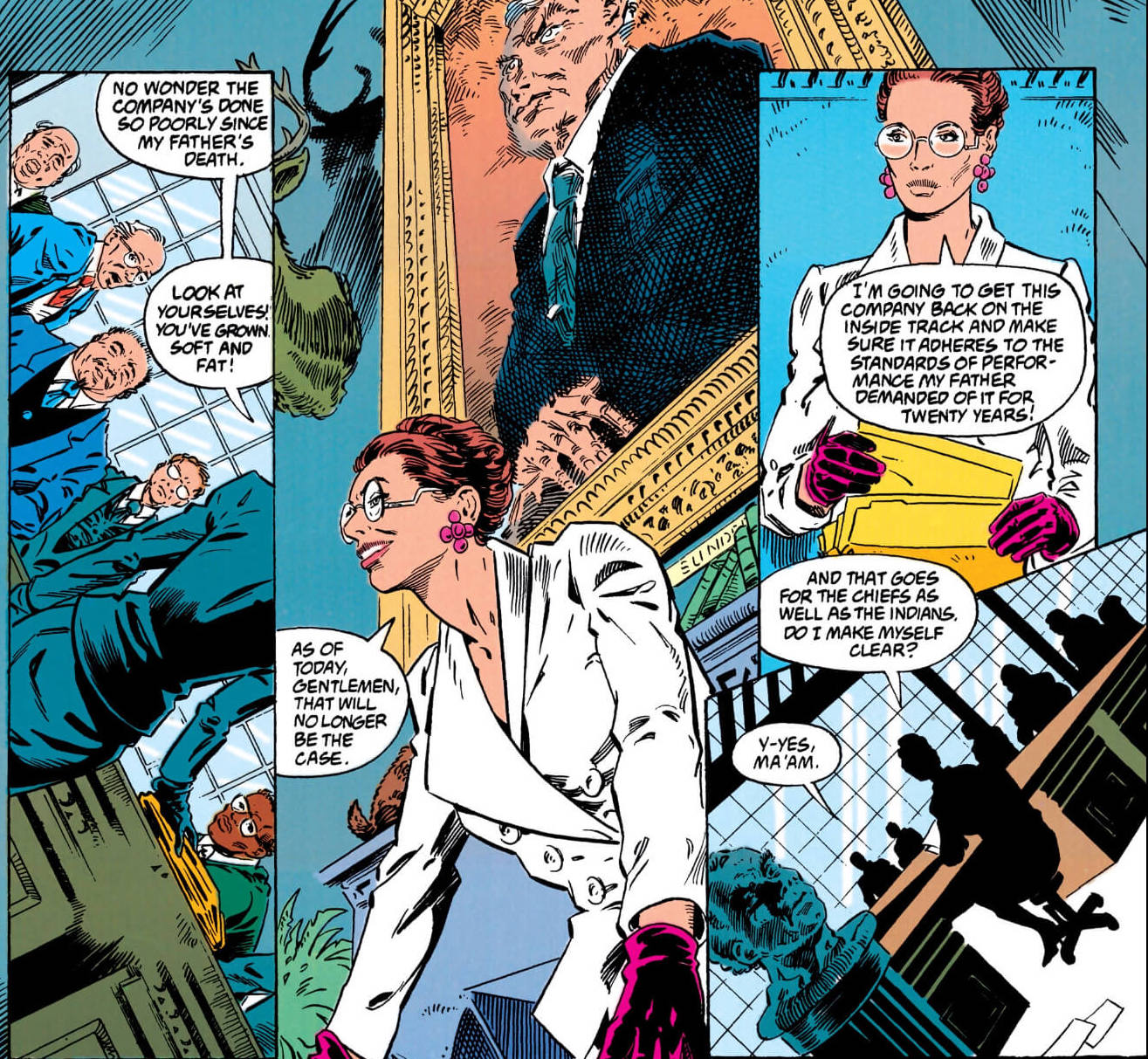 We’re only one episode in, and it’s already clear there’s something rotten in the city of Marais, and the Sunderland Corporation is probably behind it. Comic book readers first encountered the corrupt company when it launched a manhunt against Swamp Thing in 1982's The Saga of Swamp Thing #1 (written by Martin Pasko and penciled by Tom Yeates). Led by Avery Sunderland, readers witnessed the crooked corporation dump toxic waste, torture innocent civilians, and do whatever it took to cover its tracks. The screen version of the Sunderlands mention their late daughter Shawna. While the comic book version of Avery had a daughter, her name was Constance. Years after Swamp Thing killed her father, Constance took control of the Sunderland Corporation in Swamp Thing #121 (written by Nancy A. Collins and penciled by Scot Eaton). She wanted to prove herself as the son her late father always wanted, and used the company’s resources to get revenge on Swamp Thing. Ultimately her quest for vengeance caused the corporation to collapse once more, leaving the surviving Sunderland unfulfilled. While Constance is a separate character from Shawna, she does give us some insight into what type of corporate trickery we might expect over the course of this first season. 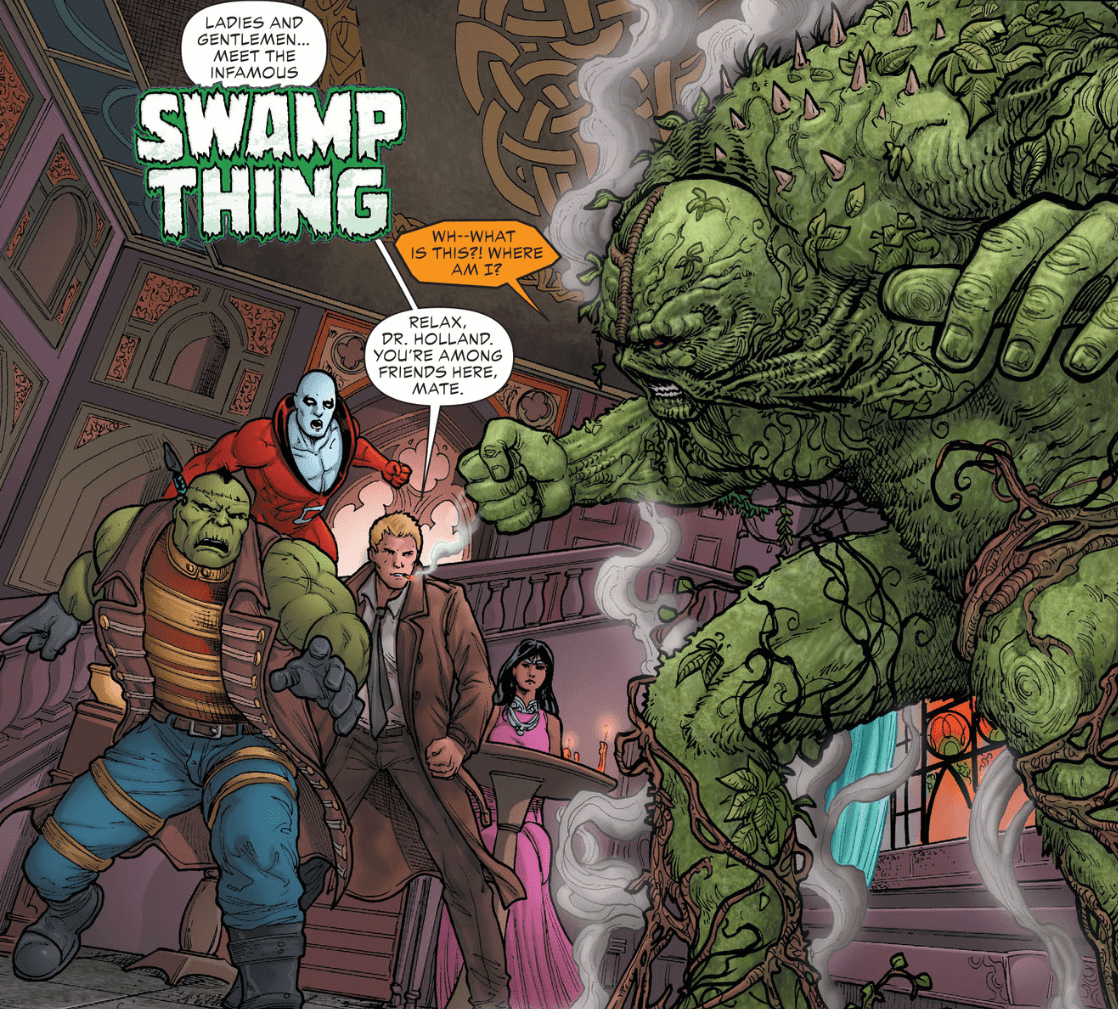 A Louisiana dockside bar might seem like an unlikely place to find two Justice Leaguers, but that’s exactly what happened in this episode. As Alec entered the establishment, he spotted Madame Xanadu and warned Abby about the “scary woman” sitting alone upstairs. While Alec is unfamiliar with the mysterious fortune teller, they once served as teammates in a supernatural offshoot of the Justice League. Madame Xanadu had formed the team known as Justice League Dark to combat threats from the occult when, in Justice League Dark #19 (written by Ray Fawkes and Jeff Lemire, penciled by Mikel Janin), Swamp Thing joined the team -- leading to a series of supernatural adventures. Madame Xanadu didn’t stick around too long after Swamp Thing joined, but for a brief time they were teammates. Perhaps Alec should think twice before describing her as scary... 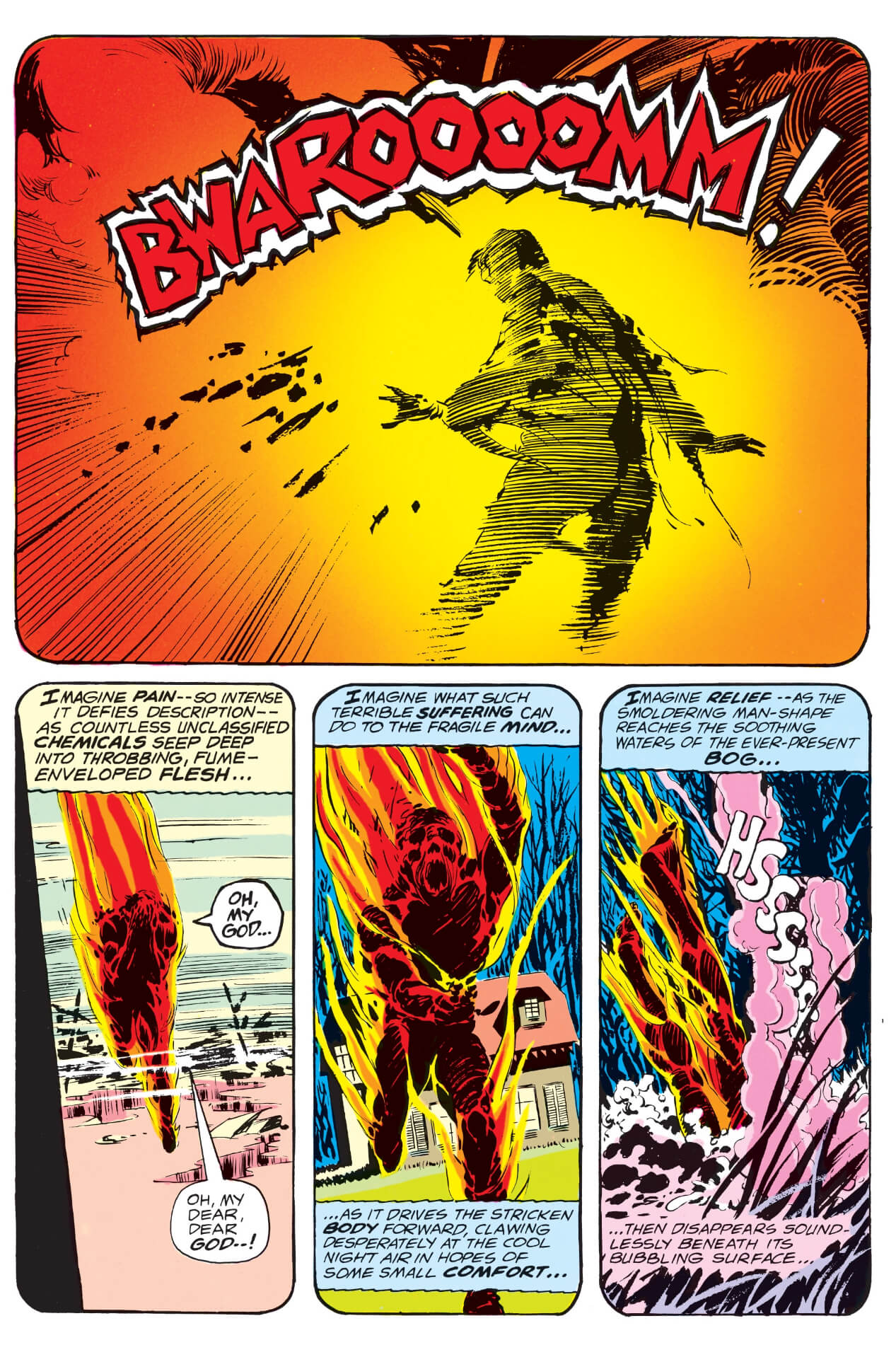 Poor Alec Holland can’t catch a break no matter what medium he’s in. Near the end of this first episode, Alec is attacked by a mysterious assailant while investigating the swamp. First Alec is shot, then the shadowy figure throws an explosive at Dr. Holland’s boat, causing it to erupt into flames. On the verge of death, Alec dives into the swamp for safety, but it appears a darker fate is awaiting him there. The attack on Alec Holland plays out similarly to a sequence in the iconic origin story in 1972's Swamp Thing #1. Alec finds dynamite in his lab, and is unable to defuse it in time. After he's caught in the explosion, Alec’s survival instincts cause him to dive into the deadly swamp. Afterwards, Swamp Thing is born. In the comics, the criminal group known as the Conclave is responsible for the attempt on Alec’s life. But the identity of Alec’s attacker in this episode is still a mystery. Could it be a member of the Sunderland Corporation? Will the Conclave appear in this show? Perhaps Madame Xanadu didn’t like being called scary? We’ll have to keep watching for answers...

BONUS: If you’re curious about the comic book origins of the supporting cast members, check out our recent article spotlighting the swamp’s most important residents.