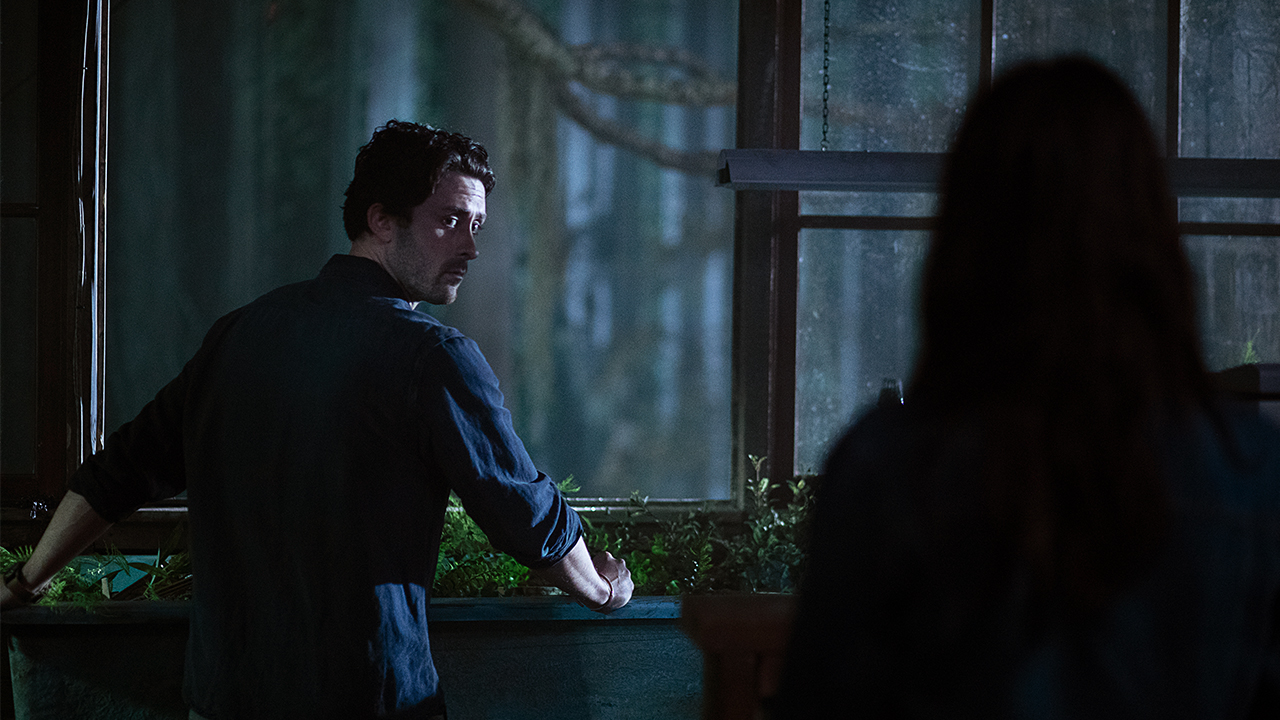 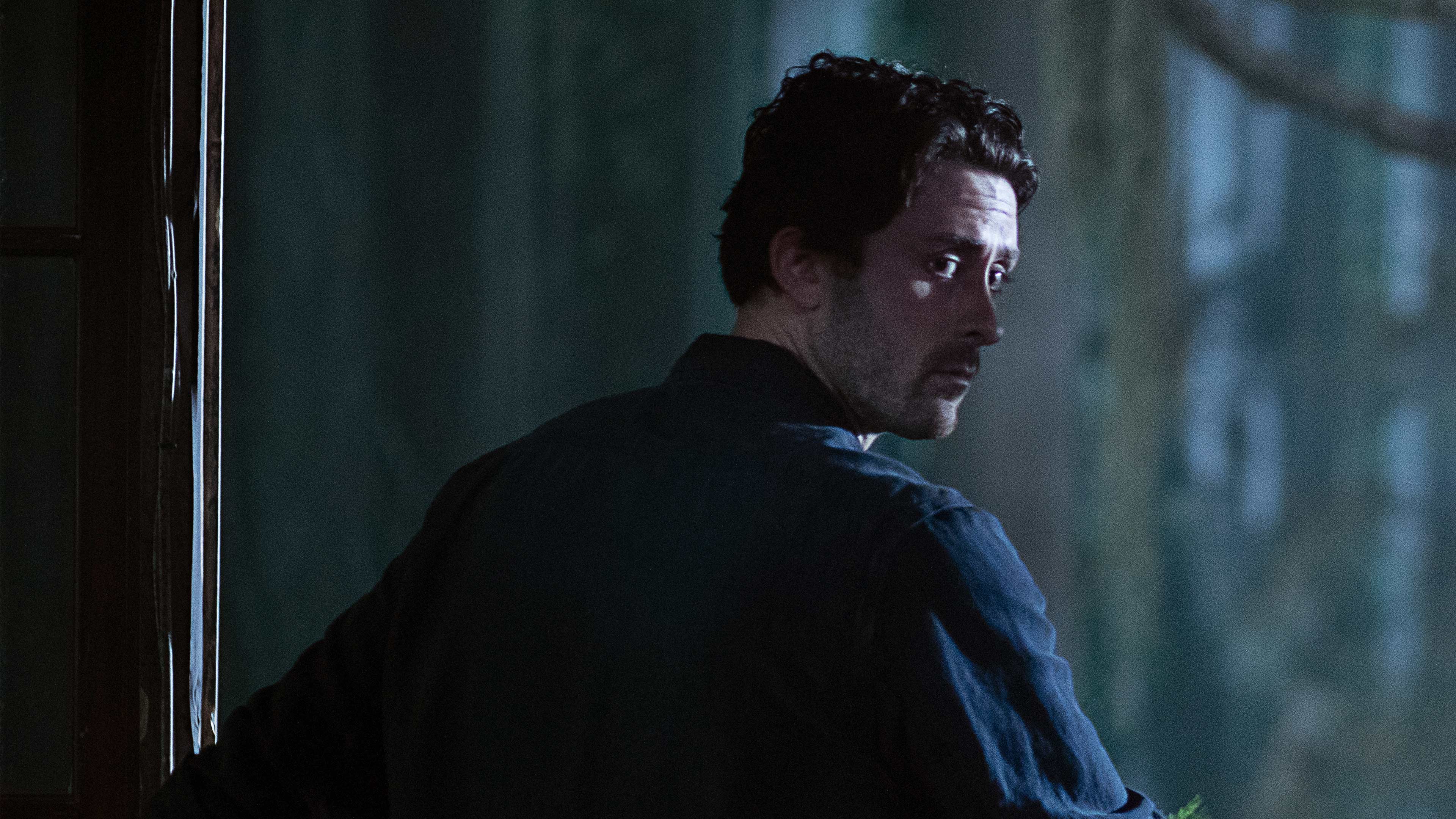 The war between the Rot and the Green has begun, and DC Universe’s ‘Swamp Thing’ gave us a chilling look at the frontlines. Swamp Thing’s connection to the Green is getting stronger, but will it be enough to stop the dark forces that have entrapped Marais? Each week we’ve examined how Swamp Thing’s rich source material has helped influence each exciting episode. Let’s break down the comic book roots and Easter eggs of “Brilliant Disguise.”

Abby and the Green 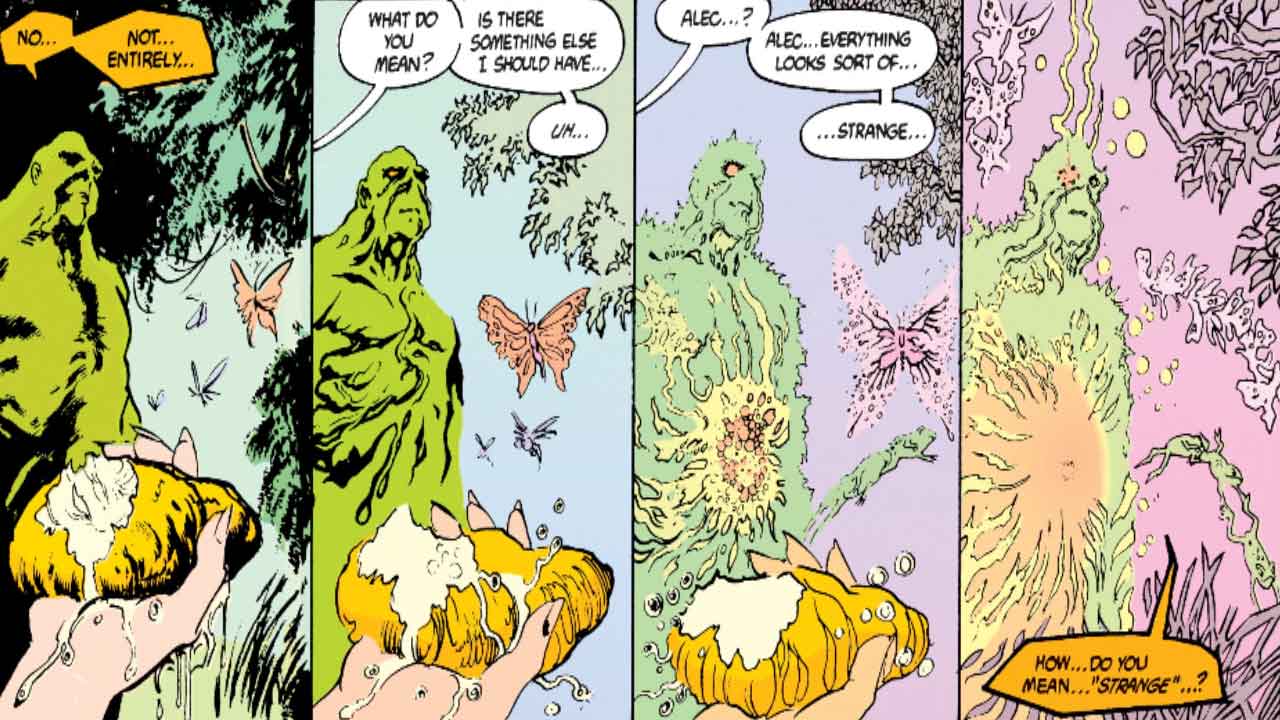 Things got a bit trippy for Abby this week, as she inhaled some spores from Swamp Thing’s body, which led to some interesting hallucinations. Not only was Abby able to see Swamp Thing as the human Alec Holland again, but she was also able to become more attuned to the Green. This experience is similar to something that happened to Abby during writer Alan Moore’s classic ‘Swamp Thing’ run. In ‘The Saga of Swamp Thing’ #34 (written by Alan Moore and penciled by Steve Bissette), Abby ate a yam grown from Swamp Thing’s body, and it allowed her to journey into the Green and experience a deeper spiritual connection with Swamp Thing. Since Swamp Thing wasn’t able to have sex, he and Abby used this ritual as their own way of making love. If you’re intrigued by this offbeat story, check out our appreciation of "Rite of Spring". 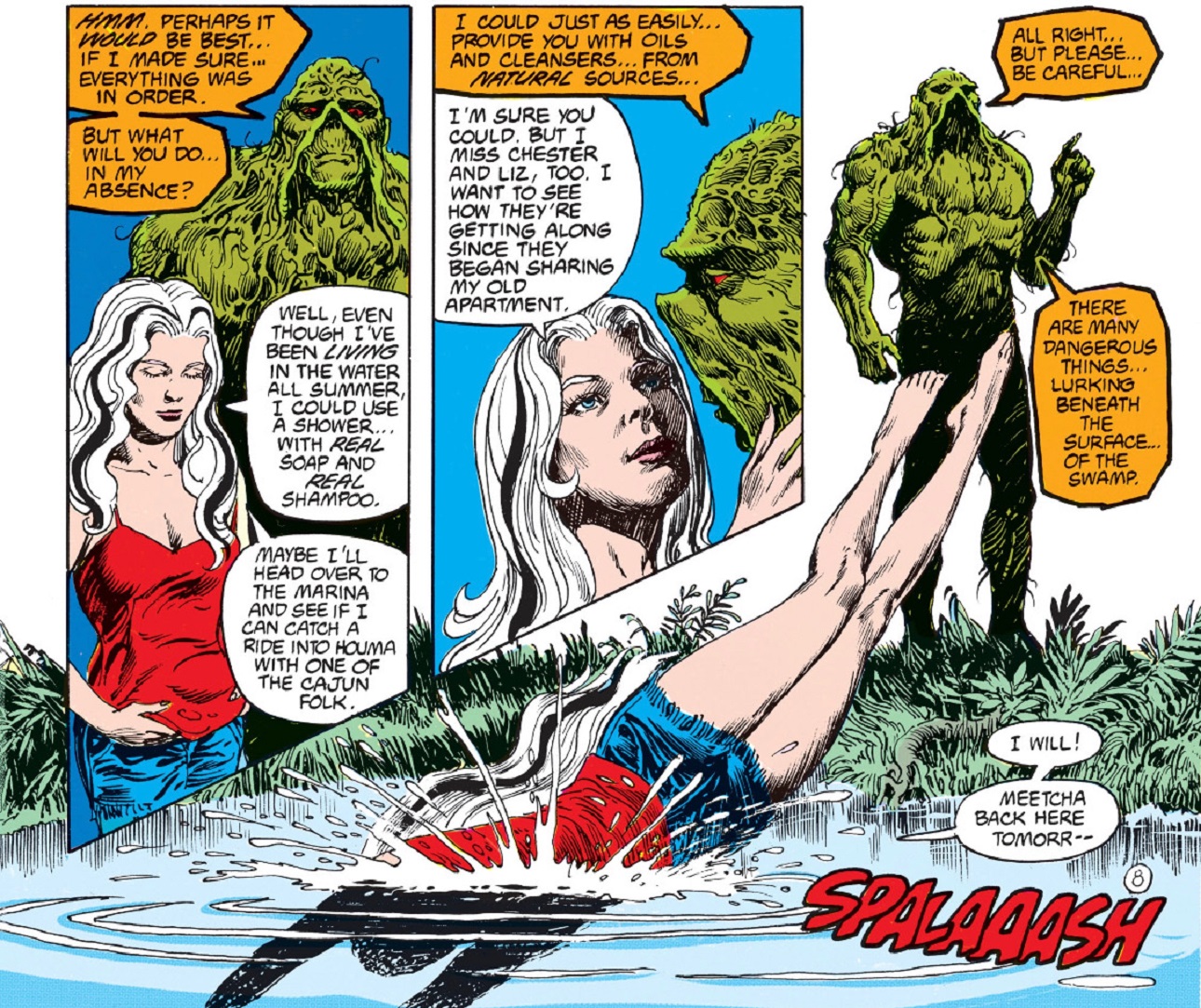 Who needs Uber Eats when you have Swamp Thing? Alec discovered a new hidden talent when he was able to use the Green to summon some food for a hungry Abby. It turns out that when you have the power to control all plant life, gathering food is a piece of cake! In the comics, Abby would often eat vegetables grown off of Swamp Thing’s body for sustenance. After falling in love with Swampy, Abby left civilization behind and decided to live in the bayou with her muck man. Thanks to Swamp Thing’s abilities, all of Abby’s needs were met. He was able to grow her food, and as he noted in ‘Swamp Thing’ #67 (story and art by Rick Veitch), he could even summon oils and cleansers to help Abby groom. Despite her unlimited source of food, Abby still had the occasional craving that even the swamp couldn't sate. In ‘Swamp Thing’ #93 (written by Doug Wheeler and penciled by Pat Broderick), Abby told Swampy she missed junk food and stared at a burger as if it was the most beautiful thing she had ever seen. Swamp Thing might be able to provide for most of her needs, but sometimes a person can’t resist the siren song of grease.

Alec and Abby vs. The Rot 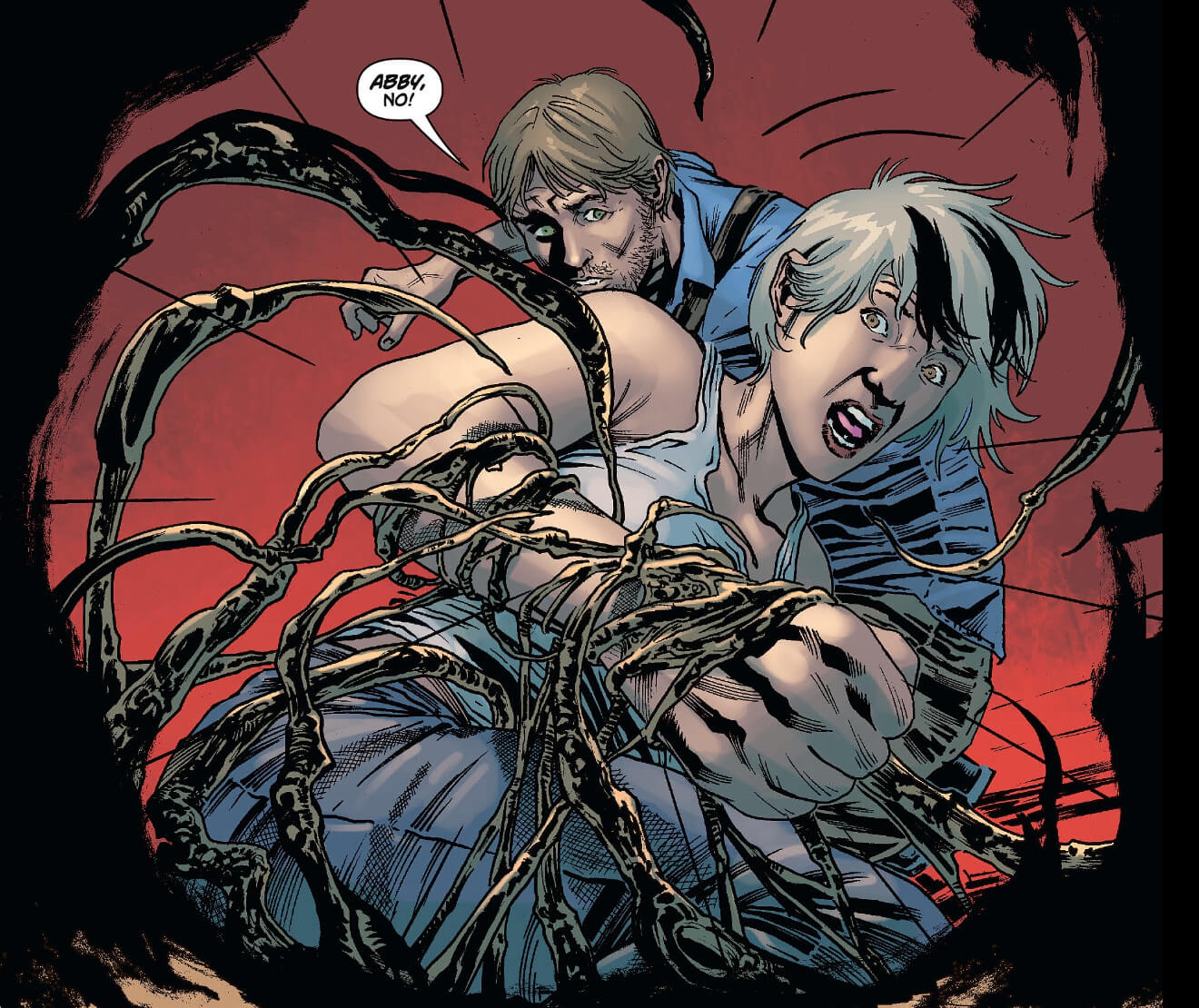 While the Green may be beautiful and peaceful, this week we saw its dark elemental counterpart – the Rot! We’ve talked about the Rot in previous articles, but this is the first time the decaying force has been directly named in the show. Alec Holland first learned about the Rot in 2011's ‘Swamp Thing’ #1-7 (written by Scott Snyder and penciled by Yanick Paquette) as the dark power began to bring death to the planet. Alec and Abby teamed up to take down the Rot, and a scene in which the duo ran from the decaying plants in ‘Swamp Thing’ #5 was adapted this episode. Alec also mentioned the Rot and the Green going to war within Abby’s body, which could be seen as a hint to her fate in the comics -- for Abby became an avatar of the Rot! Will the Rot overtake the Green and claim Abby here too? We’ll have to keep watching and hope for the best. 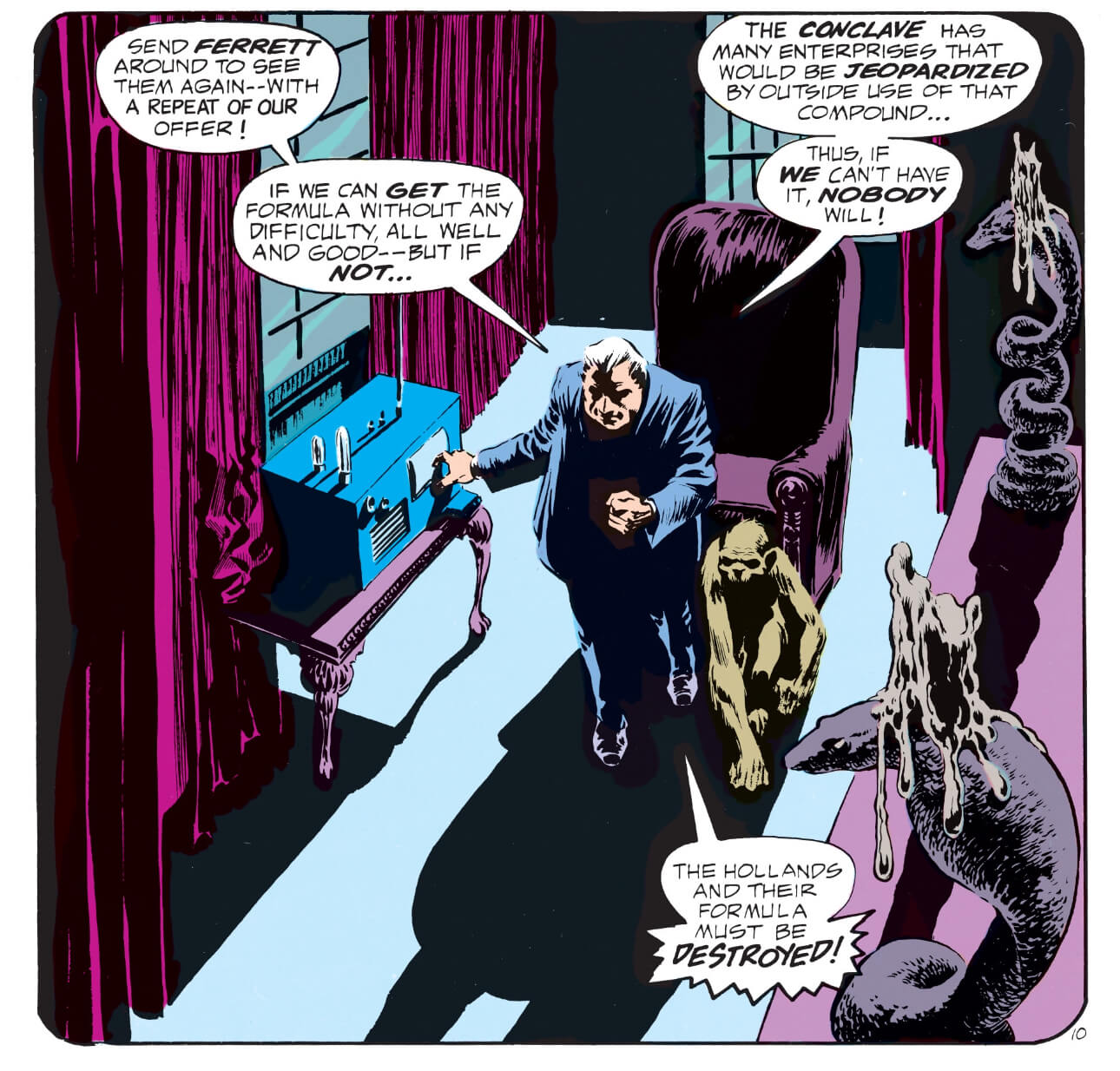 The leader of Conclave has shown his face, and if he’s anything like his comic book counterpart, then the citizens of Marais are in for a world of trouble. Nathan Ellery first appeared back in 1972's ‘Swamp Thing’ #1 (written by Len Wein and penciled by Bernie Wrightson), where he ordered his men to execute Alec and Linda Holland. In a way, he’s responsible for Swamp Thing’s creation -- since his termination orders set off a chain of events that transformed Alec forever. After Swamp Thing was created, he searched the ends of the Earth for Ellery so he could avenge Linda’s death. He finally caught up to him in ‘Swamp Thing’ #7.

It turned out that Ellery was running his Conclave organization out of Gotham, and even Batman was caught unaware. Swampy was all set to murder Ellery, but decided he didn’t want to become a coldblooded monster. Ellery seemingly fell to his death after being attacked by one of his mutated experiments; but he returned to plague Swampy again in ‘Swamp Thing’ #17 (written by David Michelinie and penciled by Nestor Redondo). Although the fall hadn’t killed Ellery, it damaged his body so much that he needed an exoskeleton to survive. The exoskeleton didn’t help when he accidentally got electrocuted during his rematch with Swamp Thing, ending his life for good. After watching this episode, one must wonder if Maria Sunderland is a better detective than Batman. After all, she was able to uncover the secret’s of the Conclave’s criminal dealings, something even Batman was never able to do!