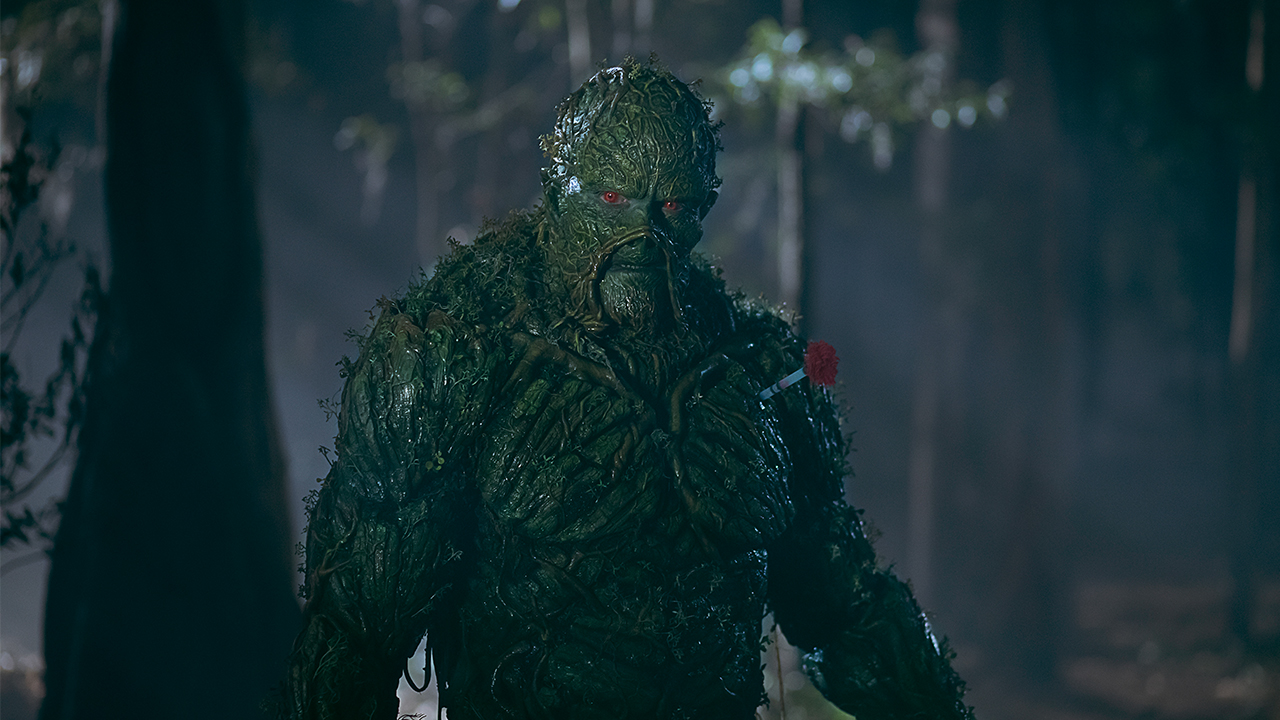 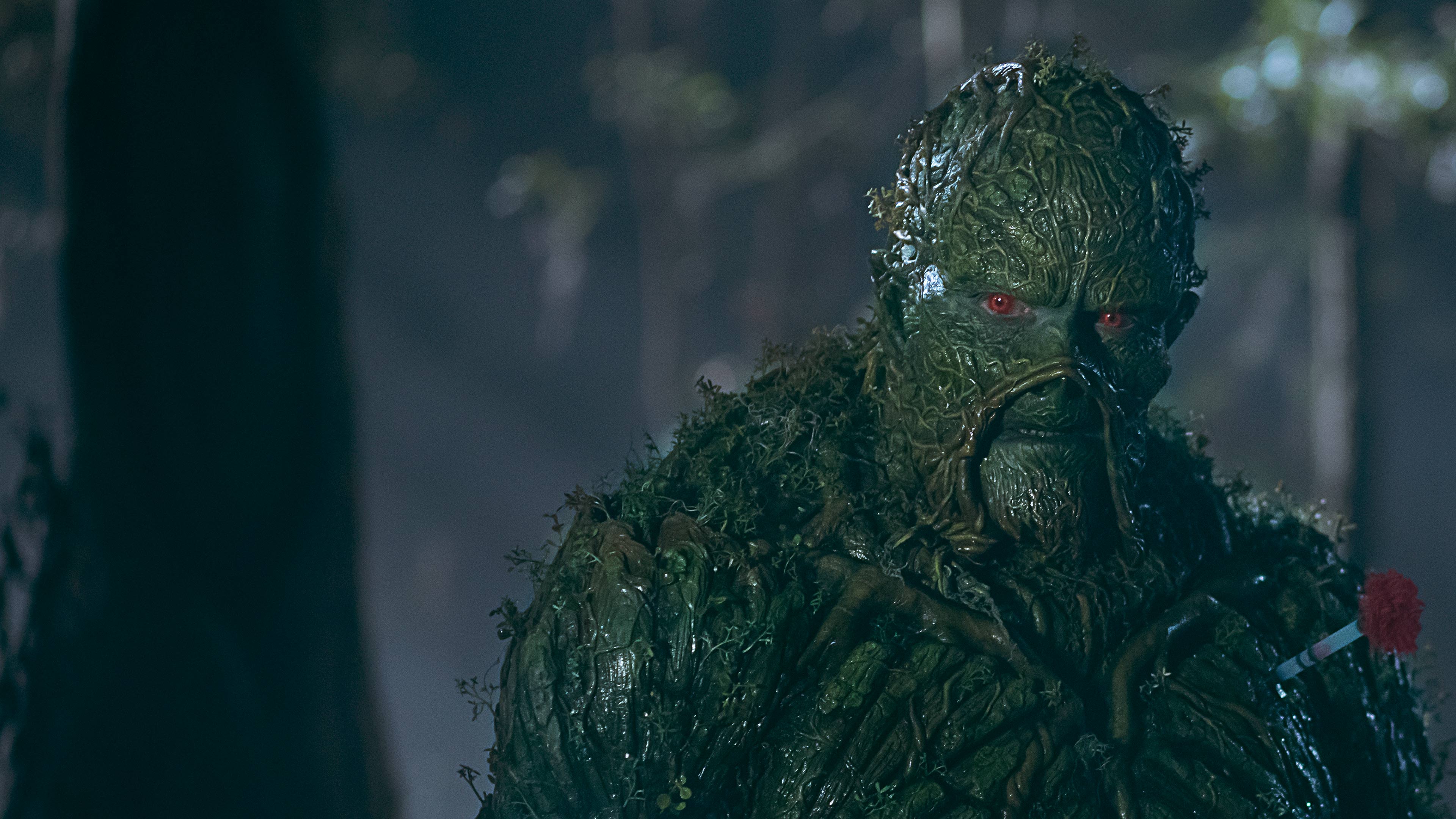 The Comic Book Roots of SWAMP THING Episode 6: “The Price You Pay”

Marais is shrouded in evil, and its dark grip on the town tightens in each episode of DC Universe’s ‘Swamp Thing.’ Daniel Cassidy seems to be the latest victim of Avery Sunderland’s greed, while Alec Holland continues to make sense of his mucky transformation and Matt Cable’s true nature is revealed. (Read our recap here.) Each week we’re taking a look at the comic books that inspired the show's characters and plot points -- let’s break down the Easter eggs in “The Price You Pay.” 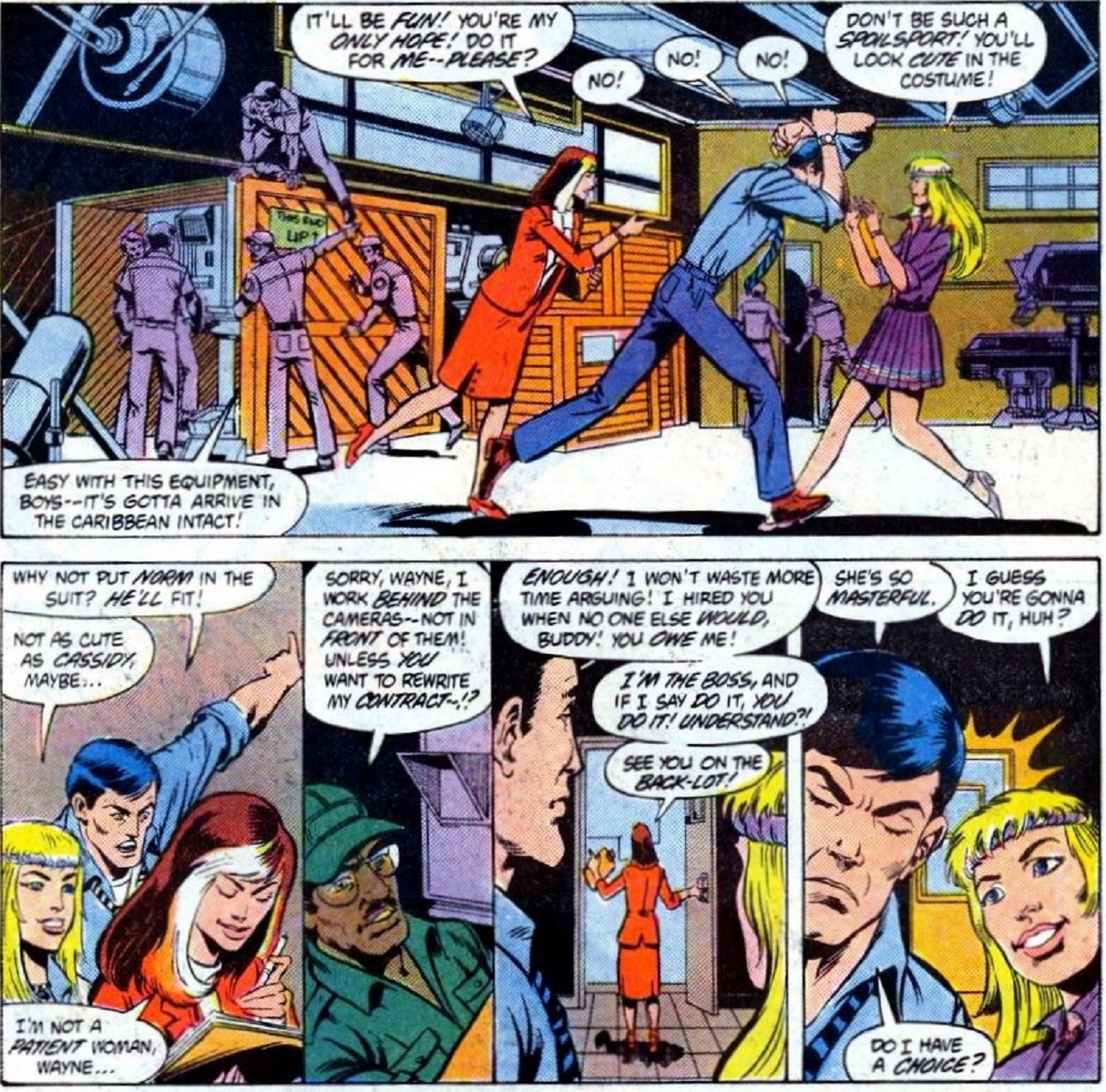 This episode gave us a look at an untold chapter from Daniel Cassidy’s past, as flashbacks revealed the production troubles behind the ‘Blue Devil’ movie, and its prima donna star Wayne Tarrant. Some of you may remember Wayne on the movie poster in episode 2, but this week gave us a better look at the man who altered Dan Cassidy’s career. Wayne first appeared in the ‘Blue Devil’ preview in ‘The Fury of Firestorm’ #24 (written by Dan Mishkin and Gary Cohn, penciled by Paris Cullins), and as you can see from the above image, he was every bit as difficult as he was in the comics. Wayne was a former teen idol who was never able to get his career back on track. During the filming of the ‘Blue Devil’ movie, Wayne and his co-star Sharon accidentally freed the demon Nebiros, who later fused Cassidy into his costume. This means that in both the comic book and television series Wayne is partially responsible for the beginning of Daniel’s heroic journey. 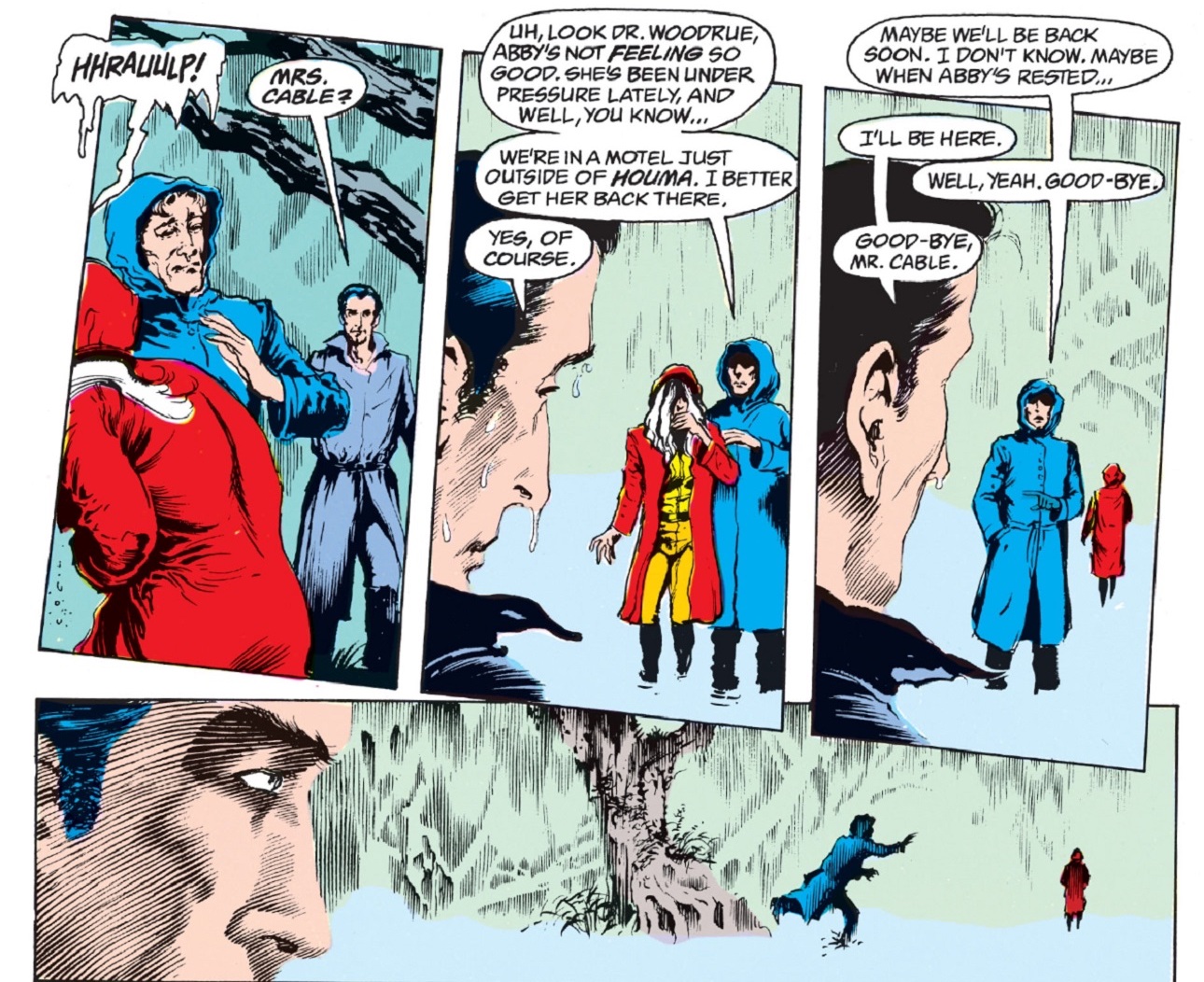 Things got a bit tense between Matt Cable and his mother Lucilia this week, causing the younger officer to consider a transfer to Houma. This was an interesting choice because Houma is the setting for many of Swamp Thing’s comic adventures, and it’s also the city where Matt spent the final years of his life. Marais is a fictional city created for the television series, while Houma is a real Louisiana locale founded in 1834. The original Swamp Thing stories never got specific about where exactly in Louisiana they were set, until ‘The Saga of Swamp Thing’ #22 (written by Alan Moore and penciled by Steve Bissette) referenced Houma for the first time. The people of Houma feared Swamp Thing at first, but after years of him continually saving everyone, they regarded him as a local folk hero. 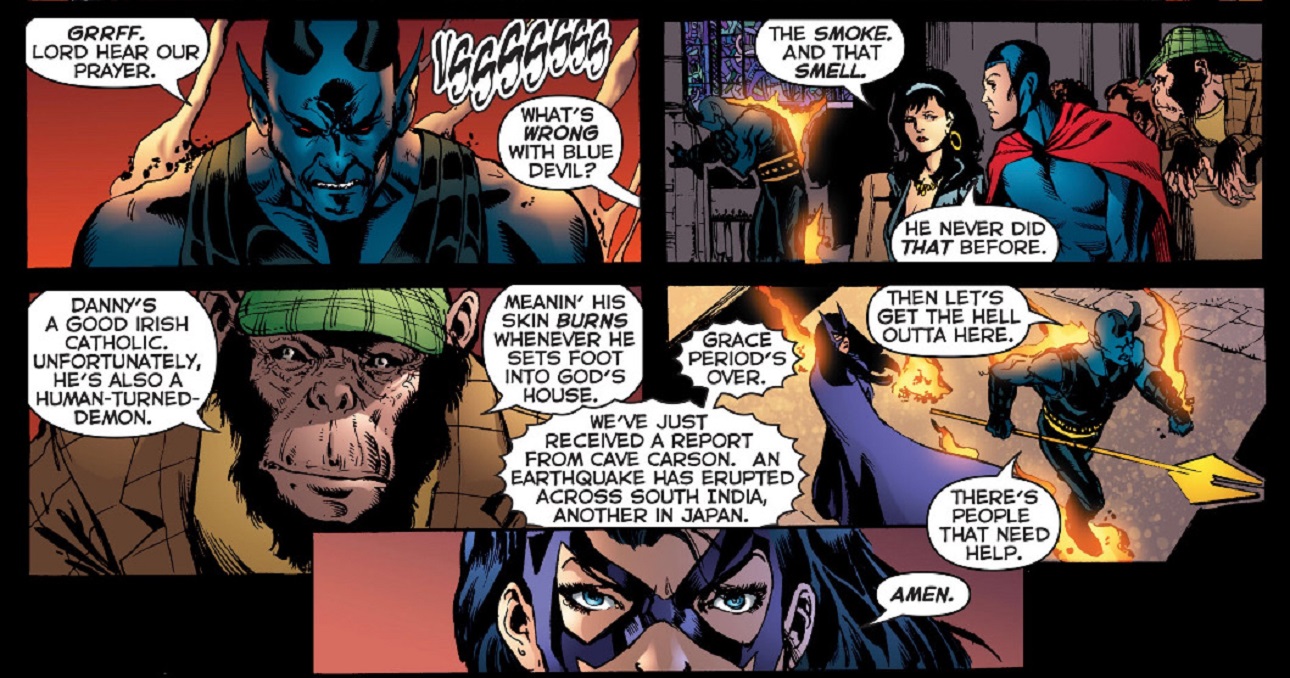 Daniel was not having a good time this episode. Although Dr. Woodrue’s injection was able to wake Daniel from his coma, the actor soon began to suffer as his skin burned. Unfortunately for Daniel, his comic counterpart has experienced similar problems. During the early days of his Blue Devil career, Daniel’s biology was altered to become one with his costume. But after the events of ‘Underworld Unleashed,’ Daniel was reborn as a true demon, which gave him a new set of problems. In ‘Infinite Crisis’ #5 (written by Geoff Johns, penciled by various artists) Detective Chimp notes that Blue Devil cannot set foot in any church without his skin burning up. At least the comics version of Daniel can step outside when this problem arises. The screen version of Daniel has to rely on Woodrue, and knowing how crooked the doctor is, he might be better off taking his chances in the swamp.

The Lady or the Green 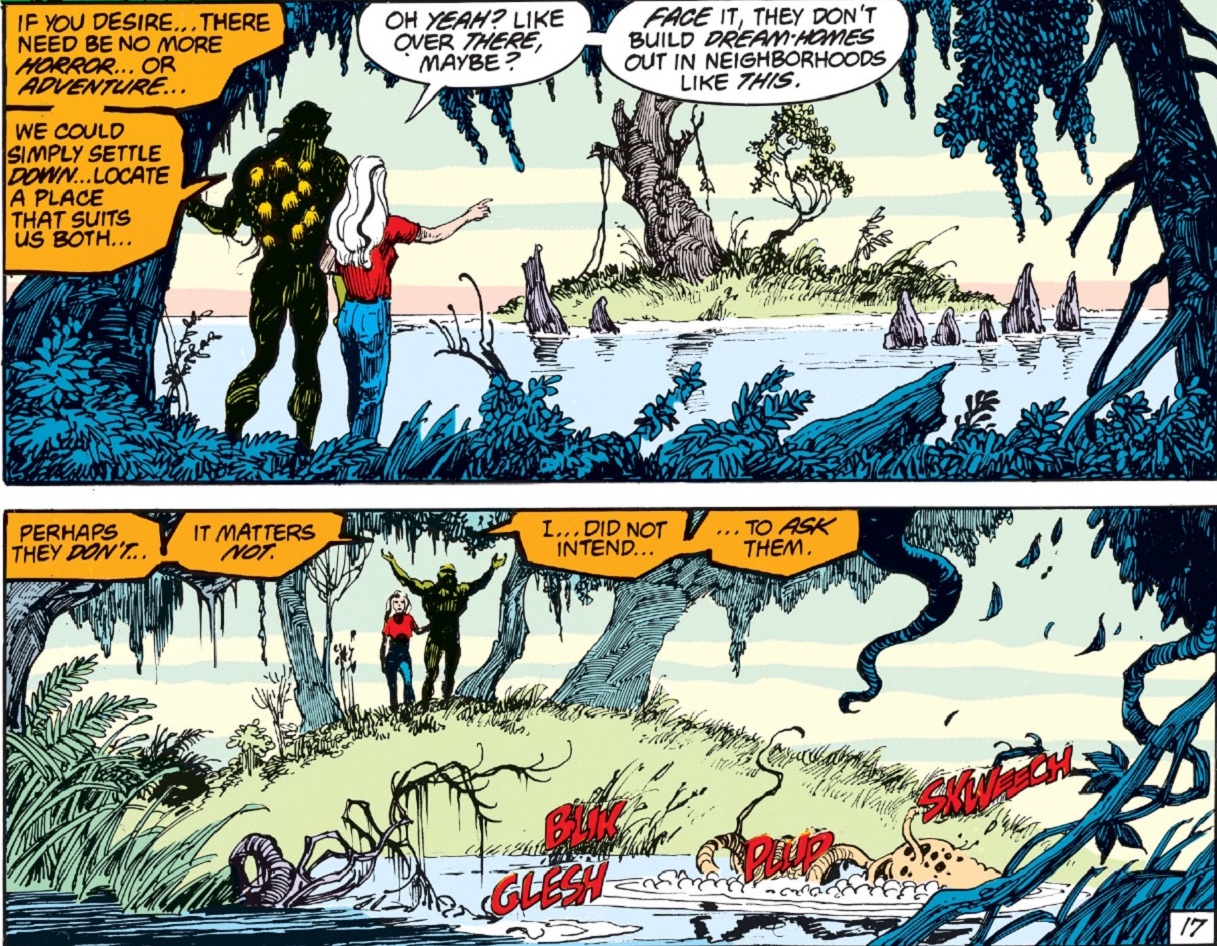 During a conversation with Abby, Swamp Thing said that the Green was calling to him to learn more about his new form but he was hesitant to answer the call, because he didn’t want to be pulled away from Abby. This is one of the central conflicts throughout Swamp Thing’s history, and he’s continually been torn between the call of the Green and his love for Abby. When Swamp Thing first met the Parliament of the Trees in ‘Swamp Thing’ #47 (written by Alan Moore and penciled by Stan Woch) they encouraged him to take root with them, but Swamp Thing refused because he wasn’t ready to leave Abby. In ‘Swamp Thing’ #64 (written by Alan Moore, penciled by various) Swampy decided to turn his back on being the Green’s avatar so he could live a quiet life with Abby. This move infuriated the Parliament. The Green punished Alec in ‘Swamp Thing’ #140 (written by Grant Morrison and Mark Millar, penciled by Phil Hester) by temporarily removing his human consciousness from his body. It’s not easy going up against the forces of nature, but Swamp Thing feels his love for Abby Arcane is worth it.

The secrets of Matt Cable were laid bare this week, as it was revealed he’s a reluctant soldier for Sunderland. Matt doesn’t seem to be thrilled about this arrangement, but when you’re dealing with someone as powerful as Sunderland, what choice do you have? The comic book version of Matt Cable was a victim of the greedy mogul as well. In ‘The Saga of Swamp Thing’ #17 (written by Martin Pasko and penciled by Steve Bissette), Matt recounted how his government superiors contracted Sunderland to take care of “loose ends” from their Swamp Thing investigation. Unfortunately for Matt, this involved his brain being scrambled by Sunderland’s men during painful electroshock therapy sessions. As if that wasn’t bad enough, Sunderland blew up Matt’s home in ‘The Saga of Swamp Thing’ #20 (written by Alan Moore and penciled by Dan Day). It’s clear nothing good can come of Matt working with Sunderland.

Did you catch any cool Easter eggs that we missed? Let us know in our Community!