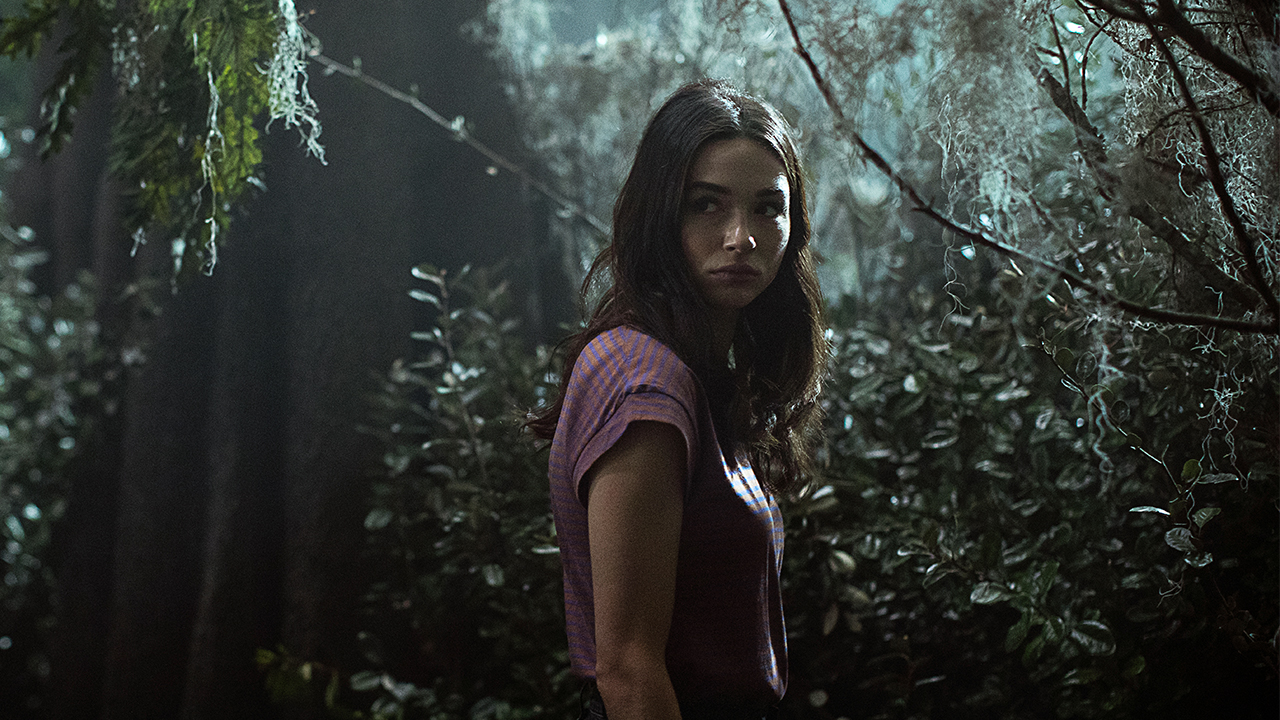 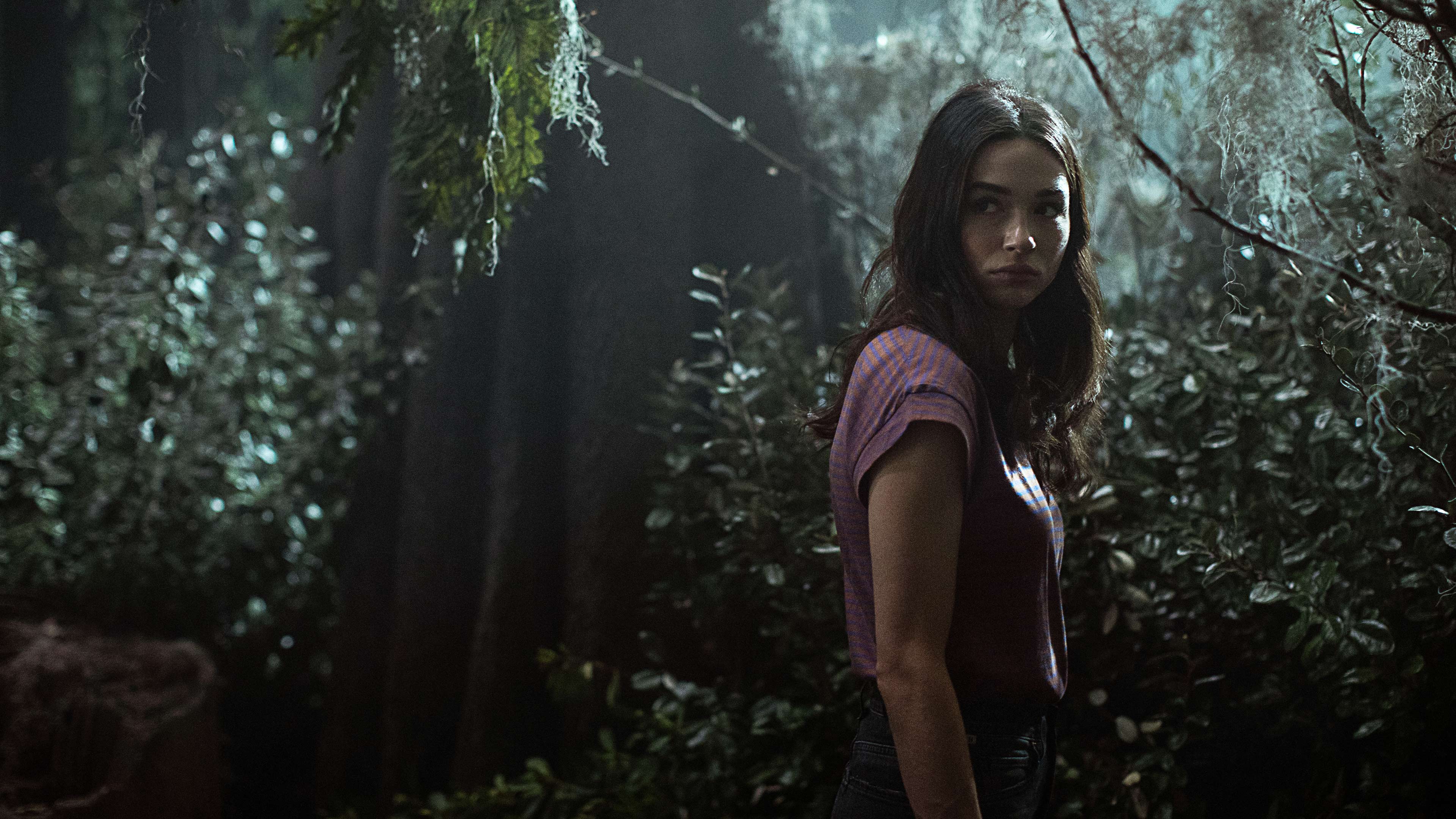 The Comic Book Roots of SWAMP THING Episode 4: “Darkness on the Edge of Town”

The swamps of Marais are growing darker, and the whole town is in danger of succumbing to their evil influence. In this week's episode of DC Universe's ‘Swamp Thing’, “Darkness on the Edge of Town,” a force known only as the Darkness warped the minds of everyone who it came into contact with. Swamp Thing and Abby Arcane were able to contain the Darkness, but not before it did some fatal damage to the citizens of Marais. The ordeal was very trying, and along the way viewers were shown some interesting Easter eggs from Swamp Thing’s rich comic history. Here are the comic book roots of this week’s episode…. 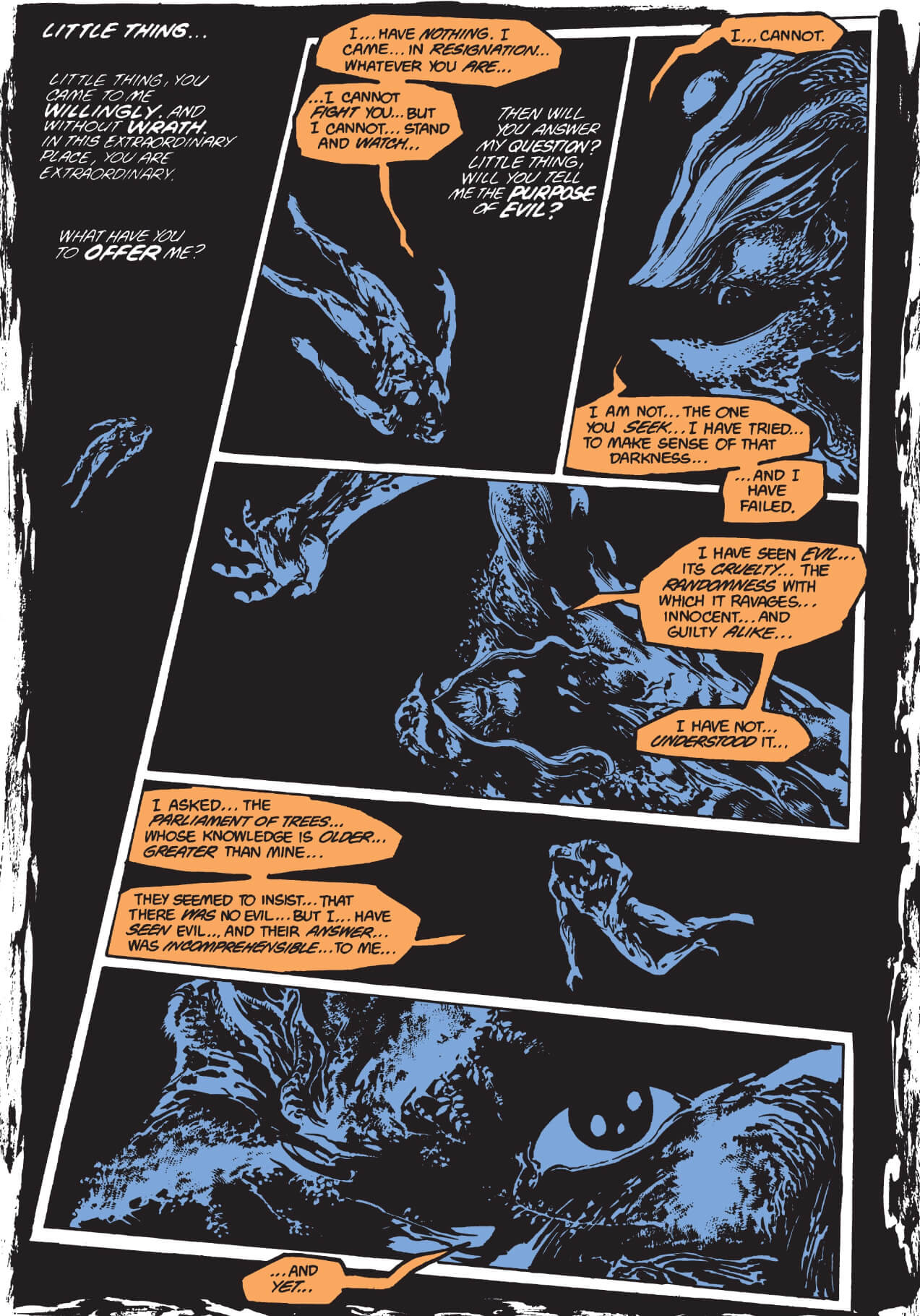 The Darkness is a concept from writer Alan Moore’s groundbreaking run on Swamp Thing. The evil force worked a bit differently in the comics, although it was just as menacing. In the original storyline, the Great Darkness was a near omnipresent being of pure evil. When John Constantine first encountered Swamp Thing and began helping him understand his true powers and origins, it was done for the purpose of one day opposing the Great Darkness. The storyline culminated in ‘Swamp Thing’ #48-50, in which Swamp Thing and a host of other supernatural heroes teamed up to take the Darkness down. Powerhouses like the Spectre and Dr. Fate were unsuccessful, but Swamp Thing was able to save the day by convincing the Darkness that good and evil must co-exist in order to keep the universe balanced. The Darkness reached its hands to the Almighty in Heaven and merged, creating a new balance in the universe. It’s admittedly a bit less grotesque then scratching a corpse in the swamp, but hey, it solved the problem with minimal casualties. 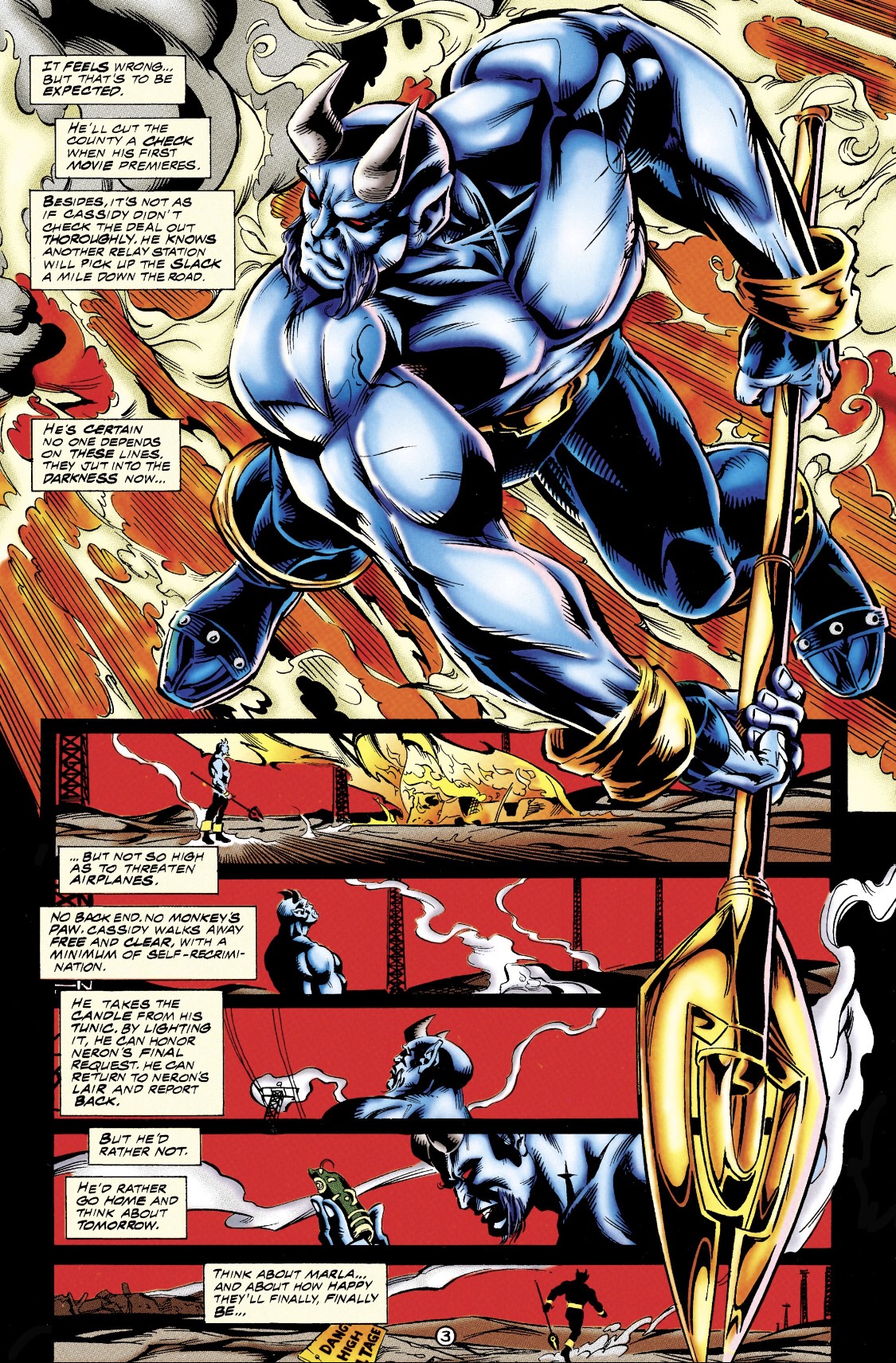 The mystery of Dan Cassidy’s mission was slowly unraveled this week, as the washed-up actor spoke of a mysterious bargain that binds him to Marais. Is it possible he's made a deal with a devil in exchange for fame and fortune? The idea may seem far-fetched, but Cassidy did make a similar bargain in the comics. Years after becoming the superhero Blue Devil, Cassidy was still trying to revitalize his acting career. He had even been granted membership in the Justice League of America, but that still left him feeling unfulfilled. He longed to revive his Hollywood career, and one day a demon came to offer him a chance. In ‘Underworld Unleashed’ #2 (written by Mark Waid and penciled by Howard Porter), the demonic Neron approached Cassidy and offered him fame and fortune, on the condition that he destroy an empty relay station in a desolate area. Although Cassidy was aware of the dangers of such Faustian deals, the allure of Hollywood was too tempting, and he agreed. Unfortunately, the destruction of the relay station led to a series of events that caused a helicopter to crash, killing Cassidy’s longtime friend and manager Marla Bloom. The news devastated Cassidy, who cursed himself for agreeing to the deal. It sounds like our screen version of Daniel may have made a similar bargain, but will he regret it when the other shoe drops?

The Face of Abby’s Nightmares 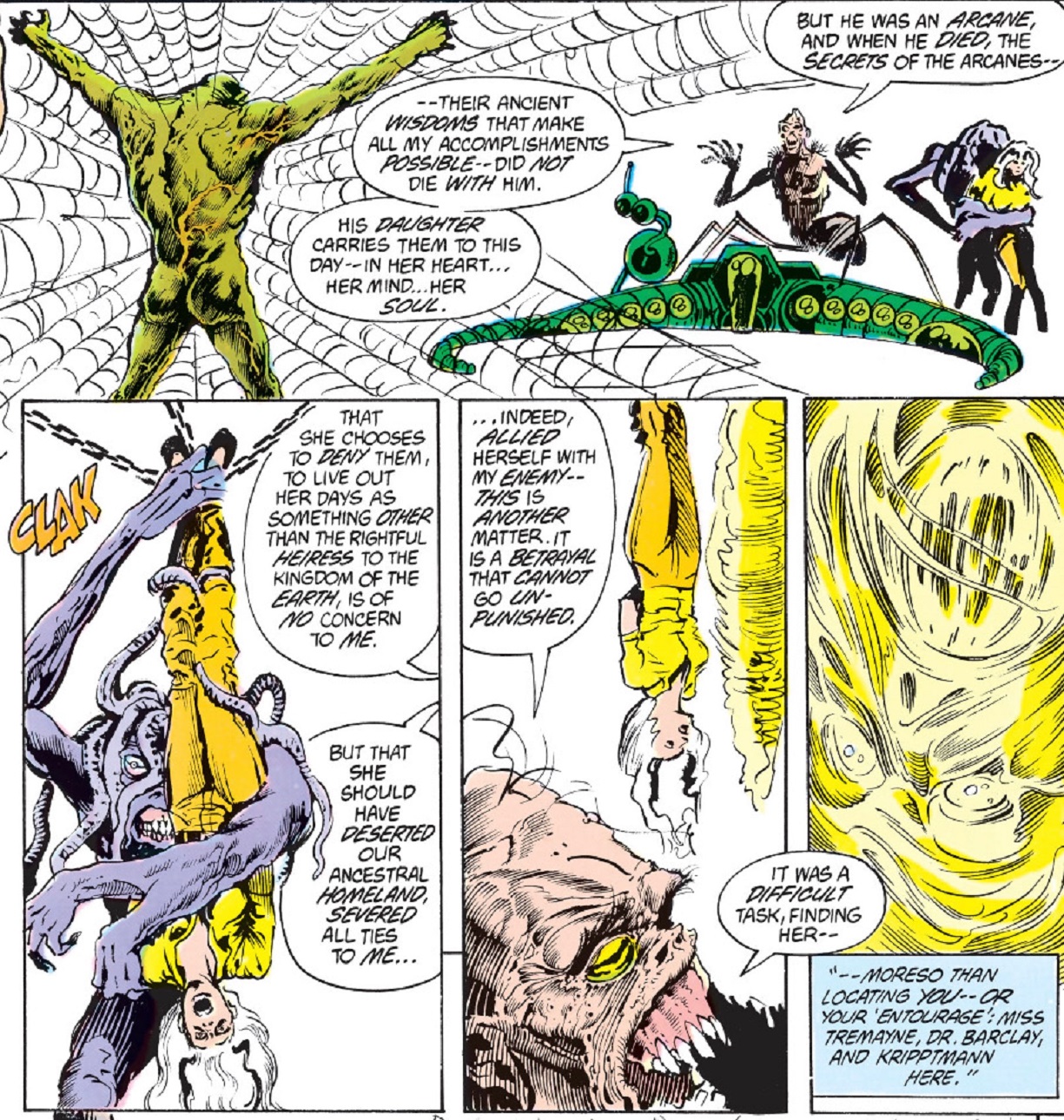 While she was infected with the Darkness, Abby had nightmarish visions of a shadowy man pursuing her. The man promised Abby her mother couldn't keep him away, as she tried fighting him off. Once the Darkness left her body, Abby couldn’t identify the man, knowing only that he was from her childhood nightmares. While the identity of the man Abby saw is still up for debate, heavy evidence points to her uncle Anton Arcane, who has constantly tormented her in the comics. The two characters shared their first scene together in ‘The Saga of Swamp Thing’ #19 (written by Martin Pasko and Steve Bissette, penciled by Steve Bissette) where the demonic Arcane takes great pleasure in torturing Abby. Anton resents Abby for turning her back on their family heritage, but he doesn’t seem like the type of guy who needs a reason to be a jerk. In ‘The Saga of Swamp Thing’ #29 (written by Alan Moore and penciled by Steve Bissette), Abby discovers her uncle Anton has been using the body of her husband Matt Cable as a vessel. The incestuous implications nearly drive Abby mad, and her uncle raises the stakes by sending her to Hell. Swamp Thing is able to rescue her, but the experience takes a toll on Abby, who lives in fear of her uncle. If the screen version of Anton is anything like his comic counterpart, it would explain why Abby was running away in terror. 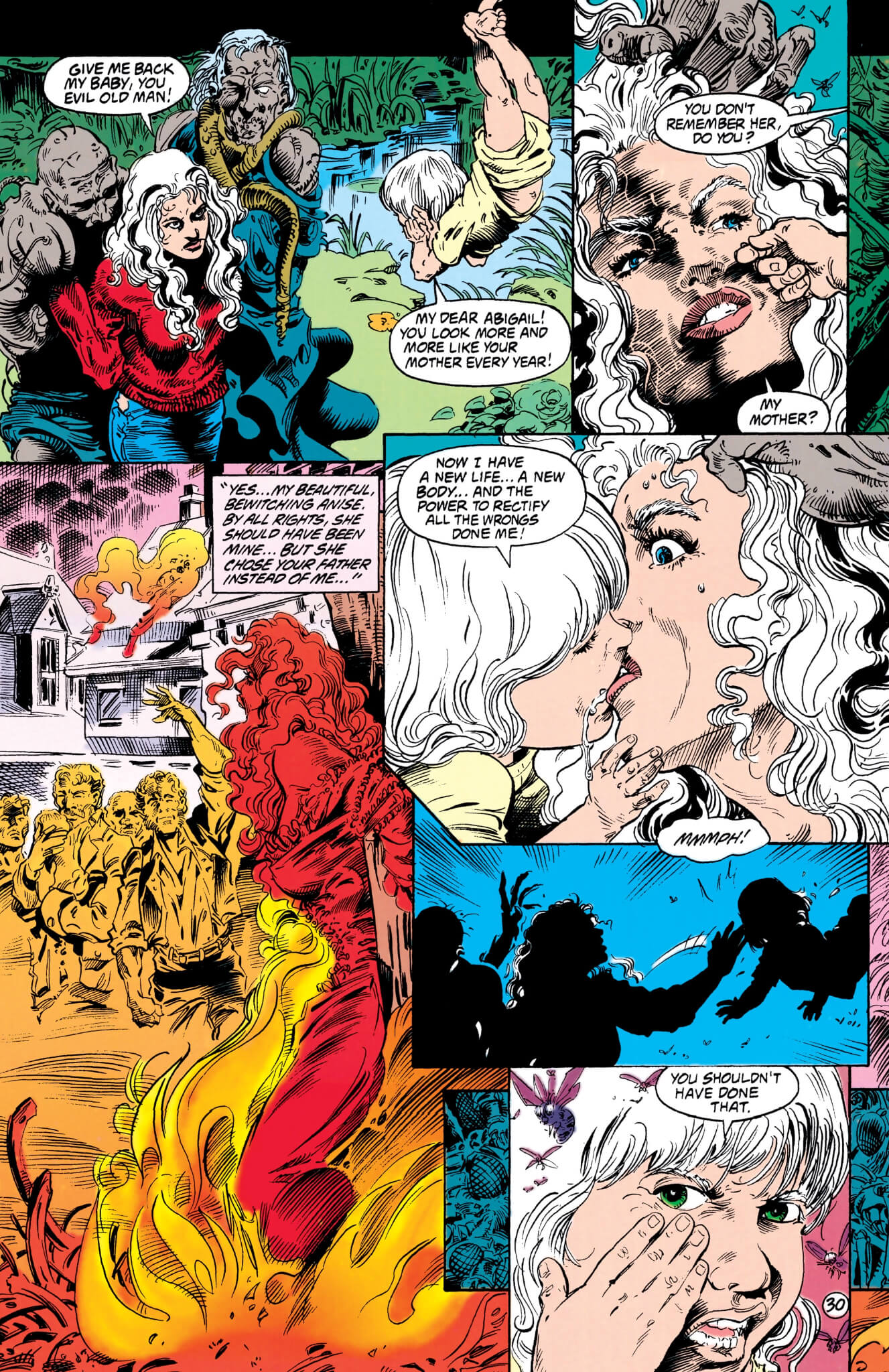 Abby’s nightmare may have been horrific, but it gave viewers some clues to her mysterious backstory. We know she lived with the Sunderlands, and left Marais under bad circumstances, but we don’t know much about her true origins. It appears she remembers her real mother, who was mentioned here for the first time. While we don’t know what happened to Abby’s mother in this version of the story, if it’s anything like the comics then it wasn’t very nice. In ‘Swamp Thing’ #125 (written by Nancy A. Collins and penciled by Scot Eaton), we learn that Anton Arcane convinced the citizens of his European village to burn Abby’s mother Anise at the steak. Anton had fallen for Anise and was angered when she chose his brother Gregori instead. Poor Abby was there to witness the execution, even though she was only a baby. When Abby’s origins were updated for DC’s New 52 reimagining, her mother was still killed when she was a baby -- but this time it was Abby who killed her!  The truth was revealed in ‘Swamp Thing’ #10 (written by Scott Snyder and penciled by Francesco Francavilla) as baby Abby accidentally accessed the elemental forces of the Rot. Since she was an infant, she was unable to control the deathly powers, and accidentally killed her own mother. The truth about Abby’s television mother remains unknown, but, given the precedent, it’s a safe bet her fate wasn’t pleasant.

Did you catch any Easter eggs we missed in this episode? Let us know in our Community!