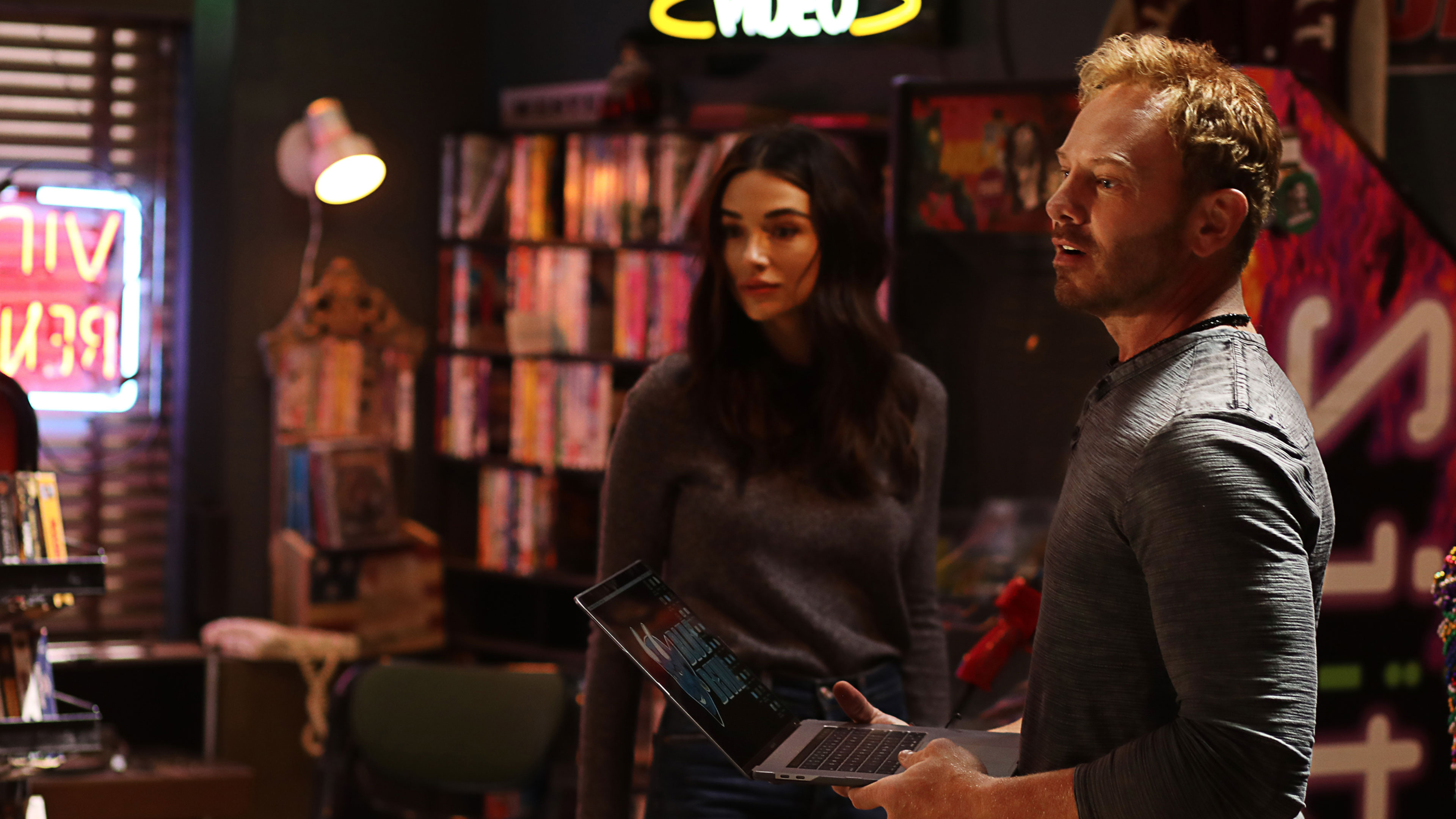 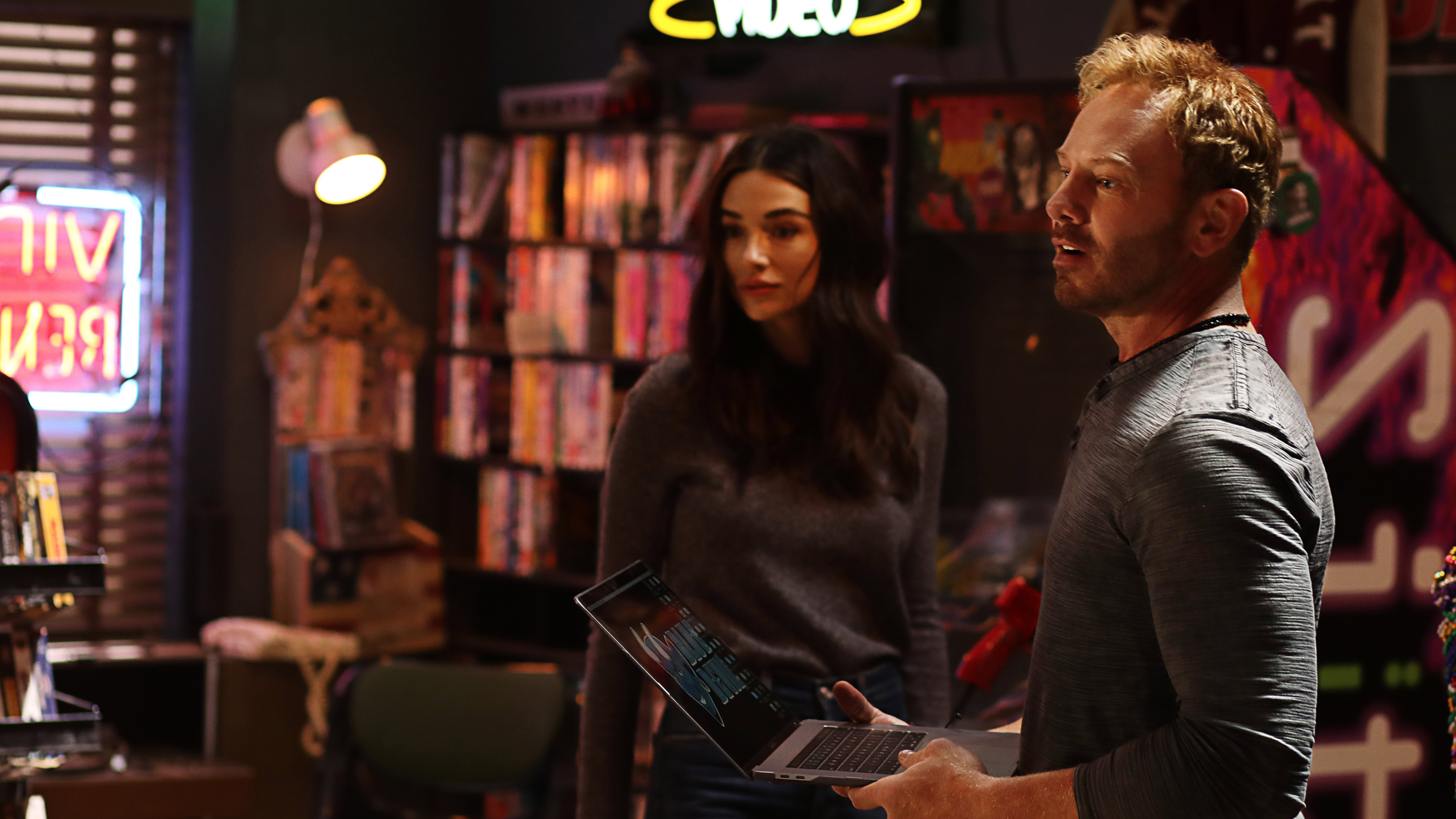 Something strange is going on in the swamps of Marais, and the mystery deepens in the second episode of DC Universe's ‘Swamp Thing’, “Worlds Apart.” Abby Arcane tries to uncover the truth over what happened to her friend Alec Holland, and her investigation reveals some interesting comic book references. Here are a few of the original comic book stories that inspired the show's latest episode... 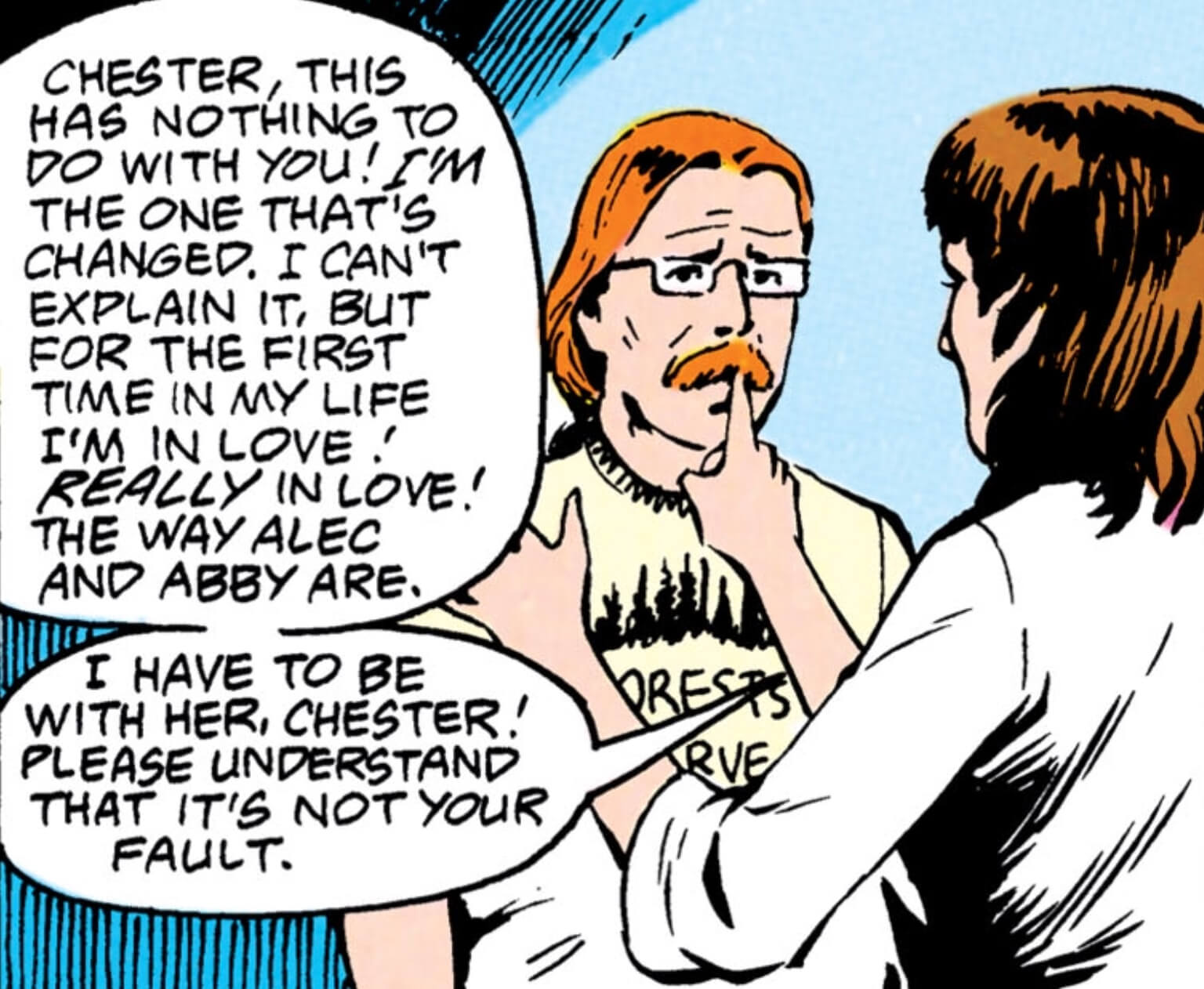 After spending the night at Liz’s house, Abby was surprised to find one of her friend’s romantic partners in the kitchen the next morning. Margaux introduced herself to a flustered Abby, who appeared to have been unaware of Liz’s taste in romantic partners. Liz is very comfortable with her sexuality, which was something she had to come to terms with in the comics. Liz’s comic counterpart had befriended a woman named Barb while working at a rape crisis hotline and was shocked to realize she was falling in love with her. Liz was torn about hurting her boyfriend Chester, but her new love for Barb was so strong that she left Louisiana to start a new life with her in ‘Swamp Thing' #112 (written by Nancy A. Collins and penciled by Tom Yeates). The world of Swamp Thing is filled with unspeakable horror and tragedy, so it's heartening to know that love still has a chance on the bayou. 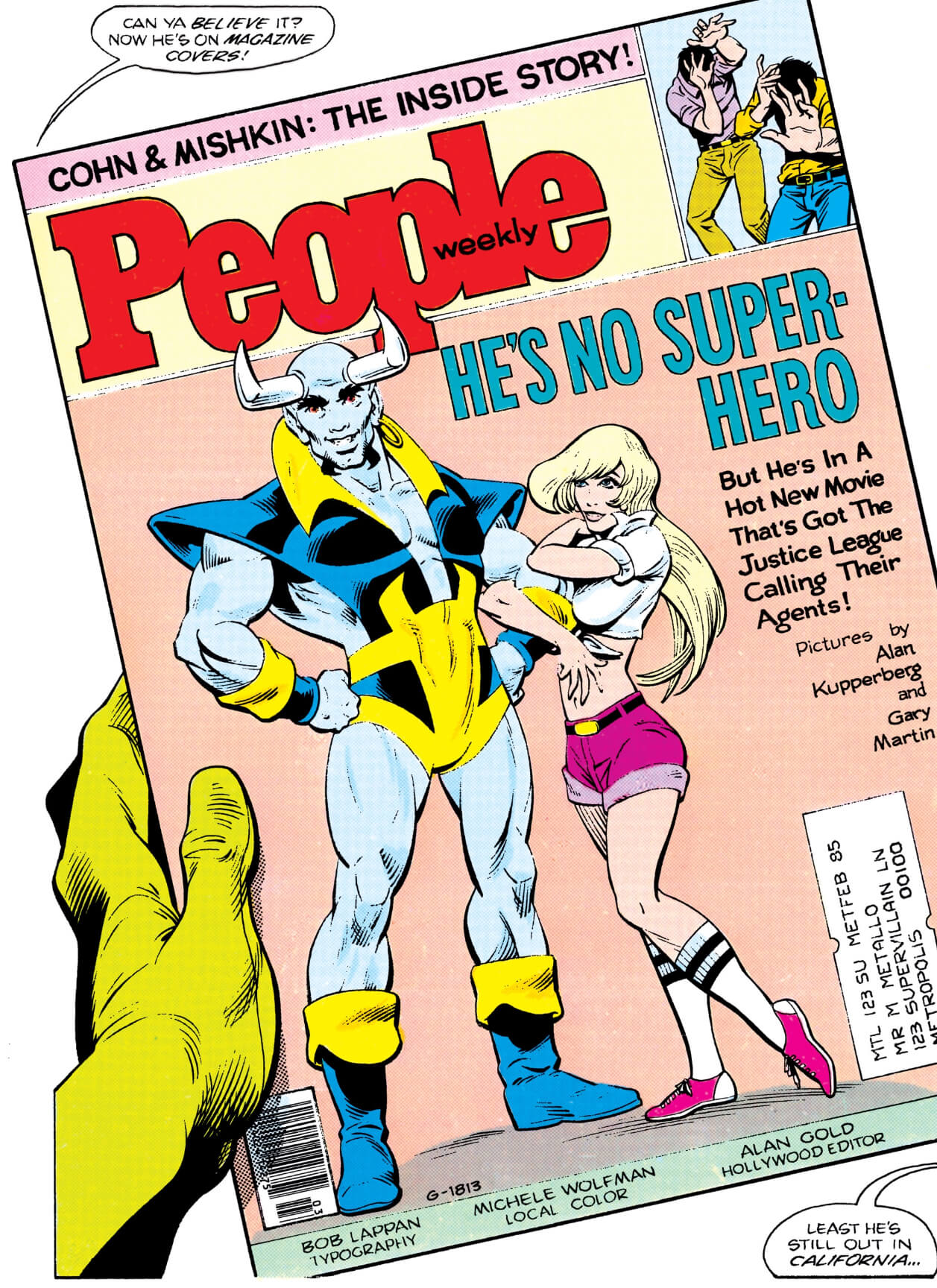 Abby’s visit to Dan Cassidy’s video store unearthed a treasure trove of Easter eggs! Dan appears to be reliving his glory days from the movie ‘Blue Devil’, as evident by his desktop background and the poster he enthusiastically offers to Abby. The poster has a few cool Easter eggs on it, including the villain Bolt! Bolt is featured at the bottom of the poster, and he’s a former special effects artist who designed his own criminal super suit. Bolt’s first appearance can be found in ‘Blue Devil #6’ (written by Dan Mishkin, Gary Cohn, and Robert L. Fleming, penciled by Paris Cullins and Denys Cowan). The blonde bombshell hiding behind Blue Devil is Sharon Scott, leading lady and former girlfriend of Dan Cassidy. She first appeared, along with Blue Devil himself, in ‘The Fury of Firestorm #24’ (written by Dan Mishkin and Gary Cohn, penciled by Paris Cullins). Sharp-eyed viewers may have also noticed the name Wayne Tarrant on the poster. Wayne was a former teen idol singer who became a Hollywood actor. He was a friend of Dan Cassidy’s, but he also fancied himself a romantic rival for Sharon’s affections. The Blue Devil movie finally got its premiere in ‘Blue Devil #12’ (written by Dan Mishkin and Gory Cohn, penciled by Alan Kupperberg) and if we’re to believe Dan Cassidy’s bragging, then the Rotten Tomatoes score was pretty good. 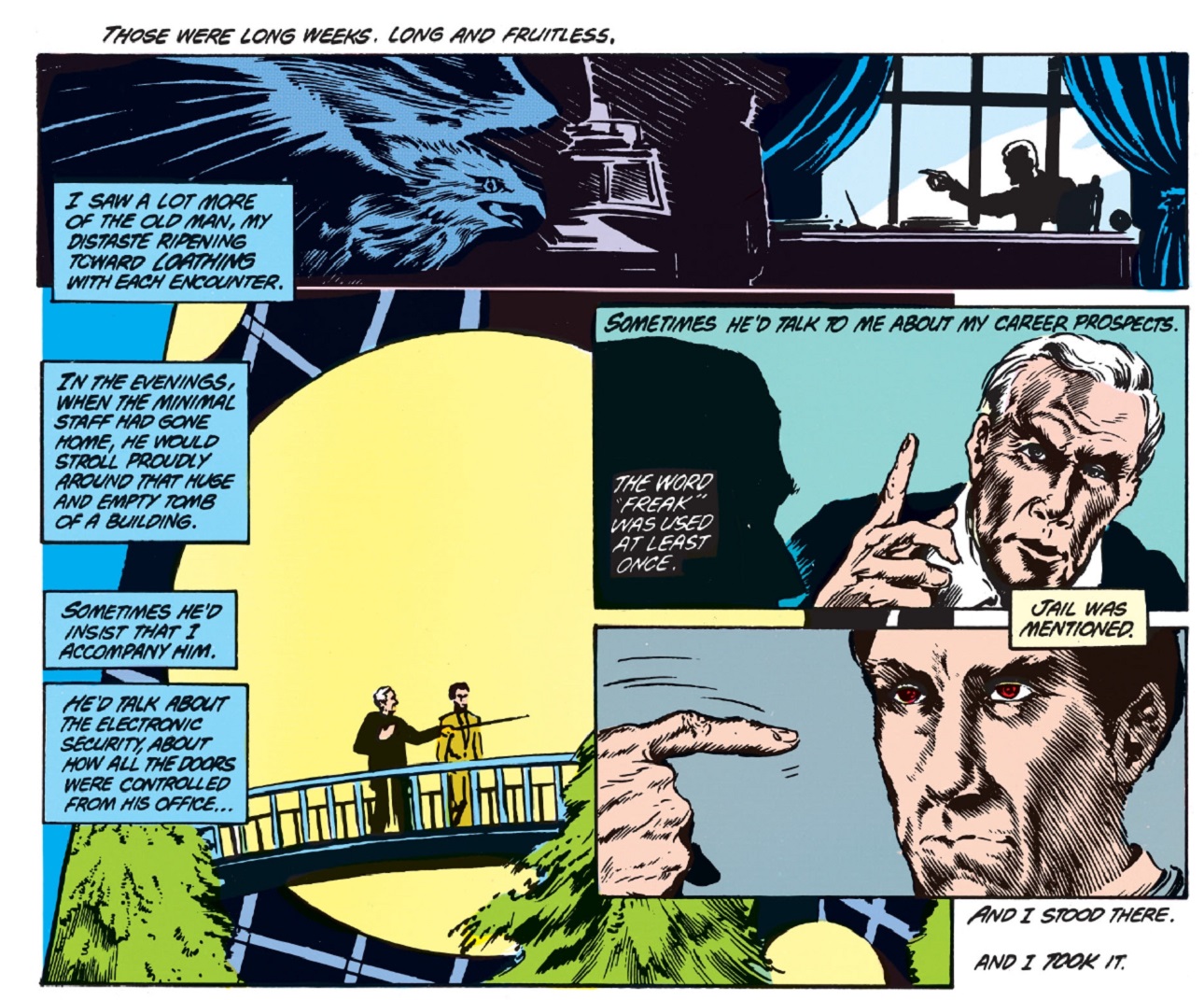 This week, an angered Sunderland summoned Dr. Woodrue to explain the outbreak that had been plaguing the people of Marais. The employer/employee relationship seems to be tense, as Sunderland is more concerned with power and self-interest. Woodrue has his own problems with arrogance, but his focus seems to be the pursuit of plant-based sciences. Either way, the two men don’t see eye to eye and this working relationship might not have a good ending. The comic book version of Sunderland hired Woodrue in ‘The Saga of Swamp Thing' #21 (written by Alan Moore and penciled by Steve Bissette), and continually disrespected him. Woodrue’s hatred for Sunderland grew, until the greedy mogul fired him. Upon his dismissal, Woodrue freed Swamp Thing, who had been imprisoned in Sunderland’s lab. Woodrue knew the angry creature would turn its rage on Sunderland. In the end, Swamp Thing killed Sunderland with his bare hands, but Woodrue can claim partial responsibility for the murder. Perhaps the television version of Sunderland should be careful with how he treats his employees, unless he wants to suffer a similar fate. 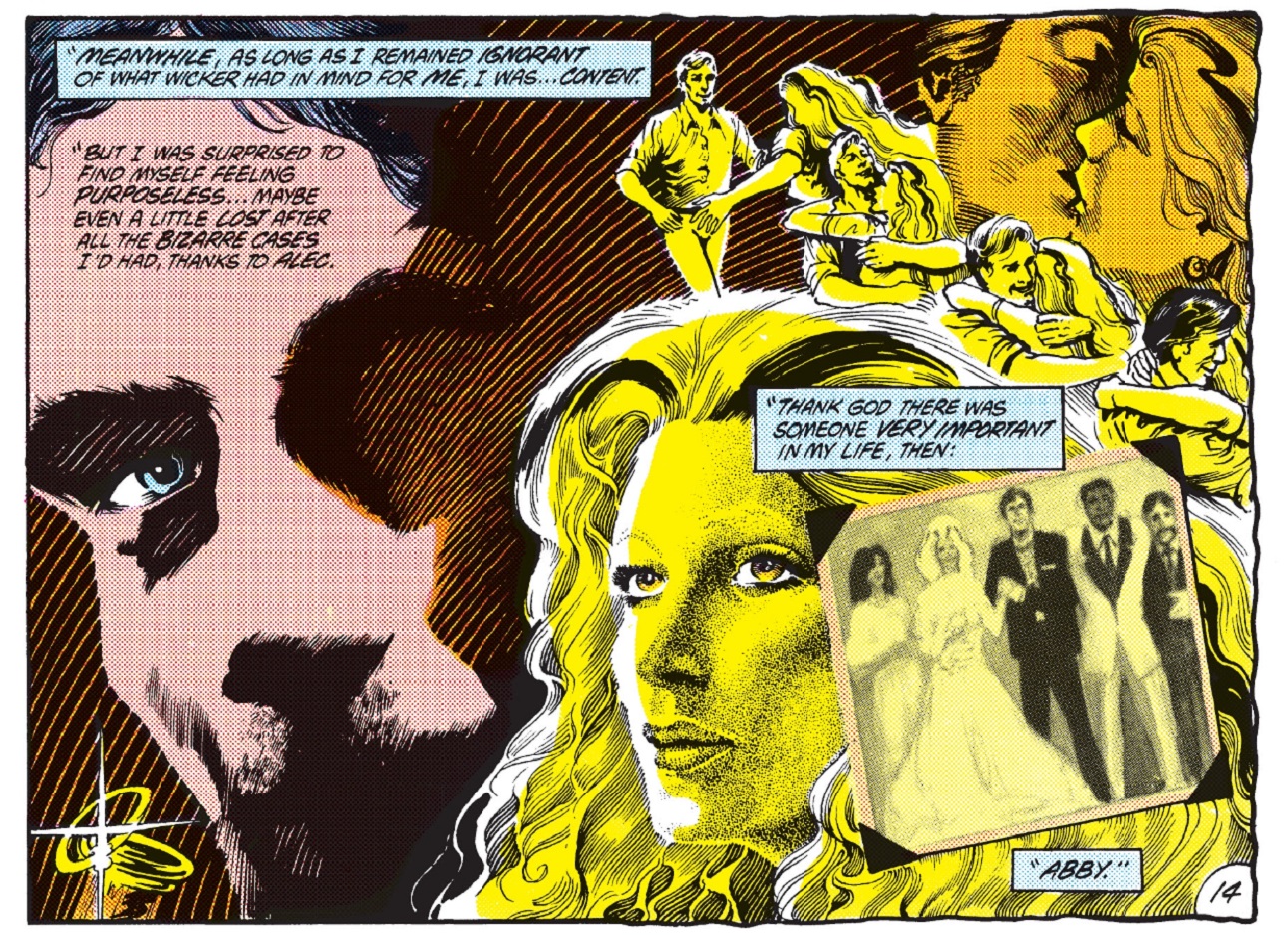 While searching for the missing Susie Coyle, Matt Cable sheepishly admits that he harbored a crush on Abby during their high school days. If, however, we’re to believe the warnings of his mother, Matt might still carry some intense romantic feelings for her. Matt’s comic-book counterpart did have a romantic relationship with Abby, but it was full of many trials and tribulations.

Abby and Matt first met in 1972's ‘Swamp Thing #3’ (written by Len Wein and penciled by Bernie Wrightson) when he tracked Swamp Thing to Abby's Balkan village. After the loss of her family, Abby sought adventure and more purpose in life, so she decided to join Matt on his hunt for Swamp Thing, though the duo eventually befriended the creature. When Swampy caught up with the two in ‘The Saga of Swamp Thing #17’ (written by Martin Pasko and penciled by Steve Bissette), he learned that Abby and Matt had fallen in love and gotten married. Unfortunately, Matt knew too many government secrets, so his brain was scrambled in order to neutralize him. Matt’s fragile state of mind put a strain on his marriage to Abby, leaving him open to be used as a vessel for the evil Anton Arcane. After the villain was defeated, Cable’s withered body went into a coma. Abby began an unusual romantic relationship with Swamp Thing but continued to visit Matt and grieved for the marriage that was destroyed. After watching from limbo and realizing that by clinging to the last shreds of his life he was ruining what remained of Abby's life, Matt awoke from his coma long enough to pull the plug on himself in ‘Swamp Thing #84’ (written by Rick Veitch and penciled by Tom Mandrake).

Did you catch any comic book references we missed this week? Let us know in our Community!