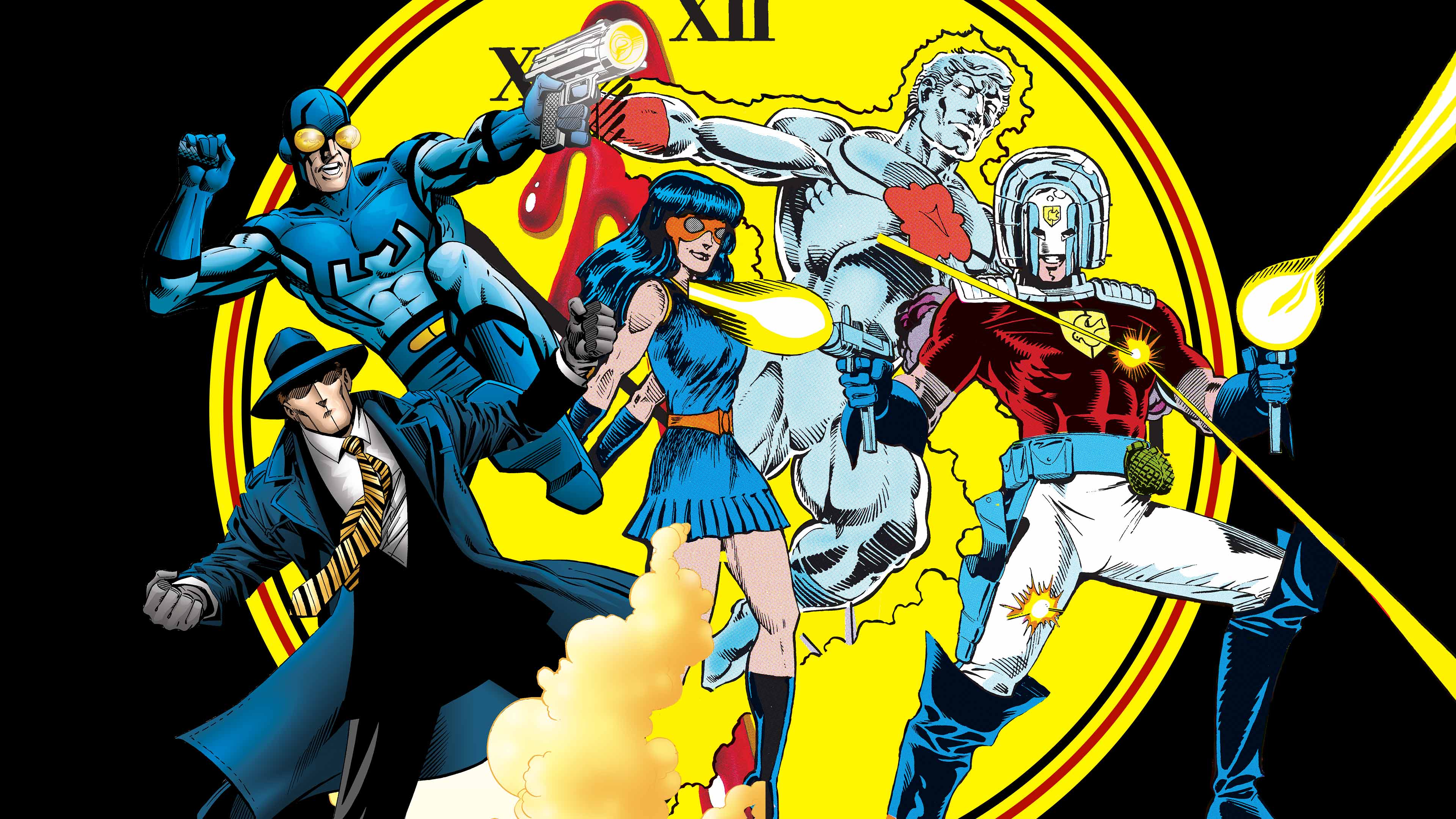 Tick. Tock. Tick. Tock. With each passing minute, we inch ever closer to the premiere of the Watchmen HBO series this Sunday, October 20th. Before watching, series creator Damon Lindelof wants you to know that this “remix” of the Alan Moore classic which redefined the comic book medium is by no means a direct adaptation: rather, something entirely new, inspired by that which came before.

Incidentally, the same can be said of Alan Moore’s Watchmen itself. In the 1980s, DC had just acquired a rather eclectic stable of Super Heroes from the defunct Charlton Comics. Alan Moore’s original Watchmen pitch was one which involved those new acquisitions… though in the final draft, each character was transmuted into a new creation, separated from the main line of DC continuity so it could live and breathe on its own merits. But at the core of each of those iconic characters, there still remains a Super Hero who inspired them… Super Heroes you can get to know for yourself right here on DC Universe. 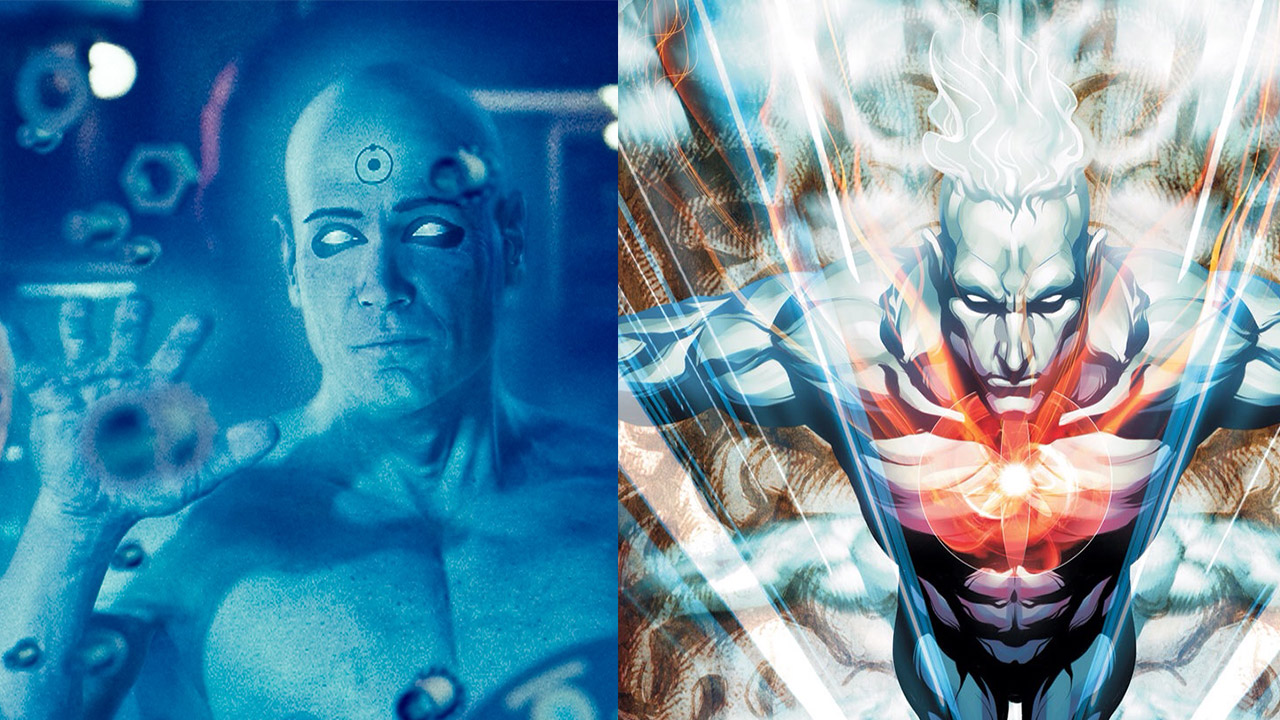 In Watchmen, the all-powerful Doctor Manhattan draws his inspiration directly from the wide-eyed awe of atomic power which defined the sci-fi landscape of the Silver Age. The story itself draws clear parallels between Doctor Manhattan and Superman, which were recently elaborated upon by Geoff Johns and Gary Frank’s Doomsday Clock. But more directly, Doctor Manhattan is inspired by Captain Atom, the flagship Super Hero of the Charlton Comics line who gained his powers in a quite similar freak accident. Some of those original Captain Atom stories can even be read right here.

THE OTHER DIRECTION: Instead of granting Alan Moore direct access to Captain Atom, the character was launched to support his own solo title which ran for over 50 issues… all under the pen of Greg Weisman, who would later go on to become one of the co-runners of the Young Justice animated series. 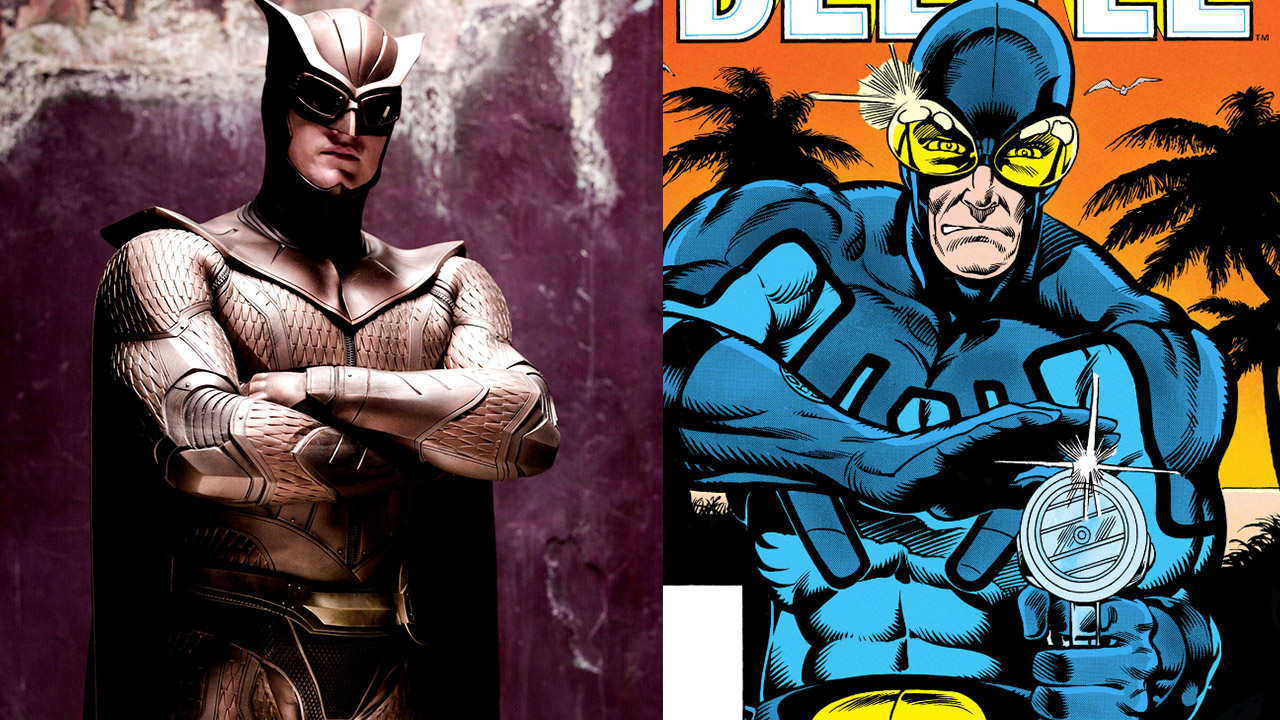 The gadget loving, lovelorn, and all too relatable Nite-Owl draws direct inspiration from Blue Beetle, a character whose origins actually go back to the 1940s. Like the Blue Beetle of the Charlton era, Nite-Owl was a street-fighting hero who inherited his mantle from an older mentor, continuing the good fight in his name. Nite-Owl was designed as part of Watchmen's treatise on the concept of legacy which defines so much of the generation-spanning heroic landscape, from heroic mantles to the creative teams behind them. Some of this Blue Beetle’s earliest adventures can also be found in the ‘60s Captain Atom series here on DC Universe.

THE OTHER DIRECTION: After Blue Beetle was changed to Nite-Owl, Len Wein helmed a solo Blue Beetle series for 24 issues before famously linking up with BFF Booster Gold in Justice League International. Then, in 2006, the legacy was passed on once more to Hispanic-American teenager Jaime Reyes in the 2006 Blue Beetle series. 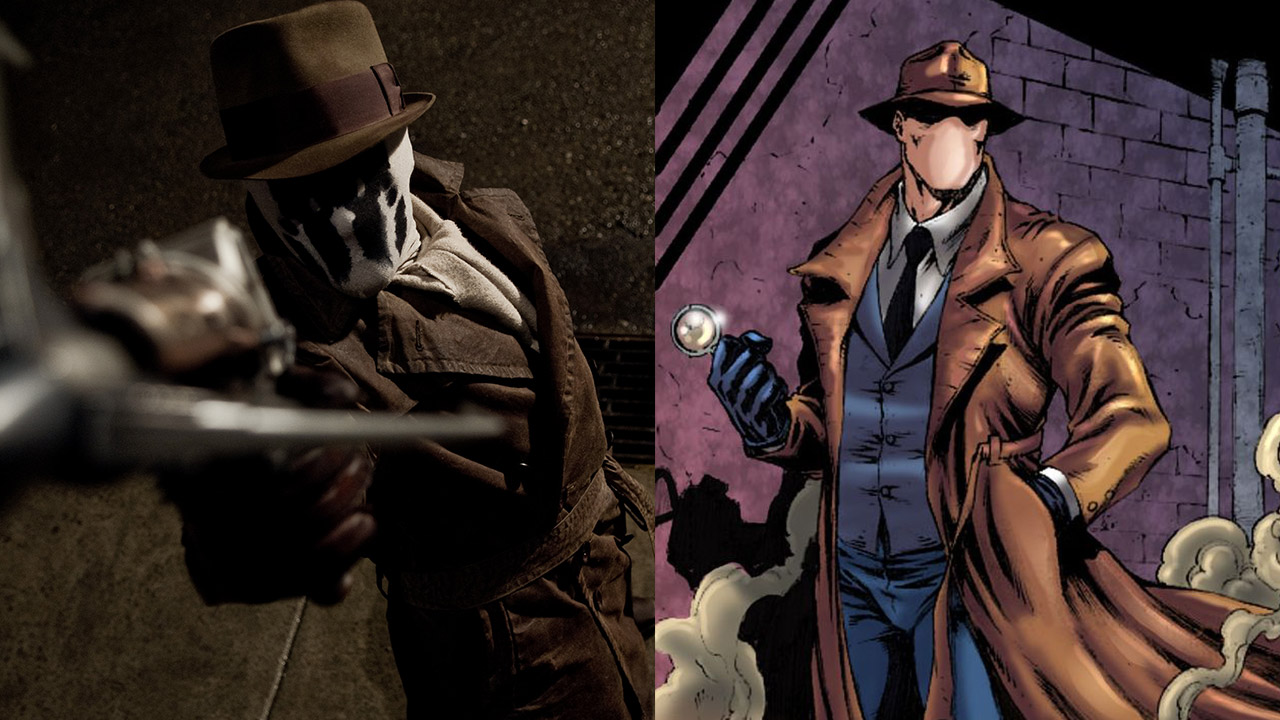 Even in the 1980s- perhaps especially so- Batman was such a big character in the comic book landscape that Moore deemed it necessary to divide him up between two different characters. Batman’s humanity was expressed through Nite-Owl; but his dogged, uncompromising mission and morality took hold in Rorschach, Watchmen's controversial anti-hero. But Rorschach himself draws a more direct parallel to The Question, an equally iconoclastic hero designed by Steve Ditko for Charlton’s Super Hero line. Heavily inspired by the tenets of objectivist philosophy, the original incarnation of The Question which formed the basis for Rorschach believed in a clear line between right and wrong which could never be crossed, with no room for shades of grey — as symbolized in Watchmen itself by the stark black and white contrast of Rorschach’s mask.

THE OTHER DIRECTION: Dennis O’Neil relaunched The Question in his own solo series, with a story that dramatically expanded the character’s once-limited worldview… by killing him in the first issue. What followed was what some consider to be one of the greatest and most underappreciated comic book runs in DC history. On the next rain heavy midnight of your soul where the veil between dream and waking feels at its thinnest, open up this book and start asking Questions. 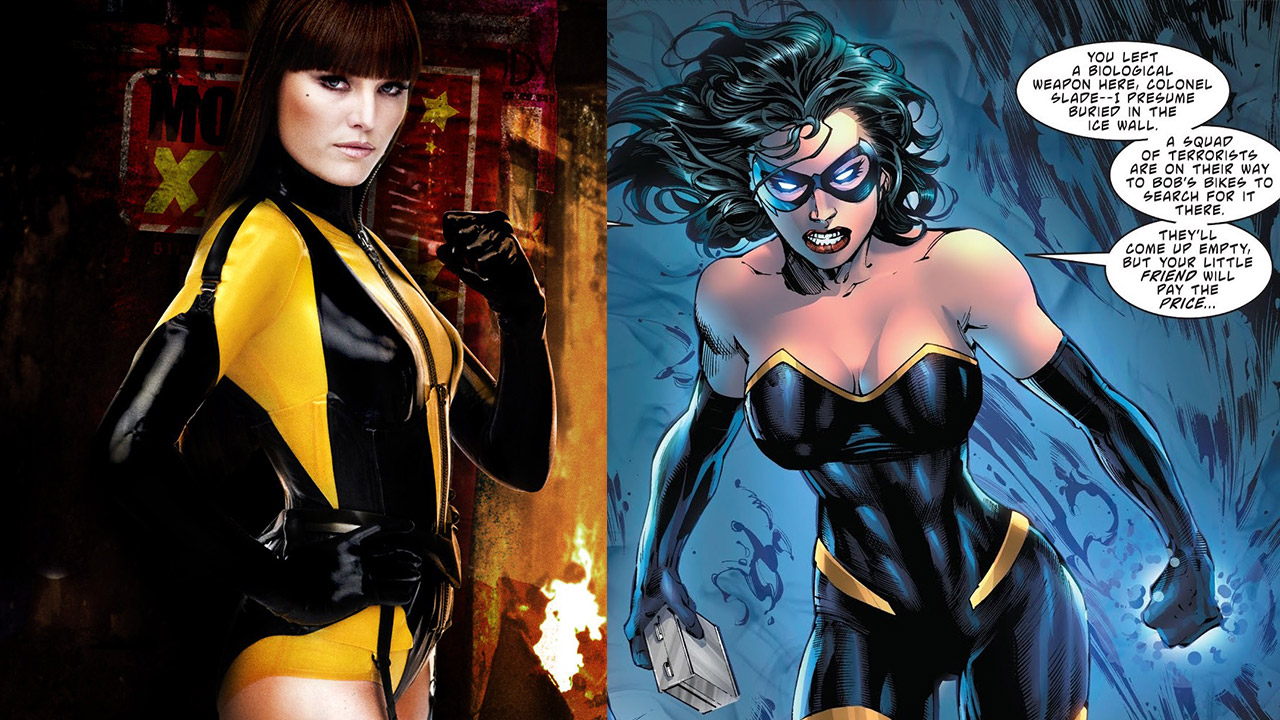 The connection between Silk Spectre and Charlton’s Nightshade is the most tenuous, though that is where the character started. Nightshade was originally introduced as crime-fighting and romantic partner to Captain Atom, which is quite similar to the arrangement in which we first find Silk Spectre, caressed by the many arms of Doctor Manhattan. But a more direct parallel can be found between Silk Spectre and Black Canary, who at the time was considered a legacy hero following in the footsteps of her Golden Age mother. In Watchmen, Silk Spectre is the flip-side of the legacy concept as expressed by Nite-Owl: the burden of legacy foisted upon the child, as opposed to that sought out by those the mantle inspires.

THE OTHER DIRECTION: Nightshade has yet to score her own solo series, but she was drafted soon after DC’s acquisition into the first wave of the Suicide Squad — and years later fought alongside Shadowpact, a magic-wielding Super Team and erstwhile prototype to the modern Justice League Dark. 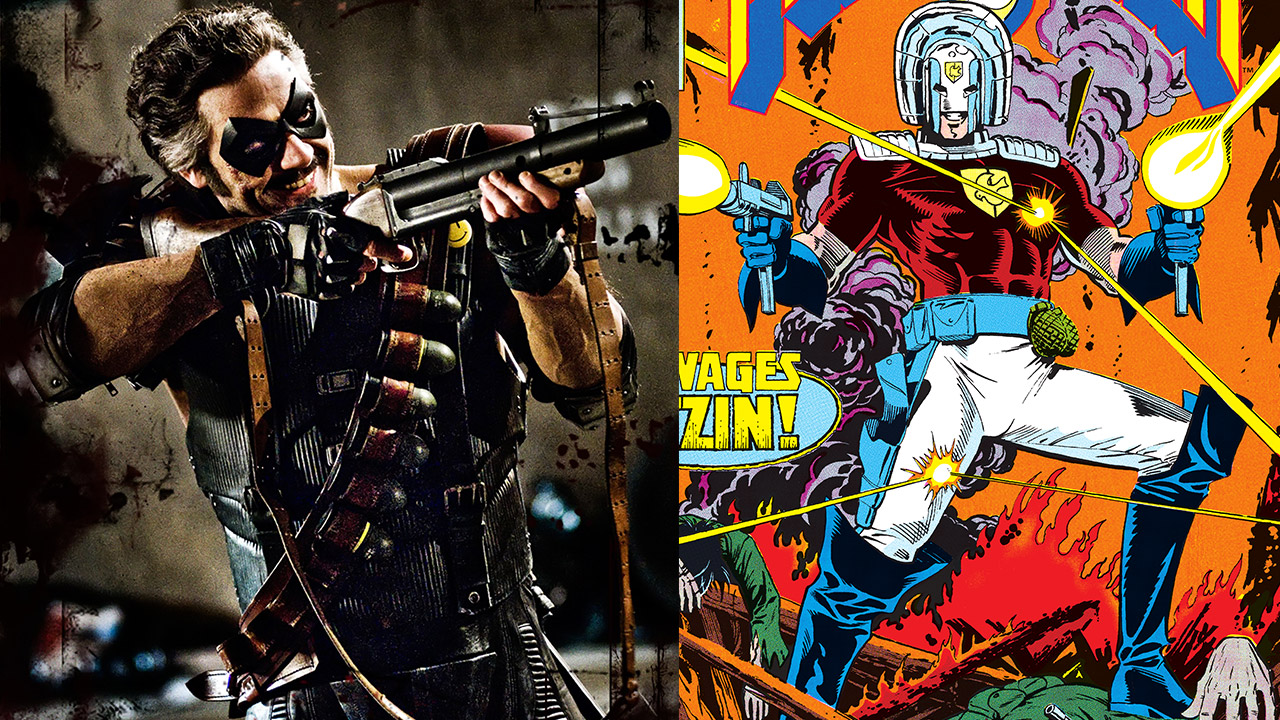 The Comedian is only in Watchmen for a moment- outside of flashbacks, anyway-  so perhaps it’s fitting that he correlates to one of the more obscure Charlton characters: a super commando by the name of Peacemaker, “the man who loved peace so much… he’d kill for it!” Like The Comedian, The Peacemaker’s name is largely ironic, as one of the more violent paramilitary characters on the Super Hero scene. It was a common archetype in the time that Watchmen was written, and one which would only grow in the decade to come. Like Peacemaker, The Comedian was a character who rejected the pop-culturally perceived innocence of the comic book medium, becoming a monster of his own making.

THE OTHER DIRECTION: Peacemaker was the last of the Charlton Crew to find his footing, in a 4 issue series by pre-Morrison Doom Patrol writer Paul Kupperberg. He was also the first to flare out, not seeing much action until he was redrafted as a seasoned mentor for Jaime Reyed in the 2006 Blue Beetle series. And today, you can find him in your local comic book store backing up issues of Jeff Lemire and Keith Giffen’s ongoing reboot of Inferior Five. 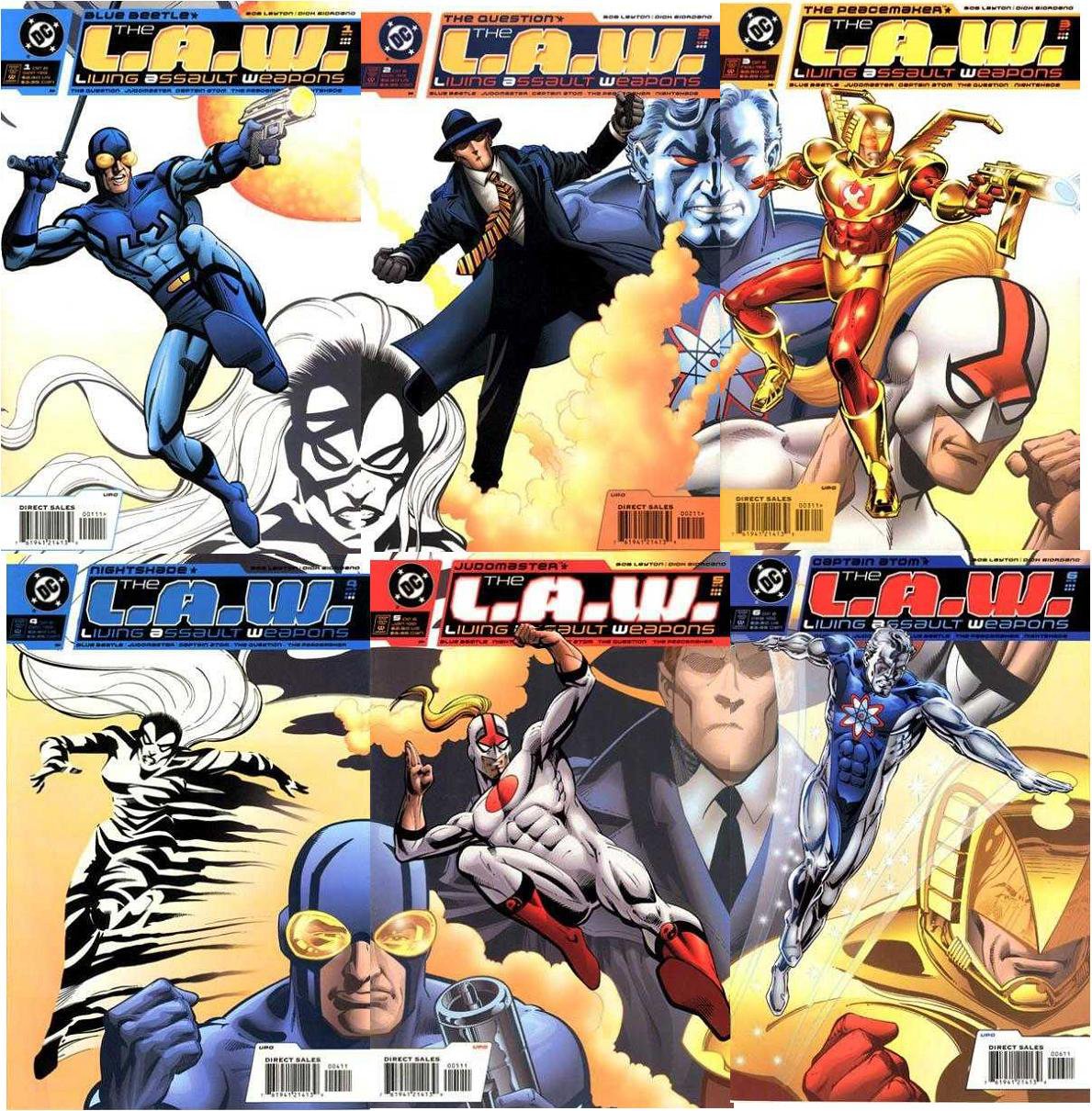 Captain Atom, The Question, Blue Beetle, Nightshade, and Peacemaker all went on to appear side-by-side one last time in the ‘90s, in a series titled L.A.W.: Living Assault Weapons. But while this event is an interesting curiosity for comic book historians, Watchmen itself remains the most significant treatise on what happens when these usually independent Super Heroes find themselves co-existing: even if it’s not really them in name. The question of who watches the watchmen stands to this very day. But who were The Watchmen watching? The answers are all right here.